Locate (or submit) Places connected to the Sky 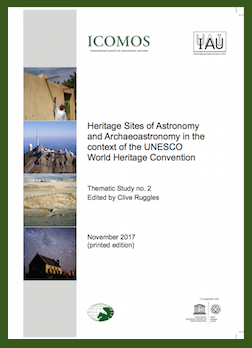 Following the publication of the first ICOMOS–IAU Thematic Study (“TS1”) in 2010, the IAU requested its Working Group on Astronomy and World Heritage to develop particular case studies in greater detail, so as to explore further and clarify some of the key issues highlighted in TS1 that can arise in the particular case of astronomical heritage sites. In doing so, it would further encourage and aid State Parties in the development of nominations. In collaboration with ICOMOS, nine “extended case studies” were duly prepared for discussion at a workshop held at Mount Cook, New Zealand, in June 2012 and presented at the IAU General Assembly in August of that year.

A particularly complex issue is the recognition and protection of dark skies. Dark sky areas cannot in themselves be considered as potential World Heritage Sites, but a thematic chapter by Michel Cotte considers a range of ways in which dark sky values can be interrelated with broader cultural or natural values of a place and thereby contribute to its overall cultural or natural value and potential OUV. Other issues explored in TS2 include the need to balance archaeoastronomical considerations in the context of broader archaeological and cultural values; the potential for serial nominations, for example among groups of monuments whose astronomical significance is only evident from the group as a whole; and management issues such as preserving the integrity of astronomical sightlines through the landscape.

The case studies included in TS2 include seven-stone antas (prehistoric dolmens) in Portugal and Spain, the thirteen towers of Chankillo in Peru, the astronomical timing of irrigation in Oman, Pic du Midi de Bigorre Observatory in France, Baikonur Cosmodrome in Kazakhstan, and Aoraki–Mackenzie International Dark Sky Reserve in New Zealand. A case study on Stonehenge, already a World Heritage Site, focuses on preserving the integrity of the solstitial sightlines.

As for TS1, an international team of authors including historians, astronomers and heritage professionals is led by Professor Clive Ruggles for the IAU and Professor Michel Cotte for ICOMOS, who provide introductory and concluding discussions.

See the TS2 contents page for further details, and to download the entire volume or individual chapters or case studies.

A preliminary version of TS2 was presented at a side-event at UNESCO’s 2015 World Heritage Committee meeting In Bonn, Germany.

“Heritage Sites of Astronomy and Archaeoastronomy in the Context of the UNESCO World Heritage Convention: Thematic Study no. 2” was published as an e-book on 30 June 2017. It is a is joint publication by ICOMOS and Ocarina Books . This e-book version is available for free (see the TS2 contents page).

A limited printed version was published on 30 November 2017. Copies are available for purchase from Ocarina Books: please This email address is being protected from spambots. You need JavaScript enabled to view it..

The contents of TS2 form the basis of many of the full case studies available on the Portal to the Heritage of Astronomy, where they are being gradually enhanced and updated.