The interplay between the tangible and the intangible is an inherent and fundamental aspect of astronomical heritage, as indeed it is of science heritage in general. The same is also true, to some degree, of all properties on the World Heritage List.

In heritage terms, we can identify three main aspects of the 'astronomical system' associated with a given place and thus contributing to the value of a site:

Each of these three main categories gives rise to both tangible evidence and intangible heritage. Following the World Heritage Convention, the tangible evidence must be divided into two subcategories: movable heritage and immovable heritage. Immovable heritage is central to the application of the Convention but movable heritage is not, strictly speaking, covered by the Convention. (The term ‘immovable’ is used in a juridical sense, to mean something that has not been globally displaced from its position in the soil, in other words something that has permanent links with the architectural framework of its construction or of its natural foundation. In this sense, it actually means 'fixed in its original position' or 'not moved [yet]', and for this reason we generally use the term 'fixed' to describe this type of heritage on this portal. On the other hand, 'movable' has its common-sense meaning.)

While incomplete and begging many issues, such as the imprecise boundaries between certain types of evidence, the table suffices to highlight the important question of the relationships between material evidence, as the main focus of the application of the World Heritage Convention at the present time, and intangible heritage, as evidence for the value of material manifestations. Within the tangible category, we must also examine the relationships between fixed (immovable) and movable objects: again, only the first of the two is currently relevant to the World Heritage Convention. 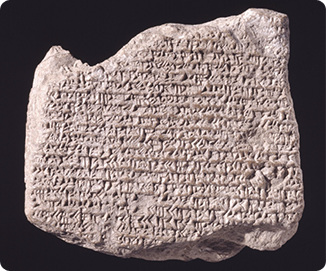 Astronomical diary from Babylonia, 2nd century BC. Photograph © Trustees of the British Museum

The various categories of astronomical heritage—‘tangible immovable’, ‘tangible movable’, and ‘intangible’—are interrelated in different ways in different contexts. Despite the fact that the World Heritage Convention focuses on tangible immovable heritage, the essential evidence for certain types of early astronomy is almost exclusively in the other forms. Our knowledge of astronomy in ancient Mesopotamia, for example, comes exclusively from movable cuneiform tablets, together with its intangible legacy in the astronomy of other cultures.

In other cases, different forms of heritage may tend to relate to different aspects of the astronomy. The classic example of this is ancient Greece), where the historical documents relate mainly to the development of mathematical astronomy by an elite of scholars, while much of the material astronomical heritage (e.g. the configuration of ancient temples) relates to astronomy in the service of religion practiced by the people at large. Since the first of these forms a crucial part of the history of modern scientific astronomy, the archaeoastronomical evidence is largely ignored by historians of astronomy. However, it is no less important from a cultural astronomy (anthropological) perspective. Indeed, while a classical heritage approach focused on the fixed heritage could redress the balance, it might well overemphasize the latter.

Islamic astronomy presents another balance between the availability and state of conservation of tangible fixed evidence and other forms of heritage relating to crucial developments in astronomy. Based on the available historical sources, we can create quite an accurate account of several aspects of the development of astronomy in the Islamic world during the 12th to 16th centuries, and we know that it provided a vital link between ancient Greek astronomy and the subsequent development of scientific astronomy in renaissance Europe and in Mogul India. However, despite the huge importance of the Islamic observatories in the development of mathematical and observational astronomy during this period, none has survived intact. In other words, the fixed heritage that not only bears witness to but fundamentally underpinned these developments has largely disappeared. In this context, the partial survival of two major observatories (Maragha and Samarqand) that demonstrably played a very significant role in these developments is all the more fortunate. This must surely influence our assessment of their very high value as astronomical heritage, an importance that could come into play, for example, when facing authenticity and integrity concerns.