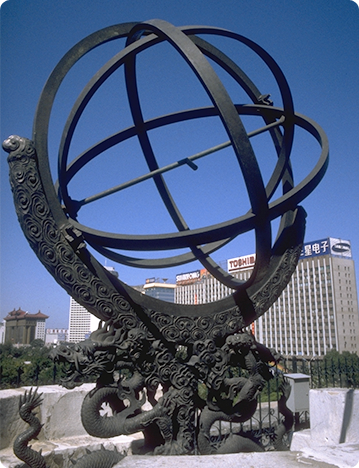 In order to establish the components of a property and their significance in relation to astronomy, it is essential to recognise an astronomical heritage site as a ‘monument of science’, and hence as an integrated system. This means that fundamental links are understood to exist between the following different classes of heritage:

As a consequence, the creation of an inventory taking a global approach must take into account not only the material evidence of the property (A) but also (in relation to B and C) knowledge, outputs, applications in society, etc.

The value of fixed heritage (A), which is within the scope of the convention, together with movable heritage (B), is critically dependent upon intangible knowledge (C). The material evidence may be modest in itself (although substantial enough to clearly demonstrate the ideas with which it is associated) but may have exceptional value as a result of the context of ideas that derives from people’s understanding of the sky and celestial events. In other words, (A) derives its meaning in the light of (C), and is intrinsically linked to (C).

In order to identify our most exceptional astronomical heritage, it is important to recognise the continual interchange between the ‘tangible’ and ‘intangible’ categories, which is part of the fundamental paradigm that constitutes the scientific process in general.

Integrity must be understood as the completeness of a monument of science. The question, in determining the integrity of a site and the material evidence relating to the attributes that establish its value, is whether we have enough material and intangible information to give us a comprehensive view of the property and of its historical functions.

The question of authenticity raises particular issues in the context of science heritage. Change, improvement and innovation are positive attributes of science and technology in general, and of astronomy in particular, and so are likely to add to, not detract from, the value of the associated heritage. The 1994 Nara conference on authenticity (see Operational Guidelines, annex 4) underlines the need for a comprehensive approach, considering the property first in its global cultural context and second in relation to a detailed description of its attributes. The scientific use of a property gives rise to a specific form of the definition of authenticity and this necessitates a careful study of each component of the value of the site, in terms of its use and associations as well as its form.

The authenticity of a ‘fact’ is also linked to the credibility of the ‘fact’ and its interpretation. In other words, it is linked to the degree to which the ‘fact’ has been proven according to current standards in the discipline concerned—e.g. history, archaeology or archaeoastronomy.

A serial approach may be appropriate but it is not an obligation. Each State Party is free to choose its own approach towards its astronomical and archaeoastronomical heritage. A serial approach would need to highlight the various similarities and complementarities that exist between the different sites within the ensemble, as well as highlighting the different qualities that attest to the significance and value of the ensemble as a whole. On the other hand, a single outstanding example may provide a better demonstration of value, and potentially of Outstanding Universal Value (OUV) in the sense of the application of the Convention to inscribe a given property on the World Heritage List.

The credibility of dossiers is crucial for the future of the implementation of the Astronomy and World Heritage Initiative within the framework of the World Heritage Convention. It is important not only for the World Heritage Committee but also for the scientific community in general. For this reason, we consider in some detail the question of how to create a credible dossier for an astronomical heritage site.

Return to “Preparing a nomination dossier”