With a budget of only 65.0000 CHF, but with more than 2,000 working hours put in by volunteers, the Astronomische Gesellschaft Winterthur established the Eschenberg Observatory in 1979. Initially its facilities were very spartan, but the observatory has evolved into an established regional cultural and educational institution—and also into a well-known observing station for near-earth asteroids and comets.

Located in a remote forest glade in a large woodland directly south of Winterthur, Switzerland 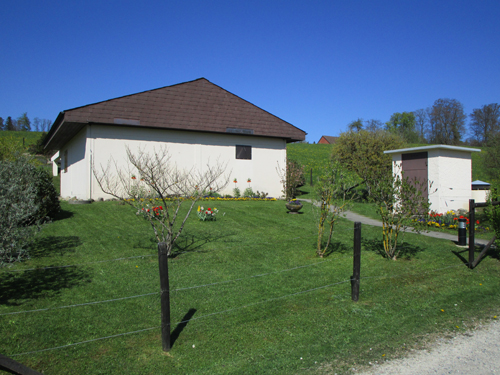 The observatory, as viewed from the adjacent footpath. © Eschenberg Observatory

The location of the observatory, in a large forest glade on the southern slope of the Eschenberg hill, means that it is shielded to a considerable extent against light pollution from the city of Winterthur to the north. while to the east, south and west, there has been only a small population within a radius of about 10 km (but see “Main threats or potential threats” below for recent developments). This has allowed the observatory to enjoy a rather well preserved dark sky, while still being relatively accessible to the general public from the Winterthur area.

Over the observatory’s years of operation, the equipment has been continually upgraded and replaced, resulting in a state-of-the-art infrastructure. 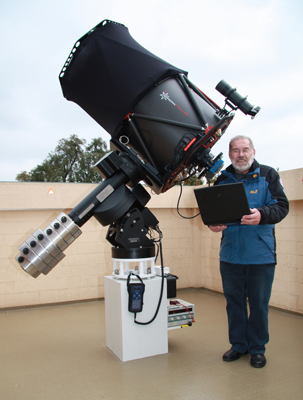 The Heuberger Astrograph is mainly used to observe near-earth asteroids. The observatory has provided over 22,000 high-precision position measurements to the Minor Planet Center in the USA. 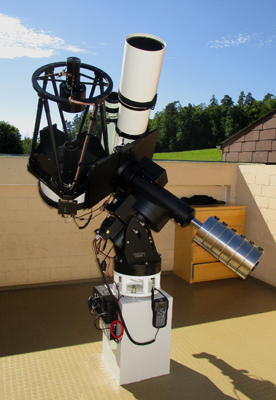 The mounting on the western observation platform hosts a number of instruments: an RC telescope with 400mm/f8 mirror; a 105mm/f7 refractor; and the 203mm TMB refractor with a focal length of 1400mm. This instrument has an especially strong magnification, therefore impressing visitors with its brilliant images of the night sky. It hosts a three-part apochromatic lens of the highest quality, built in St. Petersburg, Russia.

Older instruments, not currently in use

The Friedrich Meier telescope and the TMB refractor 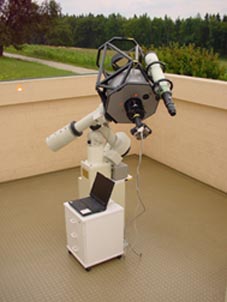 The 402mm “Friedrich-Meier” telescope, a so-called Hypergraph (Cassegrain with double-lens corrector) is the main instrument of the observatory. With a focal length of 2,360 mm and an aperture ratio of f/5.9 this instrument is very fit for purpose. It is also mounted together with a second instrument, a 105mm refractor with an apochromatic lens and 700mm focal length. In combination with the available electronic cameras (since 2005 there has been an “Apogee” U47 with a newly designed Marconi processor and USB connector) this instrument can collect light from objects as faint as mag. 20.0.

Since April 1979 the observatory has provided astronomical education and guided evening sky observations for the general public. As of 2018, the visitor count is approaching 100,000.

The voluntary team (currently five people) offers free tours once a week on Wednesday evenings, and has done so since 1979. Private (paid) tours are also possible for groups. The researchers use the observatory to monitor asteroids and minor planets.

The team not only provides the guided tours, but also maintains the instruments, the building and the surrounding garden.

As a private property owned by the Astronomical Society Winterthur, the observatory receives a modest annual financial contribution from the City of Winterthur, and relies upon private and corporate donations for major renovation projects.