Stonehenge Aotearoa is a modern adaption of Stonehenge that is used mainly as a teaching tool both for ancient and modern astronomy. Since it is at a different latitude and longitude from the original Stonehenge, some measurements had to be changed to preserve certain astronomical properties. Aotearoa is the Māori name for New Zealand.

Although similar in size and appearance to the Stonehenge on Salisbury plain, Stonehenge Aotearoa is not a replica. It is a complete and working structure designed for its precise location in New Zealand. Aotearoa is the Maori name for New Zealand.

Unlike Stonehenge in England, which was built using sarsen stones, the pillars and obelisk at Stonehenge Aotearoa are hollow structures covered with concrete on a reinforced concrete foundation. The henge is a built structure, to cope with the number of earthquakes experienced in New Zealand. 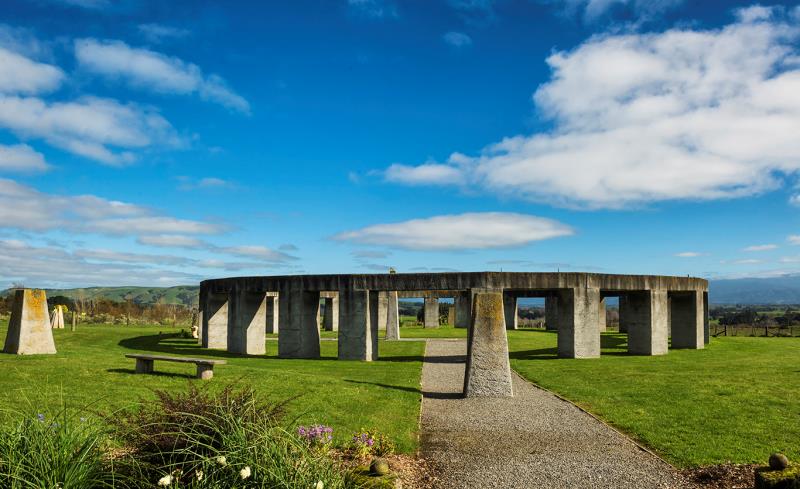 Stonehenge Aotearoa is aligned in accord with that of Pre-European Maori meeting houses. It follows the cosmology of ancient Maori astronomy which is also taught at the henge. 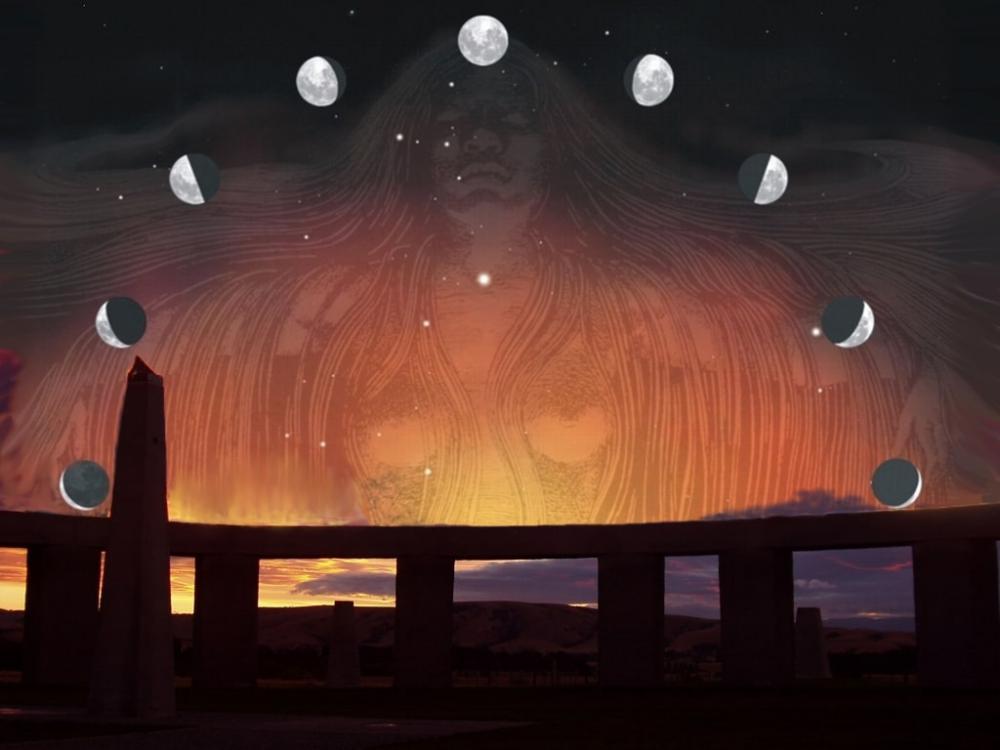 Stonehenge Aotearoa consists of 24 upright pillars, each 3 metres tall, that form a circular structure with a diameter of 30 metres. The 24 pillars are placed in positions where they do not obscure the rising of important stars, so they are not evenly spaced around the henge.

The pillars are connected by lintels, which are completely level. The height of the top surface is at the level where there is no light refraction (bending of the light due to the thickness of the atmosphere), so you are looking at the stars where they actually are.

The entrance to the stone circle is a causeway that has standing stones on either side. Two of these are large, carved pillars that form the so called Sun Gate. The sun can be seen rising between these pillars on the morning of the two equinoxes (Spring and Autumn).

A compass rose and a 5 metre obelisk mark the centre of the structure. The obelisk near the centre can be used to identiy the location of the south celestial pole. The obselisk also casts a shadow on a 10 metre tiled analemma, located south of the obelisk along the meridian. 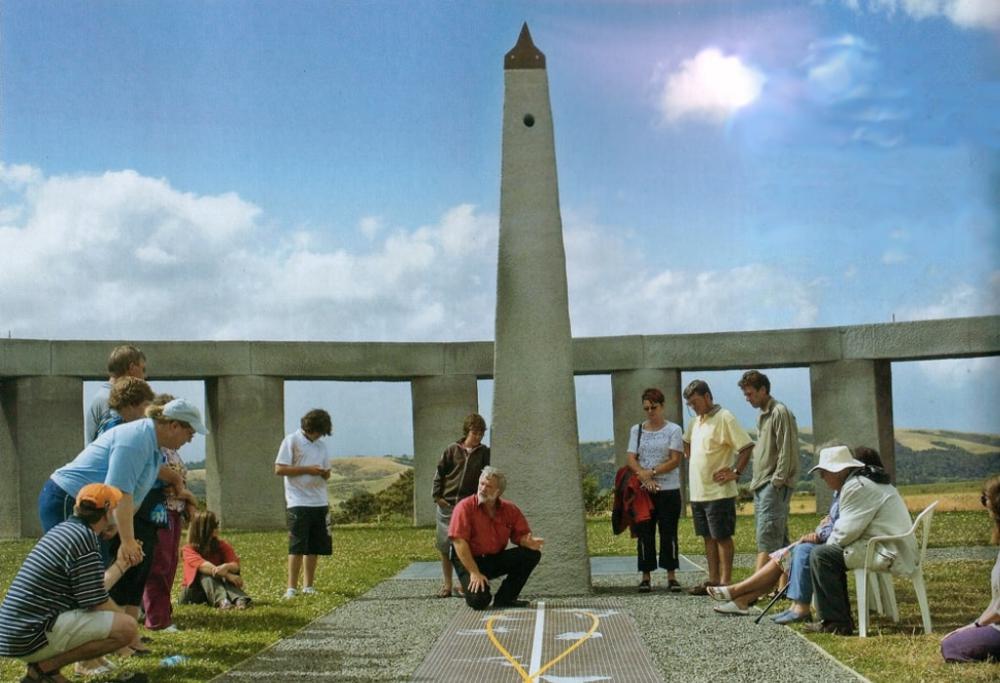 Outside the stone circle are six heel stones. Seen from the centre of the structure, these stone mark the rising and setting points of the Sun at the solstices equinoxes. 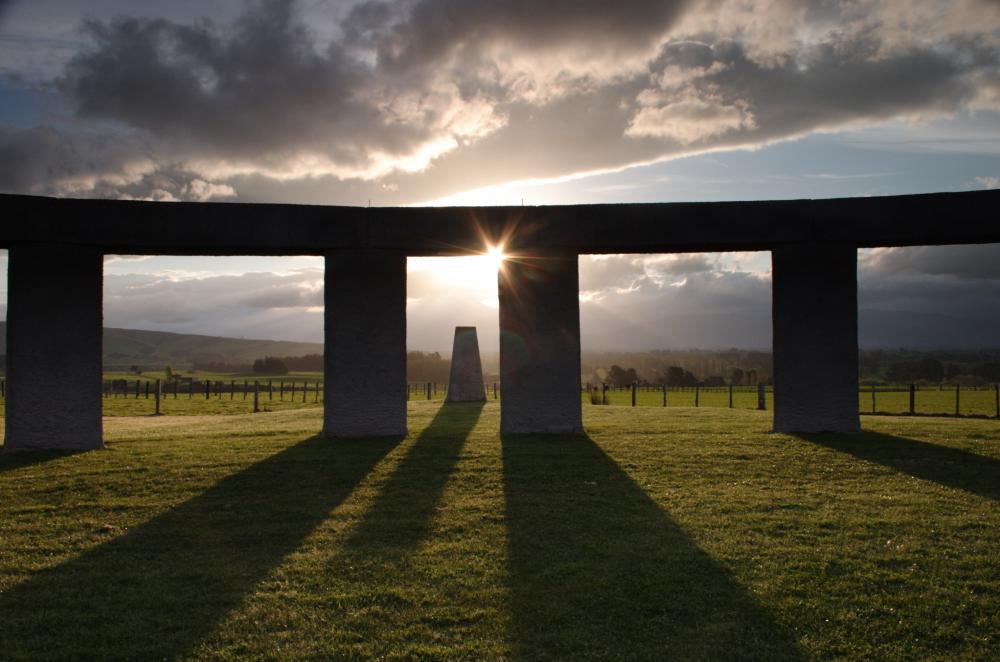 To the south of the structure are seven stones that form a sculpture representing 7 female figures, the Seven Sisters (Pleiades), which have been an important calendar marker for several cultures, including the Maori, who called them Matariki and used their first rising to mark the beginning of the new year.

Stonehenge Aotearoa was built by 150 members of The Phoenix Astronomical Society with support of the Royal Society in New Zealand in 2003 and 2004, and opened in February 2005.

Stonehenge Aotearoa is a teaching tool for teaching both ancient and modern astronomy to school groups and general public. It is also a venue for musical, dramatic, astronomical (solstice, equinox and significant dates and celebrations). Guided tours are conducted regularly.

The henge is on private land owned by the operators, who want to place the land under a trust or similar legal structure for the future.