Certain natural environments are intimately connected with cultural interests in astronomy, and bear witness to such activities throughout the ages. This applies to the visible landscape where, for example, points on the natural horizon mark the observed rising and setting points of celestial bodies. But it is particularly true of the dark night sky itself, which can preserve links with the perceived cosmos that have existed since time immemorial.

Cultural and natural heritage relating to astronomy—landscape and sky

The Pnyx is a place significant for the history of astronomy because historical records attest that it was the place from which the Greek astronomer Meton made observations of the solstice in the 5th century BC that led to his discovery of the calendrical cycle now known as the ‘Metonic cycle’. There are no tangible remains, fixed or movable, bearing direct witness to Meton’s observations. However, Meton’s observations may well have made use of the visible horizon (formed by a hill 3km away). In this sense, the natural landscape formed part of the ‘instrument’ and so directly forms part of the astronomical significance of the place.

The same is true of the many prehistoric and historical constructions aligned, for example, on the horizon rising or setting positions of the sun, such as Stonehenge in the United Kingdom or the seven-stone antas of Portugal and Spain, the appropriate horizon point being marked in some cases by a natural feature such as a distant hill-slope or mountain summit (as at Atituiti Ruga, Mangareva, French Polynesia). It would be misleading to view most of these constructions as observing ‘instruments’, since that was not their main function, but it is true to say that the alignment—the feature that ‘connects’ the human monument to the sky and contributes to (or in some cases, constitutes the totality of our knowledge of) its significance in relation to astronomy—links the human construct and the surrounding natural landscape—doing so in an even more specific way when a horizon ‘foresight’ completes the alignment. It follows that the natural landscape, and in some cases specific features within it, must in a very real sense be considered as contributing to the value of the monument, implying, for example, that Management Systems should address to question of keeping the natural landscape intact and the sightline unobstructed. At the same time, natural sites used for astronomical purposes (both in the present and in the past, where there is clear evidence to support the assertion) could form elements of ‘cultural landscapes’. 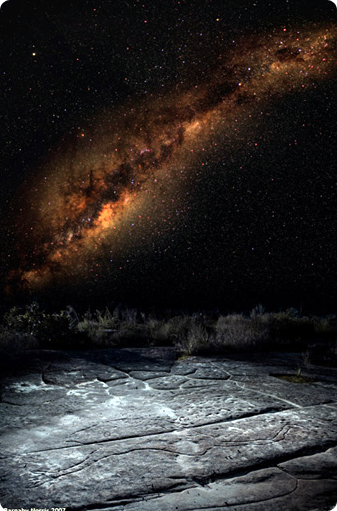 The emu in the sky known to Australian Aboriginals, above a probable rock-art depiction of it. Photograph © Barnaby Norris

A related issue is the removal of a monument, even for its own protection, as at Abu Simbel or, potentially, at Nabta Playa in Egypt. If the monument contains connections with the surrounding landscape, such as alignments, then its removal may have stronger implications than simply transforming it from fixed to movable heritage, since such connections will be destroyed, thus also removing an important (and perhaps the only) aspect of its value as astronomical heritage and thus destroying its integrity.

Human constructions incorporating astronomical alignments are also, of course, ‘connected’ in a cognitive sense to the astronomical body in question: this connection was periodically ‘revealed’—reaffirmed visually—when the sun, star, etc actually rose or set in the alignment. Light-and-shadow ‘hierophanies’, as at the Pantheon in ancient Rome or the Baptistery of Parma in medieval Italy, represent another instance where a direct connection between a human construction and a celestial body is periodically ‘made physical’. It is also true that in a more general sense all astronomical heritage sites have a connection to the very sky to which they related.

Given that an important aspect of the heritage of many ancient and historical sites is the observation of certain naked-eye astronomical phenomena, the possibility of actually observing those phenomena today is a relevant consideration in valuing and preserving that heritage. Since many sites relate to night-time observations, a consideration of obvious importance in this respect is the visibility of the dark night sky. In this sense, a dark sky is an aspect of the quality of the natural environment of a cultural site. in terms of scientific value (and cultural value in general) connected with the history of astronomy, it is quite valid to recognise the absence of light (pollution) as a prerequisite for the satisfactory observation of the night sky.

This extraordinary picture shows the imposing shape of the emu in the sky known to certain groups of Australian Aboriginals. Below it is a probable rock art depiction of the same celestial emu. It is necessary to experience a truly dark night sky in order to appreciate the astonishing visual impact of dark cloud constellations such as this.

In dark night sky areas, the ability to see natural starlight preserves the visual links to the sky that have connected humankind to the cosmos throughout history. There has been increasing recognition in recent years of the crucial importance of maintaining dark skies in various places around the world, and the Starlight Foundation has worked since 2007 to find ways to recognise and protect such heritage, for example developing the concept of a Starlight Reserve.

Nonetheless, in the two ICOMOS–IAU Thematic Studies (no. 1—2010; no. 2—2017) it is recognized that dark skies relate strongly to other aspects of the heritage of astronomy, and the study highlights various ways in which dark skies and light pollution issues can be highlighted in nomination dossiers for potential World Heritage sites. A way forward for those seeking to have such sites recognized and protected under the World Heritage Convention might be to explore the ways in which the dark skies associated with a site or landscape are intertwined with other aspects of astronomical heritage that could conceivably be recognized as of outstanding universal value. Such issues are explored in detail among the case studies and discussions on this web portal.

These questions are also linked to one of particular interest to professional astronomers: how can we protect dark skies at the world’s major optical observatories that are vital for cutting-edge astronomical research? For this reason, three such observatories—Mauna Kea observatory in Hawai‘i, the AURA observatory in Chile and the Canarian observatories in Spain—are all included as case studies within the Thematic Studies and on this portal.

The Thematic Studies also contain a case study on the Eastern Alpine and Großmügl starlight areas, places with exceptional naked-eye sky quality but with few or no direct cultural connections.

You can view more Dark Sky information and resources on our Dark Skies Information page.