Tycho’s observatories, Uraniborg and Stellaeburgum (Stjerneborg), on the Danish Island of Hven in the Øresund between Zealand and Scania (today Ven, Swedish).

Under the sponsorship of King Frederic II of Denmark (1534–1588), Tycho Brahe (1546–1601) built his observatory, called "Uraniborg", dedicated to Urania, the Muse of Astronomy (Wolfschmidt 2002a) on the Danish Island of Hven (today Ven, Swedish). It was the first time that a building was erected in Europe especially for the purpose of astronomical observations. 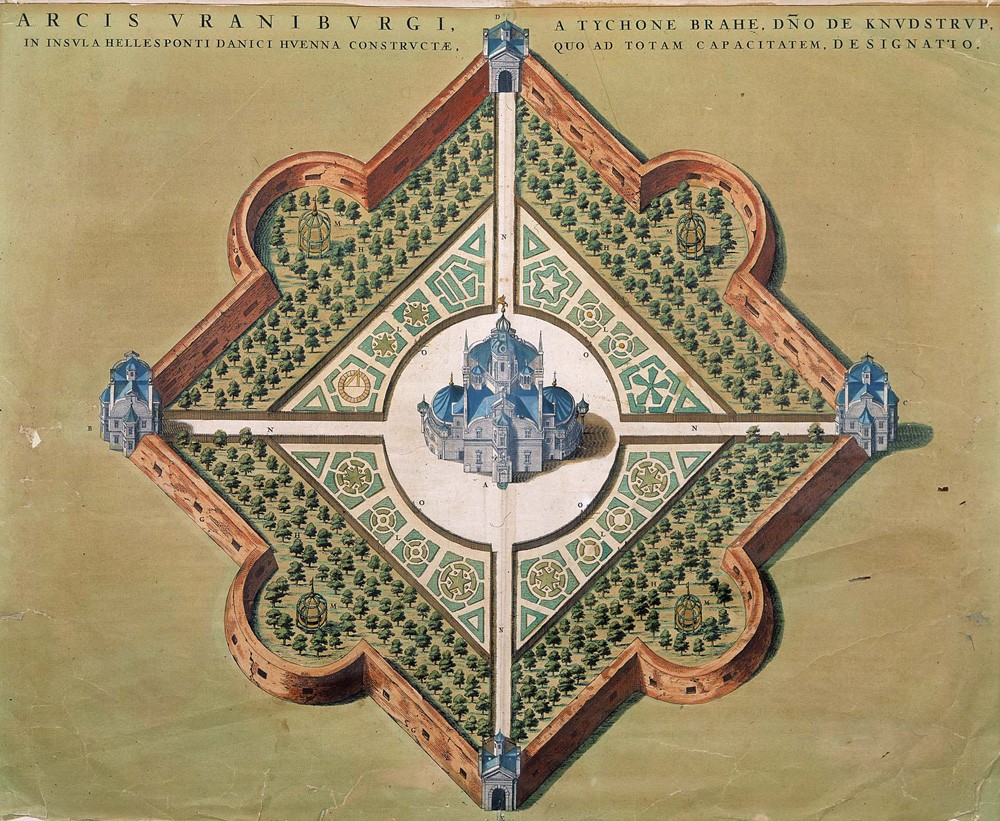 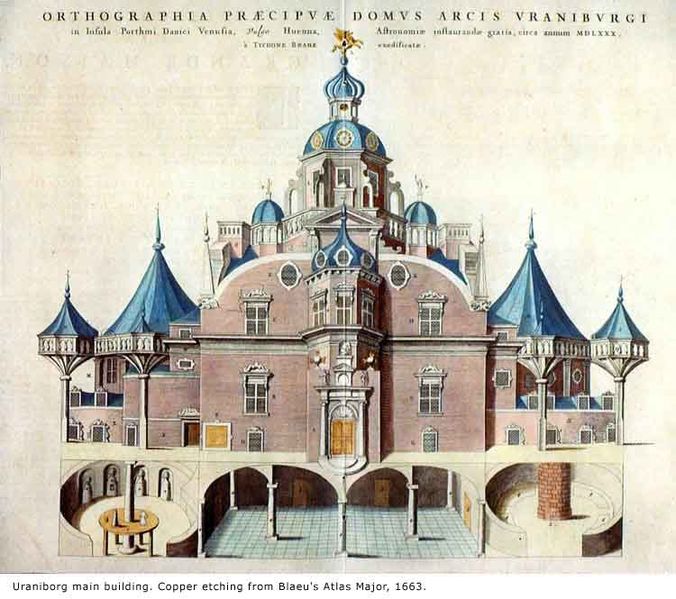 The brick building with sandstone and limestone frames was erected in 1576–1580 in the style of the Flemish Renaissance by the architect of the royal Danish court Hans van Steenwinckel der Ältere [Hans van Emden] (around 1545-1601) and the sculptor Johan Gregor van der Schardt (around 1530 - after 1581/91) in close cooperation with Tycho.

In the cellar was Tycho’s alchemical laboratory. The observatory measured 16m x 16m, with a 19m tower and two small round towers to the north and south of 6m diameter (with cone shaped roof), surrounded by galleries for the instruments.

The observatory is in the middle of the strongly geometrical Renaissance garden; in addition Tycho had a printing office and a water mill for making paper. 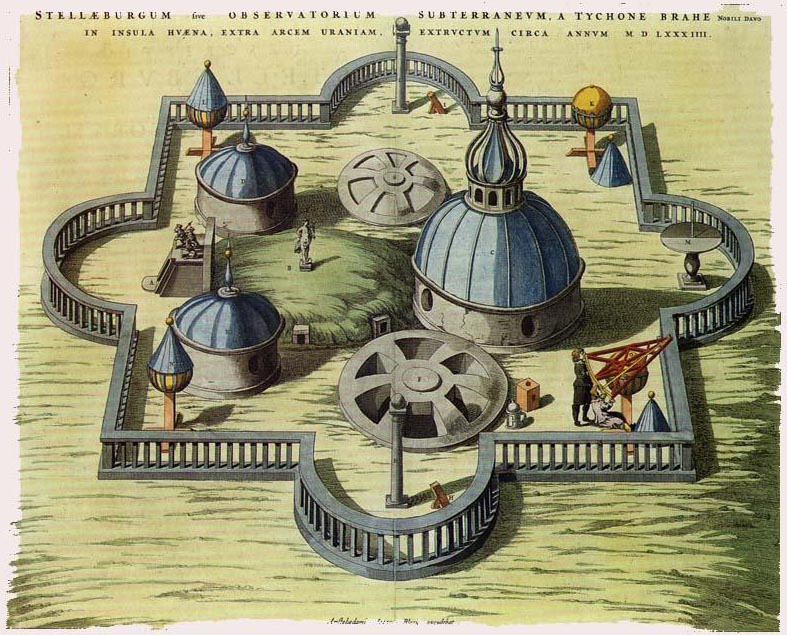 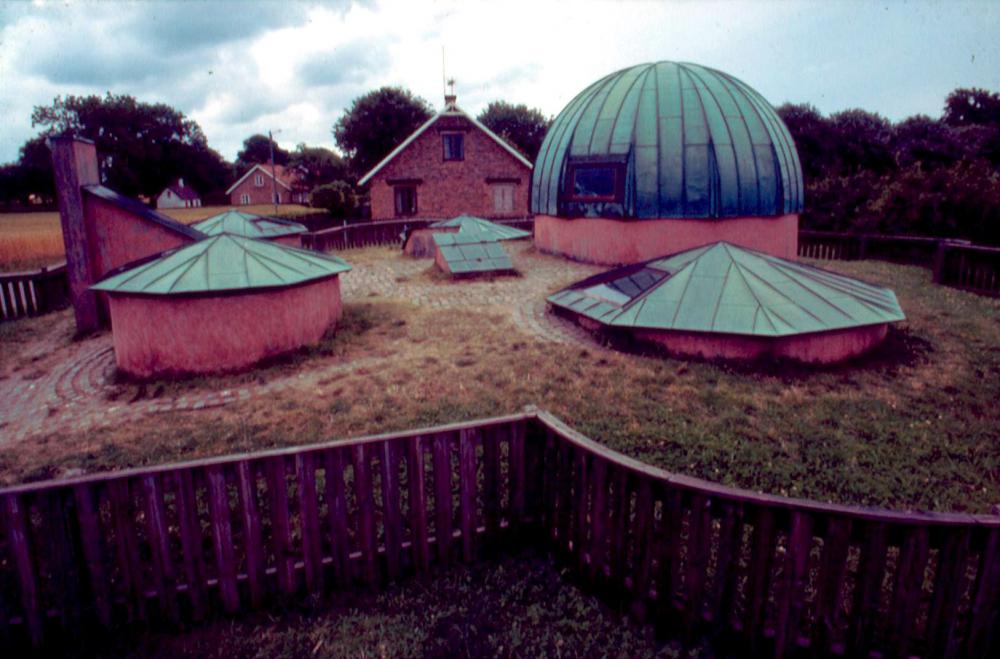 In 1584 Tycho founded a second observatory, Stellaeburgum (Stjerneborg), 80m to the south of Uraniborg. In its five round towers with conical domes, called "crypts" by Tycho, his instruments were well protected against the wind.

Very striking is the similarity of Tycho’s instruments - the triquetrum, armillary sphere, sextant and quadrant, as described in his Astronomiae instauratae mechanica (Wandsbek, 1598) - to those used in Islamic observatories by al-’Urdī in Marâgha observatory, or by al-Âmilî in Isfāhān and by Taqī al-Dīn in Istanbul observatory.

Tycho’s castle observatory Uraniborg was, at the end of the 16th century, an impressive advanced research centre both for studying astronomy and in respect of the innovative precise instruments. 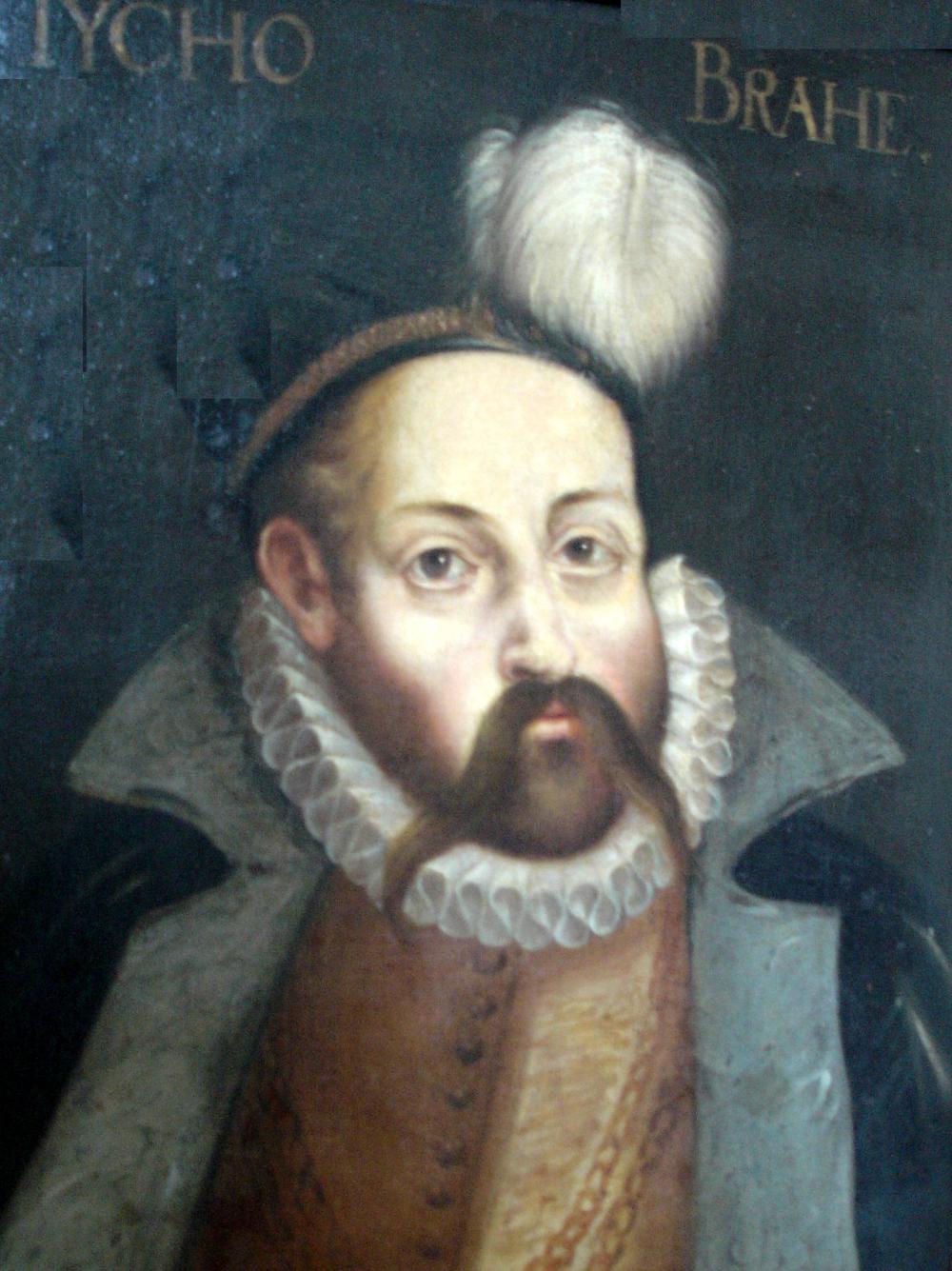 Tycho Brahe (1546-1601) was the most important observational astronomer until the invention of the telescope in 1608. From his astronomical observations, Tycho Brahe recognised the need to design and construct improved instruments. The question is whether tradition or progress prevails here (Wolfschmidt 2010). On the one hand, Tycho relied on the three important ancient instruments - the Quadrant, Triquetrum and Armillary Sphere - and rejected recent medieval developments such as the Astrolab and Torquetum; on the other hand he recognised the shortcomings and innovatively improved many features of classical instruments. 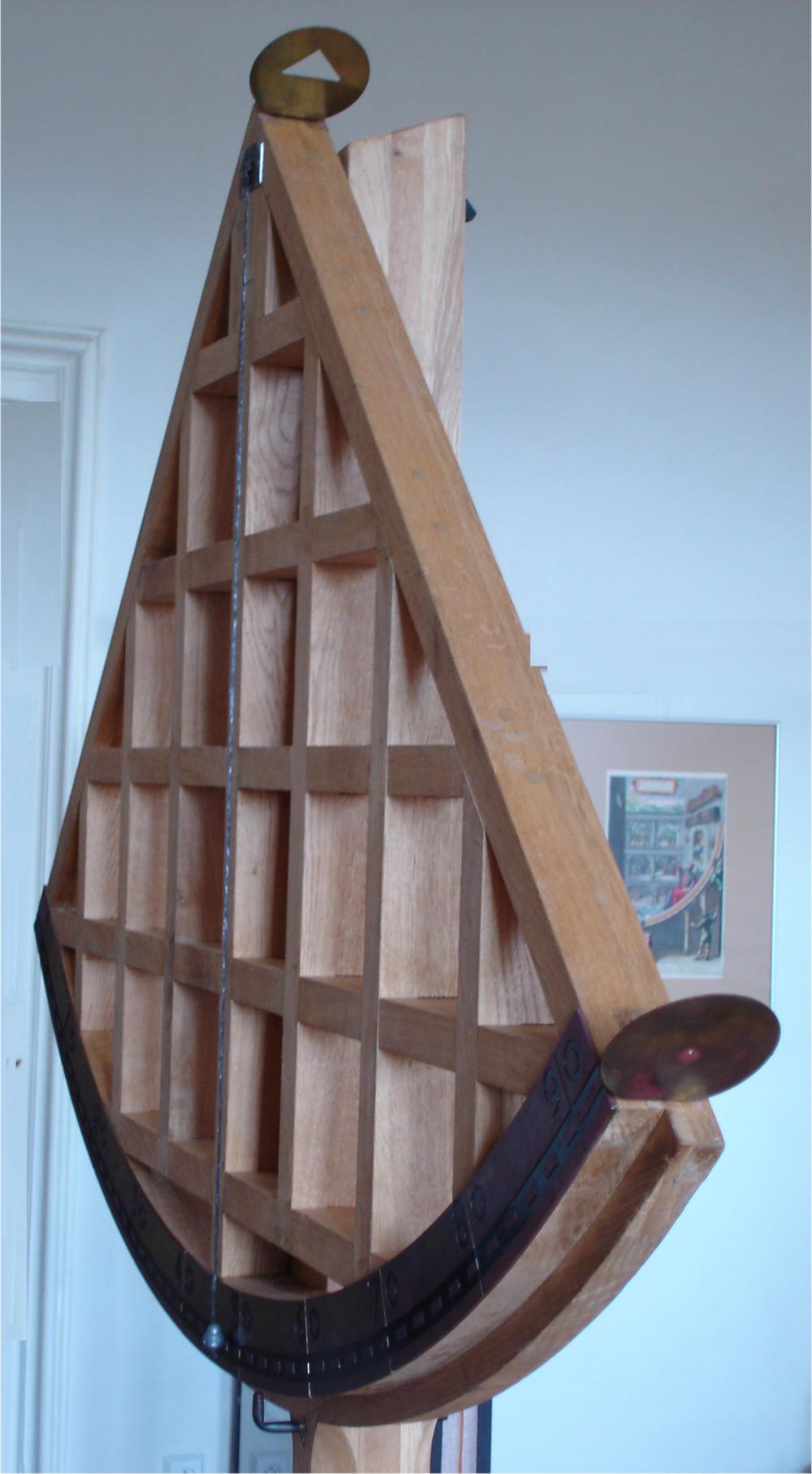 Particularly noteworthy is the creation of novel instruments (Large Mural Quadrant 1582, sextants, semicircles) and the development of new measurement and reduction methods. As part of his observations of the nova in 1572 and the comet in 1577, Tycho overrode the current Aristotelian ideas. On the other hand, he also interpreted the comet in a classical way (astrologically) as a negative omen. With his Tychonic world system, he tried to strike a balance between the ancient geocentric view of the world and the Copernican world system.

By constructing new instruments and devising new observing methods, Tycho succeeded in significantly increasing measurement accuracy. He increased the size of his instruments (e.g. a large wooden quadrant of diameter 5.4m and a mural quadrant); he used metal and masonry rather than wood; he modified construction techniques to achieve greater stability; to provide shelter from the wind, his instruments were in subterranean nooks; his instruments were permanently and solidly mounted; and, for better angular readings, he developed new subdivisions and diopters (Tycho used transversals to obtain the greatest possible angular resolution readings). His instrumental sights (diopters) were specially designed to minimise errors; he carefully analysed all the errors (Tycho’s aim was to reduce the uncertainty to less than one minute of an arc); he used fundamental stars for the first time; he preferred measuring equatorial coordinates directly instead of using the zodiacal system, i.e. using the equatorial armillary sphere instead of the zodiacal armillary sphere; he tried out a new measuring method with clocks and his mural quadrant (1582) for determining the right ascension; and he took atmospheric refraction into account.

Most of his high-accuracy instruments have been destroyed. Only two sextants, made by Jost Bürgi (1552-1632) and Erasmus Habermel (c. 1538-1606) around 1600, still exist in the Národní Technické Muzeum (NTM) [National Technical Museum] in Prague. A model of the wooden quadrant is in the round tower of the old observatory in Copenhagen.

But we have good descriptions of the instruments (half-circles of 2.3m radius; quadrants up to 2m radius including the mural quadrant; sextants up to 1.6m; armillary spheres of 1.5m radius and the great equatorial armillary sphere of 2.7m; triquetrum and celestial globe of 1.5m) in Tycho’s book Astronomiae instauratae mechanica (Wandesburgi 1598, Nuremberg 1602).

One of Tycho’s instruments was reconstructed in its original measurements in Oldenburg University and in the Steno Museum in Aarhus, Denmark. In Munich, in the Deutsches Museum’s permanent astronomy exhibition (opened in 1992), the Uraniborg observatory and its instruments are shown at a scale of 1:10. A similar but larger model (scale 1:5) from the workshop of the Deutsches Museum was given to the Technical Museum in Malmø, Sweden. Tycho’s later observatory Stjerneborg can be seen as a reconstruction on the island Hven (Ven/Sweden) with the original foundations for the instruments. 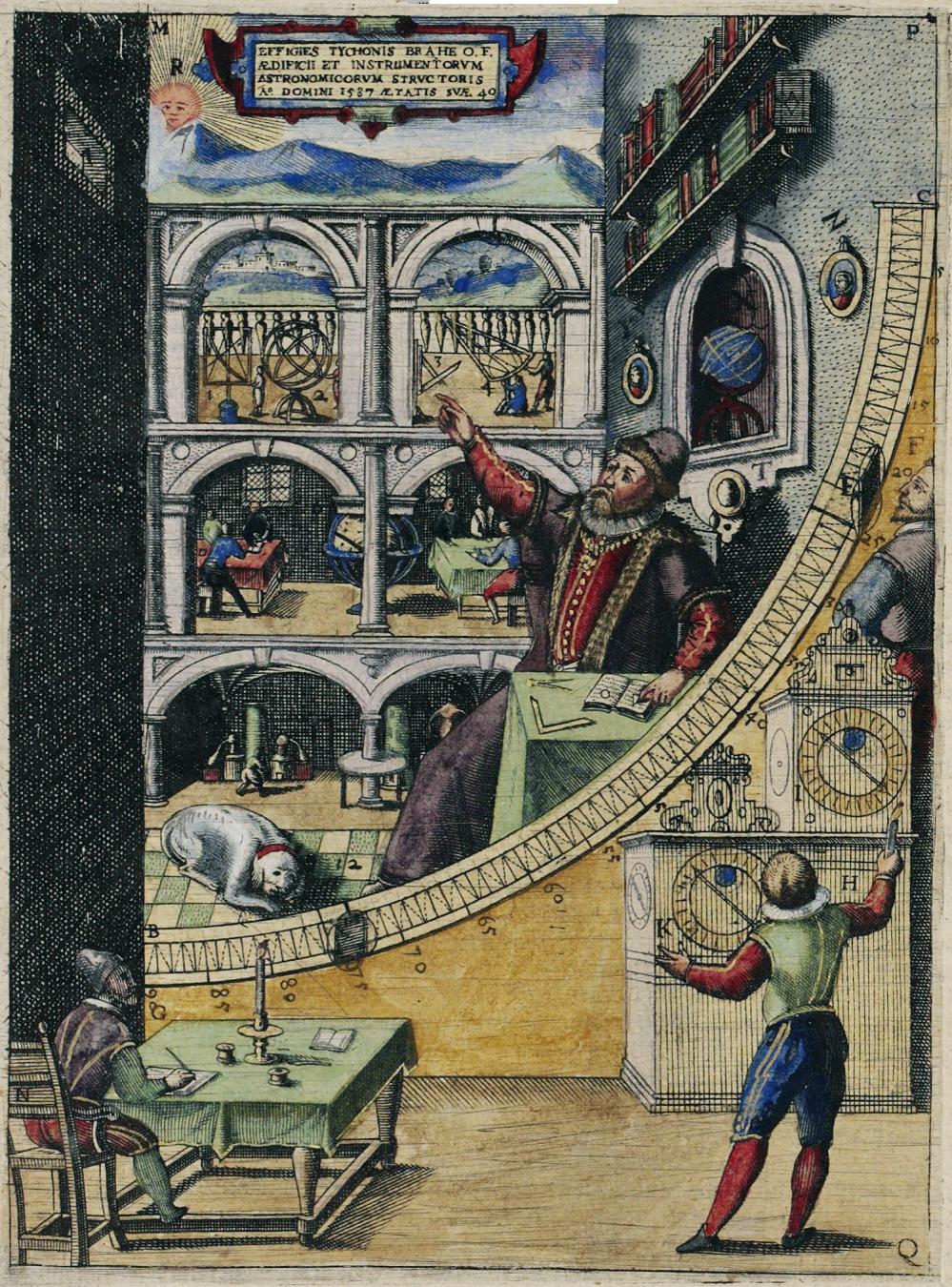 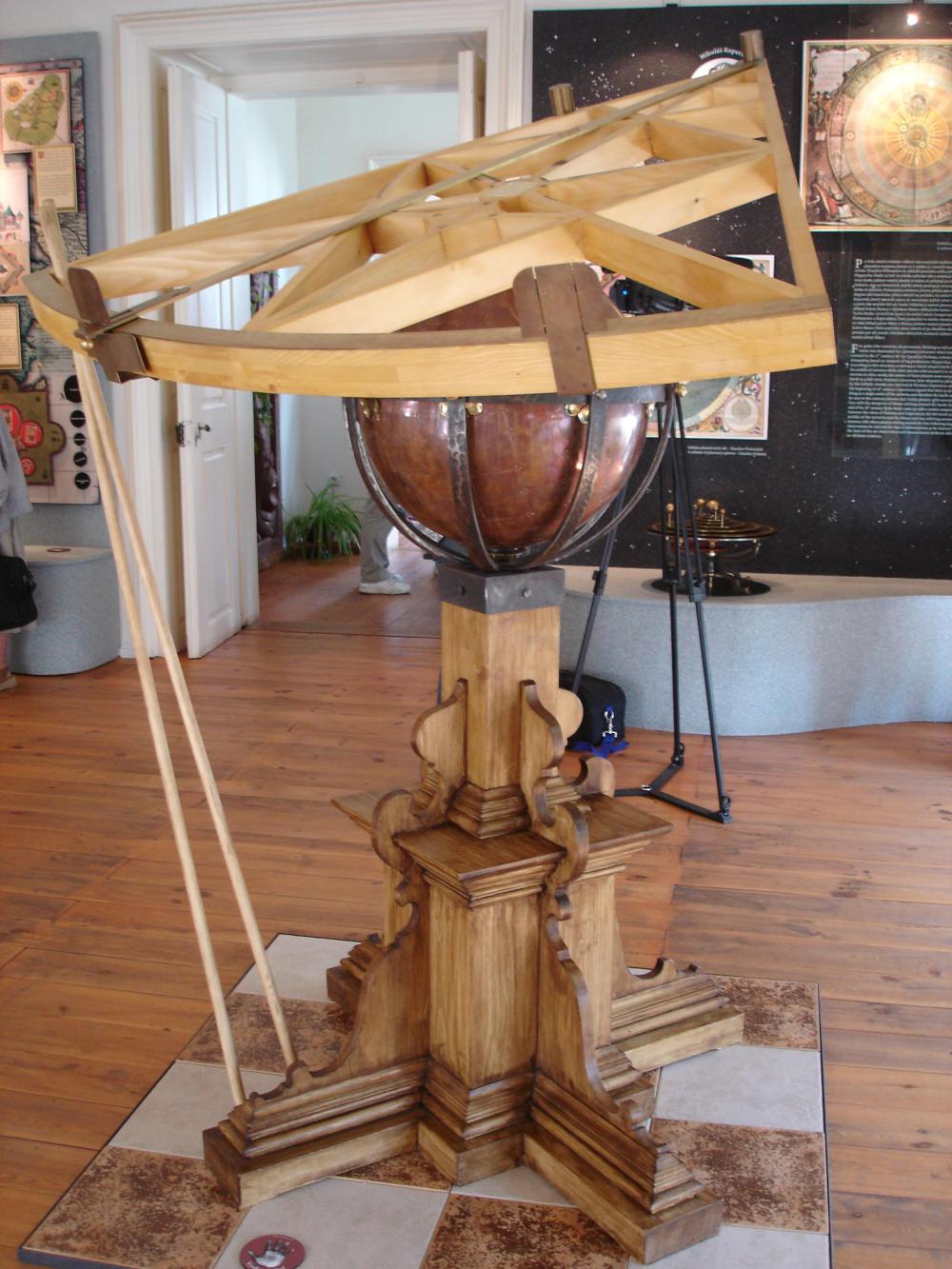 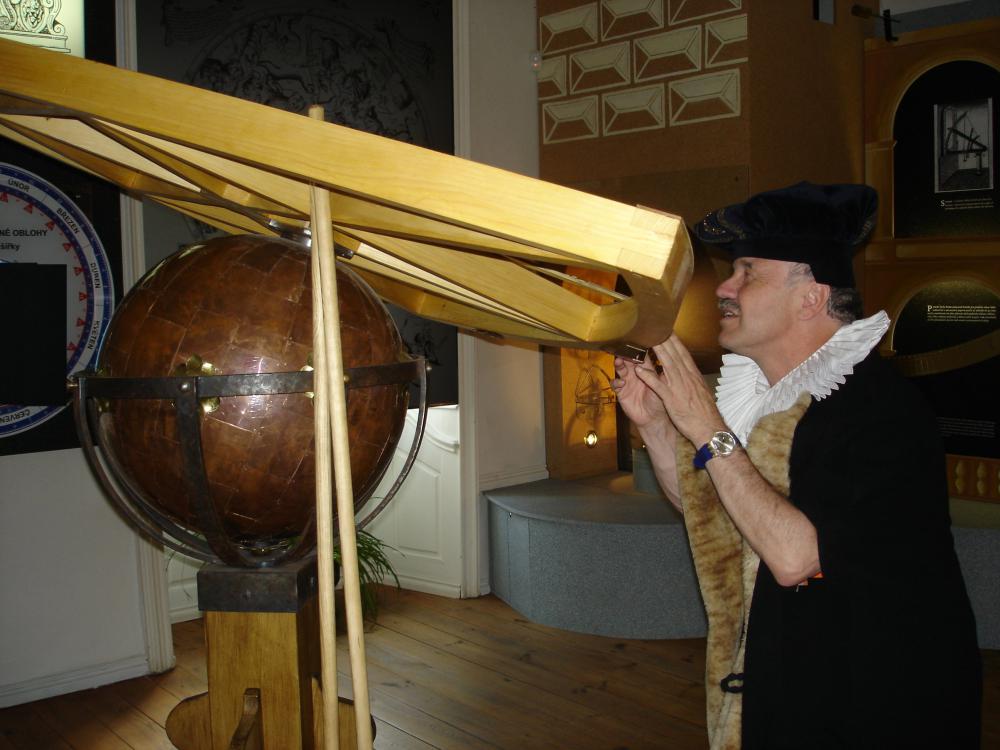 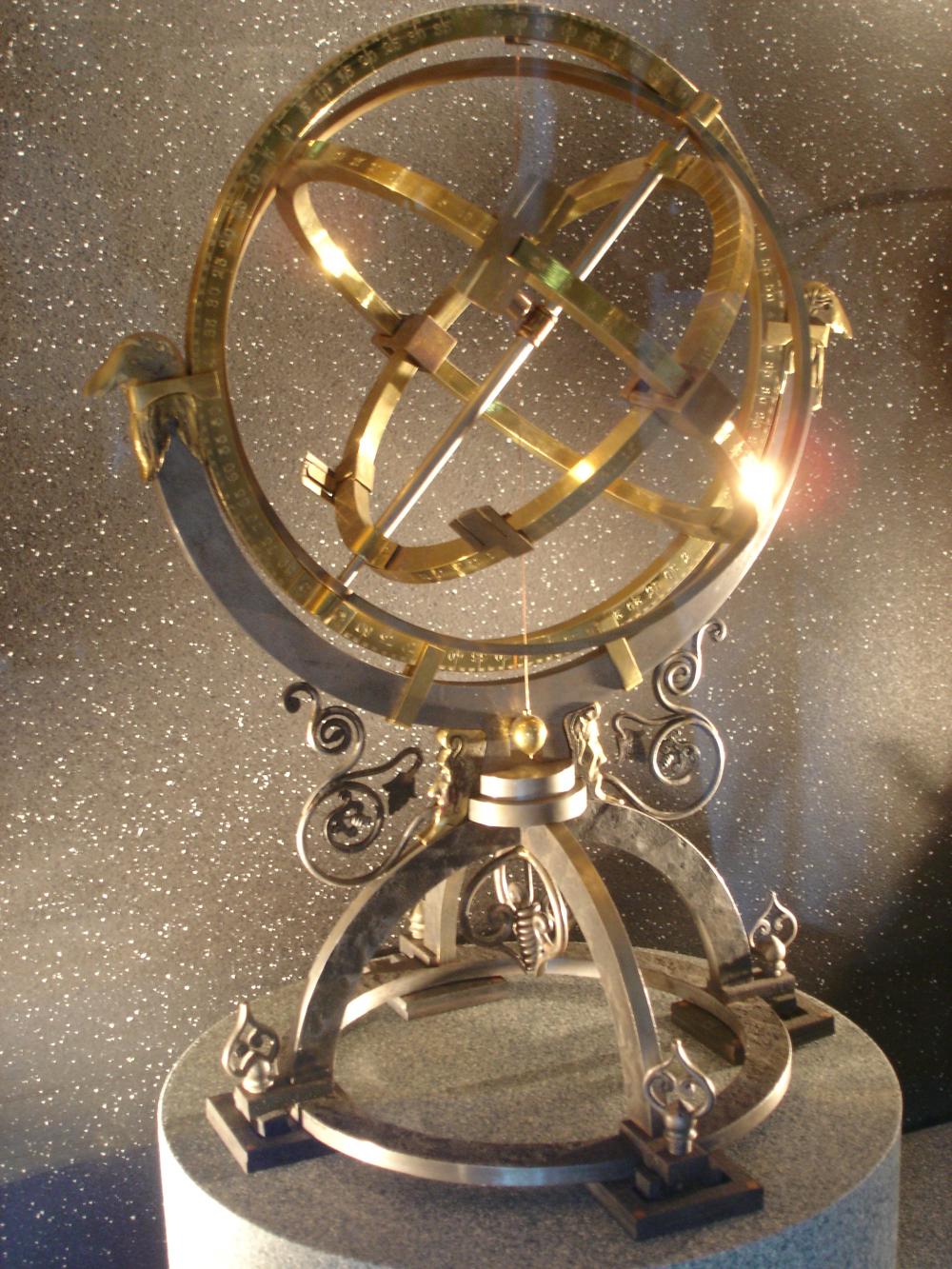 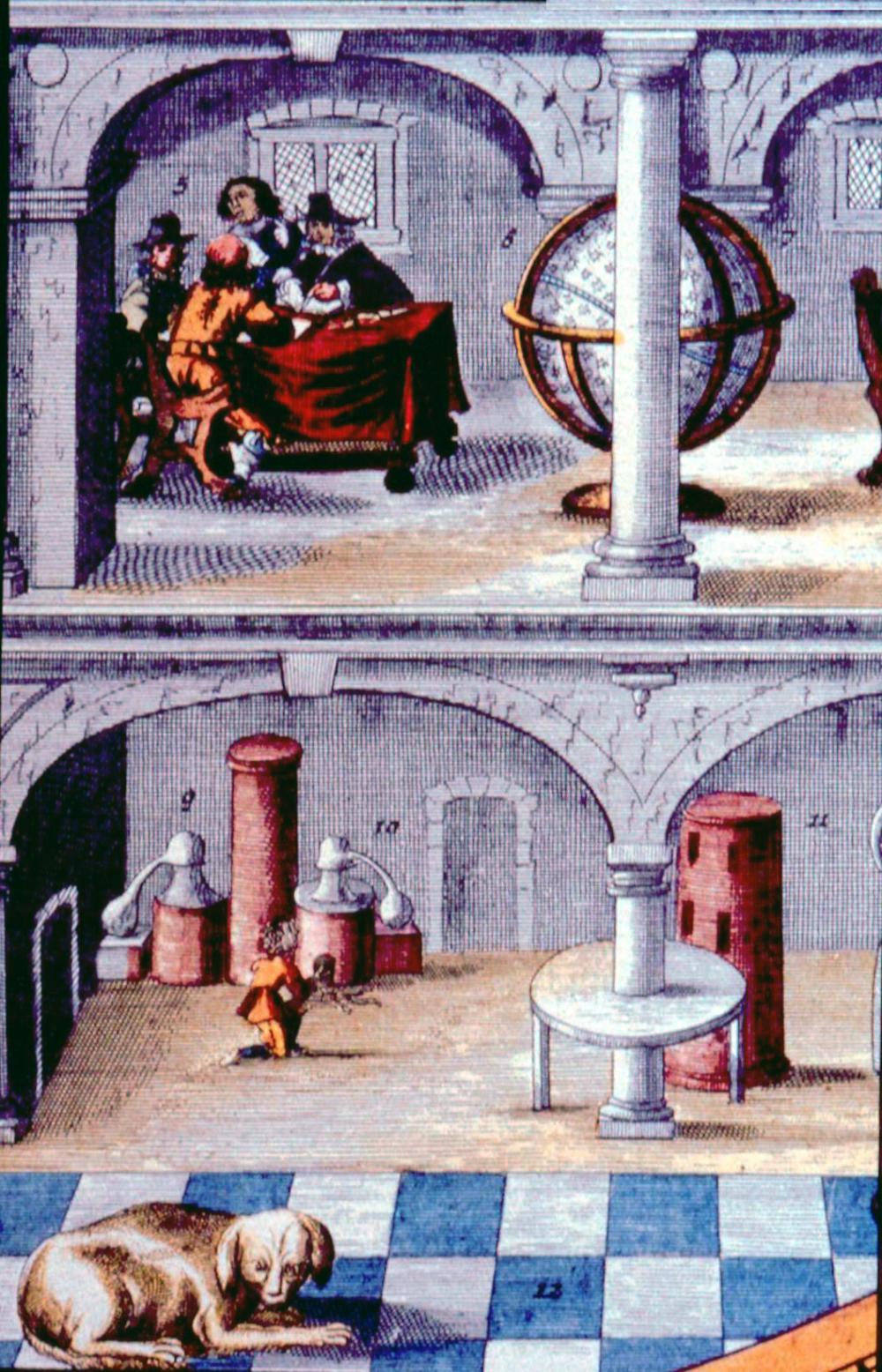 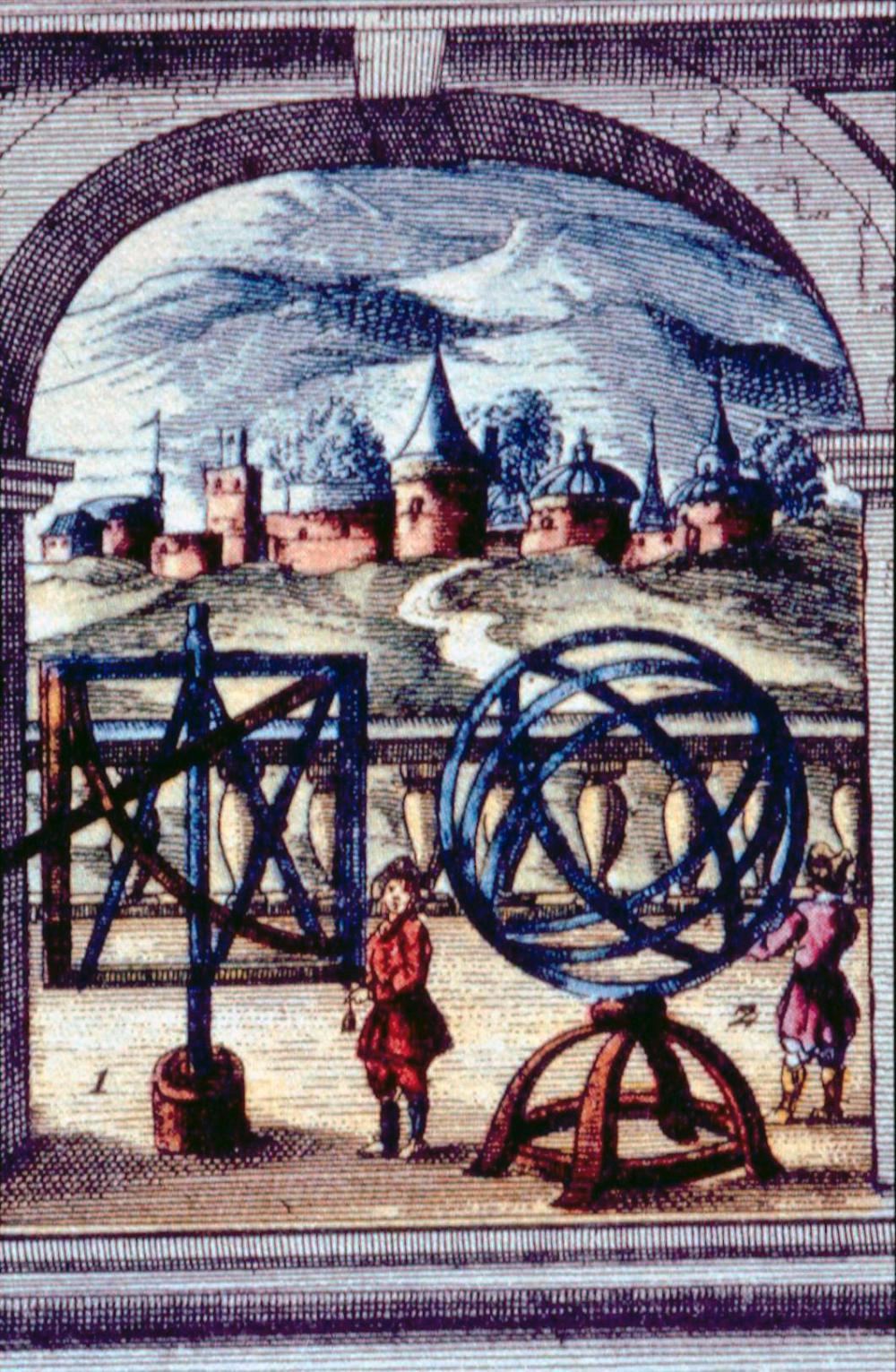 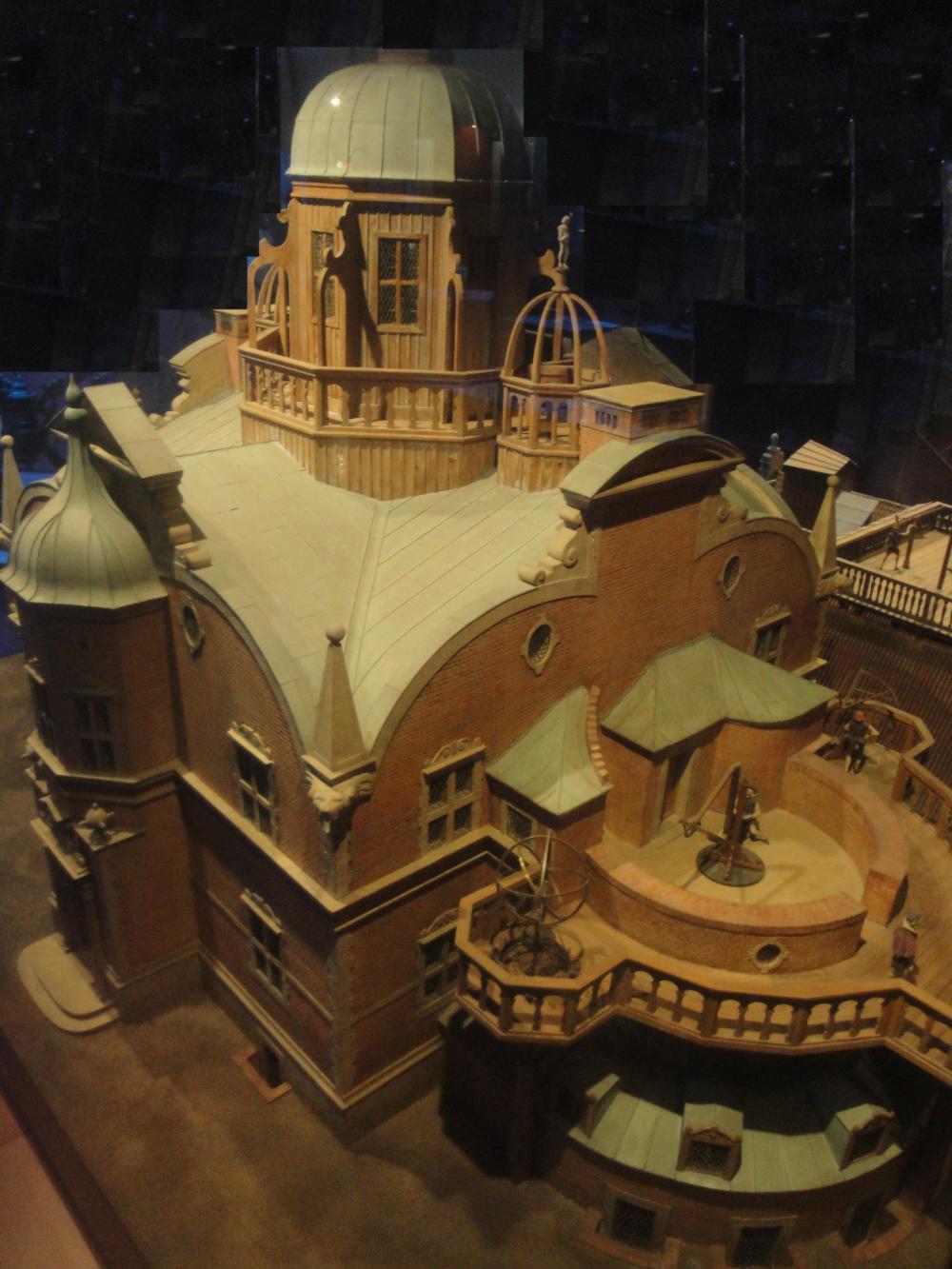 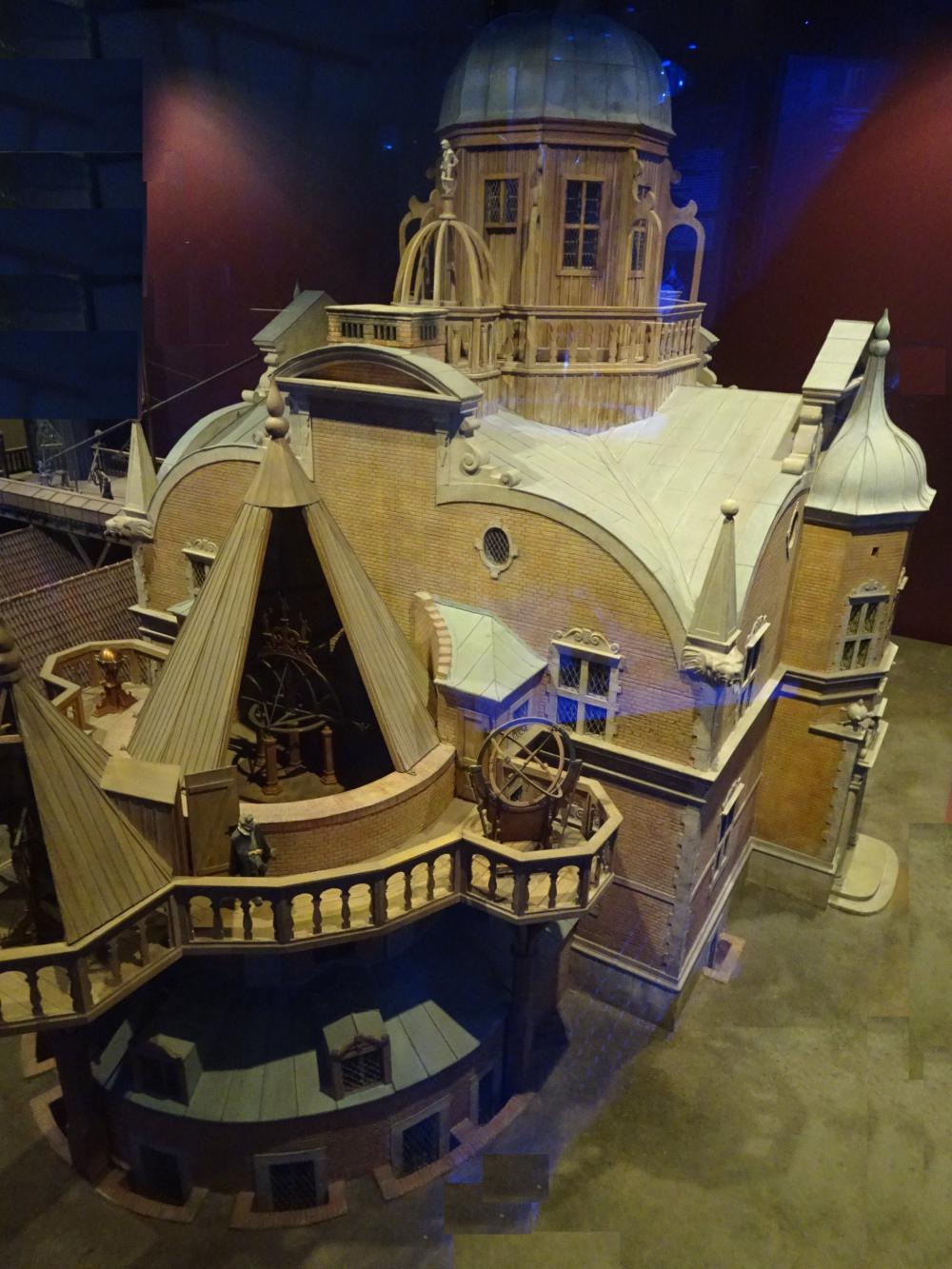 Fig. 7a and 7b. Uraniborg, model in the Deutsches Museum Munich (Photos: Gudrun Wolfschmidt)

Uraniborg no longer exists as an observatory (destroyed in 1601). But there is a very detailed description of the observatory and the instruments: Astronomiae instauratae mechanica (Wandsbek, 1598). 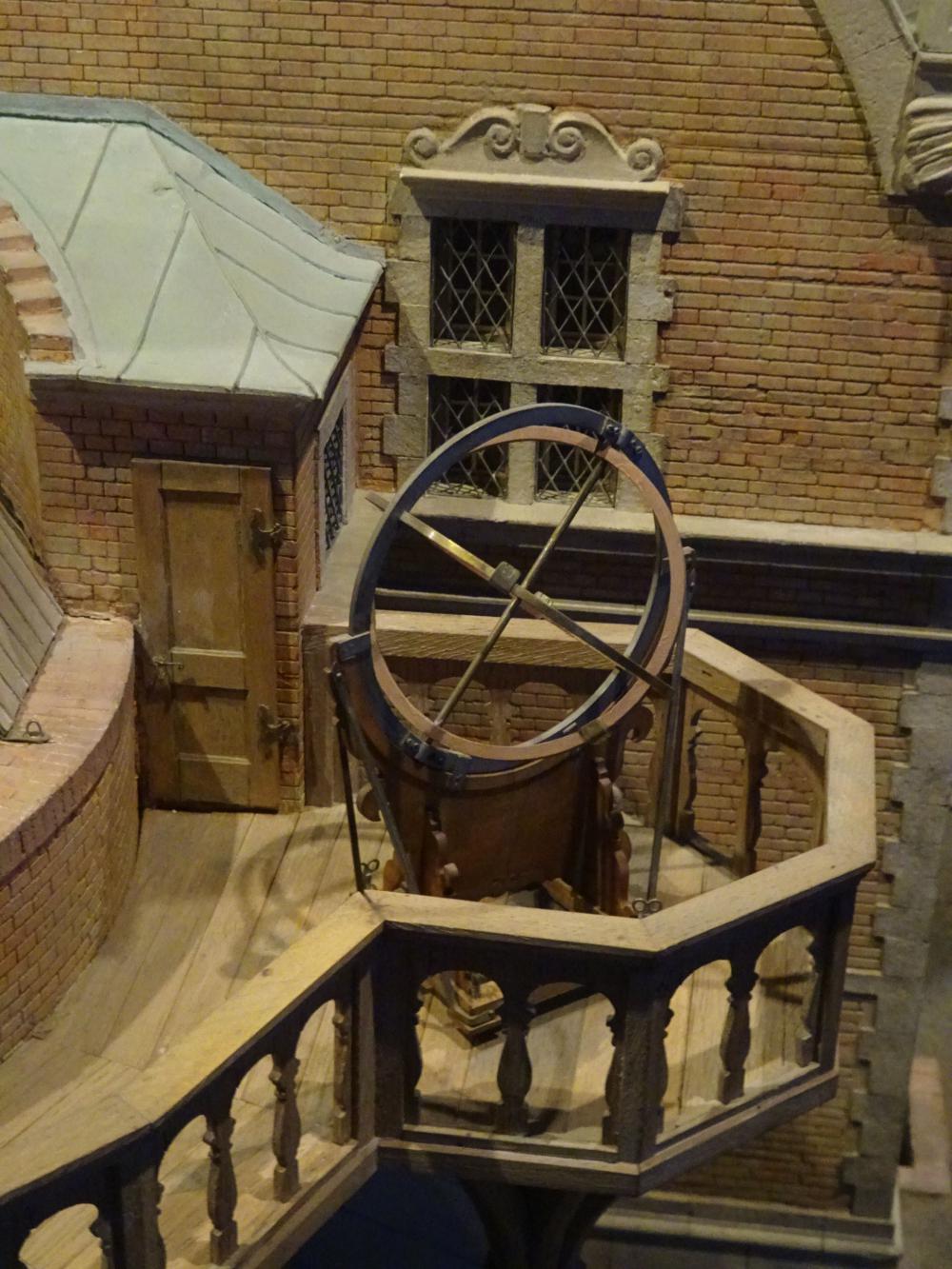 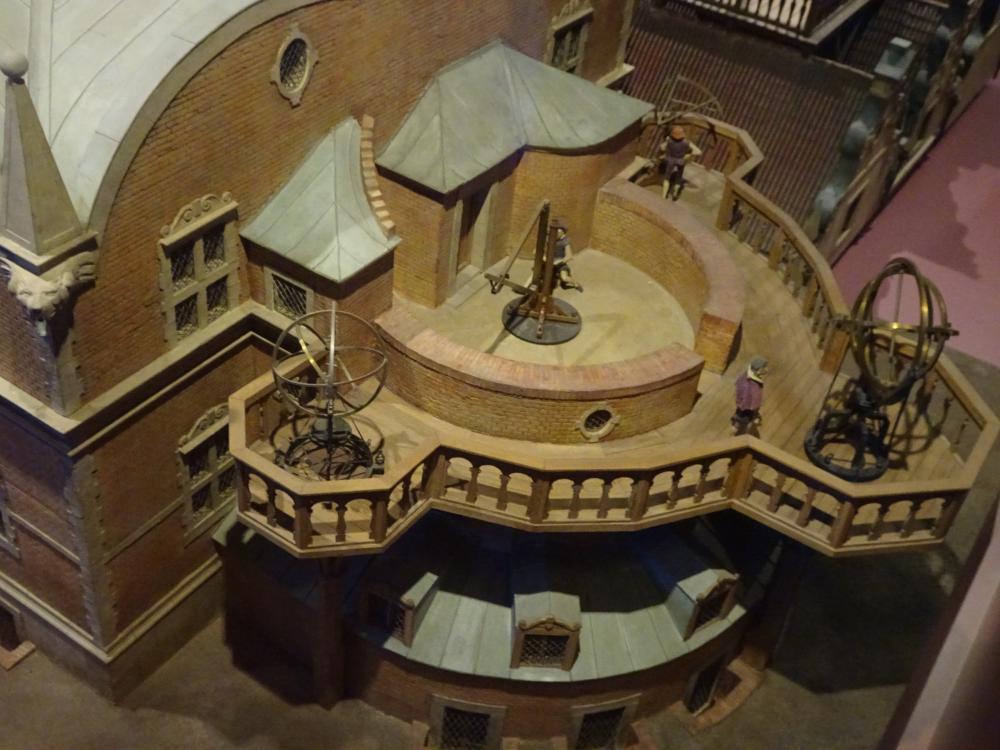 Some replicas were made: a scale model of Uraniborg with its instruments can be found in the Deutsches Museum Munich, and full-scale models of some instruments exist in other museums (Denmark, Sweden, Czech Republic).

Stellaeburgum was restored in the 1960s. The Renaissance garden around the observatory is reconstructed.

The Renaissance building of Uraniborg (influenced by Palladio, cf. Roslund et al. 2007) was very impressive, large and new - nothing similar to this observatory had existed before. The architecture of Uraniborg (Wolfschmidt 2010) may have been modelled on the symmetrical layout of Chambord Castle on the Loire (1539) or the buildings of the Italian Renaissance architects Andrea Palladio (1508-1580), or Sebastiano Serlio (1475-1554) - particularly the Villa Rotonda (1552) in Vicenza near Venice.

A comparative study (İhsanoğlu 2004) shows the strong influence of Islamic instruments such as those of Maragha and Samarkand observatories, and that of Taqi al-Din used in Istanbul observatory, on Tycho’s. But the architecture of the observatory and the mounting was different.

The Round Tower in Copenhagen was inaugurated in 1642 as a replacement for Uraniborg’s astronomical functions.