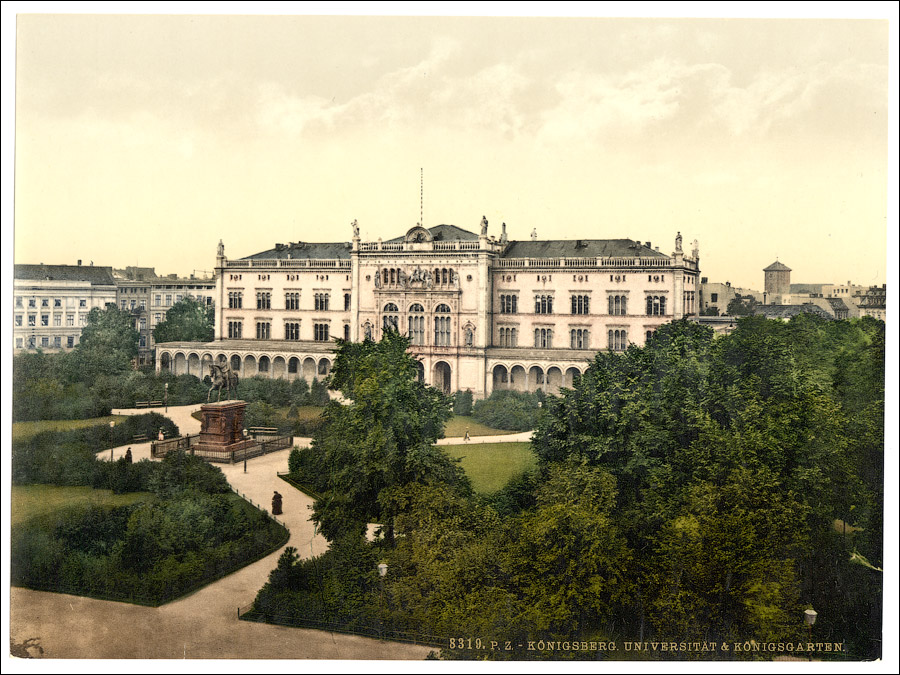 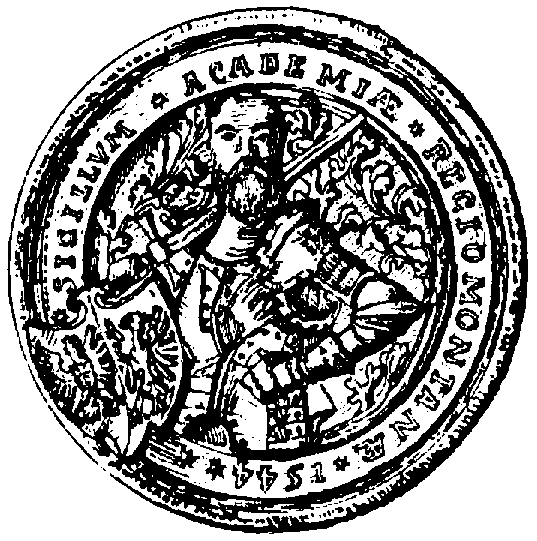 Fig. 1b. Seal of the Königsberg University Albertina (creative commons)

The famous University Albertina in Königsberg was founded in 1544 as the second Protestant university after Marburg.  In 1844, King Frederick William IV of Prussia (1795--1861) laid the foundation for the new main building of the Albertina -- according to plans designed by the Prussian architect Friedrich August Stüler (1800--1865); the building in Neo-Renaissance style was inaugurated in 1862.

In 1809/1810, in the middle of the Napoleonic wars, the Prussian  government, King Wilhelm III., wanted to build an observatory in the East Prussian capital Königsberg. At that time Wilhelm von Humboldt (1767--1835) in Prussia promoted extensive reforms in education and administration. Young scientists got the opportunity in universities and academies.

On the financial outlay, Bessel remarked:
"Es kann sonderbar scheinen, dass in den jetzigen Zeiten so viel an eine Sternwarte verwandt wird; allein die Zeiten, wo das Militair alles wegnahm, sind vorbei, und so wird denn das lebhafte Interesse an wissenschaftlichen Sachen erklärlicher. Unsere Regierung ist in dieser Hinsicht allen anderen ein Muster." ("It may seem strange that in the present times so much is spent on an observatory; but the times when the military took everything away are over, and so the lively interest in scientific things becomes more explainable. Our government is a model for all others in this respect.")
(Königlich Preußische Akademie der Wissenschaften (ed.): Briefwechsel zwischen Gauss und Bessel. Leipzig 1880, p. 144, Letter from Bessel to Gauß dated 10 March 1811). 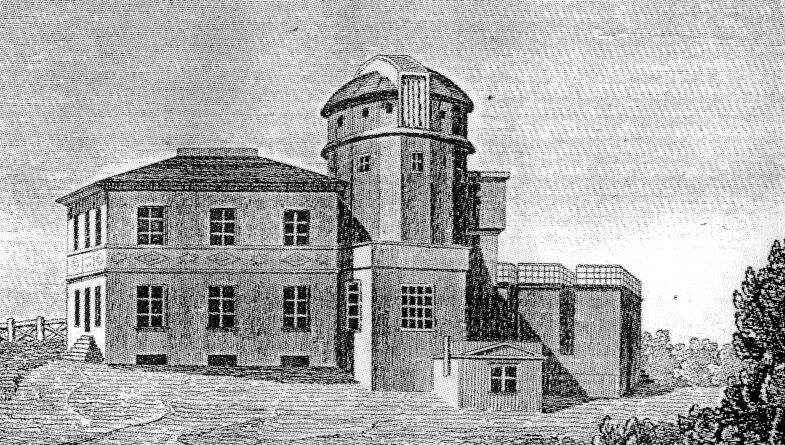 Fig. 2a. Königsberg Observatory with heliometer tower, around 1830 (Wikipedia)

In addition to the academic teaching, the first focus of Bessel’s work was building an observatory. He chose the site on the former fortifications (Butterberg) in the Northwest of the city. Then he designed a plan for the architecture, which he had to defend against the different plans of the Berlin government. On November 10, 1813, he was able to move into the completed observatory.

The first equipment consisted mainly of used instruments, which the Prussian state acquired in 1809 from the estate of Friedrich von Hahn (1742--1805) of Remplin Observatory. By procurement of the director of the Berlin Observatory, Johann Elert Bode (1747--1826), the instruments were donated to the new Observatory Königsberg (1810):

Because the large instruments were not yet available, Bessel began evaluating the observations of the British astronomer James Bradley (1692--1762) and created a star catalogue with 3,000 stars. The fundamental work entitled "Fundamenta astronomiae" was published in 1818. 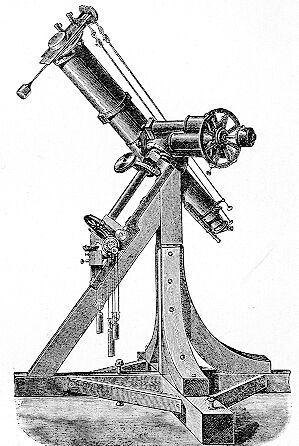 The Bessel zone observations with the meridian circle (positions of 30,000 stars) later found their continuation in the famous Bonner Durchmusterung of Friedrich Wilhelm August Argelander (1799--1875), who was Bessel’s assistant from 1820 to 1823 -- in the early days of zone observation. 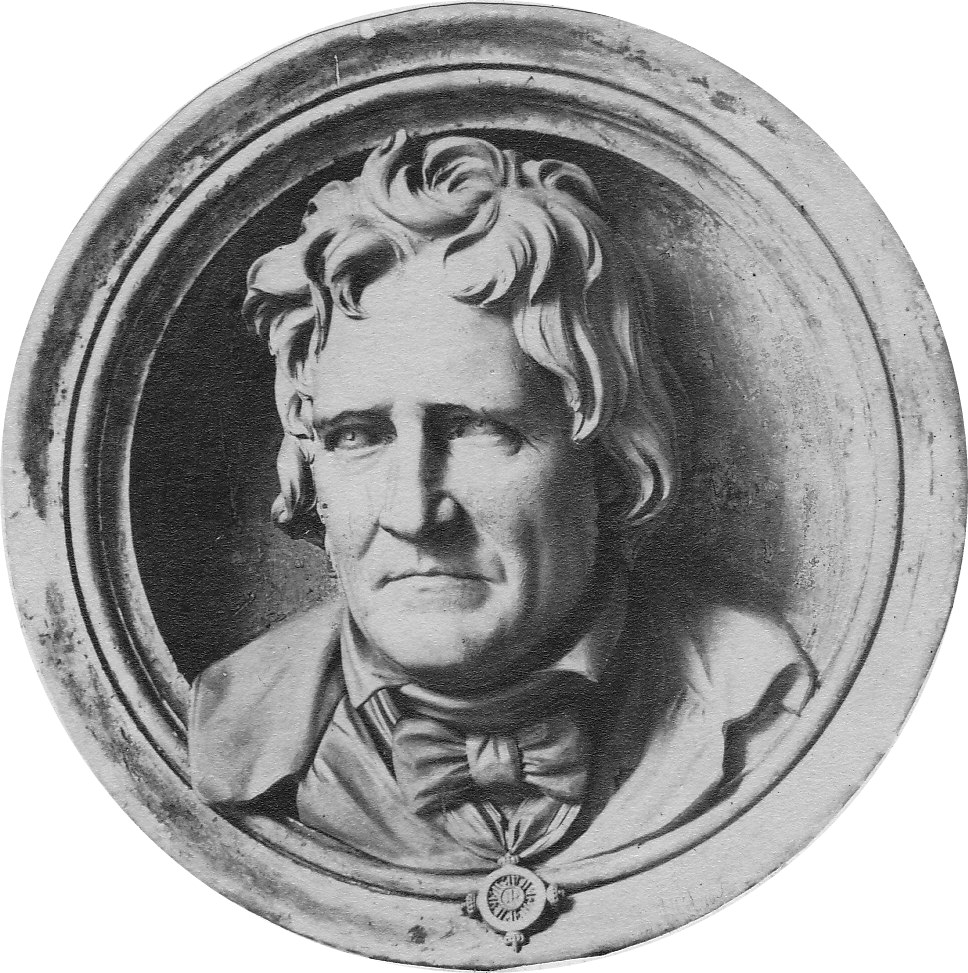 The Royal Königsberg Observatory was an astronomical research institute affiliated to the Albertus University of Königsberg (1544 to 1946). Bessel trained scholars from all over Europe to become practical astronomers. Many of them were later directors of astronomical institutions in Europe.

Königsberg became one of the leading research centers of astronomy in Europe through Bessel’s work. The highlight was: Bessel was the first astronomer to determine the exact distance of a fixed star. 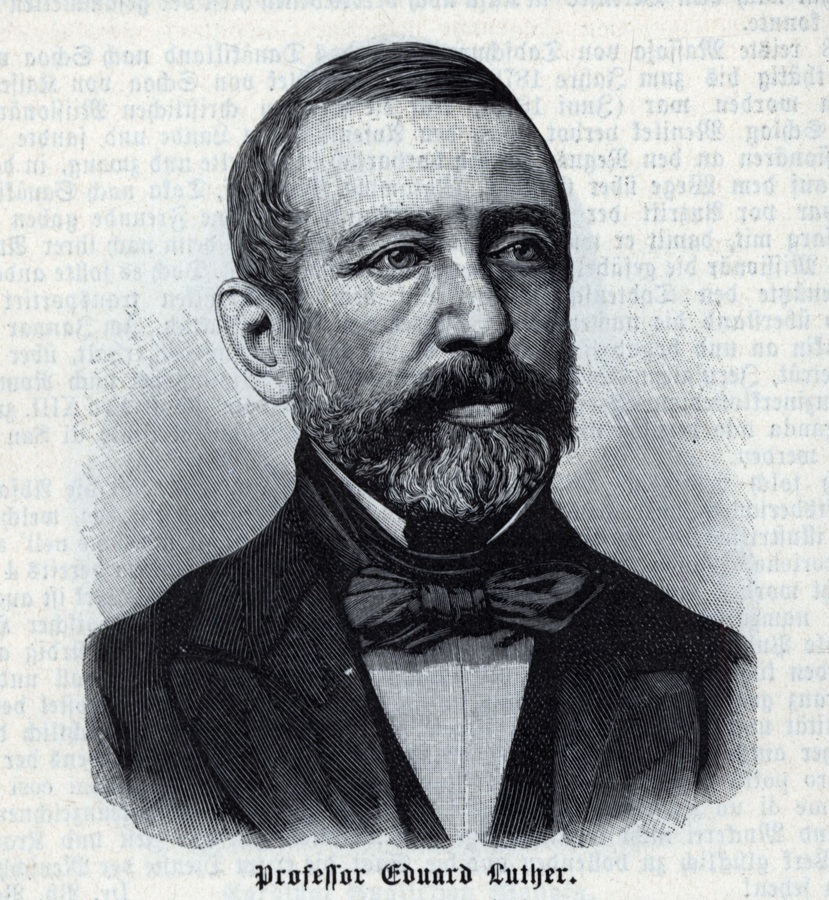 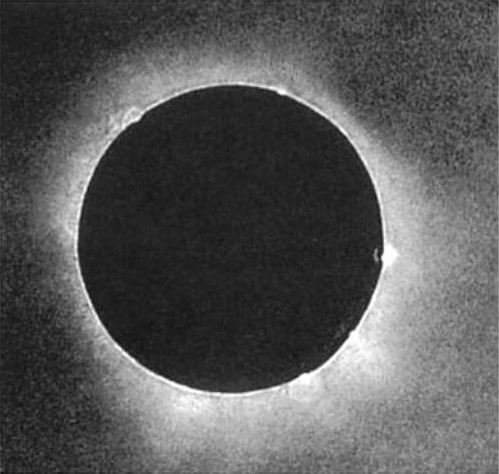 Another highlight of Königsberg Observatory was the first photograph of a total solar eclipse, taken as a daguerreotype by Julius Berkowski on July 28, 1851. 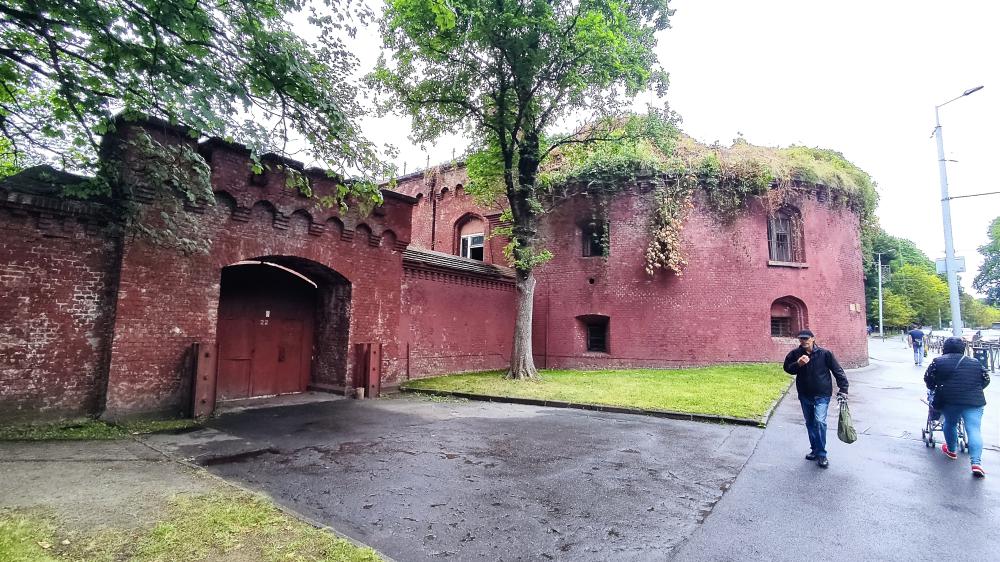 The air raids on Königsberg in August 1944 severely damaged the observatory as well as numerous other university buildings.
Russia today tries to keep the memory of the names and the remarkable achievements of the famous mostly German astronomers alive in the Russian city of Kaliningrad. 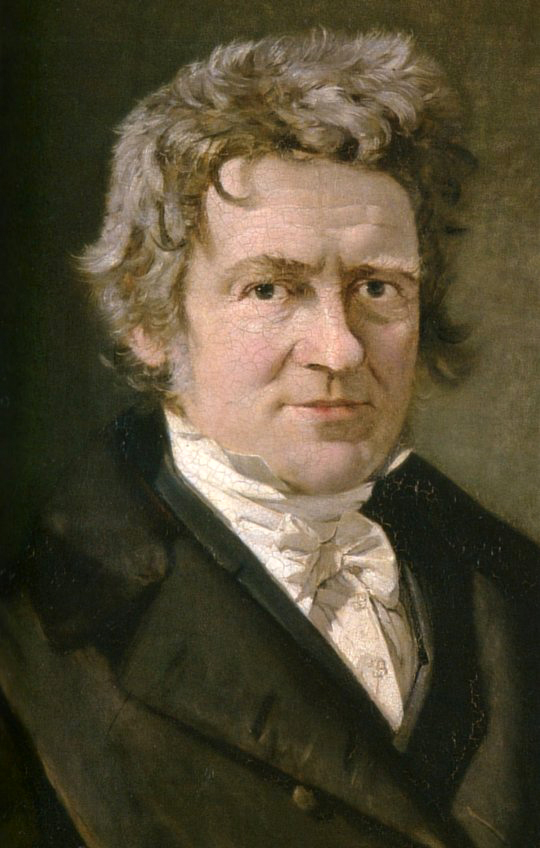 Friedrich Wilhelm Bessel (1784--1846) succeeded in 1838 in measuring the first fixed star parallax. Alreday in 1802, Johann Hieronymus Schroeter (1745--1816) estimated the upper limit of the parallax for the nearest stars to be quite reliable at 0.75 seconds of arc. Bessel realized that the parallax he wanted had to be well below 1’’. He also knew that the accuracy of the instruments of that time, like a meridian circle, was far from sufficient. Only his Fraunhofer Heliometer (1829) offered - in addition to the large Fraunhofer refractor with equatorial mounting and clockwork drive in Dorpat -- the possibility for an accurate measurement. Bessel began the series of measurements in August 1837 and finished them in October 1838. He determined the parallax value of 0.3136’’ with a mean error of 0.0202’’. In addition, Bessel had cleverly chosen the double star 61 Cygni -- the star with the largest known proper motion. As an illustrative comparison for the distance of 61 Cygni, Bessel calculated "the time which the light needs to travel this distance" to be 10.28 years.
A modern comparison: The most accurate parallax value for 61 Cygni was measured in 2015 by the Hipparcos astrometry satellite at 0.286’’, which corresponds to a distance of 11.4 light years.

An additional result was: The Copernican world view was proven by measurement, which had long been accepted by experts. 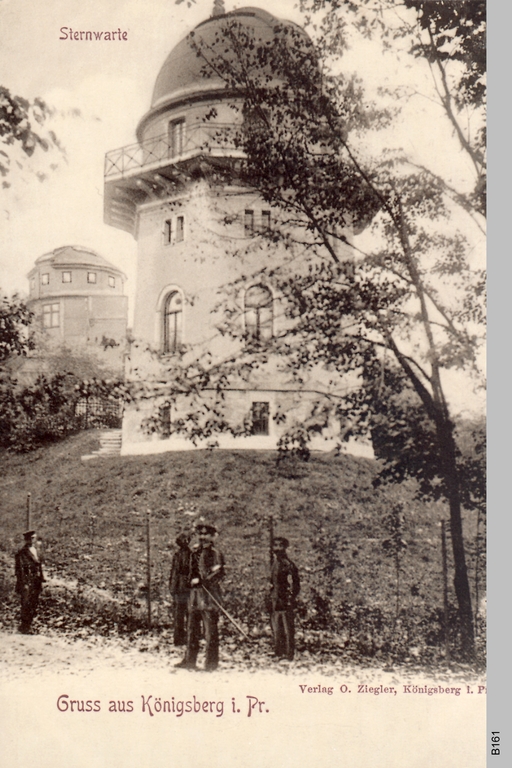 Practically at the same time, Friedrich Georg Wilhelm von Struve (1793--1864) determined the parallax of the Vega in 1837 with his Fraunhofer refractor in Dorpat (today Tartu), Estonia, with his Fraunhofer refractor. And the Royal astronomer Thomas James Henderson (1798--1844) published in 1839 in Edinburgh a parallax value for the binary Alpha Centauri, which he had observed in 1832/1833 in Cape Town.

By the end of the 19th century, only about 60 stellar parallaxes had been obtained, using a filar micrometer. Even with modern techniques in astrometry, the limits of precise measurement is about 300 light years. With the Hipparcos satellite (launched in 1989) the the number of parallaxes and proper motions of nearby stars were increased considerably. In addition, the stellar parallaxes measured to milliarcsecond accuracy was increased a thousandfold. Hipparcos is only able to measure parallax angles for stars up to about 1,600 light-years away, a little more than one percent of the diameter of the Milky Way Galaxy. 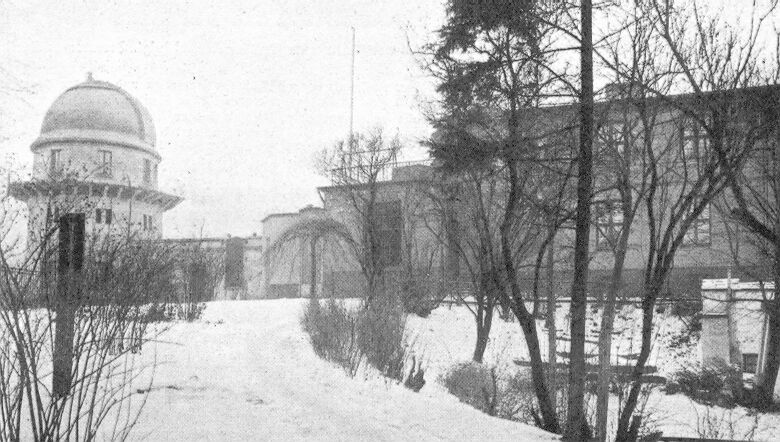 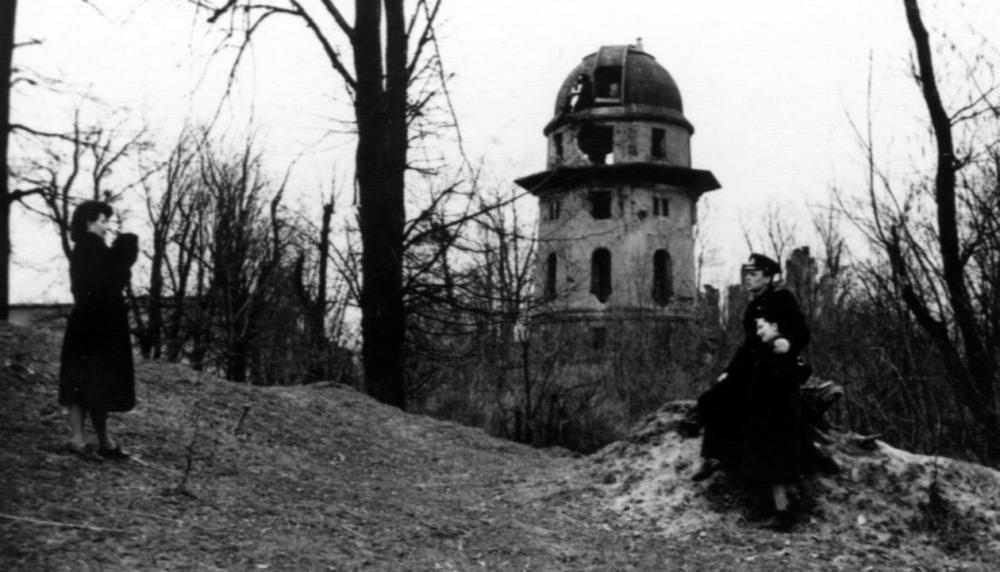 Königsberg Observatory was severely damaged in August 1944 and never rebuilt.

Königsberg Observatory (1810/13) is similar to Dorpat (today Tartu), Estonia (1810), a one dome observatory, nearly built at the same time.

Königsberg Observatory is no longer existing, destroyed in WW II.

Königsberg Observatory is no longer existing.

Königsberg Observatory is no longer existing and cannot be used.