Quito Observatory is the oldest observatories in South America. 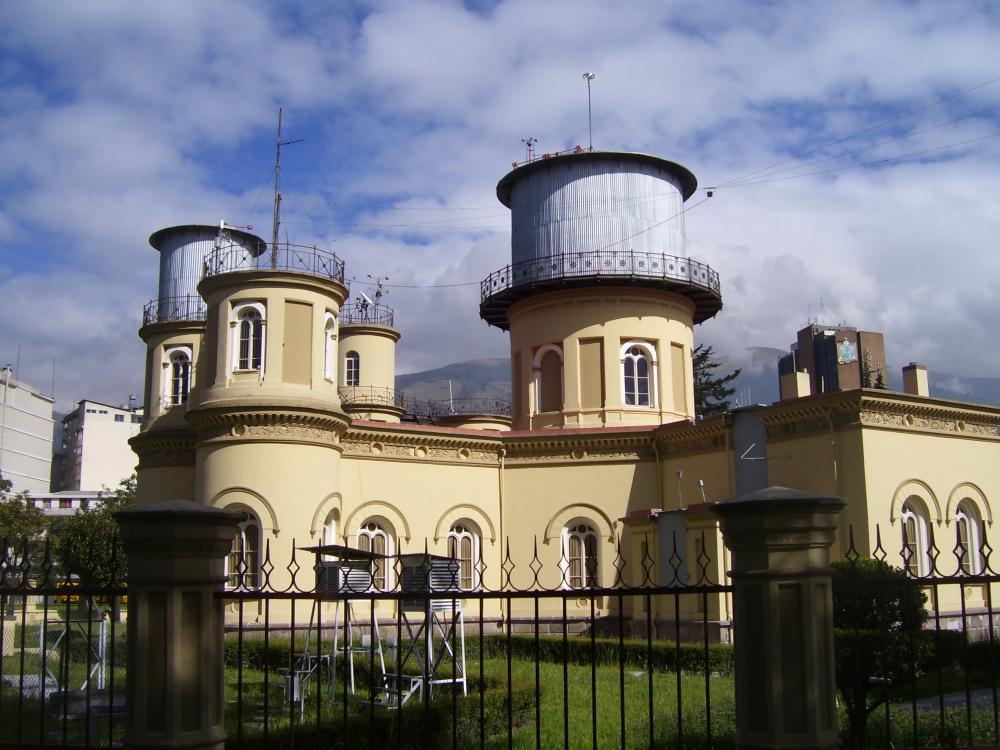 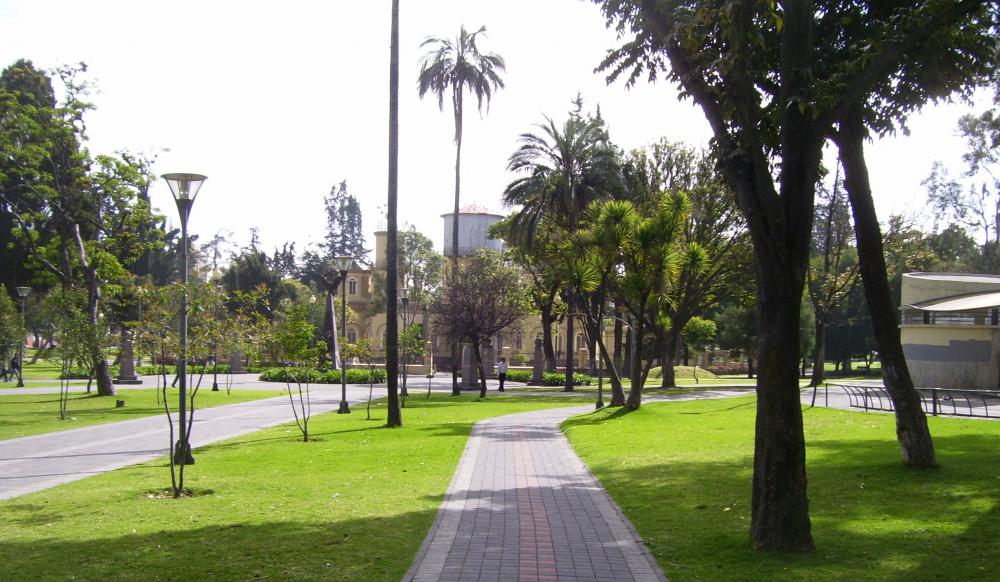 The architecture of observatories around 1800 is characterized by observatories in the shape of a greek cross with a central dome. Prominent examples of cross shaped observatories are the buildings in Berlin (1835) and in Bonn (1844), both built by the famous architect Karl Friedrich Schinkel (1781--1841).
Bonn Observatory has an impressive architecture with a central dome and six smaller cylindrical "domes" (cylindrical shape). Here Friedrich Wilhelm August Argelander (1799--1875), director since 1836, compiled there with the 7,7cm comet seeker (focal length 65cm) his famous Bonner Durchmusterung (1863) (cf. Schmidt 1990). 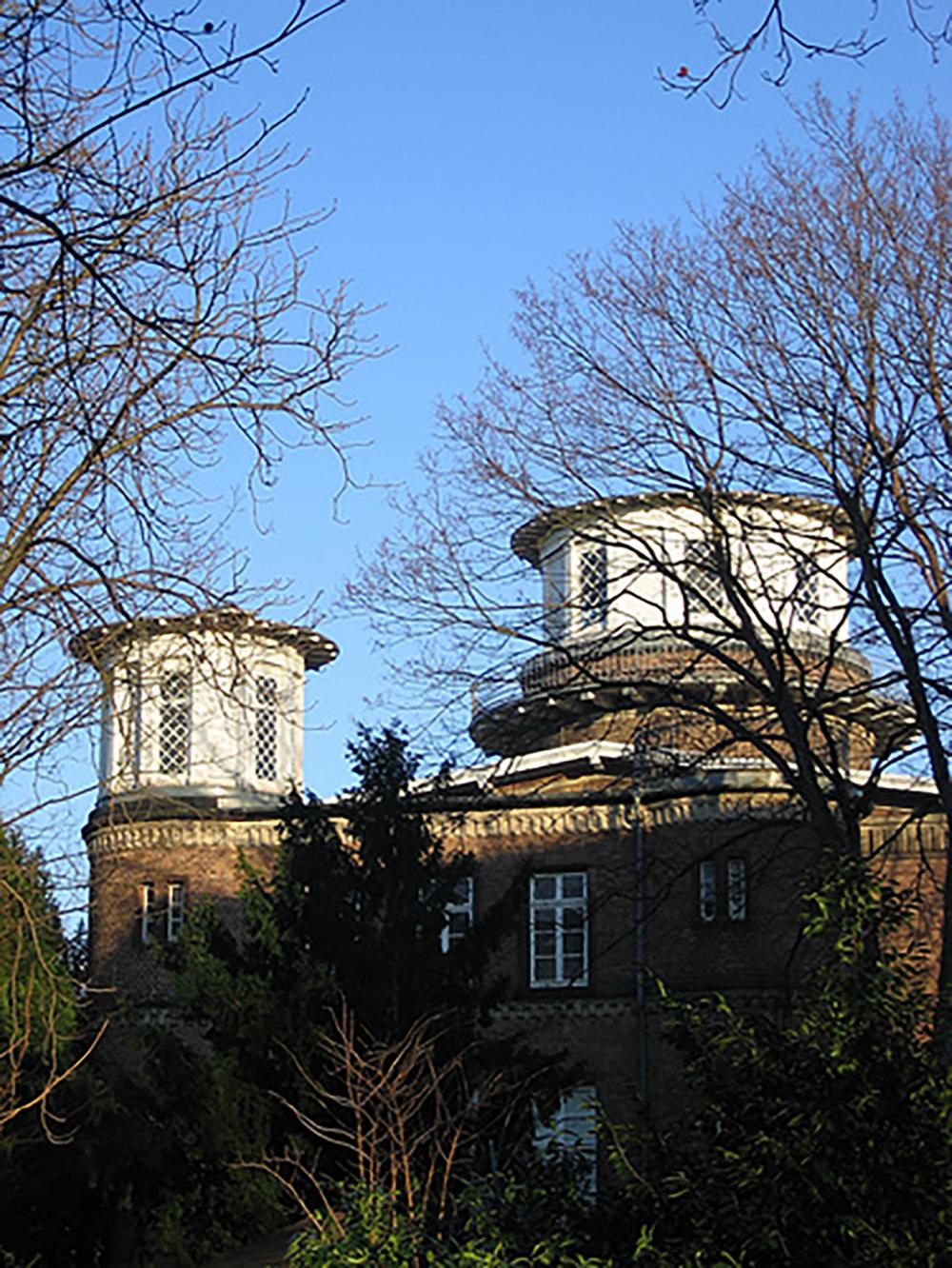 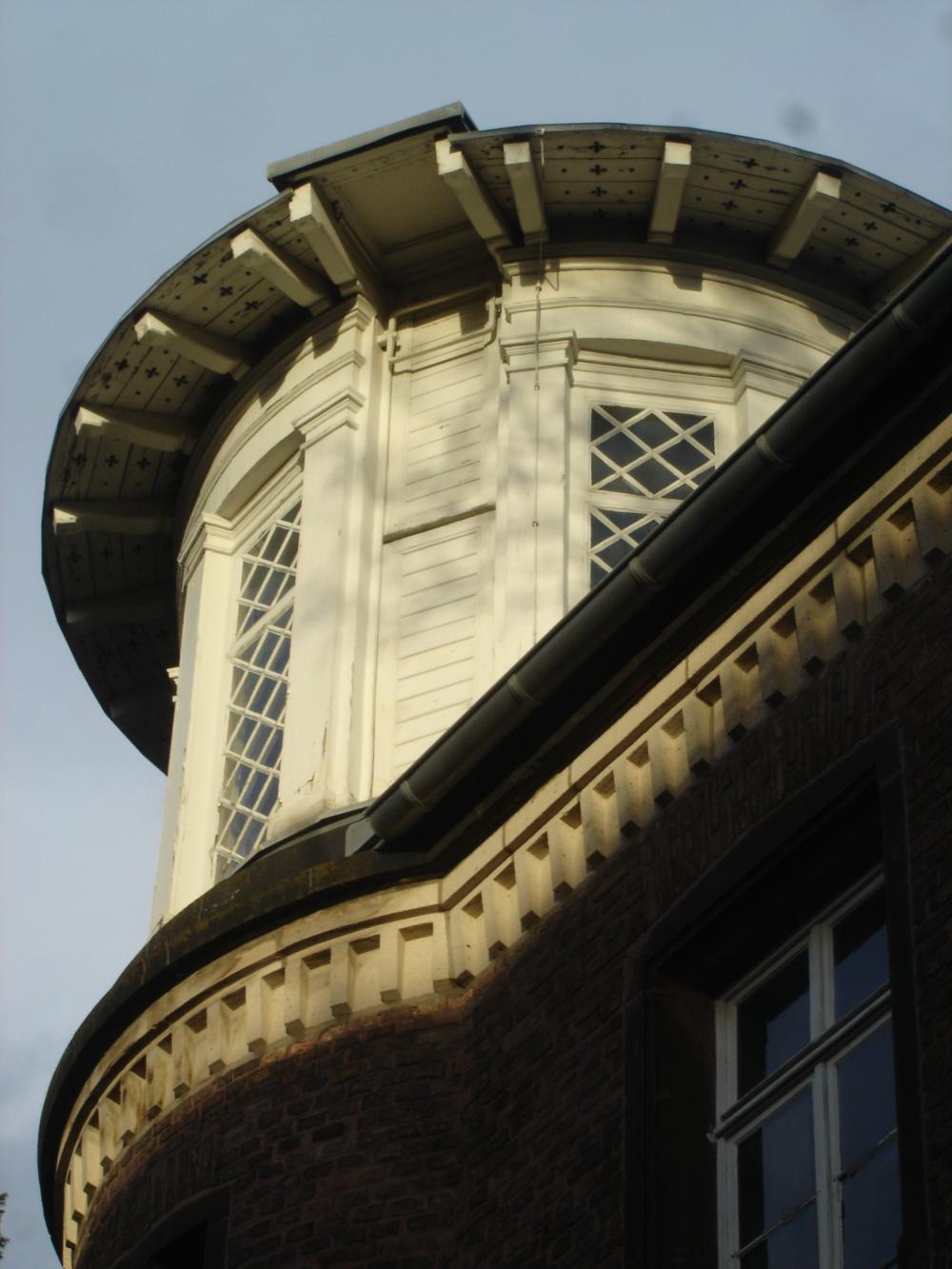 Inspired by Bonn and with the help of the German Father Juan Bautista Menten (1838--1900), the Observatorio Astronomico, Quito, Ecuador, erected in 1873, is the oldest observatory in South America.

It was built in Victorian style; it is now used as an Astronomical Museum. The building of the observatory -- the three turreted victorian style complex -- was the result of a dream and decision that was made by the then President of Ecuador, Dr Gabriel Garcia Moreno. The buildings are beautifully designed and constructed with arched doorways and big arched windows. 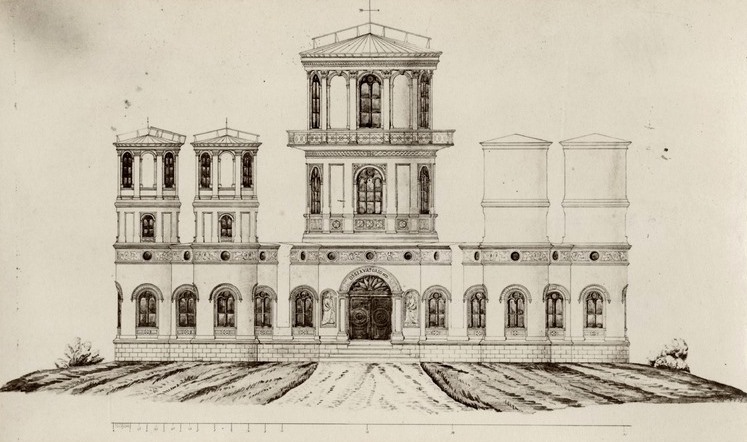 Dr Moreno’s dreams were realized by the construction of the Astronomic Observatory Museum and, together with German astronomer, J.B. Menten, the President, started the astronomical history and legacy of Ecuador. The observatory itself was the brainchild of then President Gabriel Garcia Moreno and visiting German scientist Father Juan Bautista Menten, who modeled the floor plan after Bonn Observatory in Germany.

The old instruments and telescopes stand as testimony of a rich exploration heritage and the curiosity of a nation. The rich collection of instruments and telescopes form an important cultural heritage with the building, restored in 2009. Very noteworthy is the large equatorial 9’’ refractor by G. & S. Merz in Munich (1874). Particularly difficult and unusual was the mount for the extremely low pole height of Quito of only 14 arc minutes. The other original equipment consisted both of instruments for astrometry and modern astrophysics: a spectrometer from Merz for the refractor, a Zöllner photometer from Ausfeld in Gotha, a meridian circle and a universal instrument by Pistor & Martins in Berlin, a theodolite from Ertel in Munich, a comet finder from Merz, smaller telescopes from Paris, plus sextants, precision clocks, chronometers and meteorological and magnetic instruments. Later, other instruments were purchased, a 10cm passage instrument by Carl Bamberg in Berlin, a meridian circle of Repsold & Sons in Hamburg (1892) and a Bosch Omori seismograph by J.A. Bosch in Strasbourg with an attenuation from F. Omori (1910).

During the presidency of Dr. Gabriel García Moreno (1821--1875) was the origin of the Observatorio Astronómico de Quito (OAQ) in Ecuador. The German Jesuit priest Juan Bautista Menten (1838--1900) was born in Krefeld, studied at the Jesuitenkollegien monastery Gorheim and Friedrichsburg near Münster and then natural sciences at the University of Bonn. After working for Angelo Secchi (1818--1878) in Rome, he was director of the Bombay Observatory, India, until he came to Ecuador in 1870 and became founding dean of the Escuela Politécnica Nacional, founded in 1869.

Inspired by the architecture of the Bonn Observatory, Menten, director until 1883, designed this Victorian-style oldest observatory in South America (1873). It is a magnificent building with large arches above the windows and doors and with a large central tower with cylindrical dome (7-m-diameter) and four smaller towers, a meridian hall (left of the entrance) and a room for observation in the 1st vertical (right); the two back wings served as an apartment, in between was the library. Today, the building is used as anastronomical museum. 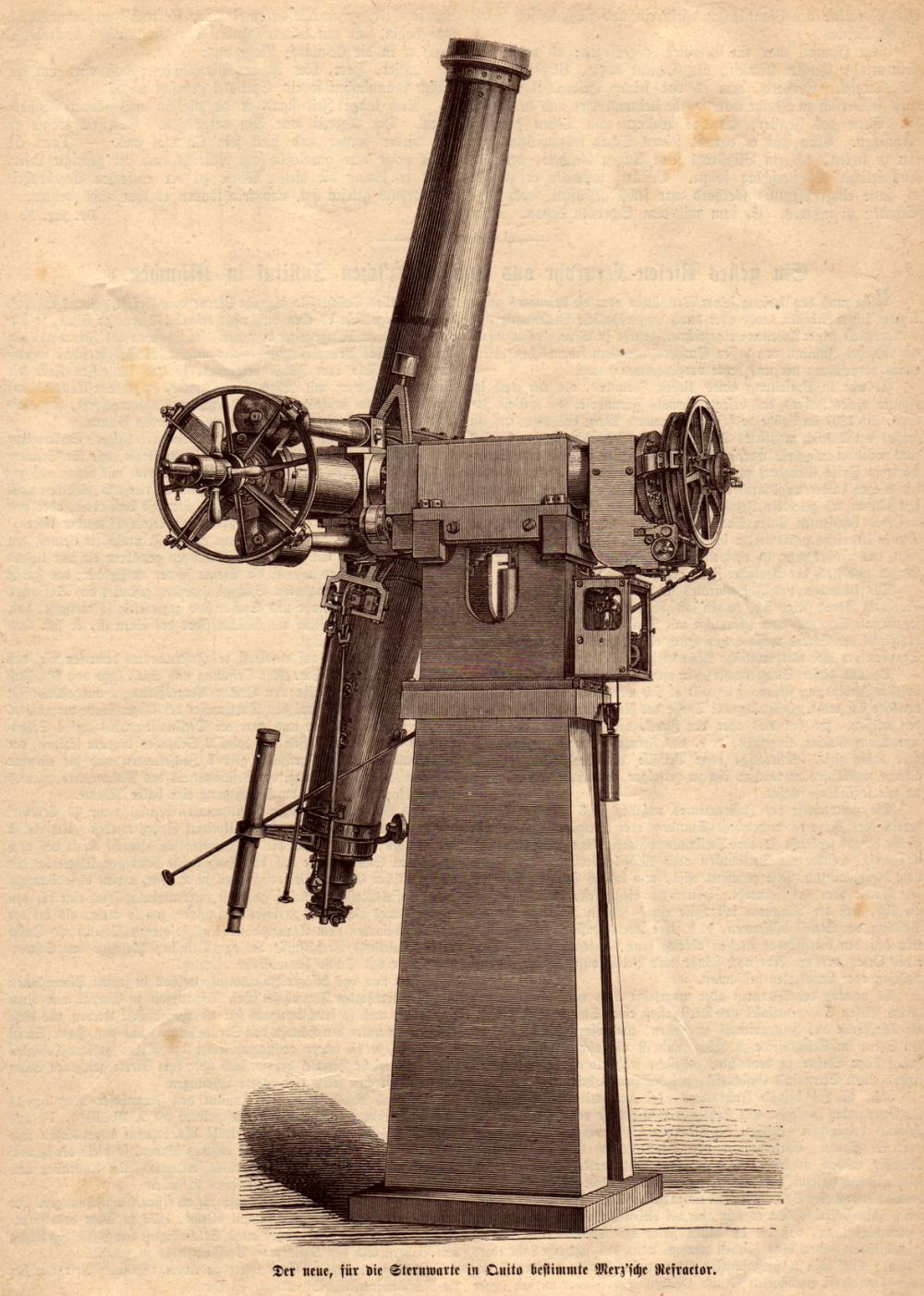 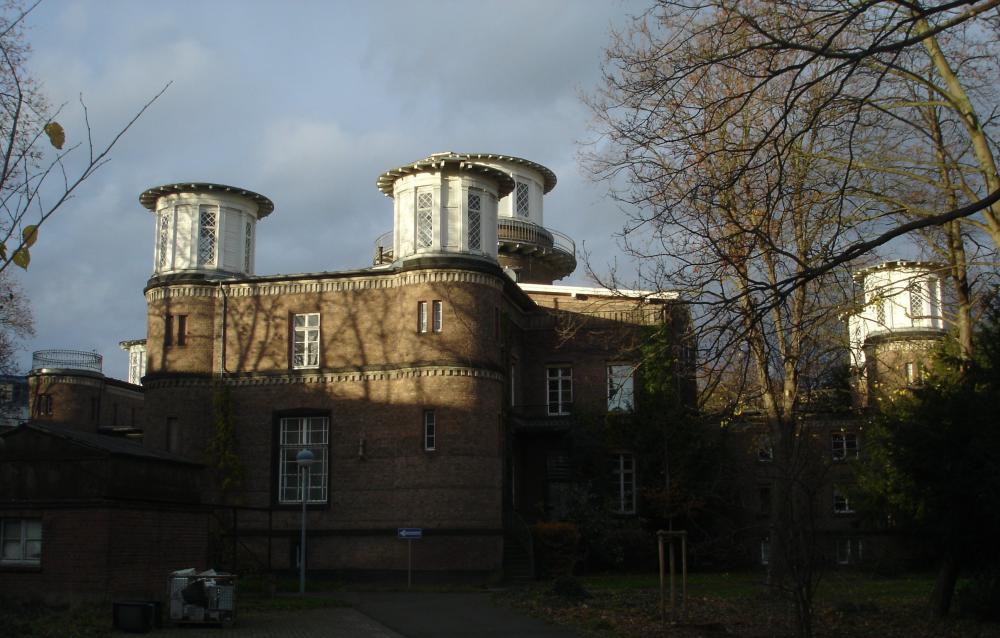 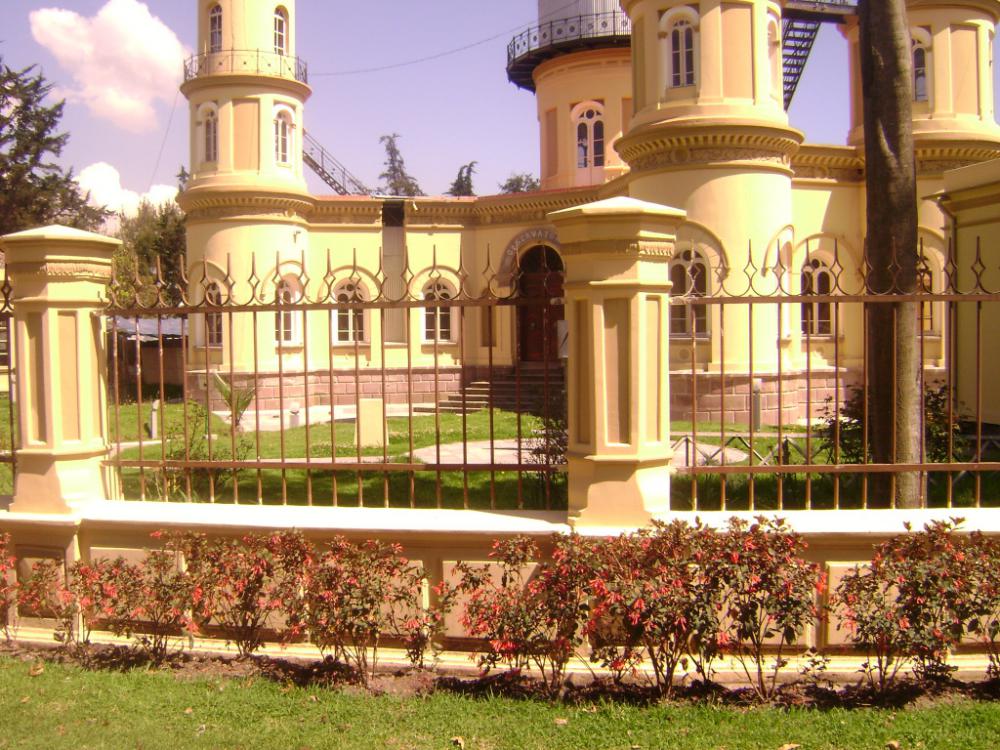 Since 1963 it is a research institute of the National Polytechnic School (EPN) in Quito with the major research fields astronomy and atmospheric physics.