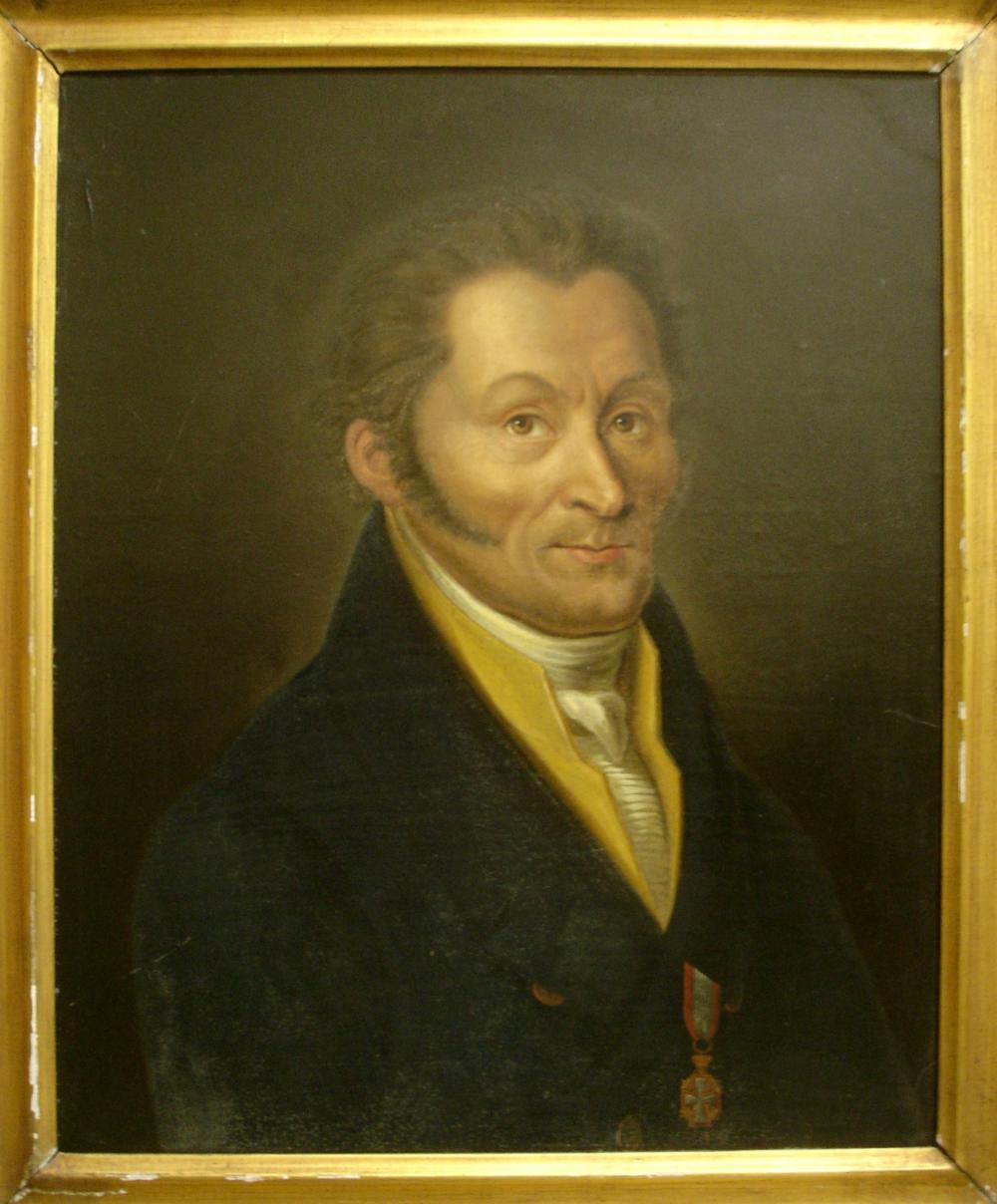 Johann Georg Repsold (1770-1830), educated as water engineer in Cuxhaven, the seaport of Hamburg, became head of the city fire brigade and had as mechanician a workshop. Repsold started Hamburg Observatory as a private observatory (with an early  meridian circle), located first on the Stintfang (1802 to 1811), Bastion Albertus, a hill above the port of Hamburg, and then a second observatory at the Millerntor (1825 to 1906/12) on the Bastion Henricus of the Hamburg city wall (Koch 2001). 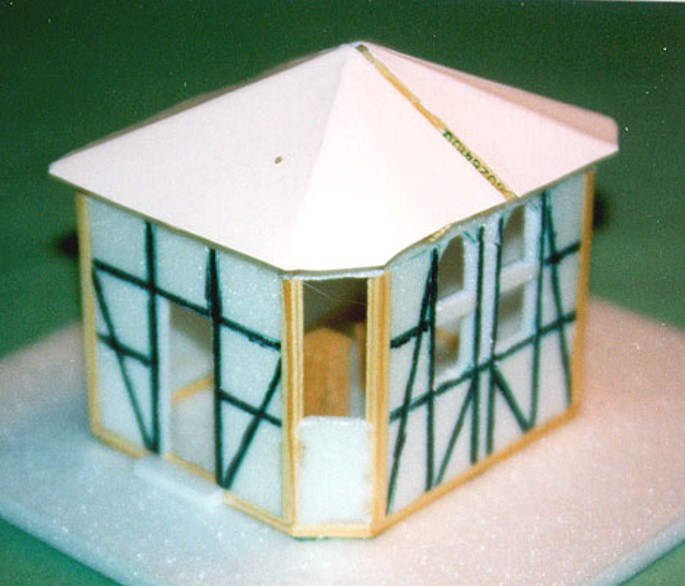 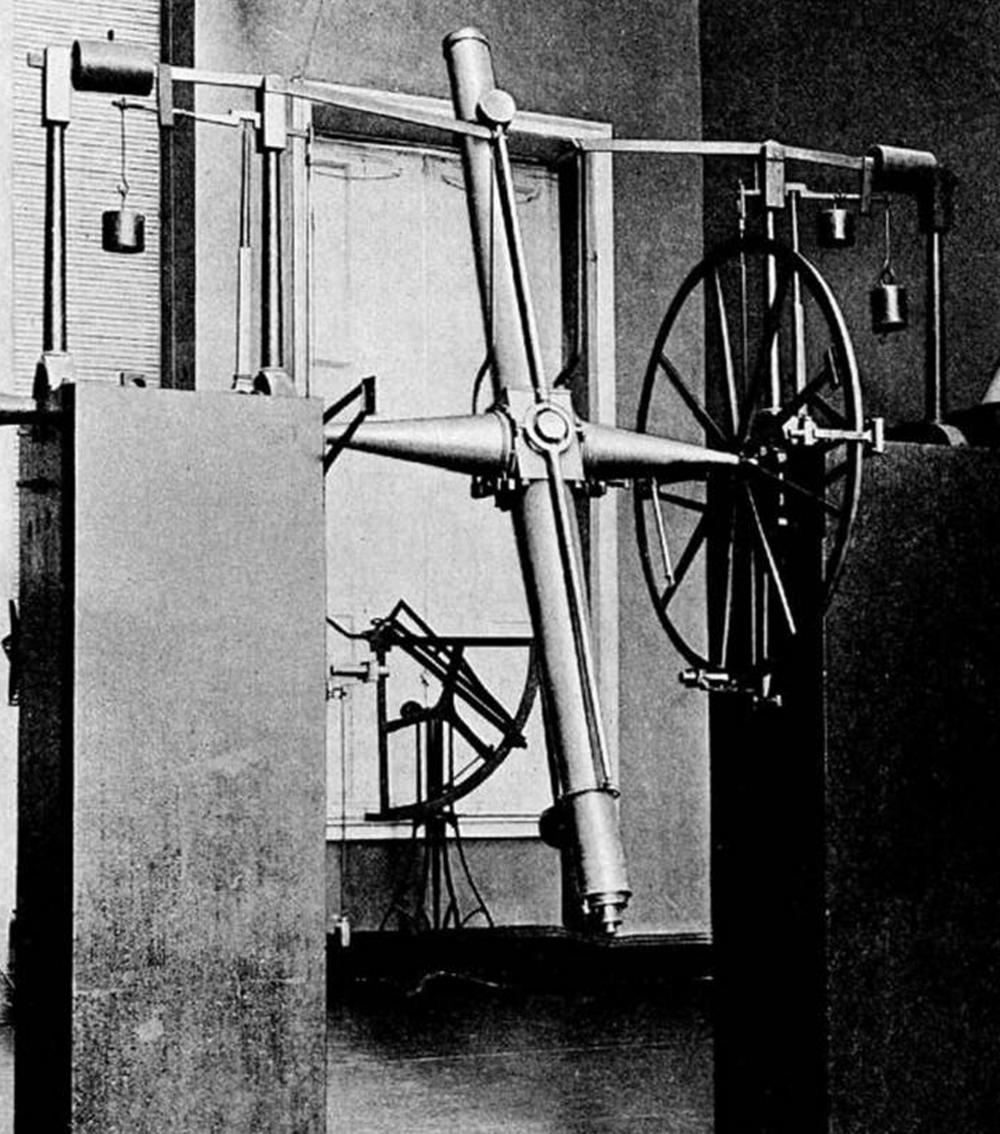 Because of the Napoleonic Occupation of Hamburg from 1811 to 1814, the Stintfang observatory had to be demolished. The  building of the German "Seewarte" (Oceanographical Institute with (Maritime) Meteorology and checking of nautical instruments - magnetic compass and sextant - and chronometers), founded in 1875 by Georg von Neumayer (1826-1909), stood here from 1879 to 1945; today is Hamburg’s Youth Hostel there.

Repsold’s Millerntor Observatory was a rectangular building, erected by the government-approved master builder Hinrich Anton Christian Koch (1758-1840) in 1825, had a two-domes-facade for the astronomical institute and for the navigation school, founded already in 1749. In 1872 the Navigation School was moved from the observatory to the Seaman’s House. The director of the Navigation School was Carl Theodor B. Niebour, 1857 to 1915. Then, in 1905, the Navigation School Hamburg got a new building (today Maritime Weather Office, Bernhard-Nocht-Strasse), built by Albert Erbe (1868-1922), who also erected the new Hamburg Observatory in Bergedorf.

The astronomical instruments were donated by a private foundation, the estate of amateur astronomer Johann Christopher Grell (fl. 1824). In 1833 the Millerntor Hamburg Observatory became a Hamburg state institute with the two directors Christian Karl Ludwig [Charles] Rümker (1788-1862) and George Rümker (1832-1900).

Johann Georg Repsold made also the instruments (Heliotrop and baseline - Braaker basis) for the triangulation of Denmark, Hamburg, and the Kingdom of Hanover; he cooperated with Heinrich Christian Schumacher (1780-1850), Danish Altona Observatory (Palmaille 9, 1821 to 1873, now part of Hamburg) and Carl is still visible in Altona: 0h30m25s East of Paris. 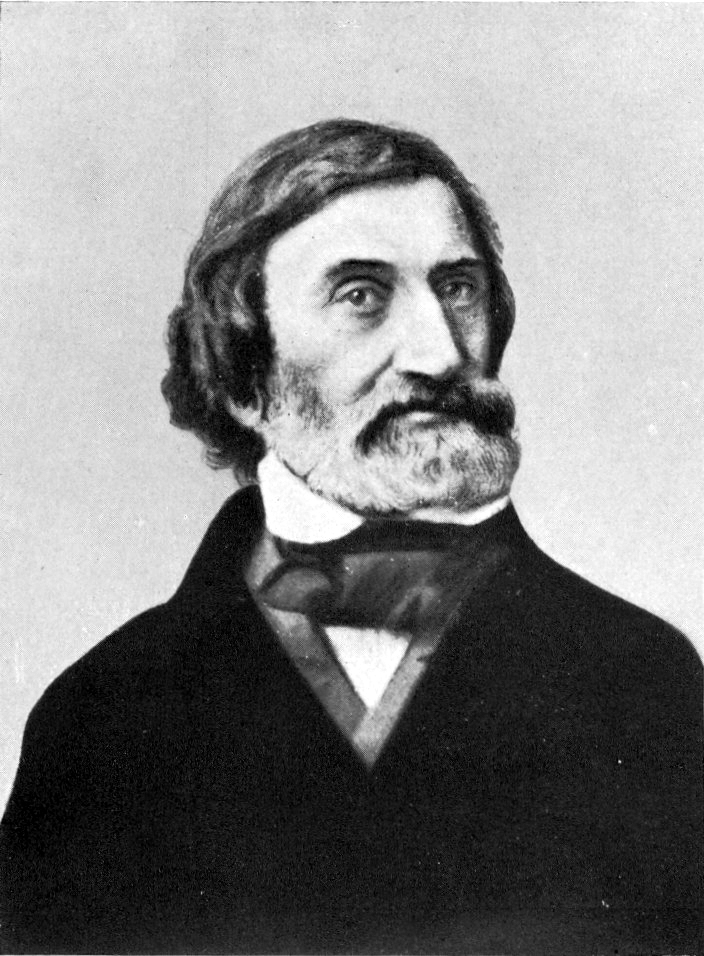 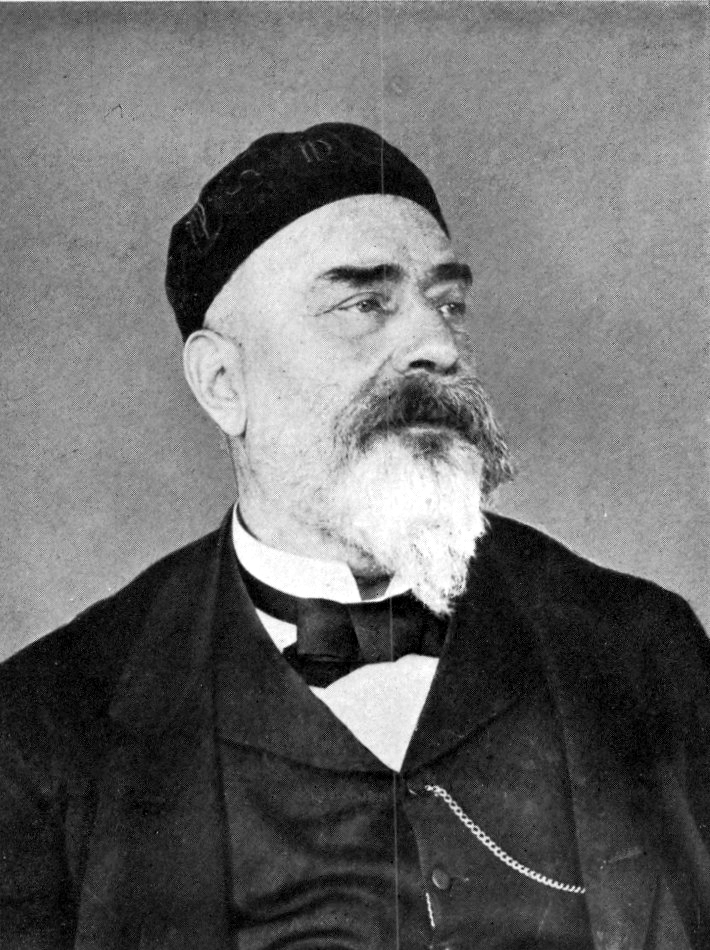 His wife Mary Hannah Rümker, née Crockford, (1809-1889), discovered a comet on October 11, 1847. But the comet was already discovered by Mary Mitchell (1818-1889) as early as October 1, 1847. After Mary Rümker had made an initial determination of the orbit, the Russian Countess N. Bobinski (fl. 1891) submitted another orbit calculation to the Petersburg Academy in 1891; independently of this, Margaretta [Marguerite] Palmer (1862-1924) was able to work at Yale redetermine the path using the methods that have since been improved, essentially confirming Madame Rümker’s calculations. 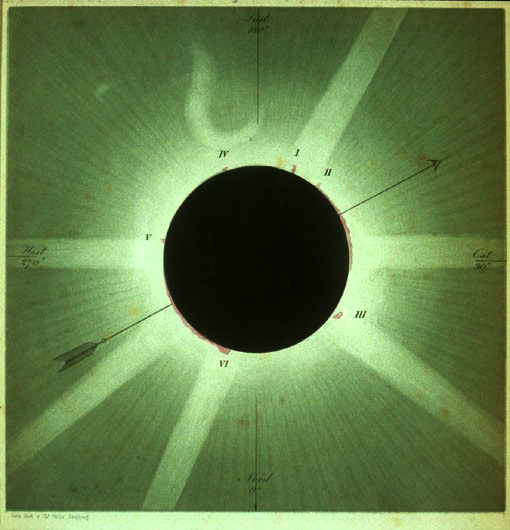 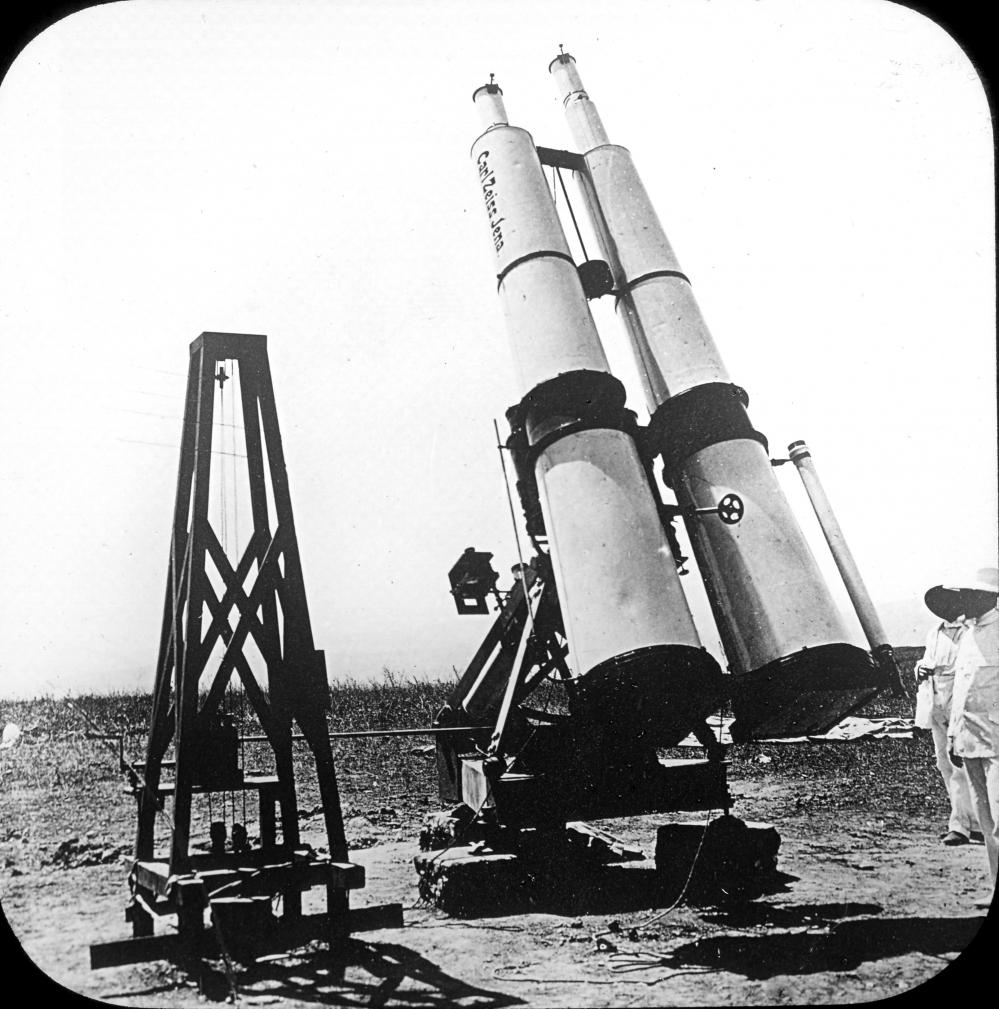 Highlights of activities of Millerntor Observatory were the solar eclipses expedition to La Plata, Spain (1860), and to Algeria (1905). 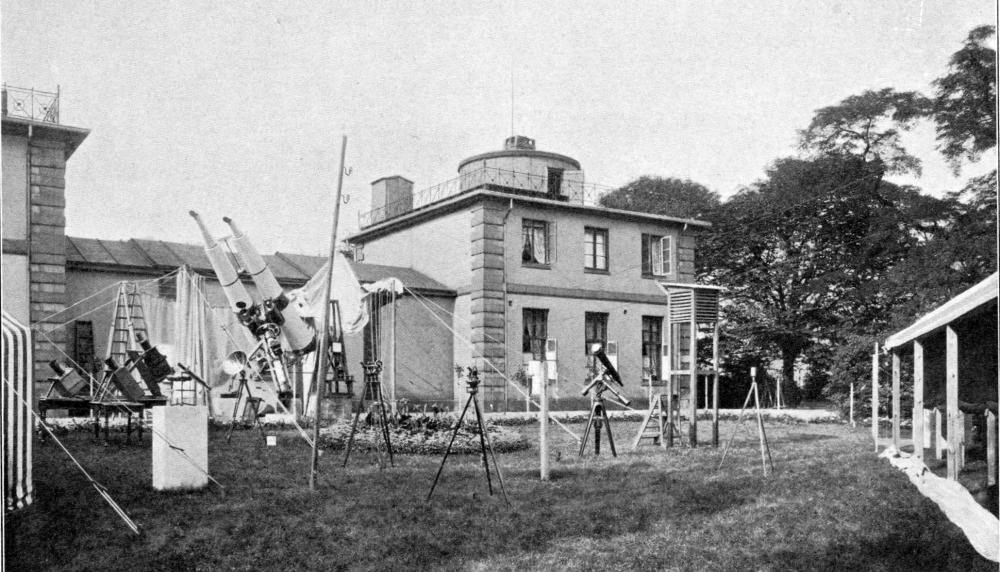 Fig. 6. Preparing the instruments for the solar eclipse expedition (1905) in front of Millerntor Observatory (Archive of Hamburg Observatory)

George Rümker, 1853-1854 in Durham Observatory in England, became the next long acting director of Millerntor Observatory from 1857/67 to 1900. He was very active in timekeeping and navigation; he was chairman of the examination board for mates (coxwains) and masters (captains). 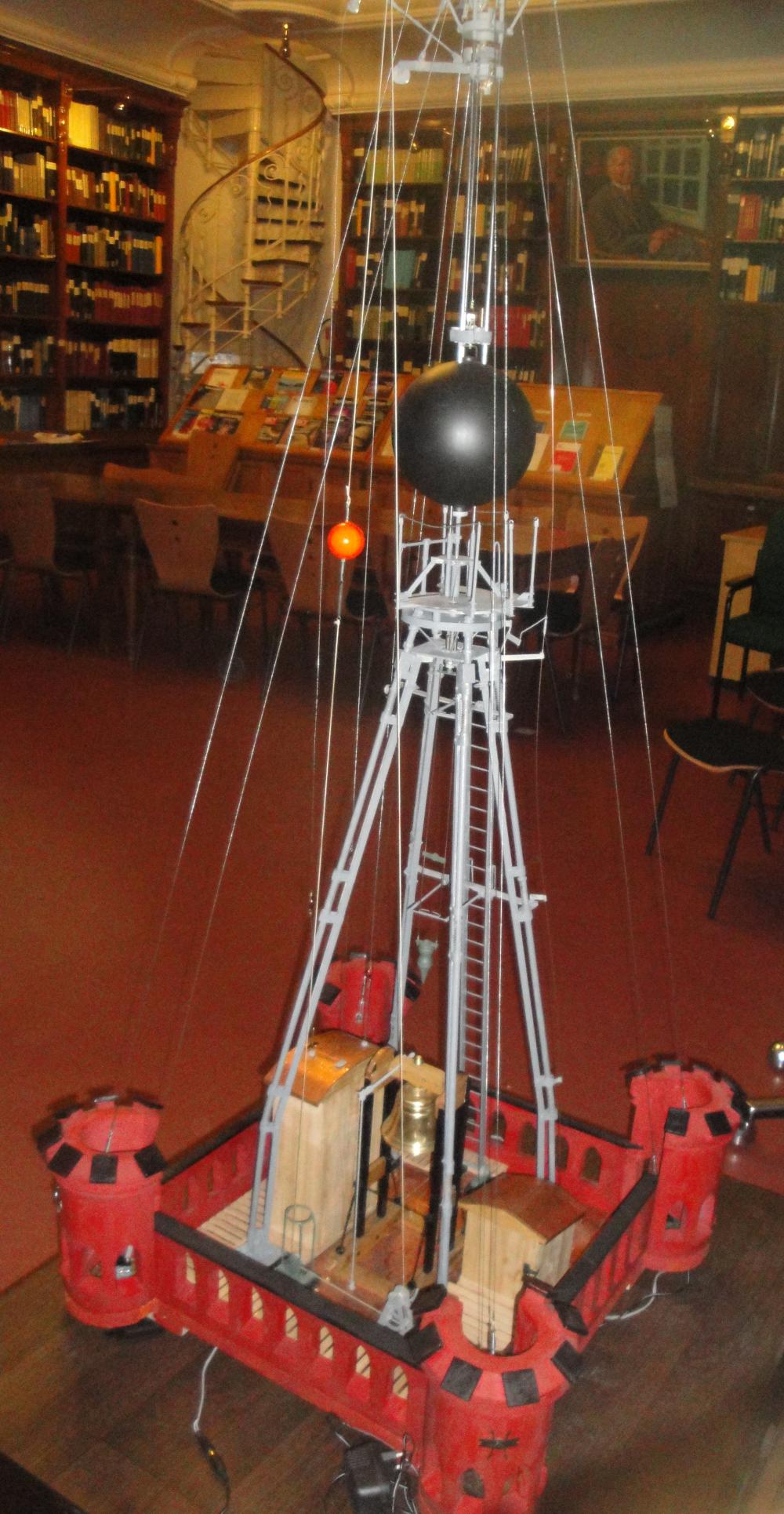 The topics of research in Millerntor Observatory were positional astronomy, time service system, time keeping for navigation and for the city normal clocks, and teaching in the navigational school.
An important task of the observatory was the determination of the time with transit instruments. Then the signal was transferred to the time ball, made by Carl Bamberg of Berlin; the time ball was placed on the top of a warehouse (Kaispeicher A, today place of the Elbphilharmonie) in the river Elbe in the port of Hamburg (Machoczek 2014). The time ball, a 1.5-m black ball, fell punctually at 1 pm Hamburg time three meters down, controlled by astronomical precision pendulum clocks in the observatory, the signal transferred via an underground cable, with an electric telegraph. 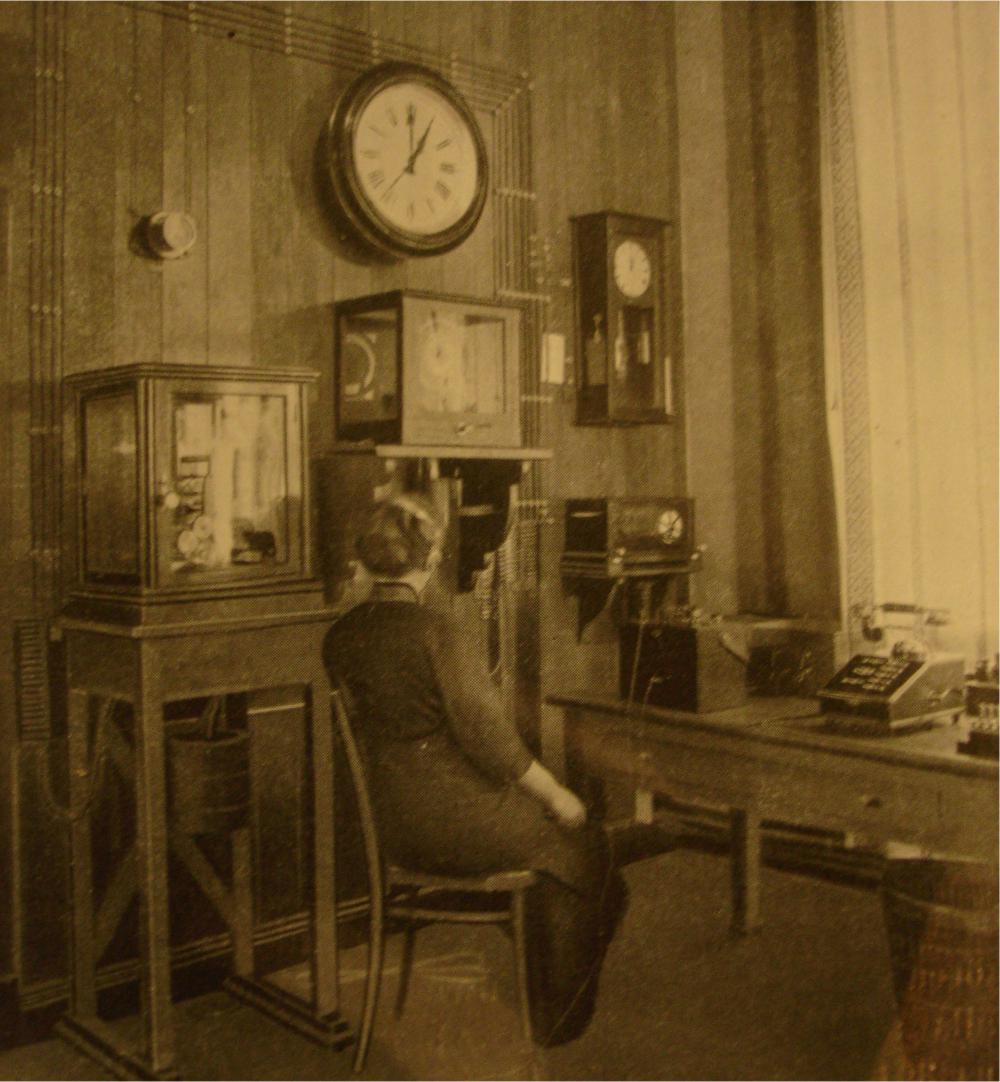 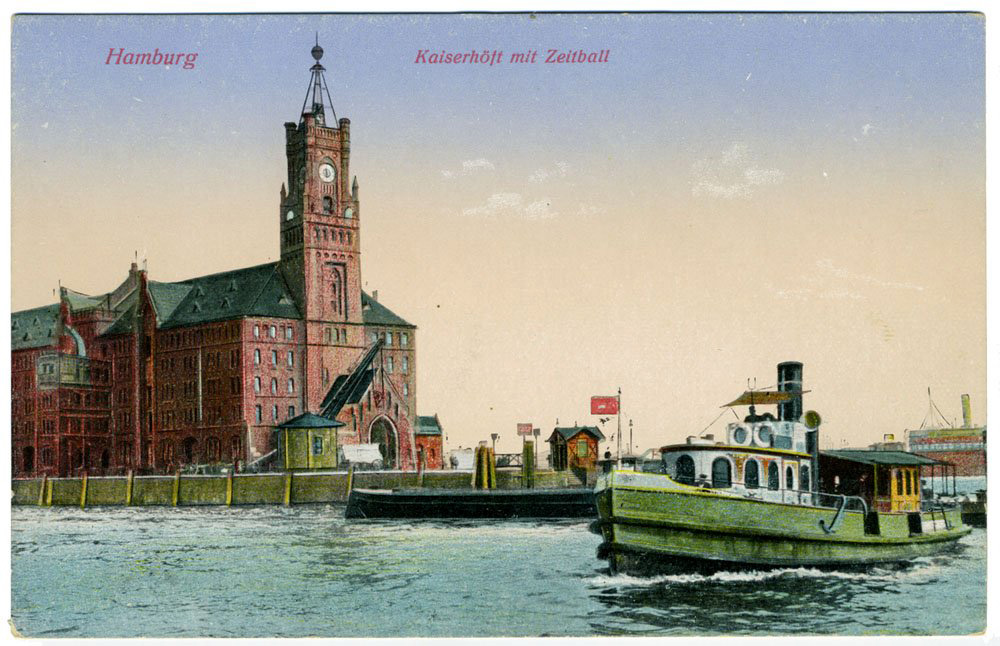 As early as in 1912, the time signal "ONOGO" was done for the first time with wireless (radio) signals - one year before Paris Observatory, using the Eiffel Tower as an antenna (November 1913).

Towards the new Hamburg Observatory in Bergedorf

A great change occurred at the turn of the 19th and 20th centuries. Richard Schorr (1867-1951), director from 1902 to 1941, made an astonishing contribution - far-sightedness he set the course for a whole new era, for successful moving the observatory outside of the city center to Bergedorf at the Eastern border, because at the old location on the wall, the measurements were too much disrupted due to scattered light, smoke and vibrations from the harbor, industry, traffic and the city illumination.

Directors of the Observatory 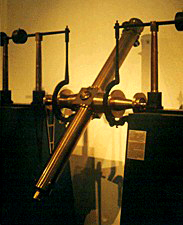 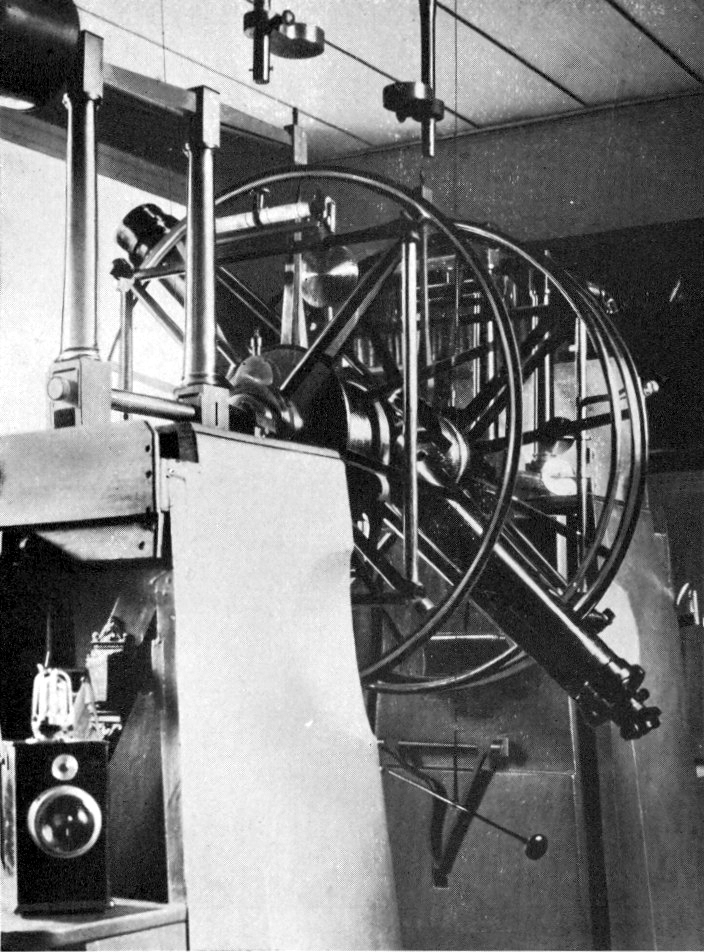 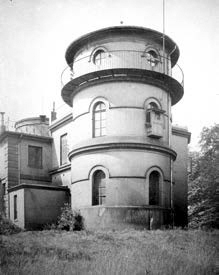 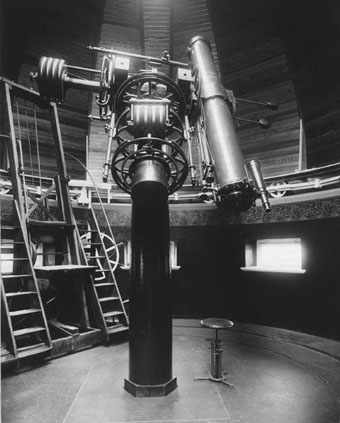 Johann Georg Repsold (1770-1830) was famous for his mechanical precision workshop for astronomical and geodetical instruments, founded in 1799 - the basis for the famous Repsold firm in Hamburg: A. & G. Repsold (since 1830) and A. Repsold & Söhne, 1867 to 1919. The workshop was first in the observatory, then in Herrengraben, since 1854 in the Böhmkenstrasse near the Michaelis church, later in the Borgfelder Mittelweg. The company delivered astronomical instruments (meridian circles, equatorial telescopes, heliometers, refractors, and geodetic instruments) to observatories all over the world; the optics was made in cooperation with the well-known Munich companies, Merz or Steinheil.

The first larger instruments were made for:

The Millerntor Observatory was demolished after 1912, when the new Hamburg Observatory in Bergedorf was ready. On the site, the Hamburg History Museum was built by Fritz Schumacher (1914 to 1922). But the monument for Johann Georg Repsold as founder of Hamburg Observatory and as head of the fire brigade, is still there in the original place.

The instruments, meridian circle, transit instrument, the solar eclipse expedition instruments, and the library were brought to the new Hamburg Observatory in Bergedorf (1912). Especially the equatorial refractor, including the dome, was moved to Bergedorf. There a new cylindrical building was erected and the dome reused. 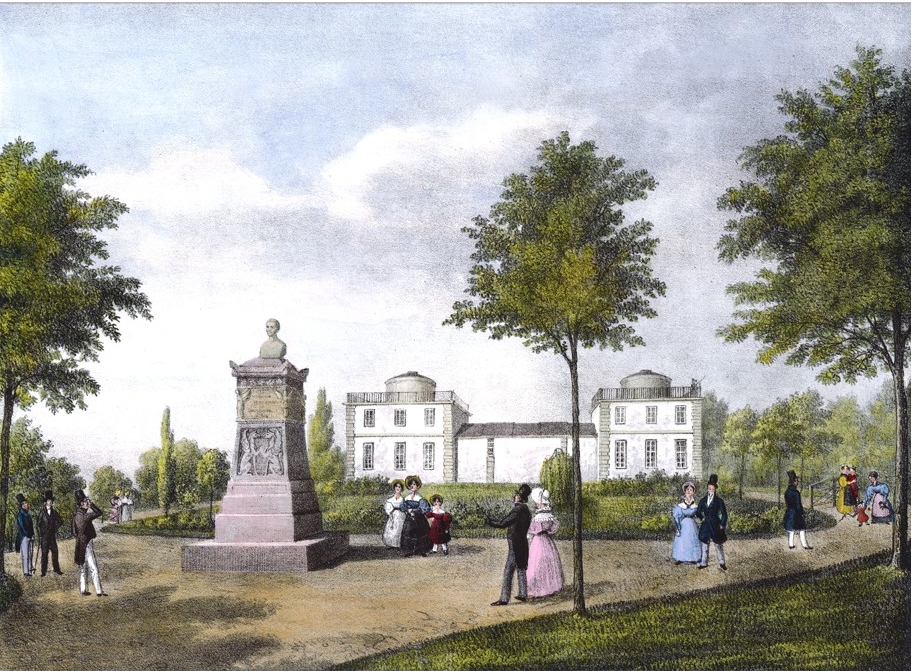 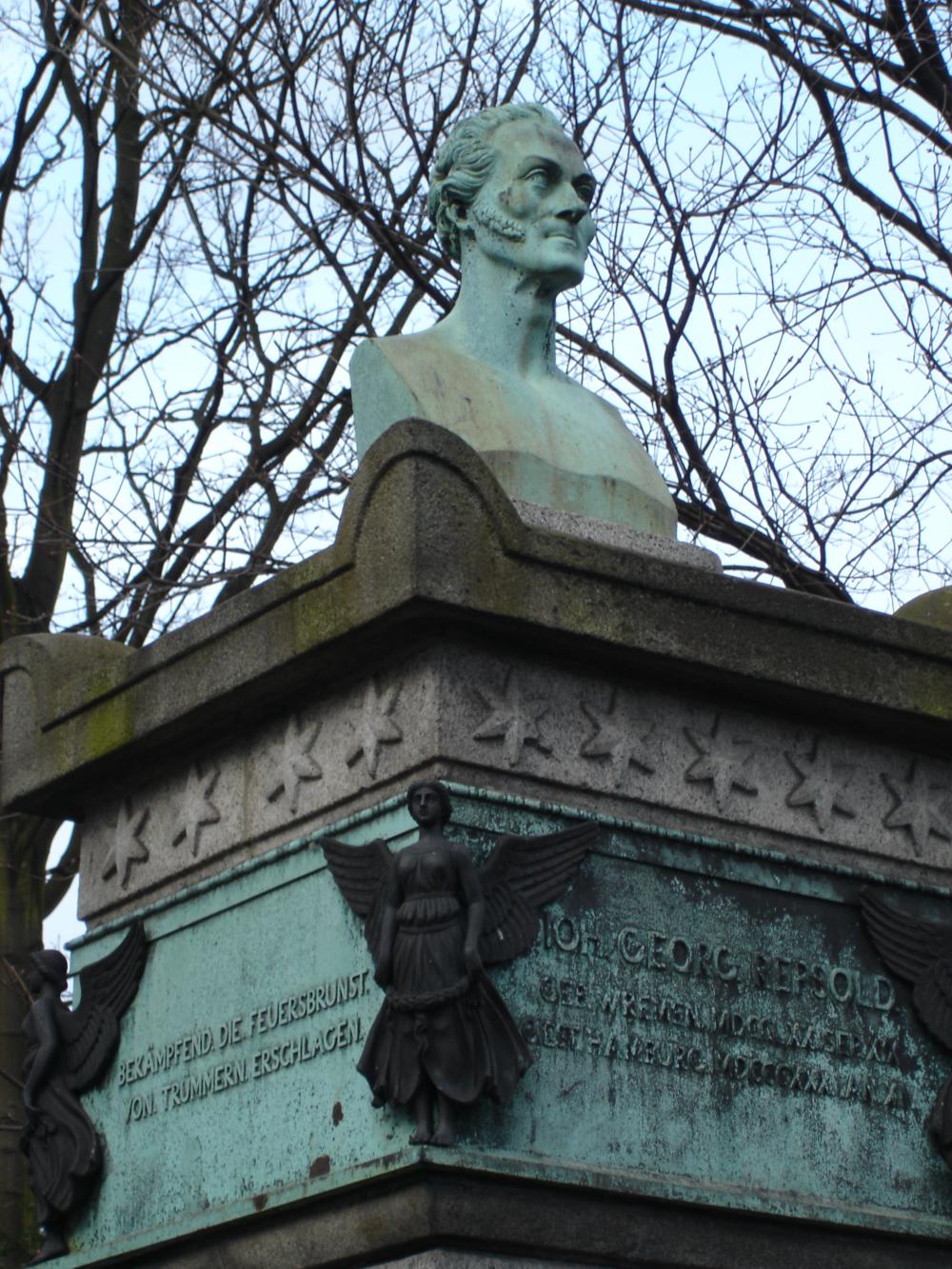 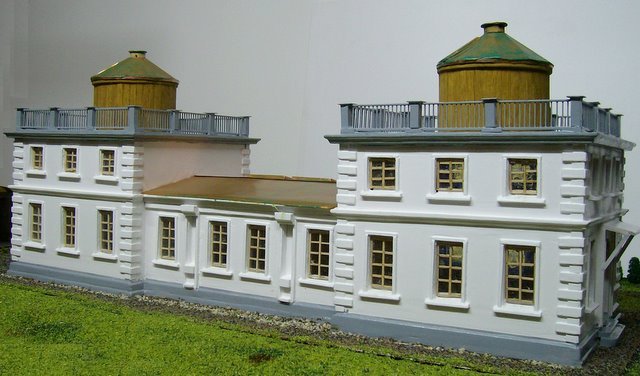 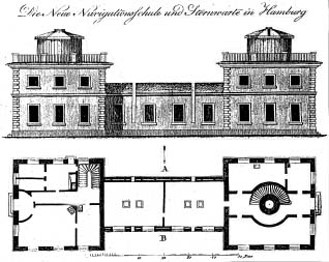 It is an observatory with two domes, that is rare, I know only one example, the old Brussels Observatory in Sint-Joost-ten-Node (1828--1891), which looks very much like the building of Millerntor Observatory. The reason for the two domes in Hamburg: there was one dome for the observatory and one for the navigation school.

Another example is the Royal Observatory, Cape of Good Hope, the more complicated footprint is like an H with a dome on each side.

In that time very often one dome was used for smaller observatories in the beginning of the first half of 19th century like in Gotha, Göttingen, Oslo (the buildings in the shape of a cross). Afterwards it was typical to have a rectangular building and three domes like first used in Helsinki, Kazan, and Pulkovo, St. Petersburg and throughout the 19th century.

no longer existing, but instruments, library and archive are preserved in the new observatory.

no longer existing, only the monument for Johann Georg Repsold reminds of the history, and at some other places one finds art works in memory of Millerntor Observatory and of the astronomers. 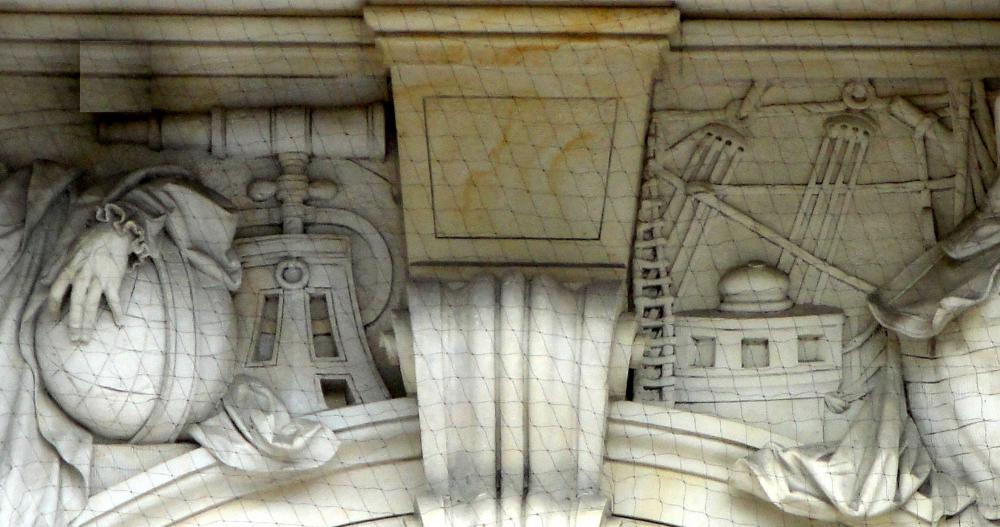 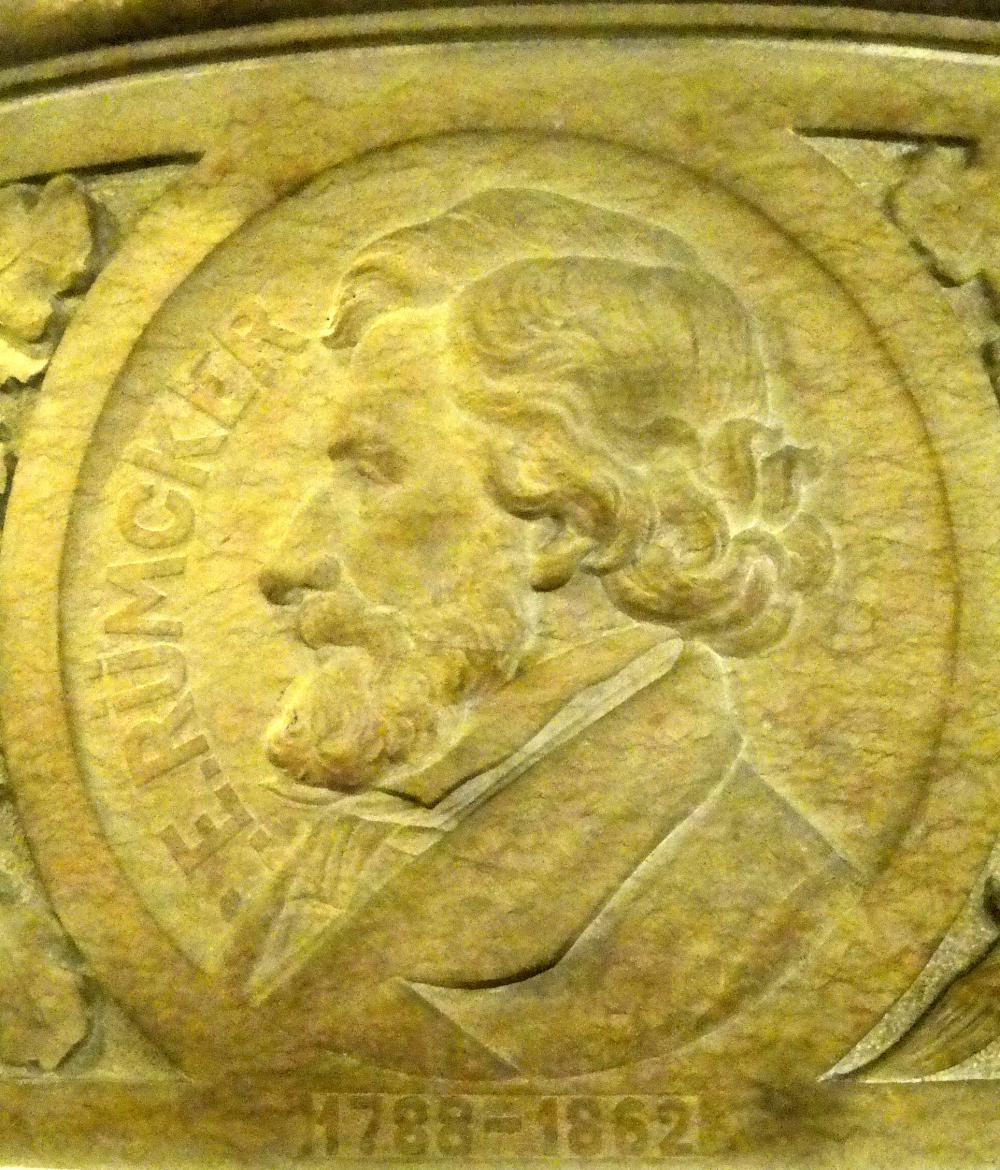 Important star catalogues were published and comets detected.
A crater on the moon was named in memory of Johann Georg Repsold.
Mons Rümker is named after Christian Karl Ludwig [Charles] Rümker, the first director of Millerntor Observatory. 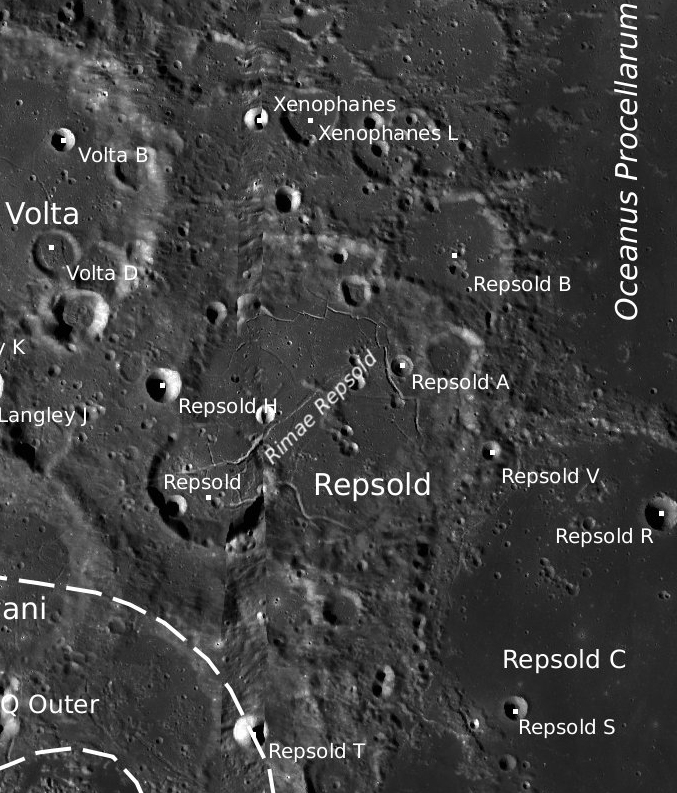 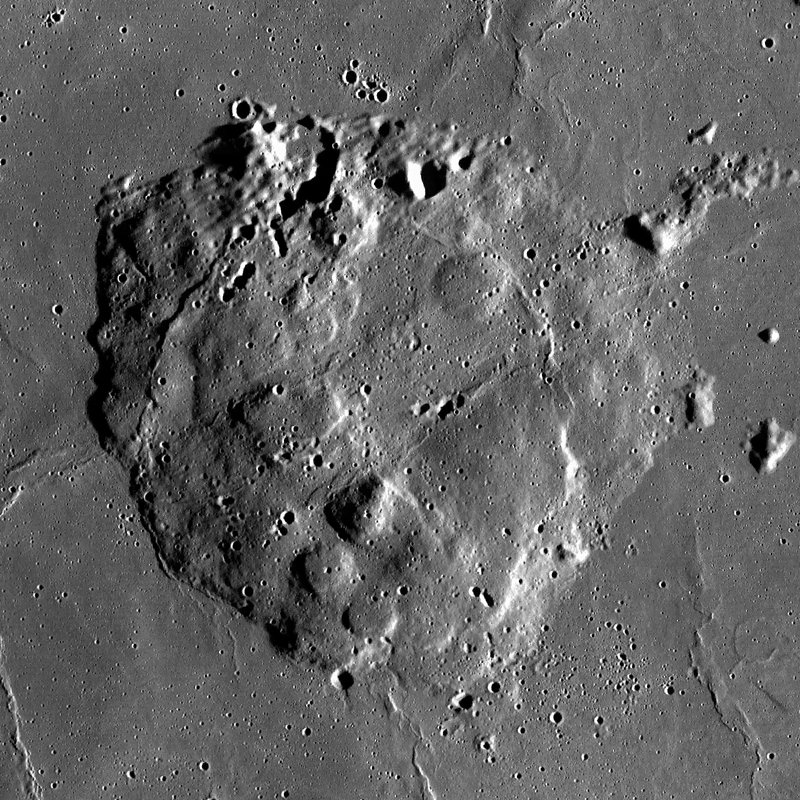