In 1550, the Jesuit Order was called to Vienna by Ferdinand I (1503--1564), Holy Roman Emperor from 1556 to 1564.
In 1623, the Jesuit College was incorporated into Vienna University. In 1714, the Jesuits set up the "Museum Mathematicum", which was equipped with instruments for optics, astronomy, geography, geometry, and a collection of terrestrial and celestial globes.

In 1733, at the suggestion of the astronomer Johann Jakob von Marinoni (1676--1755), the Jesuits built an observatory in the form of a 45m high tower on the Jesuit College building at Bäckerstraße / Postgasse. This was Vienna’s first permanent observatory, albeit still with very modest facilities, which was finished in 1734. The main scientific activities were position measurements of the stars (astrometry). 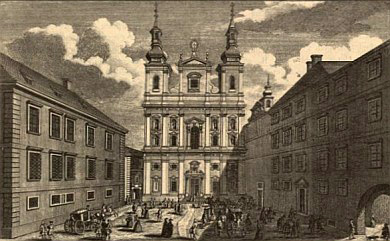 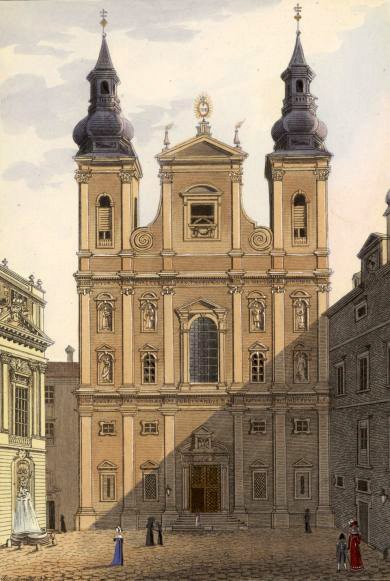 From 1734 to 1750, Father Joseph Franz (1704--1776), Professor of mathematics, experimental physics and astronomy, carried out extensive astronomical observations and was assisted from 1745 by Maximilian Hell (1720--1792), a novice of his order. Joseph Franz also devoted himself to the study of the nature of electricity (De natura electricitas, 1751).

Jozef Ksaver [Joseph Xaver] Liesganig (1719--1799), another member of the Jesuit Order, also devoted himself to astronomical observations in addition to his work as a mathematics professor at the university (1752). He was entrusted with the direction of the Jesuit Observatory in 1756, and held it until the liquidation of the order in 1773. Then, the former Jesuit Observatory in Vienna merged into the University Observatory Vienna. 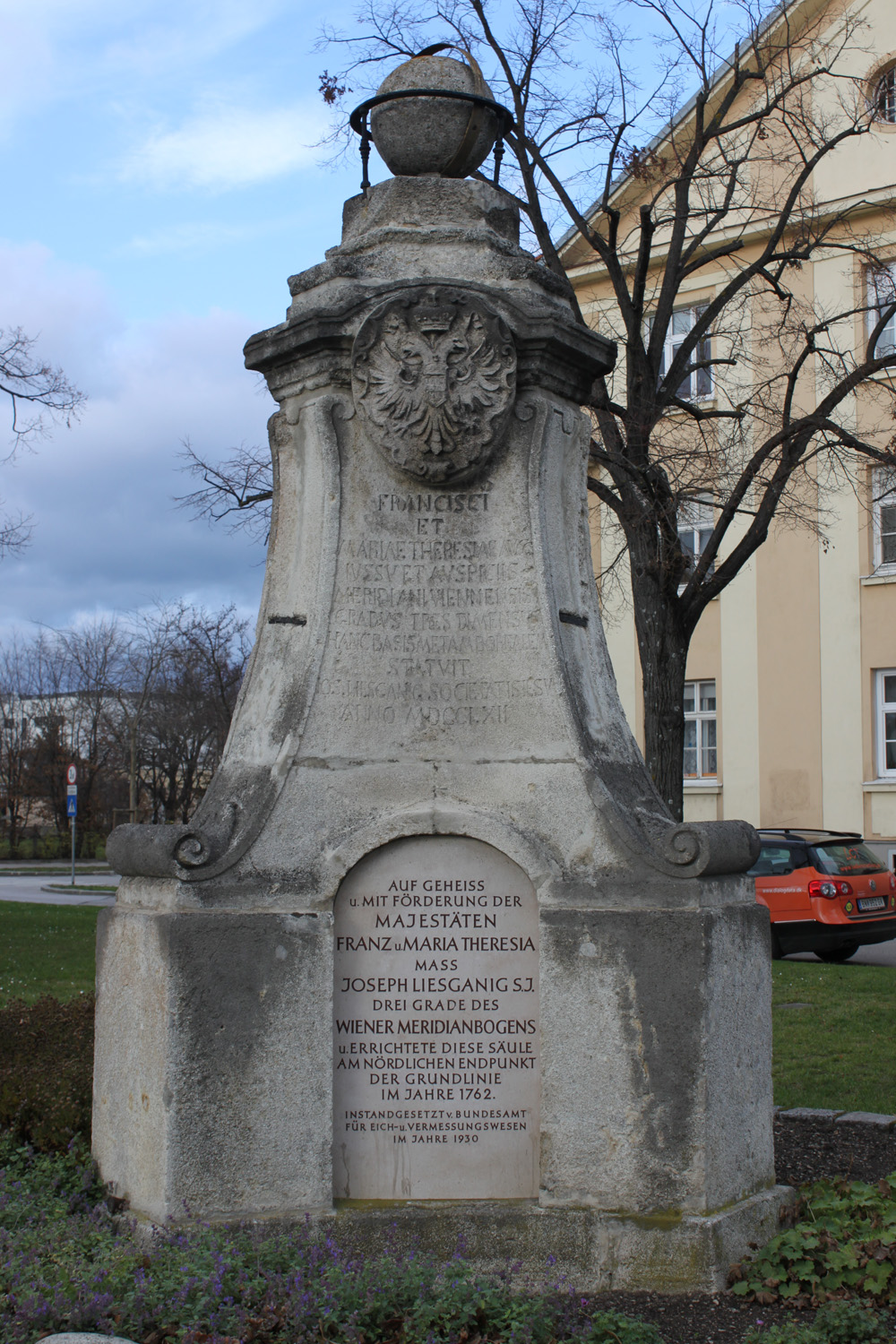 Liesganig was active not only as astronomer, but also as surveyor and cartographer. In 1757, he determined the latitude of Vienna with his 10-foot-zenith sector. In 1761 to 1765, Liesganig was commissioned by Empress Maria Theresa to measure the Viennese meridian; the result was the measurement of a 320km long meridian arc from Brno via Vienna to Varasdin. In the years 1766 to 1769, he determined the Hungarian reference meridian.
As a basis for the triangulation, Liesganig chose the distance between Wiener Neustadt and Neunkirchen, which is now known as the Wien -- Neustädter Grundlinie (base line).
Due to Liesganig’s special geodetic achievements, the Vienna observatory became Austria-Hungary’s longitude reference point, which was later transferred to the new University Observatory.

In 1761 and 1767, he observed the rare phenomenon of the Transit of Venus from Vienna.
Liesganig with the participation of the famous astronomer Franz Xaver von Zach (1754--1832) of Hungary, since 1787 in Gotha, Germany, made a trigonometric survey in Lwiw (Lemberg) Observatory, Galicia, today Ukraine, and reduced the data to the meridian of this observatory.

In 1773, the Jesuit Order was suppressed by decree of Pope Clement XIV, which ended the Viennese Jesuit College and the Jesuit Observatory. 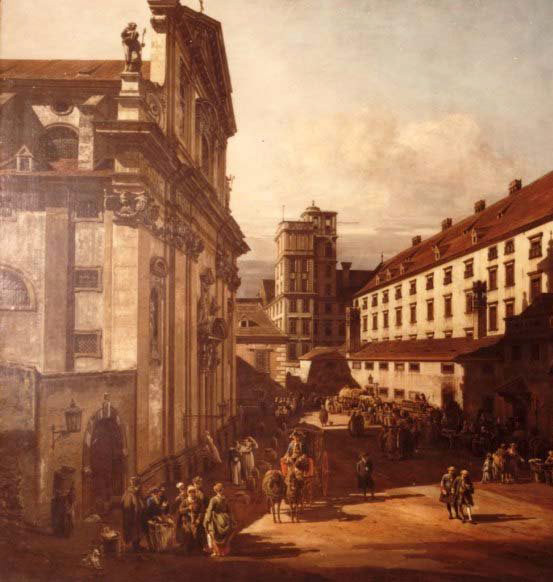 Fig. 4a. Jesuit Observatory Vienna (1733), Mathematical Tower in the centre, on the right the Jesuit Academic College (today Postgasse 7), on the left the Dominican Church (Painting by Bernardo Bellotto (Canaletto) 1759 in the Kunsthistorisches Museum in Vienna (Archiv der Universität Wien, Bildarchiv Signatur 106.I.266) 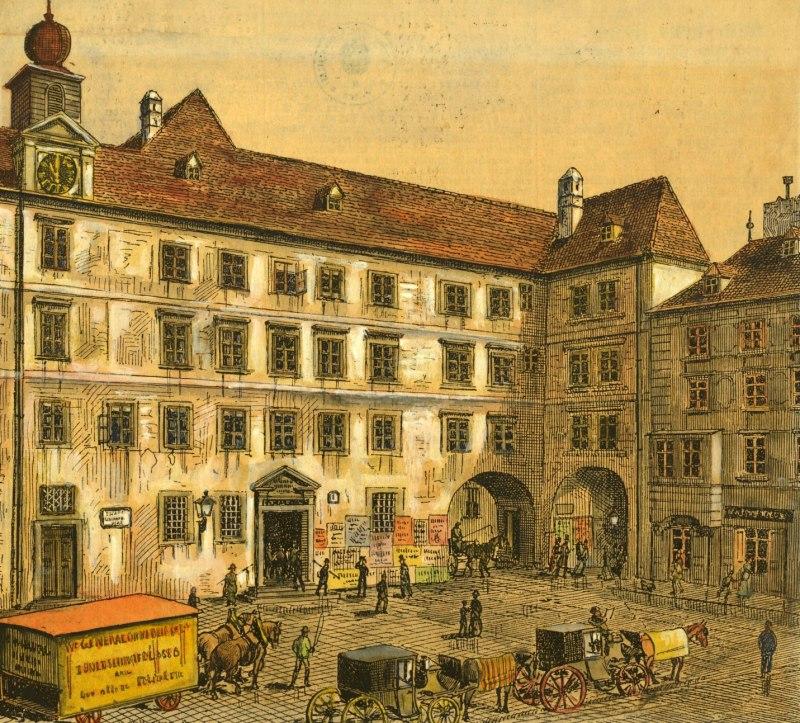 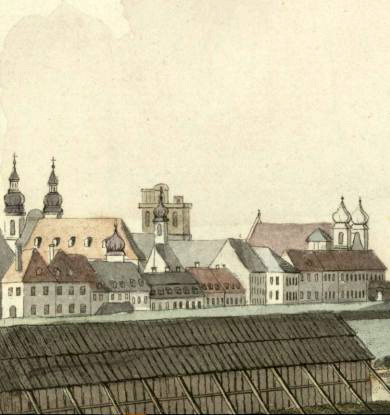