The Russian amateur astronomer Nikolai Sergeevich Maltsov / Sergei Ivanovich Maltsov (1810--1893) (asteroid 749 Malzovia, discovered in 1913 by Belyavsky at the Simeiz Observatory) built in 1900 a tower for a refractor of his private observatory near Simeiz, in 1906, and another tower for the Zeiss double astrograph. In 1908, he donated his observatory to Pulkovo Observatory and it became a southern branch of Pulkovo, Saint Petersburg, as Astrophysical Observatory (1912).
This was the beginning of Simeiz Observatory on the 360m high Mount Koshka (the Cat), Crimea (1908/12) and it was active until the mid-1950s. 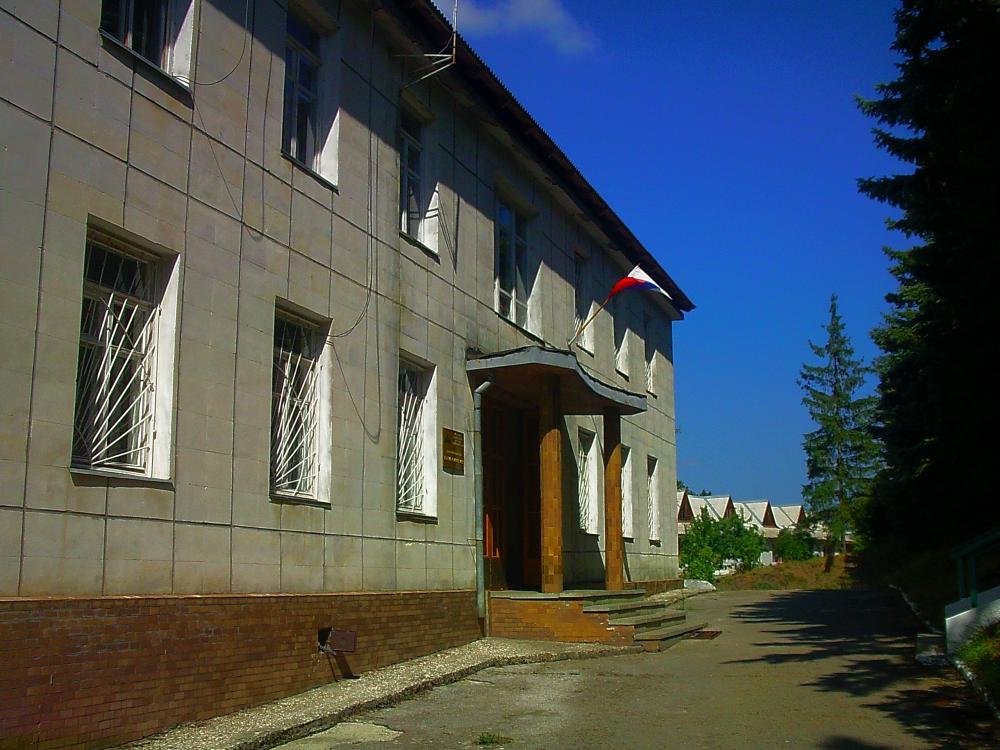 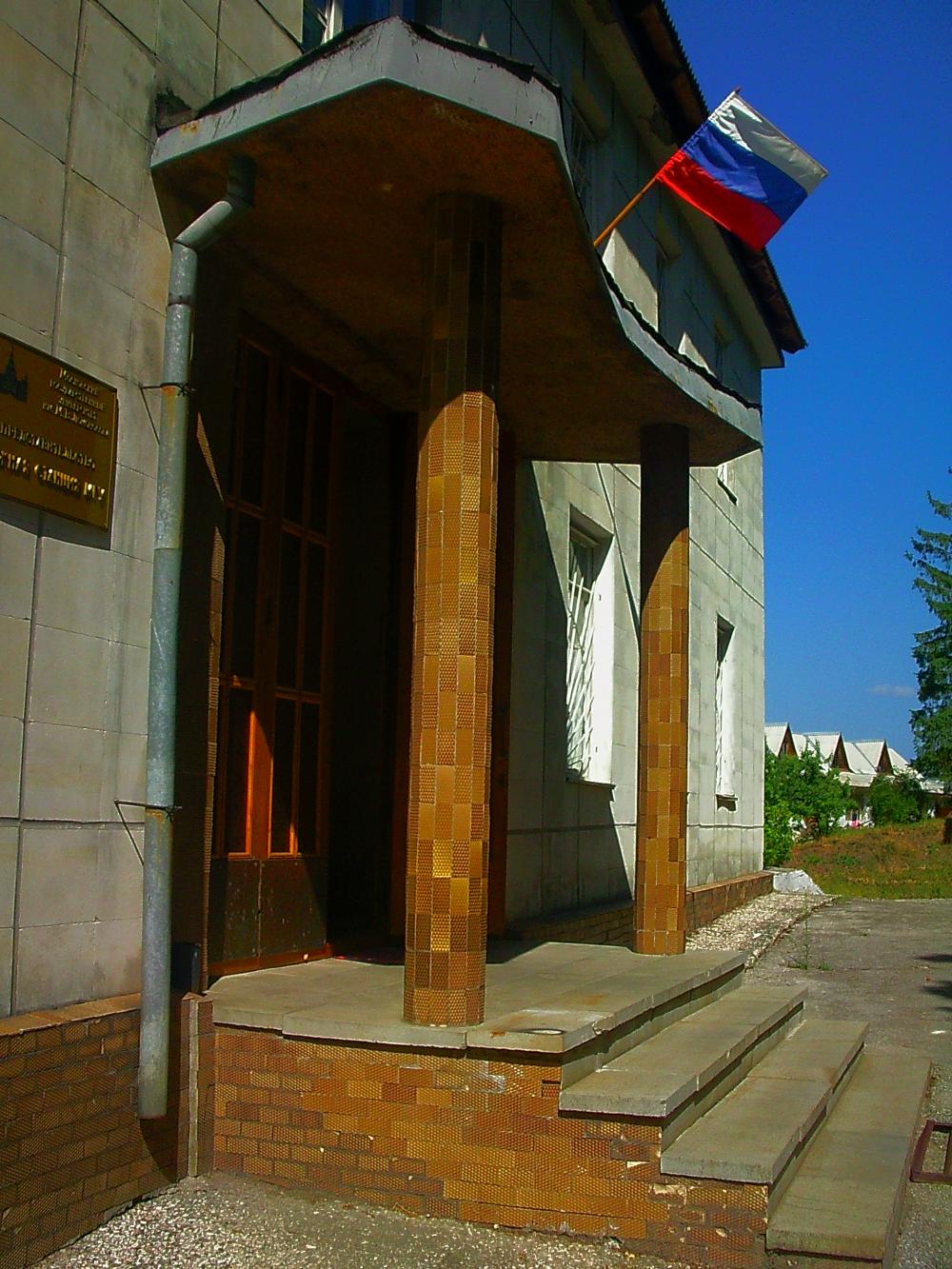 After being destroyed in World War II, it was restored until 1948. The 122-cm-reflector telescope of the former Berlin-Babelsberg observatory was also dismantled as a reparation payment for the destroyed 1-m-reflector and rebuilt together with its dome in Simeiz. 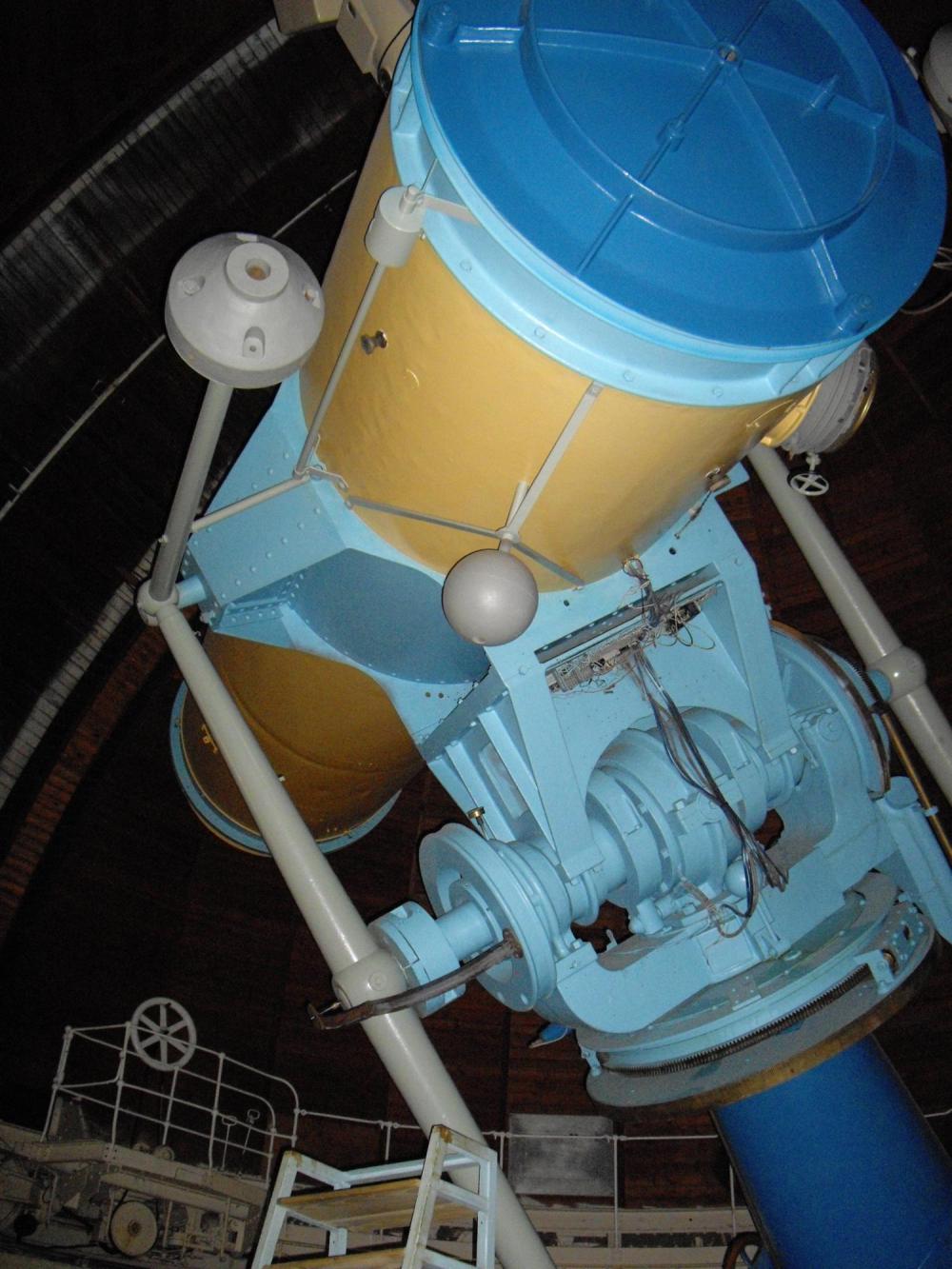 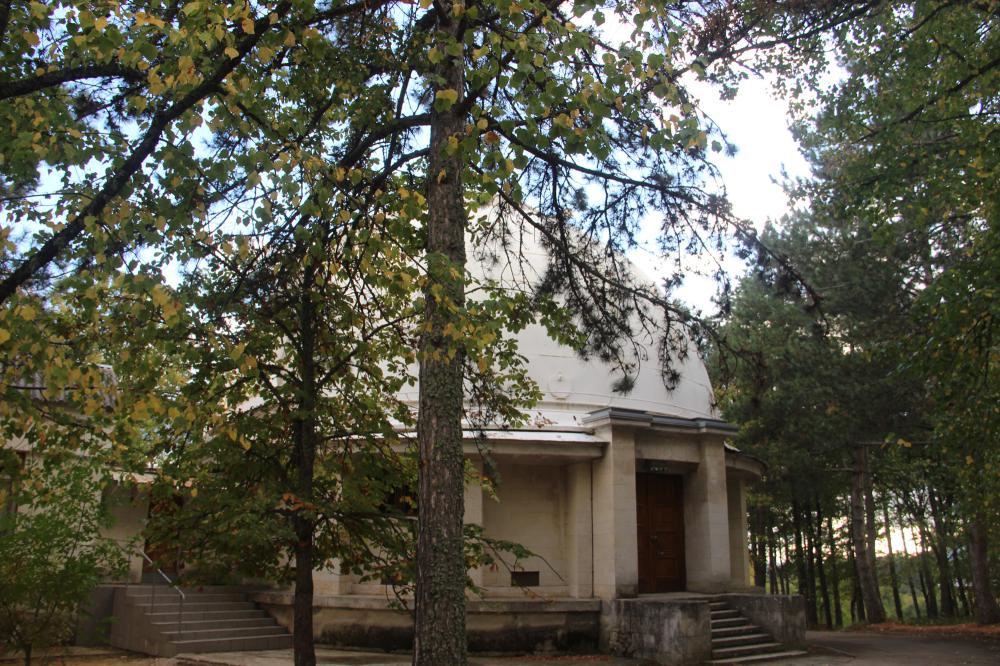 But the Soviet Government decided to build in addition a new modern observatory -- in much better climate -- on the northern slopes of the Crimean mountains, the Crimean Astrophysical Observatory Nautschnyj (CrAO) and it came under auspices of the Academy of Sciences of the USSR (1945).

Grigory Abramovich Shajn (1892--1956) was appointed as first director, 1945 to 1952. The 40-cm-double-astrograph, the 122-cm-reflector, and the Lyot-coronagraph were received from Germany as reparations. Shaijn and Vladimir Aleksandrovich Albitzky (1891--1952), the former director of the Simeiz observatory from 1934 to 1945, started spectral observations of radial velocities of the stars, which contributed to the fame of the observatory.

The research topics of the new observatory are solar physics, observation of binary systems, radial velocity of stars and the study of quasars. The CrAO published the "Bulletin of the Crimean Astrophysical Observatory" since 1947, in English since 1977.
The Minor Planet Center (MPC) gives a total of 1286 numbered minor planets that were discovered at the Crimea-Nauchnyj Observatory (CrAO) site during 1966--2007 by the astronomers Grigory Neujmin, Sergey Belyavsky, Vladimir Albitsky, Grigory Shajn, Nikolaj Ivanov, Pelageya Shajn, Praskov’ja Parchomenko, Alexander Deutsch and Evgenij Skvorcov. 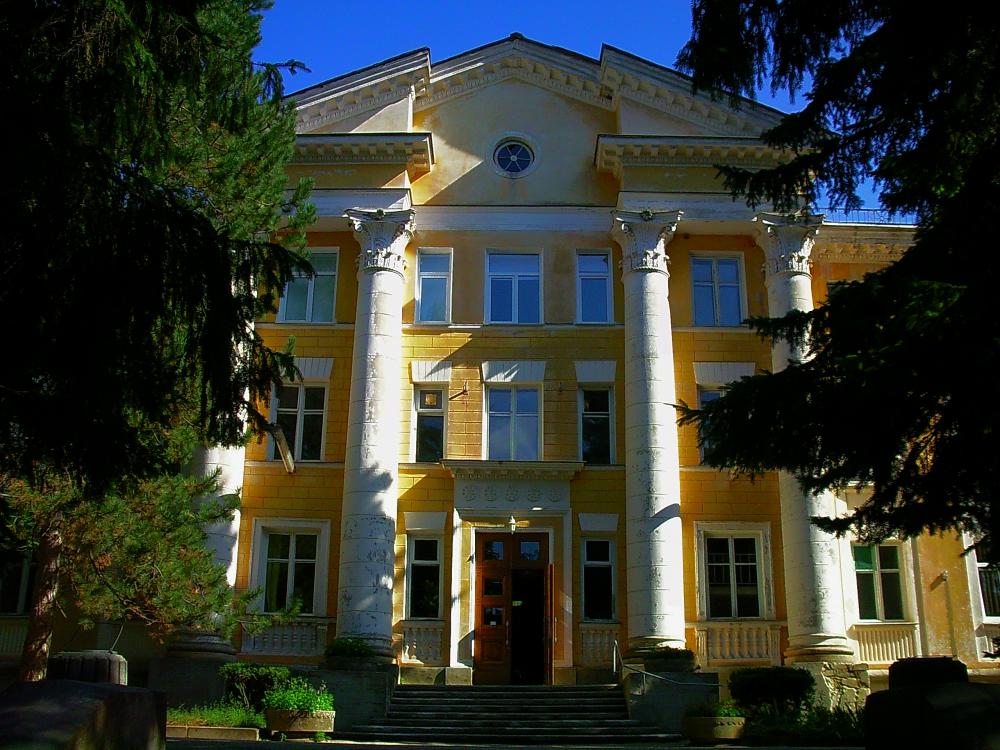 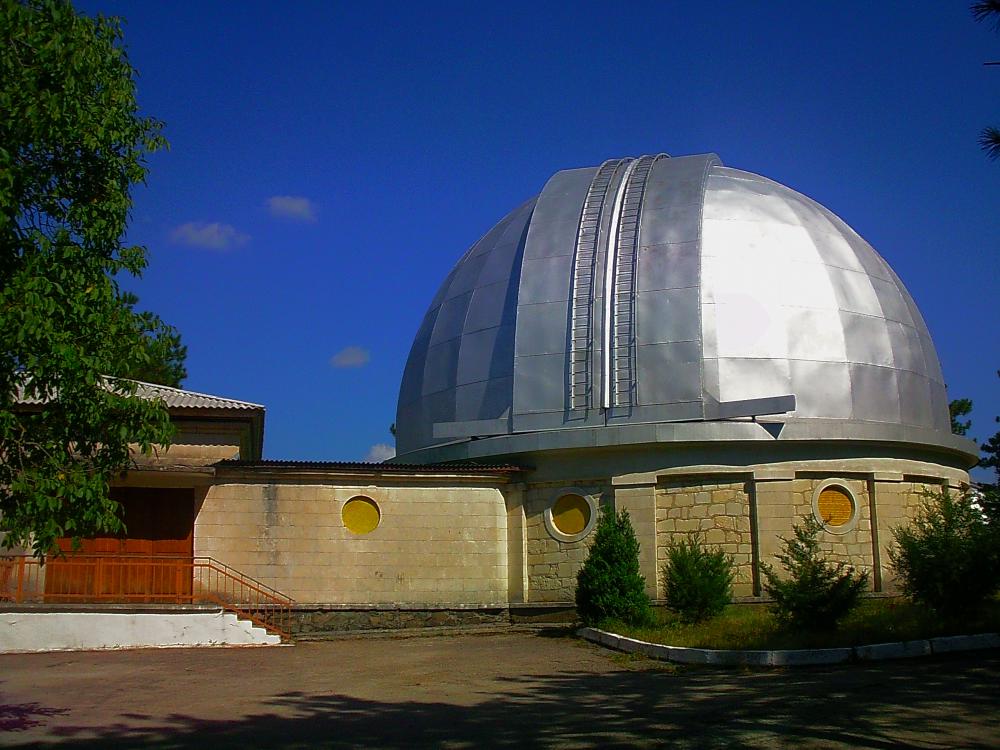 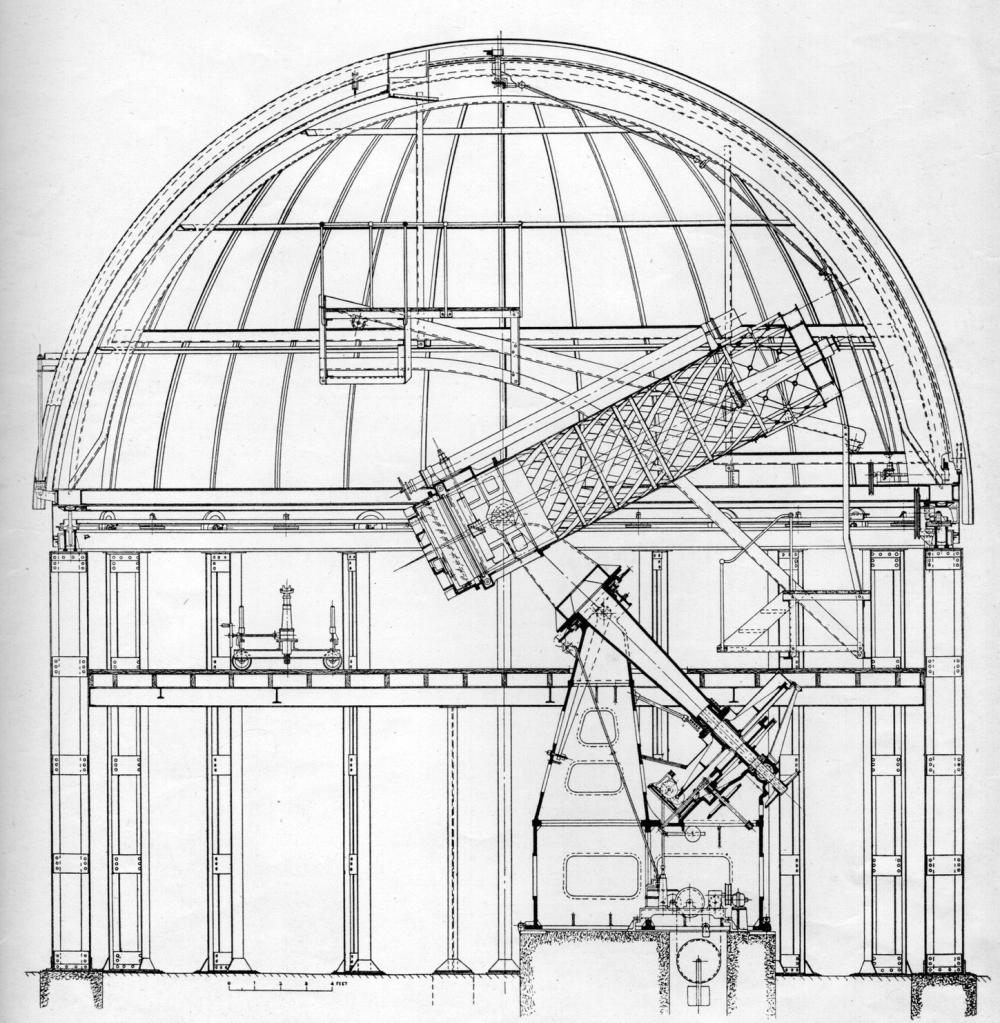 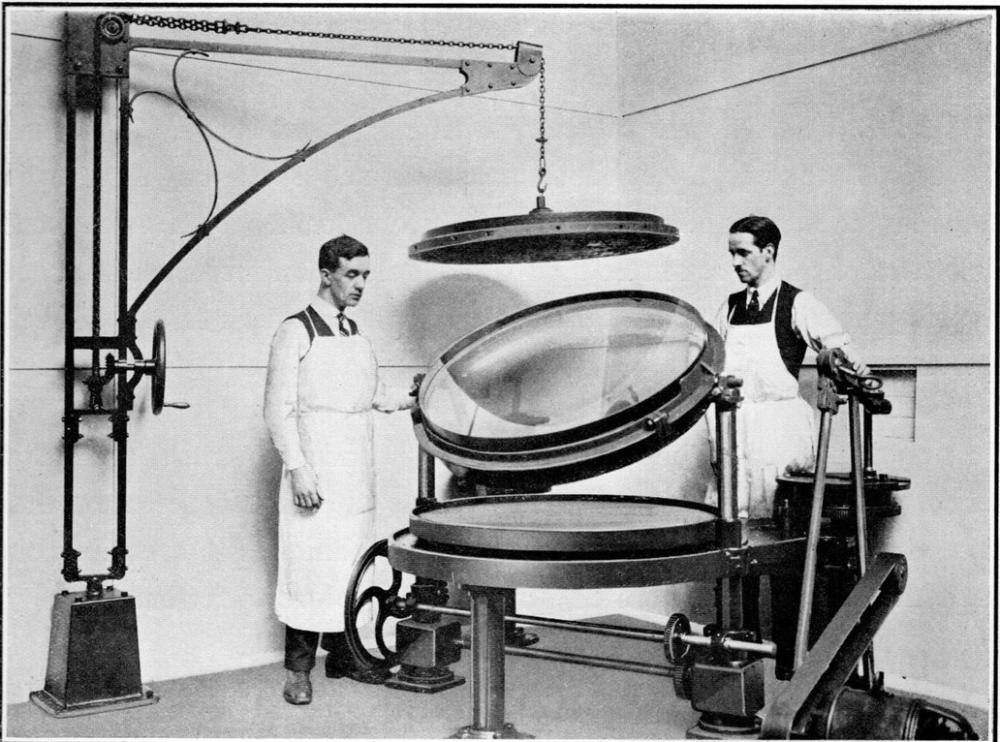 Fig. 4b. The parabolic great mirror of the 1-m-Reflecting telescope, made by Grubb Parsons of Newcastle upon Tyne (1926), Simeiz Observatory (Sir Howard Grubb, Parsons & Company, Publication No. 4 (1926), p. 12) 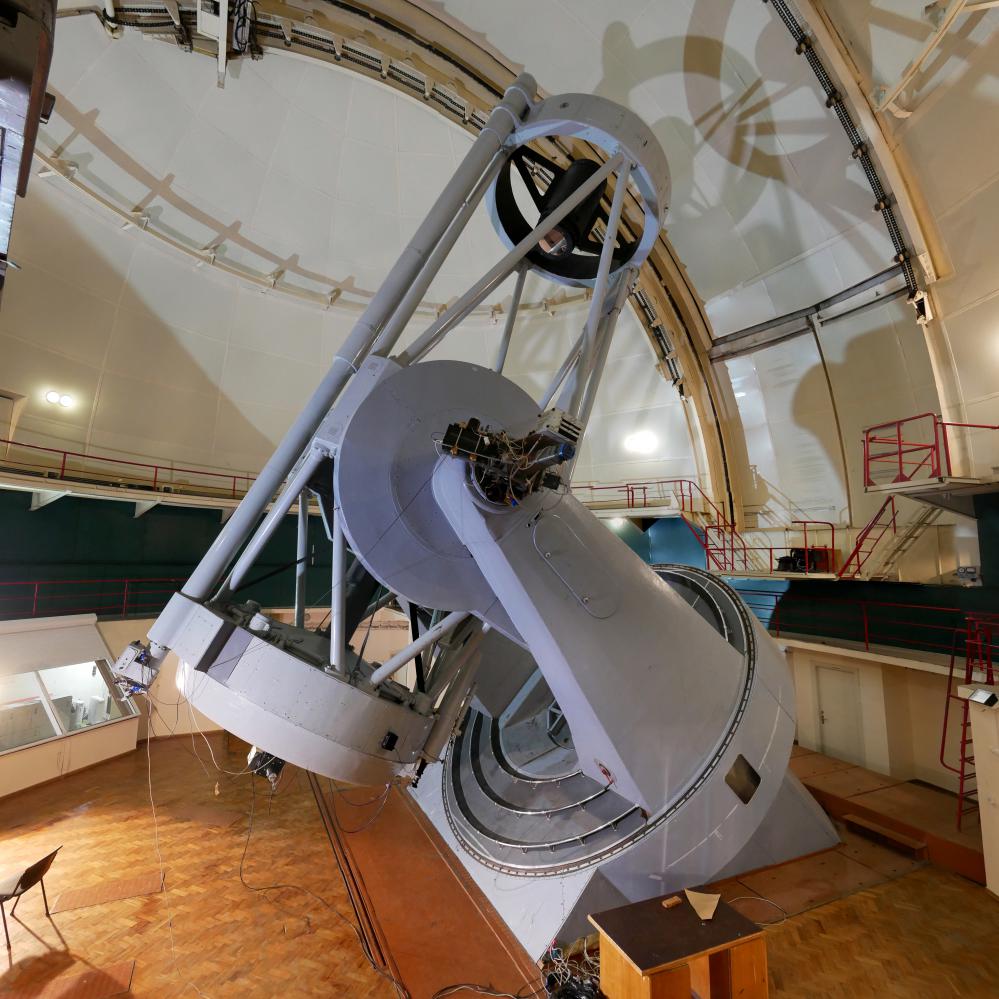 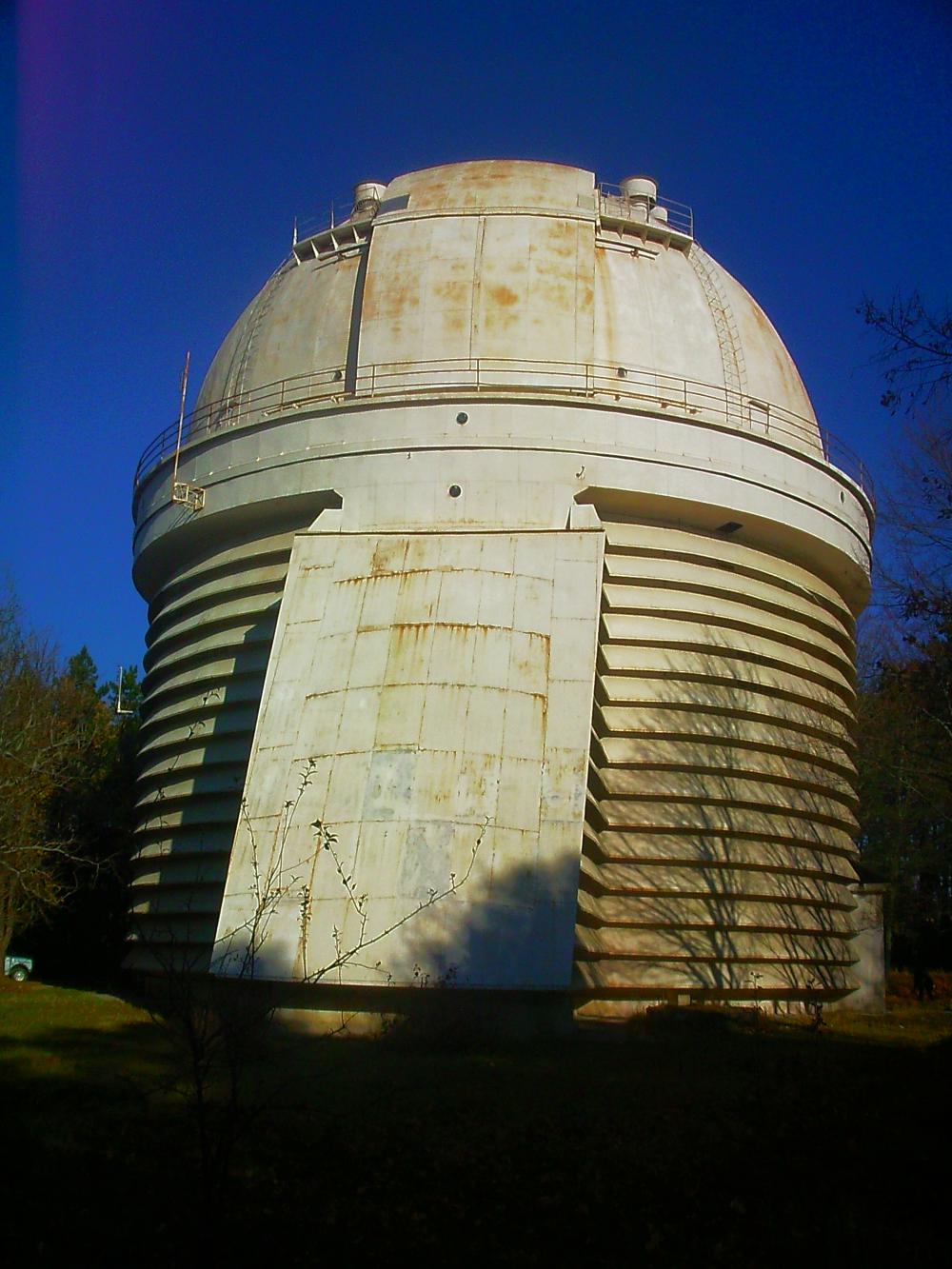 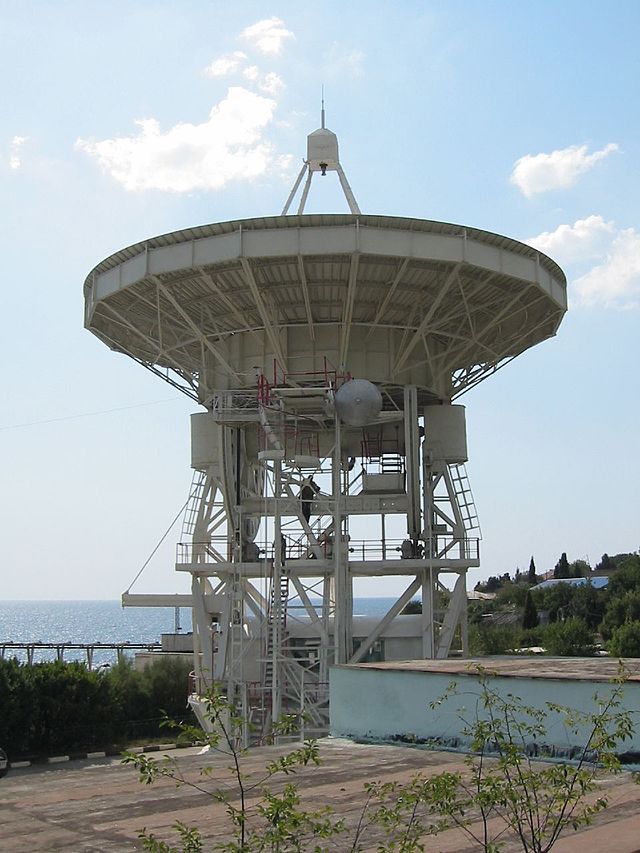 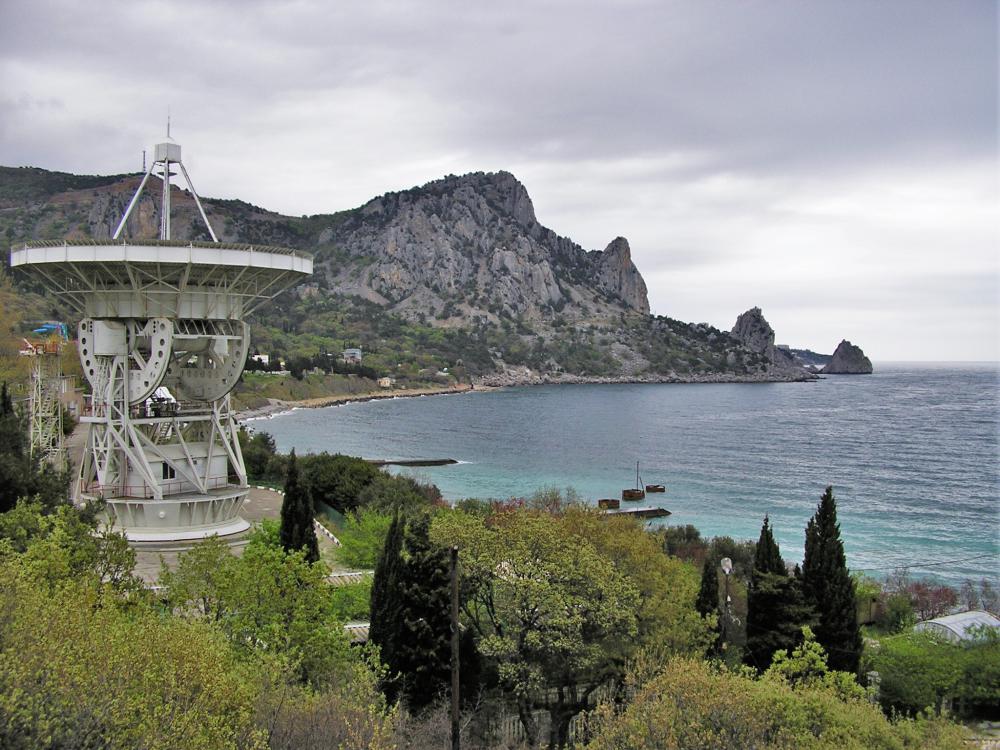 The Department of Radio Astronomy of the CrAO in Kaciveli [Katsiveli], Crimea, was founded in the 1960s. 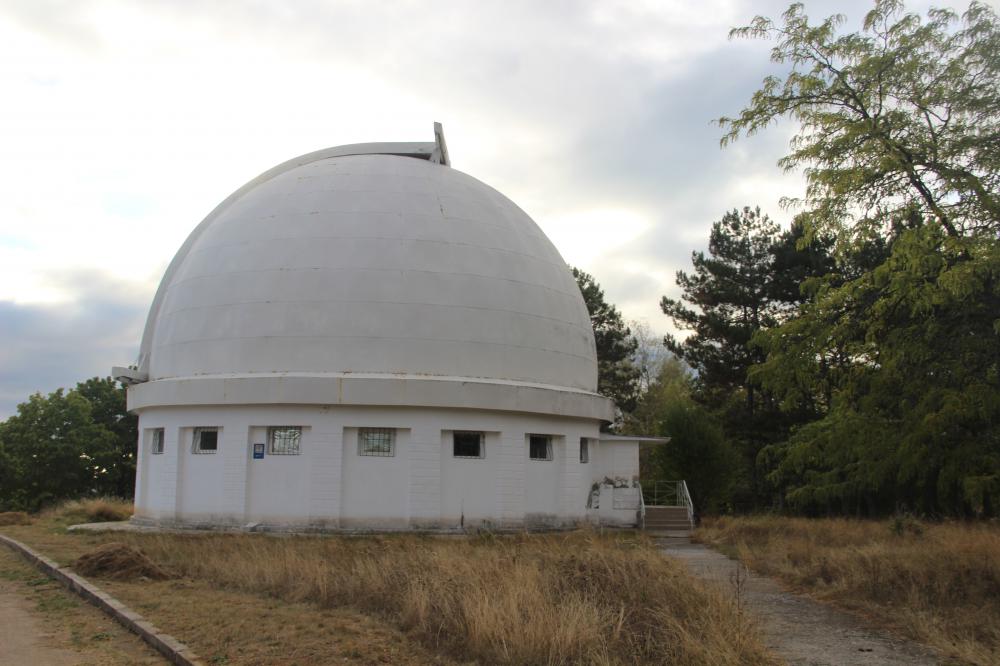 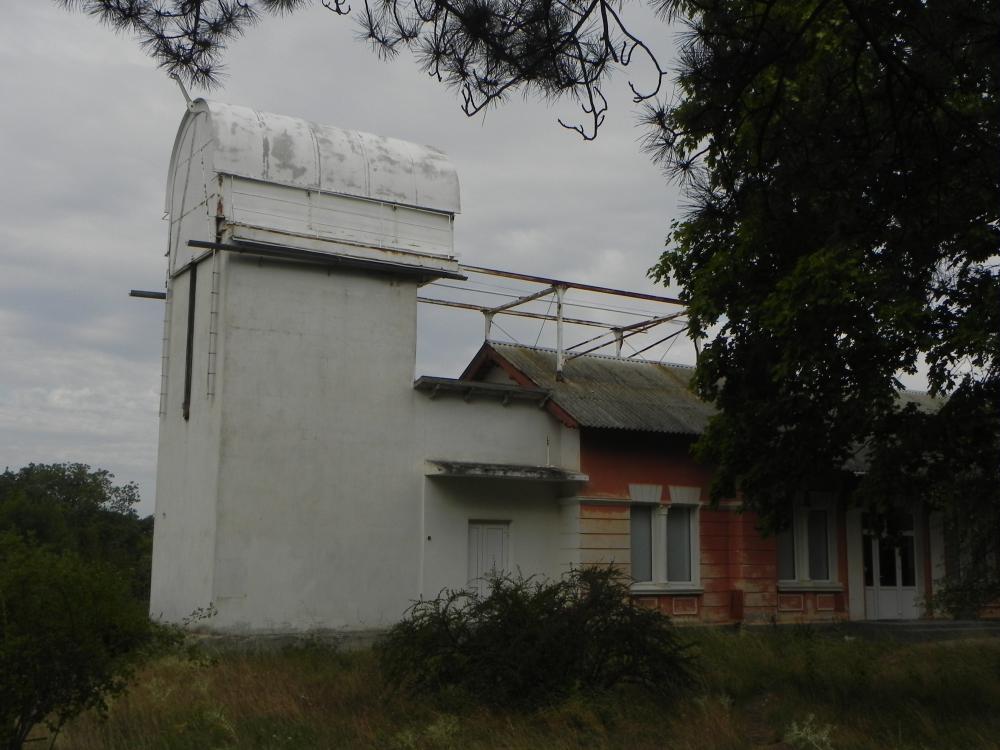 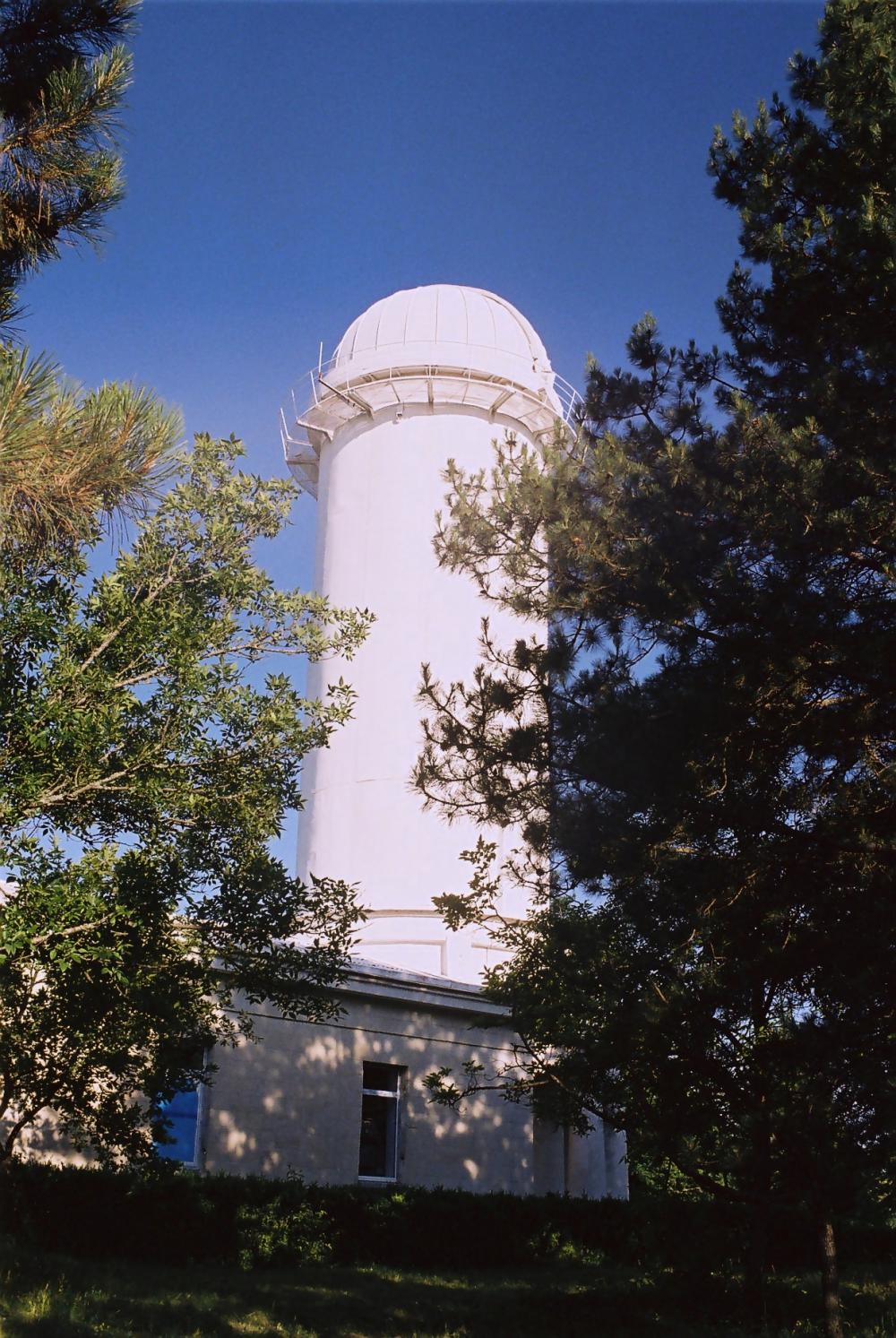 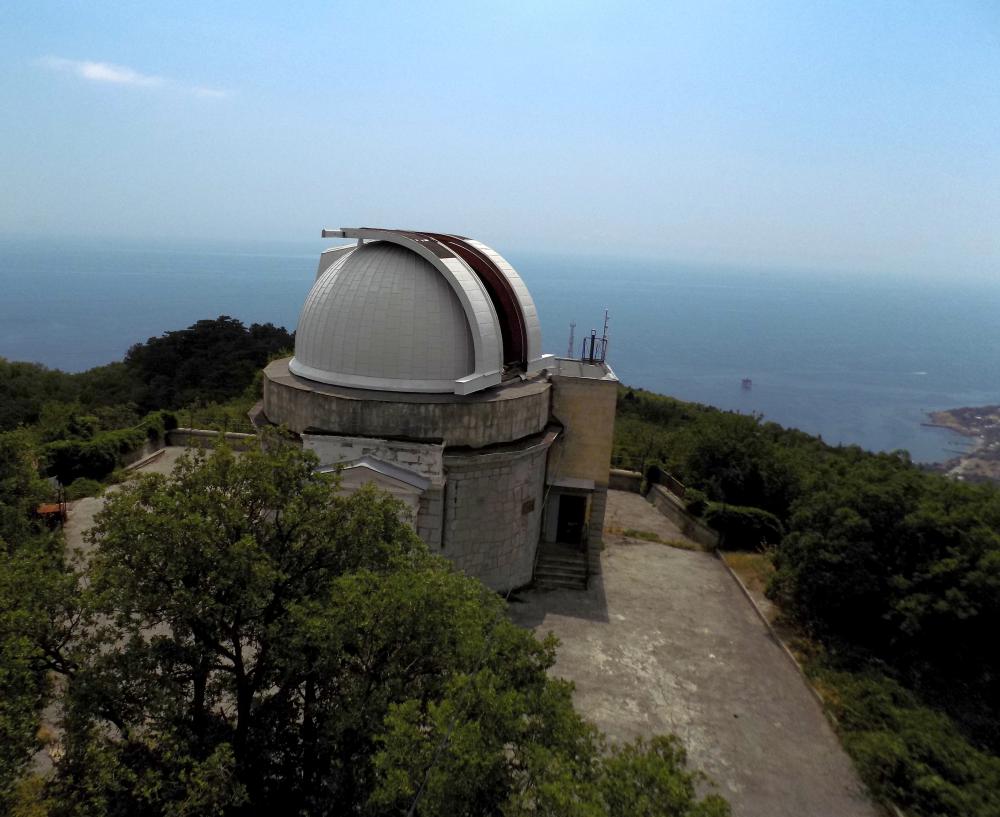 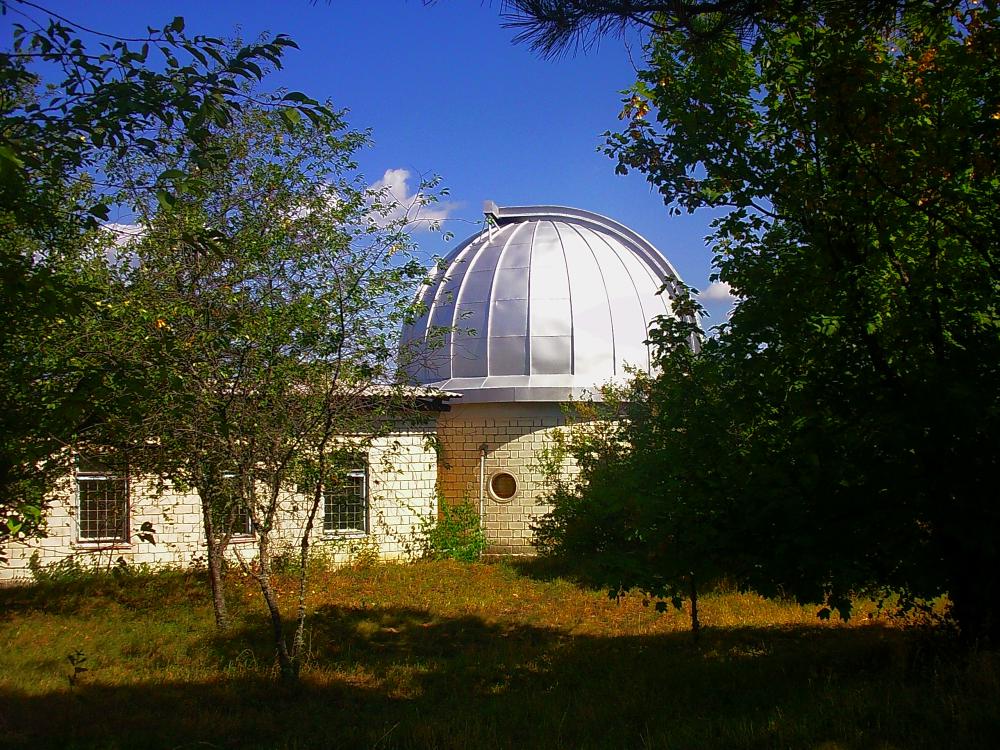 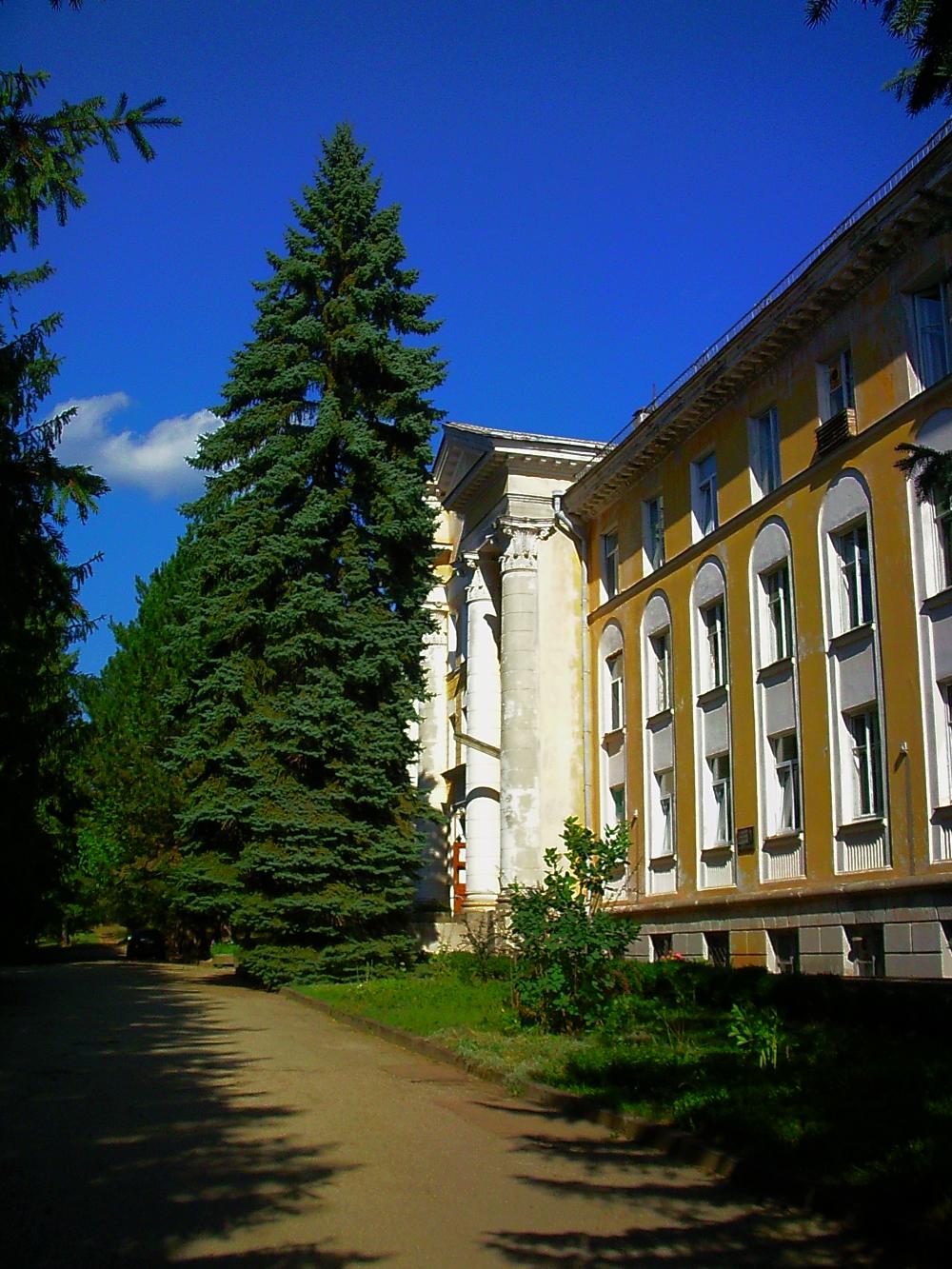 Fig. 6c. Main Building of the Crimean Astrophysical Observatory of the Academy of Sciences of the USSR (CrAO) (Wikipedia CC3, Dmitry Sklyarenko) 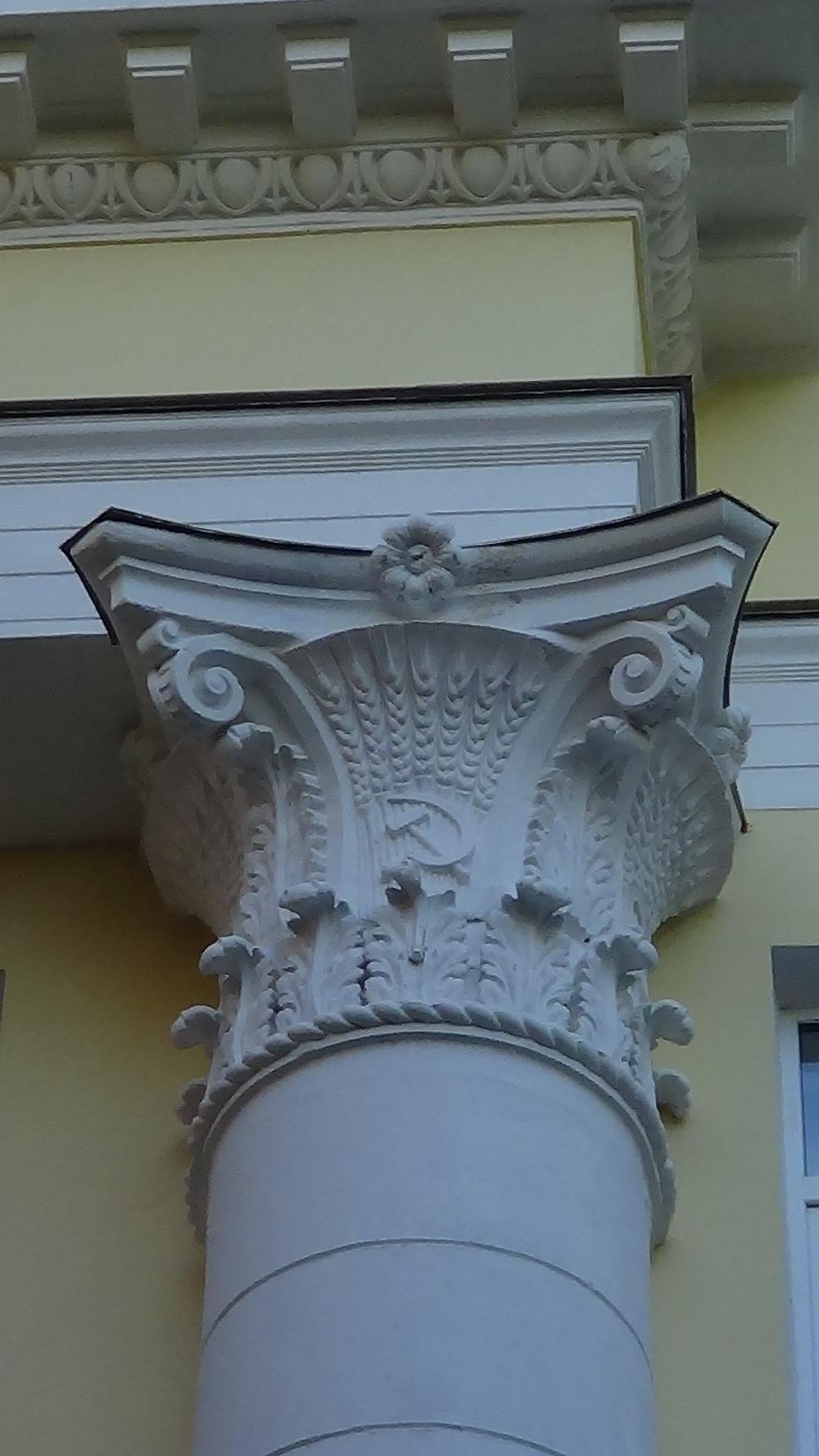 Fig. 6d. Column of the Main Building of the Crimean Astrophysical Observatory of the Academy of Sciences of the USSR (CrAO) (Wikipedia CC3, Dmitry Sklyarenko)

A new modern building for the Crimean Astrophysical Observatory of the Academy of Sciences of the USSR (CrAO) was erected in 1945 on the northern slopes of the Crimean mountains.

Tower of the Winds in Sevastopol (1849), Crimea 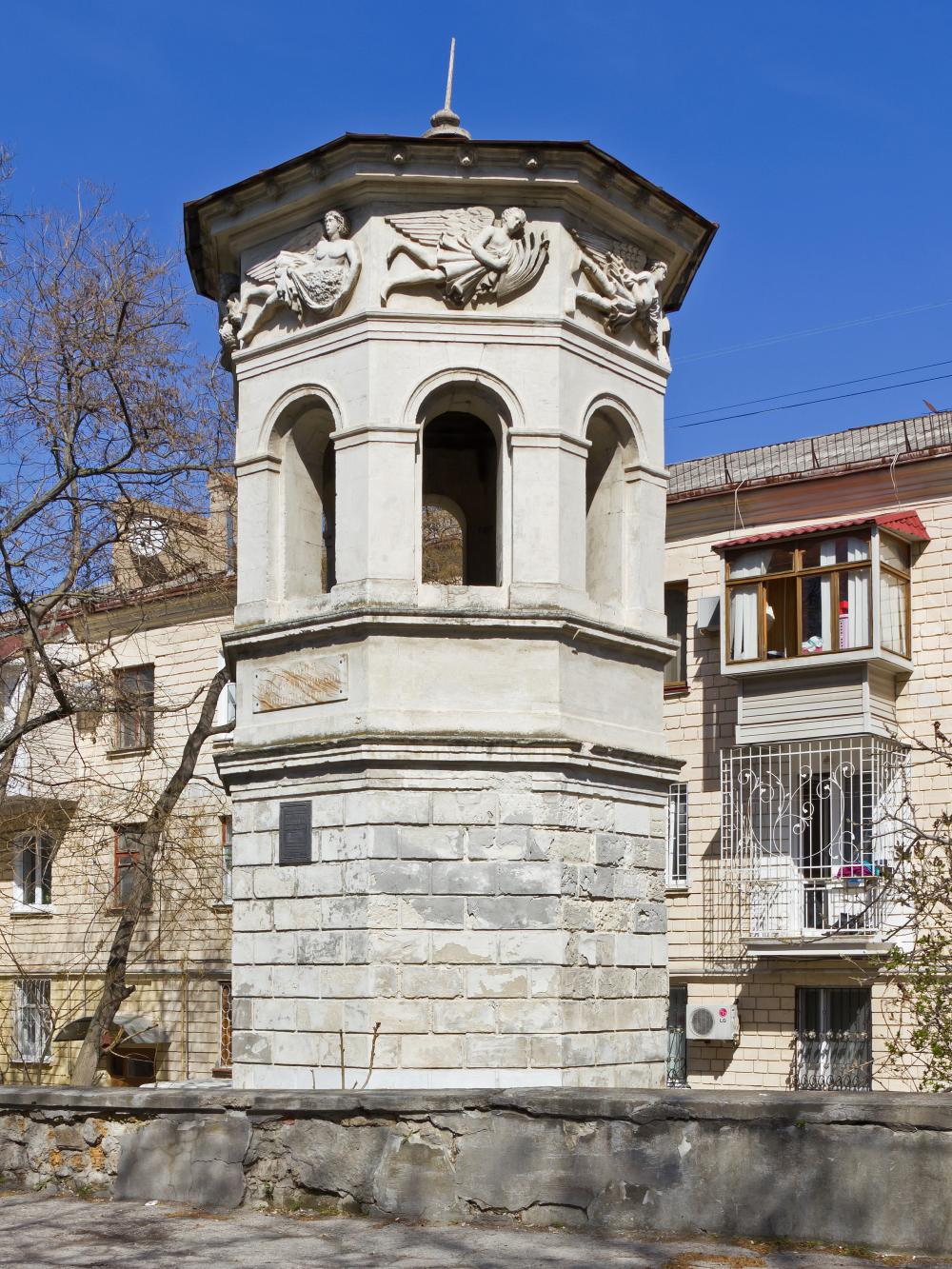 In addition, I would like to mention a very interesting building, the Tower of the Winds (Marine Library Tower) in the Federal City of Sevastopol, Crimean peninsula, inspired by the Tower of the Winds in Athens, Greece (but Sevastopol is three times smaller); it was erected by the engineers Dikorev and John Upton-Venikeev in classicism style in 1849. This octagonal shape was a typical for observatories in Baroque time, 17th and 18th centuries until around, cf. Halle Observatory (1788), Germany, or Radcliffe Observatory (1773) in Oxford, England. The frieze shows the eight gods of the winds for the cardinal directions. On the pyramidal roof was a weather vane.
This architectural monument in the central Leninsky district near the Vladimir Cathedral of Sevastopol was built in order to provide ventilation for the book depositories of the large Maritime Library (this library building burned down in 1855, during the siege of Sevastopol); the Tower of the Winds survived.

The Crimean Astrophysical Observatory (CrAO) is a mountain observatory like Lick Observatory, Mt. Hamilton or Mount Wilson, California, USA - typical since around 1900.

This place is located on the Crimean peninsula, where there is a territorial dispute between Russia and Ukraine, and the city with special status of Sevastopol.

The Simeiz Observatory (1900) is still used, but the more important one is the Crimean Astrophysical Observatory (CrAO) (1945).