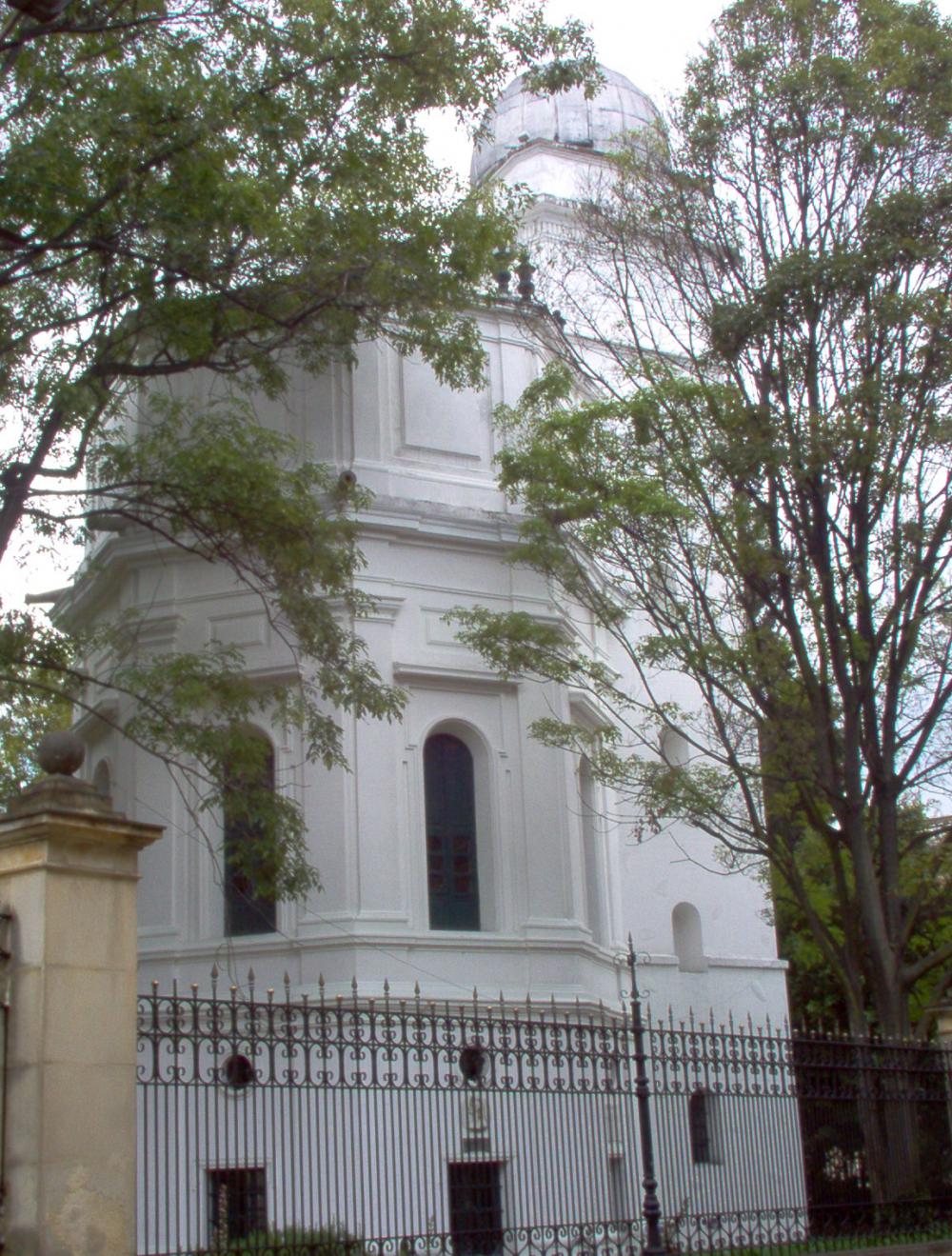 The initiative for building an observatory goes back to José Celestino Bruno Mutis y Bosio (1732--1808), a Spanish priest, botanist, and mathematician, also interested in astronomy. In March 1762, he explained the foundations of the Copernican world system and modern experimental methods in the sciences while giving a lecture at the Colegio de Rosario. In 1774 he had to defend modern science, the Copernican world system and mathematical natural philosophy before the Holy Inquisition.

Thus the foundation stone of the observatory was laid already on May 24, 1802, under the direction of the Capuchin architect Fray Joseph Pascual Domingo de Petrés (1759--1811), who emigrated in 1792 to the Viceroyalty of Nueva Granada (now Colombia) and was the first architect by training in Bogotá. The building, located in the eighth avenue (carrera) with eighth street (calle), was erected in the garden of the Real Expedición Botánico of Mutis (1761). This former headquarters of the National Astronomical Observatory, were adjacent to the Nariño Palace, Bogotá. The work was completed on August 20, 1803. The observatory (height 2686m) in neoclassical style is an octagonal building and a 22-m-high tower building, later a dome was added.
Santa Fé de Bogotá Observatory is the first astronomical observatory that was built on the American continent. It was also Colombia’s tallest building until the Cathedral of Bogotá was constructed in 1823.

José Celestino Mutis recommended his former student Don Francisco José de Caldas (1771--1816), cloth merchant lawyer and self-taught scientist in meteorology, botany, and astronomy, and he was appointed as first director. Caldas started his astronomical and meteorological observations in December 1805; it was also intended for surveying and mapping New Granada (later Colombia). He had only a few astronomical instruments, but no telescope. Caldas allowed the conspirators against the Spanish regime to meet in the observatory, due to this, in 1810, Caldas neglected his scientific work and left the observatory, became military engineer and cartographer -- executed in 1816.

Benedicto Domínguez (1783--1868) was the successor, but in 1814, General Simón Bolívar (1783--1830) took Santa Fé de Bogotá by storm, and his troops looted the Observatory and even took Benedicto Domínguez hostage. There was no activity until 1823, when the Boussingault Mission with five young foreign scientists arrived.
Simón Bolívar, who led what are currently the countries of Venezuela, Bolivia, Colombia, Ecuador, Peru, and Panama to independence from the Spanish Empire, encouraged the development of engineering and science in the nascent republic, and supported the reactivation of the observatory in 1823.
The young chemist Jean-Baptiste Boussingault (1802--1887) made meteorological observations. In 1827 the Observatory was in charge of the writer and doctor Benito Osorio (1792--1848) who made meteorological observations for a year. From 1828 to 1840, it was again in charge of Benedicto Domínguez, who published several astronomical almanacs, then Joaquín Acosta (1800--1852), politician and military man, who made meteorological measurements, and botanist  Francisco Javier Matiz (1774--1851).
In 1848 it became part of the Military College. In 1854 the Observatory was abandoned.

In 1859 it resumed its activity as an observatory, with the military engineer José Cornelio Borda (1829--1866) being appointed director. In 1866 the engineer and astronomer Indalecio Liévano Reyes (1834--1913), mathematician, engineer, and astronomer, was appointed director and professor at the Faculty of Engineering at the National University of Colombia. Liévano made observations of occultation of stars and planets by the Moon, calculated ephemeris and made meteorological observations.

In 1867, the astronomical observatory was suddenly converted into a prison-fortress. General Santos Acosta organized the National University of Colombia, and in 1868, Manuel Ancízar, Rector of the University, appointed José María González Benito (1843--1903) director of the Astronomical Observatory. González Benito gave classes in Meteorology, Astronomy, Paleontology and Geology at the Observatory. He observed shooting stars and in 1882, he started to publish the Annals of the National Astronomical Observatory of Bogotá. In 1891, the engineer Julio Garavito Armero (1865--1920) was appointed Director of the Observatory, who carried out numerous theoretical studies and meteorological and astronomical observations.

After this heyday, there was again total inactivity. The premises ended up being ruined and the few instruments and books were partly lost and partly damaged. In 1921, Simón Sarasola (1871--1947), Jesuit priest and meteorologist from Belen Jesuit Observatory at Havana in Cuba, was appointed as Garavito’s successor; this led to the founding of a National Meteorological Observatory Colegio Nacional de San Bartolomé in Bogotá. In 1923, he established the first seismograph in Colombia, 1941 the Geophysical Institute.

New Astronomical Observatory in National University of Colombia since the 1930s

In 1930 the Observatory was reorganized and the engineer Jorge Álvarez Lleras (1885--1952), one of Garavito’s scholars, was appointed as director (until 1949). In 1936, the Astronomical Observatory was incorporated into the National University of Colombia. The engineer Belisario Ruiz Wilches (1887--1958) was appointed as director, and the new observatory of the University City was built in 1952. As new instrument, an apochromatic refracting telescope was purchased, used before in the Observatory in Marseille, France.
The engineer Jorge Arias de Greiff was director until 1998; between 1974 and 1980 the direction was in charge of the engineer Eduardo Brieva Bustillo. 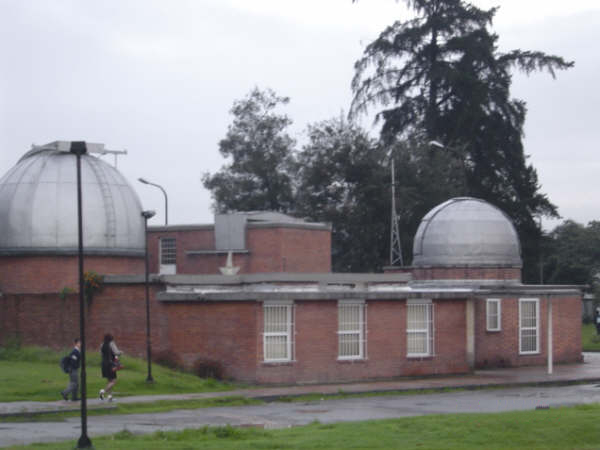 In the observatory, one can find in memory of Alexander von Humboldt’s activity in founding this observatory:

The observatory in Bogotá was declared as a National Monument of Colombia by decree 1584 of August 11, 1975.

It was a tower observatory like many 18th century European observatories.
Very interesting is the octagonal shape of additional the building --
typical for observatories around 1800, reminding of the Tower of the Winds in Athens.

At present it is located within the premises of the Casa de Nariño.
It is no longer used as observatory.
The new observatory building is attached to the Faculty of Sciences of the National University of Colombia in Bogotá.

Currently, the new Observatory is at the Department level attached to the Faculty of Sciences, Bogotá headquarters of the National University of Colombia. Research, teaching and extension work is carried out; Master and Doctorate programs in Astronomy are offered, the only graduate program in Astronomy in Colombia.