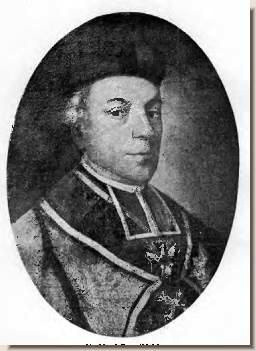 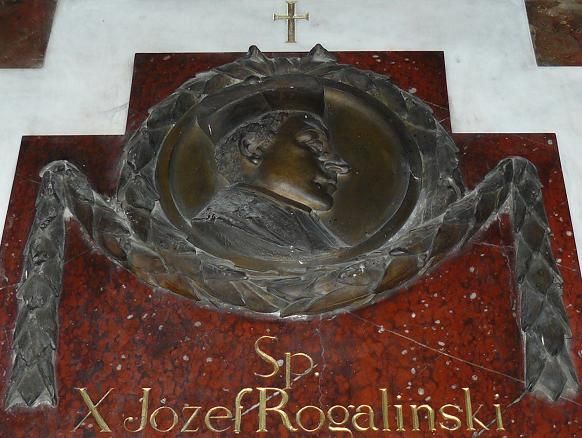 The Jesuit College in Poznań, founded in 1571, got a collection of instruments and astronomical equipment in the 18th century by Maria Leszczynska (1703--1768), daughter of the King of Poland, Queen of France as the wife of King Louis XV, 1725 to 1768.

The observatory was located on the second floor of the college, in the wing adjacent to the church. Above these rooms, on the roof, a tower with a terrace was built, intended for an astronomical observatory. Jozef Rogaliński (1728--1802) visited observatories in Paris (Sainte-Geneviève), Rome, Florence and Lyon, and founded the Jesuit Observatory in Poznań circa 1761, which was almost entirely built and equipped by the Rogaliński family. The observatory in Poznań was much better equipped than the similar institution in Vilnius, which was nine years older: a parallactic telescope, an astrolabe, and a quadrant, made by Canivet of Paris, with a radius of 3 foot, in addition an astronomical clock, made by Jean André LePaute (1720--1789) and a clock, made by François Boucher.

Jozef Rogaliński was not only director of the observatory, but also head of the museum and of the physics laboratory. In addition, he offered free lectures to the public. His observations began circa 1764 (northern lights), and the solar eclipse of 1 April 1764 was observed with a refractor and a Gregorian telescope (cf. Peter Abraham).

Rogaliński’s activities were stopped with the liquidation of the Jesuit order and their observatory in 1773. Warfare during this era made science impossible, the Jesuit College was used as barracks for Prussian and then Russian armies, and the College and Jesuit Observatory were closed in 1773 (Kubiak 1973). The Canivet quadrant was sent from the closed observatory to Kraków in 1783 (Howse 1986). The college functioned as a secondary school. But Rogaliński, who became its vice-chancellor, did not succeed to raise the institution to the rank of a university. 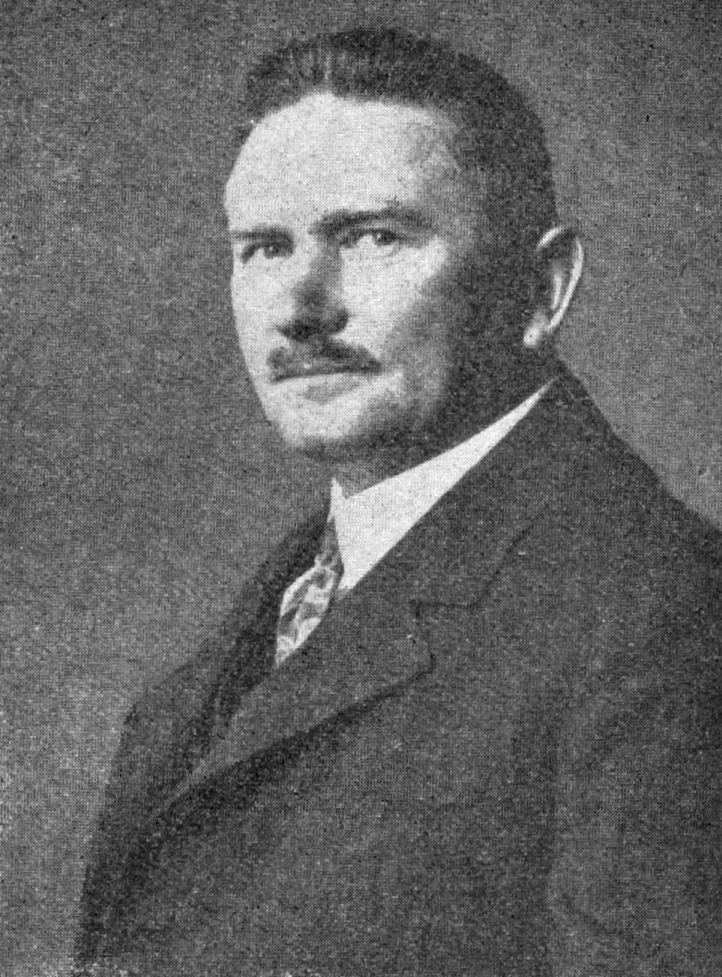 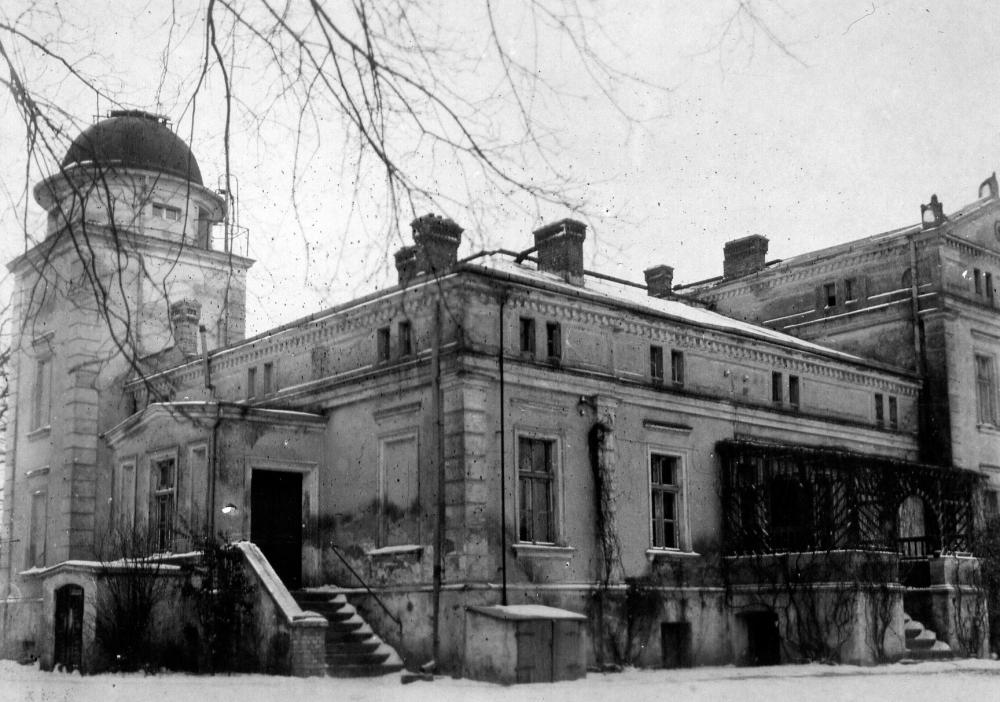 In 1906, the rector of the Prussian Royal Academy in Poznań proposed the foundation of an astronomical observatory in Poznań and asked Kazimierz Romuald Graff (1917--2012), a famous Polish-German astronomer working at the Hamburg-Bergedorf Observatory, 1916 to 1928, to help. Graff cooperated in purchasing the first instrumentation.

In 1919, the Poznań Observatory was founded. Kazimierz Graff took over the leadership. He chose the manor house "Villa Górczyn", ul. Palacza 63, built around 1880. Adjacent to one corner is a tower adapted for observation purposes (a dome with astronomical equipment).
The other observing location, proposed by Graff, 30 km outside the city, on the moraine hills of Mosina, was not realized.
In 1920, after the outbreak of the Polish-Soviet war, the financial situation of the Adam-Mickiewicz-University deteriorated significantly; Kazimierz Graff refused the director position. 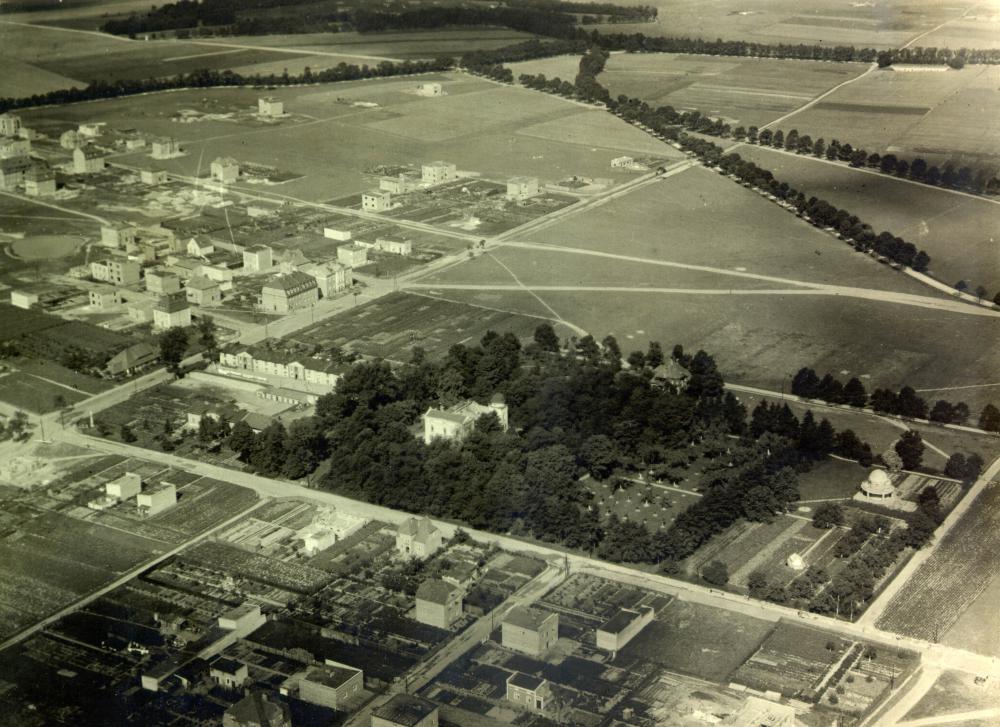 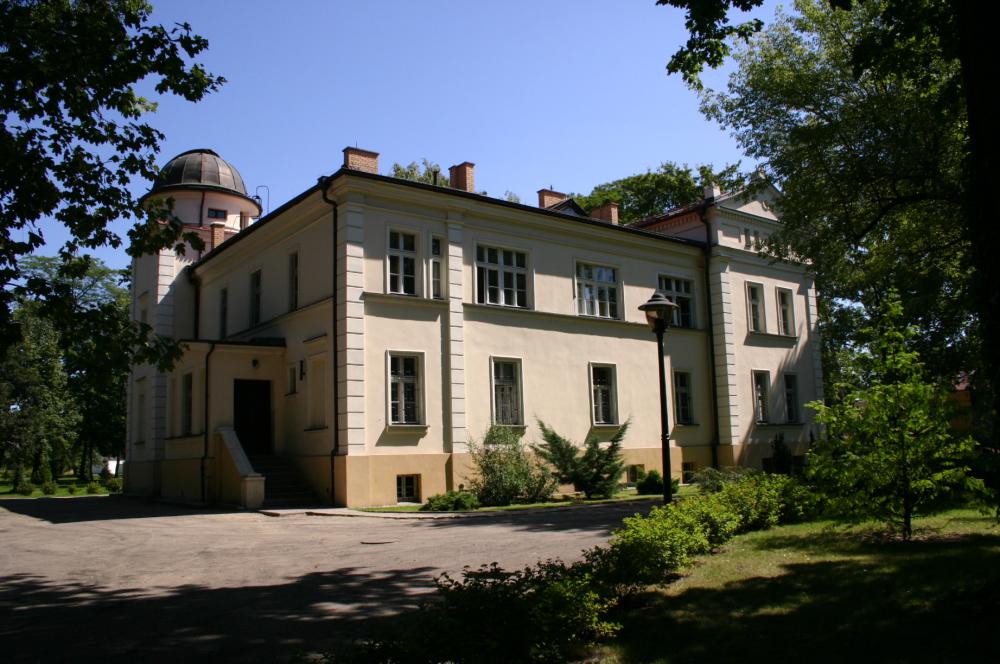 Thanks to the recommendation of Prof. Tadeusz Banachiewicz (1882--1954), Bohdan Zaleski (1887--1927) of Mykolaiv (Nikolaev) Observatory (now in Ukraine) took over in 1922 (until 1927). In 1923, he got his PhD from Jagellonian University Kraków, and the Habilitation in 1926. The research was focused primarily on astrometry, catalogue of declinations of 486 fundamental stars.
After Zaleski’s early death, his first astronomy graduate and assistant Stanisław Andruszewski took over the leadership until 1929; he introduced time signals to the Polish Radio station in Poznań. 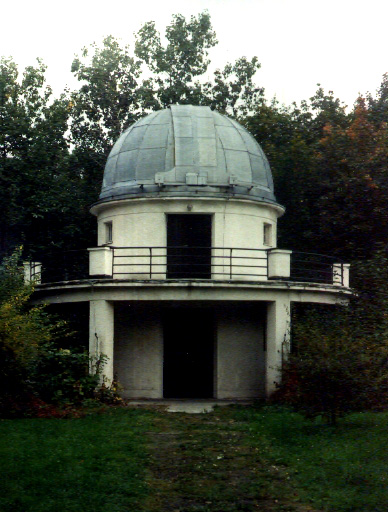 Fig. 4a. Dome of Poznań Observatory for the Zeiss Refractor (www.vesta.astro.amu.edu.pl) 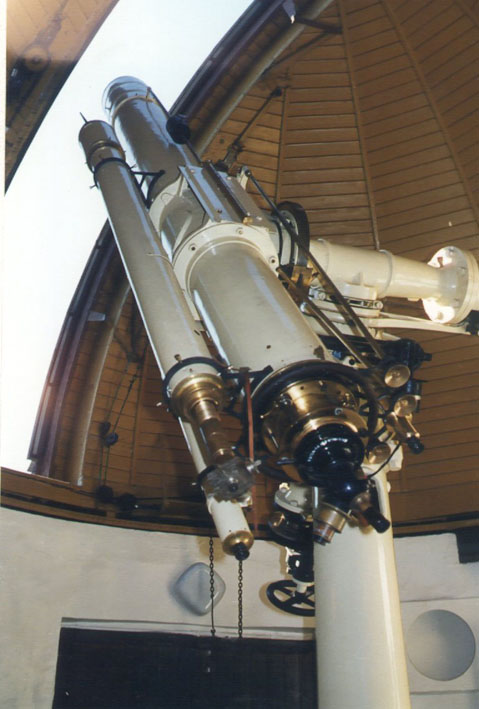 In 1929, Dr habil Józef Witkowski (1892--1976) from Kraków was called as director, and the observatory developed dynamically; the main building got a new floor. The research topic was extended to comets, eclipsing binaries, and occultations. From 1929 to 1933, the observatory took part in an international longitude programme. The Zeiss 200/3000 refractor (mounted in a new dome) and a Riefler pendulum clock and a Shortt clock were bought. From 1932, the topic of scientific research was expanded to celestial mechanics, micrometric observations of comets and asteroids, including issues related to the origin of comets. In 1934, the total solar eclipse in Irkutsk, Siberia, was observed by using an innovative chromo-cinematographic technique. In addition, astrophysics started with eclipsing binaries, and the Nova Herculis (1934) was observed with visual photometry. The resulte were published in the journal "Publications de l’Observatoire Astronomique de l’Université de Poznań".

During the Second World War, the observatory continued its scientific activities; almost all Polish staff was replaced with Germans (Duerbeck 2006). The head of the facility was Dr. Joachim Otto Stobbe (1900--1943), one of the pioneers of asteroid photometry, and from mid-1942 Harald Fischer. As assistants Werner Lohmann and Stefan Temesváry (1915--1984) were chosen, but immediatedly sent for service in the German army. Positions of comets and minor planets were calculated, but especially calculations for the Berlin ephemeris and the navy had to be carried out. 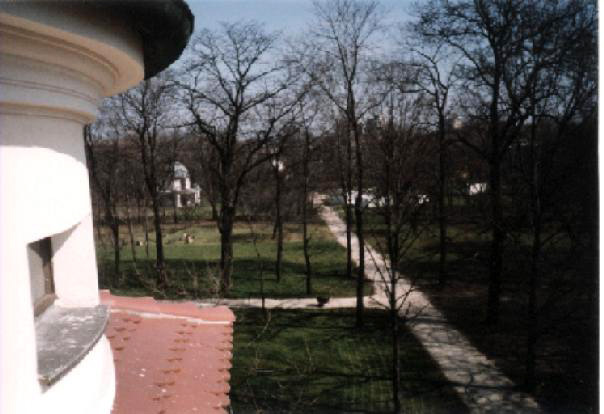 Fig. 5a. Dome on the Main Building of Poznań Observatory (www.vesta.astro.amu.edu.pl) 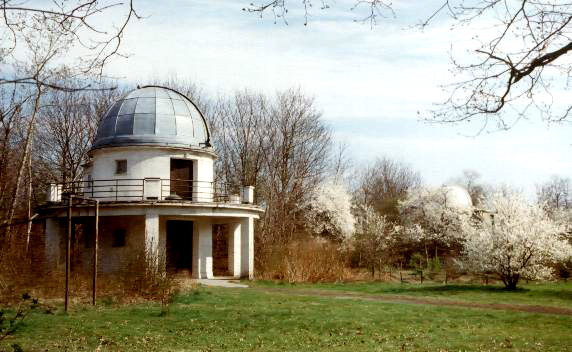 Fig. 5b. Larger Dome of Poznań Observatory for the Zeiss Refractor (www.vesta.astro.amu.edu.pl)

After WWII, in 1945, Prof. Józef Witkowski (1892--1976) was director of the observatory until 1962. With new cameras and a Zeiss photographic plate measuring machine, photographic astrometry of asteroids and comets were made. The Minor Planet 1949 SC was discovered in this observatory. In 1957/59, the observatory participated in the International Geophysical Year (1957), concerning the international longitude and latitude programme.
From 1962 to 1967 Prof. Dr. Fryderyk Koebcke (1909--1969), a student of Prof. Witkowski, was mainly interested in astrometric observations (time service), celestial mechanics and satellite geodesy. He succeeded to organize, that the observatory got a satellite tracking station (14-cm-camera, f=1m).

From 1967 to 1990, the institution was headed by Prof. Dr habil Hieronim Hurnik (1919--2016), who used the Astronomical Latitude Station (ALS) of the Polish Academy of Sciences in Borówiec for the observation of artificial satellites. 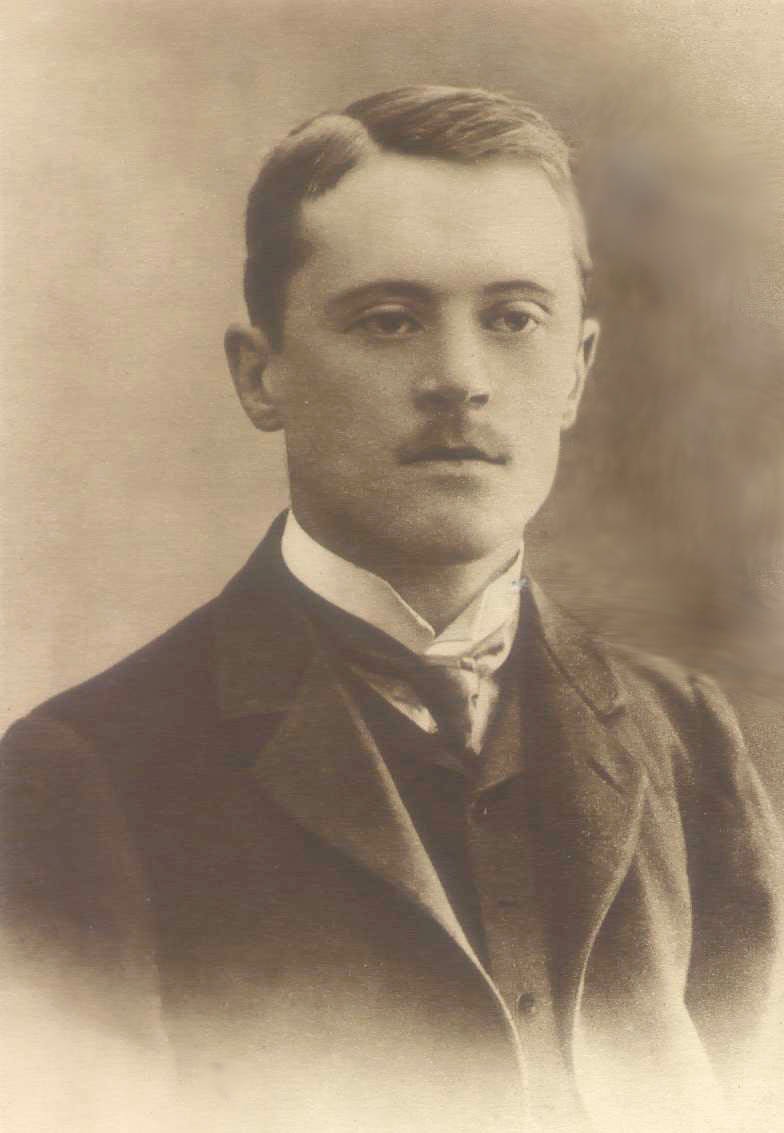 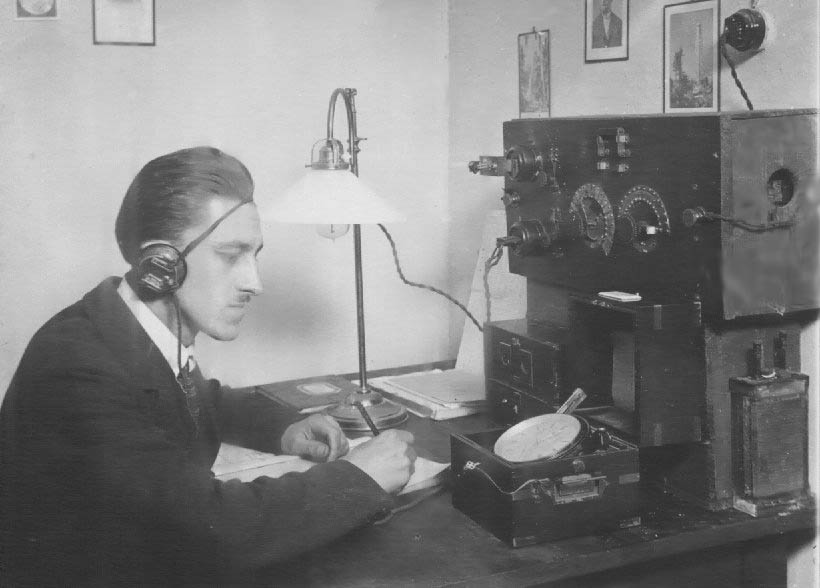 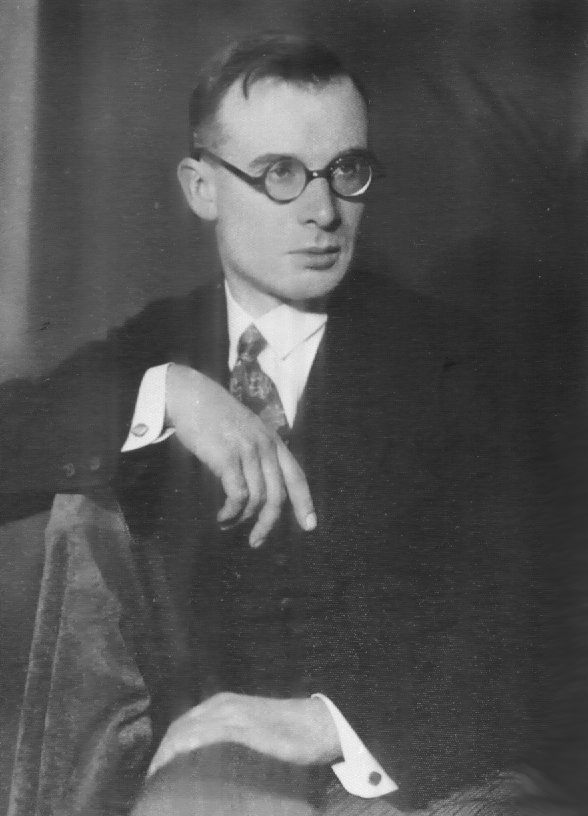 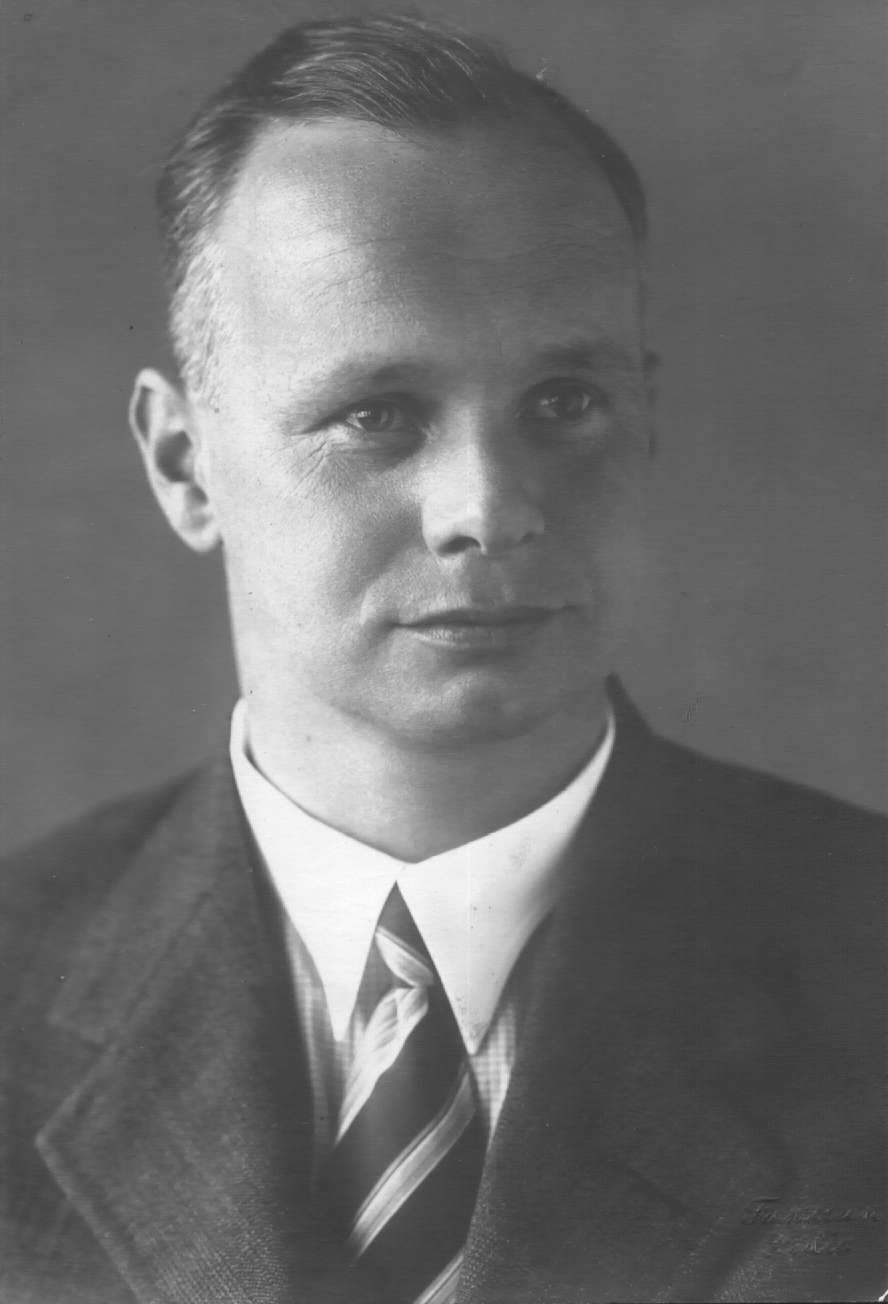 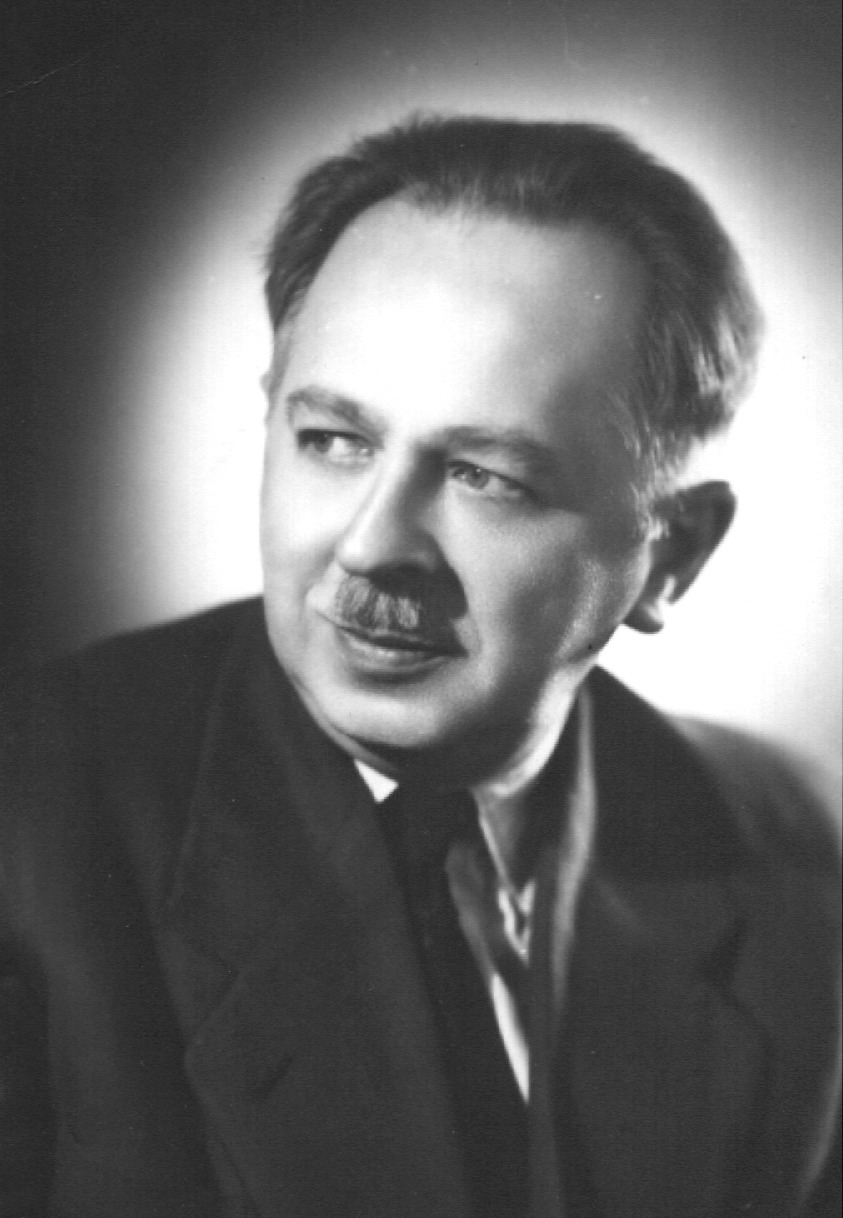 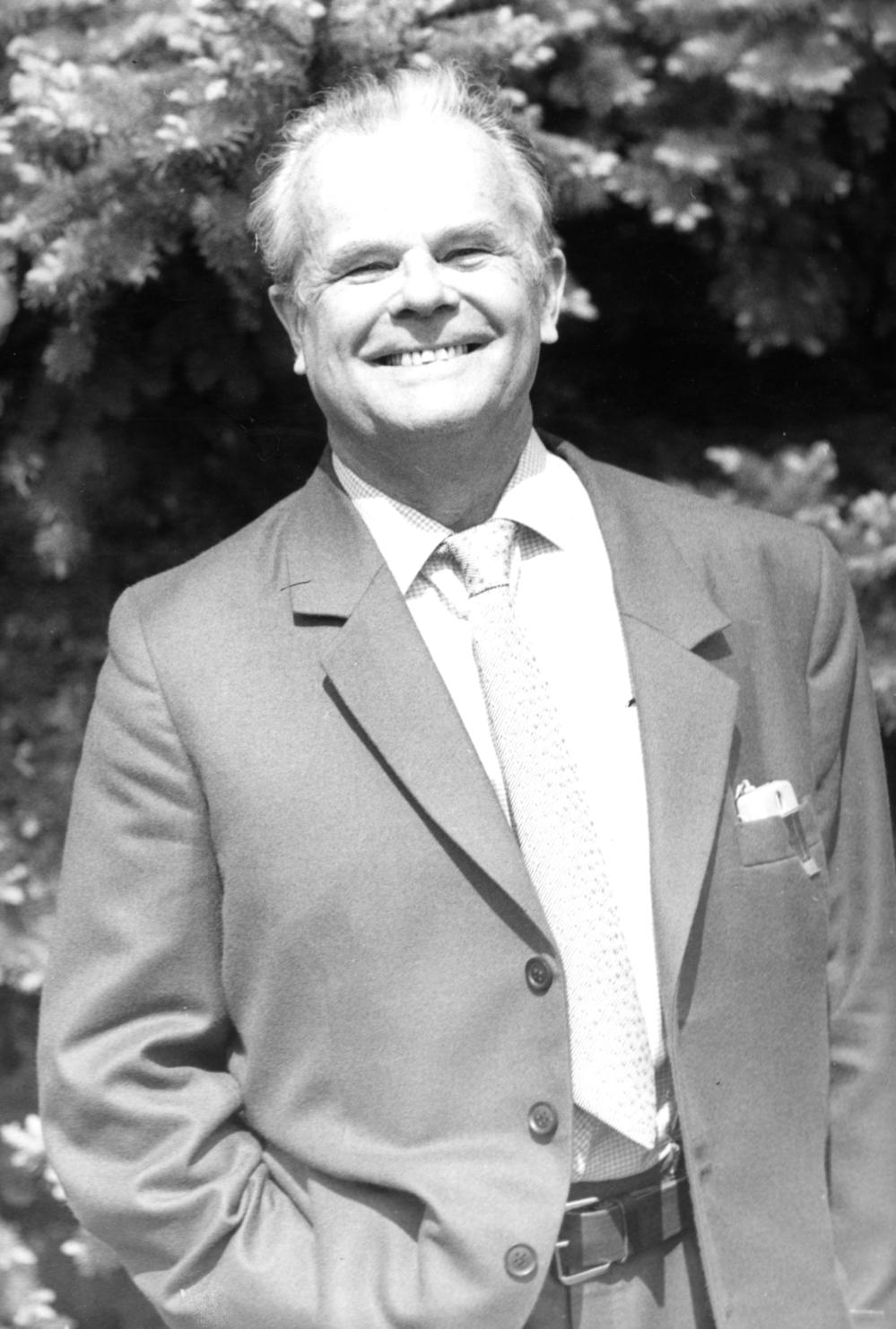 Directors of the Jesuit and University Observatory Poznań 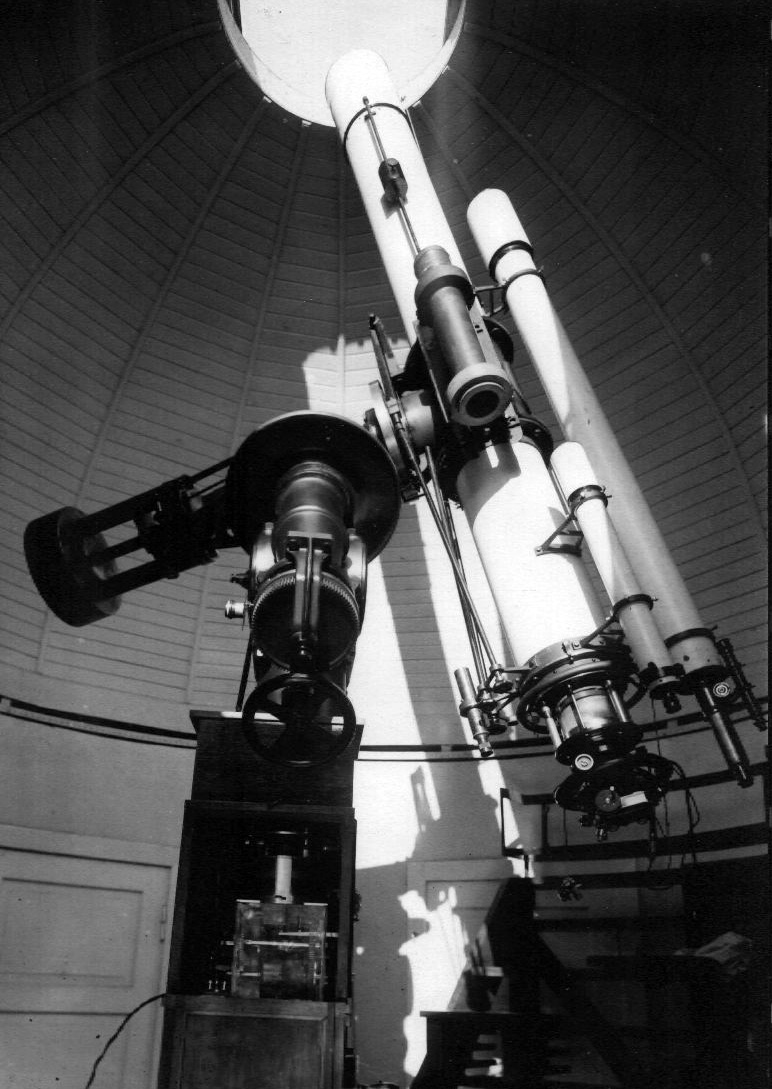 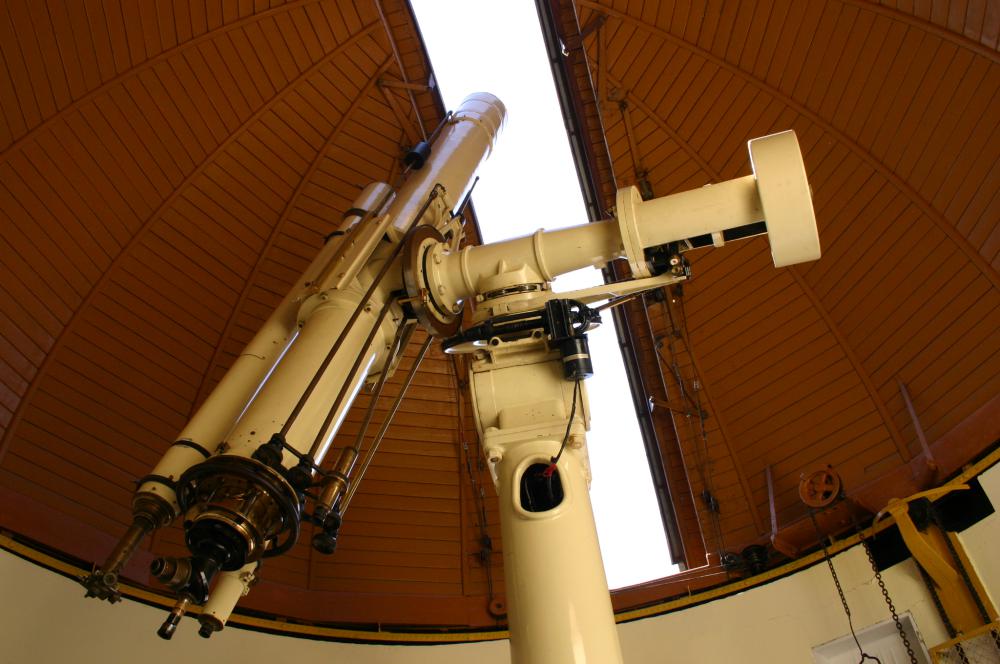 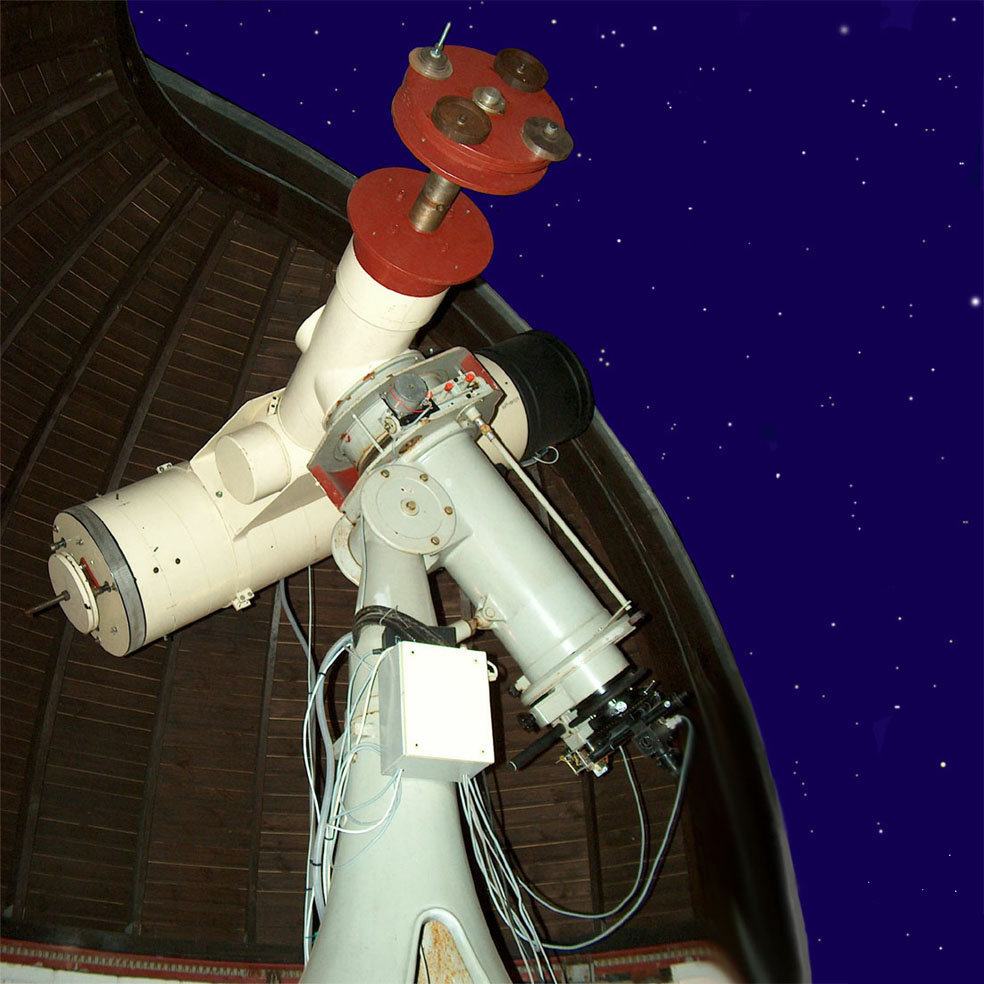 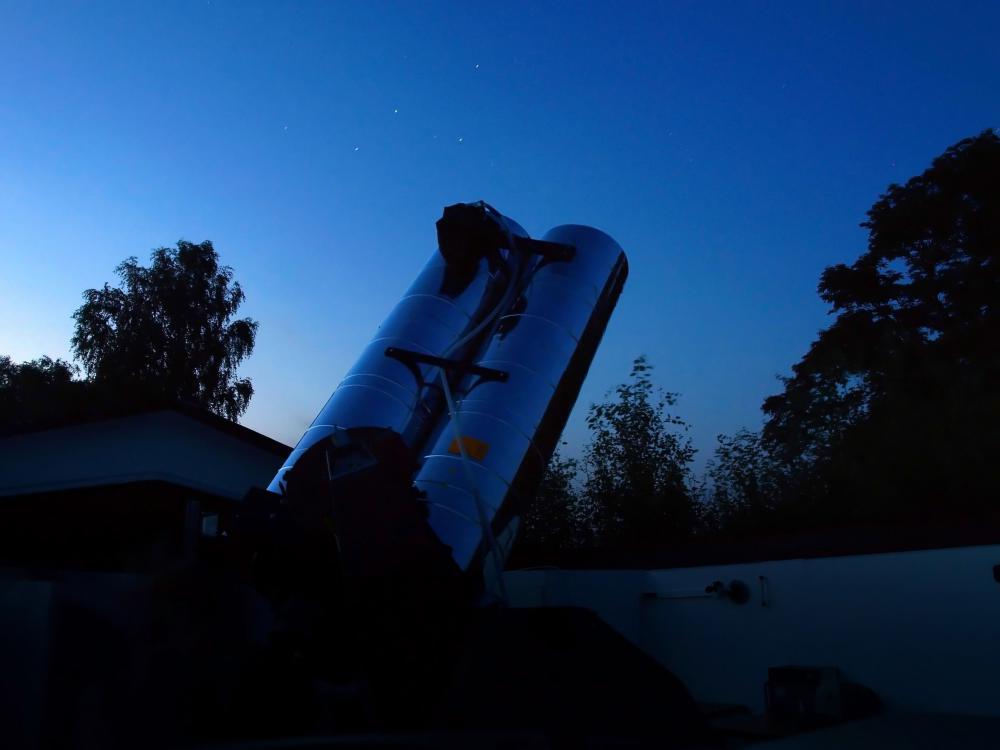 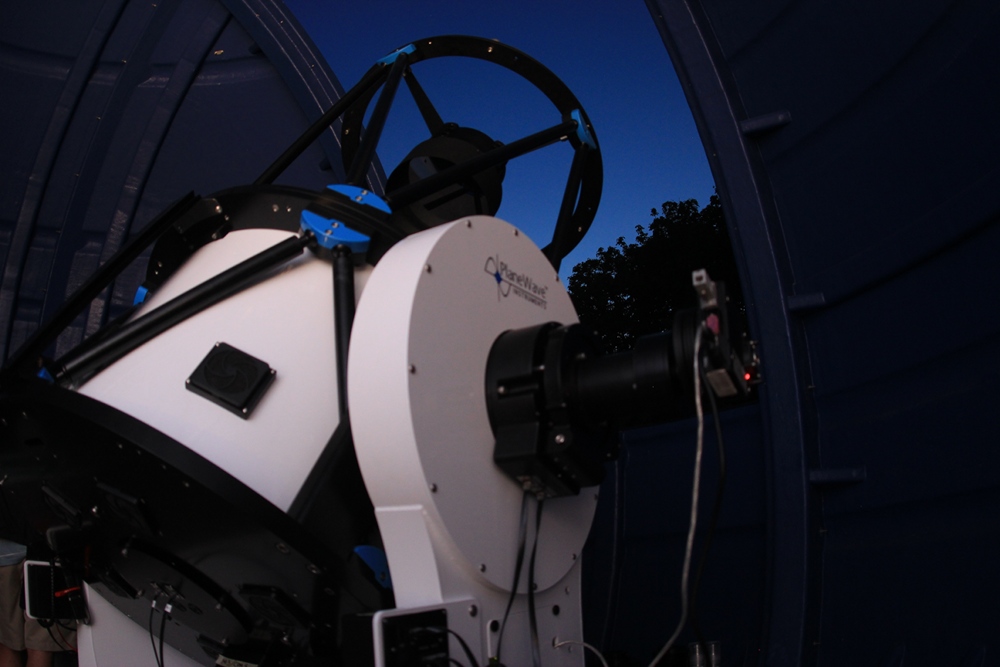 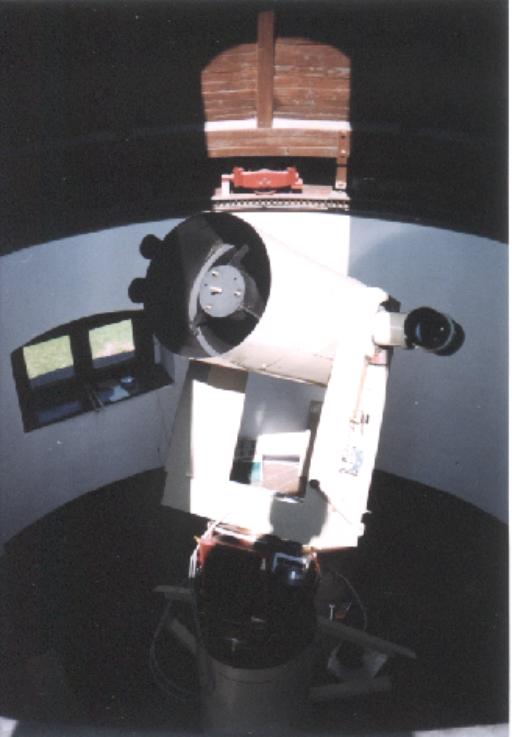 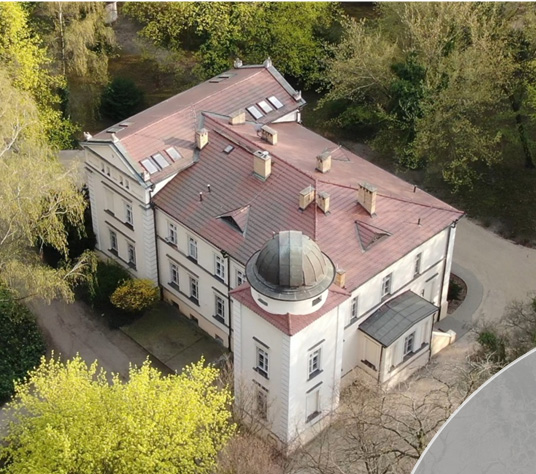 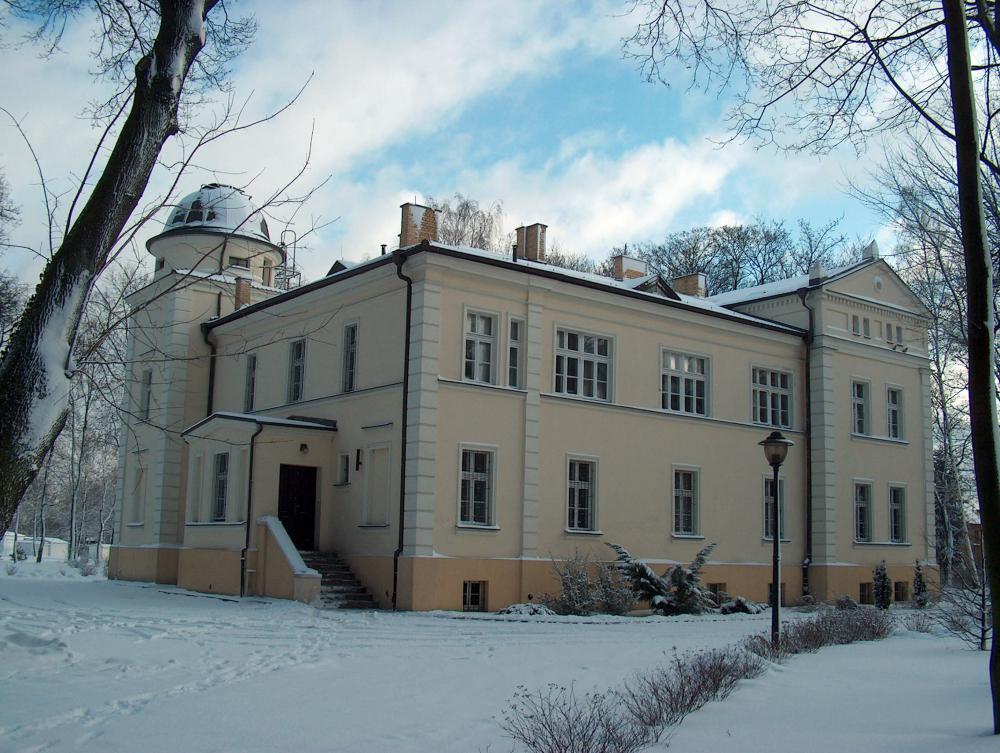 The original building of Poznań Observatory is preserved in good condition.

Poznań Observatory is an example of a castle, which was changed to an observatory, cf. Szombathely-Hereny, Hungary, and Meudon near Paris, France.

Besides the research in astrophysics, the observatory also conducts popularization activities for schools and monthly open lectures for the public, as well as events like Day of the Open House, Star Gazing Nights, etc.

Research on asteroids has a long tradition in Poznań Observatory. One of the first major achievements was the discovery of the asteroid (1572) Posnania (September 22, 1949). In recognition of the three Poznań astronomers currently working at the Observatory, three previously nameless asteroids were given the names: Michalowski, Kwiatkowski, Kryszczynska.

The research topics of the Observatory include: