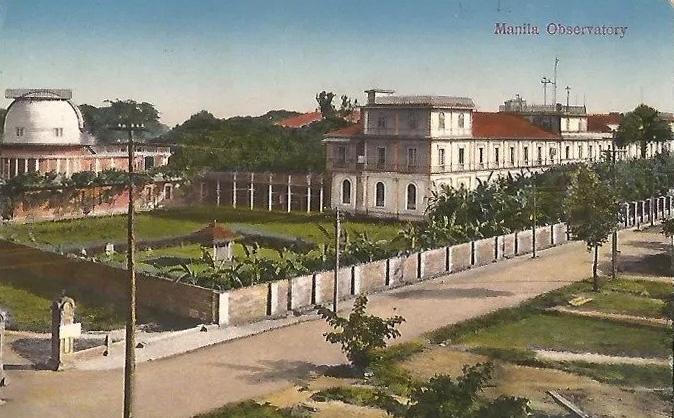 Astronomy, timekeeping, solar observations, meteorology, terrestrial magnetism, and seismology played an important role in imperial expansion during the age of empire. After the suppression of the Society of Jesus (1773 to 1814) and the regeneration / restoration, Jesuit observatories were revived or newly erected in the 19th century, e.g. outposts of scientific excellence were established in the tropics, besides Manila (Philippines, est. 1865), <a href="https://www3.astronomicalheritage.net/index.php/show-entity?identity=188&idsubentity=1" target="_blank">Belén Observatoy at Havana</a> (Cuba, est. 1857), <a href="https://www3.astronomicalheritage.net/index.php/show-entity?identity=207&idsubentity=1" target="_blank">Zikawei Observatory in Shanghai</a> (China, est. 1872), and Tananarive (now Antananarivo, Madagascar, est. 1889).

Francisco Colina (1837--1893), a teacher of mathematics, began meteorological observations in the secondary school founded by the Spanish Jesuits in Manila, Philippines, in 1860. The main tasks of Manila Observatory are weather forecasting and earthquake research and today research in seismology and geomagnetism as well as radio and solar physics.

The next director Francisco Faura (1840--1897) from Spain, director from 1878 to 1897, started to acquire instruments, like the famous Secchi meteorograph (1869). Inspired by the earthquake of 1870 in Manila, Ricart constructed two pendulums, horizontal and vertical, which were helpful during the strong earthquake of 1872.
Faura observed with two young Jesuits, Juan Ricart (1838--1915) and Jaime Nonell (1844--1922) the solar eclipse of 1868 on Mantawalok, a small island of the Celebes archipelago; they met Utrecht astronomers. The results were sent to Madrid and to Secchi in Rome and were published in the Bulletin of the Observatory of the Collegio Romano. Then he travelled through Europe, to Spain in 1871 and to the Collegio Romano in 1877, to Stonyhurst, and he visited also observatories in Italy and met  Italian seismologists. In 1879, Faura studied typhoons (called baguios in the Philippines). He successfully forecasted the serious typhoon of 1879 in Manila -- the first official storm warning in the Far East.
In 1887, the Meteorological Service was supplemented by official timekeeping, using a Time Ball at noon, followed by a cannon shot in the harbour of Manila. In addition, the observatory developed a system of visual signs in order to inform mariners of severe storm weather. 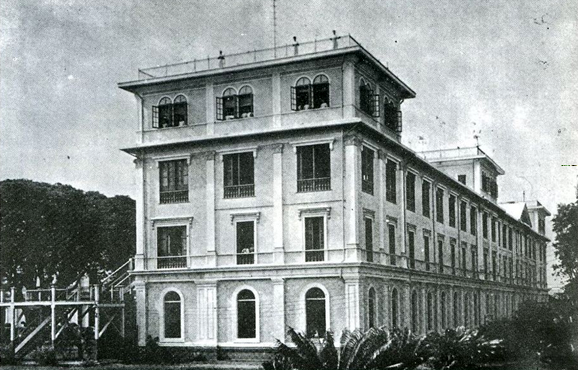 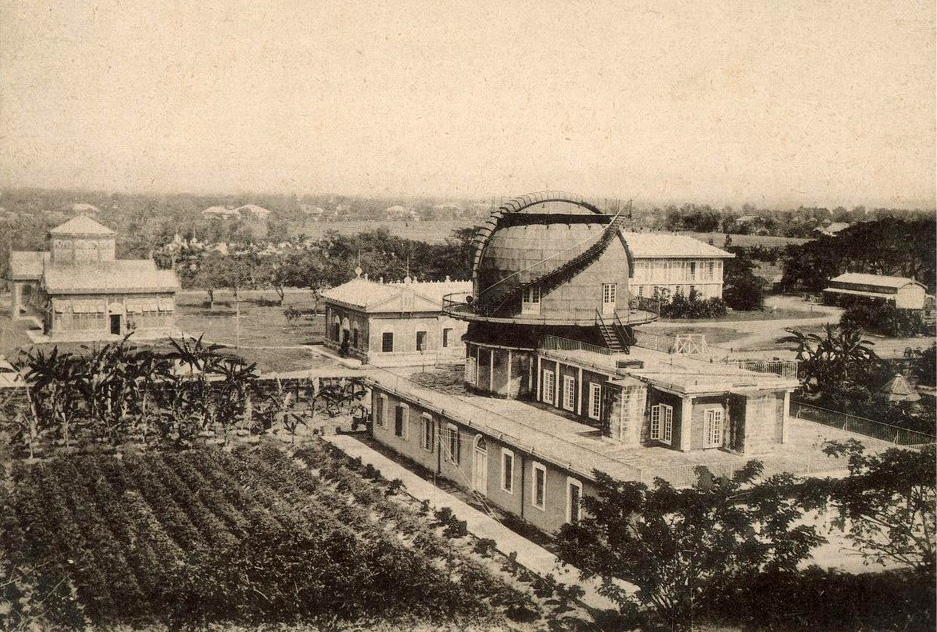 A new observatory building was erected (1886) near to a new Jesuit school in the south of Manila. Now Faura had enough space for offices, library and a tower for meteorological instruments. 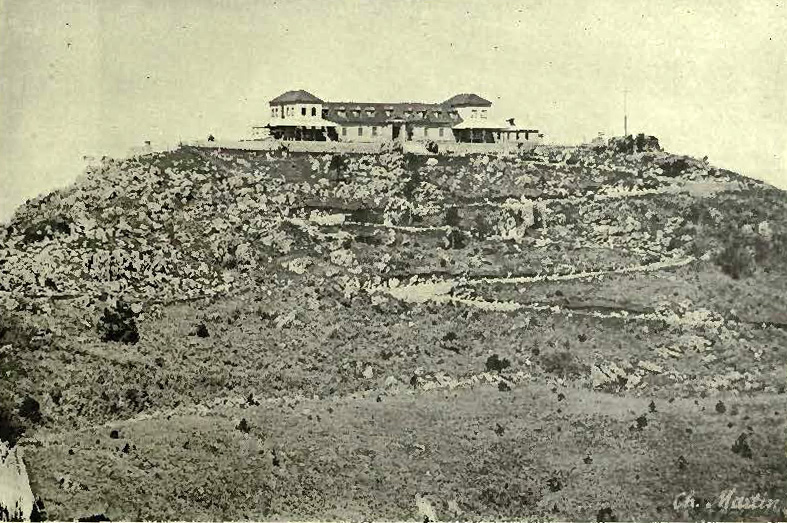 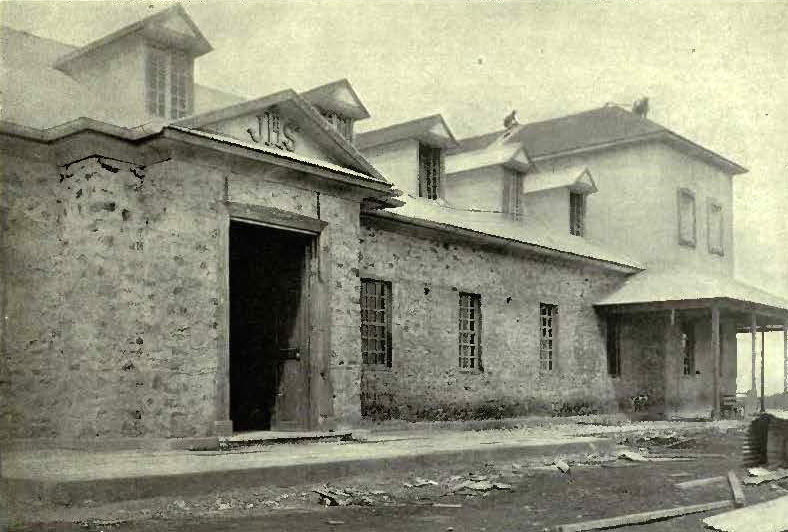 In addition, the Mirador Observatory with four towers was erected on Mirador (Mount Lookout, 132m), Baguio, Benguet, as a new meteorological-geodynamic station of the Weather Bureau (1909) (Algué 1909).

Timeline of development: In 1879 warnings of typhoons and in 1880 earthquake observations. In 1884, Manila Observatory as an official institution for weather forecasting in the Philippines recognized -- 1901 Philippine Meteorological Office.
Time service started in 1885, seismology in 1887 and astronomy in 1899.

The Manila Observatory was destroyed in 1945. After WWII, in 1962, a new Manila Observatory building was erected on Loyola heights near the campus of Ateneo de Manila University in Quezon City (Diliman in 1962). The emphasis of research was seismology and sun-earth-relationsships (solar studies, ionospheric research, radio physics, geomagnetic studies). Partners of Manila Observatory for research in environmental issues are PAGASA (Philippine Atmospheric Geophysical and Astronomical Services Administration), and PHIVOLCS (Philippine Institute of Volcanology and Seismology).

The old Mirador Observatory in Baguio, Benguet, was used as observing station for seismic and magnetic research, and a magnetic station in Davao -- close to the magnetic equator of the earth. 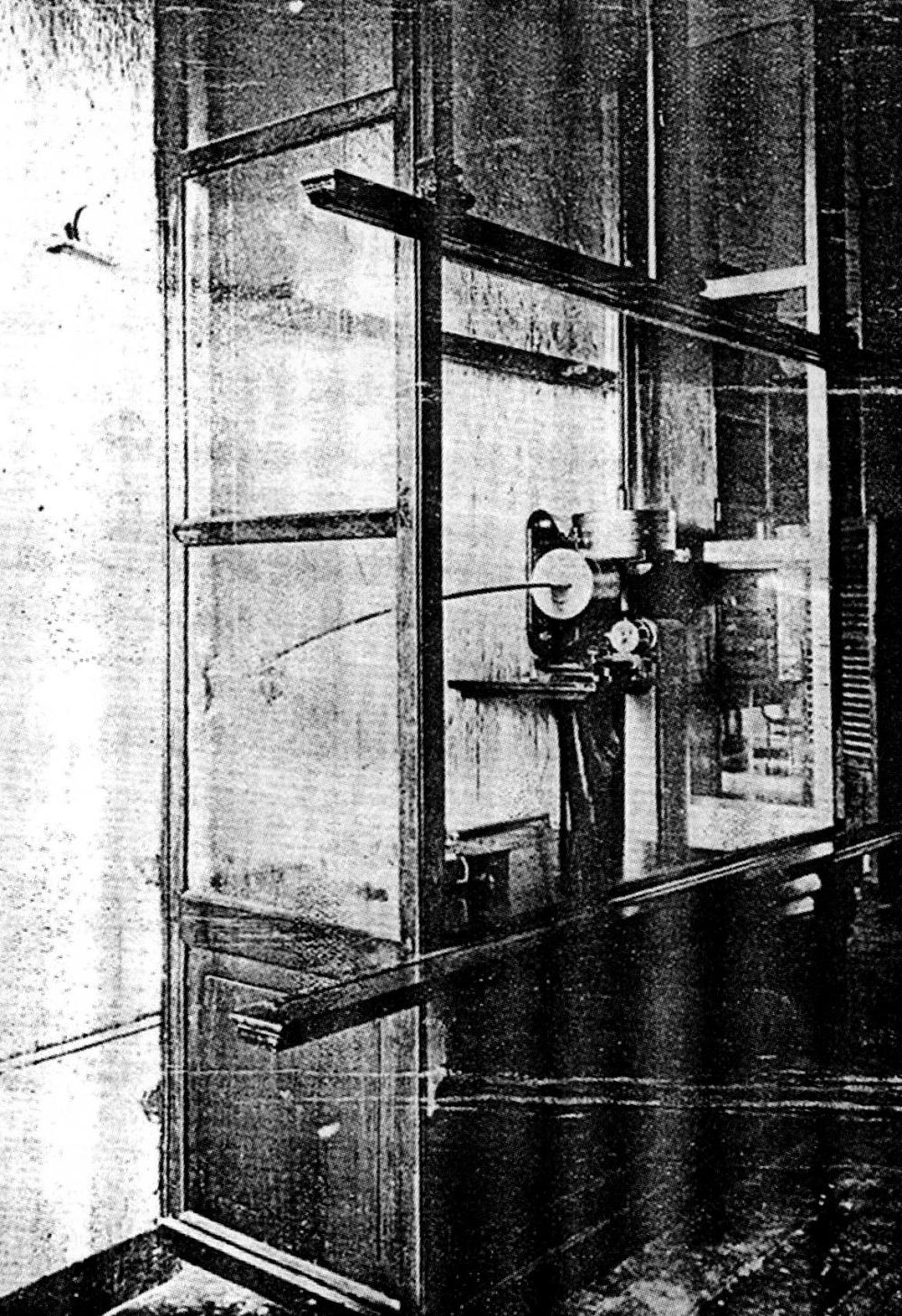 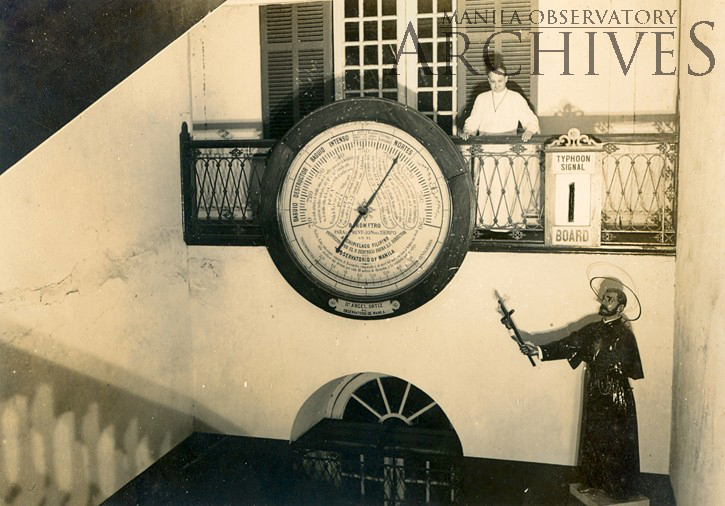 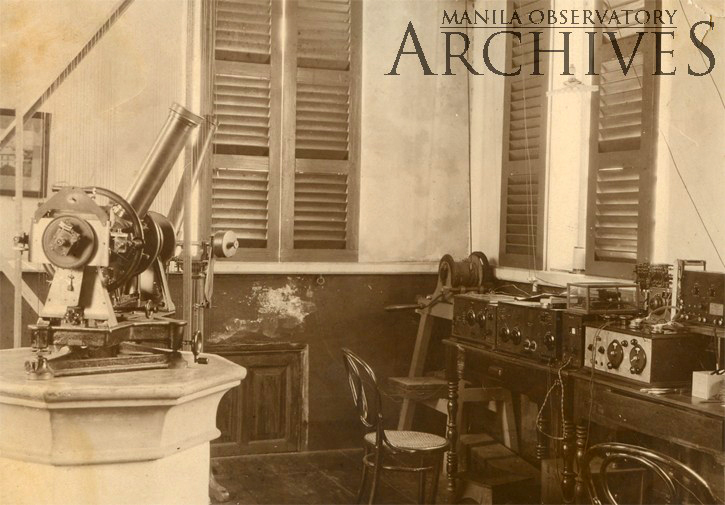 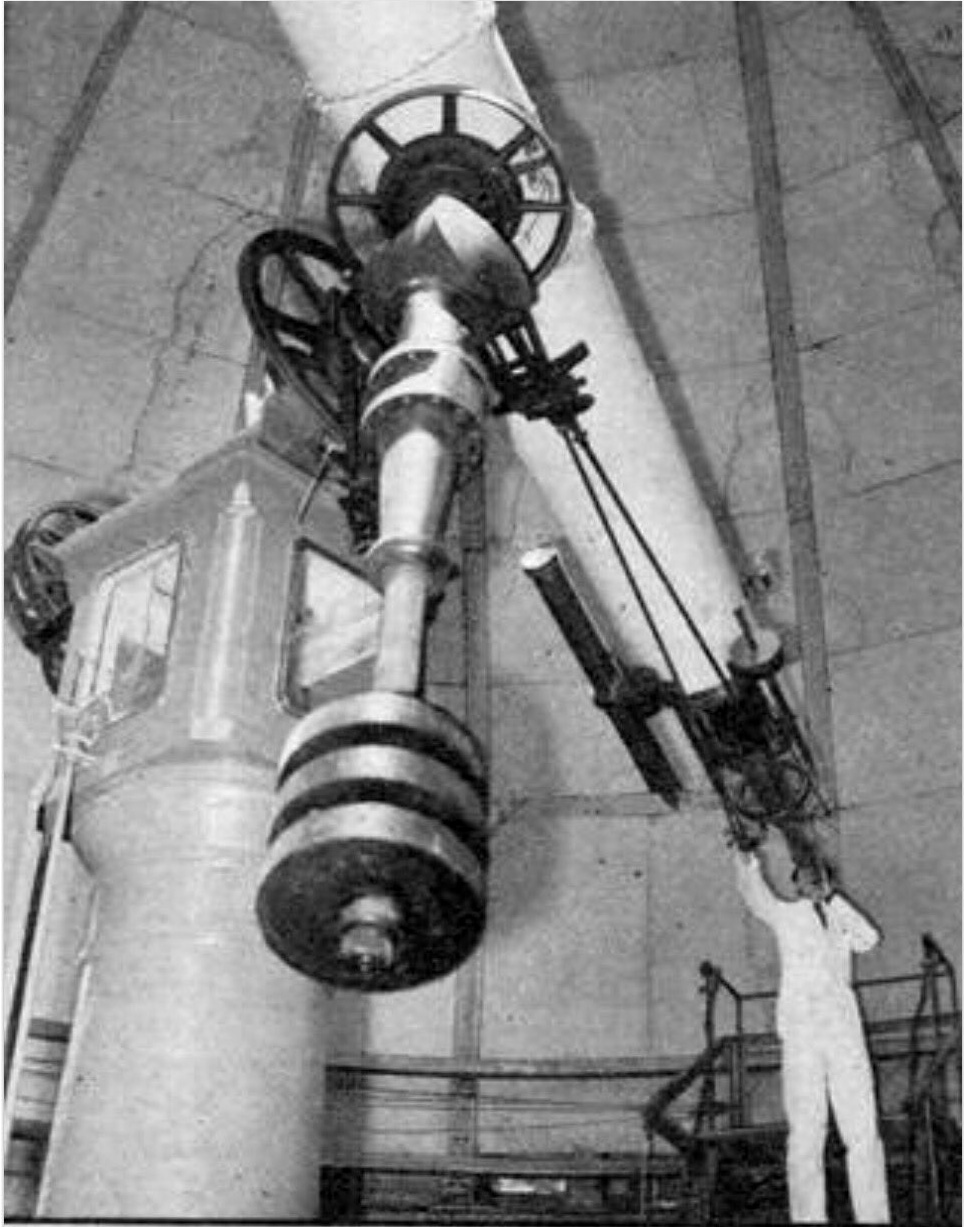 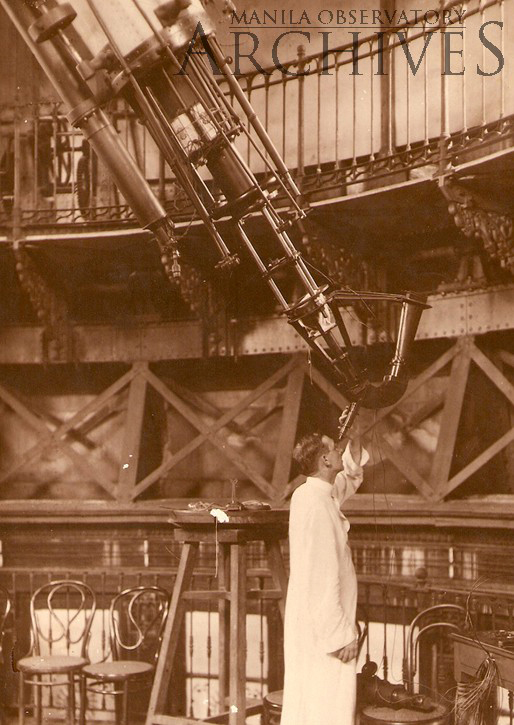 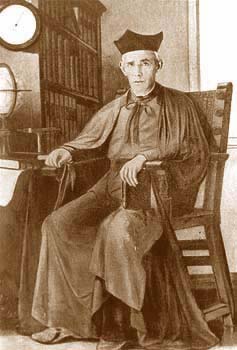 The original building of the Jesuit Observatory was destroyed in 1945.
Then, in 1962, a new building was erected for Manila Observatory

The Manila Observatory is mainly used for meteorology, seismology and sun-earth-relationsships. 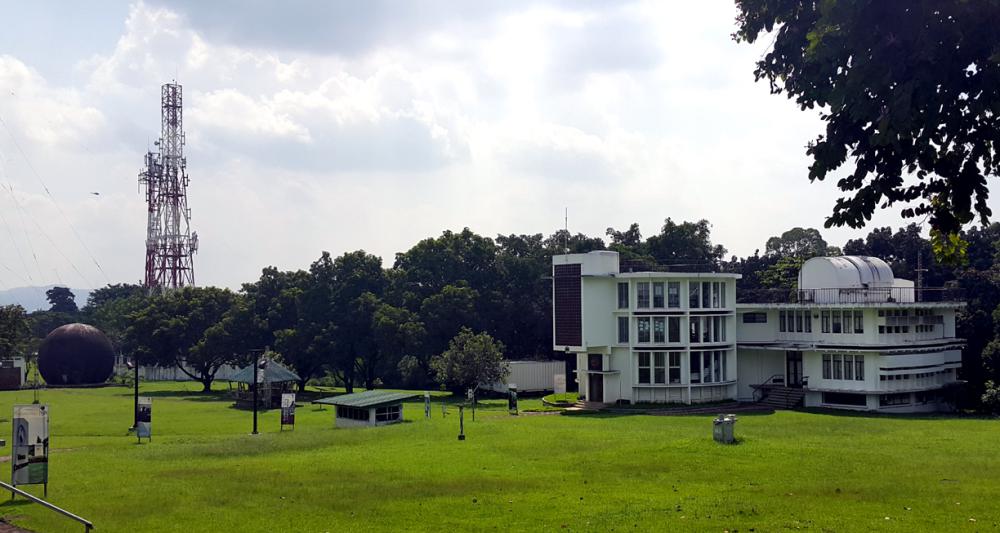 In 1962, a new Manila Observatory building was erected on Loyola heights near the campus of Ateneo de Manila University in Quezon City. The emphasis of research was seismology and sun-earth-relationsships (solar studies, ionospheric research, radio physics, geomagnetic studies). 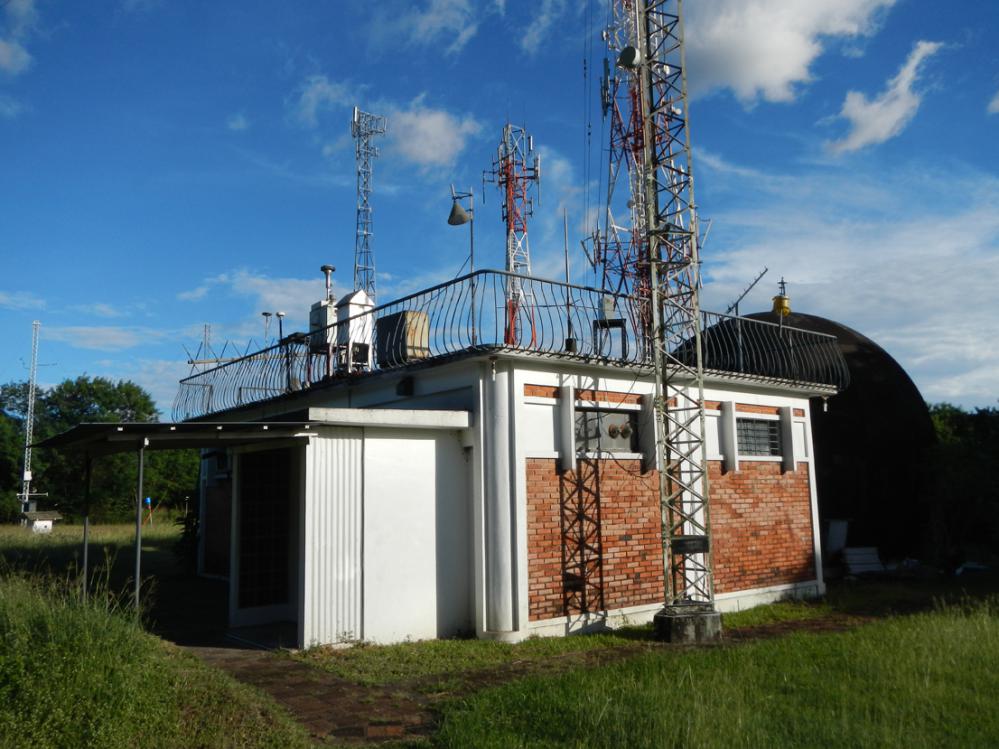 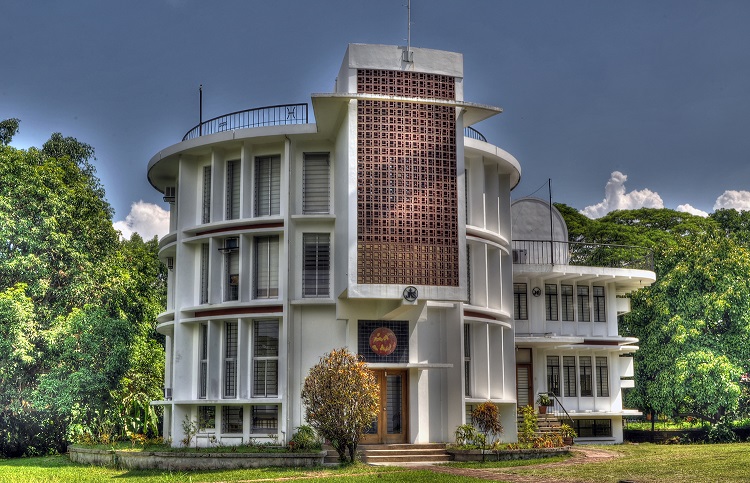