Dunsink Observatory, an Institute of the Trinity College in Dublin, 8 km northwest of central Dublin, was built in 1783/85, sponsored by Provost Andrews with £3,000, It was the first building in Ireland specifically constructed for scientific research -- is the oldest scientific institution of Ireland.
Here is the entry for the observatory Dunsink in Thom’s Irish Almanac and Official Directory for the year 1850:

ASTRONOMICAL OBSERVATORY OF THE UNIVERSITY OF DUBLIN, DUNSINK
Astronomer Royal, Sir William Rowan Hamilton, A.M., LL.D.
Assistant Astronomer, Charles Thomson, esq.
This Observatory, endowed by Francis Andrews, esq., LL.D., Provost of Trinity College, and erected in 1785,
was placed, by statute, in 1791, under the management of the "Royal Astronomer of Ireland",
an appointment first filled by Dr. Henry Ussher, and subsequently by Dr. Brinkley, Bishop of Cloyne.
The Institution is amply furnished with astronomical instruments, and is open to all persons interested in astronomical science,
on introduction to the resident Assistant. It is situated in Lat. 53°23’13’’ N, Long. 6°20’15’’ W.

Fig. 2. Dunsink Observatory, planned, but the two wings were not realized by the architect Graham Myers (1785) (© DIAS)

The architect Graham Myers (1746--1801), an assistant of Richard Cassels (1690--1751), designed an aesthetic building -- without ornaments in a functional style. The plan, to add two Palladian-style wings on either side of the main building with smaller domes, was finally rejected. 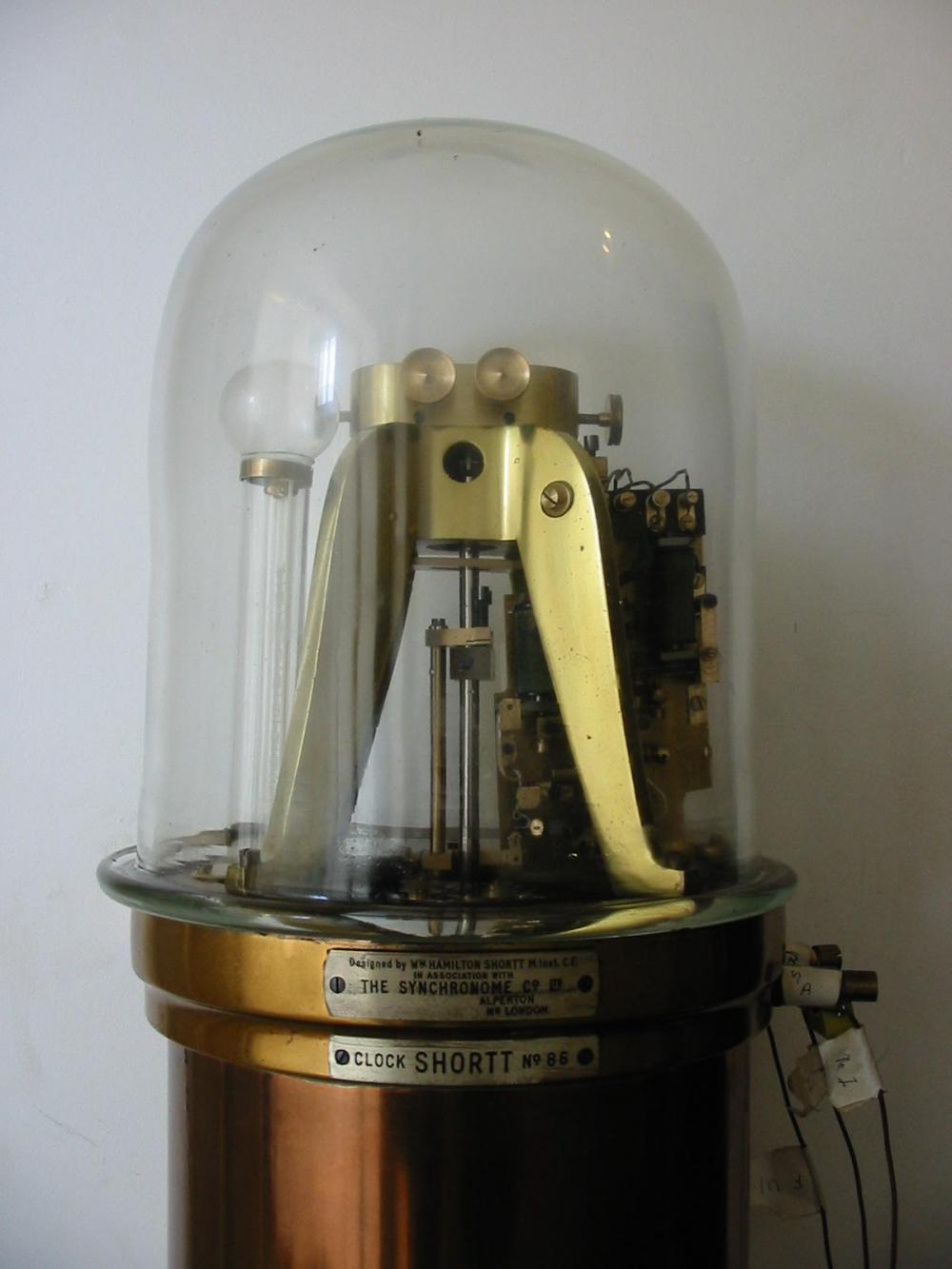 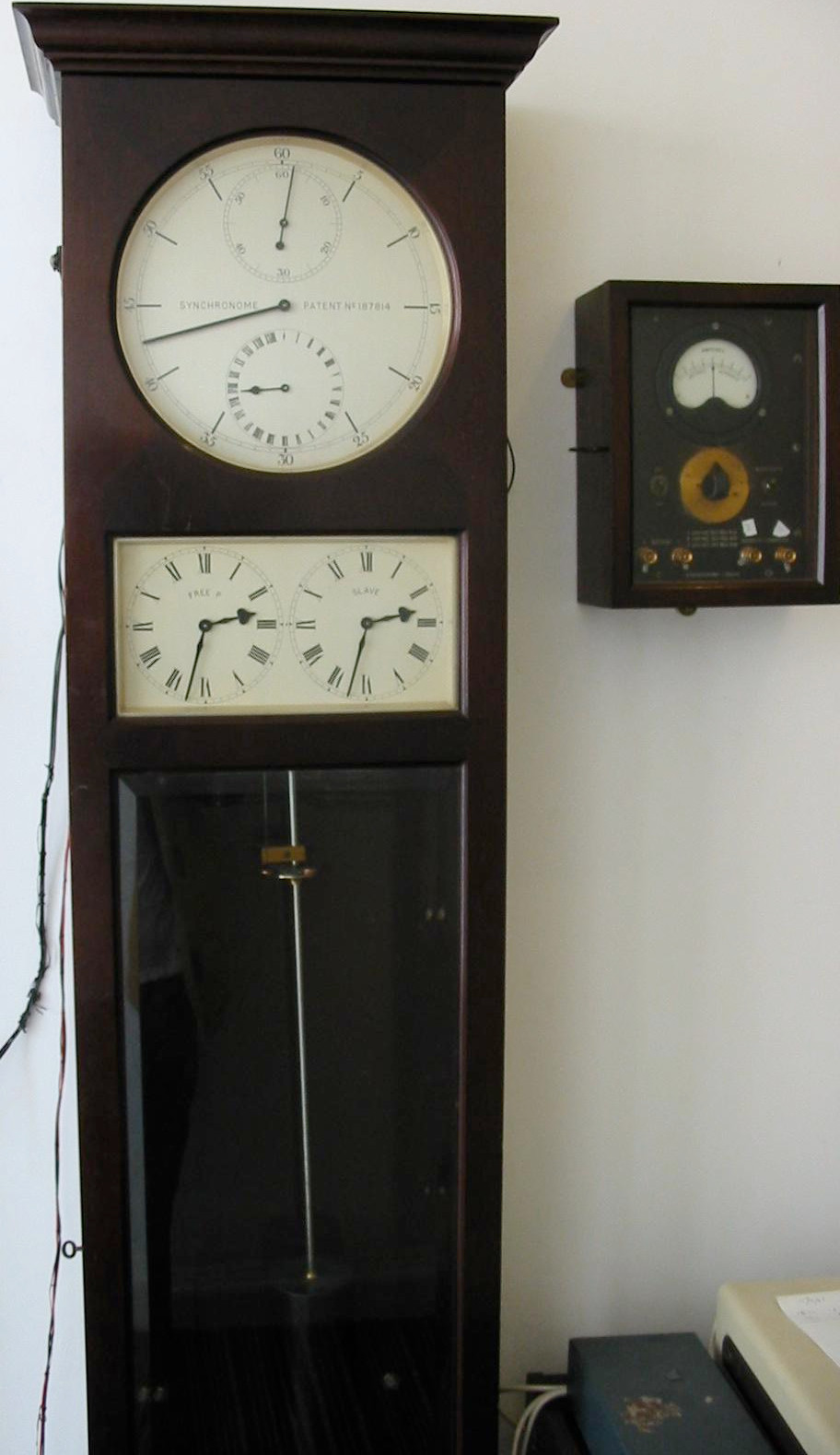 The emphasis of research of Dunsink Observatory was in the beginning in 19th century on positional astronomy besides timekeeping.

Dunsink Observatory was the place where the time standard for Ireland was determined, mentioned several times in James Joyce’s novel Ulysses. The mean solar time at Dunsink was introduced as Dublin Mean Time, the official time in Ireland from 1880 until WWI (cf. GMT); then in 1916, Ireland moved to GMT.

Dunsink Observatory had been under the direction of the Royal Astronomer of Ireland since 1792. It was also affiliated with Trinity College of Dublin -- the Royal Astronomer was an honorary title of the Andrews Professor of Astronomy at Trinity College Dublin (TCD) until 1922. Then in 1940, the Dublin Institute for Advanced Studies (DIAS), School of Theoretical Physics (Schrödinger), was founded, and in 1947, the School of Cosmic Physics (Hermann Brück) was added. 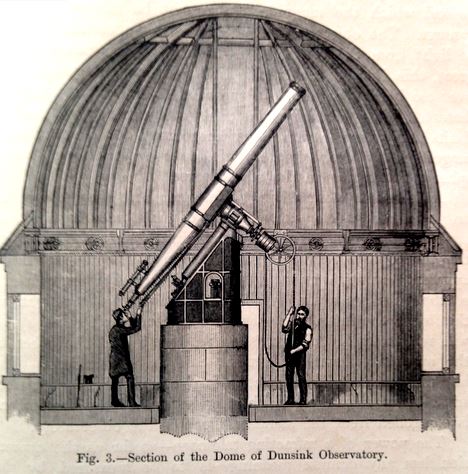 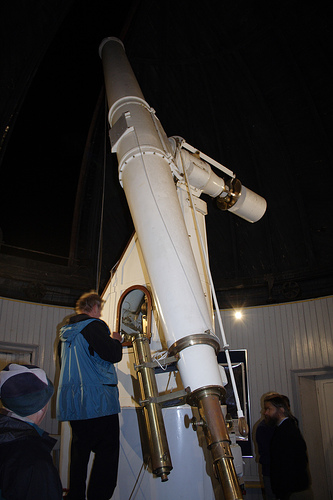 The main instrument of Dunsink Observatory was the South Telescope or 12-inch-Grubb, it is a refracting telescope built by Thomas Grubb of Dublin, completed in 1868 under the direction of Prof. Franz Friedrich Ernst Brünnow (1821--1891).

The achromatic lens, with an aperture of 11.75 inches (30cm), was donated in 1862 by Sir James South (1785--1867), a Victorian astronomer and a friend of the Third Earl of Rosse and T. Romney Robinson at Armagh Observatory. James South had a private observatory Campden Hill in Kensington (*1826), and had purchased an objective lens from Robert-Aglaé Cauchoix (1776--1845) of Paris 30 years earlier (mounted by Troughton in 1831, but this was a failure). He had intended it for a large, but troubled equatorial refractor that came to fruition in the 1830s, but was dismantled around 1838.
A mounting, made by Thomas Grubb of Dublin, was exhibited in the Dublin Industrial Exhibition of 1853. Grubb’s Dunsink mounting was a successor to a similar instrument made already in the 1830s for the amateur astronomer Edward Joshua Cooper (1798--1863) of Markree Castle, County Sligo, also with an objective lens, made by Cauchoix of Paris (13.3 inch, 34cm).
The model for the equatorial mounting of the Dunsink South Telescope was similar to that of the Dorpat Observatory (1824), Estonia, a pioneering mounting, introduced by Josef Fraunhofer (also called German mounting). 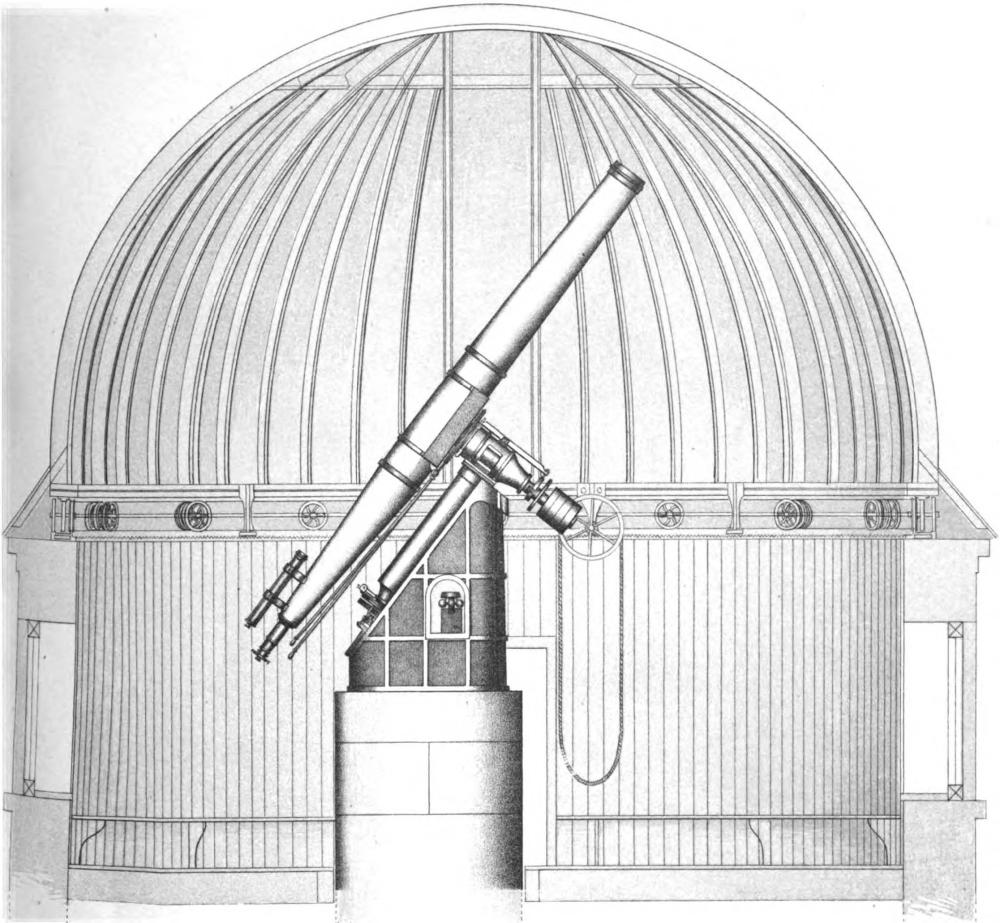 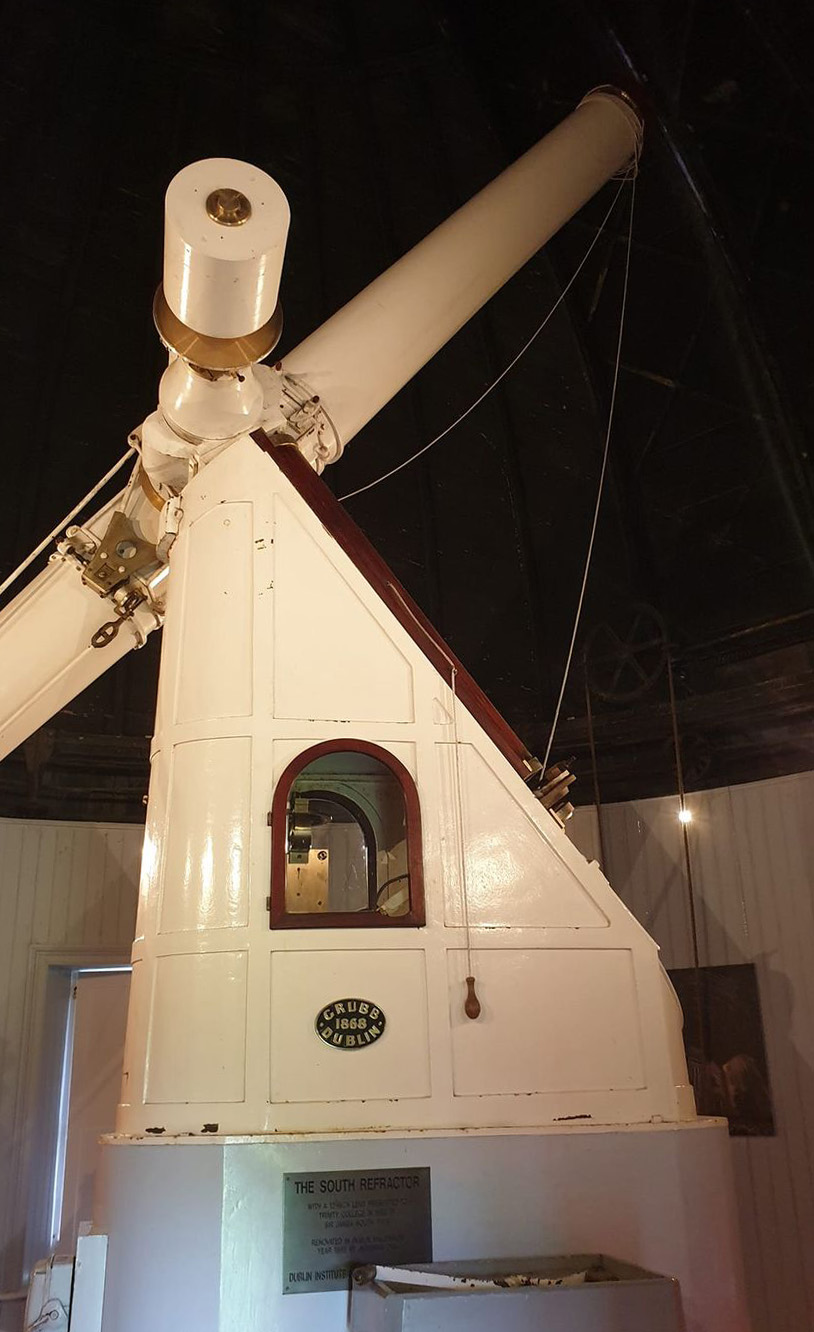 The observatory is in good condition. 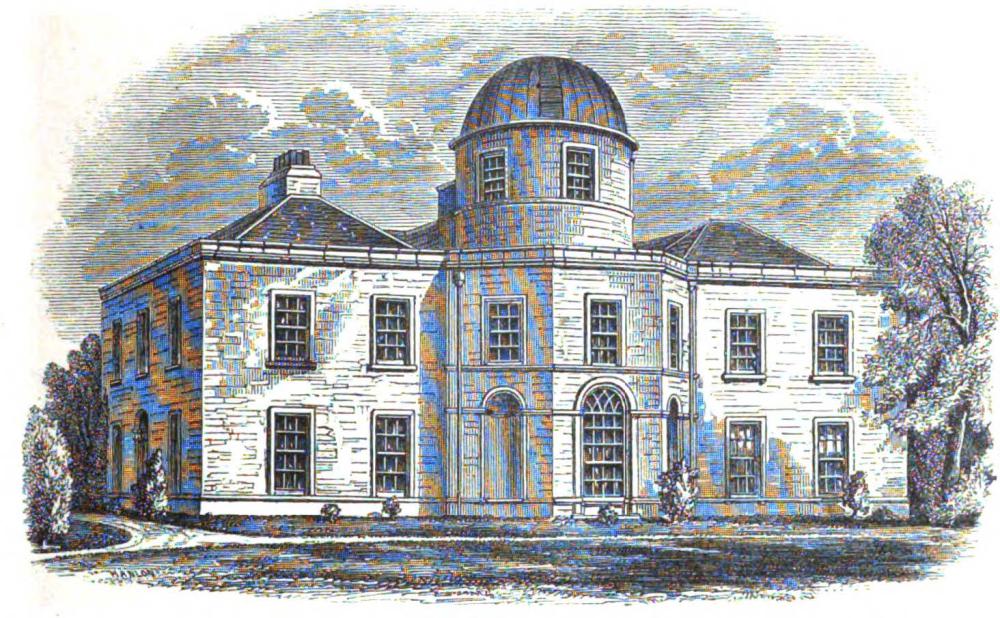 Dunsink Observatory is a one dome observatory building (in the East is the tower with a massive fundament); a round building in the west is the meridian room. The result is a L-shaped ground pattern. The South dome was added later (1868) -- like in Armagh.

The buildings of Dunsink Observatory Dublin (1785), Seeberg Observatory, Gotha (1788) and Armagh Observatory (1790) represent a revolution in observatory design (Gotha is not preserved); the earliest building with a dome -- King’s Observatory, Kew (1768) -- should also be mentioned. The characteristic feature of an observatory, the dome, dominating the architecture, appears for the first time in these observatories. But in Dunsink the original dome (1785), rotatable on wheels on a circular rail; was replaced in 1892 by a slightly larger one with a diameter of 5.5m. The next famous early dome which are well preserved in its original shape is in Tartu Observatory, Estonia (1802) -- a cylindrical dome, and Göttingen Observatory, Germany (1803/16).

In summary, Dunsink is important because of three innovations (Müller 1992): first, the observatory is not in the historical city center, but a considerable distance from the city center (8 km); second, a hemispherical dome in a central arrangement; thirdly, a thick pillar for the instrument in this dome, which is surrounded by a circular wall and thus isolated. 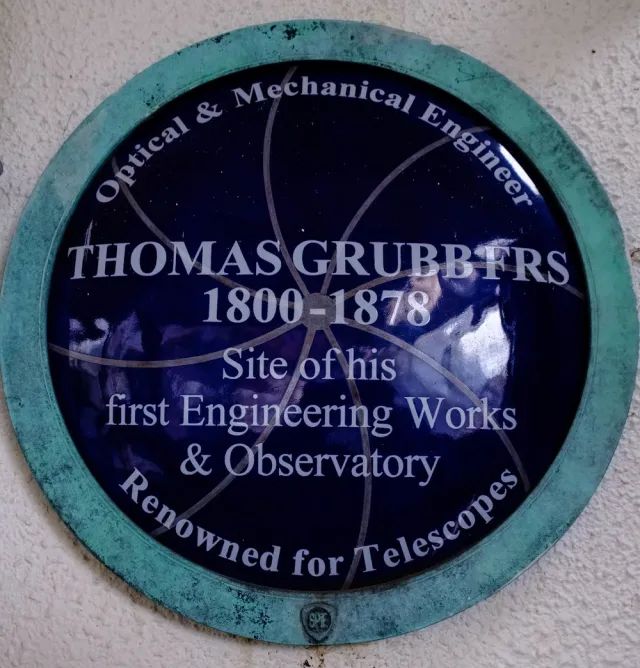 The Grubb firm in Dublin-Rathmines

"The 19th century has often been referred to as the golden age of astronomy in Ireland. It was a period of great innovation in telescope design and in astronomical discovery, in which Irish scientists played a leading role, and one quite disproportionate to the size of the Irish scientific community" (Butler 1994). The highlight is Lord Rosse’s telescope in Birr Castle, which was for over seventy years the largest telescope in the world -- before the erection of the large reflectors Mount Wilson and Mount Palomar in California. Especially important is the firm Grubb in Dublin-Rathmines, which supported Irish observatories like Dublin, Armagh, Crawford Observatory in Cork, with remarkable telescopes.

"This company, originally founded by Thomas Grubb, and later continued by his son Howard, was responsible for many important innovations in telescope and instrument design which subsequently became commonplace and was the only Irish scientific instrument company to achieve international status."
Grubb was also known for constructing accurate electrically driven clock drives for equatorial mounted telescopes; especially in Dublin Observatory we can see a part of the early development. "Thomas and Howard Grubb were particularly well known for their large reflecting telescopes, for which they pioneered the use of equatorial mountings with clock drives. Such improved mountings enabled the telescope to be pointed at any object above the horizon and to maintain its position in the field of view for an extended period."
"The Grubb company from its inception in the 1830’s, survived until quite recently as Grubb & Parsons of Newcastle Upon Tyne, where it built the Anglo-Australian Telescope, erected near Sydney, and the William Herschel Telescope, erected in the Canary Isles" (Butler 1994).

In 2012, the observatory is used mainly for public outreach, small workshops and conferences, and as visitor accommodation for the Dublin Institute for Advanced Studies. Open nights for star gazing are held twice monthly. 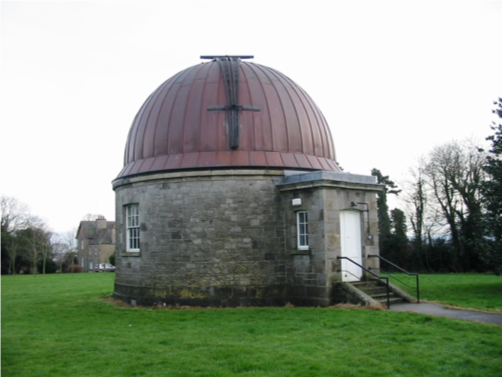 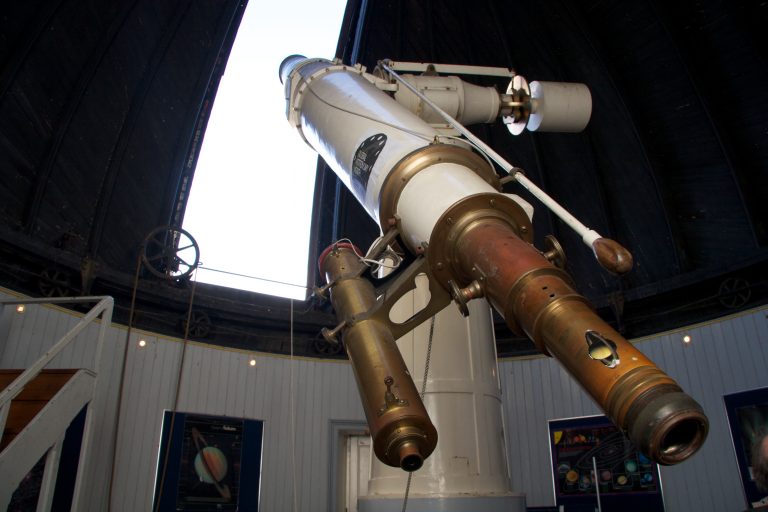 Observatory is part of Dublin Institute for Advanced Studies (DIAS), and is active in cutting-edge astrophysical research.