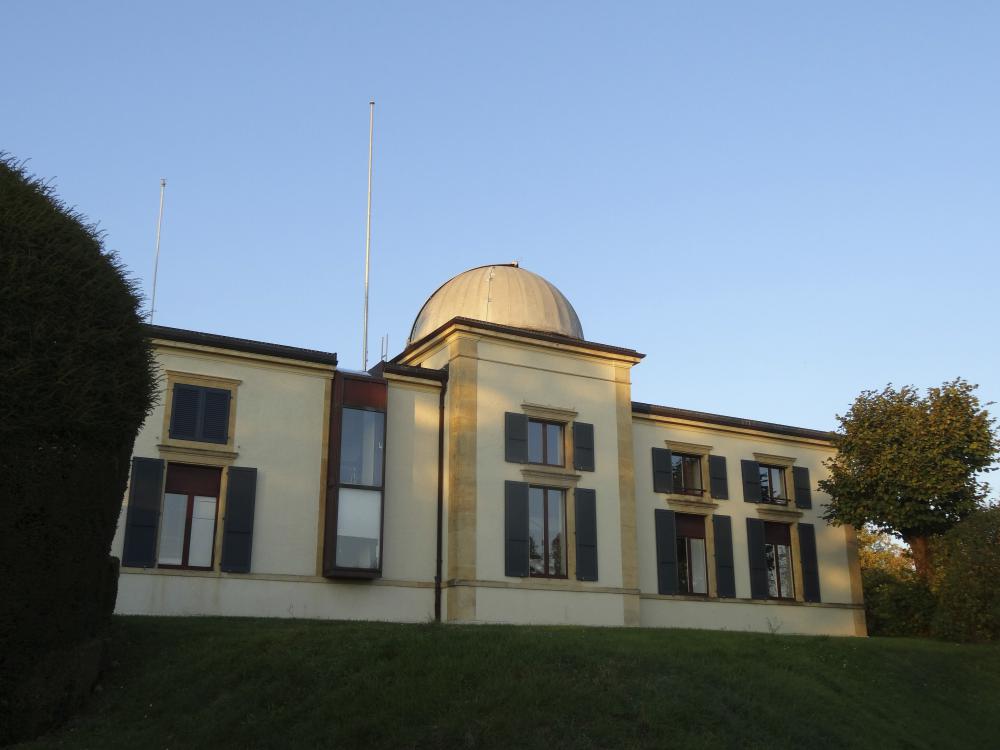 The Cantonal Observatory of Neuchâtel is an astronomical observatory founded in 1858 by the Department of Economics
of the Canton of Neuchâtel with the aim of promoting the development of precision watchmaking.

The historical role of the Observatory of Neuchâtel was the evaluation and scoring the precision of the clocks and chronographs. The precision of chronometers became essential in the 19th century as a navigation aid. Neuchâtel is one of several observatories like Kew/Greenwich, Besançon, Washington DC, and Hamburg, which were important for timekeeping on a national scale. 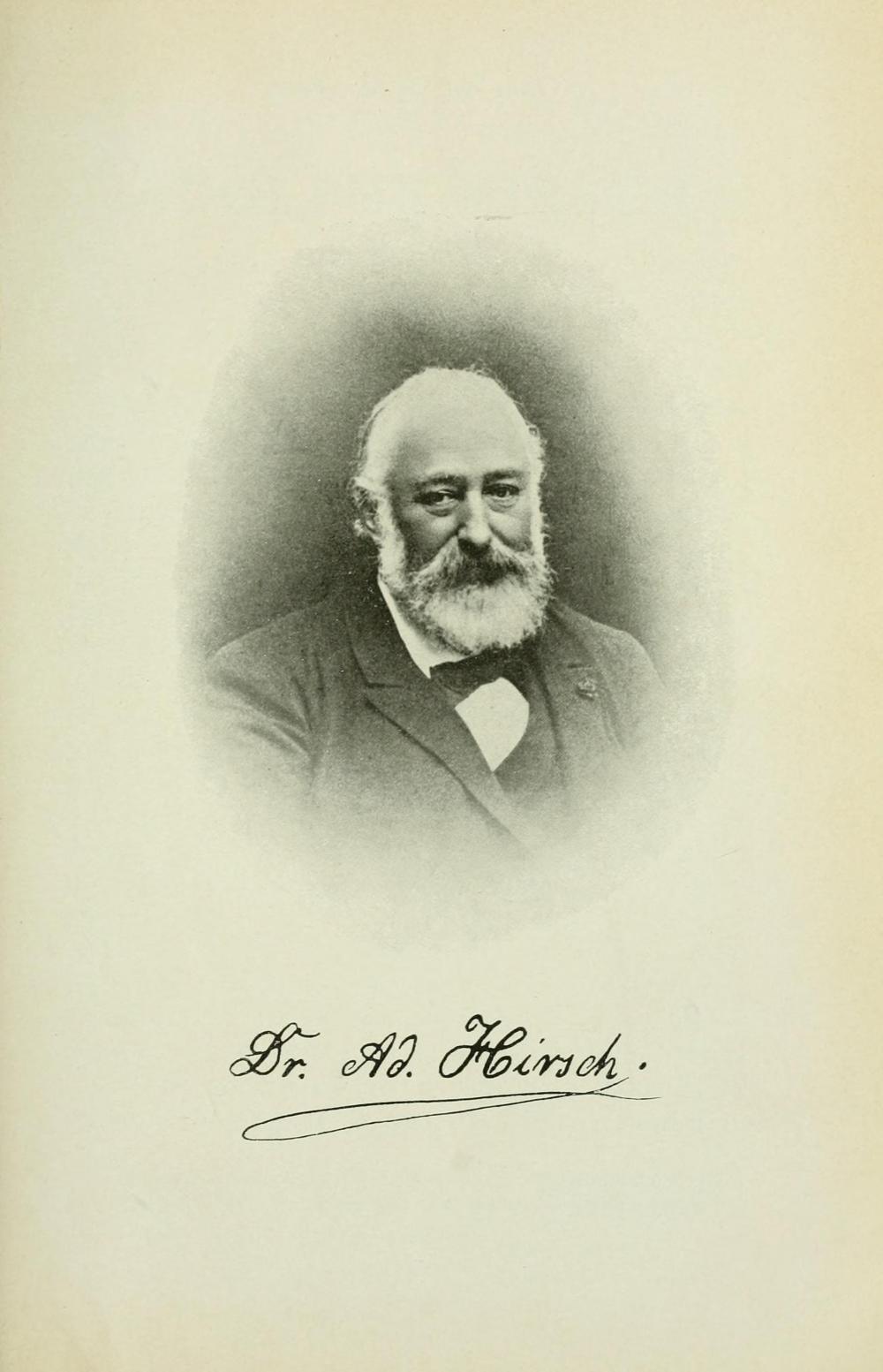 The first director of the observatory was Adolphe Hirsch (1830--1901), who headed the institute from 1858 to 1901. Hirsch studied astronomy at the universities of Heidelberg, Berlin and Vienna. He was interested in astronomy and geodesy. As secretary and later as president of the Geodetic Commission, he participated in the basic measurements for the triangulation of Switzerland. He got a call as a professor of geophysics and astronomy at the Neuchâtel Academy from 1866 to 1901. As secretary of the International Association for Geodesy and the Bureau International des Poids et Mesures (BIPM) in Paris, he actively promoted international cooperation. 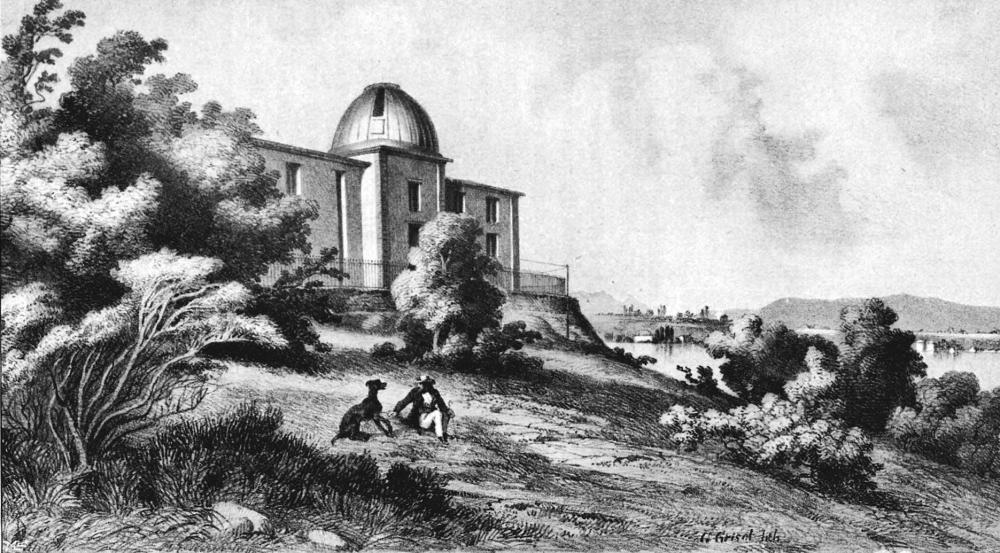 Fig. 3. The Meridian building and the dome of the Cantonal Observatory of Neuchâtel in 1862 (in the foreground the first director Adolphe Hirsch and his dog) (© Archives de l’Etat de Neuchâtel)

But Hirsch’s main duty -- besides other scientific activities such as geodesy, metrology, seismology and meteorology -- was the timekeeping, the determination of time in the observatory by observing the time of transit of a particular star through the (meridian. In addition, the distribution of time was an important task, and Hirsch succeeded in ensuring this precise time required by the watch industry. The time was first communicated to the industry by telegraph, so that factories could adjust their watches with precision, then the time signal was broadcasted daily on the radio since the 1930s. Another task was to issue certificates proving the reliability of the Neuchâtel watches, cf. Observatory Chronometer Database (OCD).

The director’s dwelling house was built in 1888, used first by the assistant manager. The director took this residence after the death of Adolphe Hirsch in 1901, who preferred to live in the main building. In addition, there is a boiler room for all the buildings on the site. In 1900, the pavilion of the mechanic-concierge was built, but it is not preserved.

Adolphe Hirsch bequeathed his fortune to the city of Neuchâtel to increase the activity of the observatory. His will mentions the construction of a telescope in a new building; he had only a 11.7-cm-meridian telescope, and another 16-cm-telescope, installed under the dome of the main building. 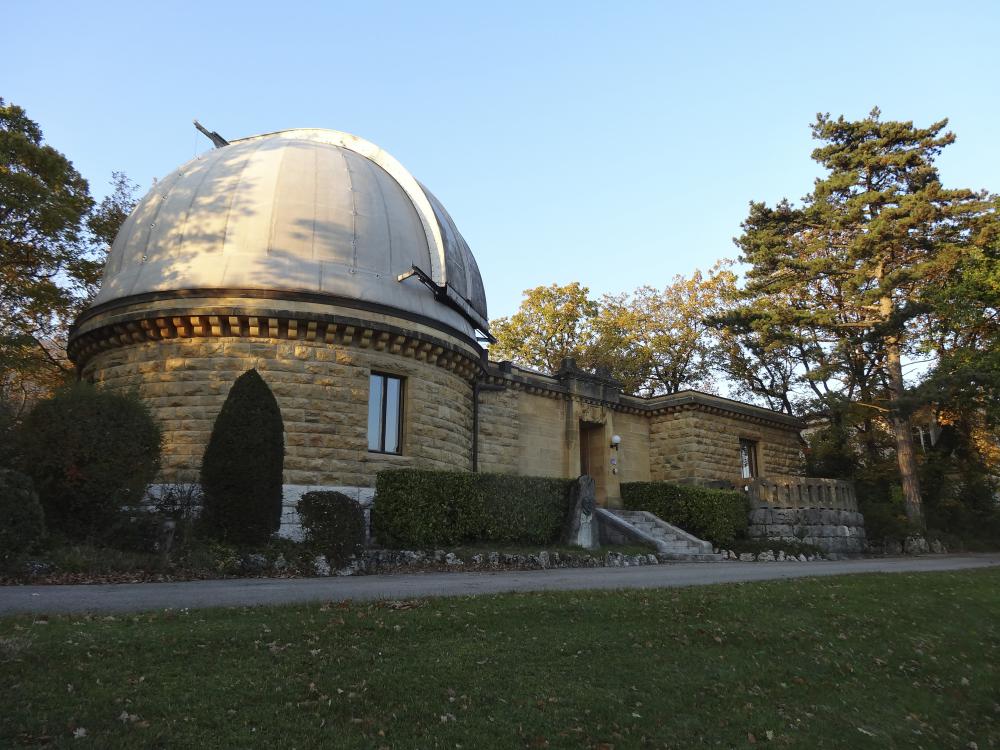 Under Louis Vilmar Arndt (1861--1940), Adolphe Hirsch’s successor as director, the observatory got an extension building, Pavillon Hirsch, an Art Nouveau building, constructed in 1909/11, and named after the first director. It was built by Charles l’Eplattenier (1874--1946) in Swiss Art Nouveau or Style Sapin ("Pine Tree Style"). The Pavillon Hirsch was not decorated, just in the style "from follows function".
The interior of the entrance hall is also in Art Nouveau style. The perimeter was decorated with copper panels with the 12 signs of the zodiac between the black granite pilasters. In addition, a marble mosaic floor, a cloister vault with stars and polychrome stained-glass windows "contribute to the harmony of the place". 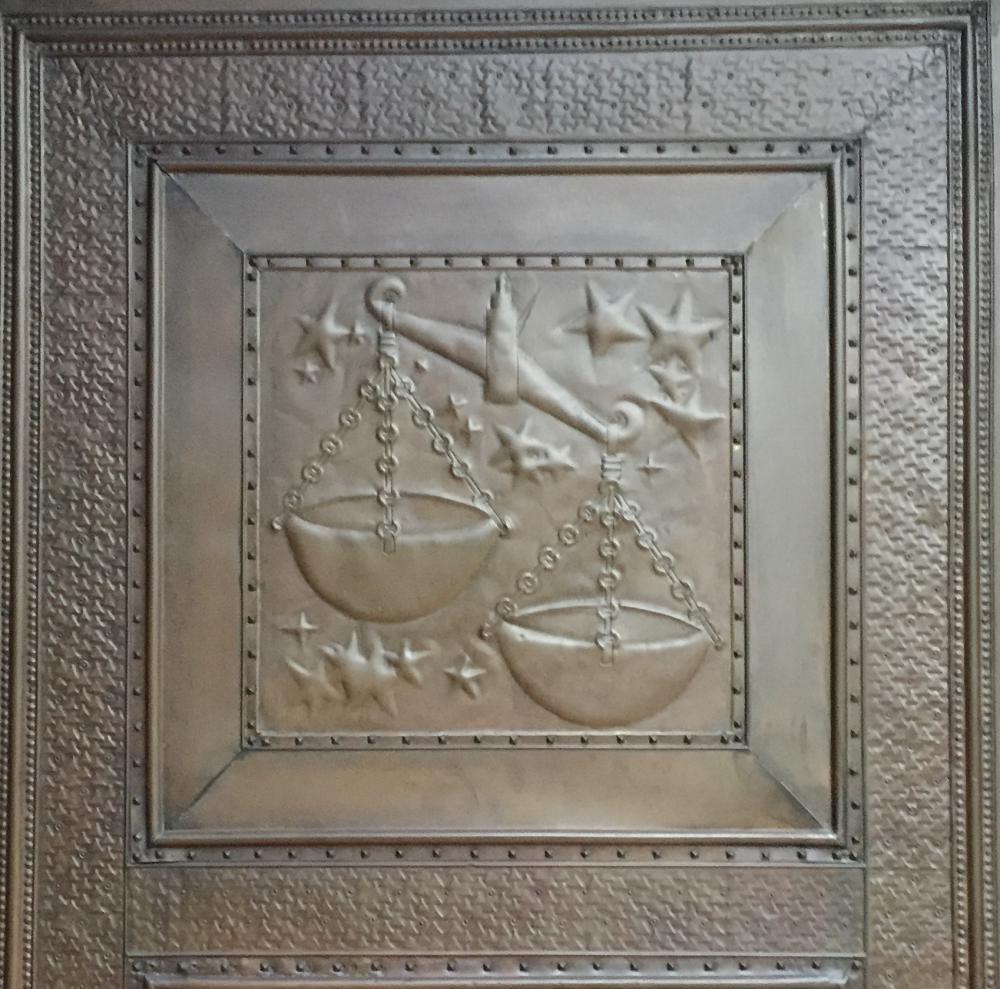 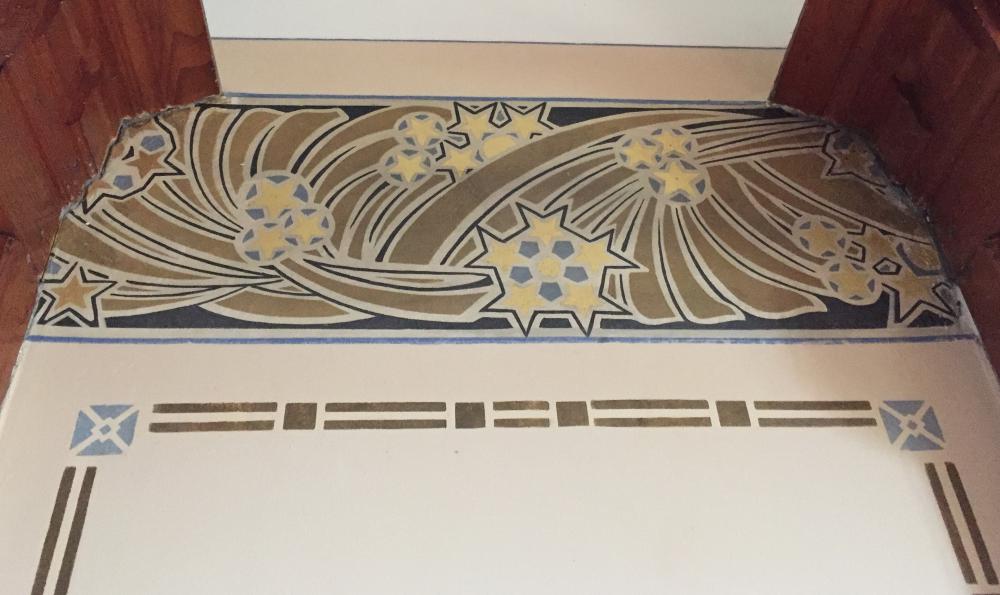 The observatory succeeded in acquiring a large 30cm/36-cm-triple-refractor. The Pavillon Hirsch is equipped with this telescope, housed in a wooden dome of 8m in diameter, the exterior of which is insulated and painted white in order to best reflect sunlight and to preserve the coolness inside the building and prevents turbulence during the long exposures. The dome is mounted on a circular rail and rotates 360°, using an electric motor. The Pavillon Hirsch houses besides the large Zeiss telescope, a spectroscopy laboratory and a photography laboratory, and a conference room. 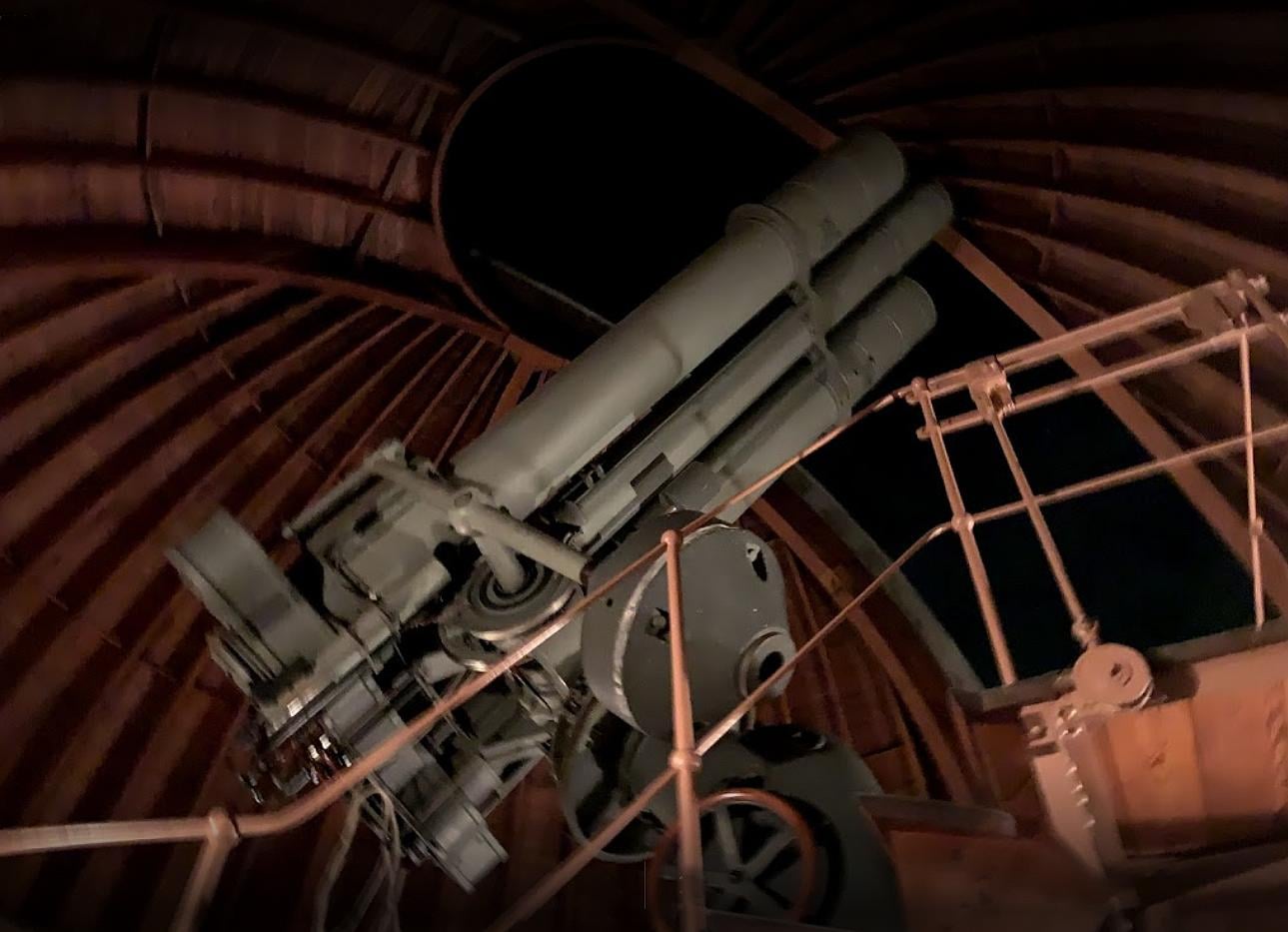 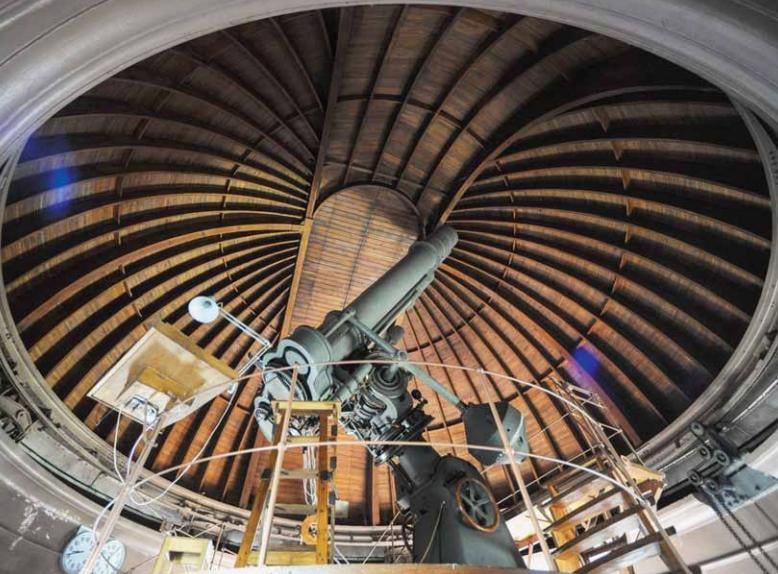 The geophysicist Alfred de Quervain (1879--1927) was assistant at the observatory of Neuchâtel from 1902 to 1905. In 1926, a Quervain-Piccard seismograph weighing about 18 tonnes was installed in the basement of the Pavillon Hirsch, which operated until 1971.

Until 1951, the meridian circle was used for timekeeping. The astronomical clocks with glass cloche were the best known timepieces just before the quartz crystal clocks. These were used for timekeeping from 1945 to 1953.
In the 1950s, the Neuchâtel Observatory was responsible for creating the first atomic clocks (1959). Before the timekeeping activities ended in 2007, the observatory worked for the European Space Agency (ESA) and its Galileo satellite project. The Neuchâtel Observatory is an important Swiss scientific and technical heritage as "time factory". 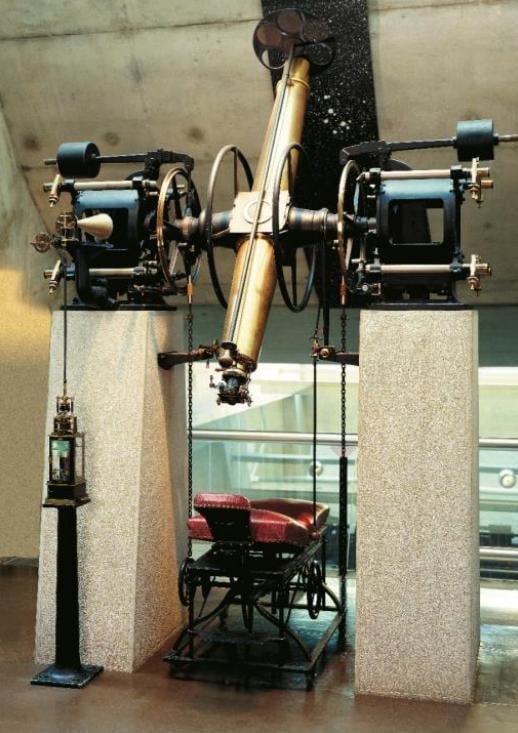 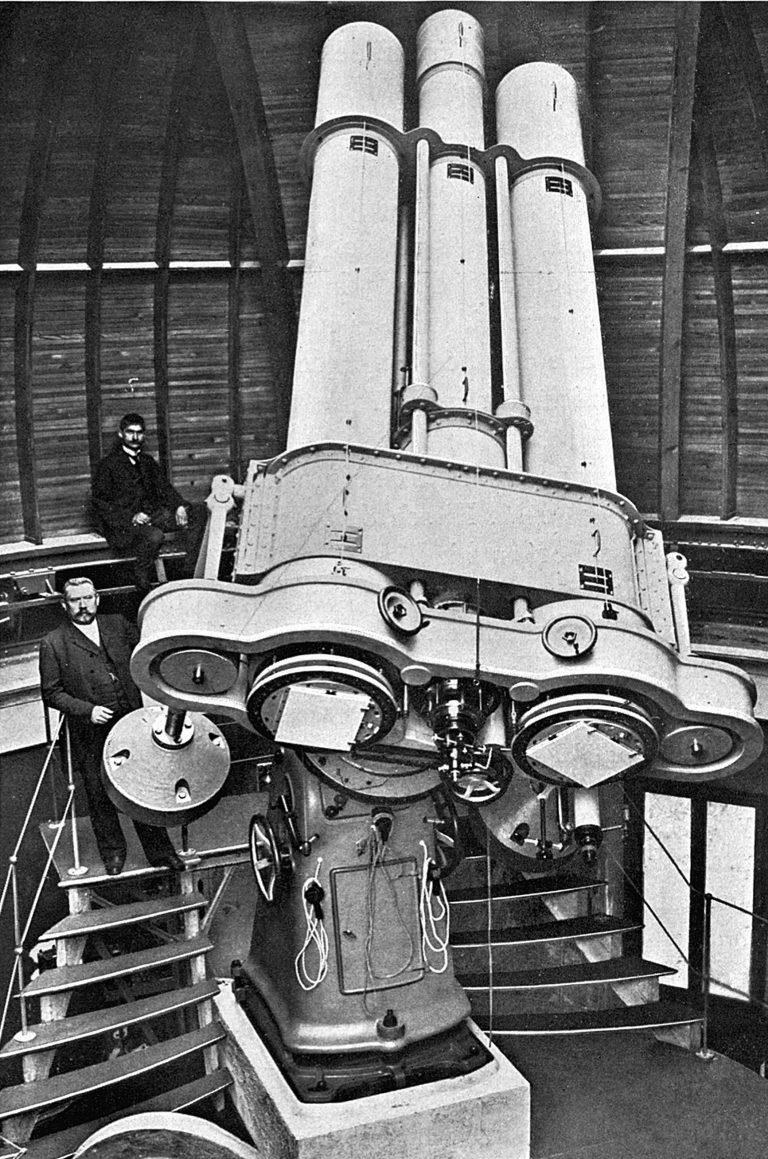 The triple refractor was built by the Zeiss company of Jena in 1912. It is an astrograph for photographing the sky on glass plates, equipped with two photographic tubes with a diameter of 36cm and a focal length of 3.6m (f/10); in addition the central tube is a 30-cm visual achromatic refractor with 4.5m focal length (f/15). The astrographs were equipped with spectrographs in order to study the chemical composition of stars, as well as their physical properties. With these astrographs with quartz lenses he wanted to study the ultraviolet radiation, which was a revolutionary idea for the time. But what was not known at that time, most of the ultraviolet radiation is absorbed by the Earth’s atmosphere, which is is opaque to UV. Thus these astrographs were not really usable. So he had to use mainly the 30-cm visual refractor. 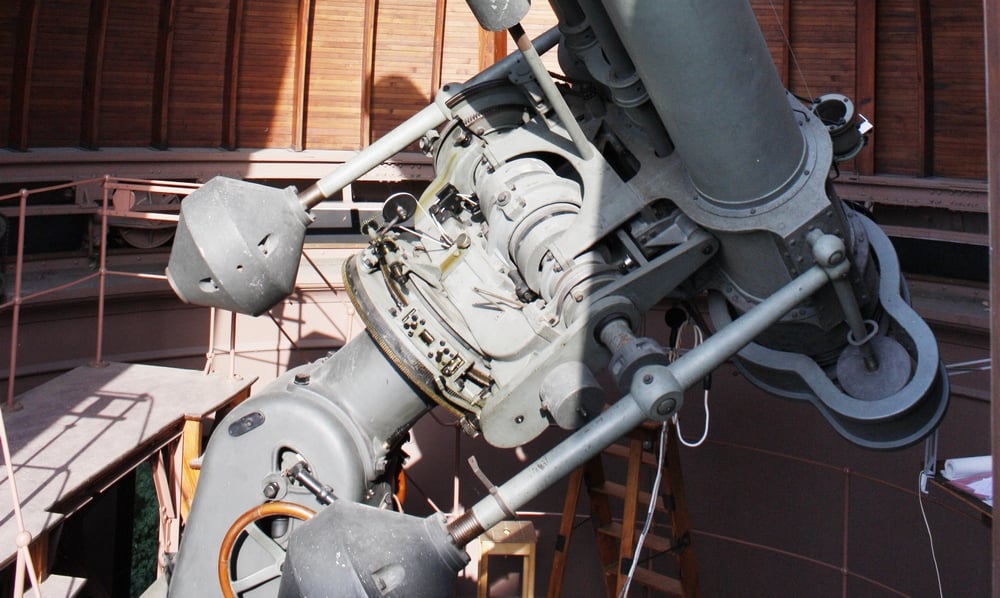 Fig. 6b. Mounting of the Triple-Refractor, Carl Zeiss of Jena (1912) (Photo Phil Bissop) 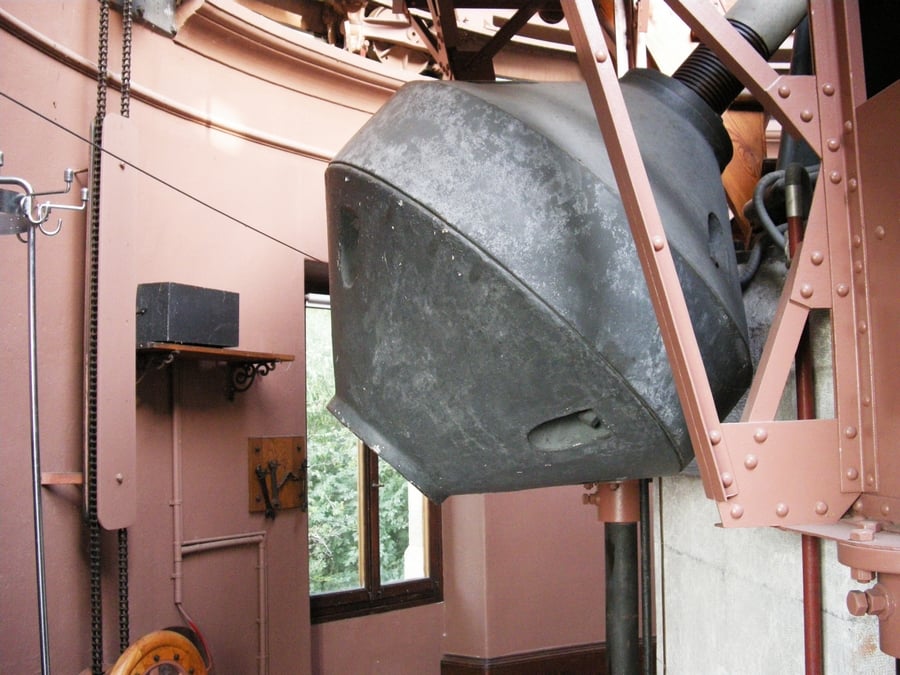 Fig. 6c. Counterweight of the Mounting of the Triple-Refractor, Carl Zeiss of Jena (1912) (Photo Phil Bissop)

A Zeiss equatorial mounting is oriented parallel to the axis of rotation of the Earth, and this system allows you to have only one rotational movement to correct the motion of the stars. Three massive counterweights, the largest of which is nearly a tonne, help balance the bezel. At that time, care was taken to place the instruments directly on a masonry plinth, resting directly on the Rocher du Mail, without any connection to the building. This design avoids the transmission of vibrations from the building to the telescope. In order to make observing easier, an elevating platform was constructed by Zeiss. 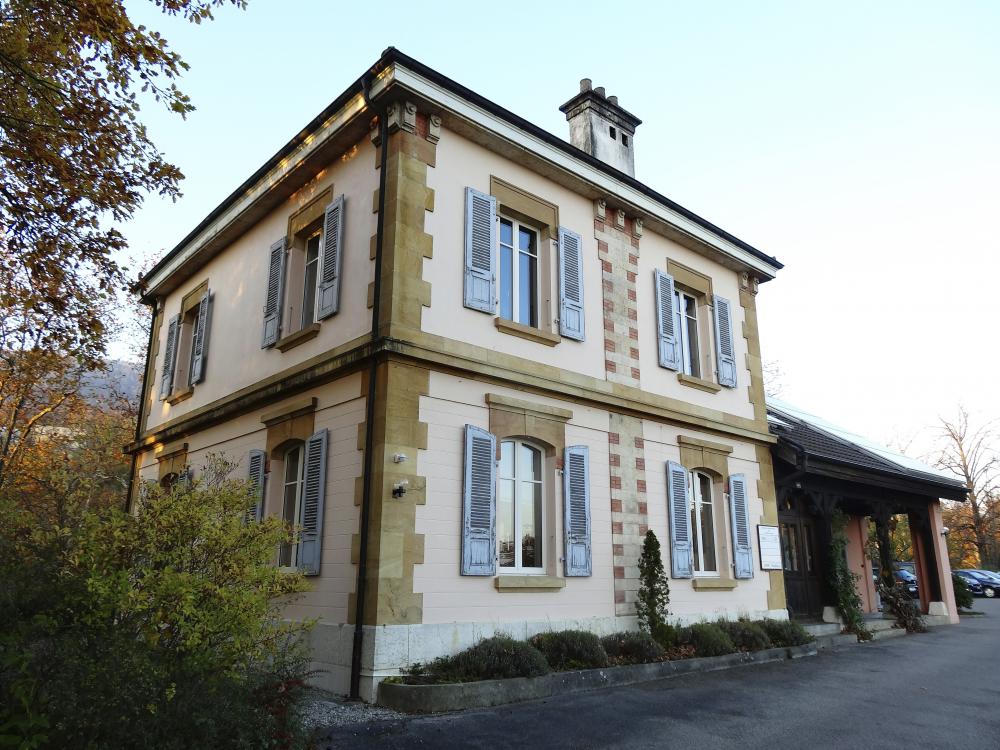 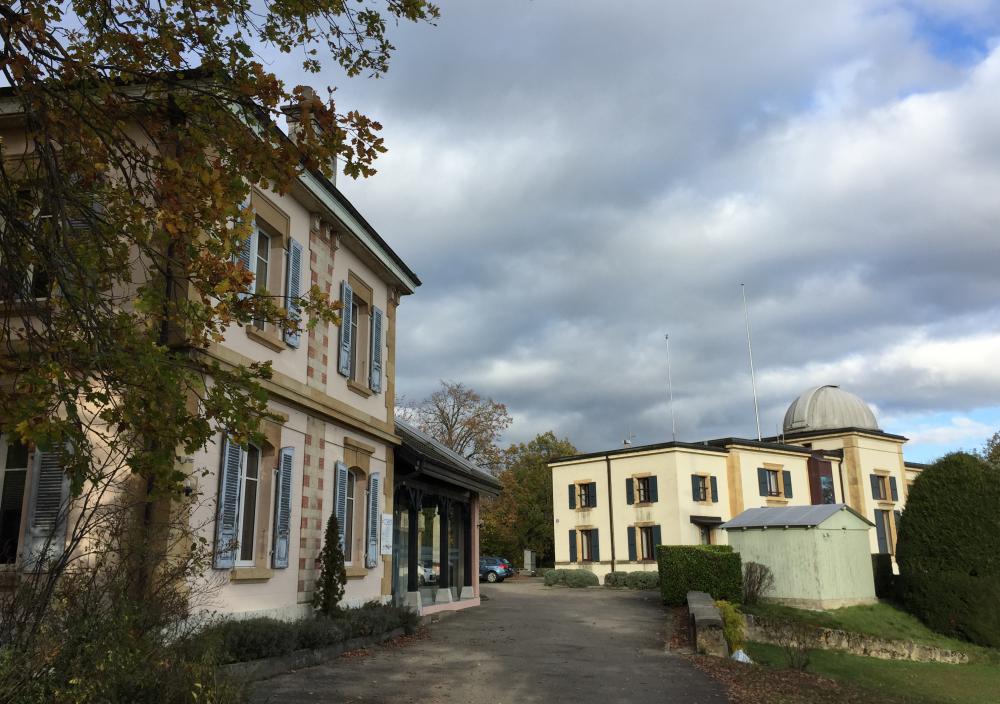 The Observatoire cantonal de Neuchâtel is one of the cultural property of national importance and is preserved well.

The Pavillon Hirsch is a Swiss Art Nouveau building. The so-called Style Sapin or "Pine Tree Style" was created in the city of La Chaux-de-Fonds in Switzerland by the Swiss artist Charles l’Eplattenier (1874--1946). It is still almost in the state of its construction in 1912, and has been classified as a historical monument for its architectural qualities and its Art Nouveau interior decoration.
The Pavillon Hirsch with the triple Zeiss refractor from 1910/12 is a unique piece in the world in this version. In the basement is still the seismograph of Quervain-Piccard with its mass of 18 tons (1928-1971). It is fully restored and it will be possible in the future to make demonstrations and transmit data. The precise astronomical clocks have been deposited at the MIH for conservation, but reinstallation in the observatory is envisaged.

For nearly 150 years (1858--2007), the Neuchâtel Observatory has been a world reference for determining and distributing the time comparable to several observatories like Kew/Greenwich, Besançon, Washington DC, and Hamburg, which were leading in the field of timekeeping (for the watchmaking industry, for the public and for navigation).

After over hundred years of scientific importatnce of timekeeping, Neuchâtel Observatory is used as a public observatory since the 2007 by the Société Neuchâteloise d’Astronomie (SNA).
The central tube of the large refractor, designed for visual observation, gives excellent images of the moon and planets such as Mars, Jupiter or Saturn, which delights visitors. Because of the location of the observatory, which is found in the city of Neuchâtel, the observation of the deep sky (nebulae and galaxies) is rather disappointing.

The EspaceTemps association (formerly AMSTN) aims to promote better knowledge of science and technology. It aims in particular to safeguard this emblematic object of Swiss scientific heritage and to make it known to the public through exhibitions and guided tours. The memory space project will be installed in the Pavillon Hirsch.

Before 1967, a second was defined in function of the earth’s rotation, thus the Neuchâtel Observatory had the responsiblity for calibrating the clocks by regular astronomical observations and announcing the time for the public. Today the telescopes in the Observatory of Neuchâtel are only used as historical instruments; watchmaking calibration is now provided by atomic clocks.