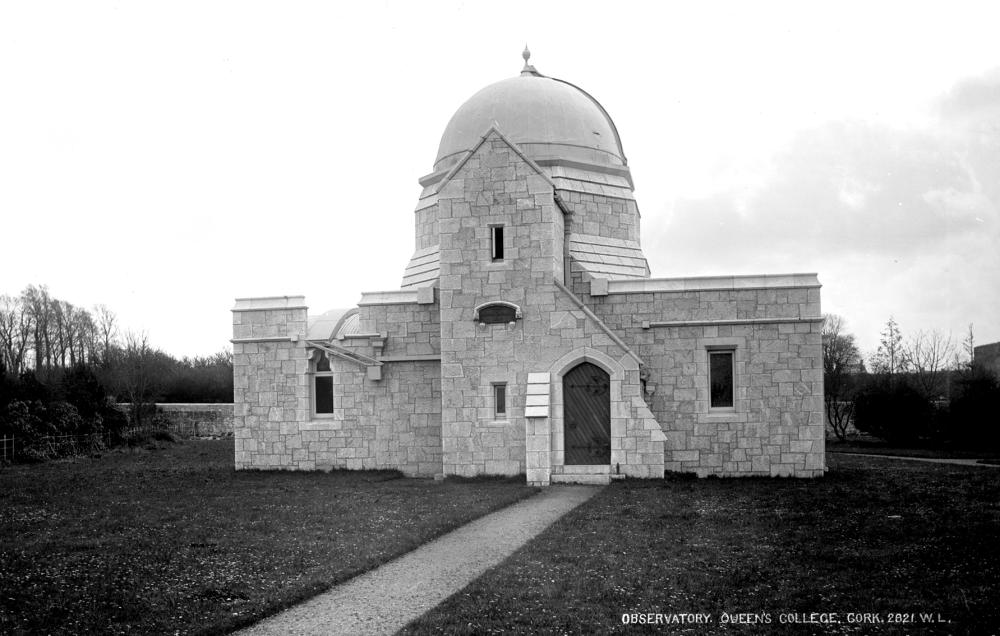 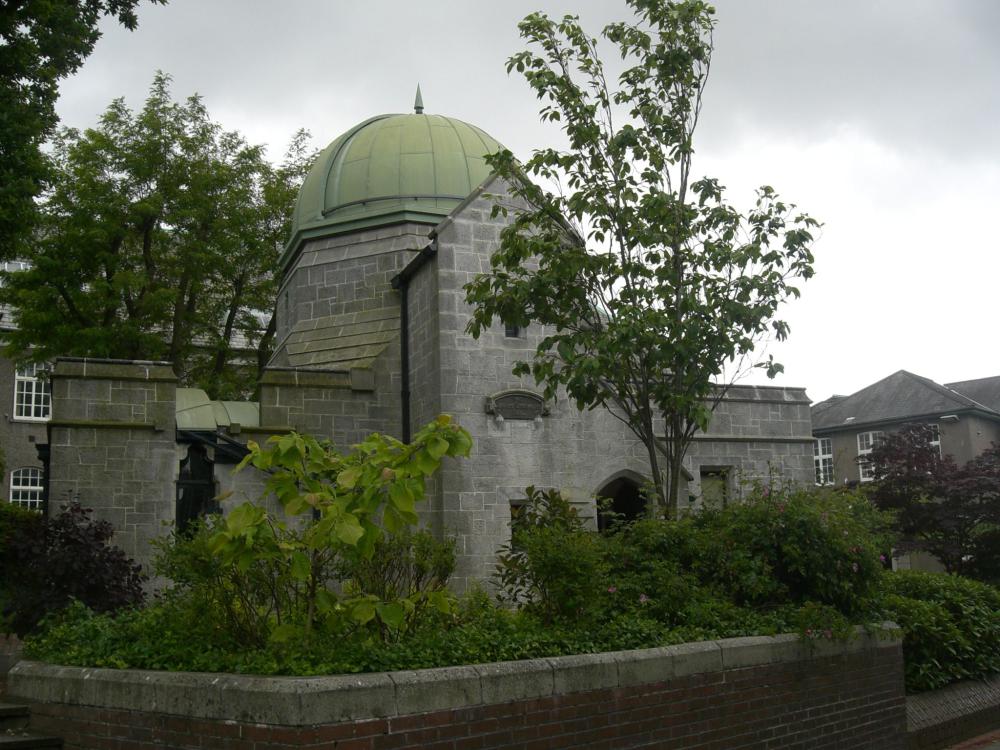 The University College Cork (UCC since 1908) was founded in 1845 as one of three Queen’s Colleges -- at Cork (QCC), Galway and Belfast -- in memory of Queen Victoria. The limestone buildings of the Main Quadrangle, inspired by the famous  universities of the Middle Ages, were built by the Irish architects Thomas Deane (1792--1871) and Benjamin Woodward (1816--1861) in 1849.

William Horatio Crawford (1815-1888), Irish brewer (Beamish & Crawford brewing company in Cork) and philanthropist, donated £1,000 for the construction of the observatory on the campus of the Queen’s College and for acquiring the instruments.

The Building of Crawford Observatory, Cork

"The Crawford Observatory building reflects the ecclesiastical style of the early buildings at UCC and is one of very few in the UK or Ireland that has Gothic architectural features (Morton-Gledhill 1989). The general plan follows the layout developed originally in 18th century Scandinavian observatories, in the Radcliffe Observatory, Oxford and later in many European and American Observatories, with a two storey central section flanked by single storey wings, one to the east and one to the west of the central block. The purpose of this layout was
(i) to provide stable foundations (close to the ground) for position measuring instruments, such as the Transit Circle, and
(ii) to place the equatorial telescope, which needed to view the whole sky, high in the building so that it had an uninterrupted view of the sky down to the horizon.
At Cork the second wing (the west) was used to house the siderostatic telescope which was primarily intended for observation of the Sun" (Butler 1994).

Crawford Observatory, Cork, also participated in the famous "Carte du Ciel" international photographic star catalogue and photographic celestial chart project (showing stars down to the 14th magnitude), started in 1887. In the same year, Grubb in Dublin-Rathmines built seven of thirteen normal astrographs for the "Carte du Ciel" (others went to Greenwich, Oxford, Melbourne, Mexico, Perth and Cape Town); especially the 13-inch astrographs are all designed to produce uniform photographic plates, one is in Crawford Observatory; a number of trial plates survived in the observatory. 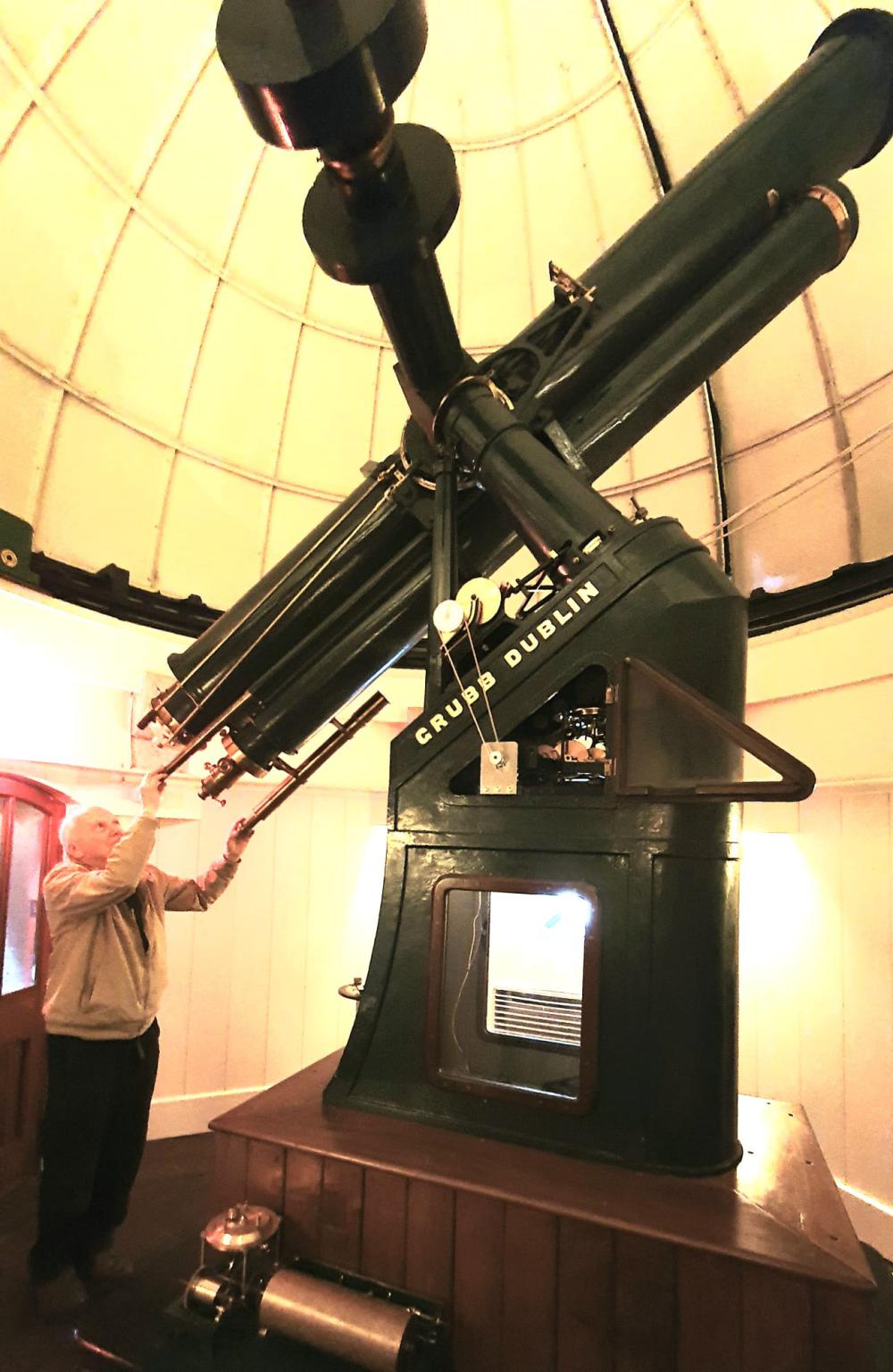 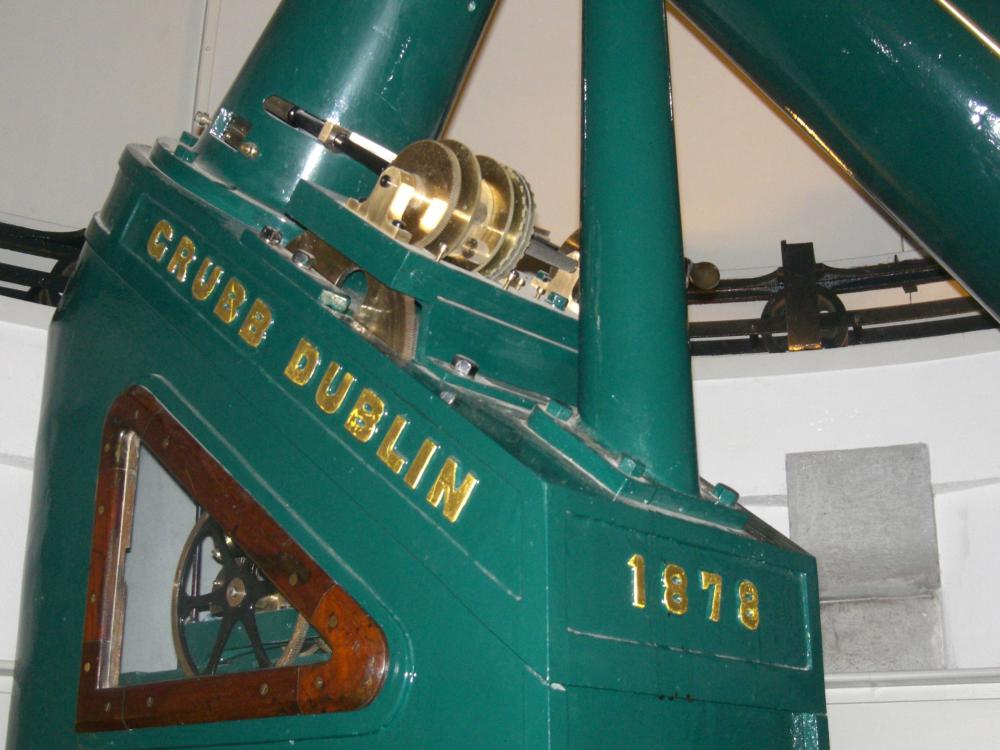 "The Transit Circle is situated in the single storey east wing. It is a superb example of Grubb’s workmanship and is undoubtedly the most complete and best preserved instrument of its type in Ireland today. Transit instruments were employed to measure accurate positions of stars; the basic raison d’etre of a 19th century observatory. More precise stellar positions were required for: studies of the dynamics of the solar system and tests of the validity of Newton’s Theory of Gravitation, and for the improvement of navigation at sea. Several such instruments operated in Ireland in the 19th century, including a Pistor and Martin Circle at Dunsink, a Jones Transit Instrument and Mural Circle at Armagh, and a Transit Instrument by Troughton and Meridian Circle by Ertel at Markree. However, the Cork instrument is the only one to survive intact to the present day, in its original condition and setting. The Transit Circle was designed with a view to mechanical stability - an important requirement for such accurate work. This, together with the difficulty astronomers had with reading metal scales by reflected light, lead Grubb to implement its most original feature, namely the use of declination scales inscribed on glass and read with transmitted light. This was a new development by Grubb which has subsequently found favour by many astronomical and surveying instrument manufacturers.
The apparatus for reversing the instrument appears to be complete and convenient to use. Similarly the shutter design is novel and an advance on earlier arrangements. Outside the building, to the north and south, are cradles for a collimator which was required to allow the instrument to view distant meridian marks which provided reference points to check the stability of the instrument. The northern mark would be expected to be positioned on the south facing wall of the College Quadrangle. A d.c. lighting system, operated with power from the tramways, was installed to illuminate the circles (and presumably the cross-wires). It is unlikely that the instrument saw much active service and this fact is responsible for its present excellent condition" (Butler 1994).

"A telescope which followed stars automatically to counteract the Earth’s rotation and gave an image in a stationary eyepiece teased the imagination of a number of telescope builders of the 19th century. The concept, which originated in France in the 1830’s, intrigued Howard Grubb who designed several telescopes on this principle. The Cork instrument is the earliest one he actually built. Later he constructed a siderostat for Kodaikanal in India (C 1900) and further developed the principle with a type of Coude siderostatic telescope for Cambridge University (The Sheepshank Telescope). His basic design of a rotating polar telescope, with a flat mirror at the bottom to reflect the sunlight, is an extremely simple and elegant solution to the problem. In the final decade of the 19th century, the principle of the siderostatic telescope developed into the `coelostat’ which has subsequently been employed largely for solar observations. The Cork siderostatic Telescope, though small, is an important link in the development of this type of instrument which, though it did not gain popularity for stellar work, reached its ultimate fruition in the giant polar solar telescopes such as that at Kitt Peak, Arizona. The Cork Siderostatic Telescope is mounted on a trolly which moved on rails into a convenient position at a window in the south wall of the west wing of the building where it could view the sky south of the zenith. The window has subsequently been covered over, but the rails may still survive under the floor panels. The instrument itself, apart from a little corrosion, is in near perfect condition and has probably seen very little active use" (Butler 1994). 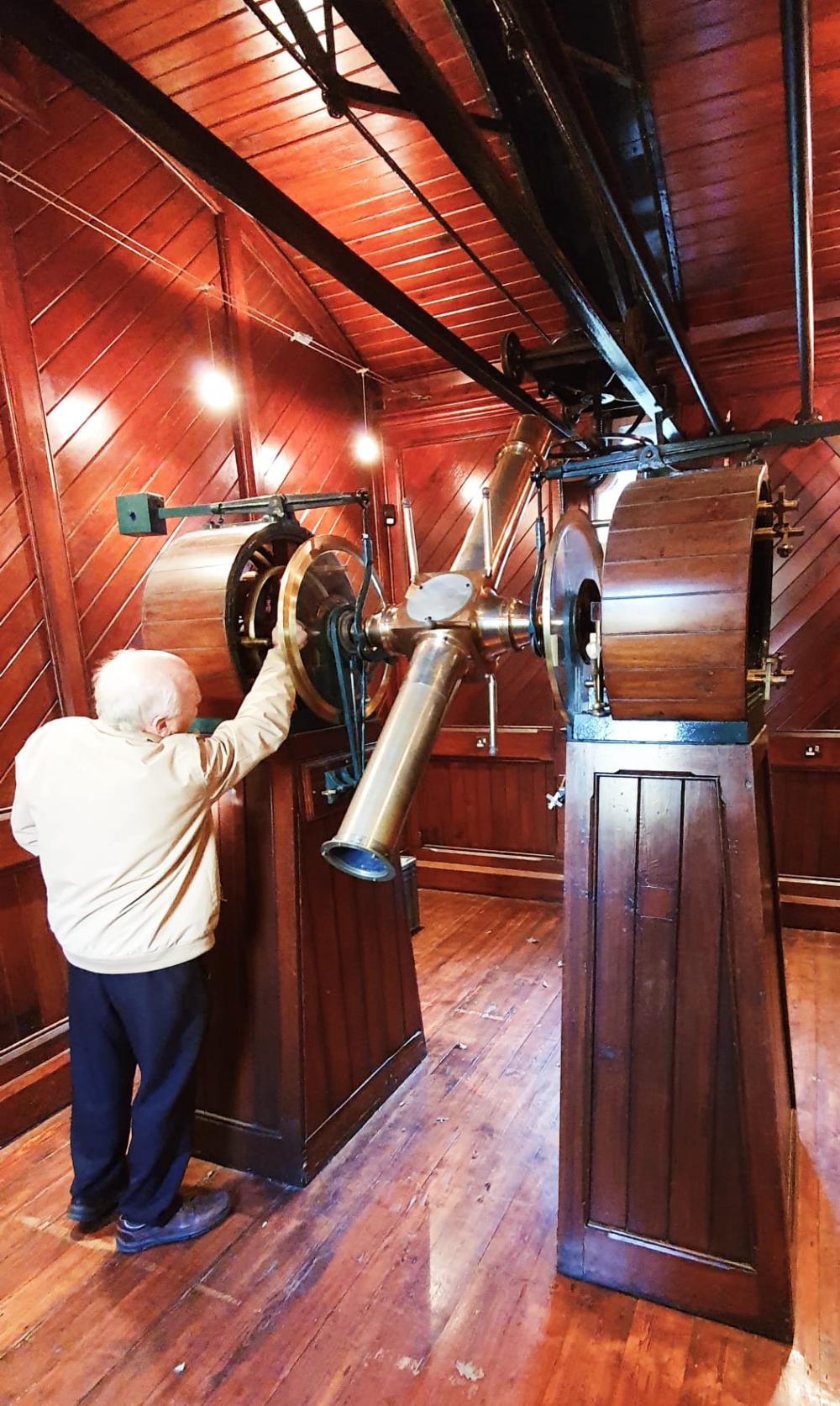 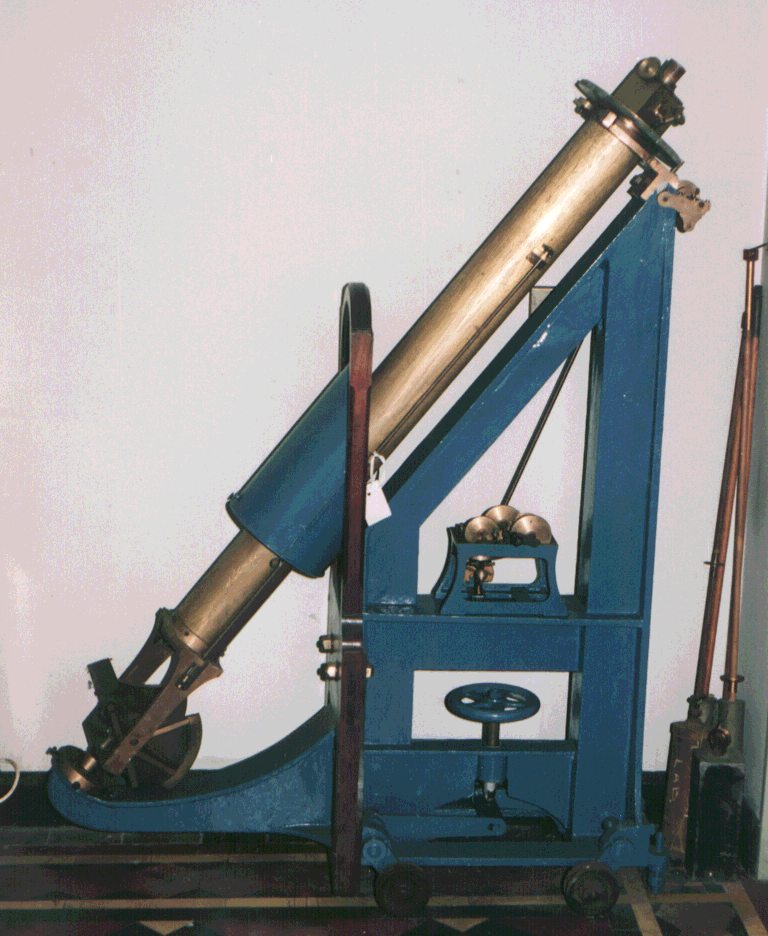 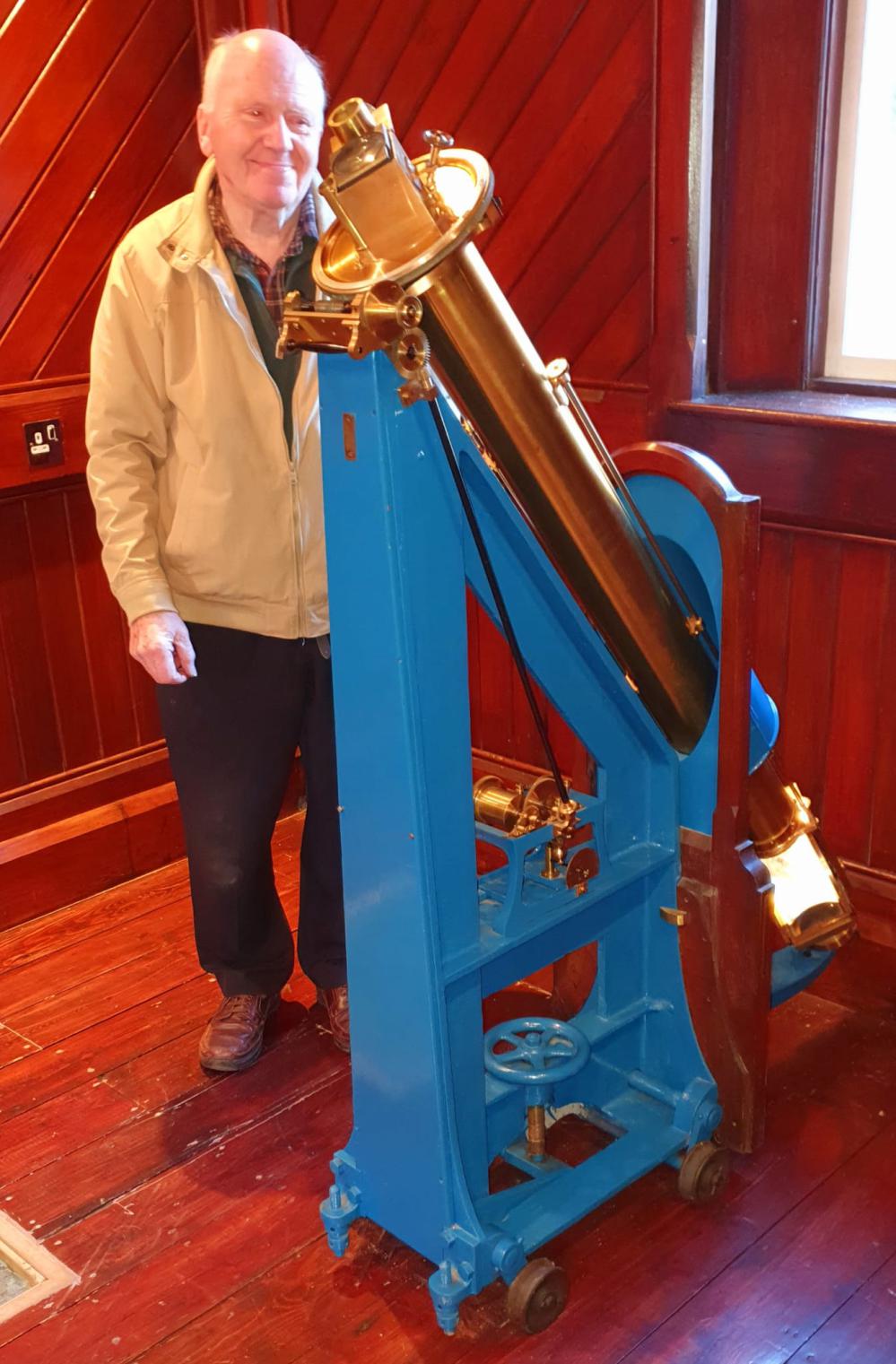 Fig. 5a. Logo of the University College Cork

The building of Crawford Observatory, University College Cork, is well preserved, a remarkable state of preservation of the original condition of the building including the instrumentation. It was restored (500,000 Euro) and re-opened in 2006 with the generous support of Alumni and Friends of UCC, through Cork University Foundation. The observatory is a listed building and is considered very much part of the Queen’s College legacy (Irish Examiner, 2006). 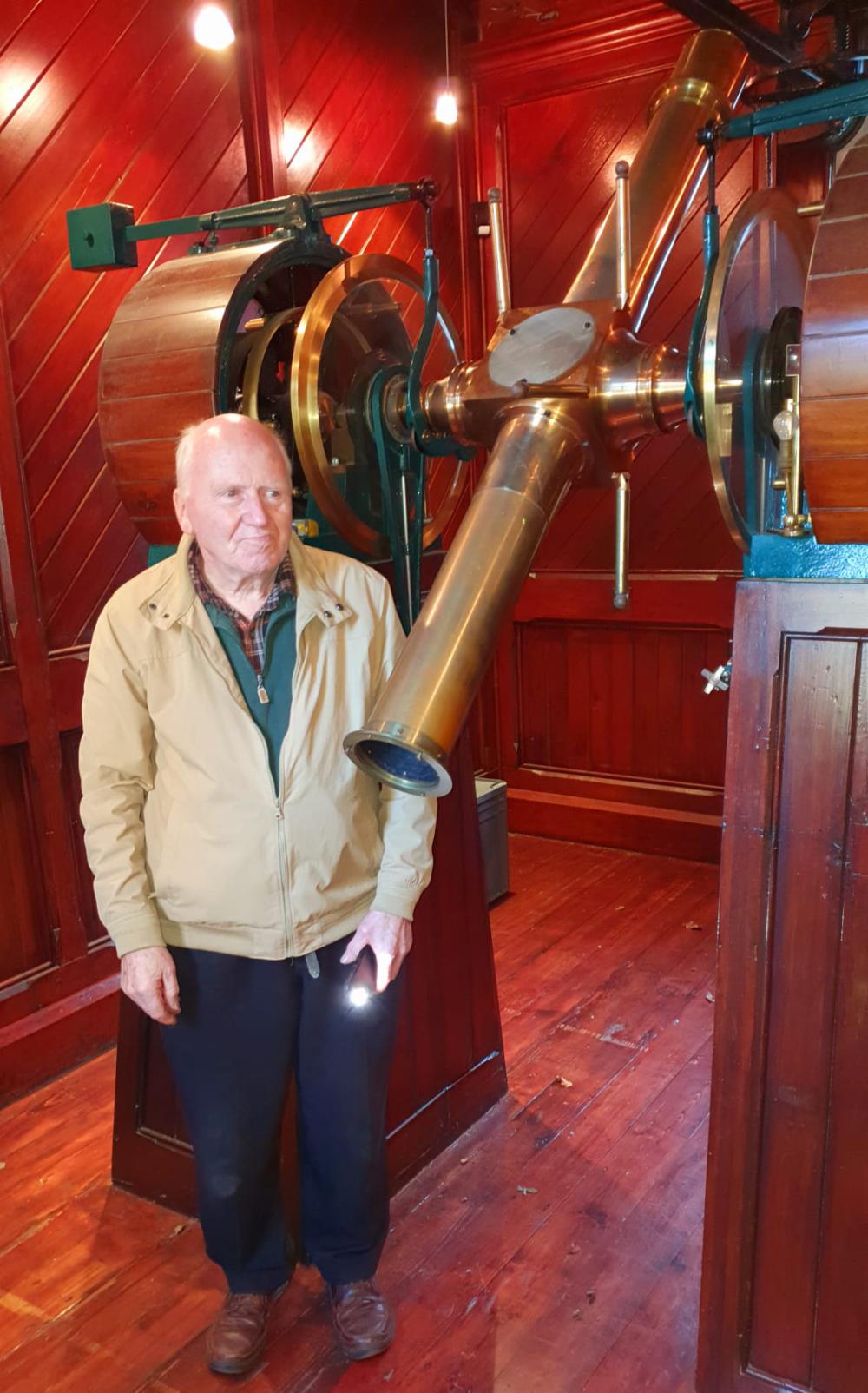 The instruments of Crawford Observatory, Cork, were restored by Bertie McClure of Belfast a couple of decades ago (he is present in some photos here).

Mostly the telescopes of the Grubb firm "were purchased by existing observatories [like Dublin and Armagh], however at Cork, Howard Grubb built a complete observatory including the telescope dome, clocks, three major astronomical instruments and their ancillary equipment. This Observatory, though small, is unique in Ireland, if not in Europe, for the remarkable state of preservation of its instruments and the original condition of its buildings" (Butler 1994).

"Howard Grubb was proud of his achievements in Cork and detailed the many improvements he first introduced there in article published by The Royal Dublin Society. Amongst the innovations he mentioned were:

It is still the University College Cork (UCC) Observatory, used for teaching students and for public outreach.

Due to the historic instrumentation, the observatory is no longer used in research.