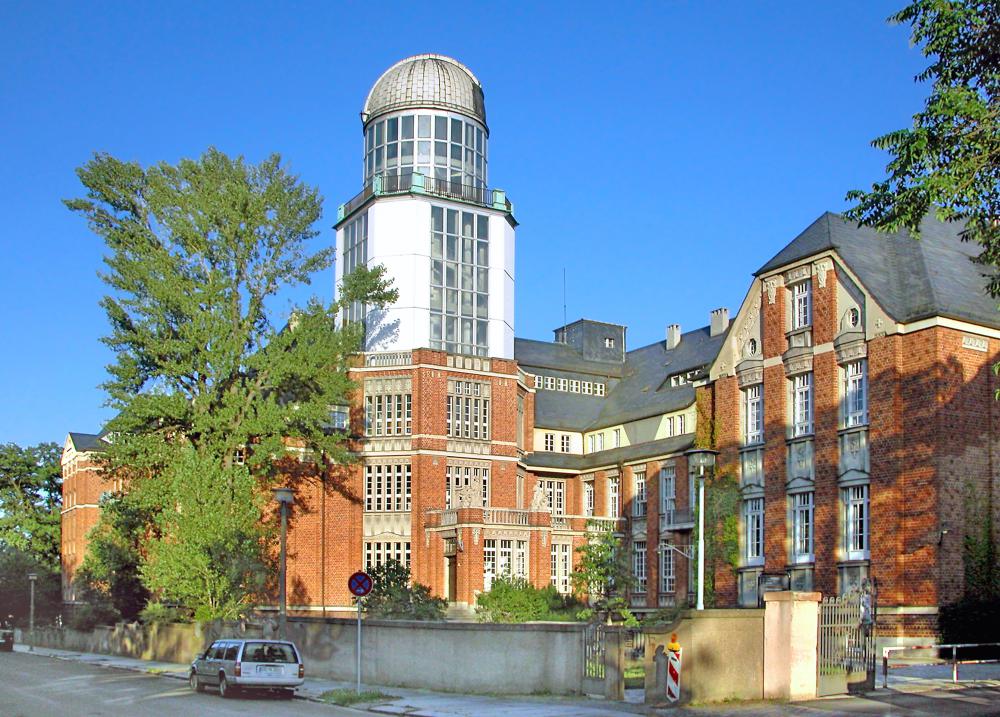 Architecture of the Lohrmann-Observatory and Beyer building, Technical University Dresden (1913)

The Lohrmann-Observatory, Technical University (TU) in Dresden, was founded in 1913, is part of the Beyer building, erected in 1910 to 1913 by Martin Dülfer (1859--1942) on the border of the campus in the south suburb (Südvorstadt). Dülfer had joined the Dresden reform movement (Hübner et al. 2005), and did not orient himself to the stylistic elements that were dominant in Dresden at that time, but oriented himself more towards northern German building traditions: Red brick, hipped roofs, flat bay windows, narrow windows with narrow pillars are typical, on the other hand there are also a few Art Nouveau elements (Bahr 2011, p. 136). "The aesthetics of the building material" and the "material justice" "demonstrate a new acquisition of form and material that was unique to Dülfer." 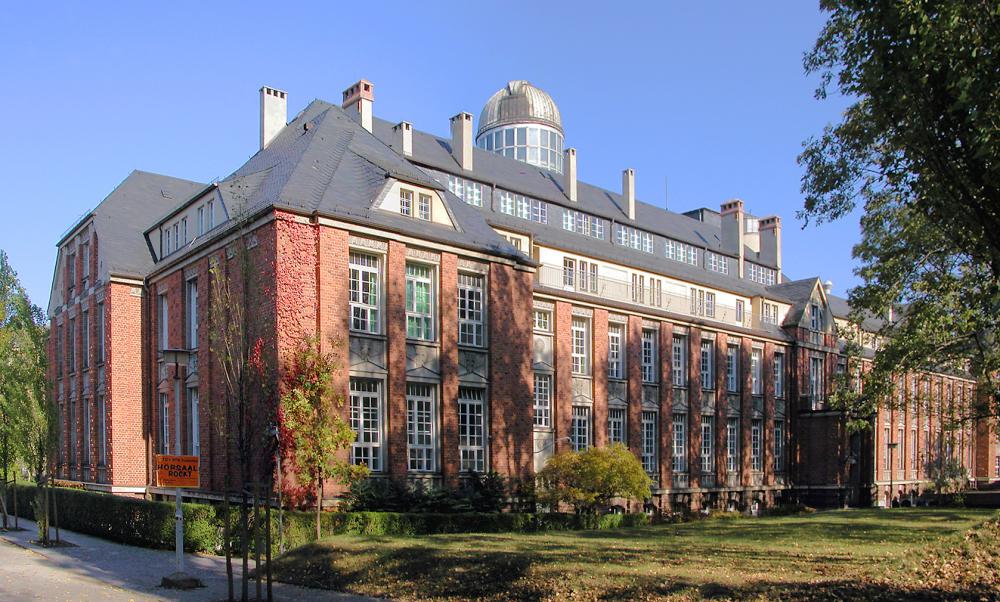 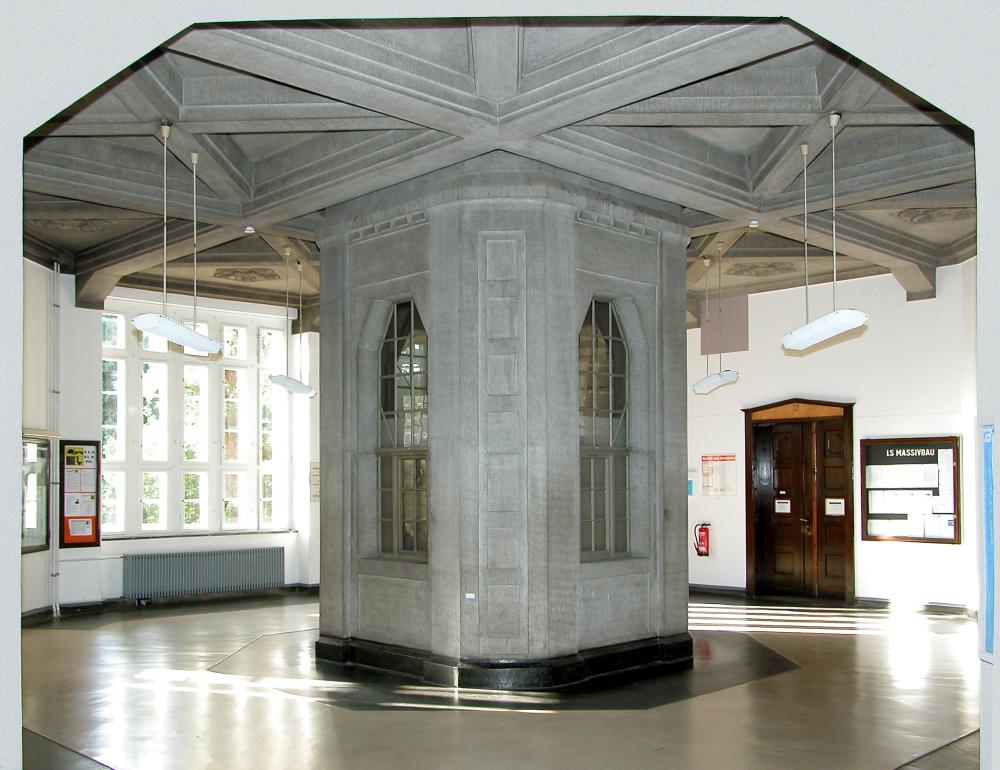 Striking in the cityscape is the observatory tower, which has a dome about 40 meters above street level; this tower is one of "the first high-rise buildings in Germany" (Hübner et al. 2005, p. 10-11) -- 10 floors. In this context, one should mention the Bau 15 (Friedrich Pützer, 1915) in Jena, which is traditionally regarded as the first high-rise building in what is now Germany, but so is sometimes the Narva Tower in Berlin-Friedrichshain, which was completed in 1909.
Dülfer structured the staggered tower of the Lohrmann Observatory on an octagonal base (a very typical feature for observatories since the Tower of the Winds in Athens), which ends at a glass roundabout with a dome above it, with many high windows that alternate with pilaster strips. On the one hand, he wanted to emphasize the verticality, on the other hand, he wanted to achieve an impression of monumentality (Bahr 2011, p. 136).

Bernhard Pattenhausen (1855--1926), professor since 1893, Rector of the TH Dresden (1907/08) and director of the Geodetic Institute, founded the Lohrmann Observatory (1913). The main instrument was the 30-cm-Heyde Refractor. The observatory tower also houses a collection of historical astronomical and geodetic instruments. 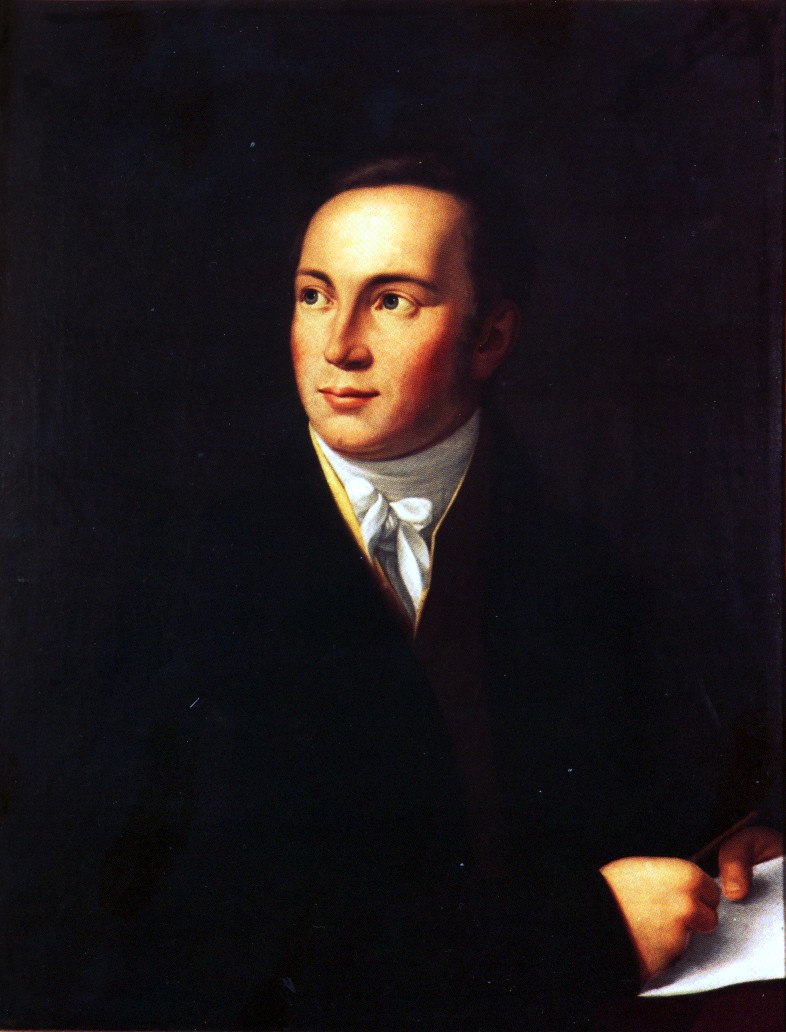 The Lohrmann Institute for Geodetic Astronomy, founded in 1961, was an institute of the Technical University (TU) in Dresden, named after the German geodesist and astronomer Wilhelm Gotthelf Lohrmann (1796--1840), which was founded in 1961. Since the institutes were abolished in 1968, it has been known as the Lohrmann Observatory and is also the professorship for astronomy at the TU Dresden. His focus is on geodetic astronomy, celestial mechanics and astrometry. 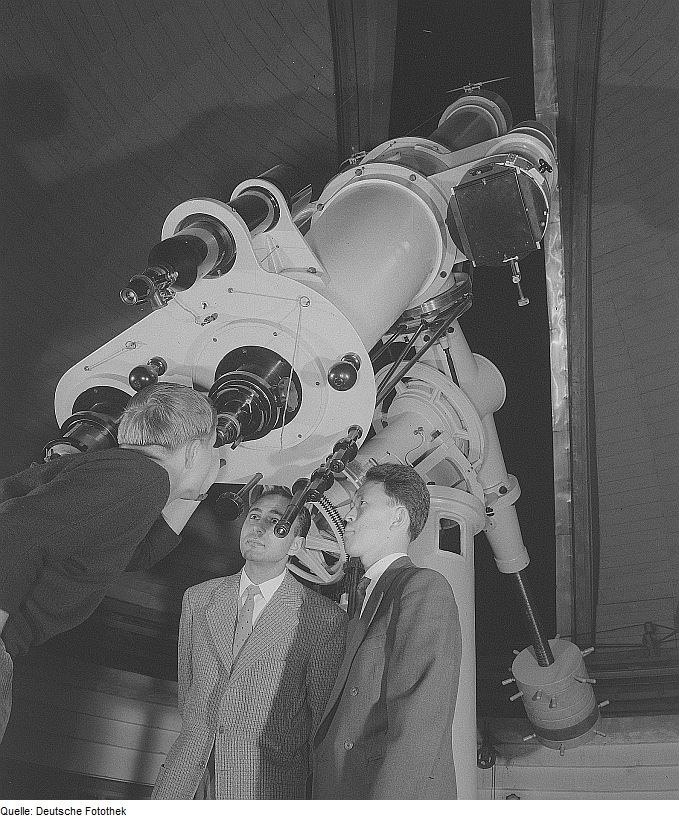 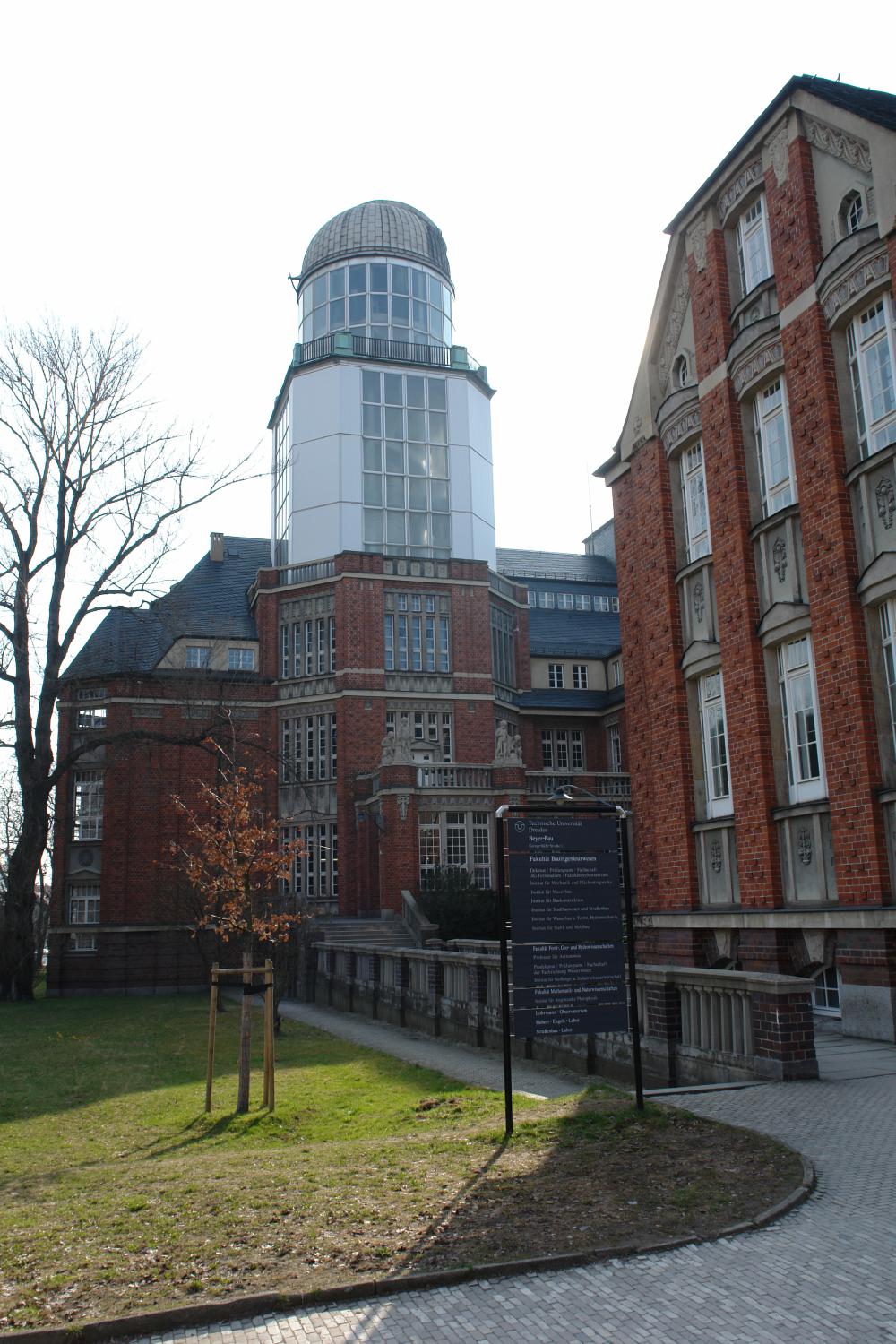 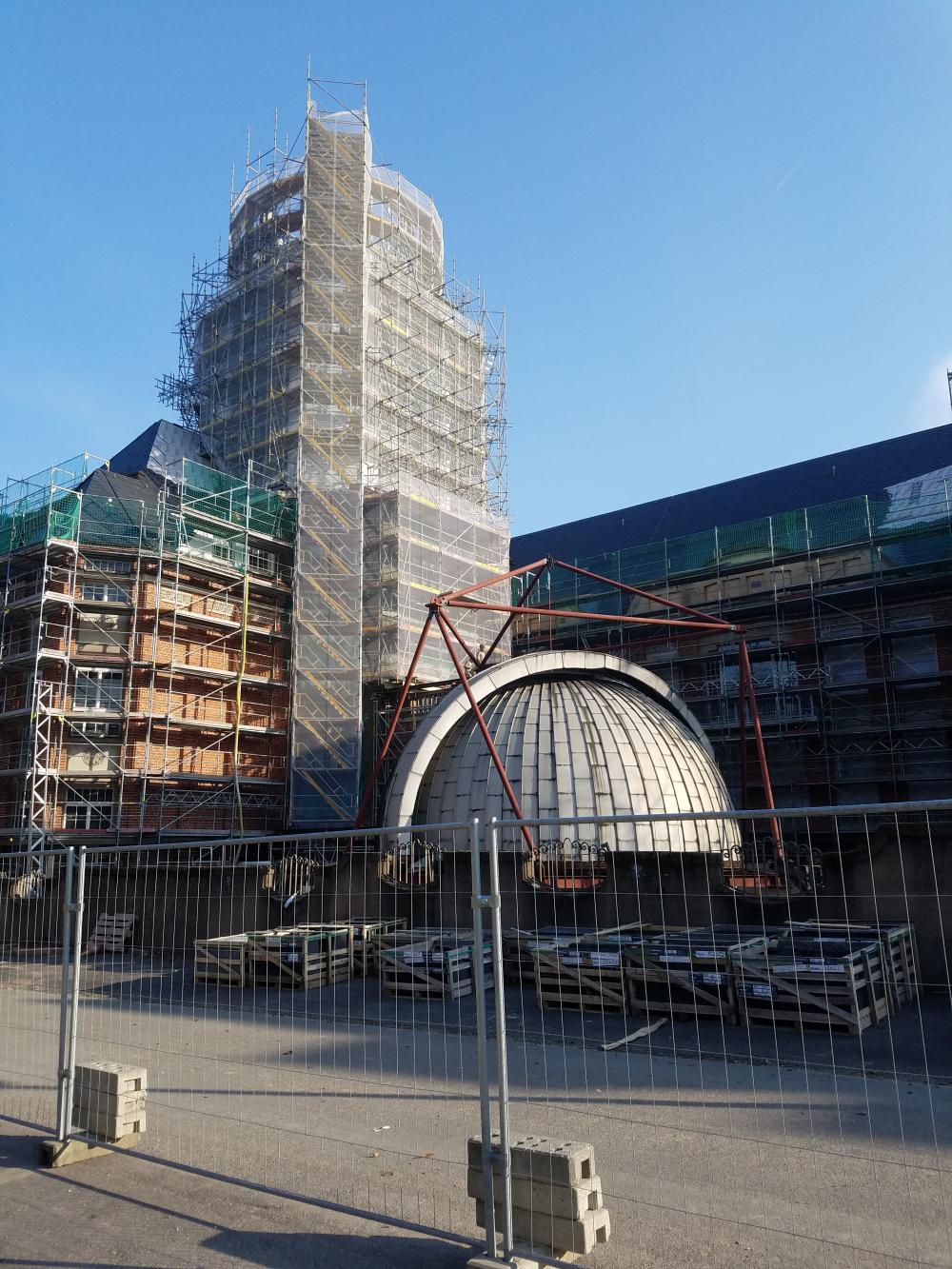 Although the attic burned out as a result of WWII, and all the wooden components of the roof truss and the cladding of the observatory tower were lost, only minor changes were made in the post-war years, so that the structure of the building has largely been preserved in its original form.

The building has been renovated since 2018, including the tower. After the historic refractor was removed in 2016 and brought to Jena for restoration, work starts now with the observatory tower. The spectacular event on March 14, 2022, was the dismantling of the observatory dome (it weighs 12 tons and has a diameter of around 8.5 meters) with a 200 ton crane. Until early 2023, the dome will be repaired on the ground; then the Beyer building is scheduled to reopen in 2024.

The Lohrmann Observatory tower with a dome about 40 meters above street level, is one of "the first high-rise buildings in Germany" (Hübner et al. 2005, p. 10-11) -- 10 floors. In this context, one should mention the Bau 15 (Friedrich Pützer, 1915) in Jena, which is traditionally regarded as the first high-rise building in what is now Germany, but so is sometimes the Narva Tower in Berlin-Friedrichshain, which was completed in 1909.

The Lohrmann-Observatory, TU Dresden, is still used for astronomy, today especially for space astrometry.
The Lohrmann Institute has has for public outreach also a planetarium.

The focus of the Lohrmann-Observatory, TU Dresden, is on geodetic astronomy, celestial mechanics, astrometry (determination of the coordinates of asteroids), and transit photometry of exoplanets.