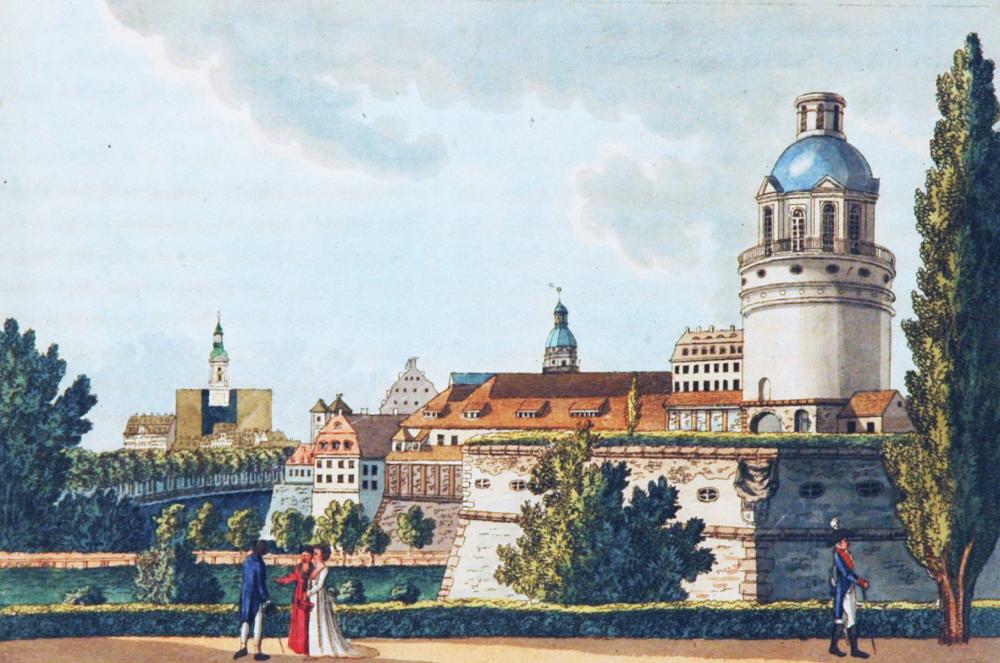 Observatory in the tower of the Pleißenburg castle, 1790 to 1861

The first efforts to create a university "observatorii mathematici" can be documented for the year 1711. However, this proposal by the Faculty of Arts was not implemented until the end of the 18th century. The first university observatory was built in 1787/1790 by converting the tower of the Pleißenburg castle according to a design by the Leipzig mathematicians Georg Heinrich Borz (1714--1799) and Carl Friedrich Hindenburg (1741--1808). The classical round building of the observatory, which was inaugurated on 3 February 1794 as the upper end of the castle tower, was designed by the architect and building director of the city of Leipzig Johann Carl Friedrich Dauthe (1746--1816). The building had been established with electoral (German: kurfürstlich) funds, and handed over to the university.

However, the foundation of the telescope pier did not meet later requirements. This first observatory was located on the tower of the medieval Pleißenburg castle until 1861. Its equipment at the time included "several excellent instruments, such as a 17-inch circle and a mirror sextant by Troughton, a pendulum clock by Wulliamy, achromats by Cary and Barge, globes." The institution received a valuable enrichment in 1803 through a generous donation by the Electoral Saxon envoy in London, Hans Count Moritz von Brühl (1736--1811), who "donated a large part of his astronomical books and instruments from two observatories he owned in England."

The instrumental equipment included a "six-foot, parallactically mounted refractor from the Optical Institute of Utzschneider and Fraunhofer" and a "Gaussian apparatus for observing magnetic declination" (1834). In 1837, the heirs of Baron von Uckermann donated to the university a "four-foot refractor from the Optical Institute in Munich, mounted on a tripod with horizontal and vertical movement". An "excellent theodolite by Repsold, which has been used especially for determining the noon line of the magnetic observatory", was acquired in 1846. In addition, in 1848, a chronometer by Kessels and "an excellent comet finder by Pistor and Martins in Berlin" were purchased. 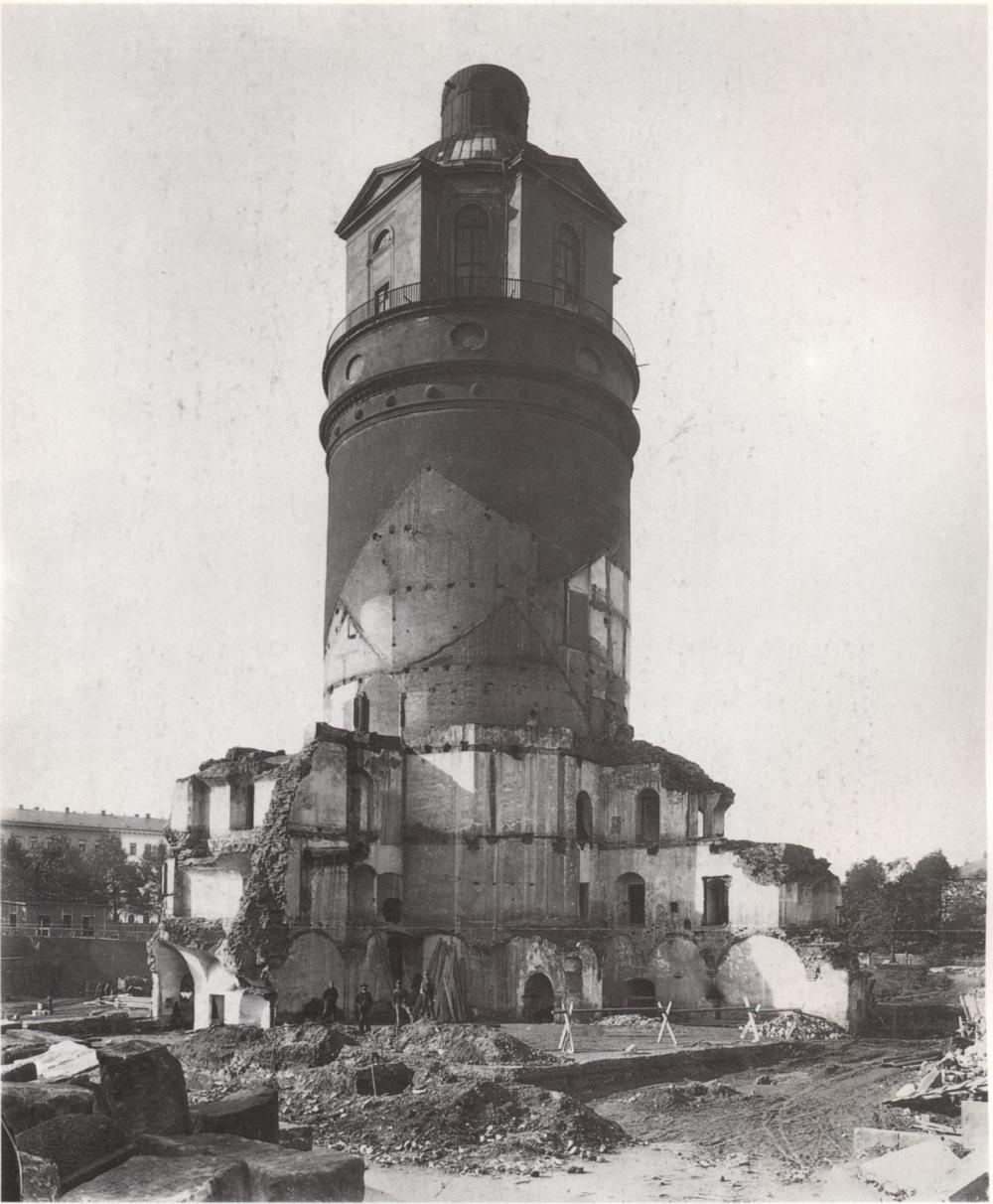 Fig. 1b. Observatory in the tower of the Pleißenburg castle (1790), demolished in 1861 (Wikipedia, CC, Hermann Walter)

In 1861, the observatory was closed after it could no longer fulfil its original purpose due to the dense building development and the new observatory in Johannistal was opened as a replacement. The Pleißenburg was demolished together with the old observatory in 1897 to make room for Leipzig’s New Town Hall. The foundations of the old castle tower were used for the construction of the new town hall tower.

A Leipzig observatory existed from 1794 as an institution of the university successively at two locations in Leipzig. 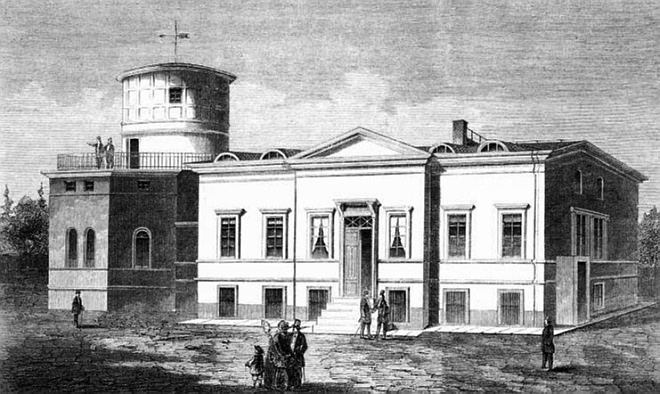 Fig. 2. New Leipzig Observatory (1861), seen from North, the director’s villa is to the right (Wikipedia, CC)

The new observatory in Johannistal, opened in the same year, when Pleissenburg was closed (1861).

There were plans for a new building as early as 1857. After the land had been made available by the city for the university on favourable terms, construction began in 1860. The new university observatory in Leipzig was built in 1860/1861 on the western edge of the Johannistal on what is now the site of Stephanstraße No. 3 and opened on 8 November 1861, designed by the architect Albert Geutebrück (1801--1868).

Geutebrück’s design was also used to build the residence for the director Karl Christian Bruhns (1830--1881), which stood directly next to the observatory, and the Meridian Room, and was connected to it via a corridor; an auditorium was integrated. The two-storey building in the classicist style with a tympanum above the central risalit was the official residence of the director of the observatory.

The observatory contained a library and the so-called "Meridian Room", which also housed a collection of astronomical instruments. Remarkable for the time was the construction of the dome, which was mounted on spheres and could be rotated in all directions. In addition, there was a telescope with a focal length of 12 feet (about 350cm) and a lens of 8-inches (about 19cm). Along the dome, a platform that could be walked on all around served to set up mobile instruments for observing the heavens. 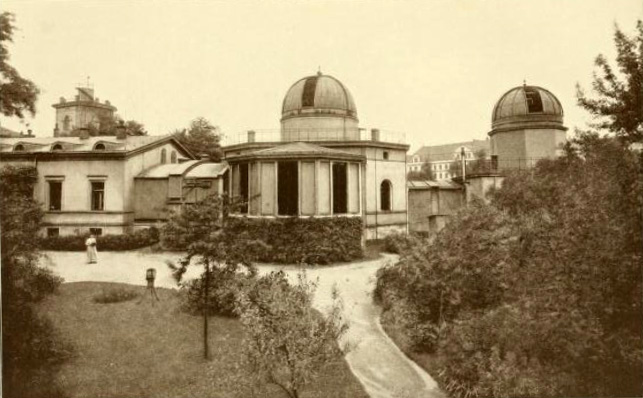 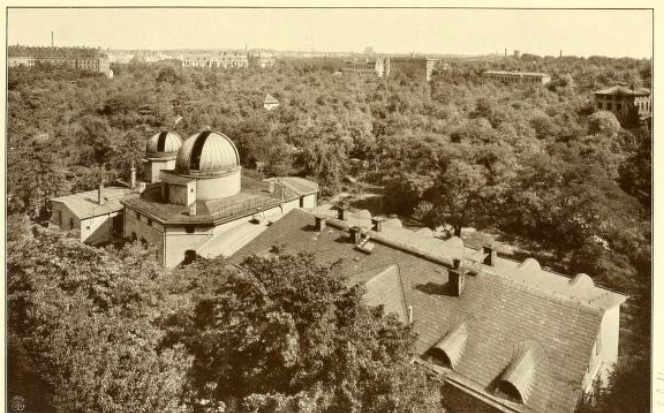 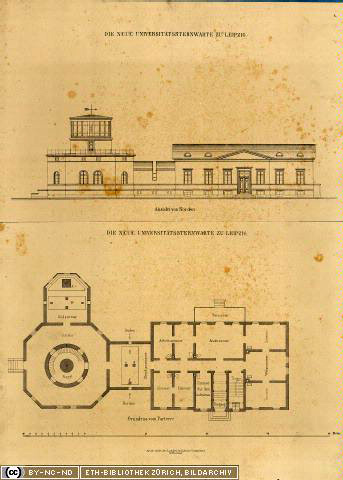 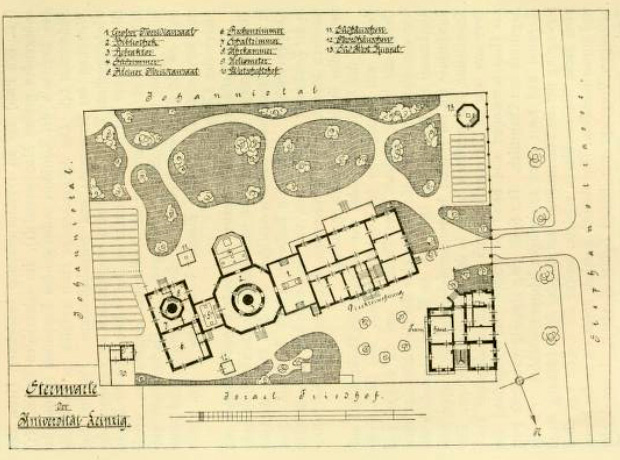 In 1866, a second dome for astrophysics was added to the facility, which was under the supervision of the Professor for Astrophysics  Karl Friedrich Zöllner (1834--1882). In addition a second meridian room, and a meteorological station were added, and in 1886, a tower. 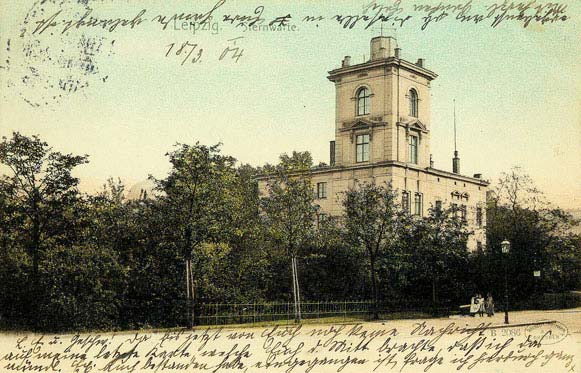 In 1881/82, the meteorological station was converted for astronomical purposes. The resulting tower house was put into operation in January 1886 and was mainly used to set up smaller instruments. As early as 1882, a clock cellar and a room for the chronographs had been created in the main building. The Meridian Hall was also renovated in 1893.

The Leipzig Observatory in Johannistal continued to operate on a makeshift basis after being partially destroyed in the heavy air raid of 4 December 1943, but was finally closed in 1956. 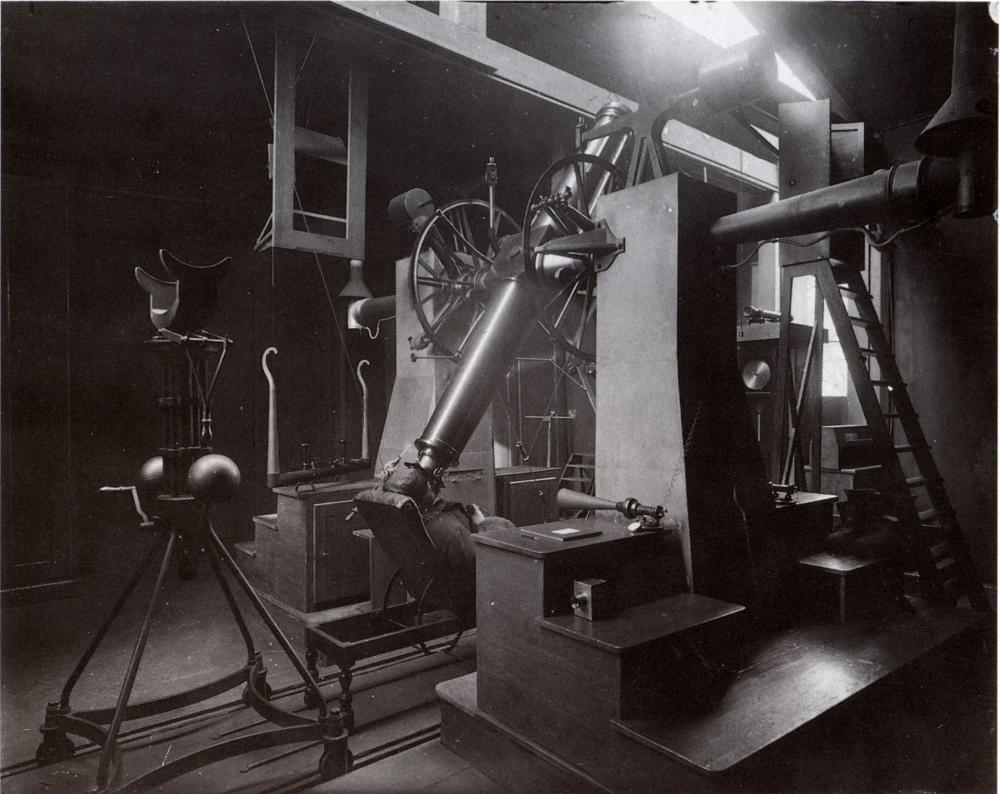 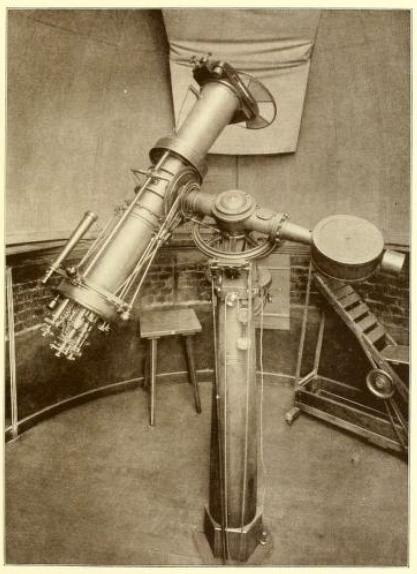 Instruments of the old and new Observatory Leipzig 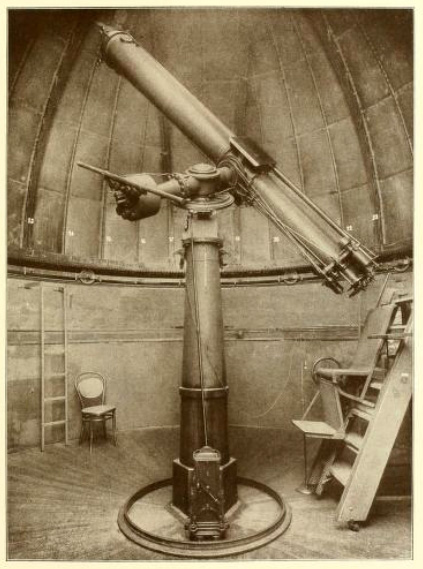 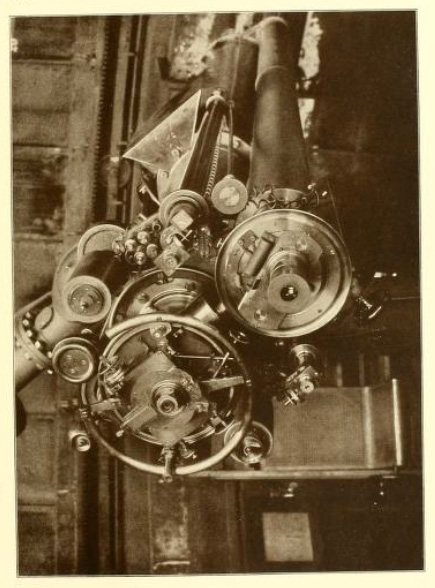 Fig. 5b. Ocular of the Large Refractor of Leipzig Observatory (Bruns 1909, VI) 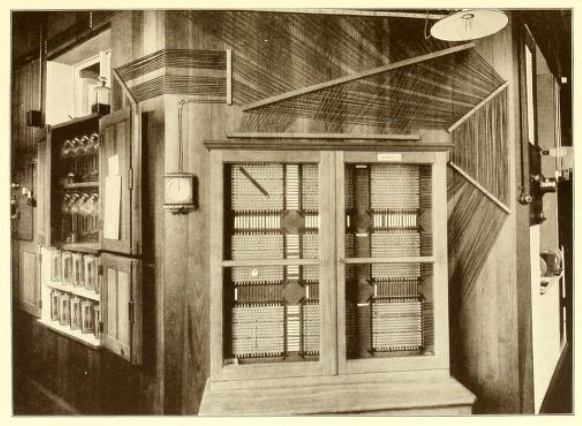 Observers or Directors of the Leipzig Observatories 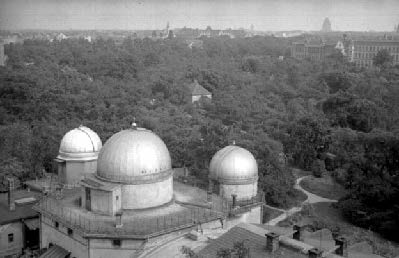 Starting of Astrophysics in Leipzig University

In 1866, a second dome for astrophysics was added to Leipzig Observatory, which was under the supervision of the Professor for Astrophysics Karl Friedrich Zöllner (1834--1882). He developed the later widespread Zöllner photometer, a compaison photometer. He also introduced the term "astrophysics" in 1861 (Wolfschmidt 1997), including photometry, spectroscopy, photography, and solar physics. 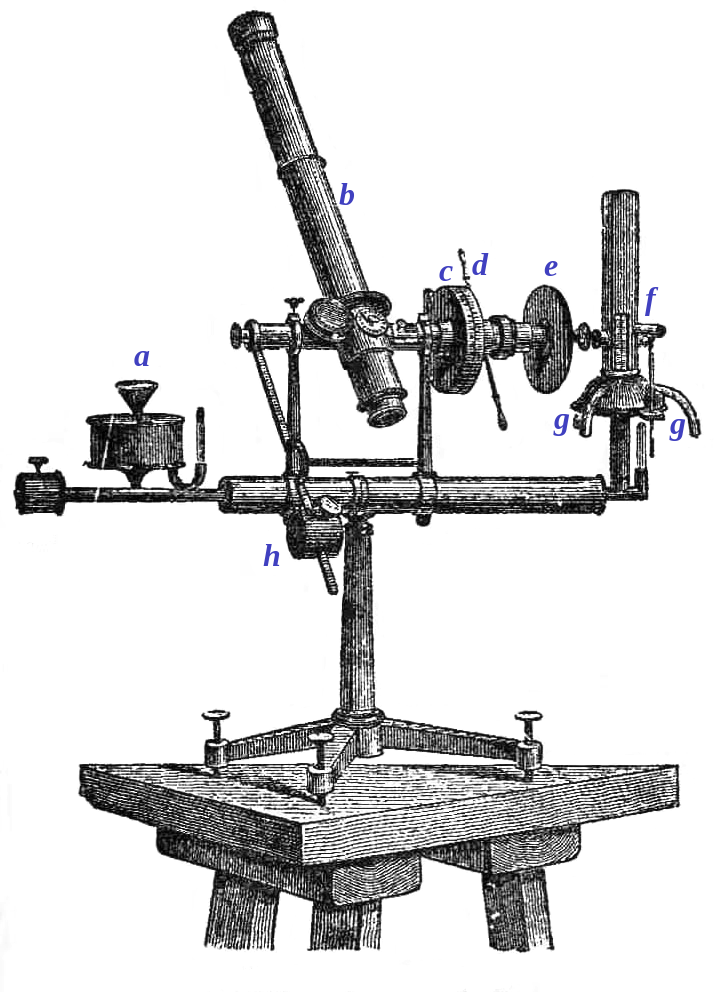 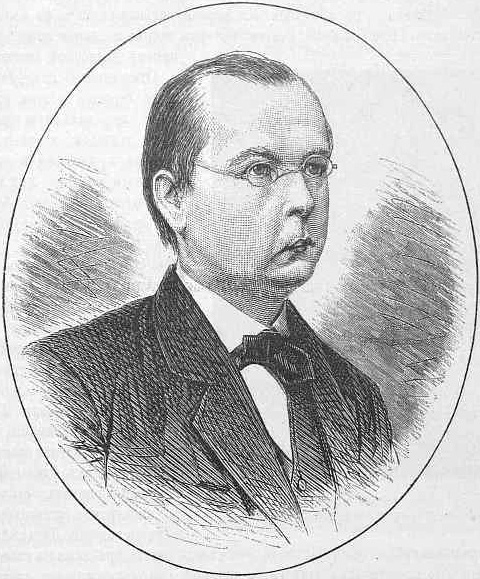 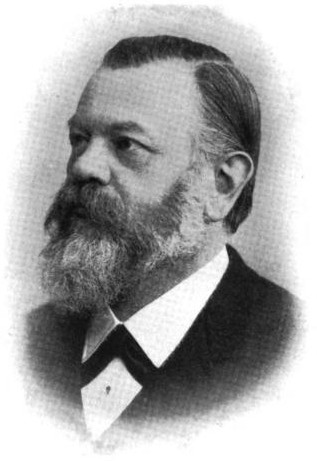 The Leipzig Observatory was considerably destroyed in WWII in the heavy air raid of 4 December 1943. In 1956, it had to cease operations completely.
Since 1993, the reconstructed remnant of the observatory building houses the Institute of Meteorology of the Faculty of Physics and Earth Sciences at Leipzig University.

The new observatory Leipzig (1861) had an octagonal building with the observing tower on the top like e.g. Oxford, UK, or Halle / Saale, and many others.

The Leipzig Observatory was destroyed in WWII in 1943.

The Leipzig Observatory is no longer existing.
A street in Leipzig’s south-eastern suburb (Sternwartenstraße) was named after the new observatory in 1864 and an alleyway in Johannistal (Sternwartenweg) in 1917.

The Leipzig Observatory is no longer existing.

Today there is no astronomical observatory or planetarium in Leipzig. The large planetarium with a Zeiss Modell II, opened in Leipzig Zoo, Pfaffendorfer-Strasse, in May 1926, was also destroyed by bombs. A new small planetarium in the Zoo with a projector Zeiss ZKP 2P, which existed from 1992 to 1996, had to cease operation due to a lack of audience response and summer temperature problems in the dome.

Until about 2002, there was an observatory next to the Bethanienkirche in Schleußig, used by the adult education centre and the Johannes Kepler Gymnasium.

After its closure and the sale of the property at Stieglitzstraße 40 by the city of Leipzig, the two nearest facilities of this kind are the "Juri Gagarin" Eilenburg Observatory, opened in 1965, and the "Schkeuditz Astronomical Centre", which has existed since 1978. Together they form the Nordsachsen Observatory.