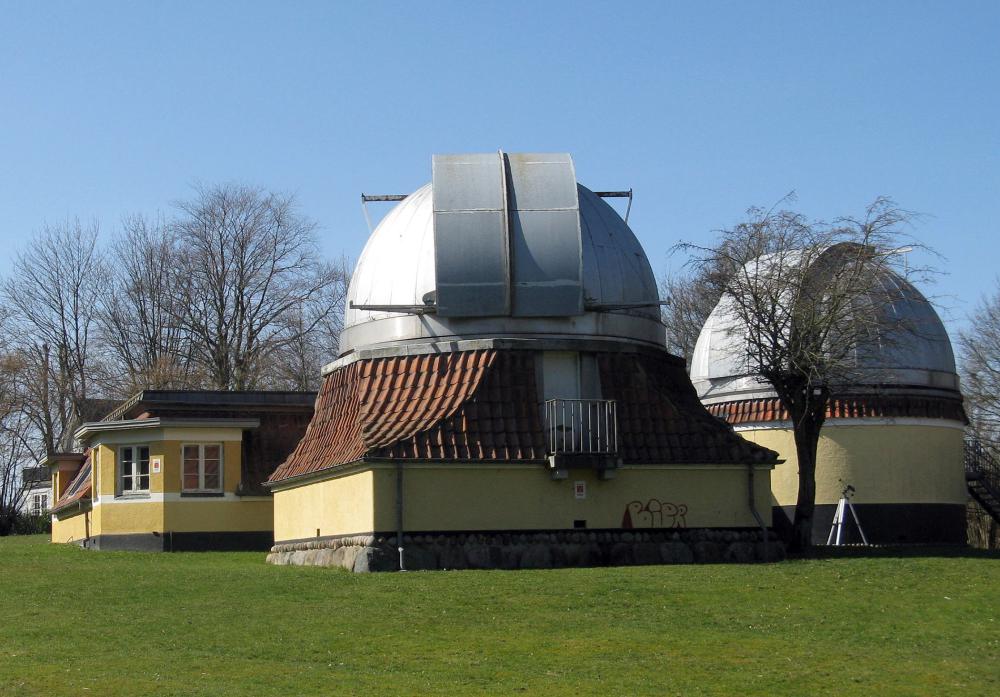 The German astronomer Friedrich Krüger (1864--1916), born in Mecklenburg, had a private observatory in Altenburg in Thuringia. Due to the poor observing conditions, he wanted to move his astronomical observatory to Aarhus; in 1908 Krüger wanted to donate his instruments (a comet finder, an iron observation dome) and a library of astronomical works for a new observatory to the municipality of Aarhus.

The Ole Rømer Observatory, named after Ole Rømer from Aarhus, is located on the hill above Marselisborg Castle. It consists of an observatory building, a central house with a office, workshop and seminar room, in the basement a photographic darkroom and the pendulum clock and devices for timekeeping, and a large director’s villa, everything designed and constructed by the architect Anton Sophus Rosen (1859--1928) in 1909--1911. The architect was inspired by Brahe’s observatory Stjerneborg on Hven. The entire Aarhus Observatory building is oriented according to the four cardinal points, with the zinc-coated domes to the north and east of the central hall. The exterior architecture shows the Arts and Crafts style (Art Nouveau), with a base of rough stone in two sizes, under plastered walls and a mansard-type tile roof. The director’s residence, the villa, located to the north of the observatory, has an irregular appearance, with a front dormer, its hipped roof, roof terraces, side dormers with a bay window and a porch. The building is plastered and has a characteristic tiled roof. 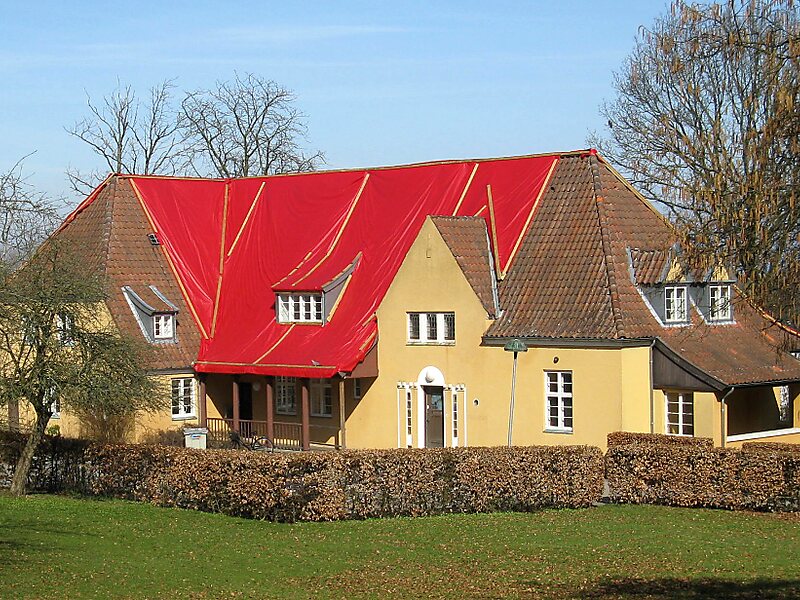 Krüger became first director of the Aarhus Observatory and lived in his villa. After the defeat to the Germans in 1864, large parts of the Danish population was not friendly to Germans. The observatory was referred to as "a German observation tower" for observing the  ships in the Bay of Aarhus. He was also accused to be a spy, especially in World War I. In December 1915 Krüger contracted typhus and died already in January 1916.

After Krüger’s death, the observatory was led by Ruben Andersen until his death in 1955. Research really started with the young assistant Axel Vilfred Nielsen (1902--1970) in 1927, after he got his master of science in 1926. During a solar eclipse in 1936, Nielsen discovered a new star, which was, unfortunately, named after a Russian astronomer who discovered the same star shortly after Nielsen. In 1946 he was promoted to "observing astronomer". A crater on the moon was named after him in 1974.

In 1956 Aarhus University took over the observatory. The Copenhagen astronomer Mogens Rudkjøbing became professor and director of the new astronomical institute.

Between the years 1981 to 1994, the Science History Museum was in Krüger’s villa until the Steno Museum was inaugurated in 1994. In 2012, the villa was changed into a guest house with four apartments, named after the astronomers Aristotle, Tycho Brahe, Copernicus and Kepler. 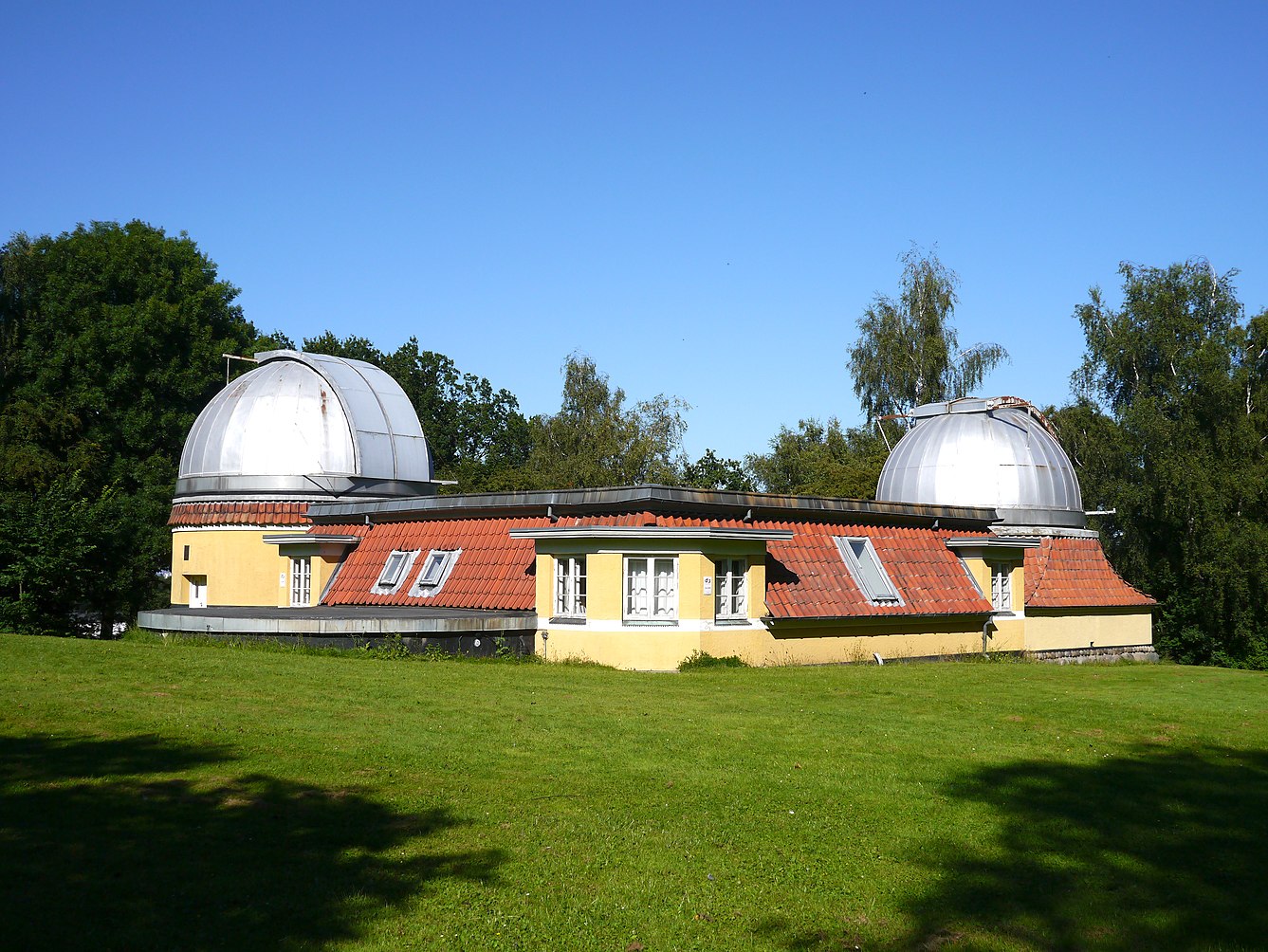 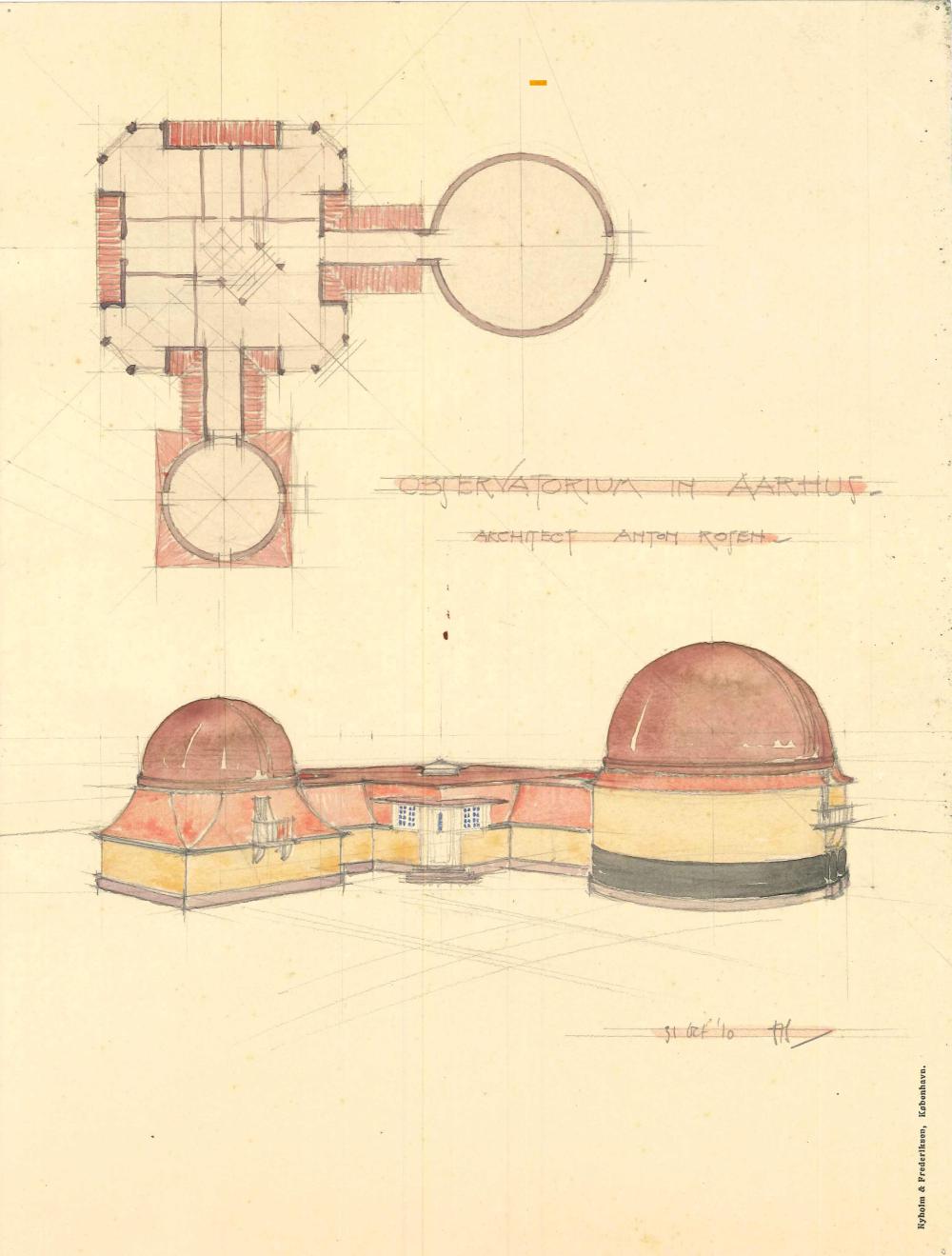 Drawings for the observatory building from 1911 (Sketch collection, Norwegian School of Architecture)

The buildings of the Ole Rømer Observatory were listed in 2006 as a good example of Danish Art Nouveau architecture.

Restoration: The Ole Rømer Observatory receives in 2022 support from the Salling Foundation with DKK 2 million. DKK, the Nordea Foundation with DKK 2 million. and Kongelunden Aarhus with DKK 1 million. The project has previously received support from the Aage and Johanne Louis-Hansen Foundation and Realdania as well as Aarhus University. Thus, the restoration and development of the Ole Rømer Observatory as a new science platform in Aarhus is now fully funded.

The Ole Rømer Observatory in Aarhus is still in astronomical use.

The Ole Rømer Observatory in Aarhus is used for research, teaching / education, and public outreach.