The idea of setting up a meteorological observatory in Hong Kong was first proposed by the Royal Society in 1879, especially <i>’favourably situated for the study of meteorology in general and typhoons in particular’</i>. The Hong Kong Observatory was established in 1883 on the Island by Sir George Bowen, the 9th Governor of Hong Kong, with William Doberck (1852--1941) as its first director.
Doberck had a conflict with the Jesuit fathers leading to the construction of other observatories in Asia; these Jesuits include Marc Dechevrens of the Shanghai Observatory and Federico Faura of the Manila Observatory. 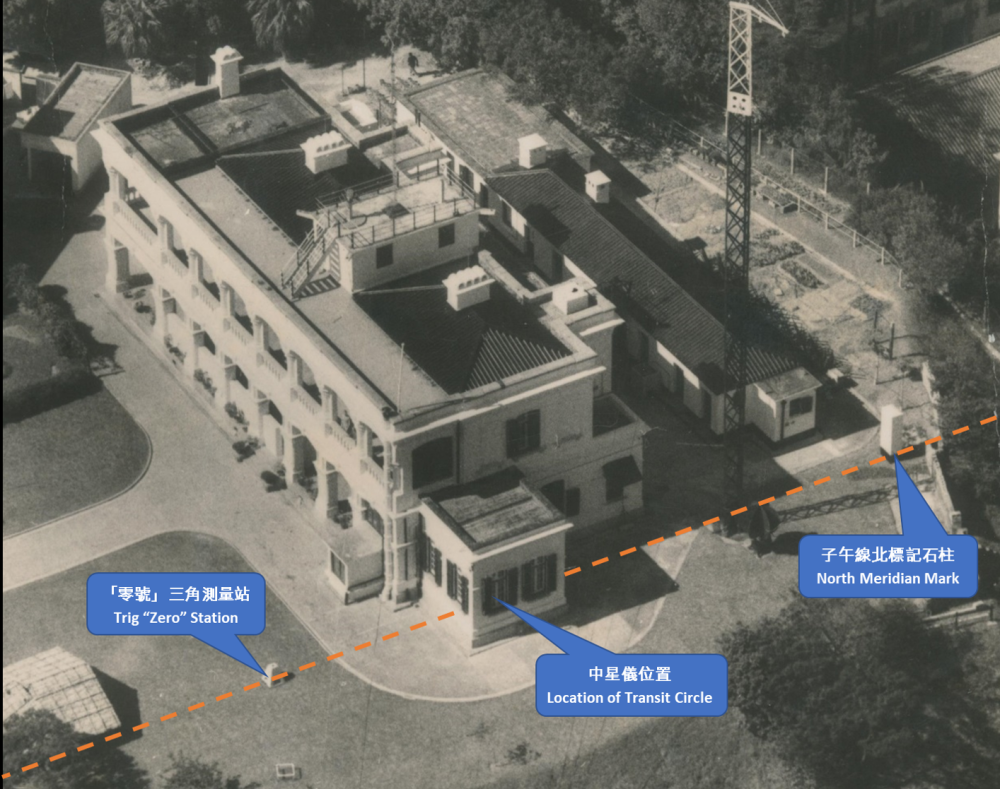 The Hong Kong Observatory, a rectangular two-storey plastered brick structure with arched windows and long verandas, was built in Tsim Sha Tsui (Observatory Road), Kowloon, in 1883. Next to the historical 1883 building; the "Centenary Building" was erected in 1983.
It was called Royal Observatory Hong Kong from 1912 to 1997 (date of transfer of Hong Kong’s sovereignty from the UK to China).

In addition to meteorological observations, also astronomical (for time service) and magnetic observations were made. Especially a tropical cyclone warning service was very important. The tropical cyclones were indicated by a typhoon gun already in 1884. This gun was placed in front of the Police Barracks at Tsim Sha Tsui facing Victoria Harbour.

Fig. 3. Nautical chart (1887) with  Observatory in Kowloon (Transit Instrument, Equatorial, and Magnetic) and Victoria Harbour on the opposite site on the Island (HKO, credit Mr. Shun Chi-ming)

In 1885, Hong Kong Observatory started the time keeping with a 6-inch-Refractor on a equatorial mount and a 3-inch-Transit Circle.

The time was announced to the mariners in the Victoria Harbour on the opposite site, but also to the general public, by dropping a 6-feet diameter Time Ball at 13:00 daily in front the Marine Police Headquarters Compound (1885). In 1908, the Time Ball was relocated to the hill of Blackhead Point due to a better visibility. The end of the time ball came in 1933, after radio broadcast and Radio Hong Kong since 1922 were available. In 1966, the pendulum clock was replaced by a crystal oscillator timing system, and the time was broadcasted with a 6-pip time signal on 95 MHz until 16 September 1989. In 1980, a Caesium beam atomic clock was introduced (accuracy  less than 1 millisecond). 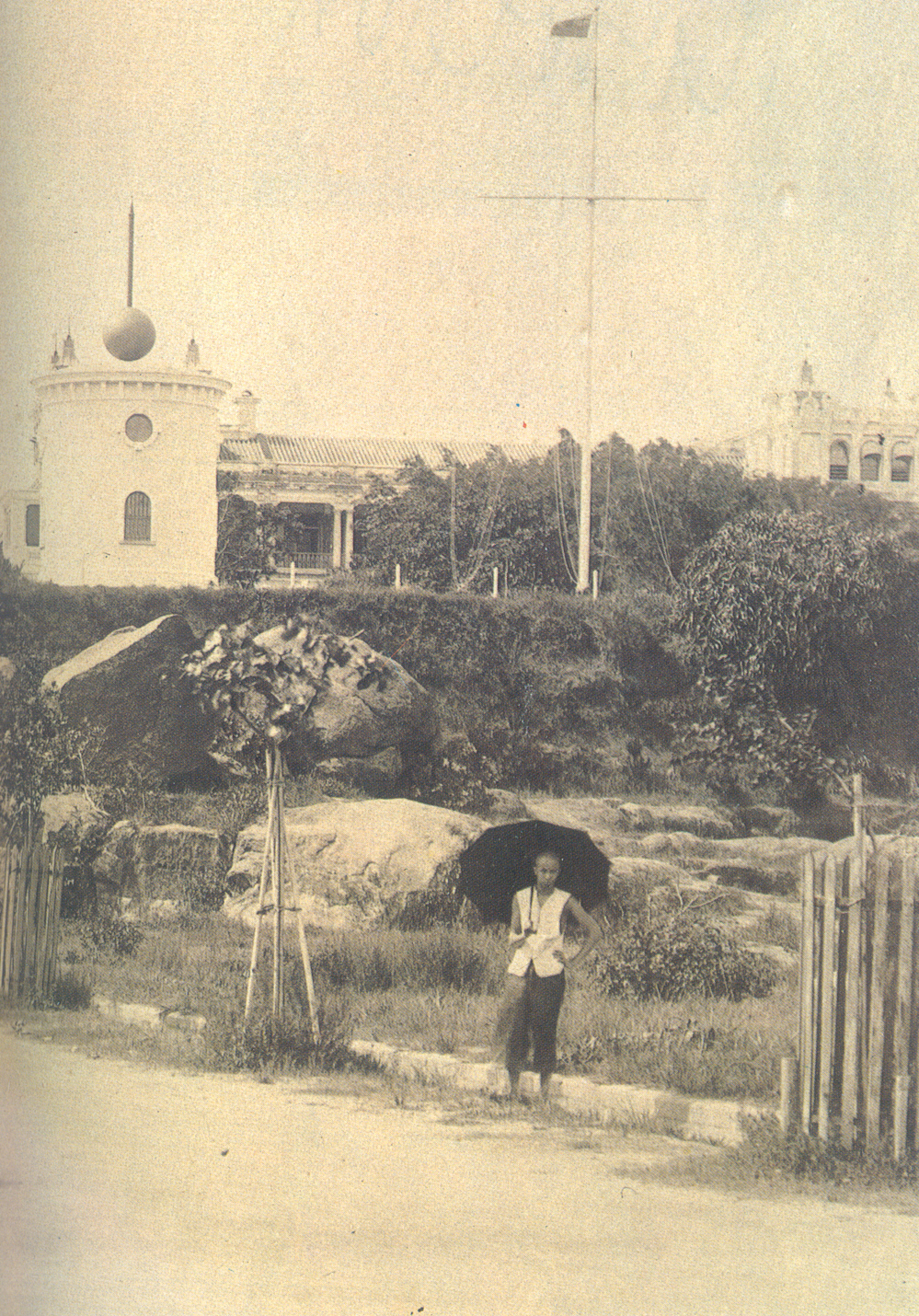 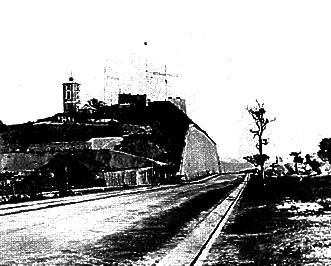 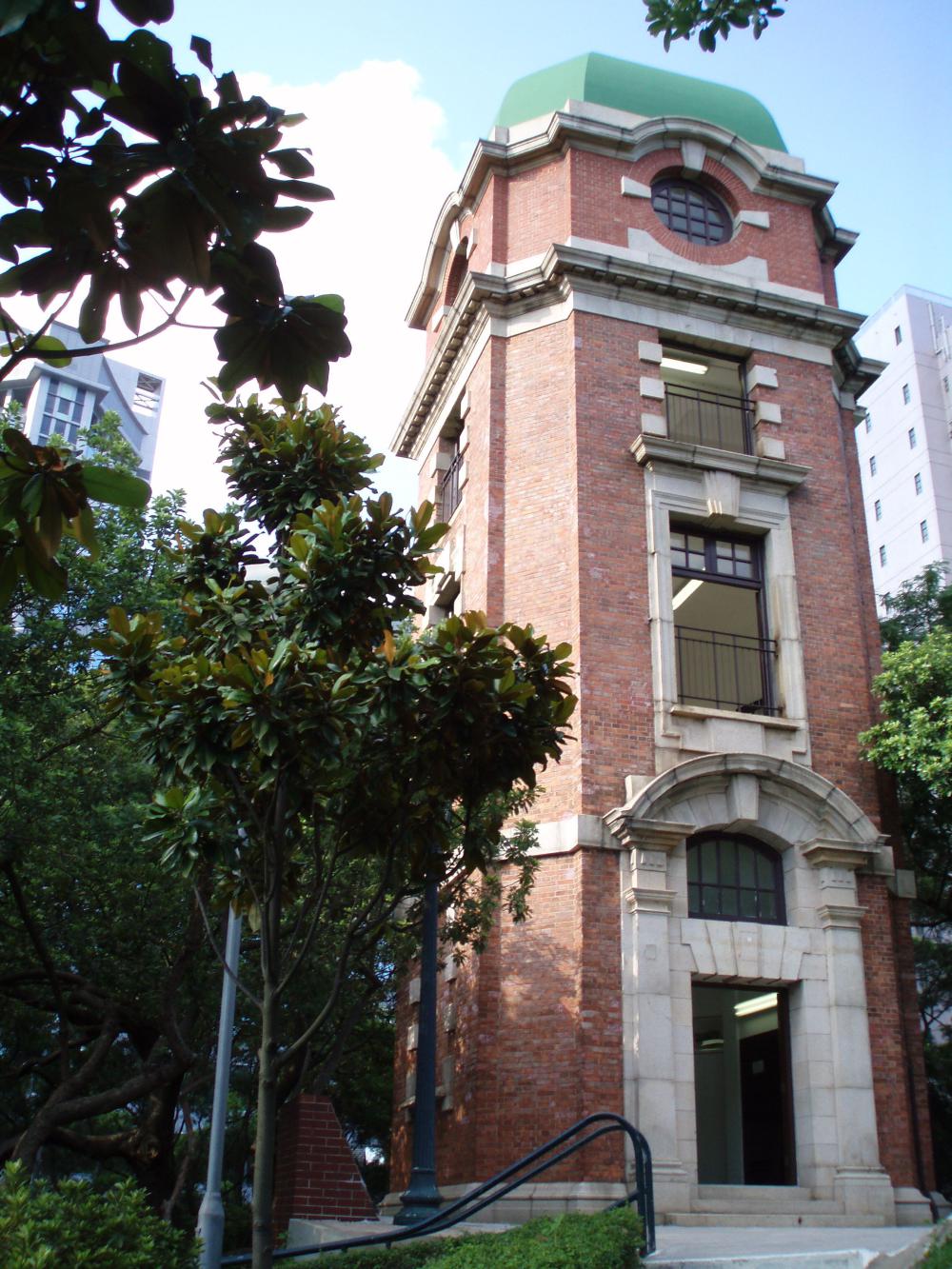 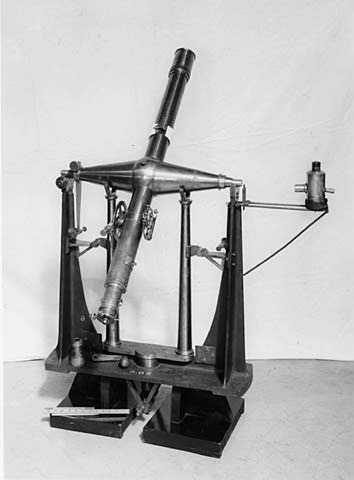 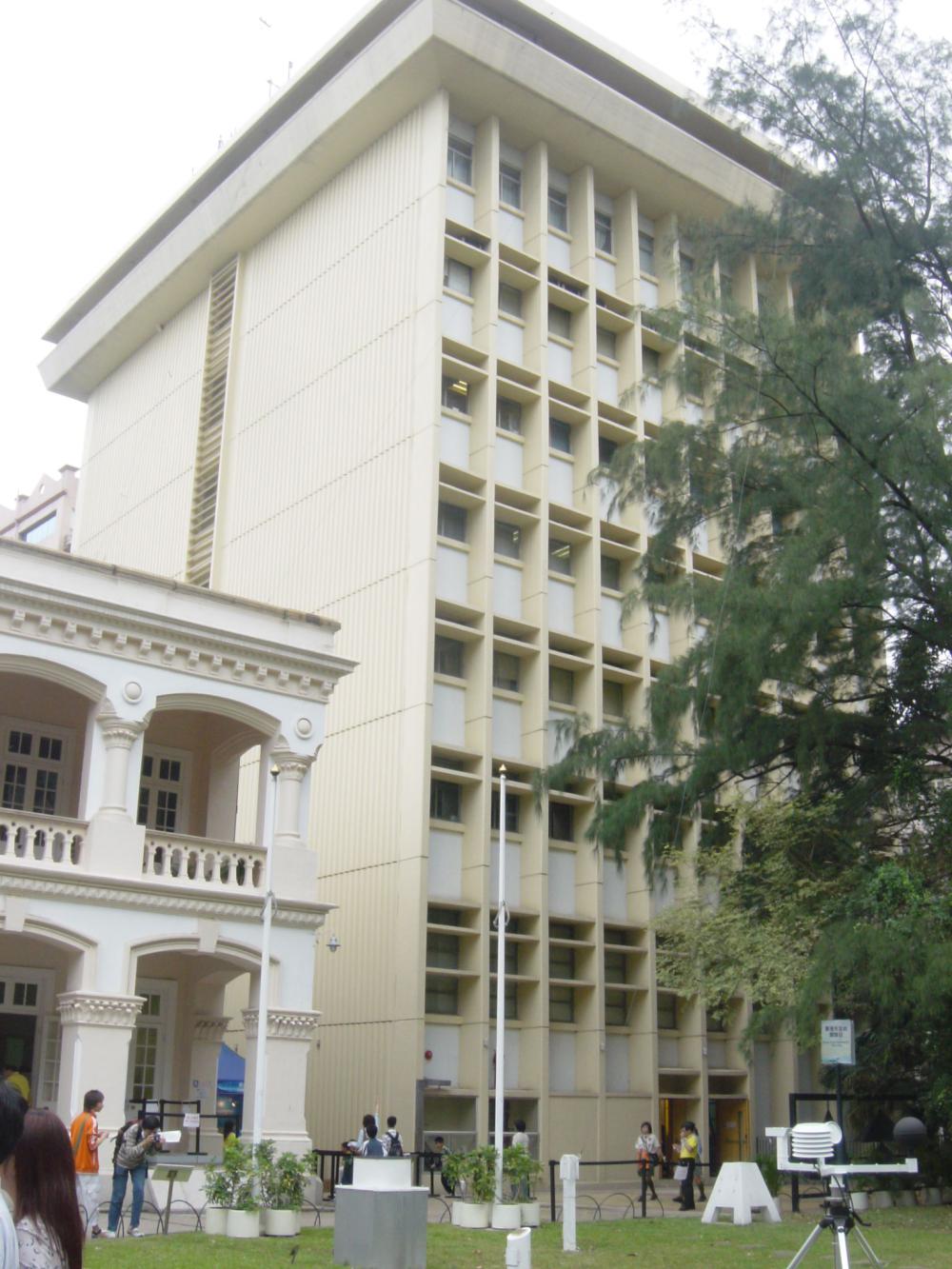 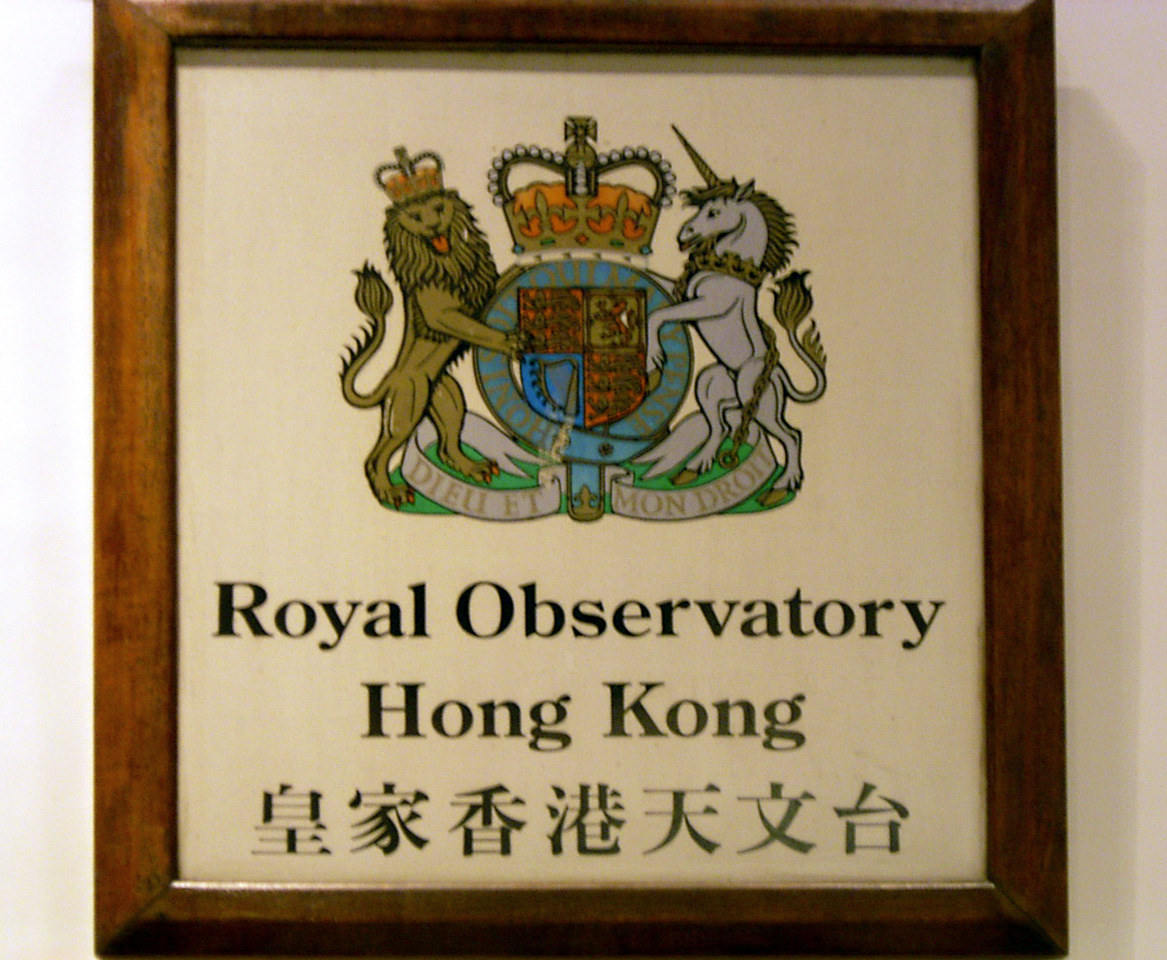 The Hong Kong Observatory building is a declared monument of Hong Kong since 1984.

No astronomical relevance today, but important in the field of meteorology and typhoon predictions.