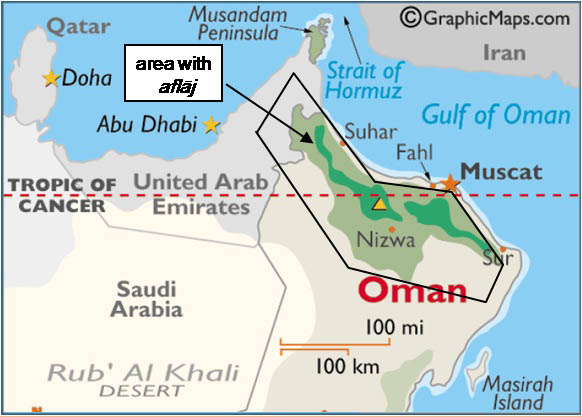 Fig. 1. Area of Oman with aflāj. Base map from worldatlas. Reproduced by permission.

Fig. 1 shows the rough outline of the area in which the sun and stars were (and in some cases still are) used for timing irrigation water. This includes the five areas listed in the nomination file for the Aflāj Irrigation Systems of Oman World Heritage Site. Villages where detailed information has been collected and stars used identified are shown in Fig. 2. 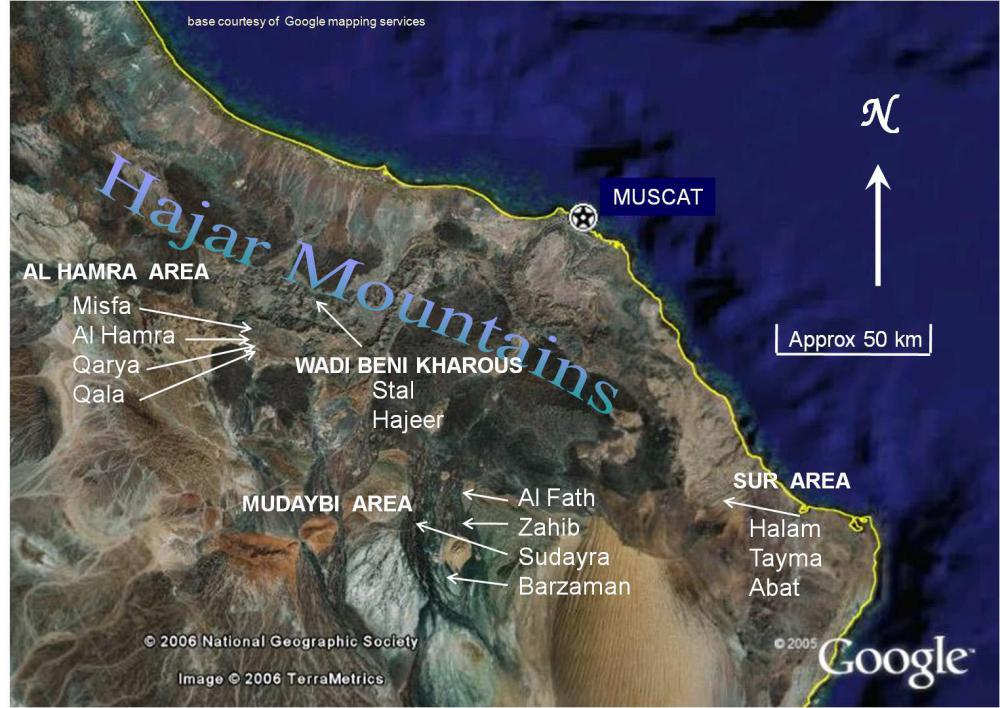 Fig. 2. Settlements where the current and past use of stars for timing irrigation water has been studied.

Description of the property

The core intangible heritage is a practice (or, rather, a set of practices) of using the sun or stars to tell the time for the division of water shares from traditional irrigation systems called aflāj (the singular is falaj).

The property comprises material attributes linked to these practices. Such material can be classified into three main types:

For (2) and (3), see the location maps and Table 1. In all the settlements listed in the Table, the great majority of stars used or formerly used have been identified. In each case, the use of the sundial either continues or stopped at the same time as the use of stars. In many other villages in Oman, the sundial is still used even though people stopped using stars around 1970.

Table 1: Settlements where the use of stars in timing water shares has been documented in detail.

Examples follow from a selection of those villages studied in some detail. There are many more with sundials. 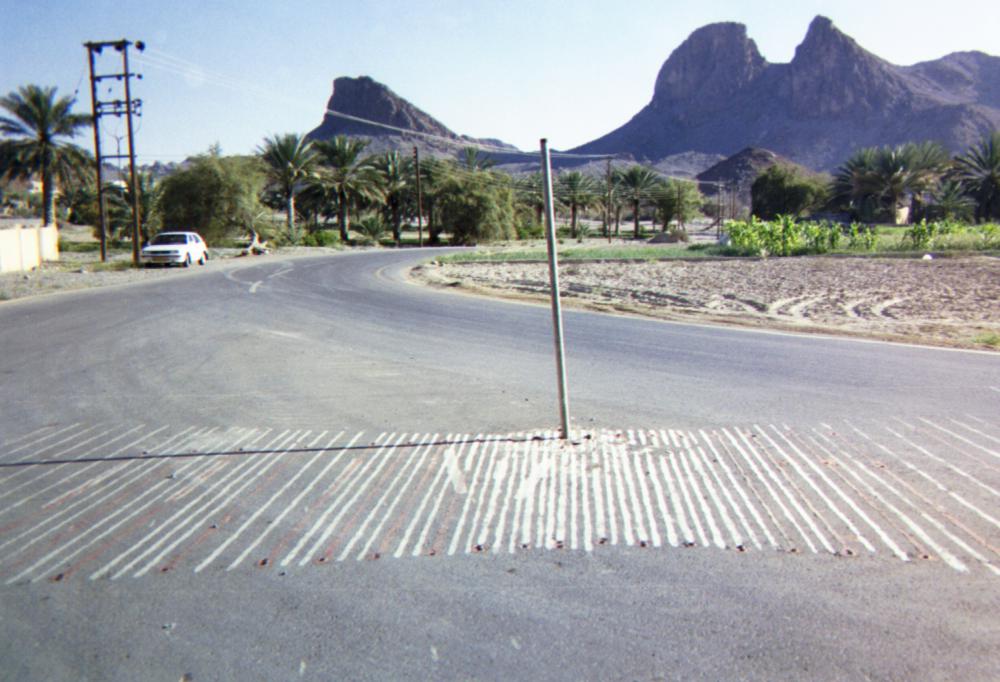 Fig. 4. Horizon for watching stars in Qarya Beni Subh from one of the three official observing locations. Photograph: Harriet Nash

Between the main falaj stars Vega (α Lyrae) and Deneb (α Cygni), there are three athars with four official dividers (i.e. stars named as dividers) and one unofficial divider, none of which coincides with the athar divisions. It is not known why these particular stars were selected: possibly there are no alternative easily recognised stars visible from the observation point; possibly the selection was based on actual divisions of water ownership, which may not coincide with athar divisions. This serves to illustrate just how many stars must be known and that the system will only survive as long as the official stargazer remains to resolve any disputes among farmers. 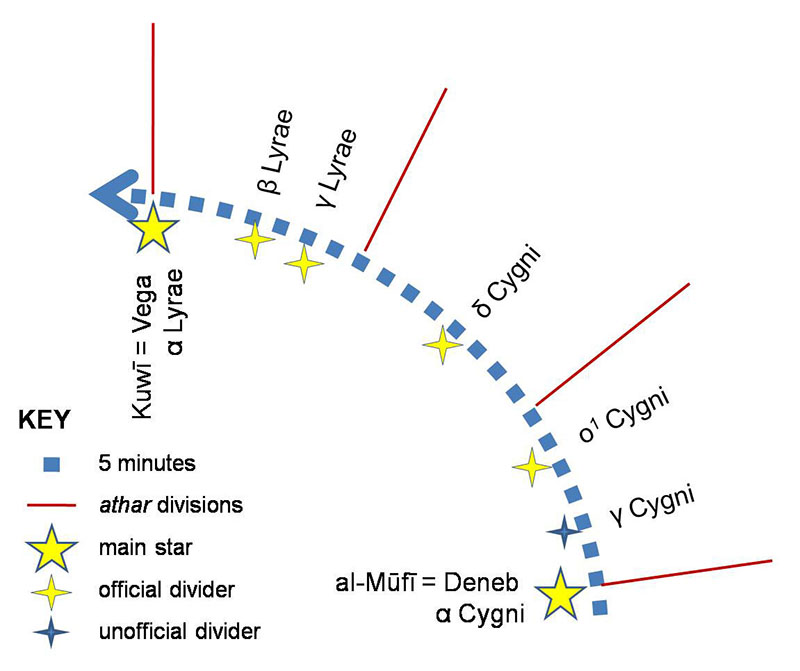 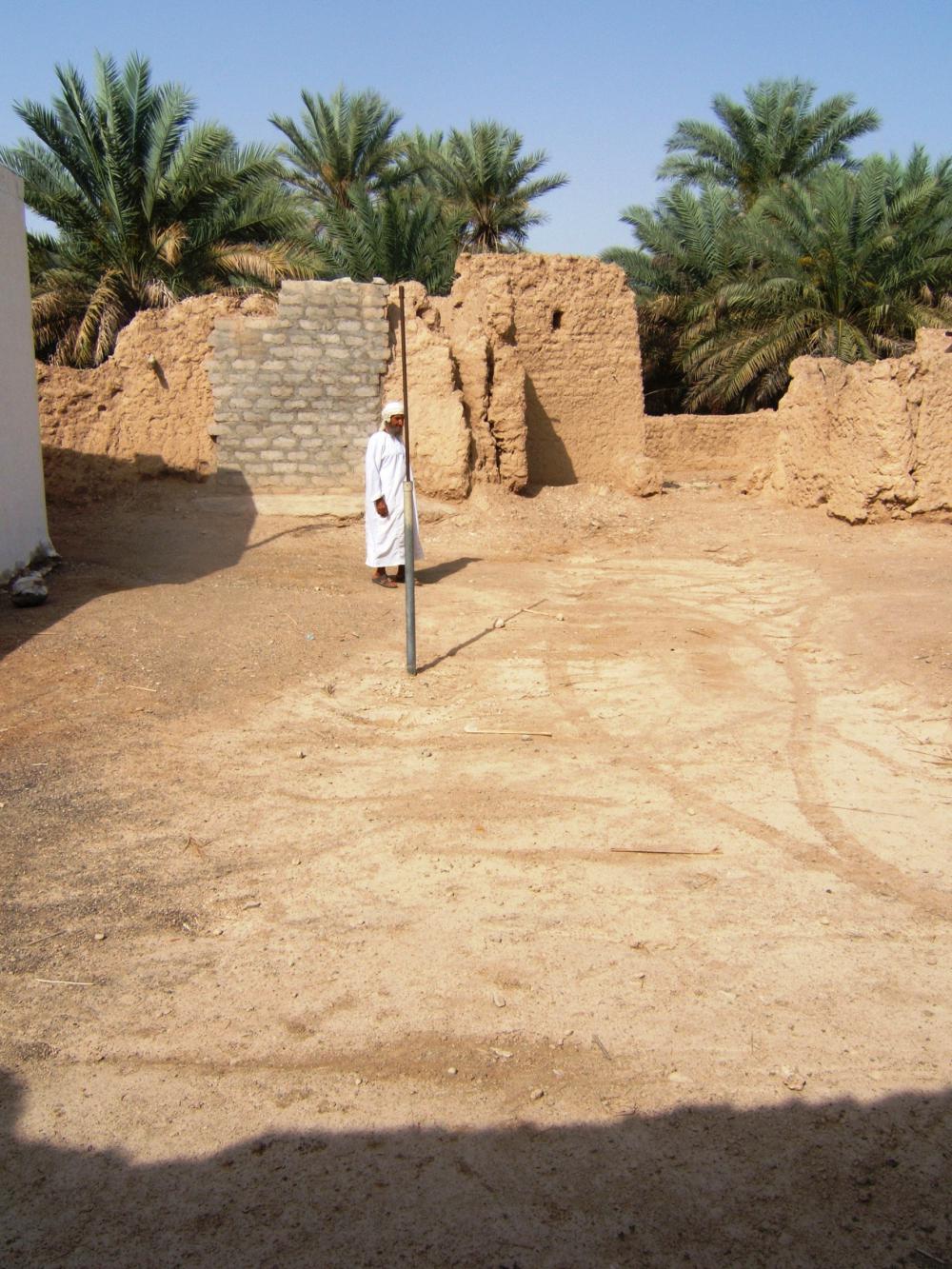 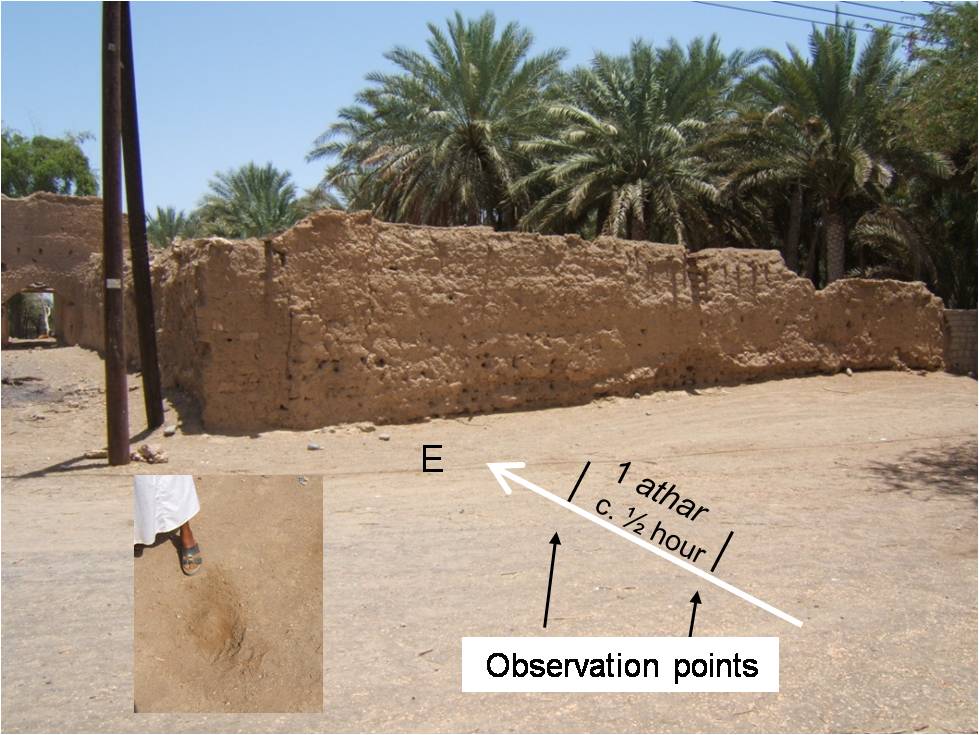 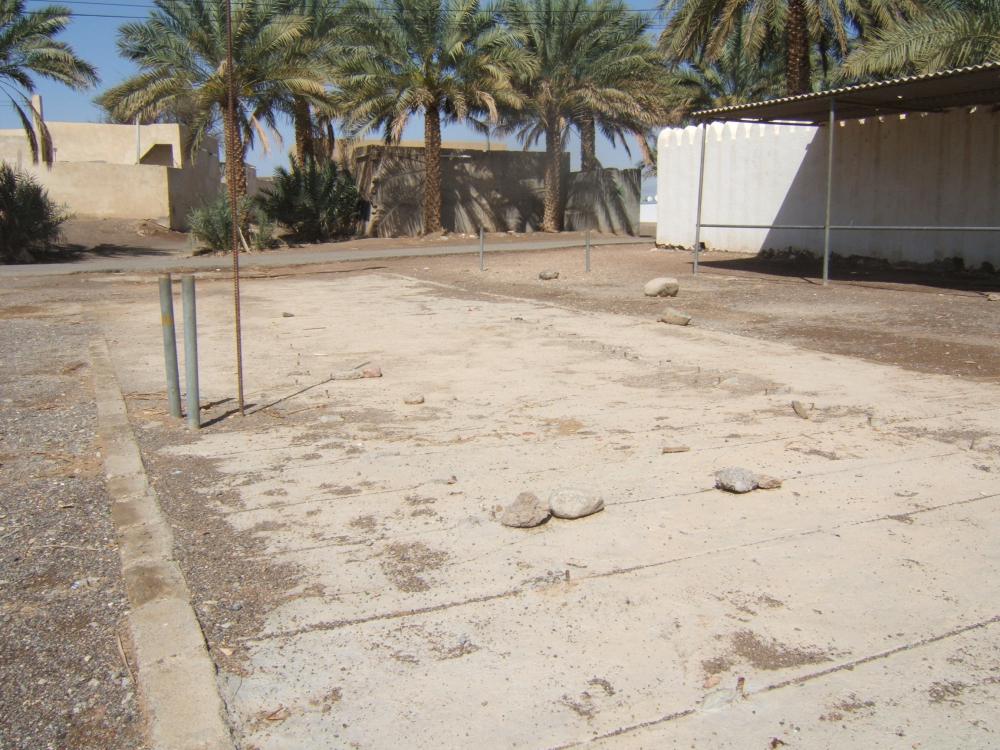 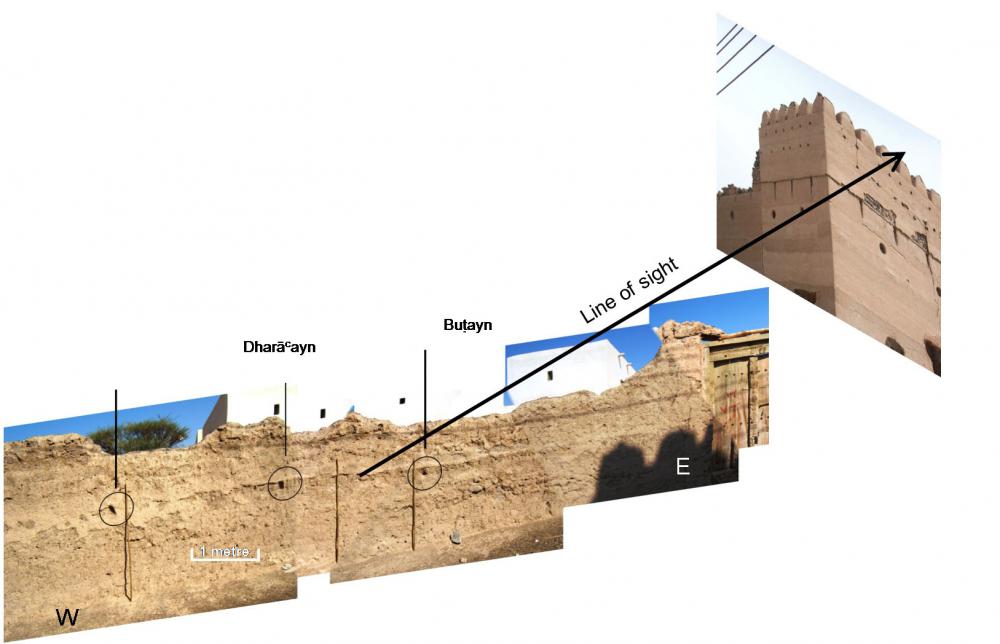 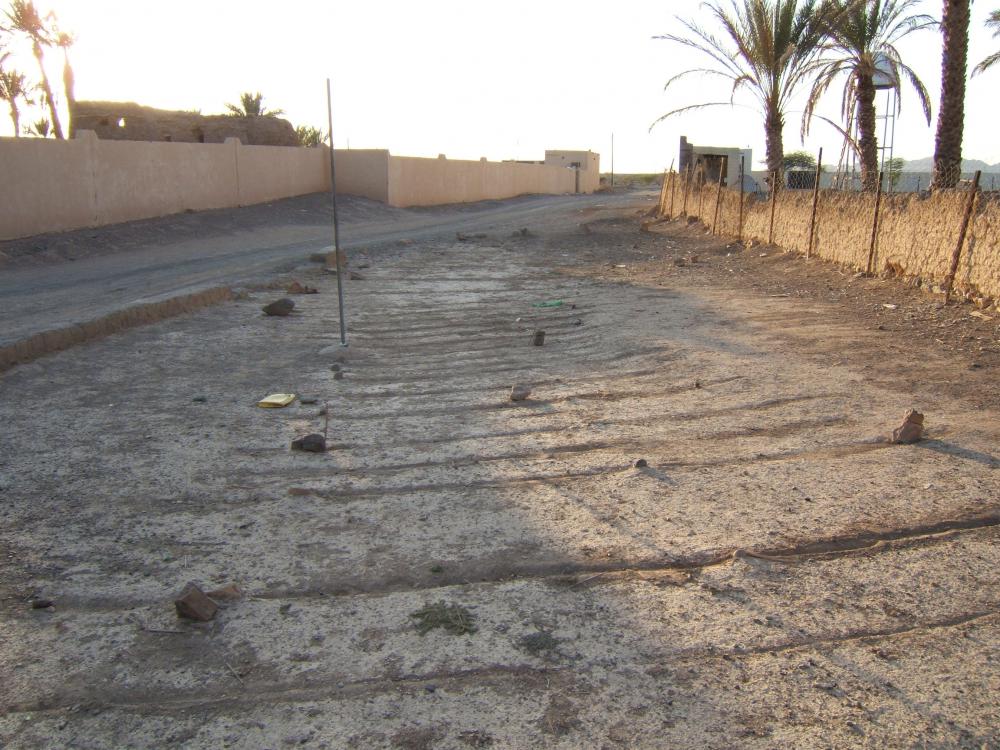 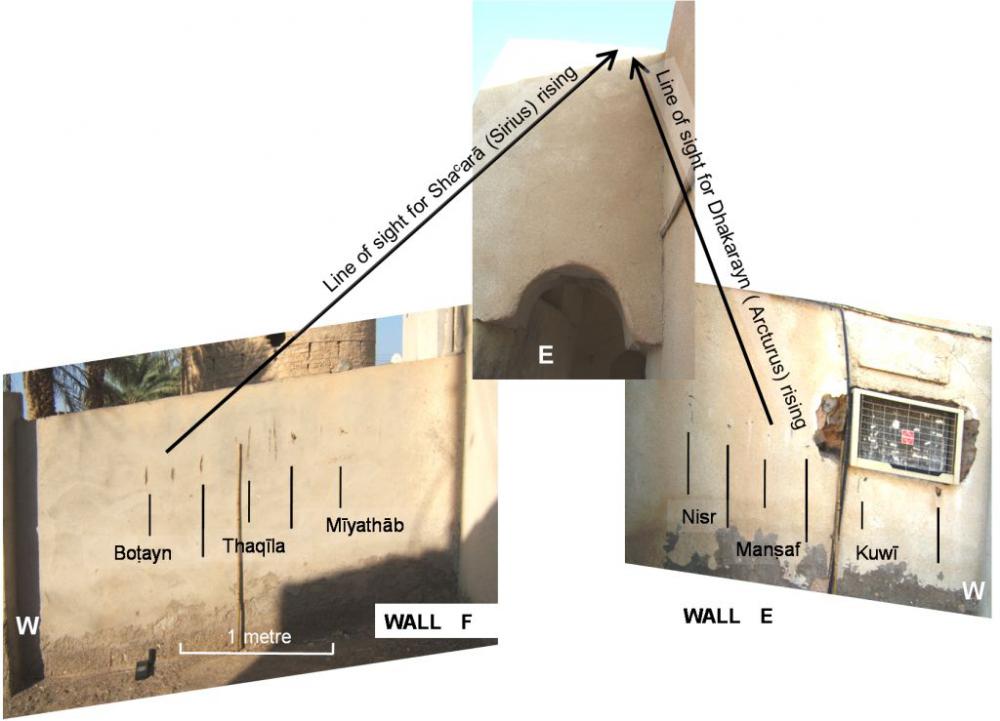 Fig. 12. Example of observing points and foresights in Al Fath. The names of stars between marks on the wall relate to the main falaj stars rising above the horizon when observing Sirius or Arcturus. Photographs and annotations: Harriet Nash 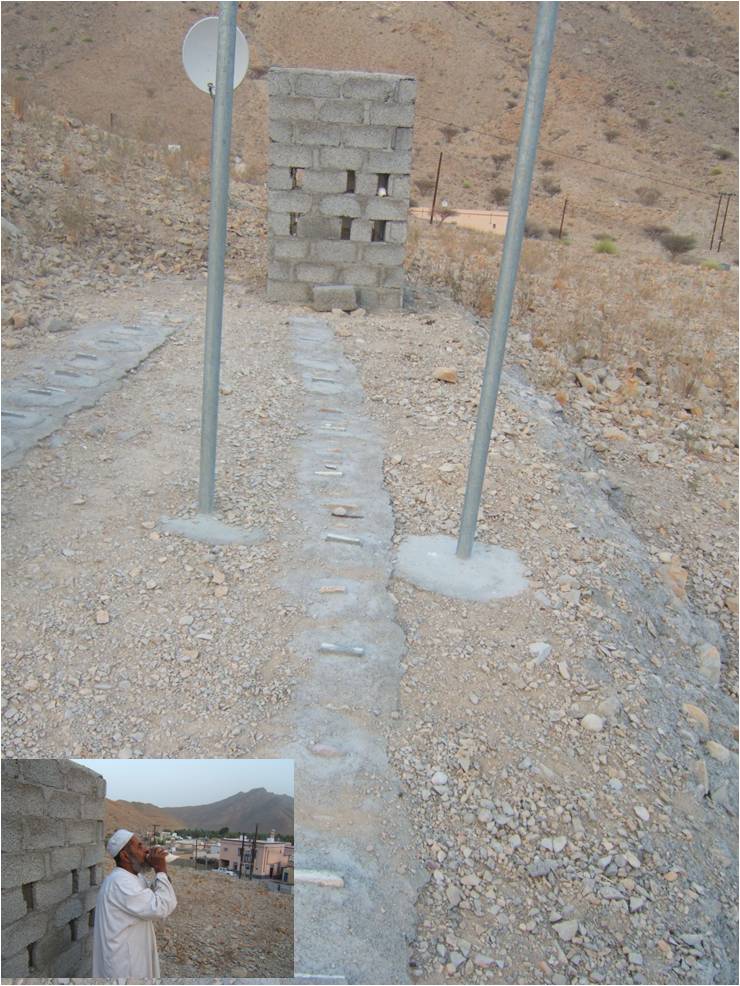 Fig. 13. The sundial in Abaat, with use of conch shell. Photographs: Harriet Nash

There are also portable artefacts relating to this practice, notably the use of a conch shell to inform farmers at a distance from a sundial that the time has come to take their water. This has been attested at two villages, Tayma and Abaat (see Fig. 13) near the town of Sur, in the east of the region. 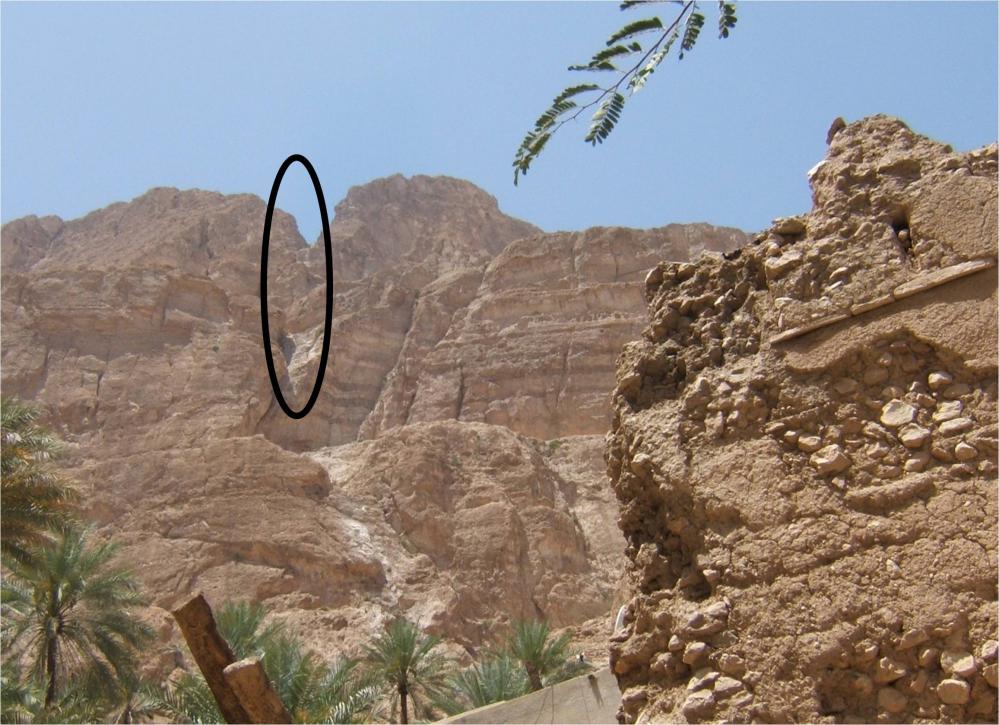 Fig. 14. Part of the “sundial” in Halam, where natural features of the landscape are used. Photograph: Harriet Nash 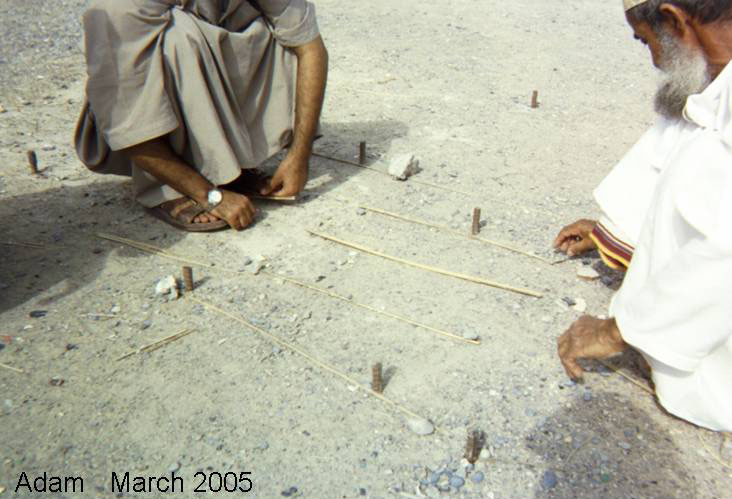 Fig. 15. Studious use of personal markers (date palm fronds) at a sundial in the town of Adam (approximately 60km west of Barzaman). Photograph: Harriet Nash

Other observing points for watching stars

Fig. 16. Horizon formerly used for watching stars in Misfat-Al-Abryeen. Towers were built as foresights for some of the main stars, apparently to assist people with poor eyesight. Photograph: Harriet Nash

The practice of using the sun and stars for timing water shares was once widespread in semi-arid and arid areas of the Middle East and Central Asia—the heartland of falaj development. The history of falaj development is relatively well documented: they date from at least 1000 BC (e.g. al-Tikriti 2002), before Oman was controlled by the Persian Achaemenids (c 6th Century BC).

The use of sun and stars is not so well documented, but it is possible that it goes back as long as the falaj systems in communities where divisions of shares less than about 6 hours each was needed. Their use in Iran has been documented (Nash et al. 2012), and it is likely that they were used in Afghanistan and elsewhere in the region. In Iran, their use stopped in about 1960. In Oman, many communities also stopped using them when wristwatches became widely available in the late 1960s-early 1970s. However, the sun is still widely used and in a few places, where the community prefers to continue with tradition and where light and dust pollution are not too severe, the use of stars also continues.

Many of the star names are pre-Islamic, and the practitioners have no knowledge of the stellar Stations of the Moon.

The authenticity of the astronomical timing system is demonstrated by:

Since these practices are handed down orally, the documents describing them are mainly based on interviews with village elders and farmers and first-hand observation by ethnographers, mostly during the last ten years. One written document has been found describing the star system used in the town of Al Hamra, on the southern edge of the Jebel Akhdar mountains; another document is an illustration of the star cycle in the town of Mudayrib. See Nash and Agius (2011).

The use of observations of stars for timing shares of irrigation water in Oman bears outstanding testimony to the way in which observations and understanding of the celestial bodies can help human communities adapt to and survive in harsh environments. This practice demonstrates a direct cultural connection between subsistence economy and the dark night sky that may well be unique in surviving almost to the present day, and is still not quite extinct. Related practices of solar observation that apply the same astronomical system of time apportionment during daylight hours continue in a number of communities, perhaps as many as a hundred. By continuing uninterrupted for hundreds, if not thousands, of years, the system in Oman has become perhaps the only surviving example of practices relating astronomical timing to subsistence economy that in all probability were once widespread.

State of conservation and factors affecting the property

There are conservation issues relating both to the intangible practice itself and to the material associations (human constructions and natural landscape) used in a few places.

The use of stars is almost extinct and is unlikely to last more than a decade or so. As the older generation dies, and younger people are not willing to learn the system thoroughly, there will be no one to check correct usage and people will change to using watches. In addition, the continued erosion of dark skies by light pollution is making it increasingly difficult to undertake the necessary stellar observations.

The buildings comprising the star clock in Al Fath are still in good condition.

In Zahib the buildings are still used, and in fair condition, but one wall, belonging to a private individual, was rebuilt a few years ago and the markers were not replaced. Watches are now used during the 1 – 1.5 hours that the wall represented.

In Barzaman, the wall used (see Figs 5 & 6) is in a fair state of repair. While stars are still used, this is unlikely to continue for very long.

Where sundials are still in use, they are well maintained.

The oral tradition is dying out because young people are generally not prepared to continue this, in the face of the availability of formal education and job opportunities outside the village.

In Al Fath, stargazing (and the use of the sundial) stopped in about 2011, when the person with most knowledge of the star timing system died, even though up to that time every farmer had used the stars. It is unlikely that any special efforts are being made to maintain the star clock. This means that some features, such as stone markers on the ground are likely to be lost quickly. Marks on the mosque walls may be lost if the mosque is repaired at some point.

Light pollution is one reason that many communities stopped using stars. The continued erosion of dark skies by light pollution means that this situation is likely to get worse.

Dust pollution and cloudy skies from changing climate are also factors that may get worse.

Non existent. Some pressure from this quarter could actually be helpful in limiting the potential for destruction of buildings used for stargazing.

Ownership of the star timing system and knowledge rests with the individuals/communities applying the system.

It is understood that all mud brick buildings in Oman are protected by law implemented by the Ministry of Heritage and Culture. However, implementation of the law appears to be ineffective.

While timing water shares by astronomical means cannot be continued beyond the point that the community wishes without becoming an artificial enterprise, the knowledge and detail can be preserved by recording and publishing it, and the structures and buildings, together with the details of how they were used, could be protected and preserved for future generations. This would need to be linked with preservation policies for the World Heritage Site already inscribed. The protection of traditional buildings is likely to be ineffective unless there is explicit agreement from the community.

Most recent records or inventory 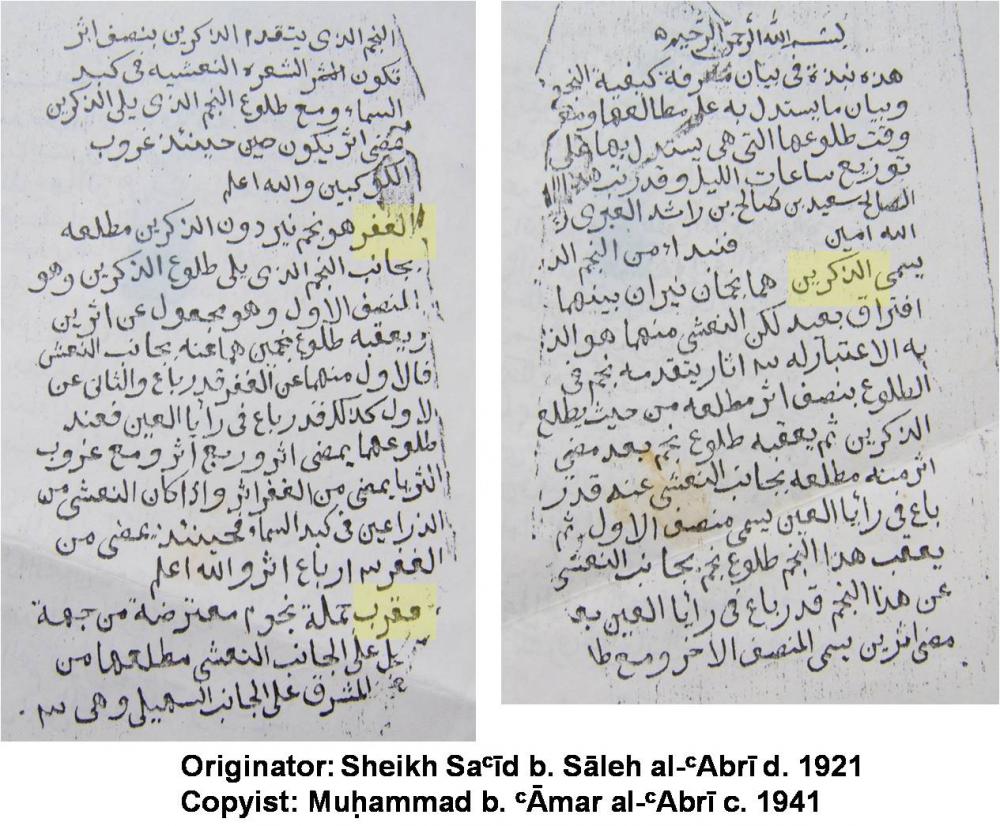 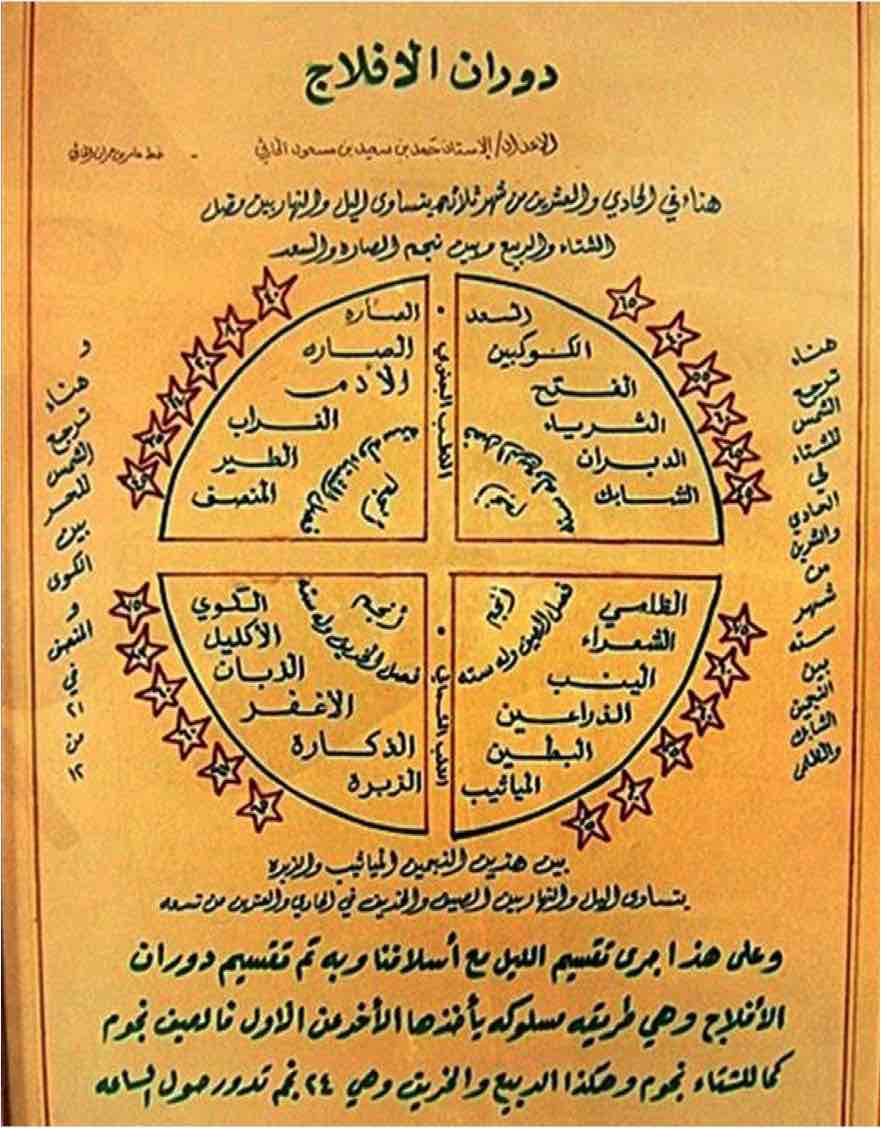 The tradition of astronomical timing of falaj water in Oman is oral: the knowledge is handed down from generation to generation. One example of a book describing the falaj systems, which includes a general description of the use of sun and stars, is al-cAbrī (c. 1980). However, the prime source of information is the communities themselves. A few villagers and researchers have written down lists of the stars used and the number of days each ’main‘ star is the first to rise, and these are collated in Nash (2011, pp. 97-98). There is little documentation related to the use of the sun and stars. Two rare examples related to stars are shown below (Figs 17 & 18).

Information was collected from the communities in the settlements listed in Table 1, including the stars used and their identifications, by Harriet Nash in the period 2005–2011. That on the Al Hamra and Mudaybi areas has been published (Nash 2011), as has that from Wadi Beni Kharus (al-Ghafri et al. 2013). That from the area near Sur has yet to be published. A summary of methods of watching the stars and their names and identifications is given in Nash and Agius (2011).

al-cAbrī, Badr (c. 1980). Al-bayān fī bacḍ aflāj cUmān [A Description of some of Oman’s Aflāj], Muscat. (Publisher not known, out of print; there is a copy in the Oman Studies section of the library at Sultan Qaboos University, Oman.)

Nash, Harriet (2011). Water Management: the Use of Stars in Oman, Society for Arabian Studies Monographs No. 11, Archaeopress, Oxford. (This includes photographs of buildings used, copies of star lists and one manuscript from c. 1947, describing the stars used in Al Hamra.)