Modern astronomy has mostly been developed in a few exceptional places on our planet where a unique set of natural circumstances converge. These sites have been chosen for decades by the international scientific community to develop the most important groups of telescopes in the world.

Historically, ground-based observatories have provided the vast majority of our knowledge of outer space. However, present-day technical and scientific requirements restrict suitable areas to very specific and limited locations: those that offer good conditions for the development of astronomy, and of optical and infrared astronomy in particular. There are only a few places on our planet featuring this unique combination of environmental and natural circumstances: well-conserved spaces with very little alteration to natural starlight.

The importance of the Windows to the Universe lies not only in the uniqueness of each site and group of telescopes, but also in the fact that, taken together, they cover both the northern and southern parts of the celestial dome. 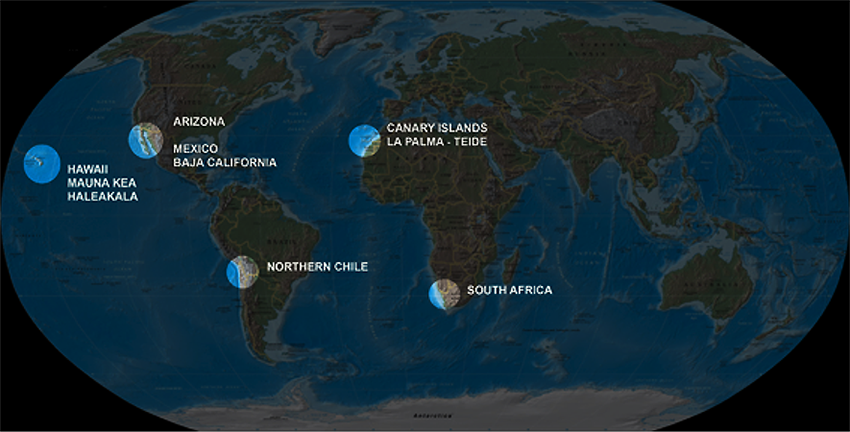 The Windows to the Universe meet several conditions of authenticity that are expressed through the following attributes:

The conservation status of the designated case study areas qualifies as ’intact‘ in relation to the applicable criteria.

The three ’Windows to the Universe‘ selected include the world’s most important representation of the telescopes that have marked the history of modern astronomy throughout decades. All the telescopes, even the oldest ones, are in good condition. Under no circumstances have the telescopes been demolished. If they lose their original function because of scientific and technological progress, they are adapted to other functions, whether scientific, educational, or astro-tourist. In some cases the buildings and instruments have also been conserved.

The identity and unique construction features of the buildings and groups of telescopes have been maintained and will be kept intact, except for instrumental modifications or readjustments.

Exceptional sky quality and an environment undisturbed by external activities unrelated to sky observation are the natural conditions that determine its uniqueness as a superlative natural phenomenon, by application of criterion (vii). These conditions have remained practically unchanged over the past decades. This is demonstrated by the continuous records carried by the three identified sites, in relation to all air quality factors. The three sites keep continuous measurements of sharpness, seeing, and the natural darkness conditions of the night sky, concluding that natural conditions have remained practically unchanged to date.

The influence of light pollution beyond the areas under consideration, or the possible occupation of land by other activities are effects that can compromise the integrity of resources. These effects are being mitigated in every case.

Permitted activities in the selected areas are fully compatible with resource conservation. Only professional astronomical observations, occasional research and astro-tourism activities are allowed, ensuring the sustainable use of each area.

The selected areas and their protection zones are of an appropriate size to ensure resource integrity. Furthermore, the areas under consideration are surrounded by quite large protected areas.

The Windows to the Universe are groups of telescopes located in unique environments with unrivalled natural characteristics. There are no better places on the planet from which to observe the skies in optical and infrared wavelengths. The major advances in astronomy that have been made at these places have come to form part of the collective memory of humankind.

During the 20th century the observatories of Chile, Hawaii, and the Canary Islands have come to represent the peak of earth-based observational astronomy and a crucial period for the development of science. They contributed decisively to many of the most important advances and discoveries in modern astronomy throughout the century, and continue to do so.

The Windows to the Universe are also emblematic of one of the biggest international cooperative efforts in the history of astronomy, reaching beyond the borders of countries and cultures.

The Windows to the Universe thus represent a unique combination of three factors:

The scientific achievements that have been accomplished at these three sites include: