(Part of Windows to the Universe: Leading Optical Observatories)

See below for details of the precise locations of individual telescopes.

Area of property and buffer zone

Fig. MK.1c shows land ownership around Mauna Kea. A large area around the science reserve is preservation land owned by the state of Hawaii. Few people live within 25 km of the summit. Mauna Loa is a large active volcano located to the south of Mauna Kea and its upper slopes are uninhabited. 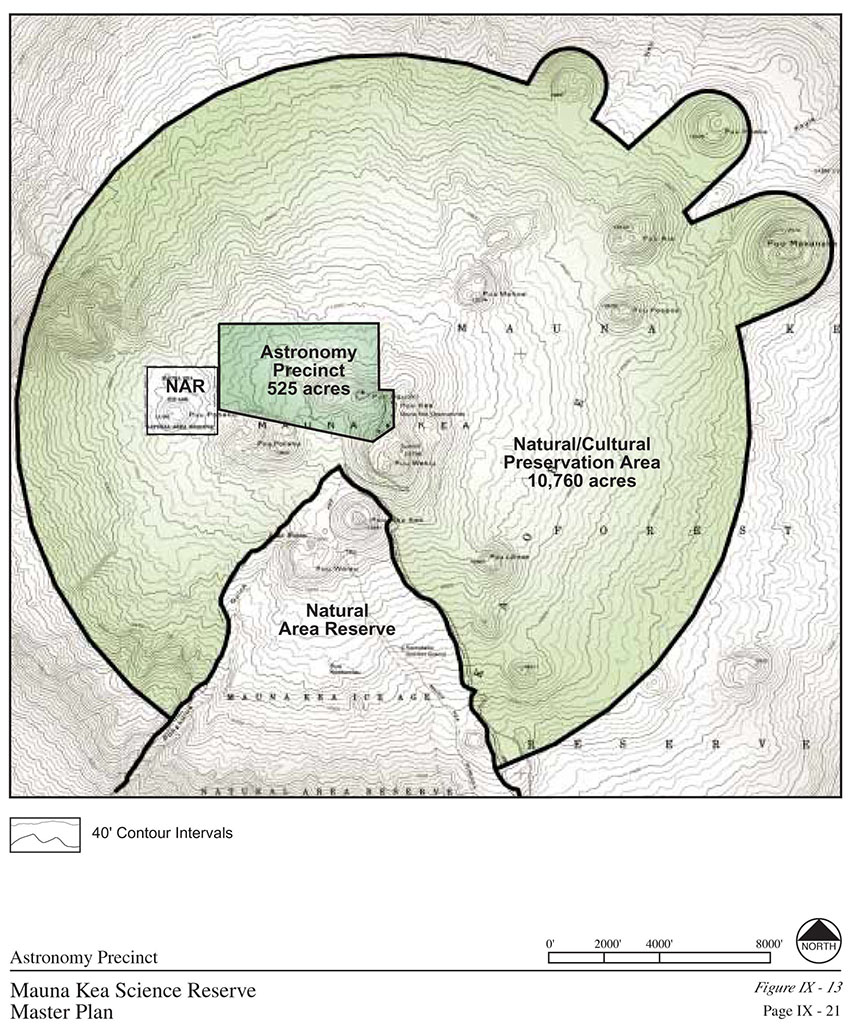 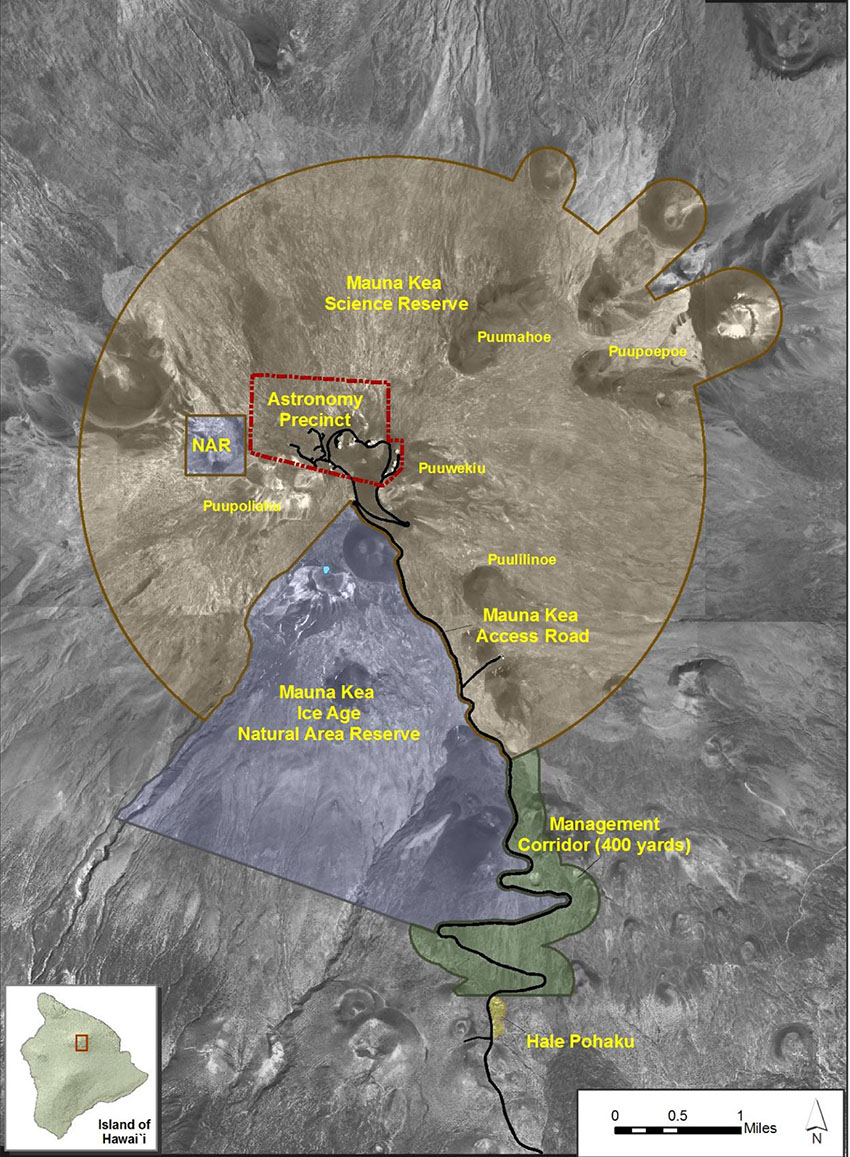 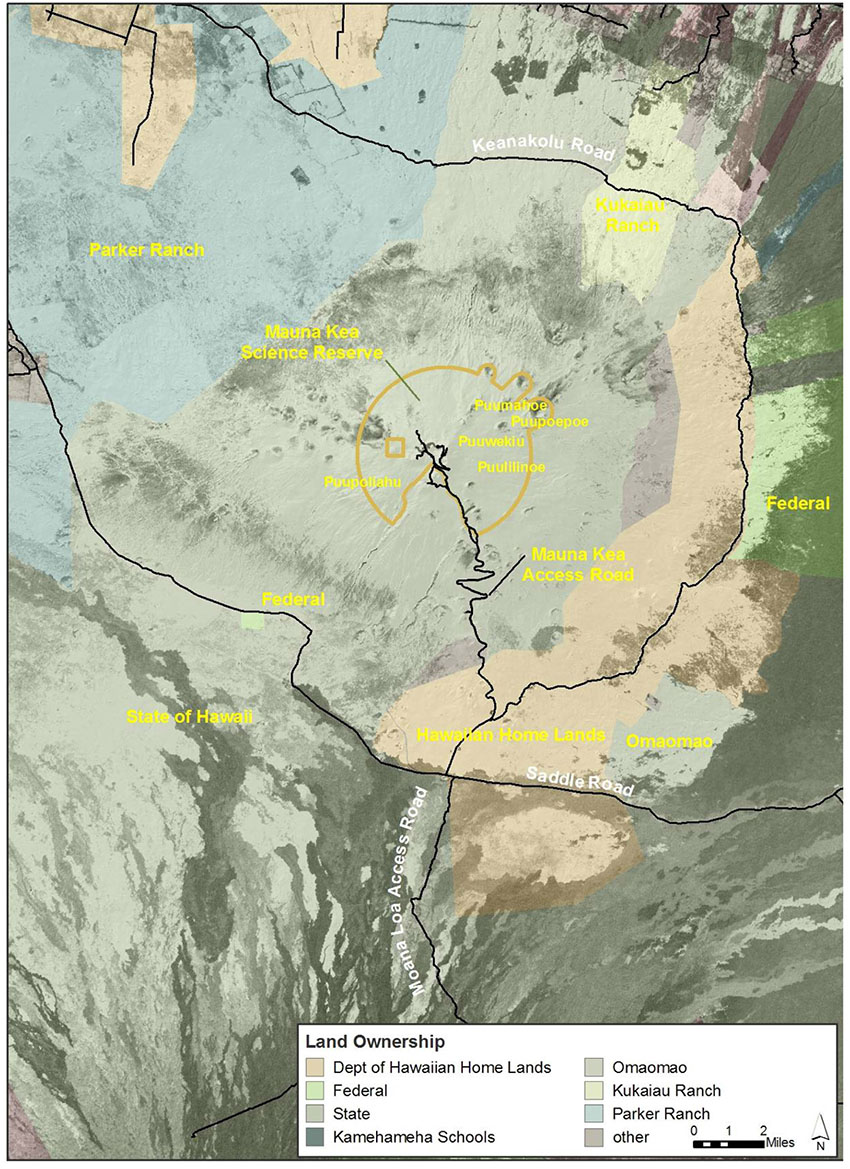 Description of the property

Mauna Kea Observatory is a collection of astronomical research telescopes located close to the geographic summit of Mauna Kea on the Island of Hawai‘i. 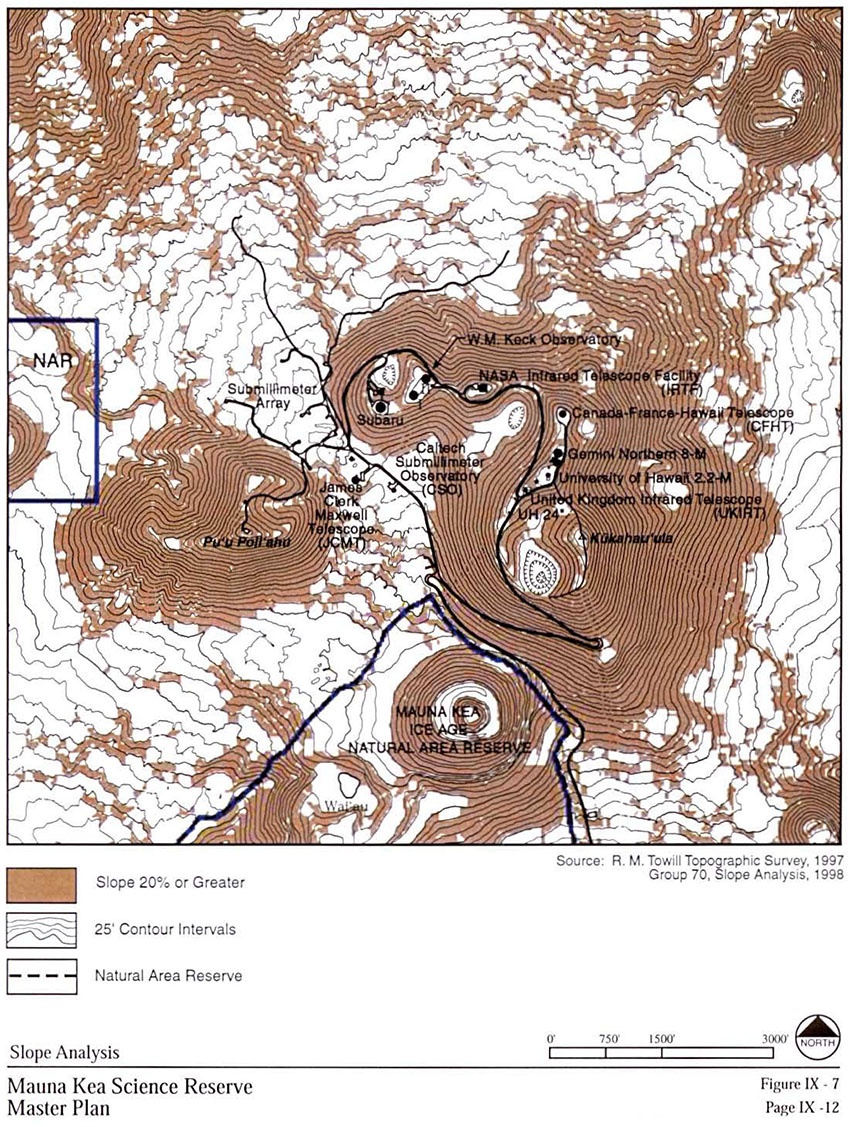 Fig. MK.2: Locations of observatories near the summit of Mauna Kea

The Submillimeter Array (SMA) is not shown in the table because it consists of 8 movable antennae with positions that change.

The area of Mauna Kea designated for astronomical use stretches north to the TMT site, and encompasses the area already developed with telescopes. Existing cinder cones near the summit that do not have telescopes on them, such as the Pu‘u Wekiu (the summit), Pu‘u Poliahu (to the west) and Pu‘u Hau Kea (to the south) will not be used for telescopes.

The only telescope presently under development is the Thirty Meter Telescope.

The Caltech Submillimeter Observatory is expected to be shut down and removed within 4 years.

State of conservation and factors affecting the property

The buildings and telescopes at the Mauna Kea observatory are well maintained, consistent with the operation of a major research facility.

One of the main factors affecting astronomy on Mauna Kea is artificial lights that cause light pollution. The specific form of light pollution that affects the telescopes is increased sky glow. Artificial light sources increase the sky background level above the natural background. This diminishes astronomers’ ability to see faint objects, and effectively decreases the effective size of the telescope. Light pollution affects optical astronomy—astronomy at wavelengths where the human eye is sensitive. Light pollution does not affect infrared astronomy. However, the window of the electromagnetic spectrum where the human eye is sensitive is one of the most valuable windows available to astronomy, because Earth’s atmosphere has high transparency. The sky is particularly dark at blue and green wavelengths, below 555 nm (see Fig. MK.3). 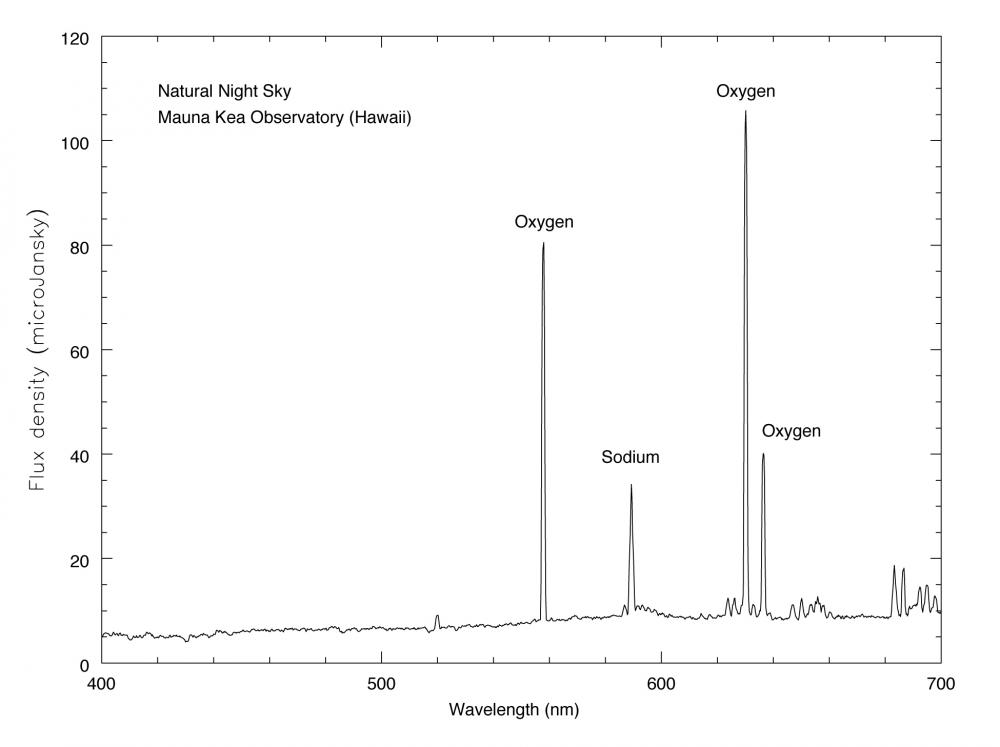 Fig. MK.3: A spectrum of the night sky seen from Mauna Kea. Nearly all of the flux shown here is natural. Sodium emission from low-pressure sodium street lights forms part of the emission near 589 nm.

Fortunately, a strong lighting ordinance that was enacted in 1989 has provided good protection for the telescopes from light pollution. As a result, the sky background on Mauna Kea is very close to the natural level. Fig. MK.3 shows a spectrum of the night sky seen from Mauna Kea.

The eastern side of the island is frequently covered by clouds, and these clouds help to suppress artificial lights from populated areas such as Hilo in the eastern part of the island.

The submillimeter, radio and optical telescopes on Mauna Kea also need to be protected from radio frequency interference. There is a ban on fixed radio transmitters on Mauna Kea. There is one low power radio repeater located on Mauna Kea and used by the Hawaii Volcanos Observatory for safety reasons. A second repeater can be activated in the event that the Governor of Hawaii declares an emergency.

Population growth on the Island of Hawaii is relatively rapid, particularly on the western side of the island that is less frequently covered by clouds. Growth in lighting associated with this growth in population is one of the largest concerns for preservation of the dark sky over Mauna Kea, and the ability to continue to do optical astronomy from Mauna Kea.

The adjacent Pohakuloa Training Area, used by the United Stated Army for military training is of particular concern as a source of artificial light. Expansion of this facility is presently occurring. Because it is located only 10 km from the observatory, lights at this location have a much higher impact than more distant lights. Additionally, because this is a federal facility, it is not regulated by the County lighting ordinance. However, the army has cooperated with the University of Hawaii by following the lighting ordinance whenever possible, and by reducing lighting to the minimum levels required.

Conservation groups are frequently opposed to astronomical development on Mauna Kea. Environmental and cultural pressures have limited future astronomical use as outlined in the Mauna Kea Master Plan.

Mauna Kea is classified as a dormant volcano. It has not erupted since the last ice age. Any future eruption is expected to be on the south flank, and not at the summit.

The Island of Hawaii has three active volcanos—Kilauea, Mauna Loa and Hualalai. Kilauea is presently undergoing an extended eruption that is producing large amounts of volcanic gases. The volcanic gases are nearly always trapped in the lower levels of the atmosphere, and do not affect Mauna Kea. Mauna Loa erupts infrequently. An eruption from Mauna Loa may have some temporary adverse effects on the observatory, including volcanic gases and temporary sky glow. Hualalai erupts more infrequently, and is less likely to have adverse effects on Mauna Kea.

The road to the observatory is a public road that is always open unless weather conditions make it unsafe. Excessive numbers of visitors at night can cause problems from car headlights shining into telescope domes. Fortunately, at present, most visitors depart the summit area shortly after sunset, and few people travel to the summit for sunrise. The summit area is cold, often windy, and only limited shelter for tourists. Visits to the summit area by tourists are therefore usually of short duration.

There are no permanent inhabitants at Mauna Kea Observatory. Visiting astronomers stay at Hale Pohaku, located at an altitude of approximately 2,830 meters on the southern flank of Mauna Kea, approximately 7 km from the telescopes. Hale Pohaku can accommodate up to 72 temporary residents, but occupancy has been diminishing recently because of increasing amounts of remote usage of the telescopes. Typical occupancy is now less than 30.

The land where Mauna Kea Observatory is located is owned by the State of Hawaii. The Mauna Kea Science Reserve is leased to the University of Hawaii.

A lighting ordinance is in place that restricts artificial lighting in the County of Hawaii (which encompasses the entire Island of Hawaii, where Mauna Kea Observatory is located). A state lighting law requires the state department of transportation to follow the county lighting ordinance. A new state lighting law is presently under consideration by the 2012 Hawaii State Legislature. If passed, this bill will afford further protections to the dark night sky over Mauna Kea. A state ’Starlight Reserve Committee‘ has been established to recommend further legislation to the state government to protect the night sky over Mauna Kea and Haleakala Observatories.

A staff of Mauna Kea Rangers patrols the Mauna Kea Science Reserve. They are tasked with preservation of the natural and cultural environment, and also provide assistance to persons in trouble. Law enforcement assistance is available from the State of Hawaii Division of Conservation and Resources Enforcement, and from the County of Hawaii Police Department.

The Mauna Kea Science Reserve Master Plan was adopted by the University of Hawaii Board of Regents on June 16, 2000.

The Comprehensive Management Plan (CMP) provides a management framework for the University of Hawaii (UH) to address existing and future activities in the UH Management Areas on Mauna Kea. The CMP was approved by the state Board of Land and Natural Resources (BLNR) in April 2009 on the condition that UH complete four sub-plans addressing: public access, cultural resources management, natural resources management, and decommissioning. On March 25, 2010, the BLNR voted unanimously to approve the CMP’s four sub-plans, along with the management framework and implementation for project development. The sub-plans are:

Kahu Ku Mauna (Guardians of the Mountain) is a nine-member council named by the MKMB. The council advises OMKM, MKMB, and the University Chancellor in Hawaiian cultural matters affecting the Mauna Kea Science Reserve.

The Mauna Kea Ice Age Reserve is managed by the State of Hawaii Department of Land and Natural Resources (DLNR).

DLNR is headed by the Board of Land and Natural Resources and manages the state’s public lands. Several divisions within DLNR share management responsibility for Mauna Kea lands, including the Division of Aquatic Resources (DAR), Division of Conservation and Resource Enforcement (DOCARE), the Division of Forestry and Wildlife (DOFAW), the Natural Area Reserves Commission, the Land Division, the Office of Conservation and Coastal Lands (OCCL), and the State Historic Preservation Division (SHPD).

The Mauna Kea Observatories Oversight Committee, composed of representatives from all of the observatories including those operated by IfA, oversees MKSS activities. . Each observatory pays into accounts held by The Research Corporation of the University of Hawaii that are used to fund MKSS activities including road maintenance, snow removal, facilities maintenance and management at Hale Pōhaku, common utilities and the VIS.

MKSS also supports, under the direction of OMKM, ranger services.

Sources and levels of finance

The University of Hawaii at Hilo provides funding for the Office of Mauna Kea Management.

The State of Hawaii paid for the road that goes up the southern side of Mauna Kea to the summit region where the telescopes are located, with a contribution from the Keck Observatory.

The telescopes on Mauna Kea collectively fund maintenance of the roadway, and snow removal operations. The telescope organizations also provide funding for the Visitor Station.

Sources of expertise and training

Astronomers working for the University of Hawaii and the other telescopes on Mauna Kea are experts on the astronomy needs of the observatory.

A Visitor Station is located at an altitude of 2,800 meters (9,200) feet, and is part of the Hale Pohaku facility. The Visitor Station conducts nightly stargazing, and is open every day of the year. There is presently no charge for visitors.

The Visitor Station is operating at capacity, and is not actively being promoted. Various tourist publications and the internet promote the Visitor Station and its stargazing program to local residents and to tourists.

Photos and other AV materials 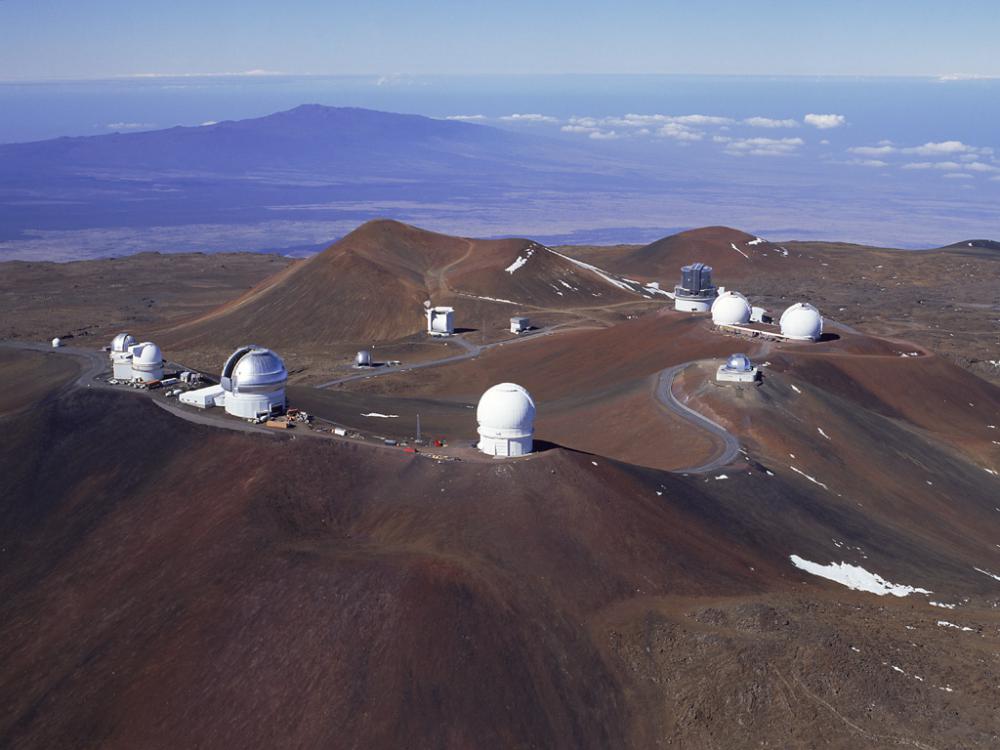 Fig. MK.4: Aerial view of Mauna Kea Observatory seen from the northeast in 1998. The Submillimeter Array is not seen in this photograph. The proposed site for the Thirty Meter Telescope is on the plateau to the right of the region shown in the photograph.