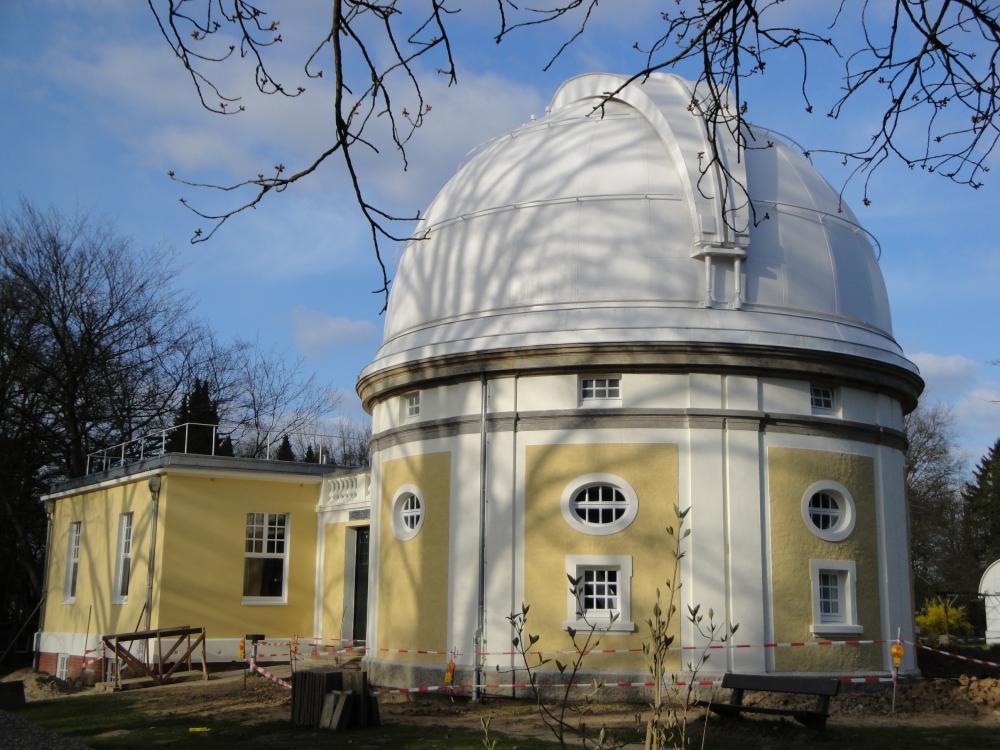 Hamburg Observatory was at the beginning of the 20th century among the most modern and largest observatories in Europe, was not only important for Hamburg or Germany.
The neobaroque architecture, built by Albert Erbe (1868--1922) in 1906-12, is not only impressive in the respect to technology but also to aesthetics.

There were two innovative ideas: first, the observatory was moved from the Millertor in the city center -- because of increasing air pollution caused by the nearby factories and by the steamships, disturbing electric lighting of the city and vibrations by the trams.
Second, the introduction of the astronomy park layout like in Nice, 1879-1886, and Heidelberg-Königstuhl, 1896-1900, instead of one central building with the three domes on the top.


Transition from classical astronomy to modern astrophysics around 1900 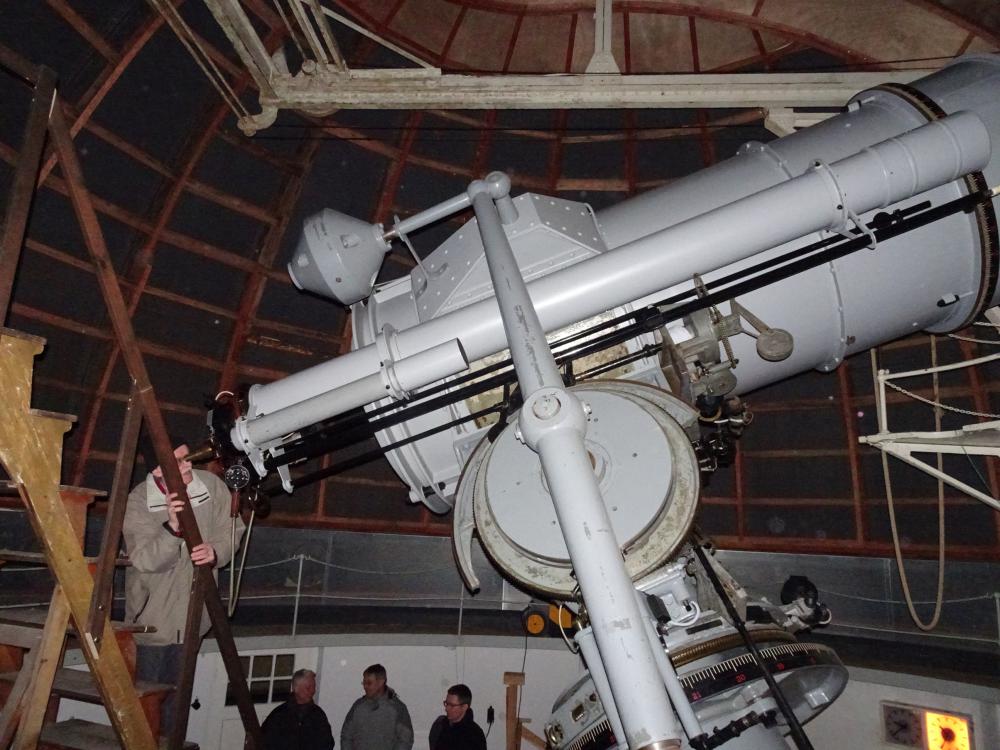 Observatories through the 19th century had an emphasis in  positional astronomy, combined with time service for the city and for navigation.
At the turn from the 19th to the 20th century astrophysics as a new field of astronomy started to play the dominant role. This new kind of research caused new instrumental equipment (reflecting telescopes, spectrographs, instruments for astrophotography, photometers and solar physics equipment), but also a new architectural layout where the new functions are visible.

Hamburg Observatory with its modern astronomy park layout, prestigious architecture, instrumental equipment, relevance for research and state of conservation -- all this, based on our current state of knowledge, this combination is quite unique and is therefore of national and international importance. 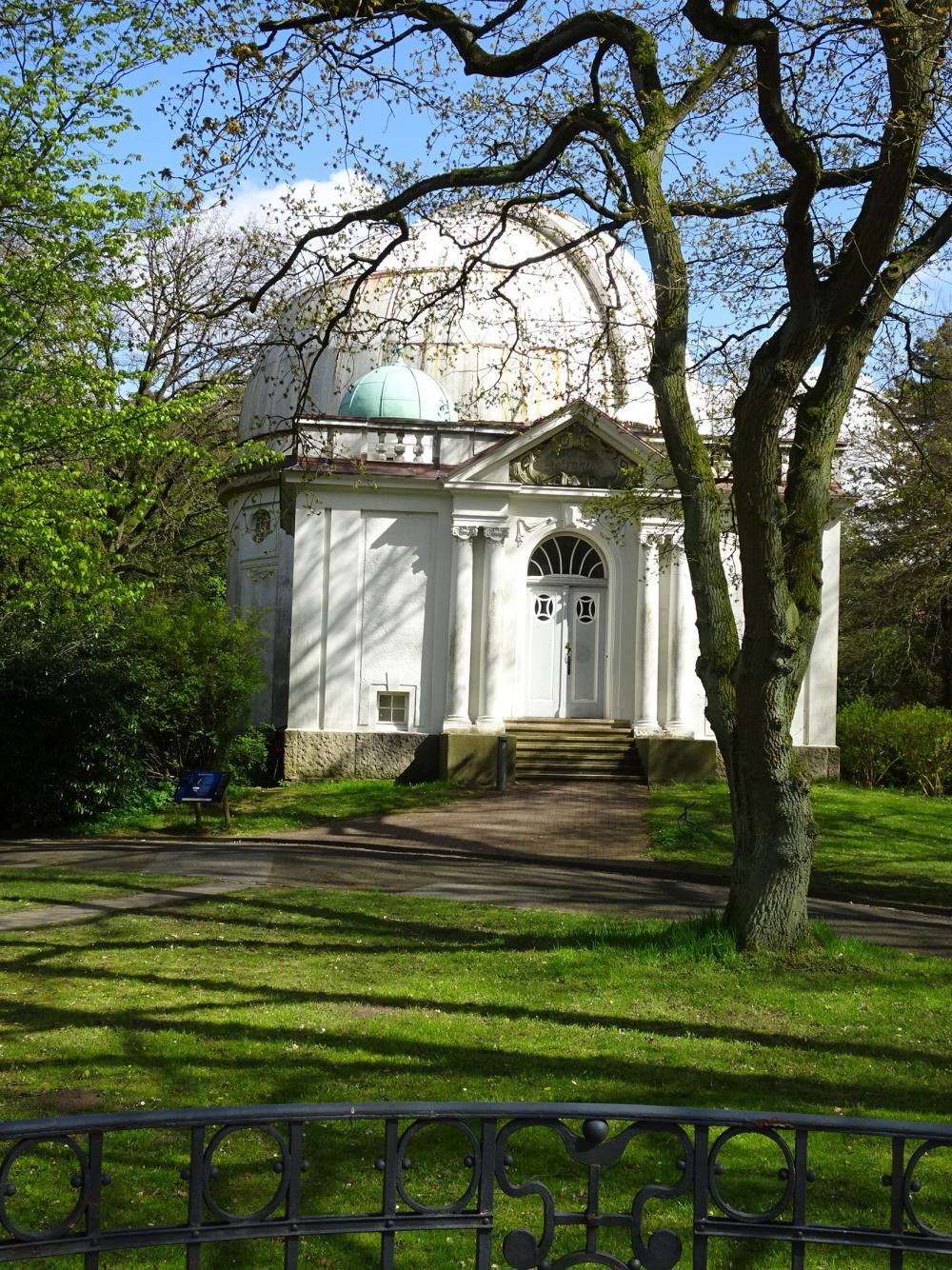 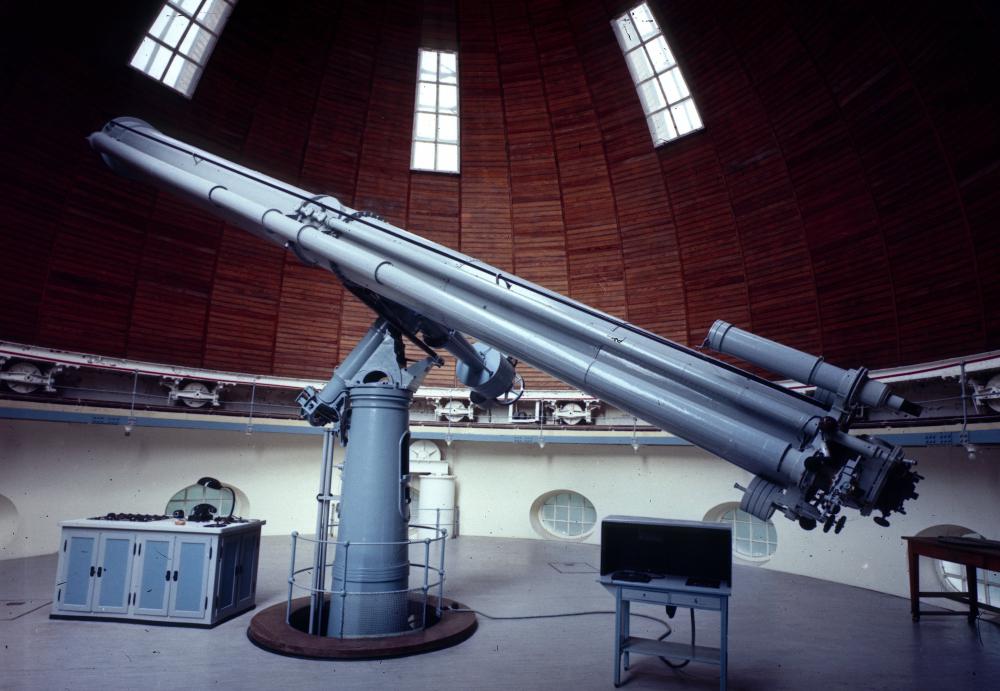 Hamburg Observatory together with a group of observatories around the world shows very well this important step in the development of observatory architecture, this transition around 1900, the change from classical astronomy to modern astrophysics concerning the choice of instruments, the modern architectural structure and the idea of the astronomy park; all this is an important cultural heritage connected with observatories of this time.
Hamburg Observatory, the urbanistic complex, the buildings and their architecture, the quality of instruments, the scientific archives (collections of photographic plates, chronicles, observation books, correspondence, star catalogues, etc) as well as the scientific/ intellectual achievements, inventions and discoveries made by the persons related to the individual observatory are all to be understood as categories of the cultural heritage (also in terms of scientific heritage).
This corresponds to the four main categories according to which the "outstanding universal value" of the observatories will have to be evaluated: historic, scientific, and aesthetic. The following criteria ii, iv and vi for the "outstanding universal value" are relevant.
A serial trans-national application for inscription in the World Heritage List is planned, La Plata Observatory, Argentina, together with Hamburg Observatory (2021). 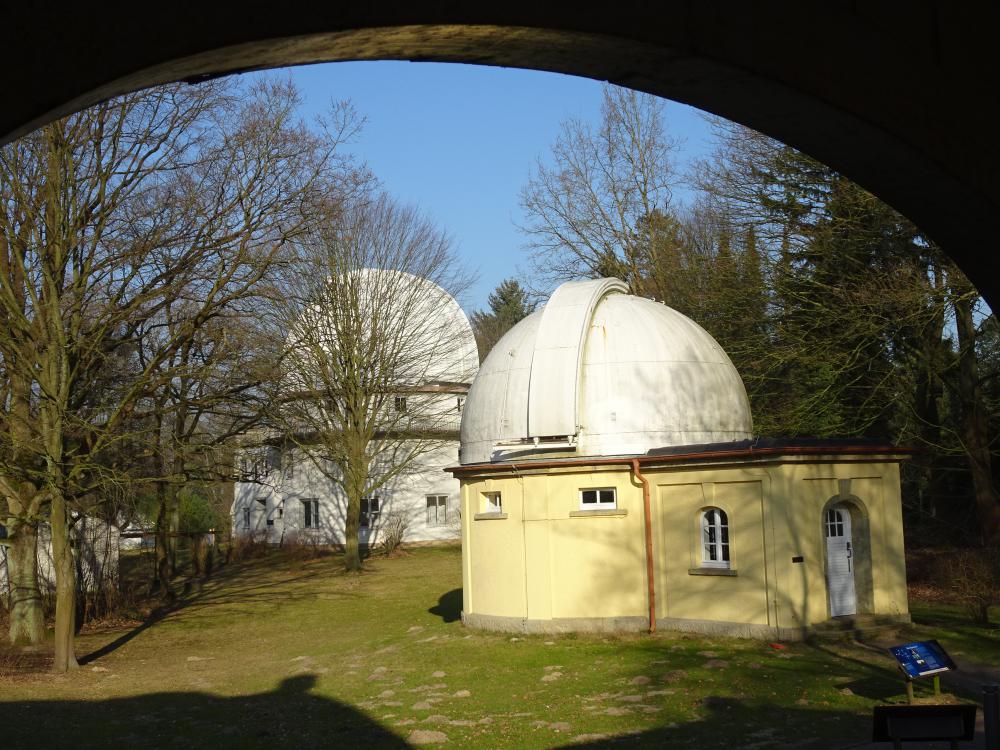 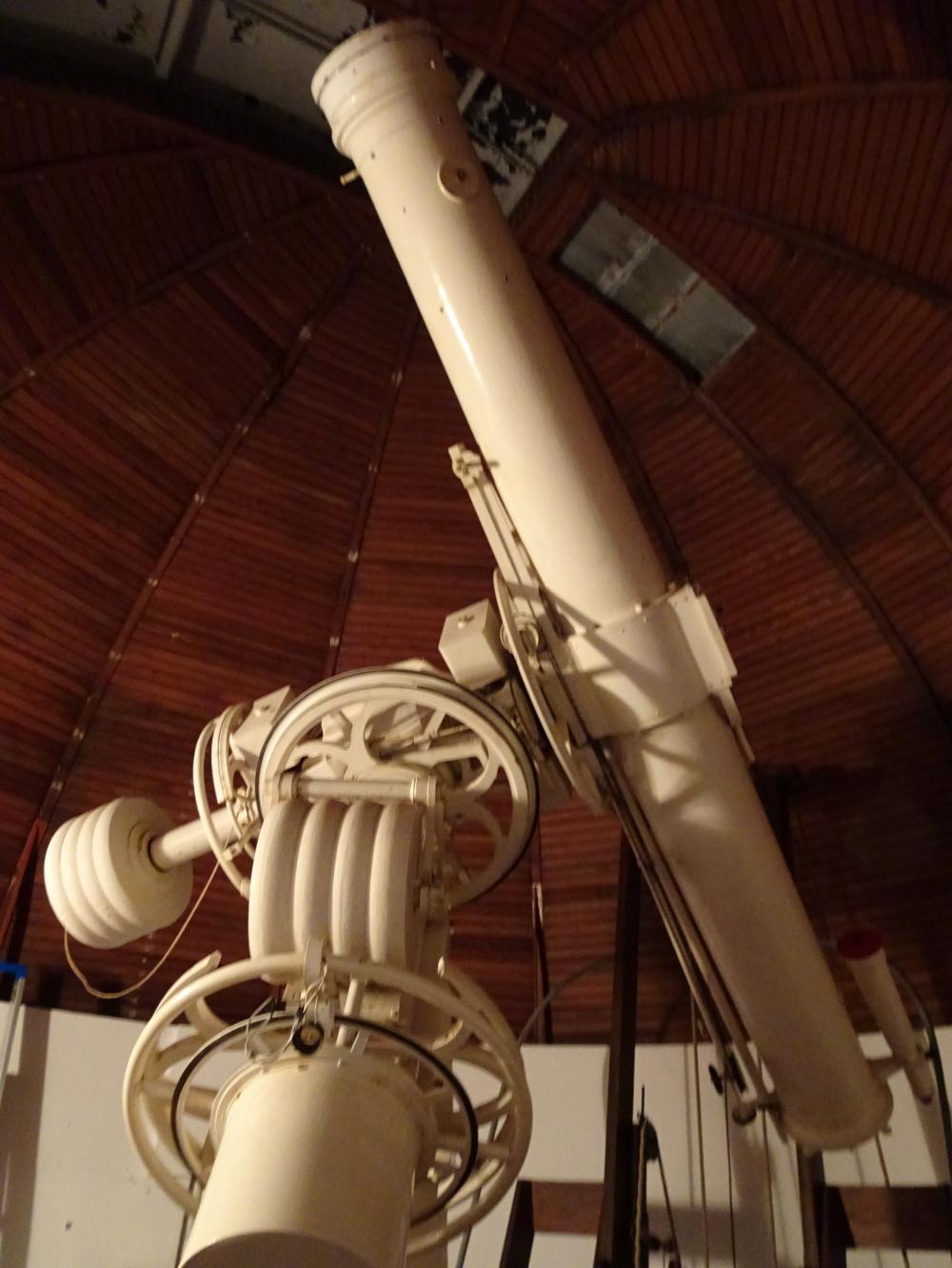 An important task of the observatory was the time keeping with transit instruments. The signal was transferred to the Timeball in the port of Hamburg. In 1912, it was done the first time with wireless (radio) signals - one year before Paris Observatory, using the Eiffel Tower as an antenna (November 1913). 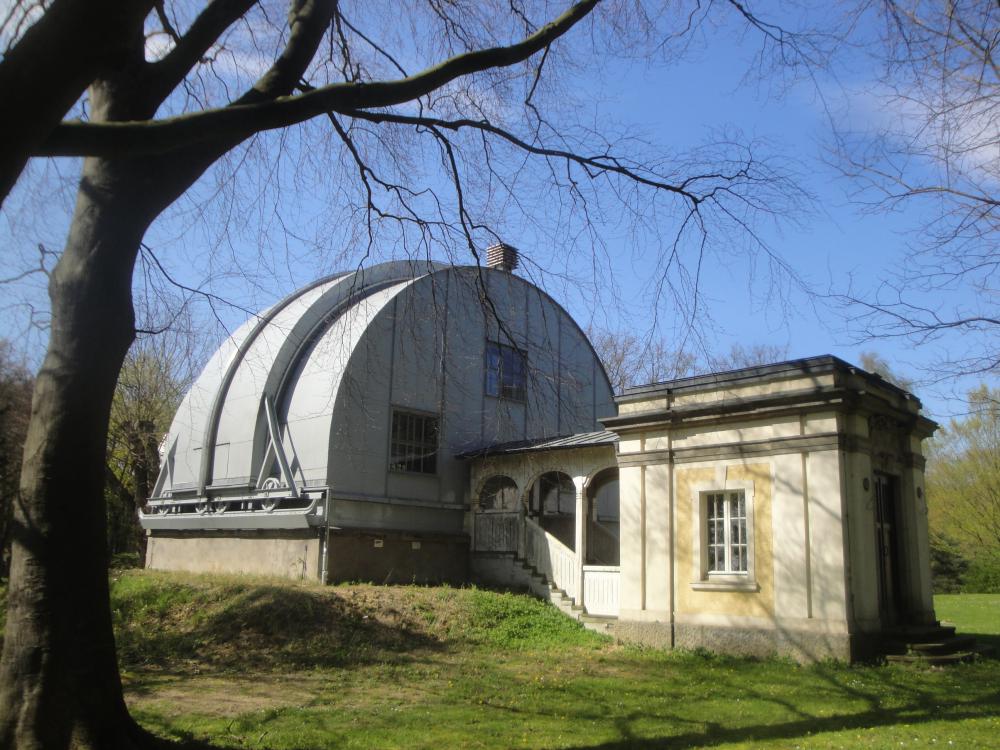 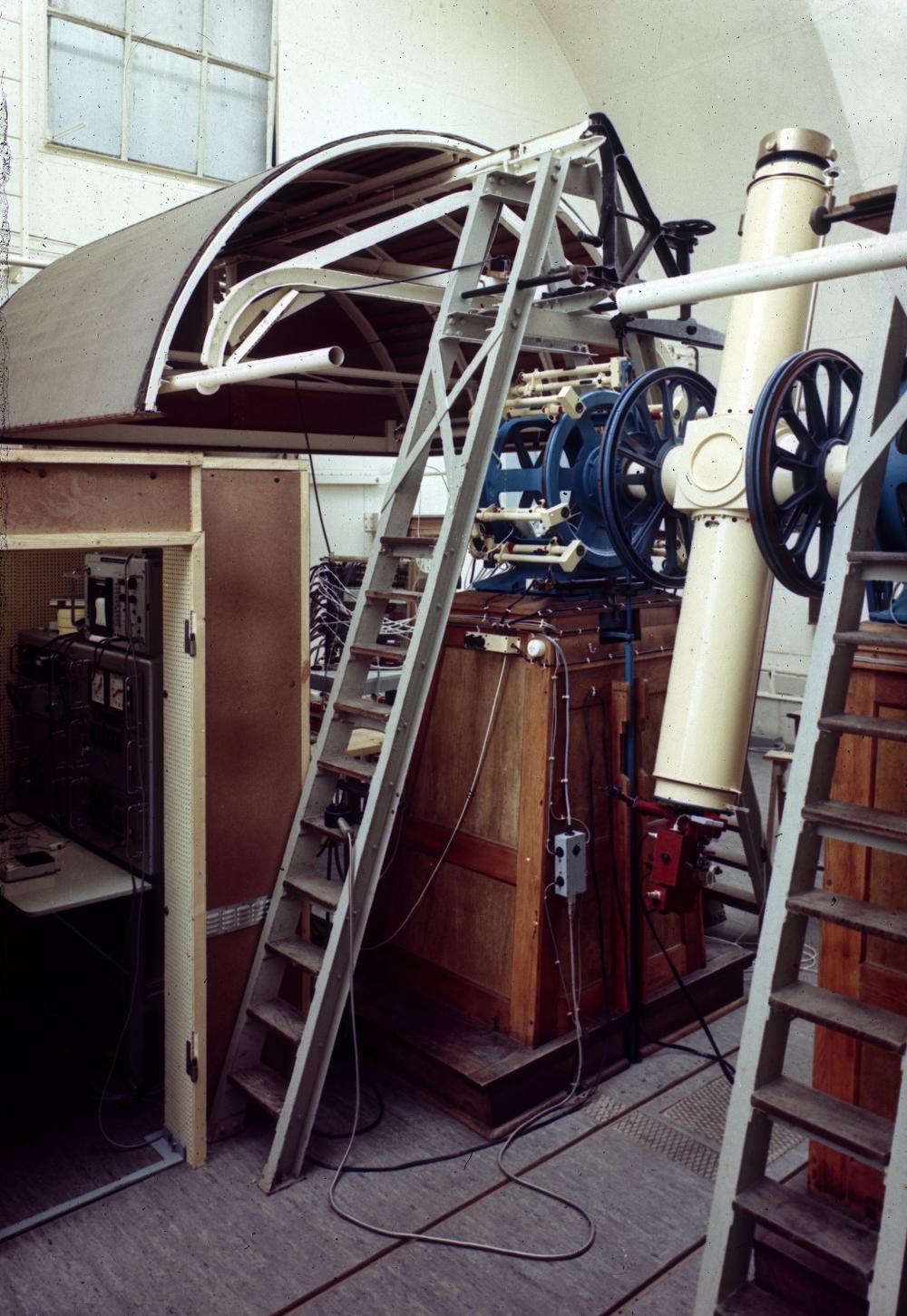 Directors of the Observatory 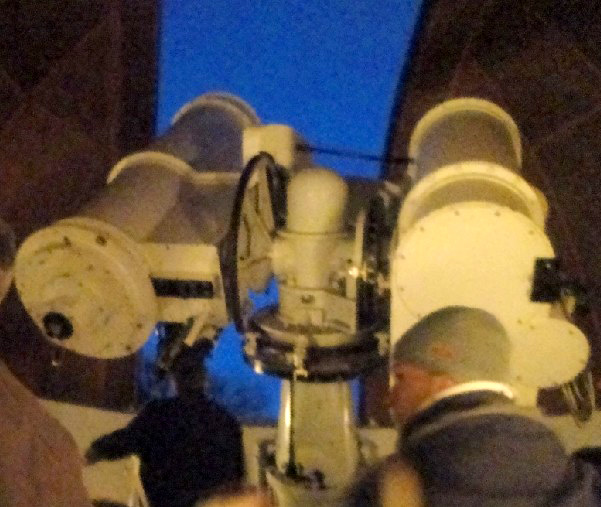 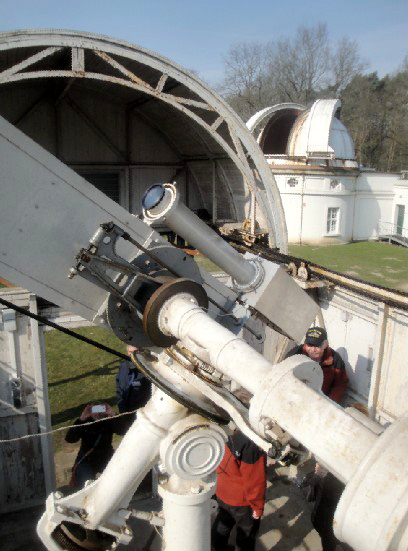 Richard Schorr (1867-1951) became director of Hamburg Observatory in 1900 and stayed until 1941. He raised the money and planned the new observatory, the architecture and the layout of the astronomy park, and the instrumentation. His main interest was astrometry and proper motion of stars, but he started also astrophysics, especially solar physics (8 big eclipse expeditions). He initiated many catalogue projects, most famous the AGK2 (observed 1913--1920, published 1951-1958). He and the Danish astronomer Holger Thiele (1878-1946) used the AGK2 for searching and position determination of comets and asteroids and they discovered 30 new asteroids and one new comet, D/1918 W1 (Schorr). The most important task was to support Bernhard Schmidt.

Bernhard Woldemar Schmidt (1879-1935), an optician born in Estonia, studied in Uppsala and at the Technical Highschool Mittweida near Chemnitz. In his workshop in Mittweida he became wellknown by building telescopes for amateur astronomers. He was allowed to improve the 50-cm Steinheil visual refractor at the Potsdam Astrophysical Observatory. Schorr realized the excellence of Schmidt’s constructions, especially mirrors, and offered him to set up his workshop in Hamburg Observatory in 1927. First Schorr asked Schmidt to build a horizontal mirror and coelostat telescope for solar physics. In 1930 Schmidt invented the Schmidt camera ("Schmidtspiegel"), a telescope with a spherically shaped mirror and a special correction plate (made with a clever "vacuum pan" method); the result was a very wide field of view (15 degrees in diameter) and images on the photographic plates free from optical errors like spherical aberration, coma, and astigmatism. His first camera had an aperture of about 36-cm, and a focal ratio of f/1.75. 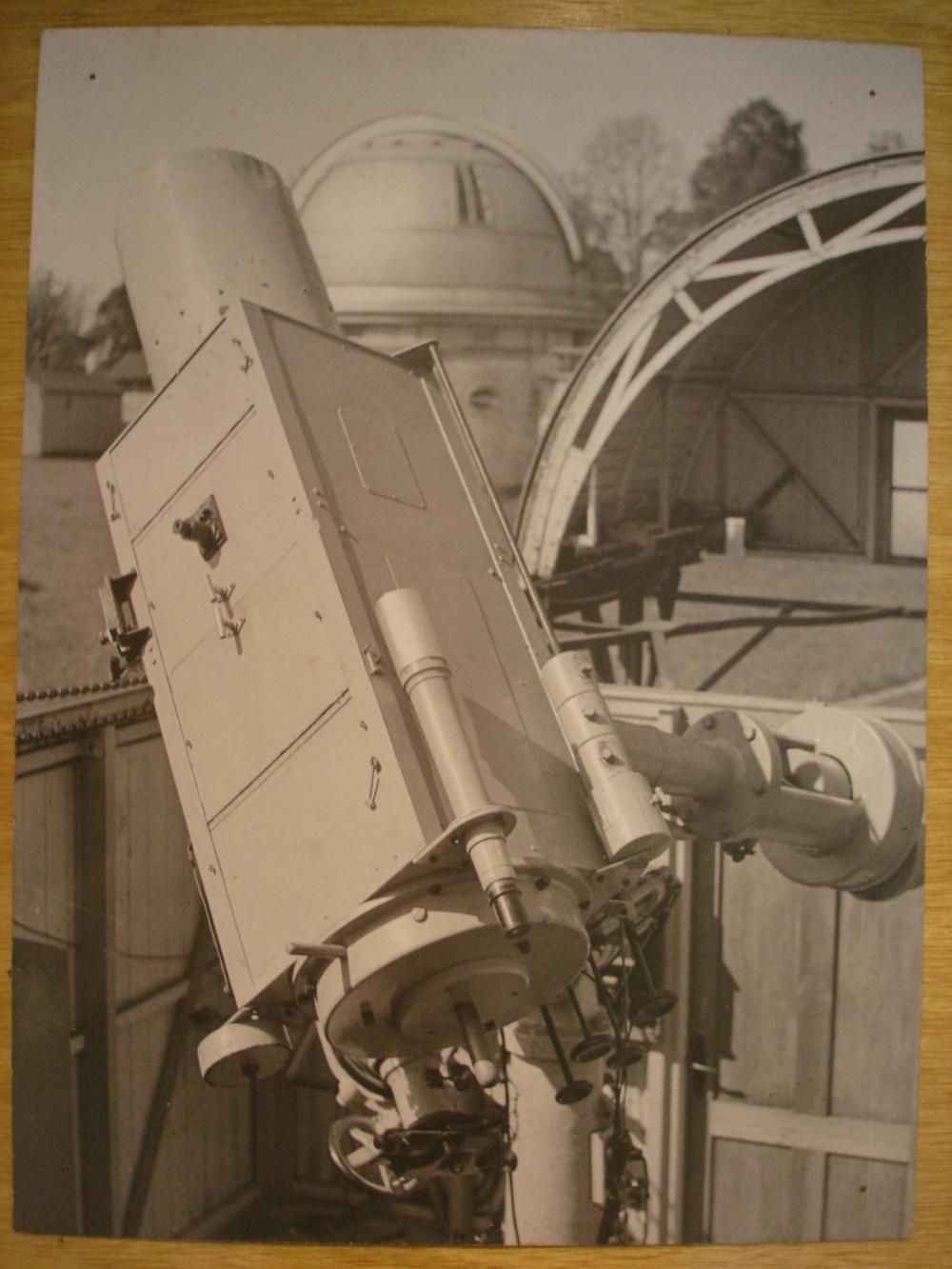 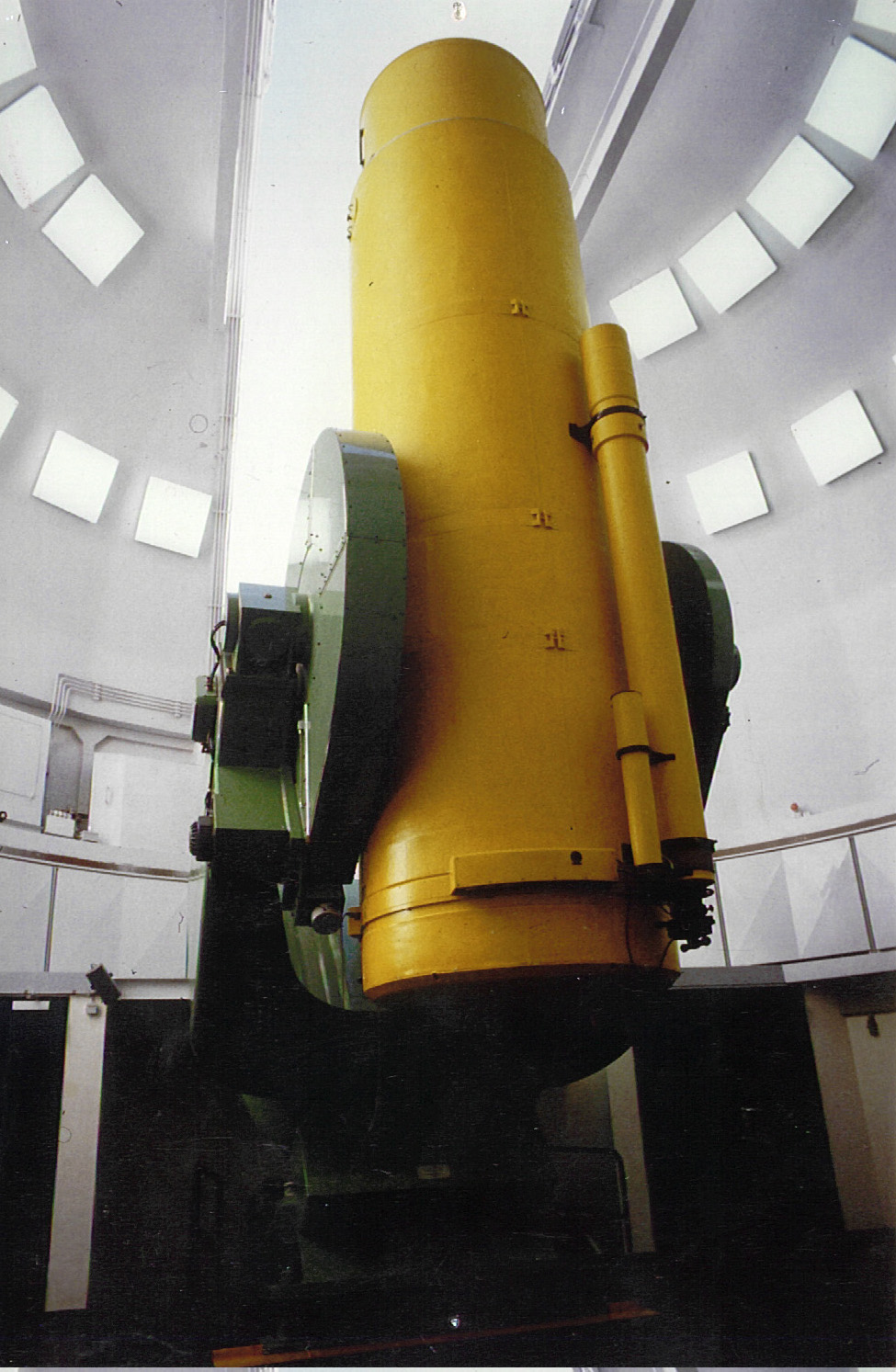 Walter Baade (1893-1960) worked at Hamburg Observatory at Bergedorf from 1919 to 1931 and in 1920 he discovered 944 Hidalgo, the first of a class of minor planets now called Centaurs which cross the orbits of giant planets. Baade used the 1-m-reflecting-telescope for photographic work on clusters, galaxies and nebulae; it was crucial for Baade’s work on his two stellar population theory (Population I and Population II). From 1931 to 1958 he worked at Mount Wilson Observatory having access to the large 2,5-m reflecting telescope. In addition he discovered that two types of Cepheid variable stars exist. Based on this discovery he could announce during the 1952 IAU meeting in Rome that the size of the known universe (Hubble 1929), has to be doubled.

Otto Heckmann (1901-1983) was director of Hamburg Observatory from 1941 to 1962. Besides finishing the AGK2 and starting the multi-national project of AGK3, he turned to cosmology and Einsteins’s general theory of relativity; his book "Theorien der Kosmologie" appeared in 1942. He organised the design and construction of the large 80-cm Schmidt telescope for Hamburg Observatory (1954).
After the WWII he started in the 1950s with Jan Hendrik Oort (1900--1992) the founding of the European Astronomical Observatory (ESO) and La Silla Observatory. Heckmann became the first Director General from 1962 to 1968 with the ESO Headquarters in Hamburg-Bergedorf (today in Garching near Munich). From 1967 to 1970 he also served as President of the International Astronomical Union.

Alfred Weigert (1927-1992) started in Hamburg Observatory in 1968 and Sjur Refsdal (1935-2009) in 1972. These were two outstanding theoreticians who two new florishing topics: Weigert with the theory of stellar evolution and his pioneering work of simulation of the development of stars in the computer and Refsdal with the theory of gravitational lensing; Refsdal had started this theme at a time where no observational evidence existed - now it is a hot topic.

The Czech astronomer Lubov{s} Kohoutek (*1935) started after the Soviet occupation of Czechoslovakia (1968) in Hamburg Observatory (retired in 2001). He became well-known for the discovery of numerous comets, especially 75D/Kohoutek, 76P/West-Kohoutek-Ikemura, and "Comet Kohoutek" (C/1973 E1), minor planets and his catalogue of planetary nebulae.

The Hamburg observatory was equipped with excellent instruments of both kinds, a large double refractor and a large reflecting telescope (1m) -- large for that time. To this day the large refractor with a lens diameter of 60-cm and a focal length of 9-m belongs still to the largest refractors in the world (optics made by Steinheil). It is the last instrument built by the renowned company Repsold, Hamburg, and the second largest still existing. The raising platform developed and realised by Carl Zeiss Jena considerably facilitated the operation of this large refractor; in addition it was the first large one on the European continent. 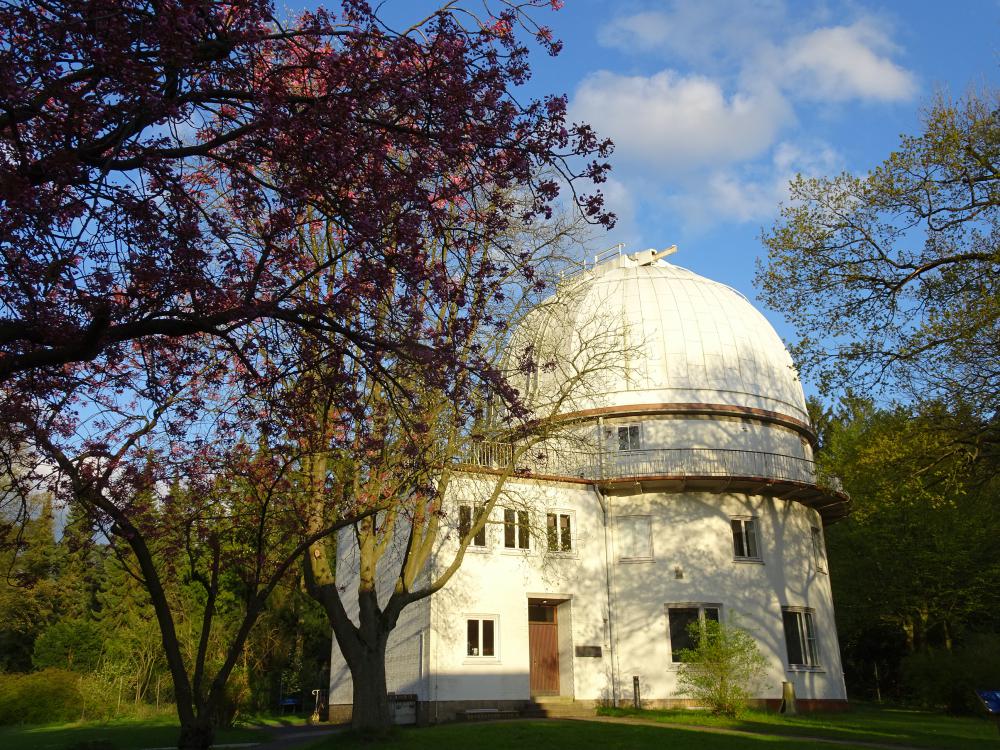 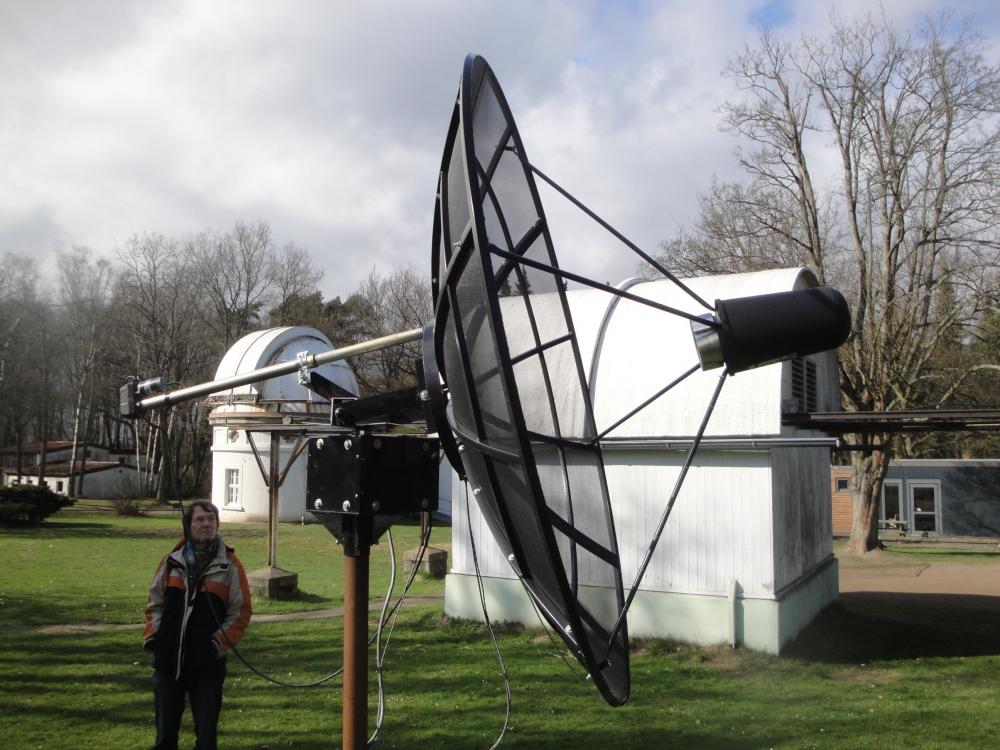 Importance for the history of astronomy or cultural astronomy 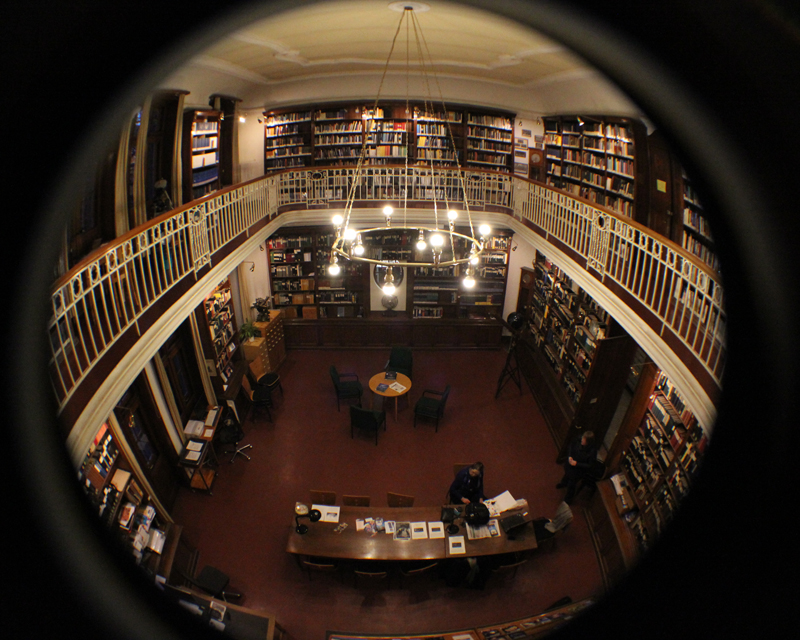 Hamburg Observatory had for a long time a leading position in classical astronomy (astrometry) and time keeping (Hamburg time ball, 1876-1934), but astrophysics (photography, photometry and spectroscopy) and especially solar physics was started by Richard Schorr (1867--1951) around 1900.

Highlights are the introduction of the first large (1-m) reflecting telescope (1911) in Europe after the first three in the USA, and the important invention of the Schmidt telescope in Hamburg Observatory (1930).

Outstanding astronomers were Walter Baade (1893--1960) with the introduction of the two stellar populations and Otto Heckmann (1901--1983) with his emphasis on cosmology and his science organisation work (founding of ESO and first director, president of IAU).

In the second half of 20th century there are the two famous theoretians Alfred Weigert (1927--1992) (theory of stellar evolution) and Sjur Refsdal (1935--2009) (theory of gravitational lesing). With the Czech astronomer Luboš Kohoutek (*1935) Hamburg Observatory became well-known for the discovery of numerous comets, minor planets and his catalogue of planetary nebulae.

Hamburg Observatory has been completely preserved, both as far as the grounds (7 ha astronomy park) with their historic buildings and furnishings and the optical instruments and their technical details are concerned. Therefore, in 1996 the observatory was inscribed in the monument list of the Free and Hanseatic City of Hamburg as an ensemble on the basis of its relevance for the city’s history as well as its cultural and scientific history. In 2008 Hamburg Observatory was declared a cultural monument of national importance. 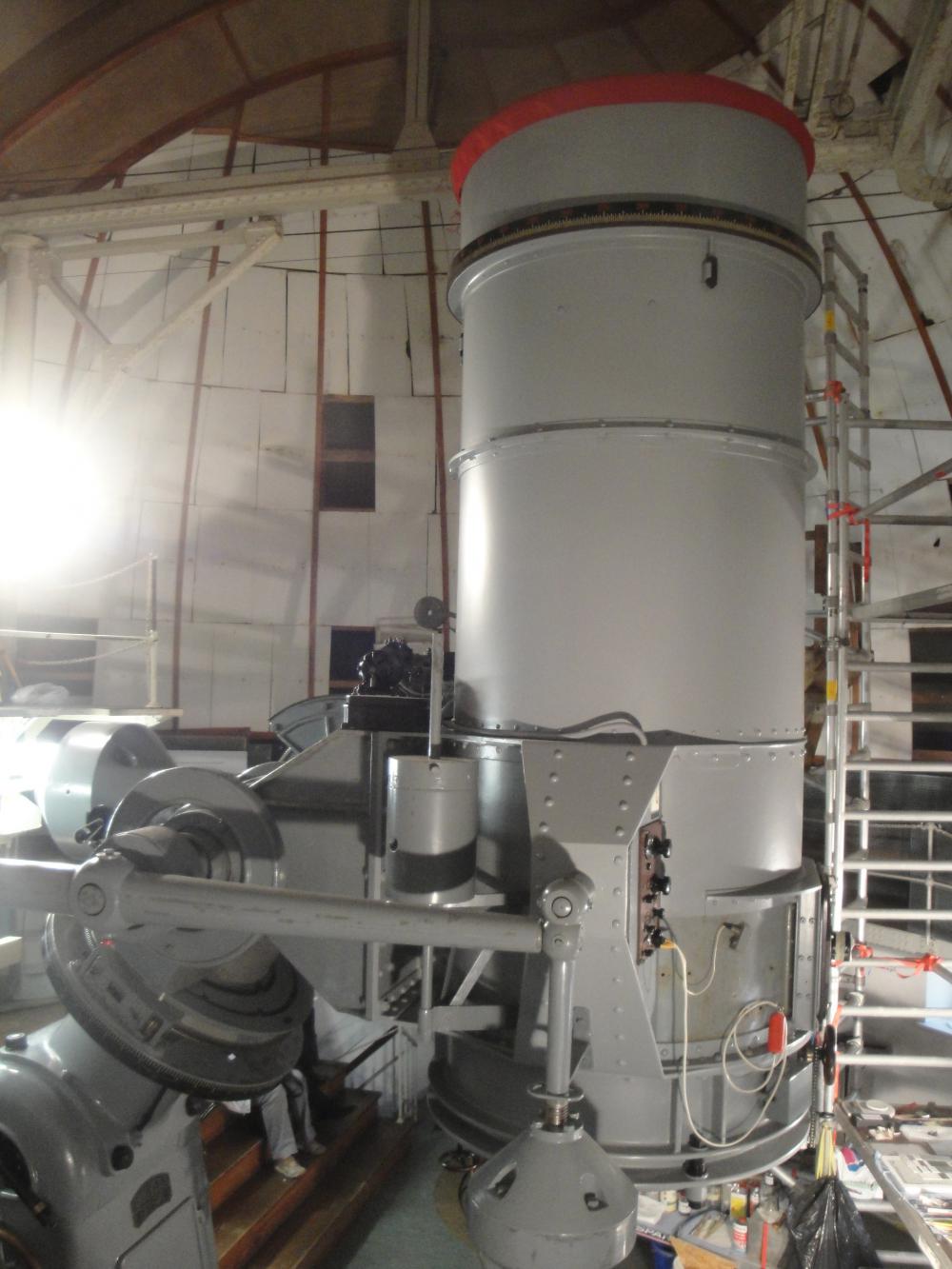 The restoration goes on step by step:

Hamburg Observatory did not choose a central building with the three domes on the top like the typical architecture was in the 19th century (Pulkovo Observatory), but the new idea of layout, the astronomy park, was used like in Nice, Strasbourg, Remeis Observatory Bamberg, La Plata, Kazan, and Heidelberg-Königstuhl (which is much smaller). In Hamburg the astronomy park is realised with a strict separation of observatory domes on one side and the main building with the library and administration, the director’s villa, homes for astronomers, office buildings and the workshop on the other side. 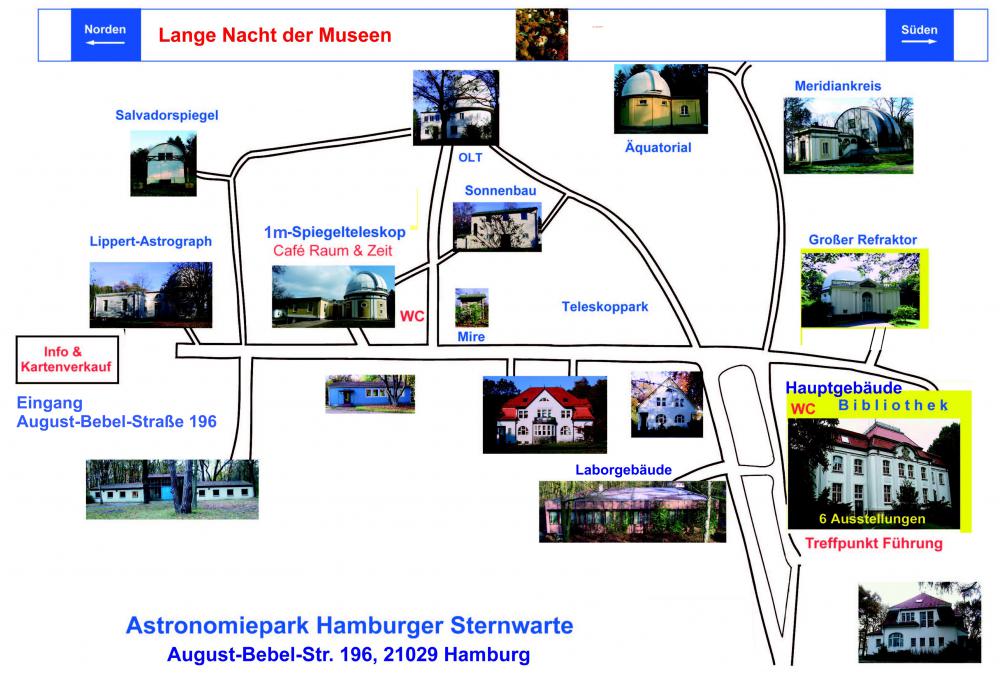 In this way Hamburg Observatory can be seen as a model observatory for the beginning of astrophysics because of the site (astronomy park, hill at the outskirts of the city) but also because of the instrumentation, especially the choice of a modern reflecting telescope (in addition astrographs, spectroscopes and solar physics instruments), well suitable for astrophysics, besides the instruments for classical astronomy like the meridian circle and the refractor. Finally the Schmidt telescope, an important and influential invention for astrophotography, was made in Hamburg Observatory; now one can find Schmidt telescopes all over the world. In addition Hamburg served as a model for Mérida Observatory in Venezuela with the whole instrumentation, meridian circles, refractors, reflecting telescope, but also a Schmidt telescope.

Similar observatories around 1900 showing the transition from astronomy to astrophysics (more or less) are the following -- the best fitting partner is La Plata:

so far no threats. The observatory is in a neighborhood of villas; there are no factories or industry nearby. The cemetary is next to the observatory, then there is the border of Hamburg, and behind there is farmland only (Vier- und Marschlande), where vegetables and fruits for Hamburg are produced. There is also not much light pollution; the city electrical lights are dimmed near the observatory, only in the direction of the city of Hamburg in the west, one cannot observe.

In addition there is café and restaurant and a visitor center in the 1-m-telescope-building, offering guided tours every weekend.

Then there is a Montessori School in the Lippert building.


Besides the historical instruments in Hamburg Observatory, especially the OLT is still used for science, there are telescopes in Calar Alto, Spain (80-cm-Schmidt telescope, since 1975):
https://www.physik.uni-hamburg.de/en/hs/campus/telescopes.html

And in addition Hamburg astronomers can get observing time at international observatories like ESO or ALMA (radio interferometer in the mm-range) in Chile, and for satellites like (e.g. HST, X-ray like XMM-Newton and IR telescopes like SOFIA, and Planck satellite for mapping of the cosmic microwave background) and in the future the 30-m-ELT (Extremely Large Telescope, ESO) or James Webb Space Telescope (WEBB/JWST, NASA).

Hamburg Observatory is also teaching within the Department of Physics and offers the training and the range of lectures and seminars on astronomy/astrophysics for undergraduates and graduates, as well as for B.Sc./M.Sc. and PhD students (Research Training Group, "Graduiertenkolleg"). In addition lectures for the general public are presented or astronomy workshops and holiday courses for school children.


Publications about special Instruments (including restoration) and Models

Publications about Bernhard Schmidt and the Schmidt telescope