In the Benediktine monastery Kremsmünster (the description is based on the comprehensive study of Klamt 1999) in the 18th century the idea came up to start with astronomical observations; according to the first plans the observatory should be installed above the bridge gate; even the wooden architectural model has been preserved. 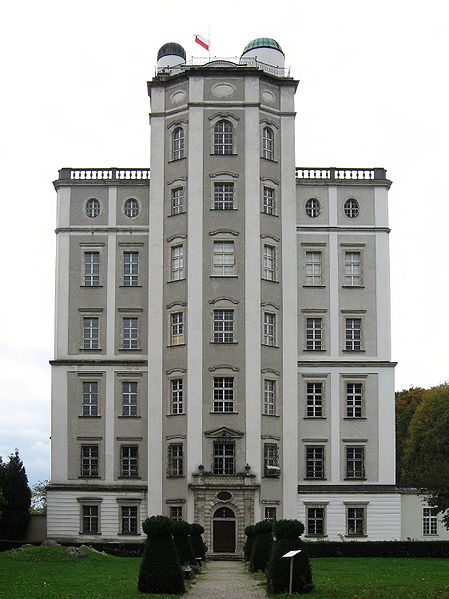 In 1748 the very ambitious decision was made to erect a fully free-standing nine-storey tower building (50m high) in the garden, finished in 1758. In art history it is described as one of the historical beginnings of modern highrise building architecture, the highest building of that time - apart from real towers.

The meridian line of Kremsmünster was observed in the second half of the 19th century as the central part of a central European meridian line from Prussia to the Adriatic Sea and thus formed a 660 km long line on the former territory of Holy Roman Empire of German Nation. Such long surveying networks have been used by astronomers and geodesists since about 1800 to determine the exact Earth figure.

The weather room ("Wetterkammerl") offers meteorological observations since 1762 up to the present day -- the only one with 230 years of observation without a change in location. This long time of observation can be only compared with Mannheim or Stockholm.

There are also impressive cabinets of rarities, structured into the main categories naturalia and artificialia: The institution is not only an observatory but an important step in the history of museums and one of the first preserved museum buildings which originates really from baroque time. The museum’s collection was intended to present the large variety of the world, a microscopic image of the macrocosmos.

All these activities show, that the Benedictines were open-minded to new developments in science and art (Demel 2000, S. 150)

This observatory is an outstanding example of baroque science, including all kinds of natural science, astronomy as well as geo science, seismology and meteorology. The integrity of the building and the completeness of instruments is astonishing and remarkable. The observatory with the museum shows an integral picture of scientific practice of baroque time, practically not changed until today, as well as the close connection of science and religion.

The impressive building, the fully free-standing nine-storey tower, was erected in the garden, finished in 1758. Already the name Mathematical Tower points out the strong link between astronomy and mathematics, which is valid until the middle of the 19th century when astrophysics started.

An interesting architectural feature is the pendulum shaft (1764, height 54m, diameter 135cm) for experiments with falling bodies; it could also be used as an astronomical well for seeing stars at daylight, an idea already existing since the ancient world.
Also a meridian line was added in 1765; near the southern mural quadrant the sun hole can be found. In baroque time one wanted to maeasure the length of the solar year in order to check the Gregorian calendar.

Already in 1851 a Foucault pendulum was installed there.
Later in 1906 a special meridian circle building was erected in the garden, equipped with a meridian circle made by Repsold of Hamburg; the decision was made after the director visited in 1905 the famous observatories of that time: Prague, Leipzig, Berlin, Potsdam, Kiel, Hamburg, Bonn, Heidelberg, Strasbourg, Munich, Kopenhagen, Leiden, Bruxelles and Liège.

The institution is not only an observatory but an important step in the history of museums and one of the first preserved museum buildings which originates really from baroque time. The museum’s collection was intended to present the large variety of the world, a microscopic image of the macrocosmos. These  early cabinets of rarities are structured into the main categories naturalia and artificialia (Wolfschmidt: Popularisierung der Naturwissenschaften, 2000).

The idea for this "universal" comprehensive museum in Kremsmünster was to guide the visitor from inanimate nature (minerals and fossils on the second floor) to lower living nature -- zoology and botanics (plants and animals), then to human sciences and arts (art chamber and picture gallery on the third and fourth floor), Tassilo chalice  (777).

In the sixth floor, representing the cosmos, you yan find the large observatory hall with physics and astronomy. The astronomy collection includes an astronomical table (1590), several terrestrial and celestial globes, sundials, the observatory pendulum clock made by Kessels of Altona (Nr. 1448), many astronomical instruments, including an iron sextant which was probably used by Kepler in Prague. This collection of all kinds of scientific instruments of 18th century is very remarkable. The large azimuthal quadrant made by J.B. Illinger after Brander’s famous azimuthal quadrant (Augsburg 1754) was used in the observatory in the sixth floor. Later the new meridian circle made by the k.,k. Polytechnical Institute of Vienna, 19th century, was used in the fifth floor. Three sculptures in the staircase, Ptolemy, Tycho Brahe, and Kepler, represent the progress in our world view.

Finally in the seventh floor was the chapel (reflection of God). In the academic chapel there are three portraits:
- Abbot Alexander Fixlmillner (1731--1759), architect of the observatory,
- Pater Nonnos Stadler (1696--1783), founder of the observatory and academy (the knights academy "Ritterakademie" existed from 1743 to 1789 and raised the interest in science and especially astronomy),
- Johannes Illinger (1733--1800), mechanician and instrument maker of the observatory.
In addition two wooden architectural models of the observatory made by Father Anselm Desing (1699--1772).

Another important feature is the weather room ("Wetterkammerl") which offers meteorological observations since 1762 up to the present day -- the only one with 230 years of observation without a change in location (Temperature, barometric pressure, wind direction, weather characteristics were recorded in the NNE-window in the first floor of the observatory; since 1784 in addition atmospheric humidity. Instruments: e.g. vane, thermometers, hygometer and hair hygrometer (Saussure), barometer (Hg) Josef Halbl, Wels, 1705.

Besides the observatory on the sixth floor there was also a station for magnetic research, a geophysical observatory (1836), founded in the context of the international ``Magnet Association’’, founded in 1833 by Gauß and Weber in Göttingen. In 1897 seismological measurements were started in addition (recording of earthquakes).

The meridian line of Kremsmünster was observed in the second half of the 19th century as the central part of a central European meridian line from Prussia to the Adriatic Sea or assembled from older measurements. Such long surveying networks have been used by astronomers and geodesists since about 1800 to determine the exact Earth figure.

Later, the chain was extended beyond Upper Austria - 250 kilometers to the north (Bohemia) and to the south (Styria "Steiermark" and Carniola "Krain") and thus formed a 660 km long line on the former territory of Holy Roman Empire of German Nation. With this hitherto longest meridian line Großenhain-Kremsmünster-Pola, the Vienna Military Geographical Institute and the Central European Arc Measurement Commission ("Gradmessungskommission") planned to determine the exact shape of the earth and an astro-geodesic geoid profile.

In the north, the meridian line was continued by the Saxon-Prussian State Survey (Royal Prussian Geodetic Institute) for about 70 km and sometimes referred to as the Berlin Meridian. It ran from the Bohemian border over Dresden to Großenhain (Saxony), where the astronomical endpoint was built. The southern end point was formed by the Austrian naval observatory Pola on the Istrian coast, which later became internationally known through the asteroid discoveries of Johann Palisa.

The building and the collections are well preserved.

The architecture of this observatory is unique for the baroque time.
There exist several baroque tower observatories, but these are mostly towers of churches, where at the top is the observing room and / or platform (Clementinum Prague 1722, Zwehrenturm in Kassel 1710, Mathematical Tower of the University Breslau / Wroclaw, 1730, observatory since 1790, Old Vienna University observatory - tower on the top 1755, Osservatorio Astronomico di Brera of the Jesuits in Milano 1762, Mannheim observatory 1772).

Until the early 20th century it was used as an observatory.
Now it is used as a museum and there are activities as a public observatory. It is still used as weather station.

There is no modern astronomical research done.