Nuremberg was already famous in respect to astronomy since the end of the Middle Ages. Nikolaus von Kues [Cusanus] (1401--1464) bought in 1444 his instruments in Nuremberg; they are now in the Bernkastel-Kues. In 1471 Regiomontanus [Johannes Müller] (1436--1476) came to Nuremberg, which he named as "quasi centrum Europae"; he used the roof of his house as observing post and opened a workshop for making instruments and a printing and publishing house. Later his scholar Bernhard Walter (1430--1504) erected a first "observatory" (he added a small platform for his movable instruments in the gable window) in the house, where the painter Albrecht Dürer (1471--1528) lived and worked (Zistelgasse, today Albrecht-Dürer-Straße 39) and measured detailed positions of comets, planets and stars with his armillaray sphere.

Nicolaus Copernicus’ "De revolutionibus orbium coelestium" was printed in the "Offizin" (printing and publishing place) of Johannes Petreius (1497--1550) in Nuremberg (Ölberg 9, Obere Schmiedgasse 10) in 1543. Nuremberg was a center of printing already since the end of the 15th century. In 1470 Anton Koberger (1440--1513) opened his "Offizin", where the Weltchronik (1493) of Hartmann Schedel (1440--1514) was printed. Tycho Brahe’s "Astronomiae instauratae mechanica" was printed by Levinus Hulsius in 1602. 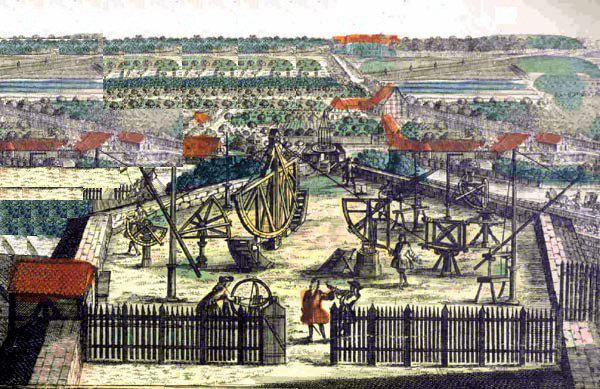 Eimmart’s remarkable instruments, most of them he made by himself: 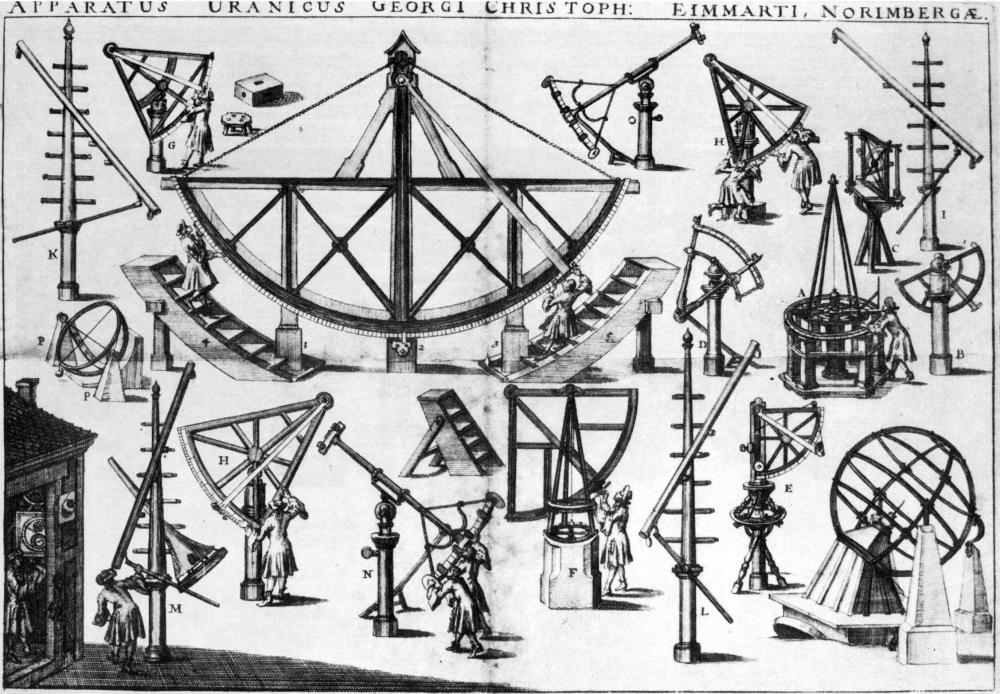 A planetarium made by Johann Ludtring (1628--1688): In 1680 an orrery (planetarium) "Sphaera armillaris" was made for Georg Christoph Eimmart by the Nuremberg mechanicus and compass maker Johann Ludtring (1628-1688). In the wooden base is an driving gear made of iron; the armillary sphere is made of gilded brass. This heliocentric model of the solar system was described by Johannes Christoph Sturm (1635--1703) in his publication "Sphaerae armillaris" (Altdorf 1695), after two Nuremberg merchants acquired the model in 1690 for the enormous sum of 300 guilders (200 thalers) for the University of Altdorf. In 1711 the orrery was erected in the observatory there. 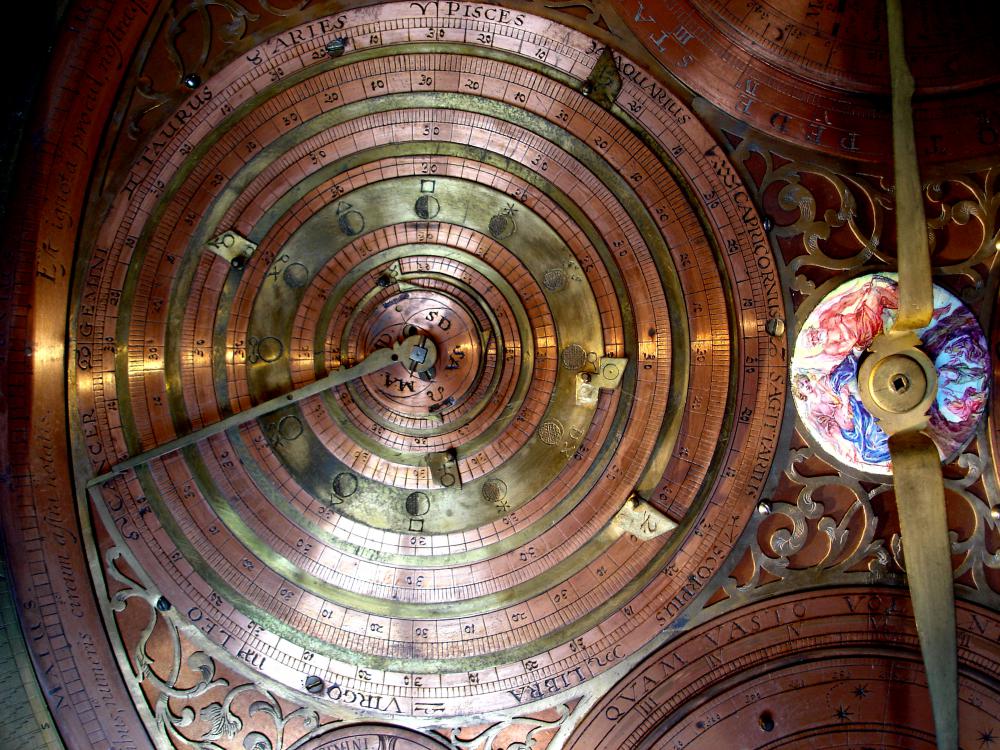 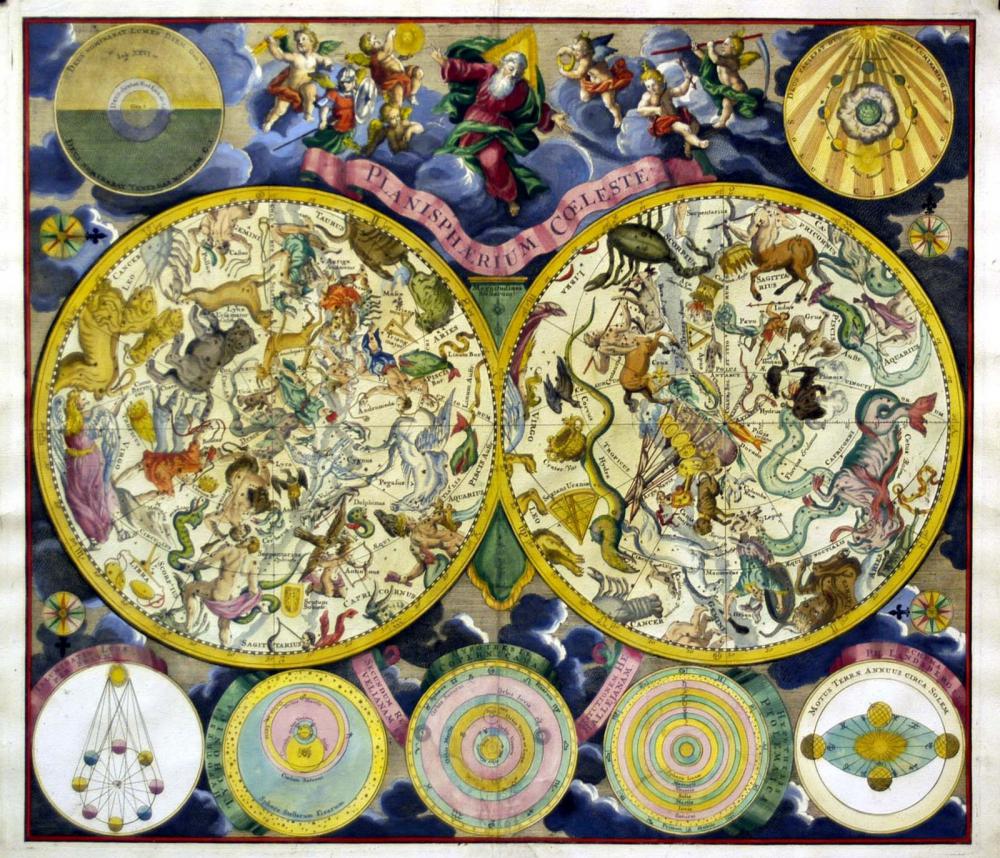 Johann Jacob Sandrart (1630--1708) published flysheets of the large comet of 1680 above the Eimmart observatory (Der große Komet von 1680 über der Eimmart-Sternwarte); and again in 1682 (for Halley’s comet) -- a detailed representation of the observatory with all the instruments and Eimmart is observing with a telescope.

Eimmart’s daughter Maria Clara Eimmart (1676--1707) was an early woman astronomer, who was observing the moon in a very detailed way from 1693 to 1698; she painted the moon phases in 250 sketches; some of them have survived in the Museo della Specola, Bologna. In addition she observed the total solar eclipse in May 12, 1706. In January 1705 she married Johann Heinrich Müller (1671--1731), who was assistant in the observatory since 1687. She died already in puerperium in 1707.

Eimmart’s observatory was not so much a place for research but a place for teaching astronomy. Many assistants, who lived in his home, were educated here and this instruction in mathematics, observational astronomy and geography was the basis for becoming later important in the field of astronomy or cartography.

The observatory was internationally recognized; In 1699 Eimmart became member of the "Academie des Sciences" in Paris and in 1701 of the Prussian Academy of Sciences.

Eimmart’s observatory was the first public observatory (observation of lunar eclipses and of the total solar eclipse 1706) -- perhaps worldwide, he was an early "populariser of science". 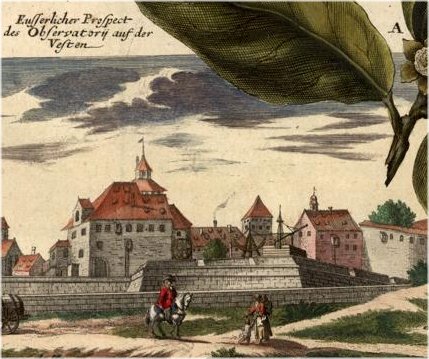 Georg Christoph Eimmart (1638--1705), born in Regensburg, studied since 1655 mathematics in Jena, supervised by professor Erhard Weigel (1625--1699), who had erected an observatory on the roof of the  "Collegium Jenense" 1655 -- may be Eimmart was already here inspired to be interested in astronomy. Eimmart earned his money with cartography and published a number of maps. In 1690 Eimmart published the "Planisphaerium Caeleste", a celestial map of the nothern and southern sky with additional informations. In 1704 he started with globe making. The positions of the stars were based on epoch 1700 and were taken from Hevelius’ "Prodromus Astronomiae" (1690). 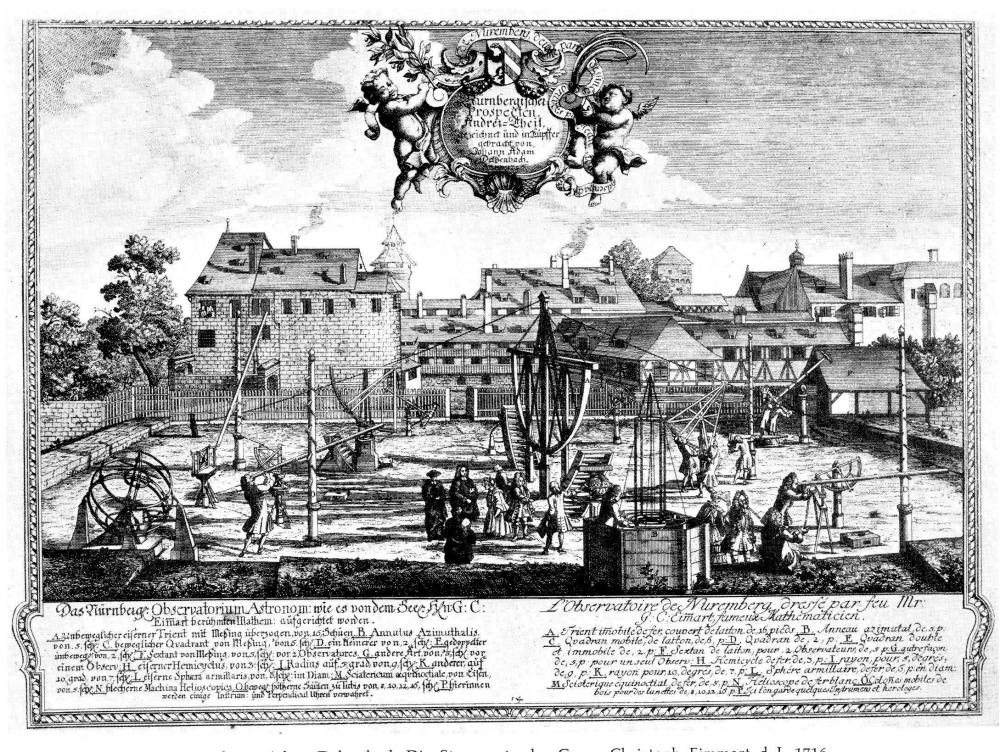 In 1678 Eimmart founded his private observatory on the bastion Vestnertor on the north side of the Nuremberg castle and observed there for 26 years. In 1699 Eimmart became director of the art academy was founded in Nuremberg in 1662 by Jacob von Sandrart (1630--1708), which is the oldest art academy north of the alps.

After his death in 1705 the City of Nuremberg acquired the observatory and Eimmart’s son-in-law Johann Heinrich Müller (1671--1731) was appoited as director; he was already from 1687 to 1692 assistant at the Eimmart’s observatory. From 1692 he studied mathematics in the University of Altdorf, 1697 in Giessen and 1699 in Tübingen. In 1705 he became professor of mathematics at the "Gymnasium" Aegidianum, a high school which prepared for the university. In 1710 he got a call as professor in Altdorf university and director of the observatory (Altdorf is at the outskirts of Nuremberg). 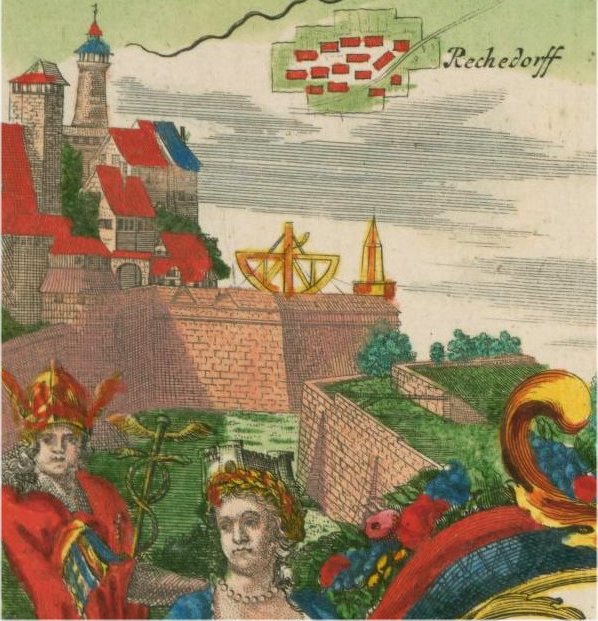 The 3rd director, since 1710, was Johann Gabriel Doppelmayer (1677--1750), very talented astronomer and cartographer, but not interested in instruments. He was in close contact to the cartographer Johann Baptist Homann (1664--1724), who had founded a printing and publishing house for maps and globes in Nuremberg (Fembo house, Burgberg, today City Museum) in 1702. Doppelmayer (1707, S. 21f.) constructed a map showing the path of the total solar eclipse through Europe (and Nuremberg) in 1706, which was very successful. Thus Homann started to be interested in astronomy and published star charts and "Atlas novus coelestis" (1742). Since 1728 Doppelmayer also published together with the copper engraver Johann Georg Puschner d.Ä. (1680--1749) terrestrial and celestial globes (diameters 10, 19,5 and 32cm), which can be found in different museums today.

After Doppelmayer’s death in 1750, Georg Moritz Lowitz (1722--1774), son-in-law of Tobias Mayer (1723--1762) and director of the Gymnasium Aegidianum, was appointed as director, but he decided that the instruments were in too bad condition due to this open air observatory, suffering from wind and weather. Only the valuable small instruments like Eimmart’s "Kunstuhr" (clock) and Copernican orrery were protected in huts. He tried to revitalize the observatory, but in vain; the observatory stopped its activities in 1757.

Georg Friedrich Kordenbusch (1731--1802), 1769 professor of mathematics and physics at the Gymnasium Aegidianum, tried in vain to rebuild the observatory but the city of Nuremberg was no longer willing to finance it (Gaab 2003). He observed the transit of Venus in 1761 with a Gregory reflecting telescope from the roof of the Toplerhaus.

Assistants of the observatory

The bastion is still there, but the observatory is no longer existing, but on the place of the former observatory (Vestnertorbastei) a monument was erected in 2007 memorating Georg Christoph Eimmart (1638-1705), the founder of the observatory and first director. 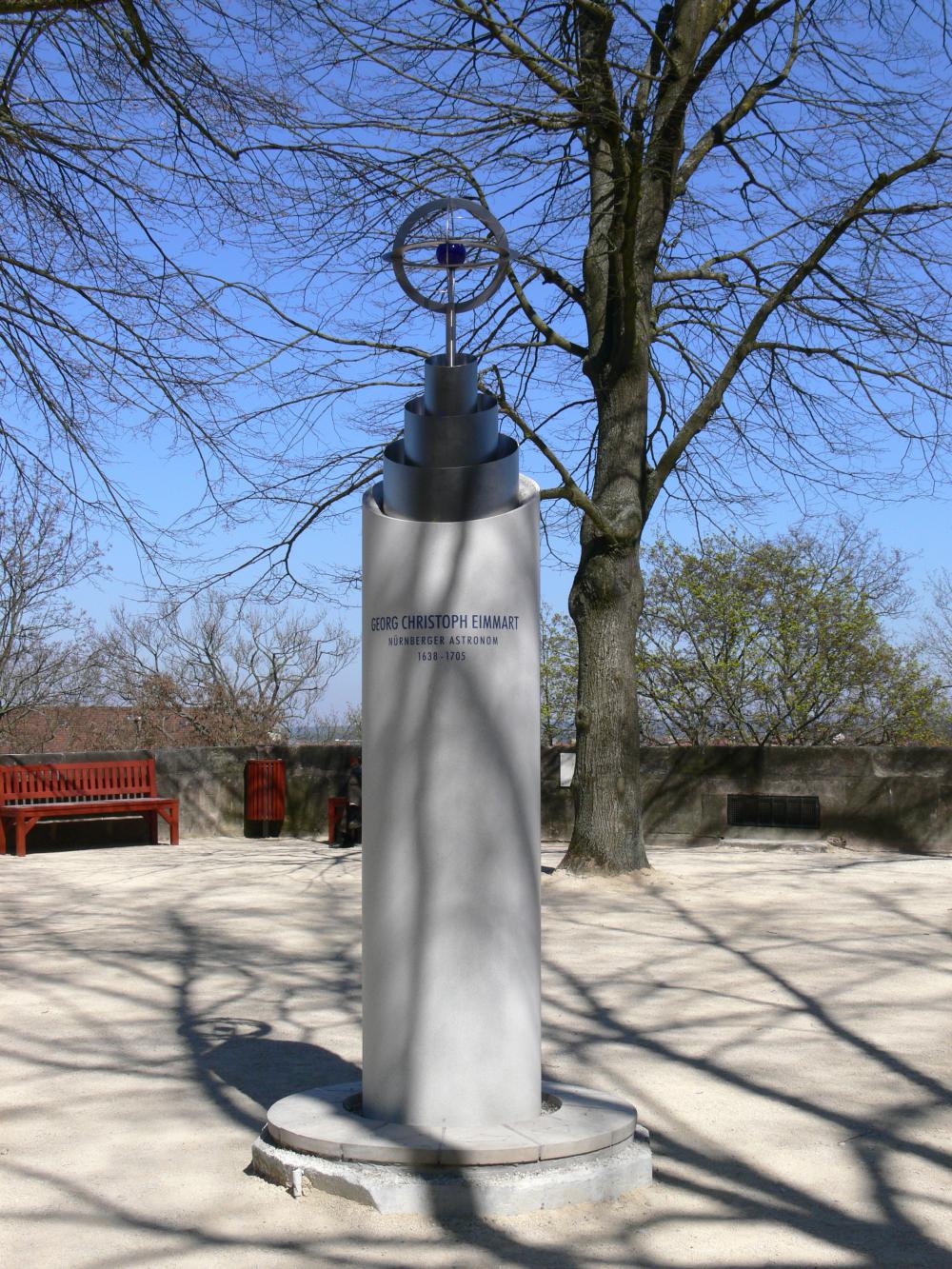 A quadrant is in the Germanisches Nationalmuseum (GNM).
A model was made by M. Nelkenbrecher (Nürnberger Astronomische Arbeitsgemeinschaft). 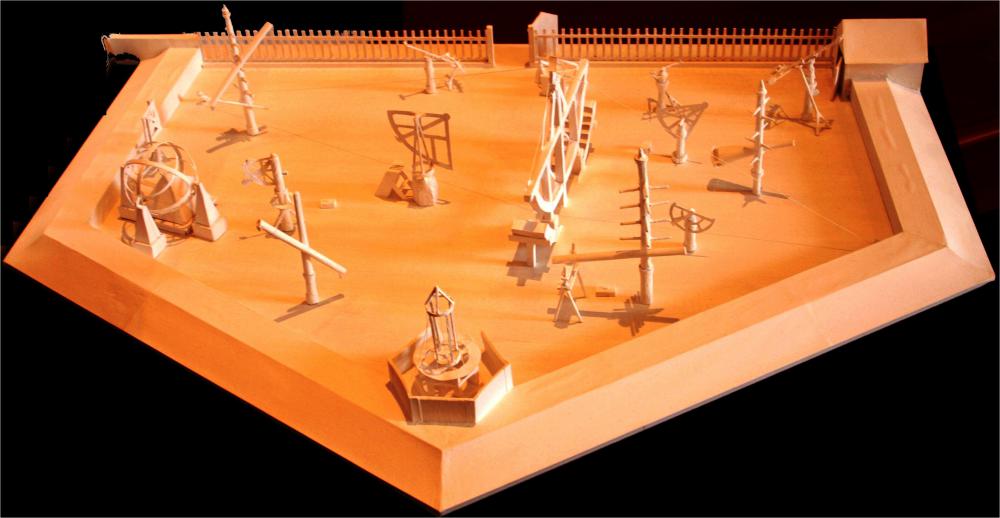 Fig. 10. Model of Eimmart’s observatory on the bastion of Nuremberg castle (model was made by M. Nelkenbrecher, Nürnberger Astronomische Arbeitsgemeinschaft)

Eimmart was influenced by Johannes Hevelius (1611--1687) -- not only concerning the instruments -- but also in planning his observatory. Both used a large platform, Hevelius constructed the platform on the roof of three houses, Eimmart used the large bastion of the castle. 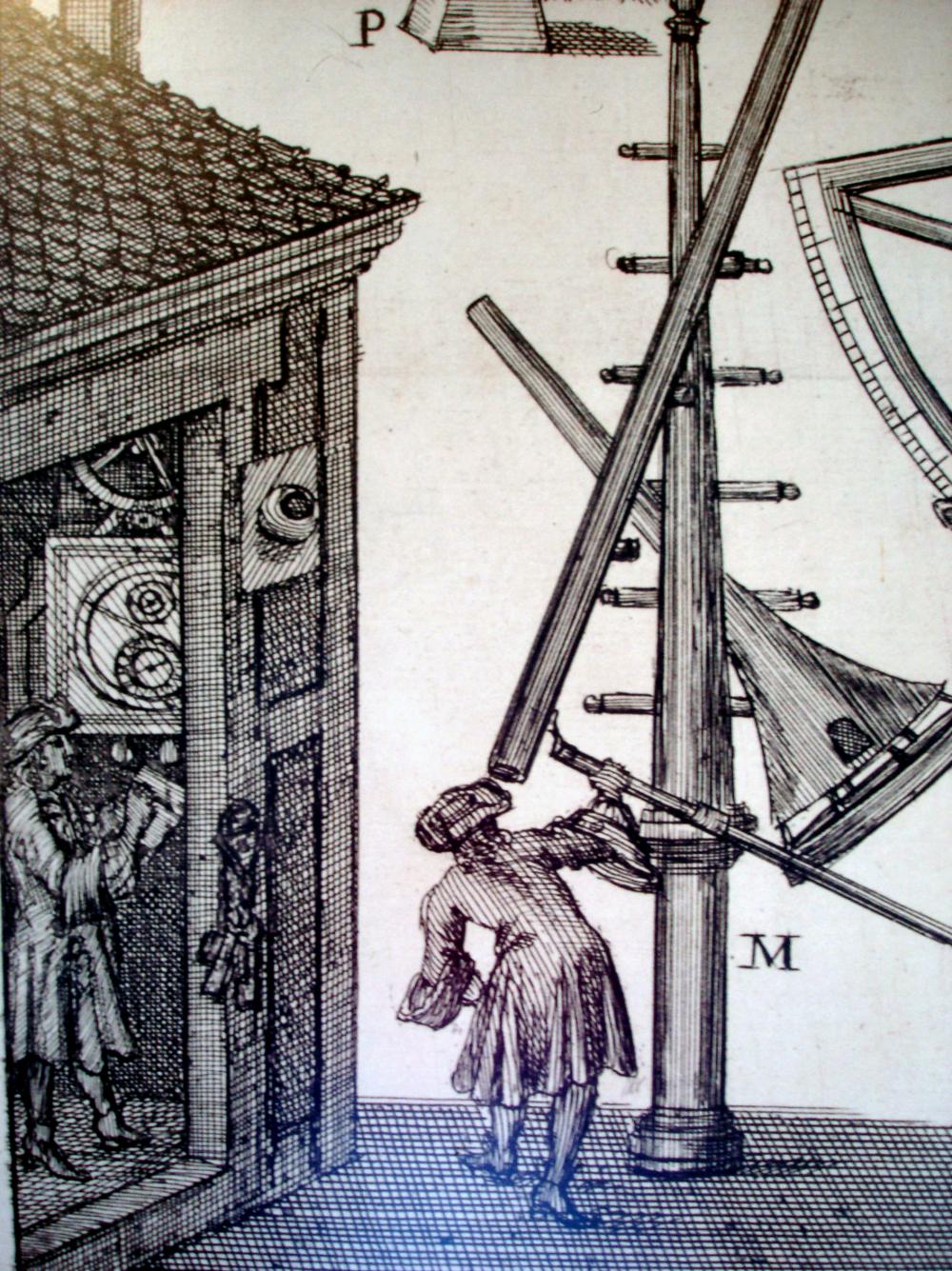 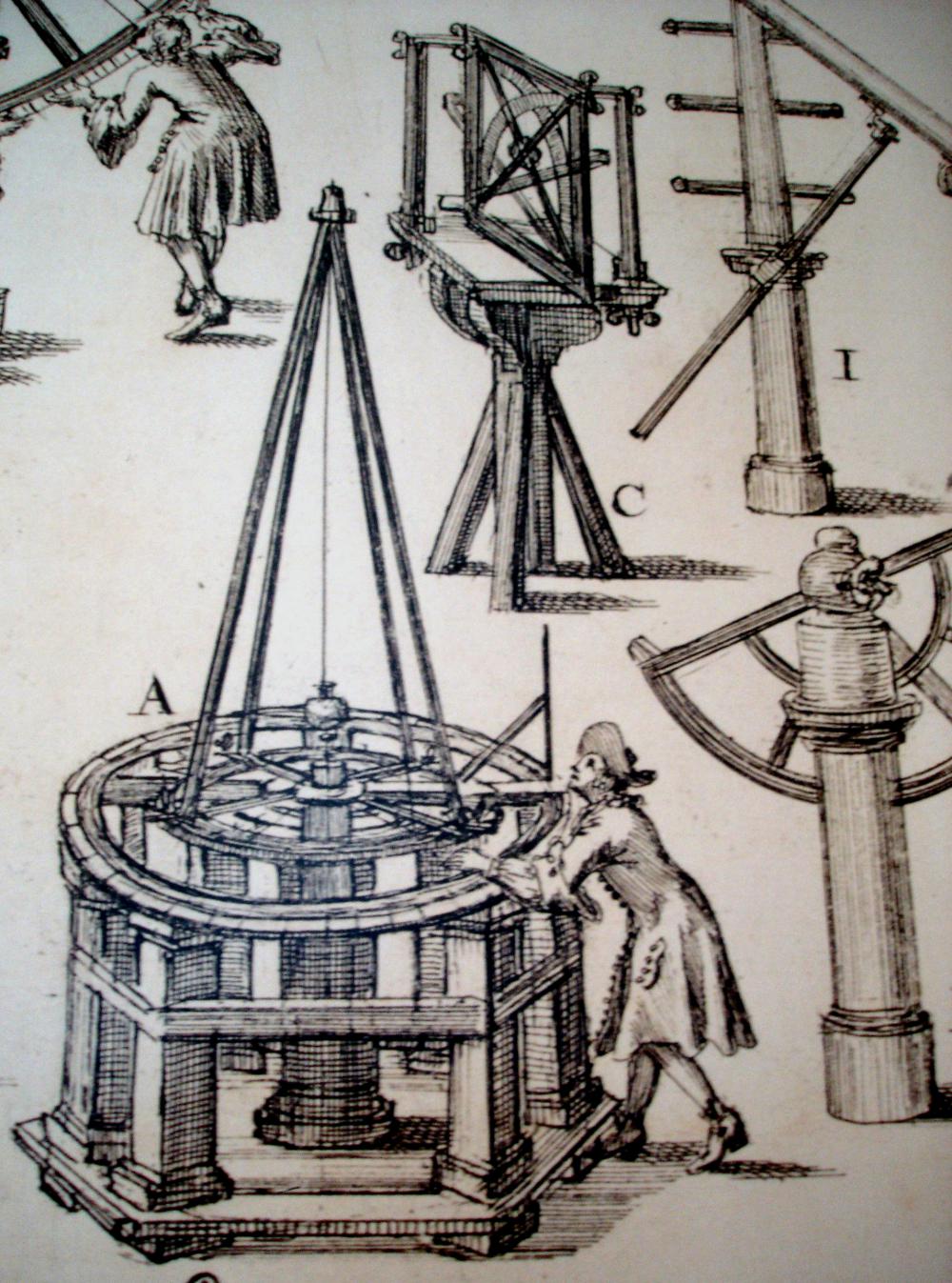 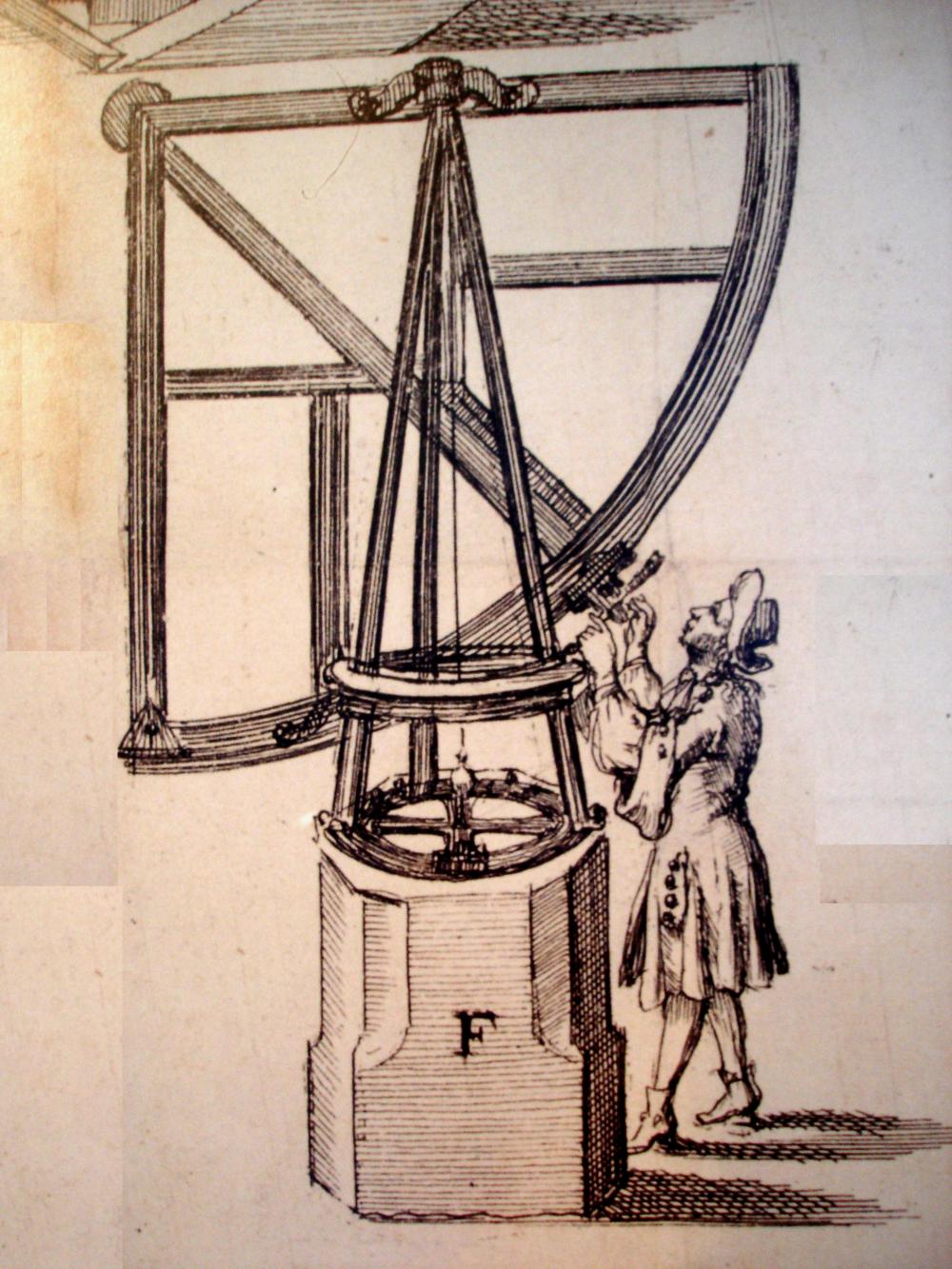 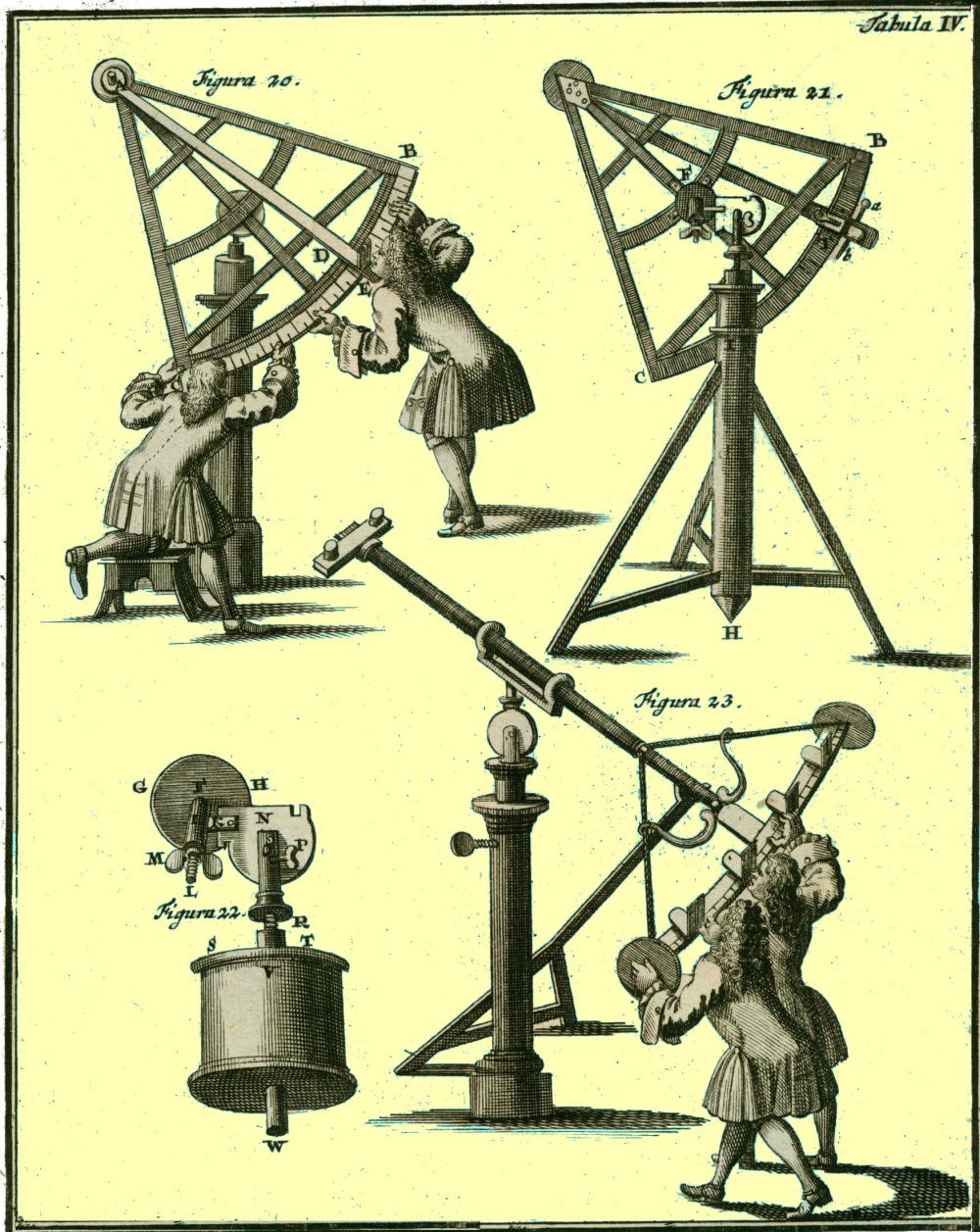 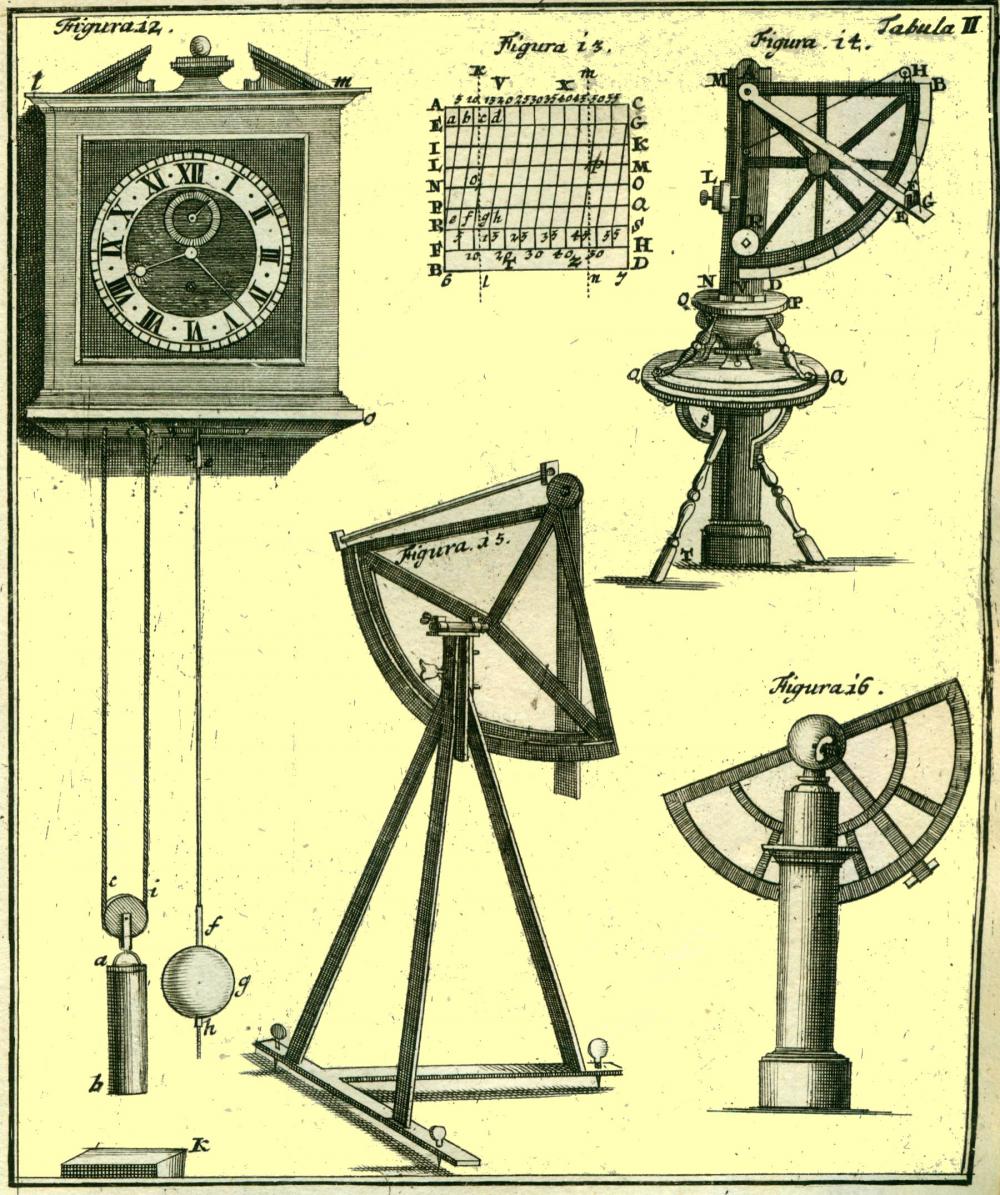 Wurzelbau’s student Johann Leonhard Rost (1688--1725) continued his work as an observational astronomer and published his "Astronomisches Handbuch" (Astronomical handbook) in 1774. There he described some instruments of Eimmart and Wurzelbau in detail. Many of these instruments show a greater or lesser impact from Hevelius -- his publications were known to Rost and Wurzelbau and Hevelius was often quoted in their works. Both towers of the observatories in Nuremberg and Gdansk had an octagonal floor plan and are topped by a pyramid-shaped metal roof. Windows in the wall and roof hatches can be opened in the desired direction.

Peter Kolb (1675--1726), in 1696 assistant of Eimmart, studied in Halle at the Saale (dissertation: "De Natura Cometarum", 1701). On behalf of Bernhard Frederick Baron of Krosigk (1656/60--1714) his secretary Kolb was sent in 1705 to South Africa; there he set up an observatory at the Cape of Good Hope taking Nuremberg as a model (Markus 2012). Kolb stayed until 1712 and determined the latitude and longitude of Cape Town and made meteorological and astronomical observations as well as magnetic measurements of the declination. 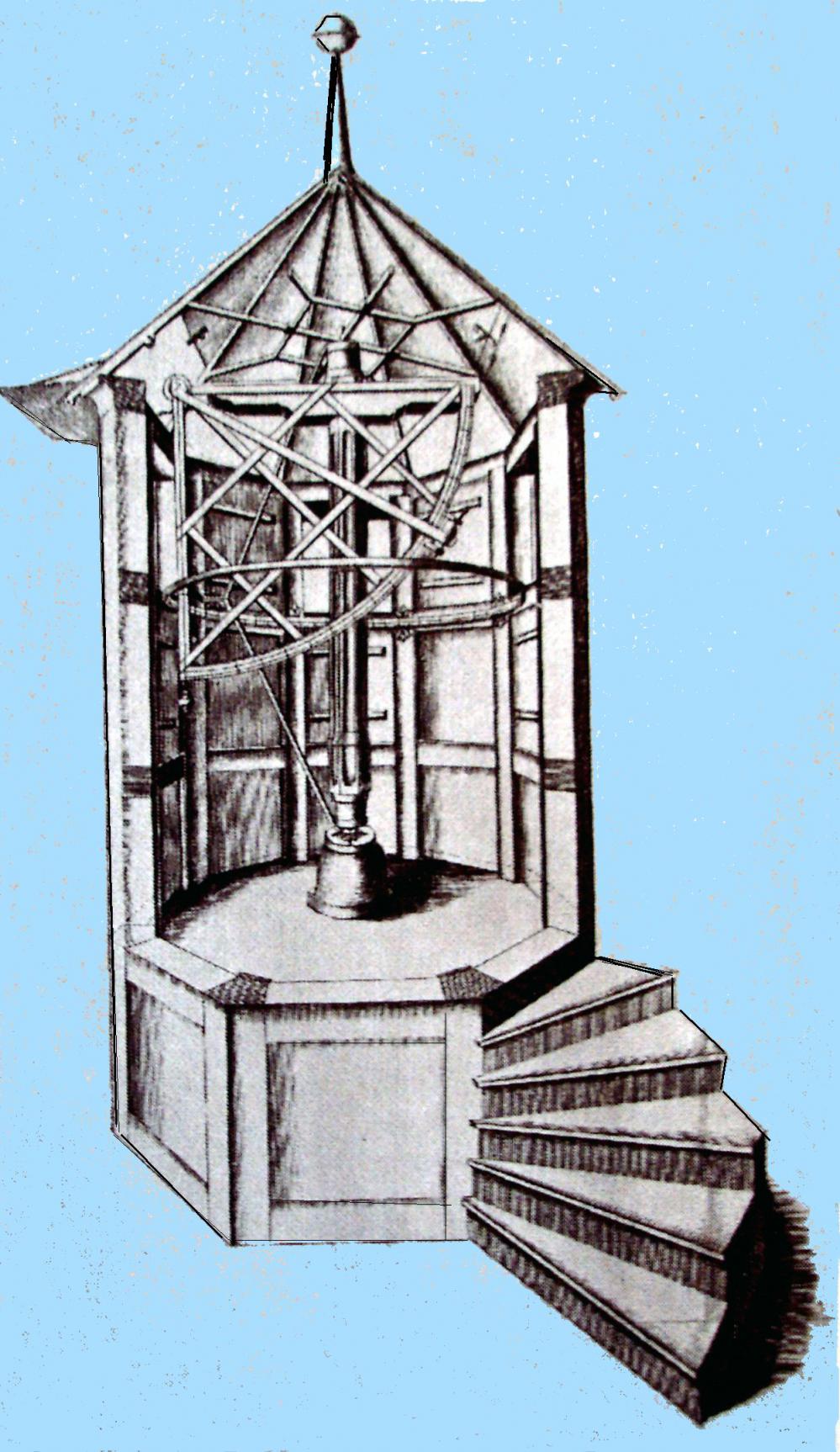 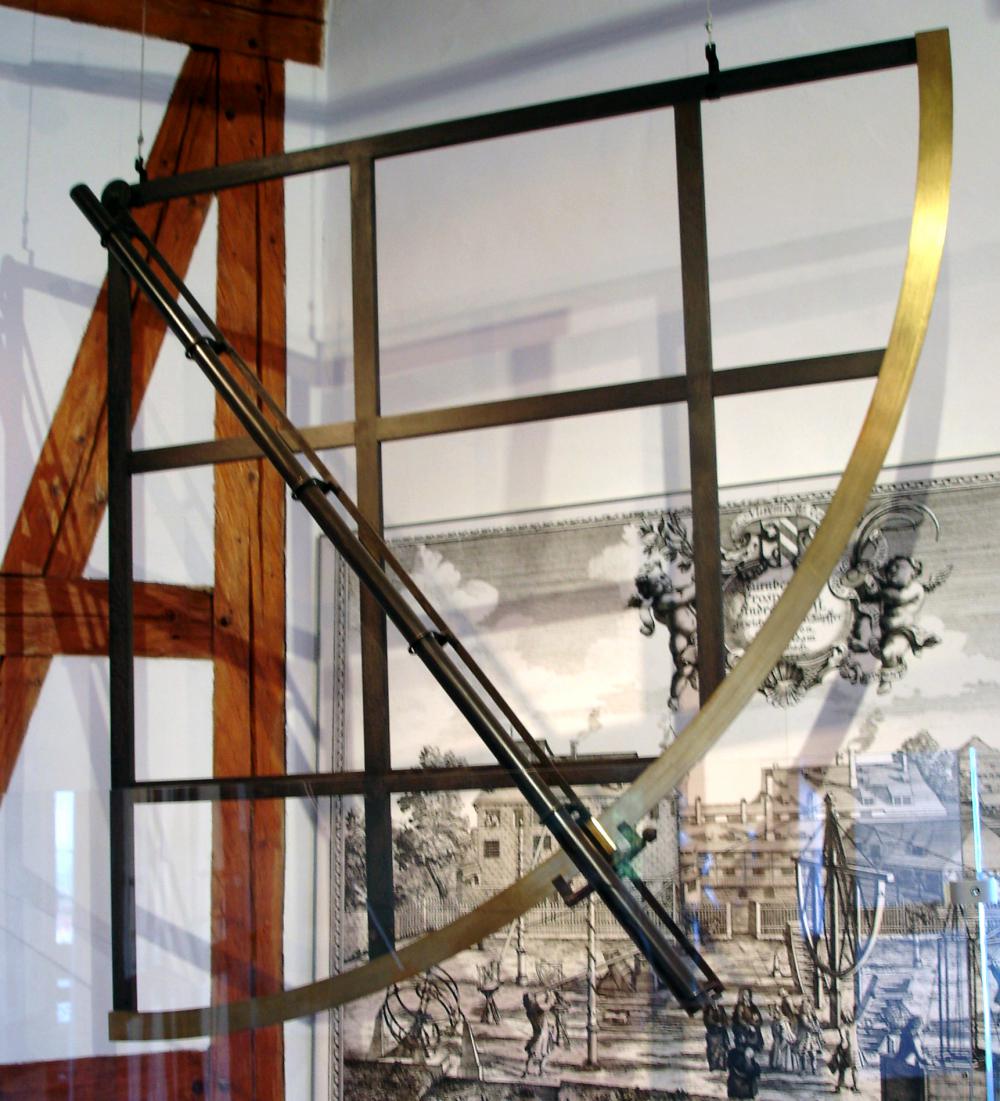 no threats; the bastion is preserved.

The bastion, the former fundaments of the observatory, is open to the public; the castle of Nuremberg is a busy touristic place.

no astronomical relevance, but important for the history of astronomy.