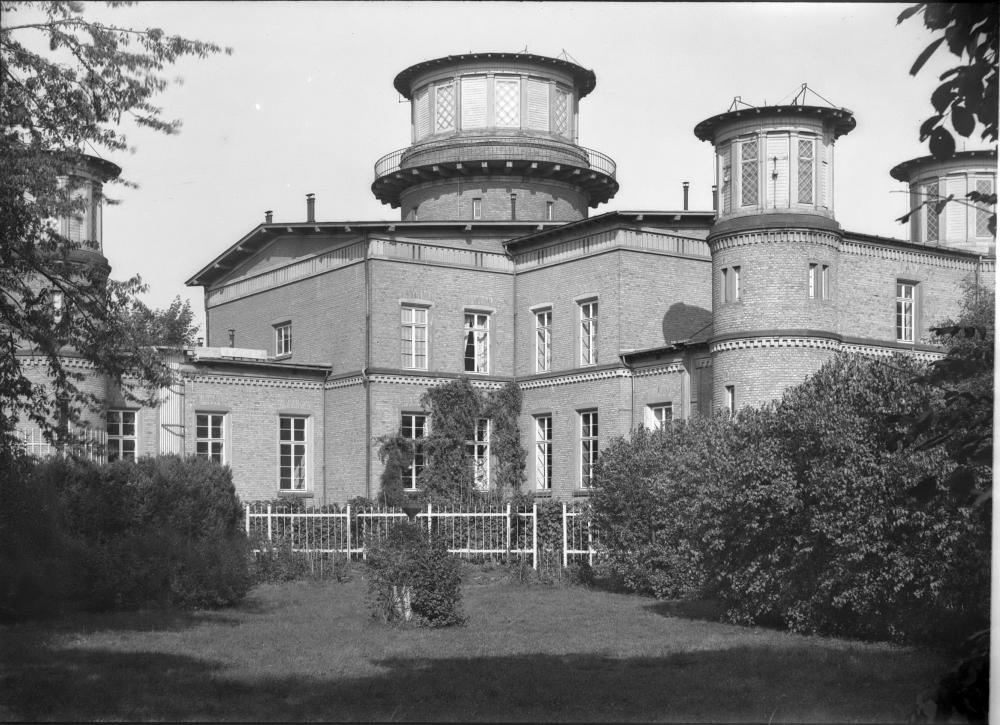 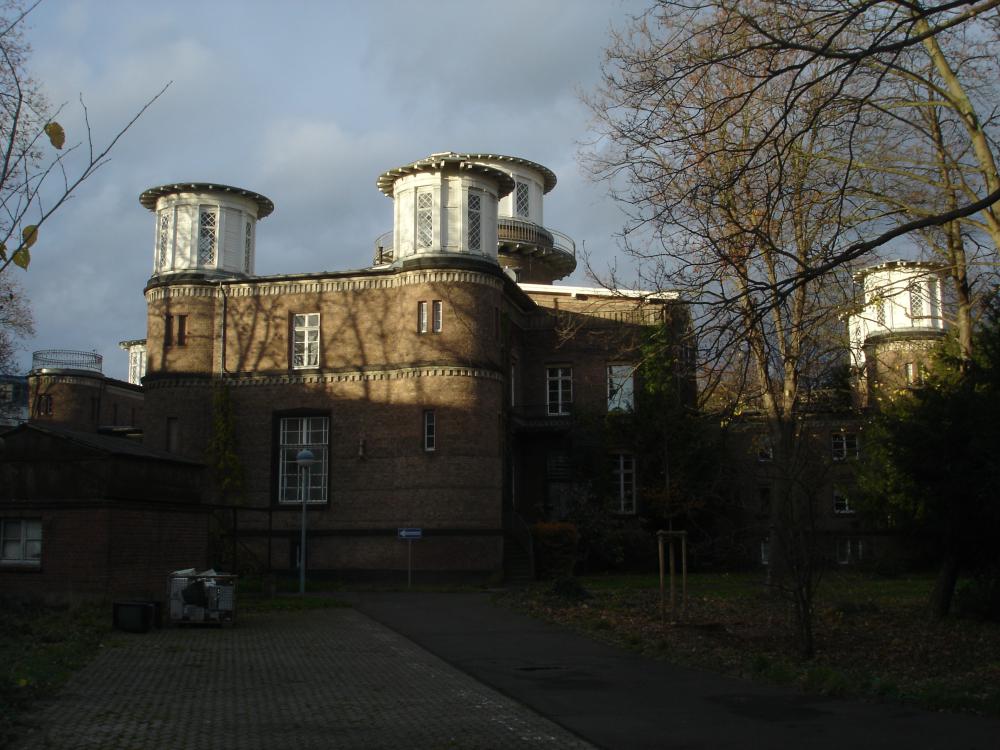 The architecture of observatories around 1800 is characterized by observatories in the shape of a greek cross with a central dome. Prominent examples of cross shaped observatories are the buildings in Berlin (1835) and in Bonn (1844), both designed by the famous architect Karl Friedrich Schinkel (1781--1841). 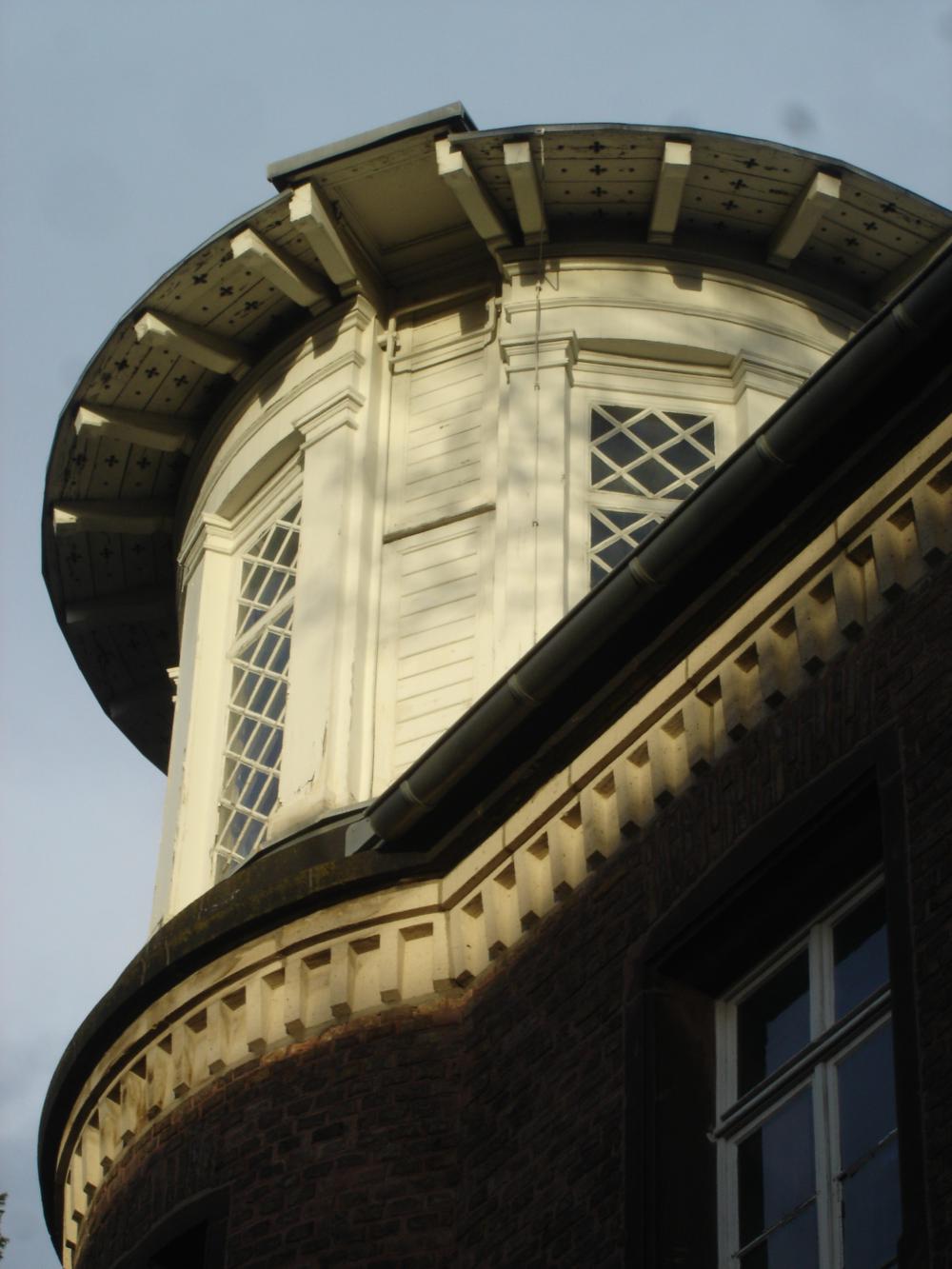 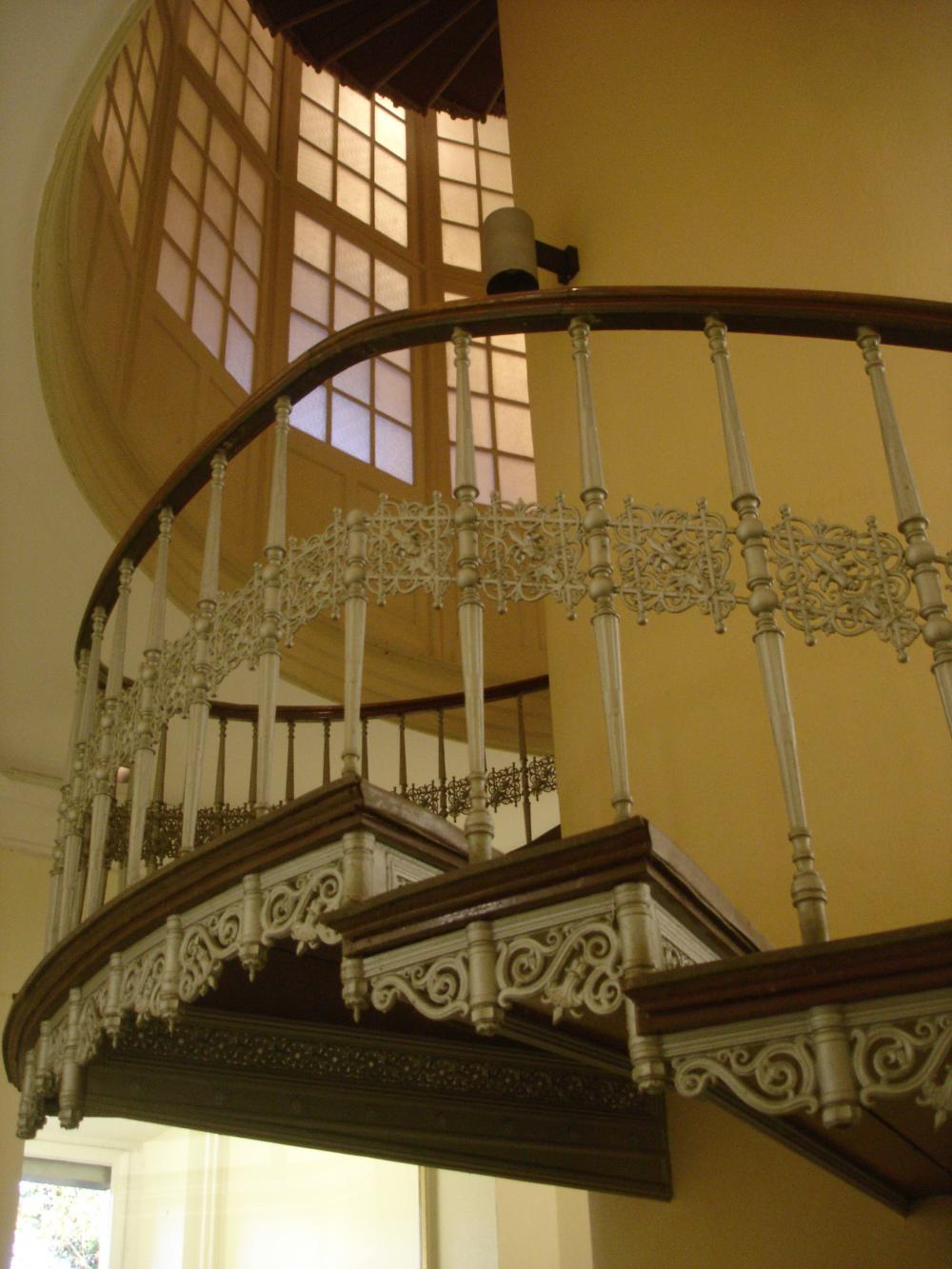 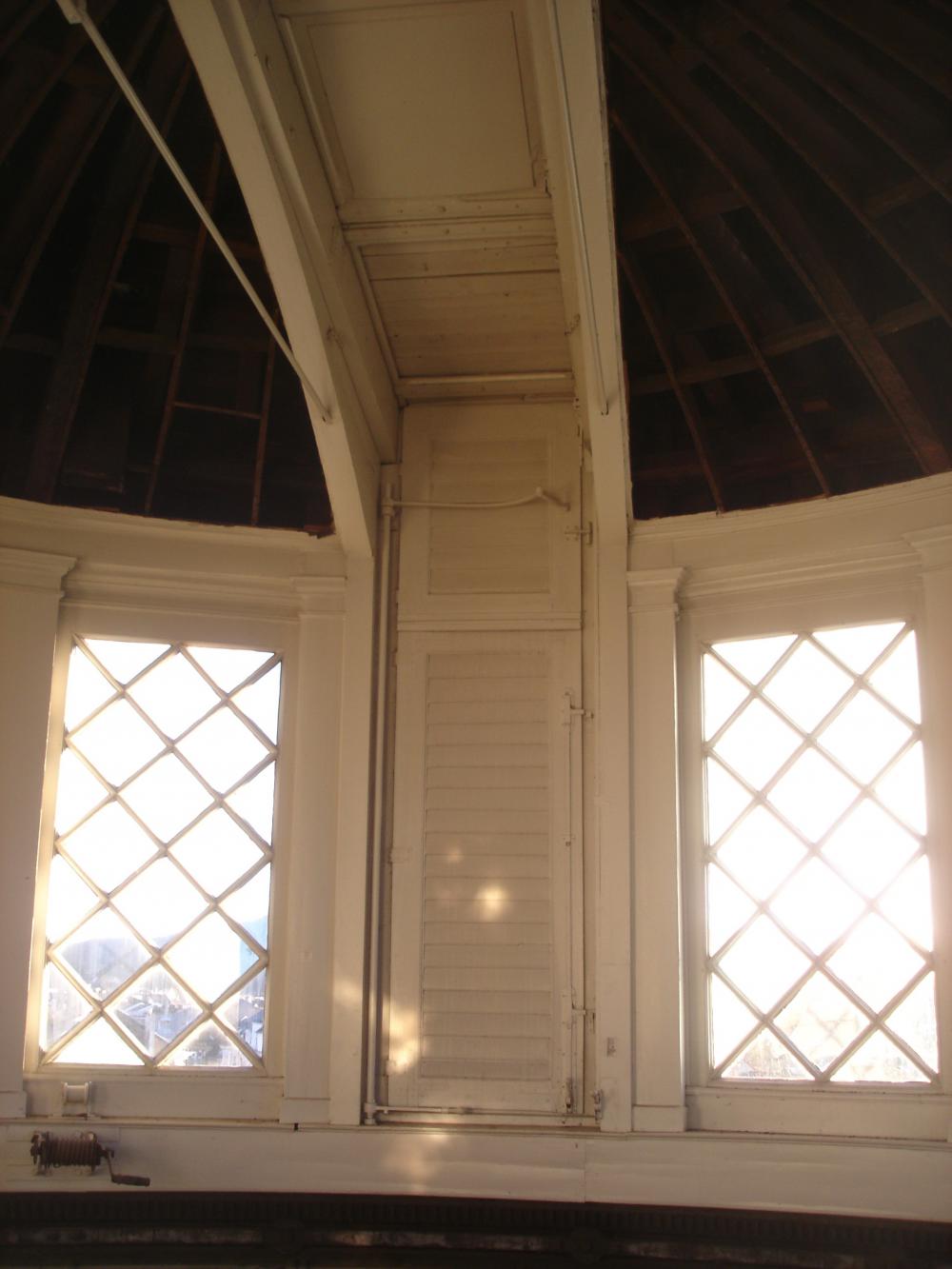 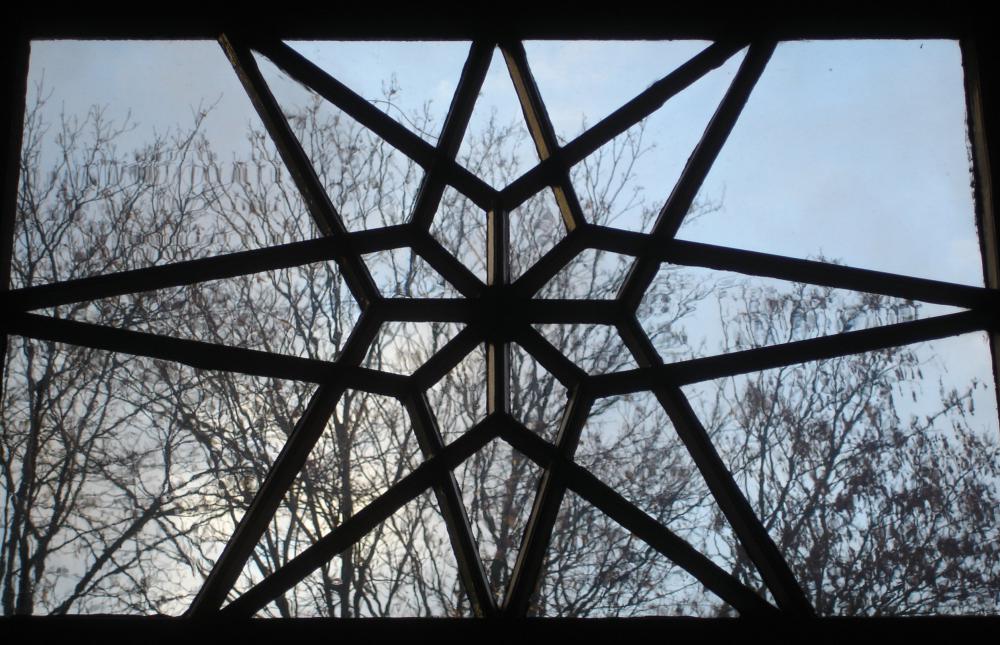 Friedrich Wilhelm August Argelander (1799--1875) could raise money for Bonn observatory, because the Friedrich Wilhelm IV. (1795-1861), King of Prussia from 1840 to 1858, was his friend since his youth. Bonn Observatory was built according to Schinkel’s design by the university architect Peter Josef Leydel (1798-1845), 1840-1844. It has an impressive architecture in classicistic style with a central dome and six smaller "domes" of cylindrical shape. The observations started in 1845. 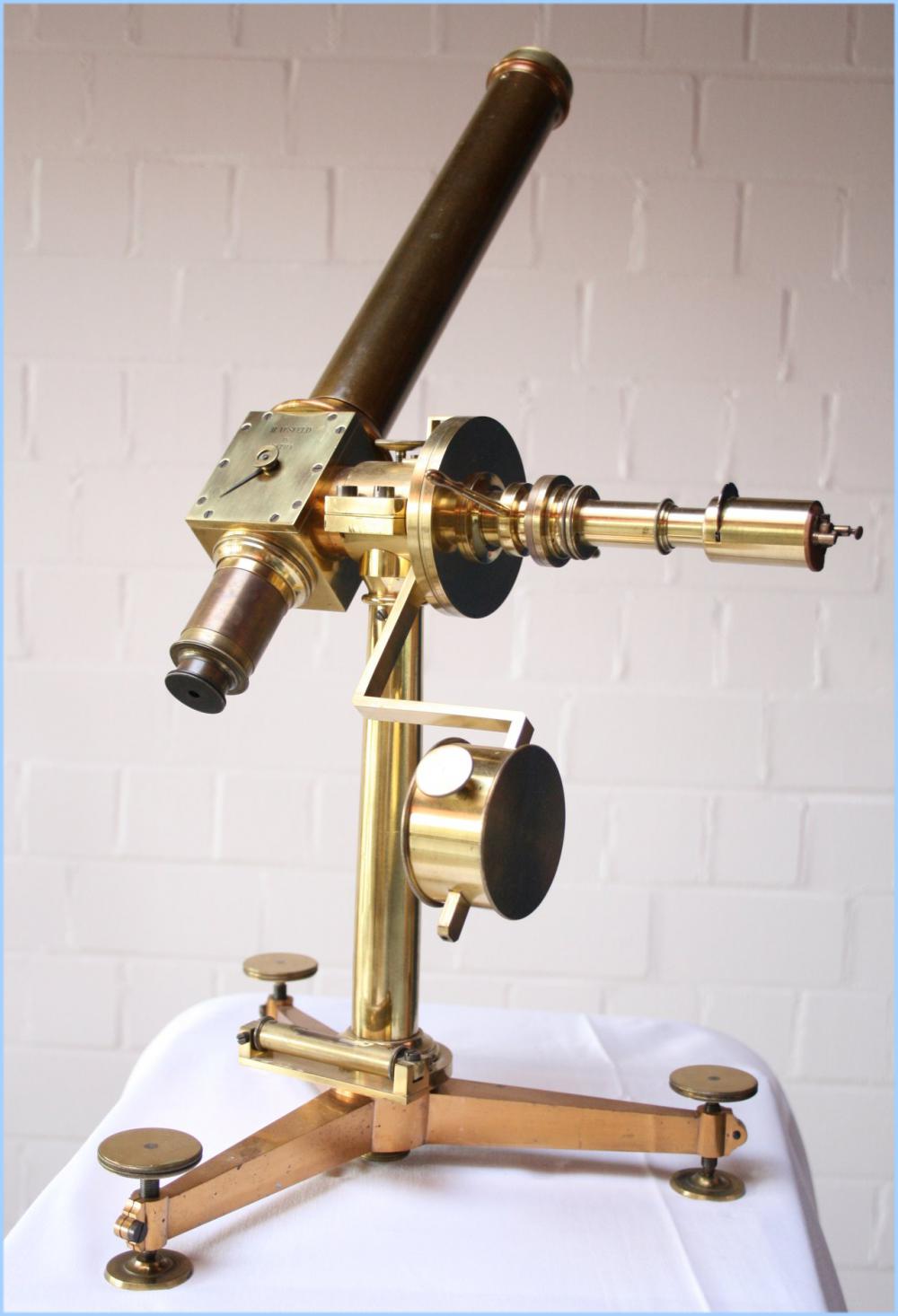 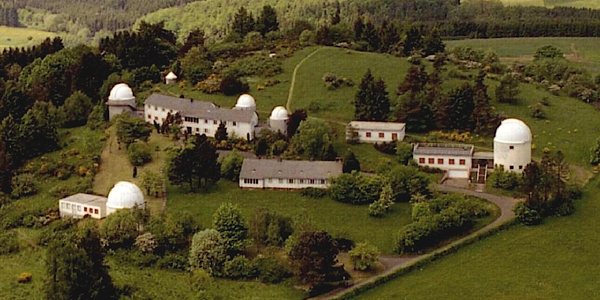 Cutting edge research in the 19th century in Bonn 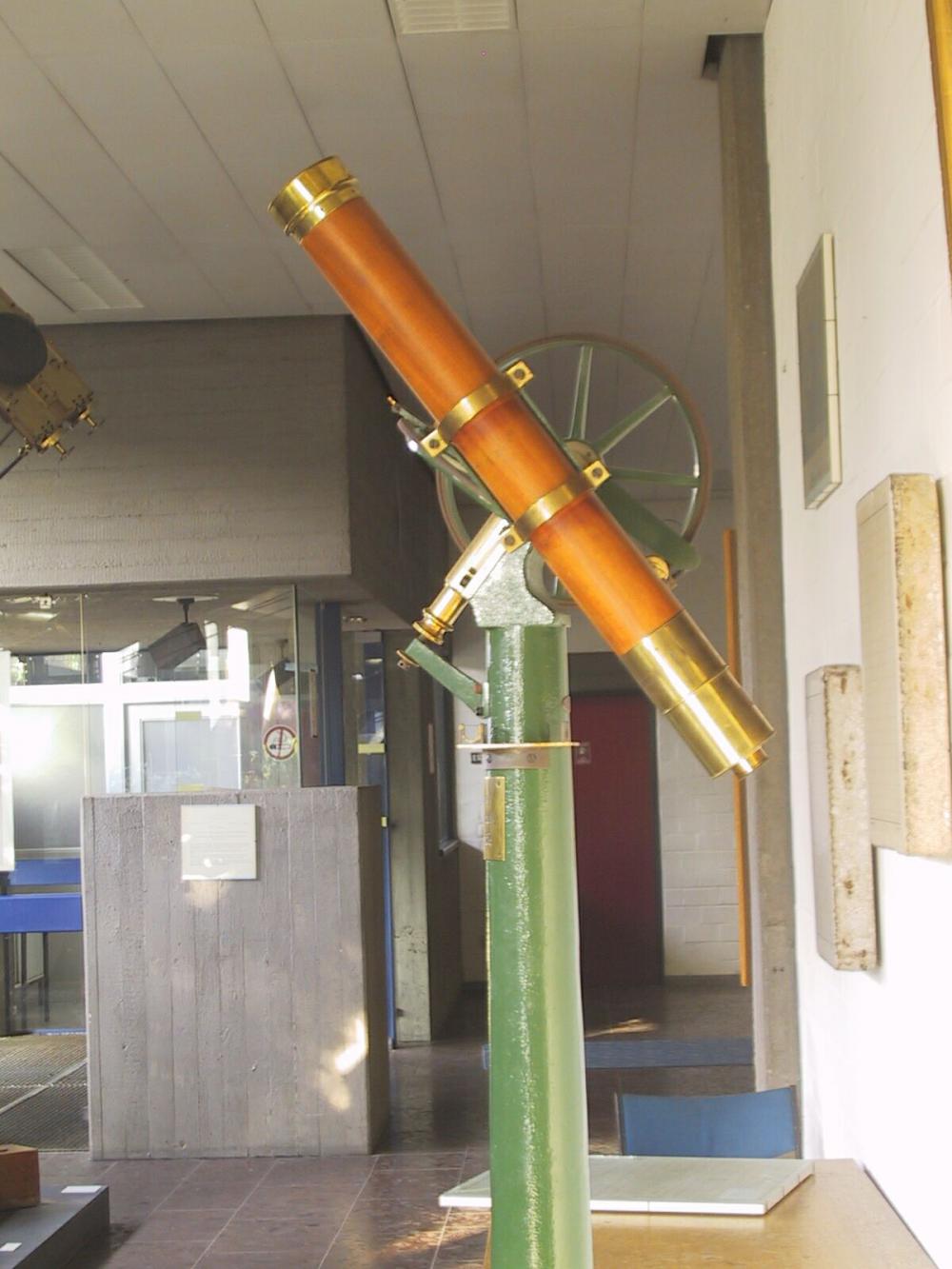 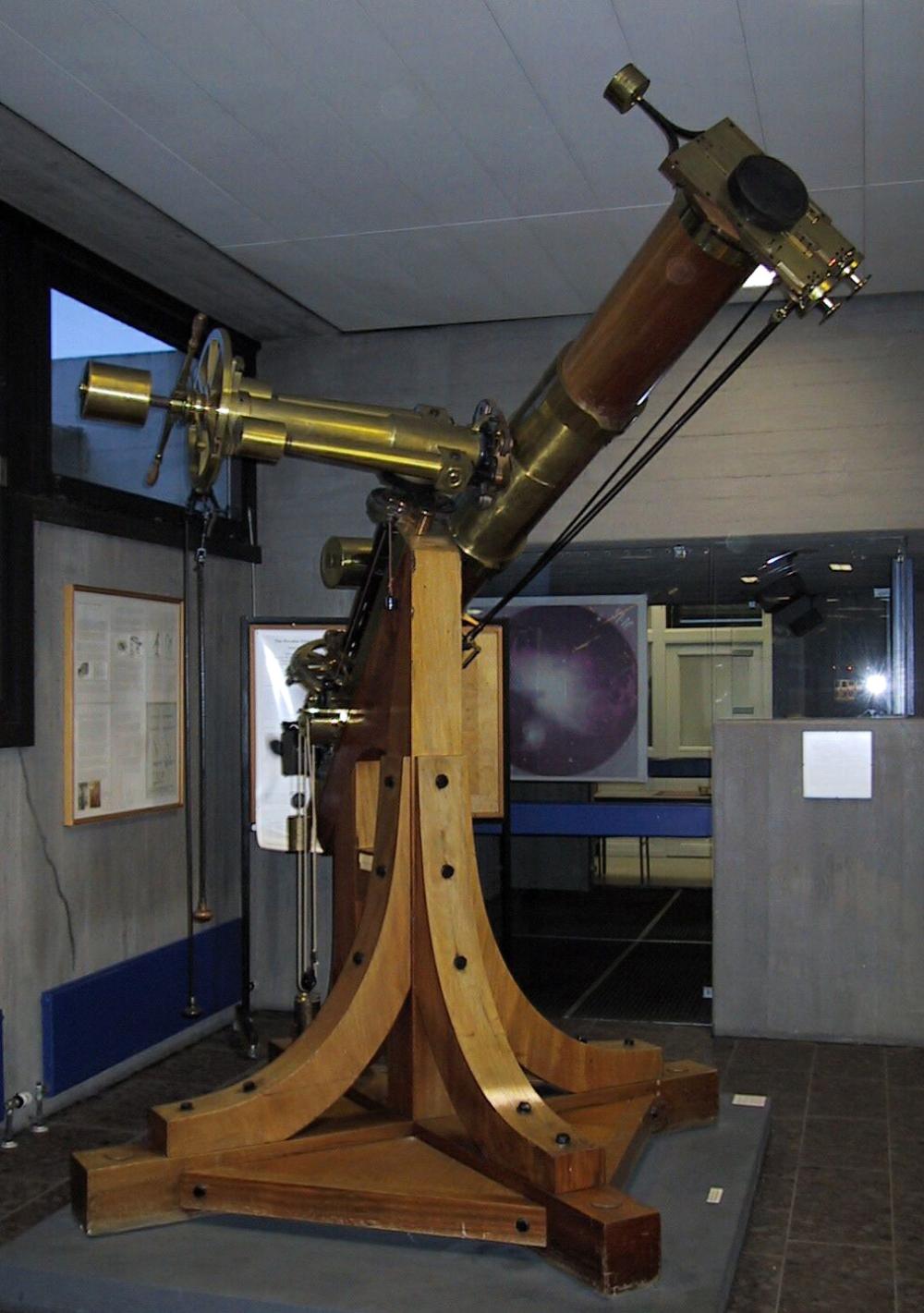 Argelander discovered candidates for nearby stars whose distances (parallaxes) were then measured by his employees, e.g. August Winnecke (1835-1897), using the Bonn heliometer - in the time when Friedrich Wilhelm Bessel (1784-1846) and Friedrich Georg Wilhelm von Struve (1793--1864) measured the first parallaxes (Argelander measured 4 out of 10 parallaxes, known at that time).

He systematically recorded the data of all known variable stars and developed with his "Stufenschätzmethode" (step estimation method) a simple method for measuring stellar brightness (visual photometry).

Argelander was an influential chairman of the "Astronomische Gesellschaft" (Astronomical Society) and he was elected in 1850 and 1864 as rector of the University of Bonn.

Karl Friedrich Küstner (1856-1936), who acquired the large refractor in 1899, started with astrophysics, especially spectroscopy and photography. He took photos of spectra in order to determine radial velocities.

In addition the establishment of the Radio Observatory Stockert enabled the Bonn astronomers access to observations in new wavelengths.

The Old Observatory as well as the refractor building are under monument protection and listed as a monument in North Rhine-Westphalia (NRW). The observatory building needs restoration.

The historic instruments were transferred in 1973 to the new building, Argelander Institute for Astronomy; here some are presented in the open entrance hall. In 2013 they were transferred to the Bonn University Museum. Some instruments, e.g. the meridian circle, were given to the Deutsches Musem Munich, when I compiled the astronomy exhibition there in 1992.

The architecture of observatories around 1800 is characterized by observatories in the shape of a greek cross with a central dome. Examples are among others the observatories in Madrid (1790 to 1846), Turku (1819), Berlin (1835), Bonn (1844), Athens (1846), Quito (1873), Vienna (1883). In the dome was the main instrument, this was a refractor; in the east and west wing was the meridian circle or the transit instrument. Also the library, the living quarters and offices for the astronomers were integrated. Especially the Observatorio Astronomico, Quito, Ecuador, erected in 1873, was built after the model of Bonn observatory.

The building is not in good condition.

Since 1975 the old Bonn Observatory is used by the Institut für Kommunikationswissenschaften of Bonn University.

The nearby dome building, the so-called Argelander tower ("Refraktorium"), is used as public observatory Bonn since 1972 (Astronomische Vereinigung e.V.); besides the refractor there in an exhibition, a library and a lecture hall.

In 1952 some of the telescopes were relocated to the new Observatory "Hoher List" in the Eifel. In 1973, the Observatory, together with the other astronomical institutes of the University moved to Endenich, today they form together the Argelander Institute for Astronomy.

The "Argelander Institute for Astronomy" was created in 2006 by the merger of the three astronomical university institutes: the Observatory, the Radioastronomical Institute (RAIUB) and the Institute of Astrophysics and Extraterrestrial Research.