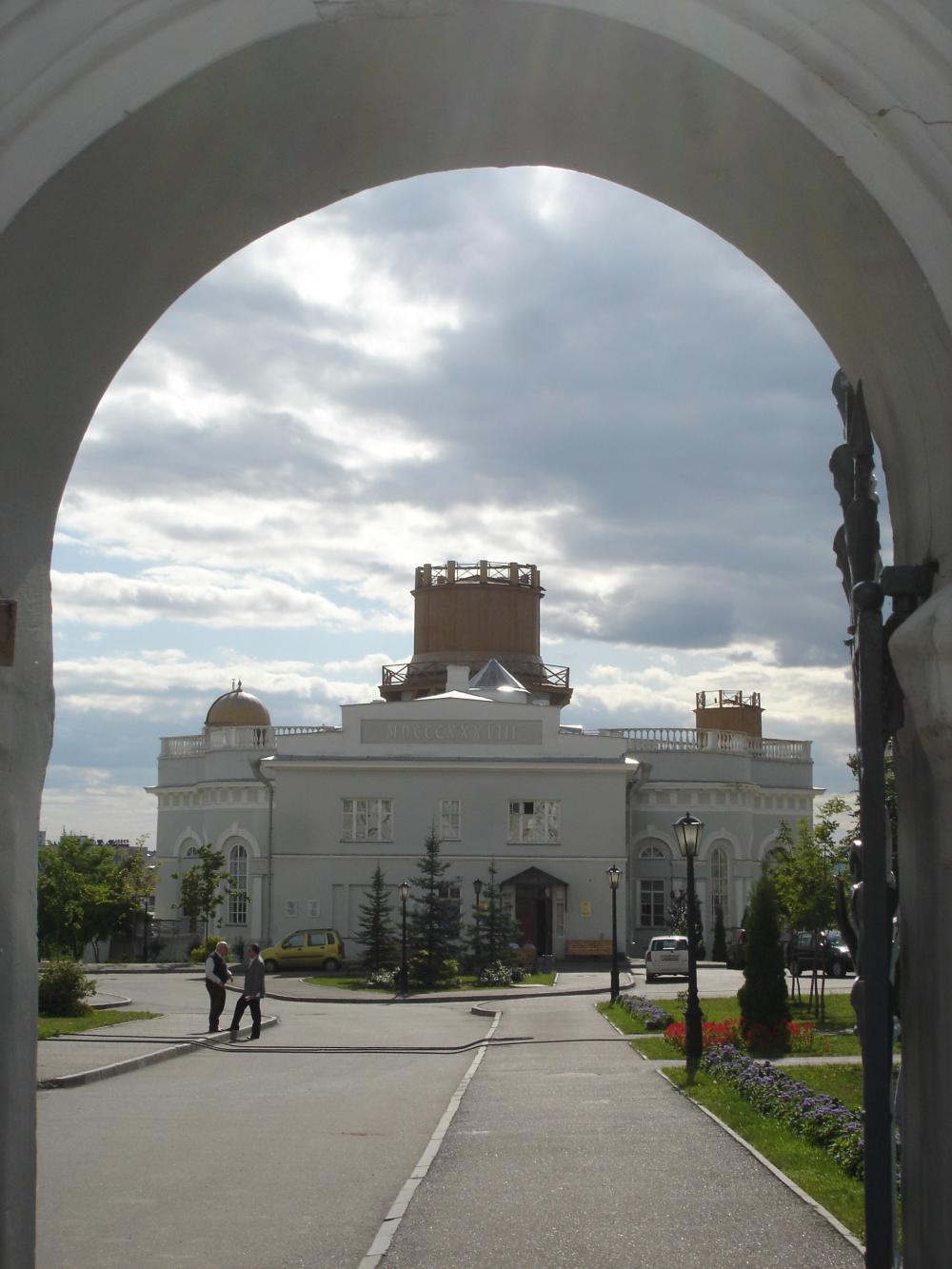 The old observatory of Kazan, founded in 1810, was the first university observatory in Russia. Its first director was Joseph Johann Littrow (1781--1840).

The old observatory of Kazan is an impressive building in neo-classical style with three "domes" of cylindrical shape, unique for its time, initiated by Nikolai Ivanovich Lobachevsky (1792--1856) and Ivan Mikhailovich Simonov (1794--1855) in 1833--1837. The building was designed by architect Mikhail Petrovich Korinfsky (1788--1851), professor of architecture, who also built the whole Kazan State University ensemble with notable buildings in 1837-1838: the main University building (a landmark, with a row of colonnades), the Anatomical Theatre (building in neo-classical style with semi-circle footprint and with Ionic colonnades), the Chemical Laboratory, the Physical Cabinet and the Library. 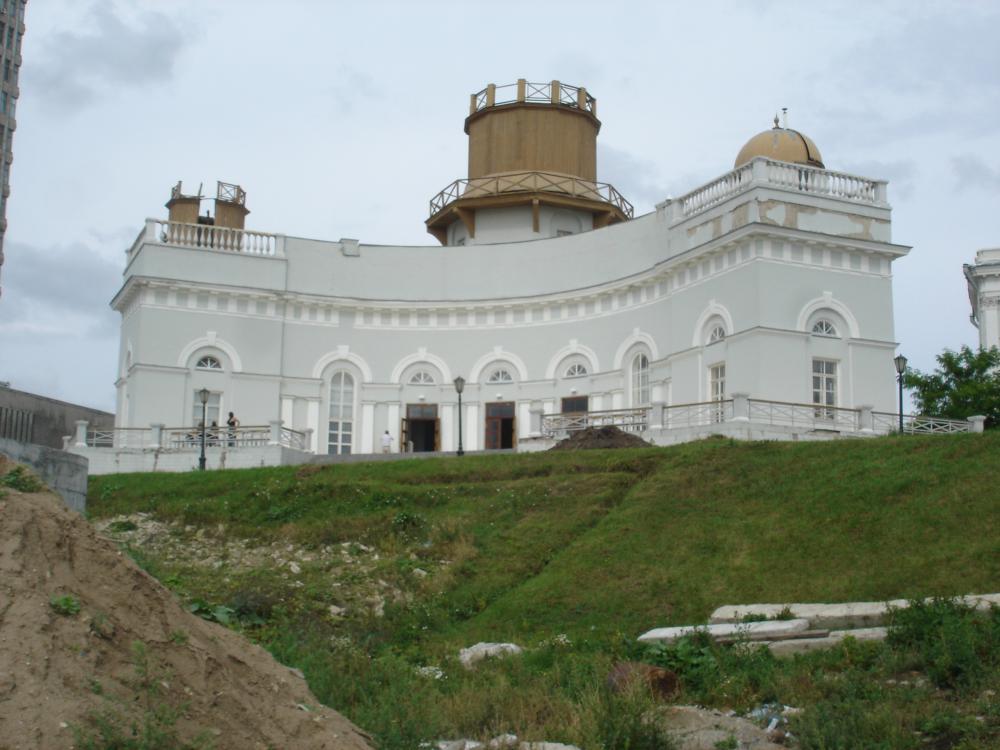 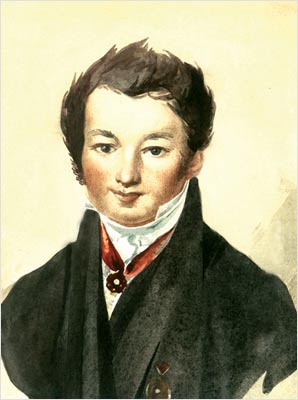 The refractor for the observatory was purchased by Lobachevsky, rector of Kazan State University,
and is in the large dome in the center of the building. 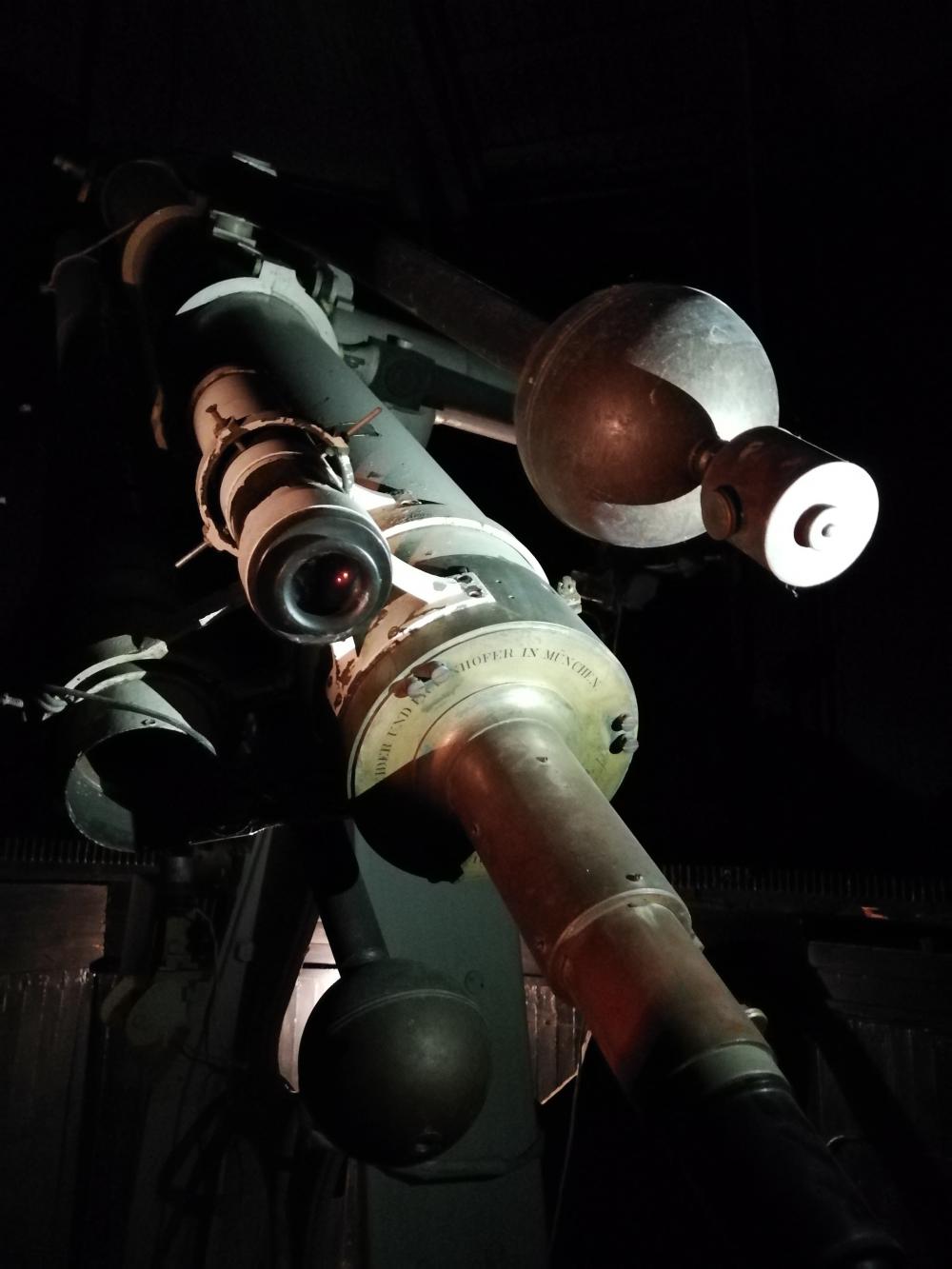 The highlight of Kazan Observatory’s activities is the First Russian round-the-world expedition (1803--1806) with participation by Fabian Gottlieb Thaddeus von Bellingshausen (1778--1852), naval officer, cartographer and explorer - in the sailing ship Nadezhda under the command of Adam Johann von Krusenstern (1770--1846). Admiral Bellingshausen was the successfull leader of the Russian circumnavigation of the globe (1819--1821), that discovered the continent of Antarctica in 1820, published as "Atlas to the journey of captain Bellingshausen in the Southern Arctic Ocean and around the world in the continuation of 1819, 1820, and 1821". He was accompanied by Mikhail Petrovich Lazarev (1788--1851) as second commander and by Simonov as astronomer. 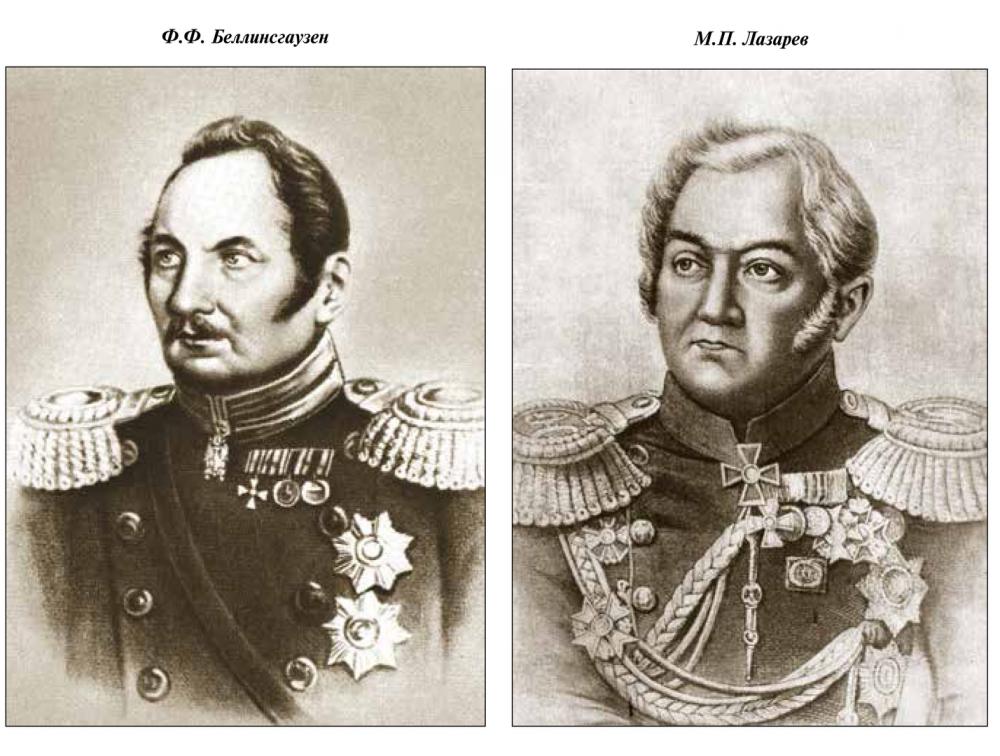 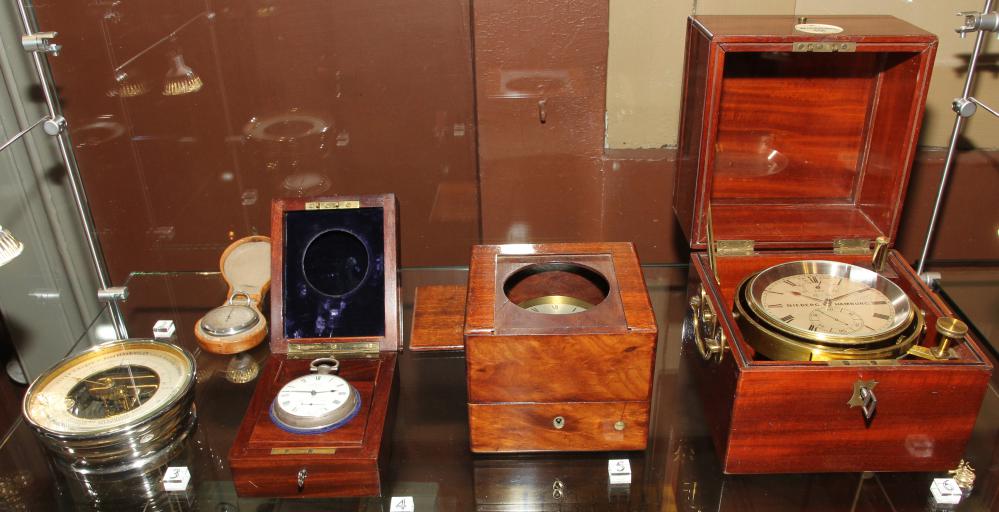 Main topics of research of Kazan Observatory -- besides the expeditions and magnetic studies -- were astrometry, stellar catalogues, celestial mechanics, investigation of the variability of latitude, and lunar studies, made by Matvey Matveyevich Gusev (1826--1866). The physical libration of the moon was studied by Alexander Krasnov (1866--1911) with the heliometer. 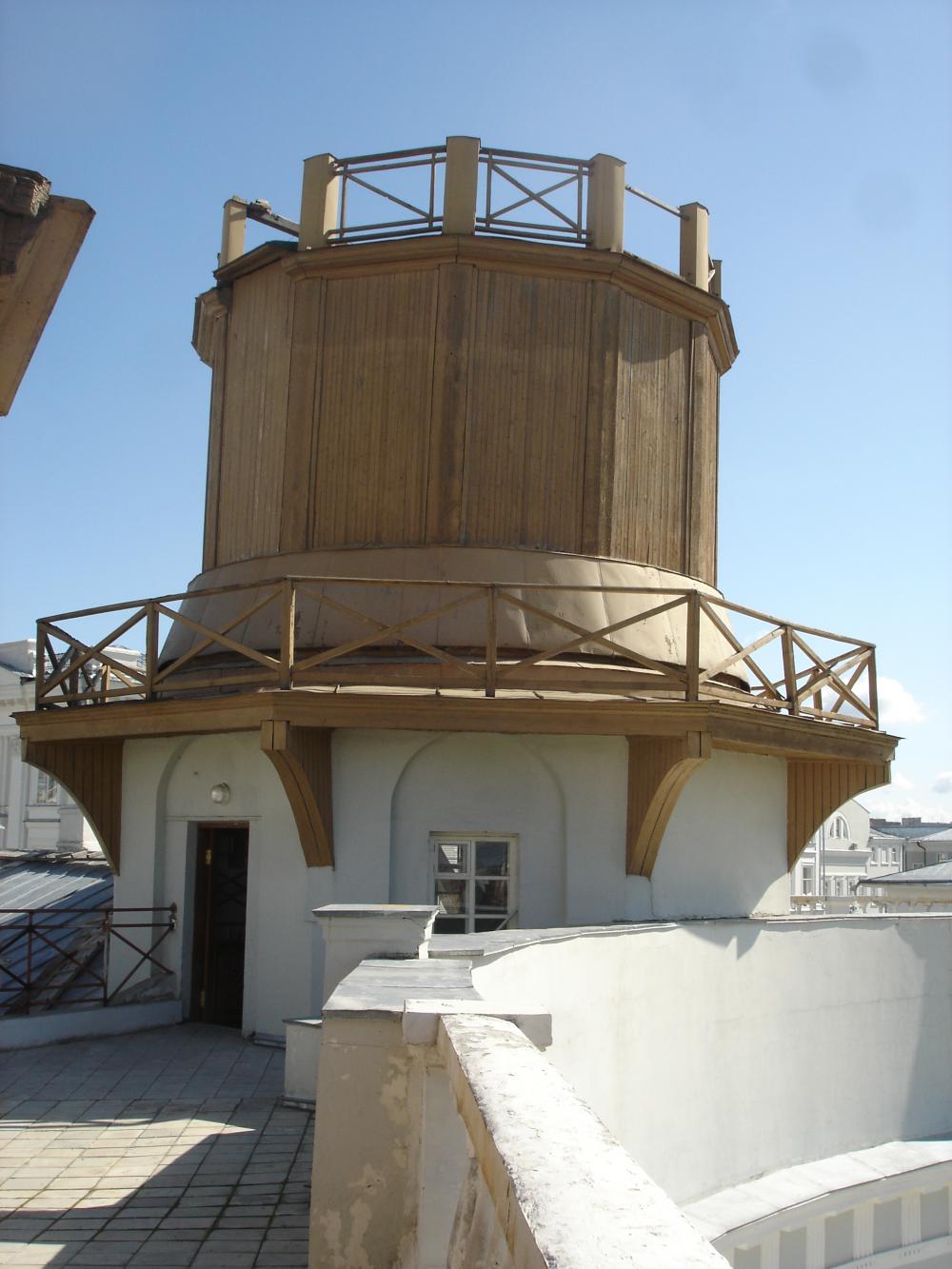 Later a Heliometer, A. Repsold & Sons of Hamburg (1874), an achromatic Refractor, made by George Dollond, a 68-mm-Transit instrument, Carl Bamberg of Berlin, and a Pendulum clock (1885) were acquired.

The footprint of the concave curved building is very interesting -- the directions for the observation with the meridian circle in the Western hall, and observing in the first vertical in the Eastern hall --  are clearly visible. 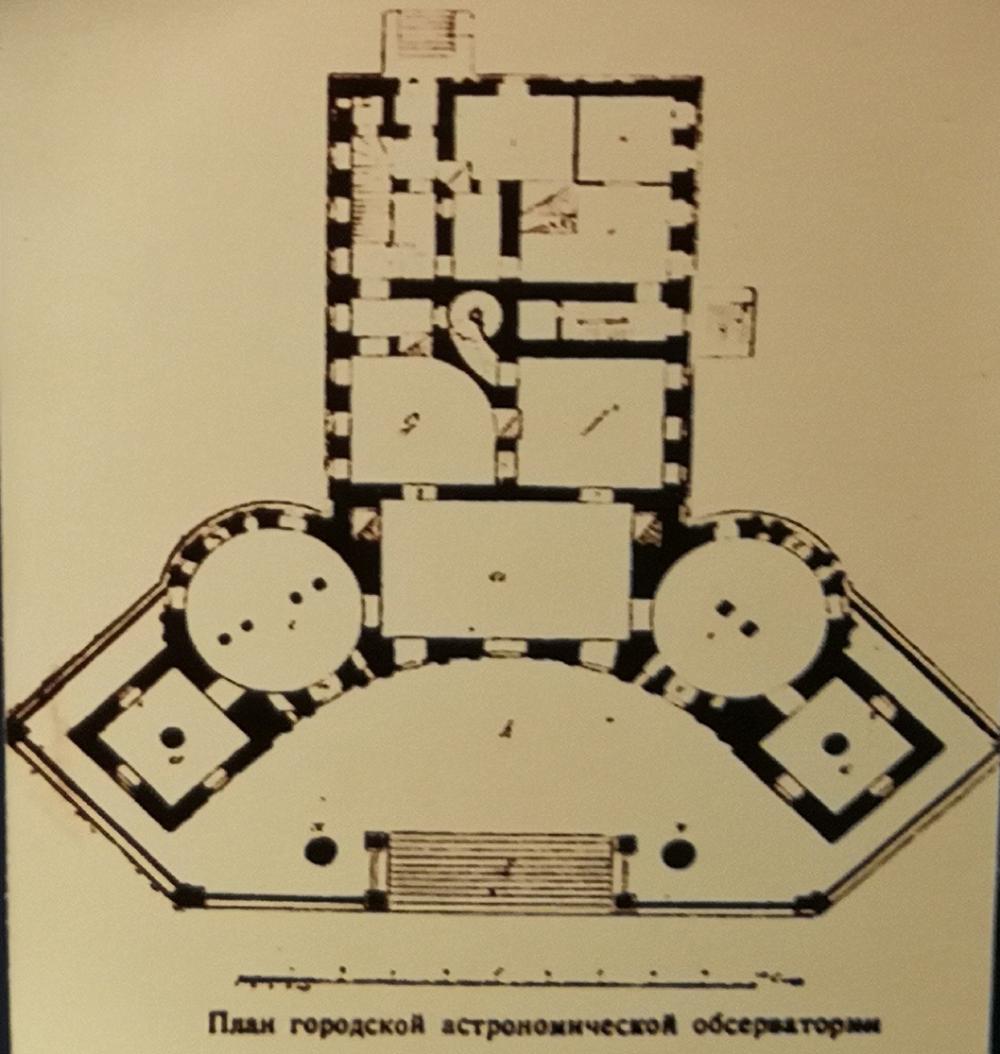 Fig. 6a. Footprint of the Old Observatory building in Kazan (1837), (Photo: G. Wolfschmidt) 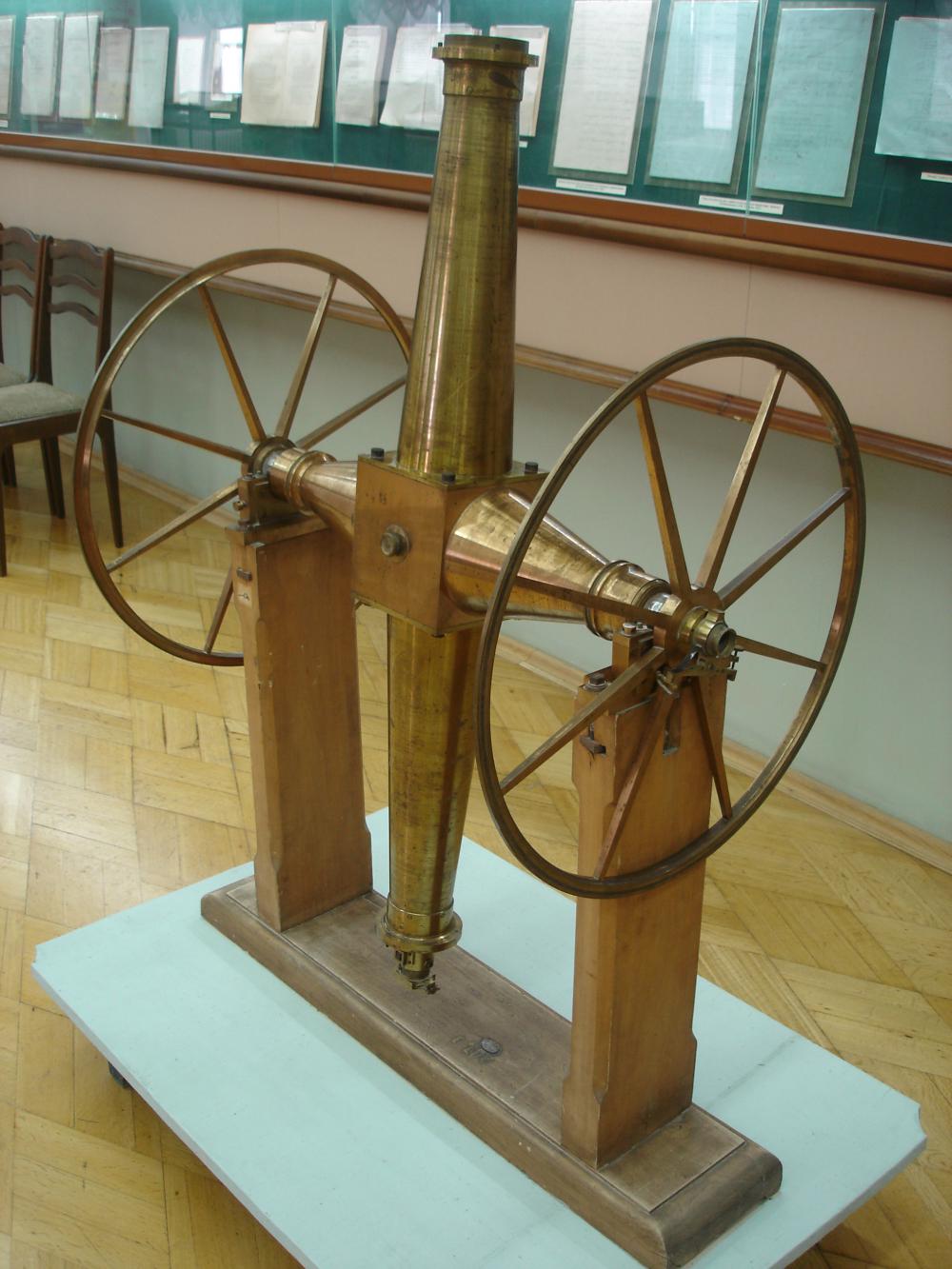 Nikolai Ivanovich Lobachevsky (1792--1856), famous Russian mathematician and geometer, renowned primarily for his pioneering works on hyperbolic geometry, otherwise known as Lobachevskian geometry. His teacher in Kazan for mathematics, astronomy and physics, 1808--1811, was the German mathematician Johann Christian Martin Bartels (1769--1833), the teacher and later friend of Carl Friedrich Gauß (1777--1855). Lobachevsky became associate/full professor at Kazan University in 1816/1822, dean of the physical-mathematical faculty 1823--1824, rector of the university 1827--1846.

In 1850, Marian Kowalski (1821--1884) was called from Pulkovo Observatory, as associate professor and director from 1850 to 1884, active together with the observing astronomer Mikhail Vasilyevich Lyapunov (1820--1868). Kowalski created new mathematical methods for the calculation of the orbits of minor planets and binary systems. 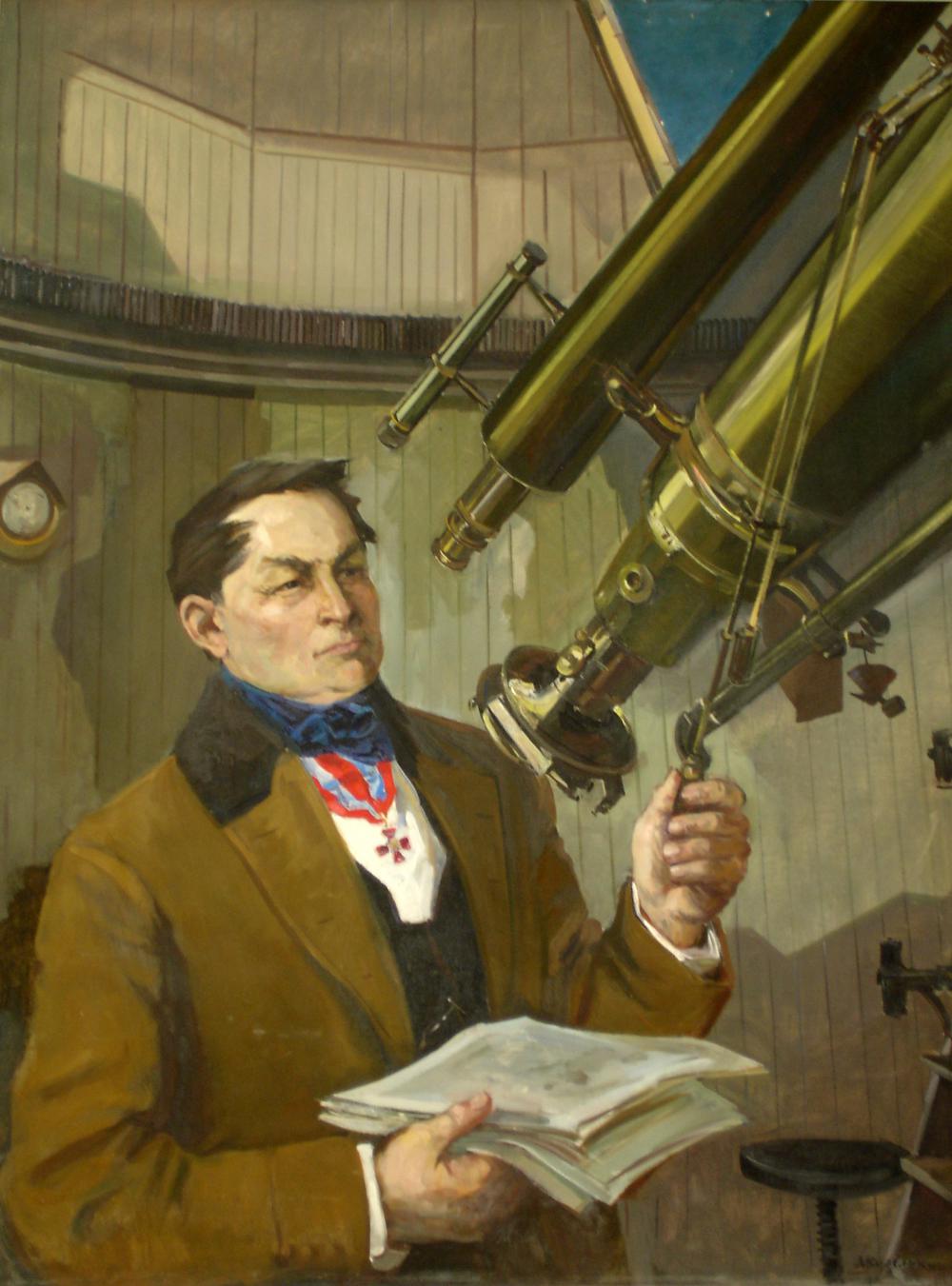 Ivan Mikhailovich Simonov (1794--1855), Russian astronomer and member of the Russian circumnavigation of the globe expedition (1819 to 1821) of Fabian Gottlieb Thaddeus von Bellingshausen (1778--1852) and Mikhail Petrovich Lazarev (1788--1851), discovered Antarctica. Simonov developed methods for astronomical observations, for example he designed a reflector. In addition he was among the first persons in Russia who studied terrestrial magnetism, also inspired by Alexander von Humboldt (1769--1859), who visited Kazan University. On his initiative, two observatories were established in Kazan: the astronomical observatory in 1833 and an observatory for the study of magnetism in 1843. 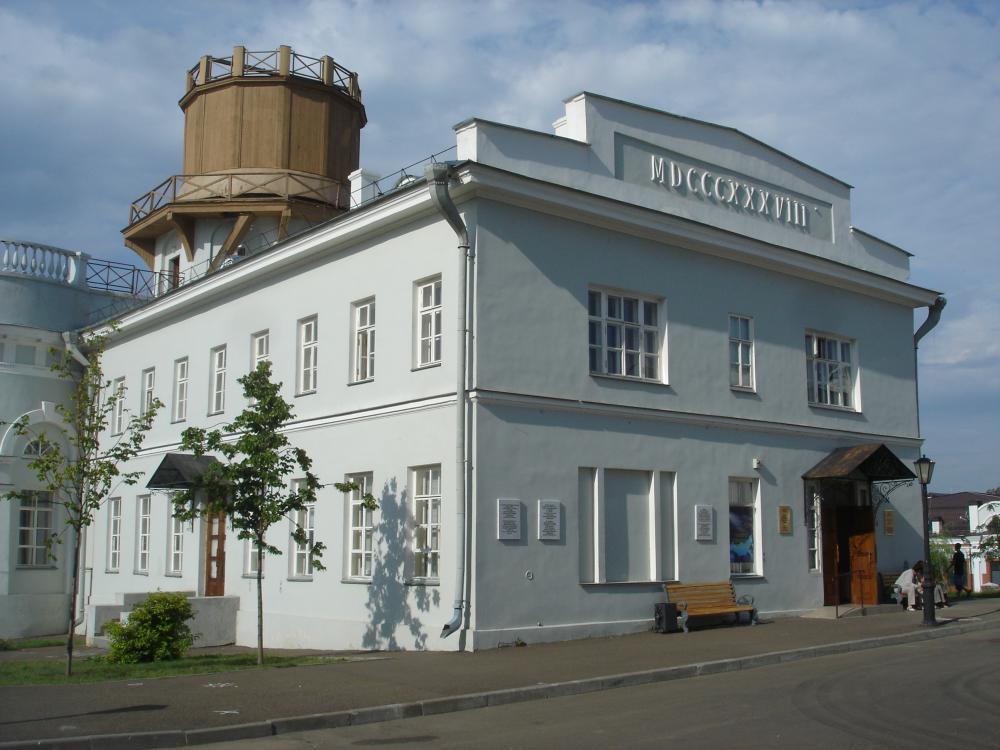 Concerning preservation and restoration: The observatory building and the whole University ensemble are well preserved - in good condition.

The 24-cm-Fraunhofer-Merz-refractor (1838) reminds of the first famous original 24.4-cm-Fraunhofer achromatic refractors in Dorpat (now Tartu, Estonia), 1824, and Berlin (1829) (now in the Deutsches Museum in Munich) observatories.
The Kazan heliometer, A. Repsold & Sons of Hamburg (1874), should be seen in the context with the famous first Fraunhofer heliometer in Göttingen (7.7cm, 1815), and the large one in Königsberg (today Kaliningrad), Utzschneider & Fraunhofer, Merz & Mahler of Munich (15.8cm, 1826/29). For the Venus transits in 1874 and 1882, several small 7.7-cm-heliometers were constructed by Repsold of Hamburg, e.g., Berlin, Breslau (today Wrocław) and Gotha. 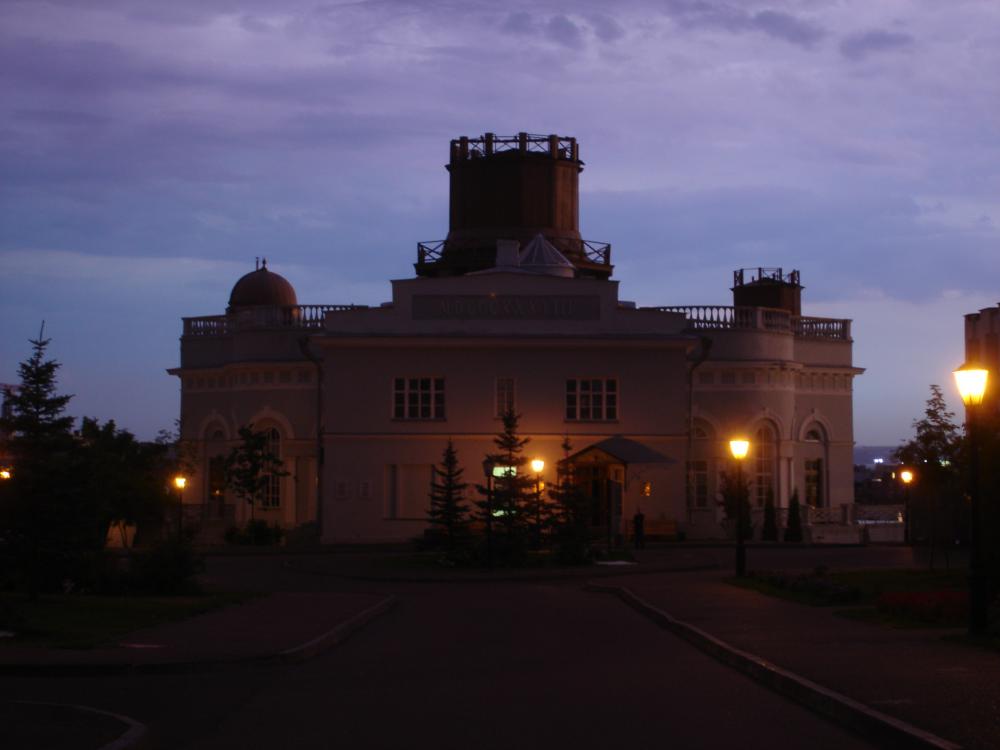 Friedrich Wilhelm August Argelander (1799--1875) designed after the great fire in Turku (Åbo) in 1827, together with the architect Carl Ludwig Engel (1778--1840), a friend of Schinkel, the Helsinki Observatory, which was finished in 1834; it was among the most modern observatories of its time. The largest instrument was a meridian circle on stone pillars with a three foot graduation circle, made by Utzschneider of Munich. The good design principles of Helsinki Observatory were adopted in Russia for the design of the Pulkovo Central Observatory. In 1984 was Helsinki Observatory renovated to celebrate the 150th anniversary and an astronomical museum was added to the Department of Astronomy of the University.

Turku University Observatory (1819--1833), where Argelander became in 1823 director of the observatory, is now a museum.

The old observatory of Kazan, founded in 1810, was the first university observatory in Russia, it is an impressive building with three "domes" of cylindrical shape, erected in 1833--1837.

Pulkovo Observatory, St. Petersburg, with its three dome facade (in the beginning also cylindrical shape) and the cross shape floor plan became a model for the rest of the 19th century. It was designed by Alexander Brüllow (1798--1877) for the first director Friedrich Georg Wilhelm Struve (1793--1864). Besides the dominant central dome with the 15-inch refractor (Merz of Munich, 1839) there were two smaller domes, for a refractor and a heliometer, and in between there were the slits for the meridian circles (transit instrument, an Ertel mural circle, and a Repsold meridian circle). After Pulkovo Observatory was badly damaged in WW,II it was reconstructed by architect Alexey Shchusev in 1952. The domes were in the beginning cylindrical, later spherical.

Pulkovo, an outstanding example for classical astronomy, was the leading observatory in that field and served as a model observatory for the architecture of observatories in the 19th century.

Later Examples are among others Lisbon, Portugal, founded in 1861, or Potsdam Astrophysical Observatory (1879), and in the United States Yerkes Observatory (1897) and some smaller university observatories like Barnard Observatory of Lafayette Oxford University, Mississipi, constructed 1857--1859, or Georgetown College Washington, D.C. (1841--1844).

Still in use for the Astronomical and Cosmic Geodesy Department of Kazan State University, Kazan, Russia, founded in the 1930s for teaching students in geodesy, who would participate in the future geodetic and gravimetrical expeditions in different regions of Russia. The new astronomical direction was founded in 1960s with the main goal to determine fundamental stellar parameters based on modeling stellar spectra formation. For these purposes, space observation were used (TD-1A, BUSS, Copernicus, IUE). 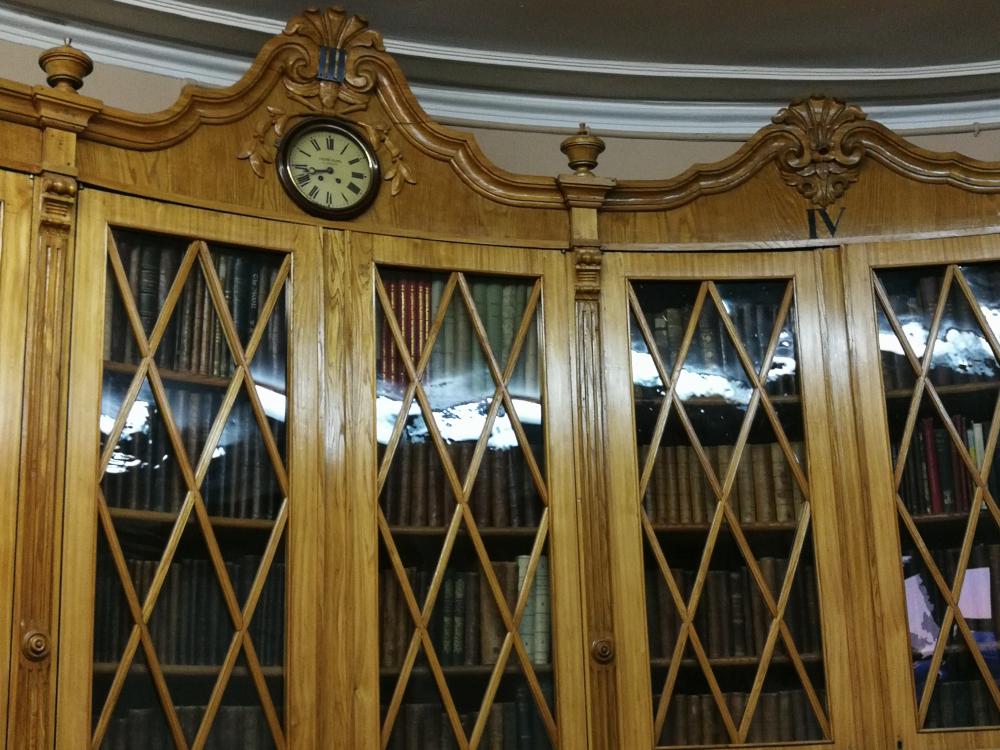 Astronomy is in addition at a new site: IAU code 136 Engelhardt Astronomical Observatory (EAO) of the Kazan University Observatory, but the old building is still used by the university for teaching astronomy and geodesy, including the library.