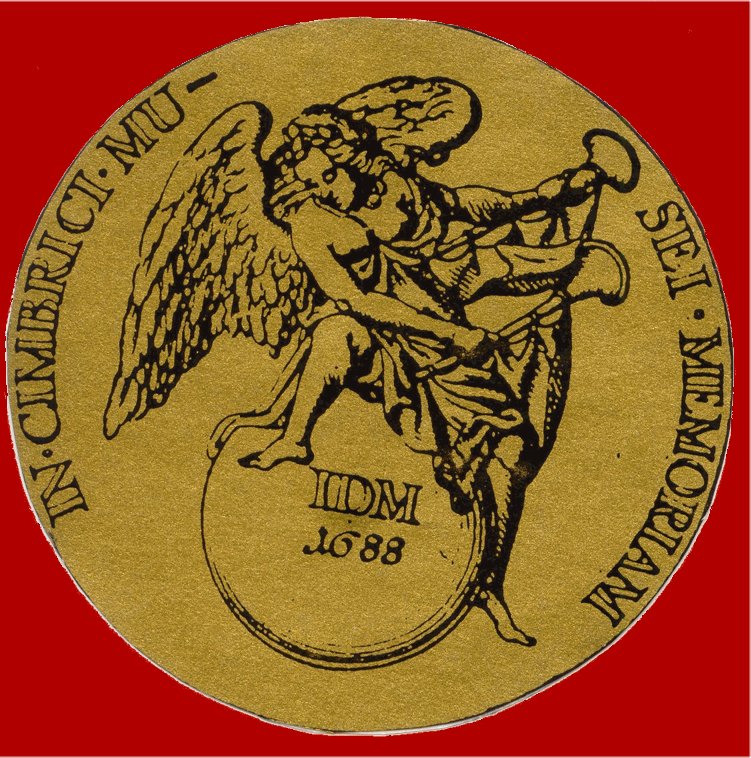 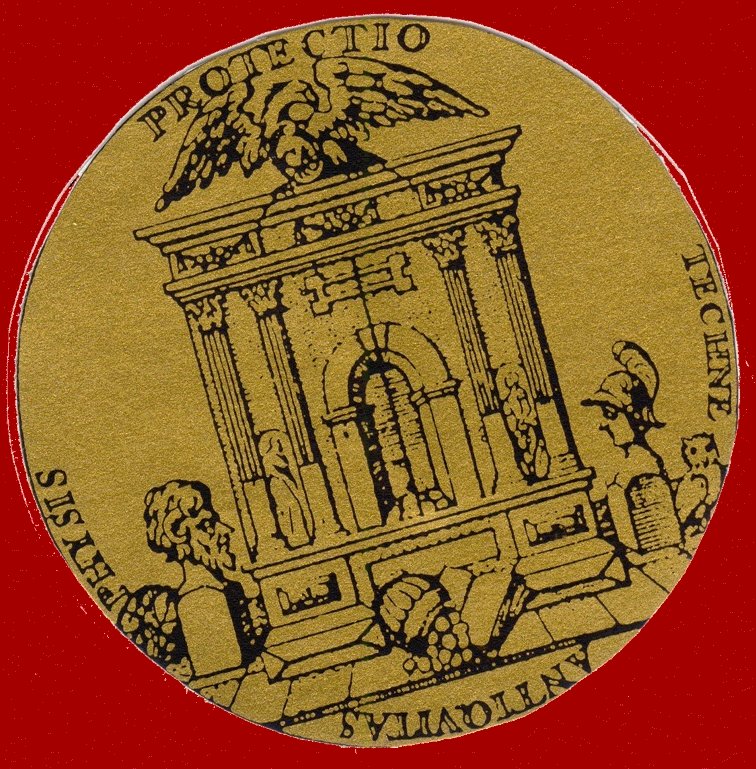 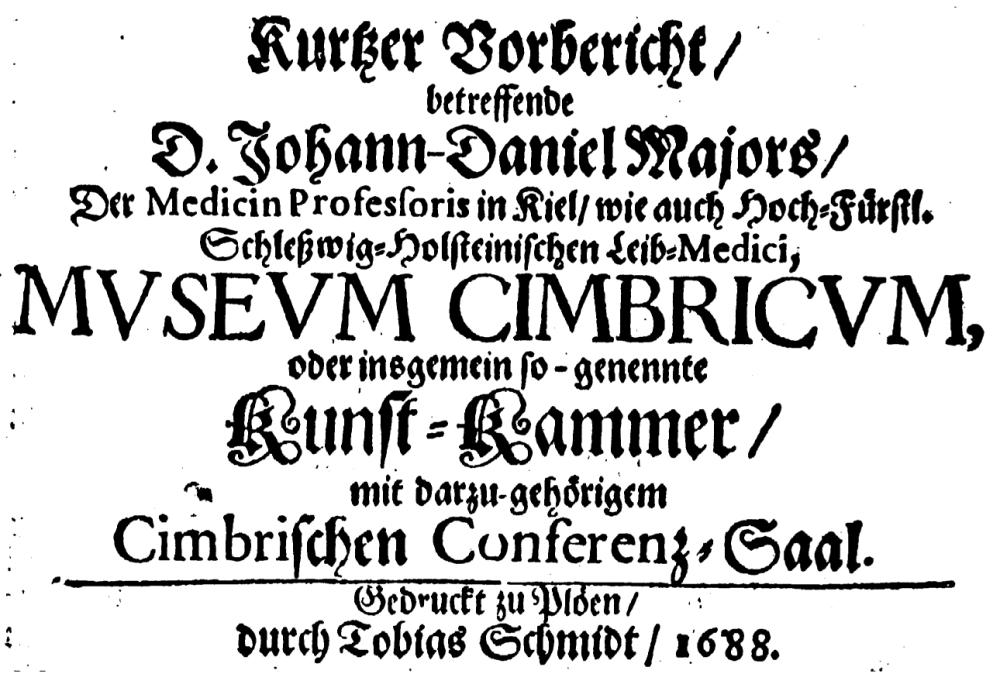 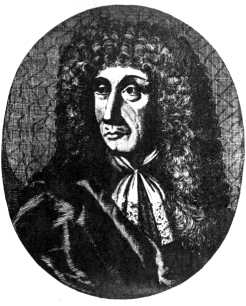 Catherine the Great (1729--1796), Tsarina of Russia and Duchess of Gottorf, had the east building renovated in the 18th century; the famous Hamburg architect Ernst Georg Sonnin (1713--1794) built a large mansard roof in 1763 instead of the previous small individual roofs. The east building faced the water, and there were two towers on the land side. There, the first Kiel observatory was located in the south-western tower of the east wing from 1769 zo 1820. The dome of the tower was replaced by a platform for the
for the movable instruments. 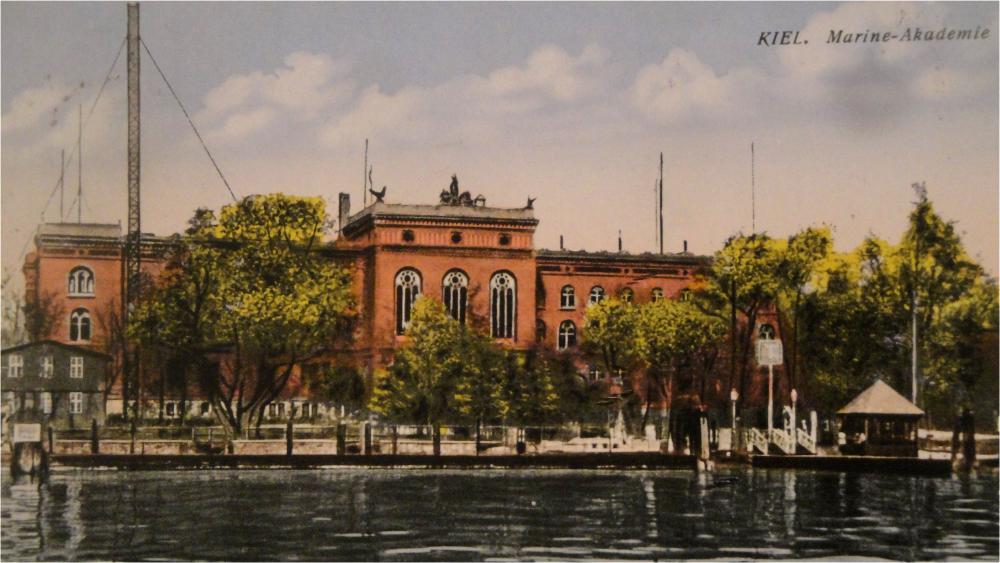 Kiel has a long maritime tradition; it is the city of fishermen, seamen and shipbuilders, an important location for the navy, shipyards and sailing. Navigation is of course closely related to astronomy.

King Wilhelm I (1797--1888), King of Prussia since 1861, German Emperor from 1871 to 1888, moved the Prussian navy from Danzig to Kiel in 1865 -- before the victory in the Prussian-Austrian War of 1866, which made Schleswig-Holstein a Prussian province. The navy buildings were built along the fjord. In 1866, the naval school was built in Kiel in Waisenhofstraße. A Naval Academy in Romanesque brick architecture was founded in 1888 (rebuilt in 1938, today the seat of the state government). This was followed by an Imperial Engineering and Deck Officer School in Wik at the mouth of the Kiel Canal. 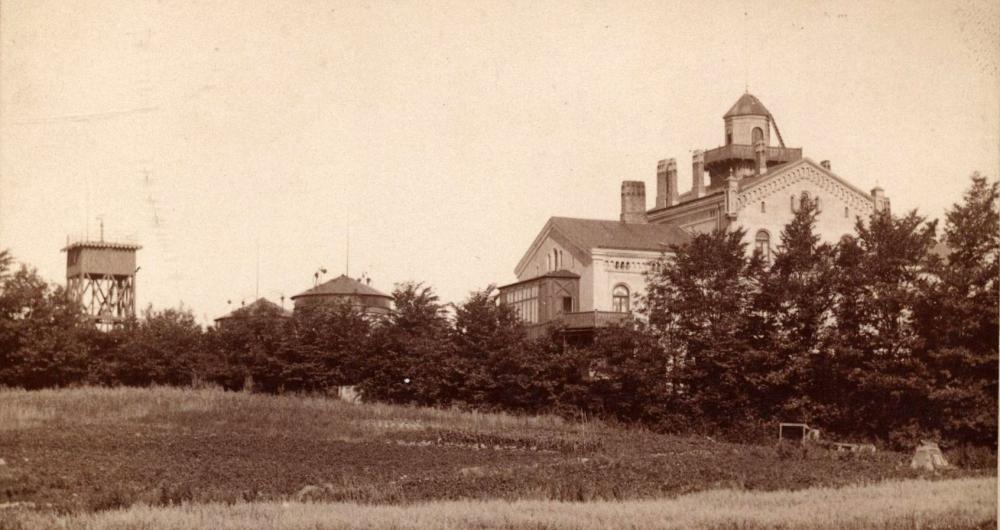 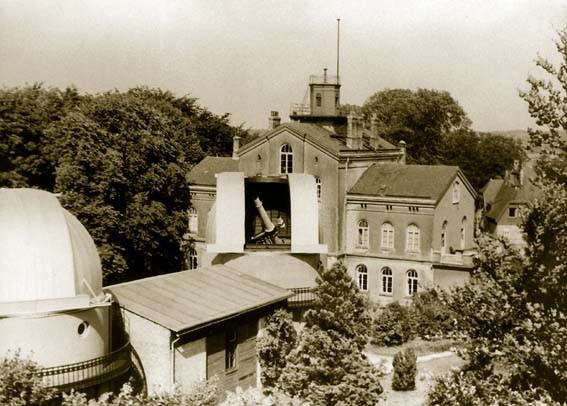 Kiel had already had a Navigation School since the 1860s. When Schleswig-Holstein came under Prussian rule after the German-Danish War, the former Danish Altona Observatory near Hamburg was dissolved in 1871 and moved to Kiel. As a result, most of their instruments (especially a Repsold Meridian Circle and three refractors) came to Kiel as basic equipment.

Then, a university observatory for the chair of astronomy was built in 1875. The observatory consisted of two separate parts, connected by a wooden corridor: In the Navigation School (1860s) was the library, lecture and seminar rooms and the administration. The observation buildings for the large refractor and the meridian circle were supplemented 1875--1876.

In order to make comet and planetoid discoveries known quickly, a central office for astronomical telegrams was established in Kiel in 1883 -- at the place of publication of the most important astronomical journal (Astronomische Nachrichten). 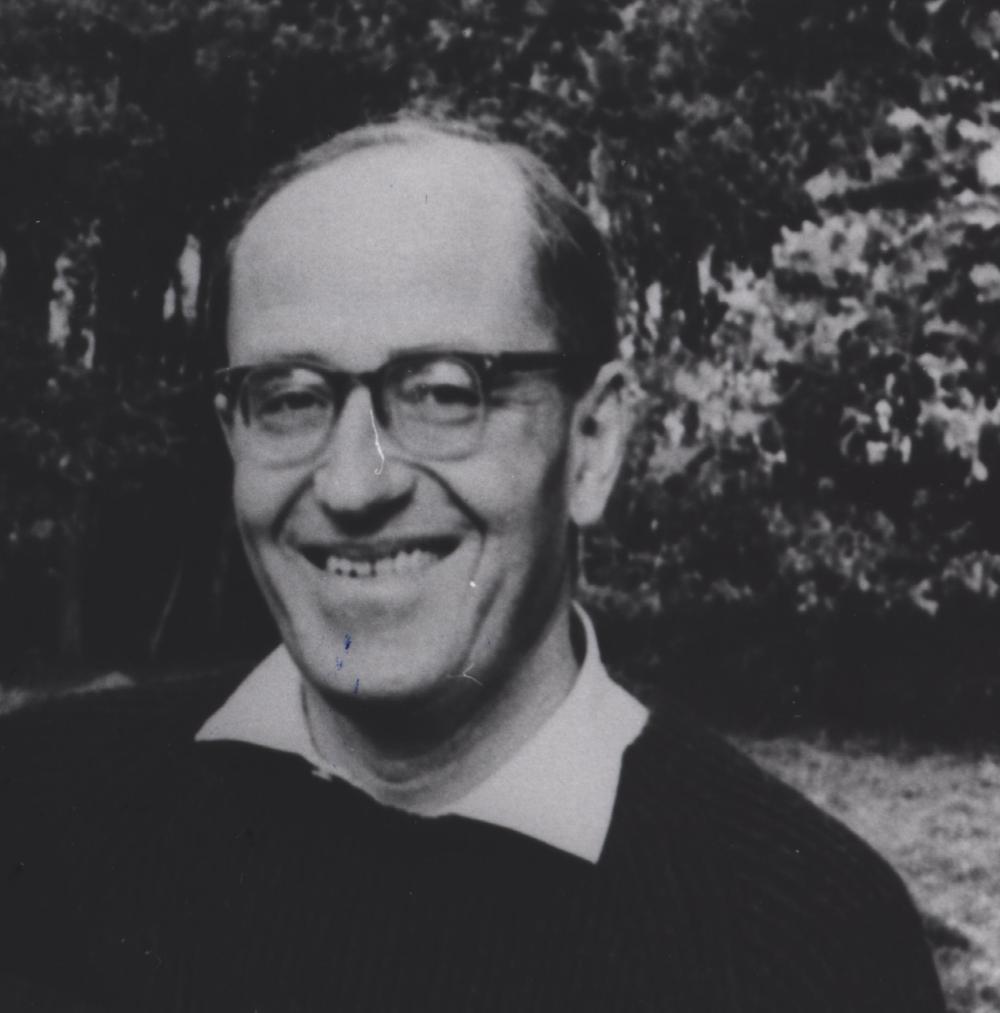 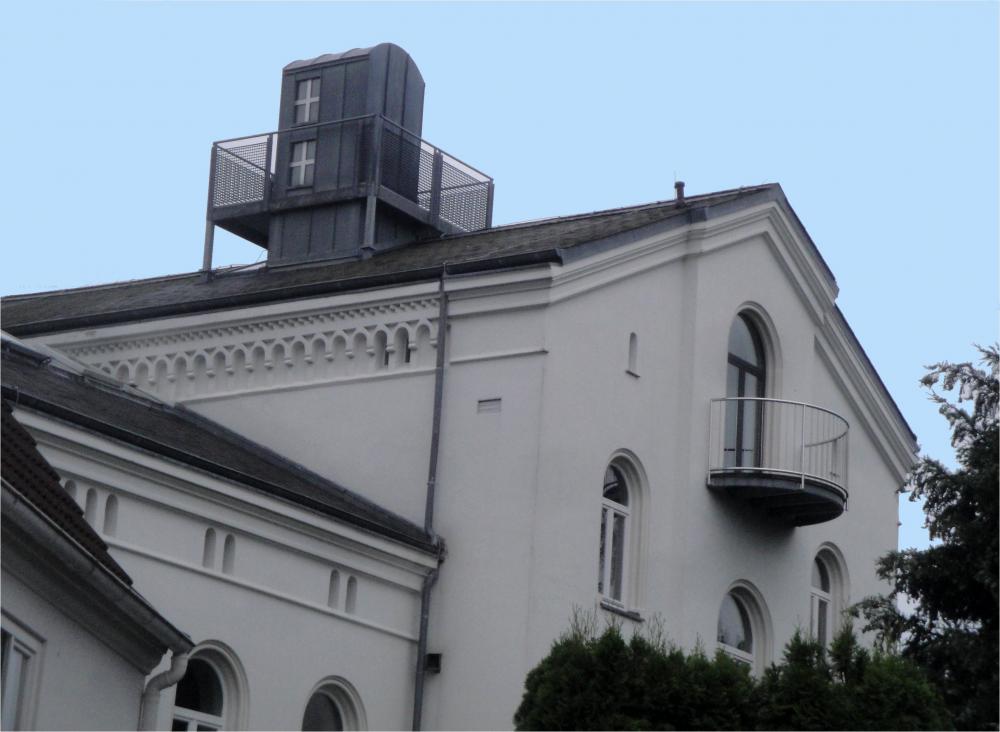 
Unsöld and the "Institute for Theoretical Astrophysics and Observatory", 1932 to 1973

Under Albrecht Unsöld (1905--1995), director from 1932 to 1973,the observatory was renamed to "Institute for Theoretical Astrophysics and Observatory" of the University of Kiel (1938). He was an outstanding astrophysicist and layed the fundaments for the new topic "Stellar Atmospheres". In this context, Unsöld was in close cooperation with the laboratory astrophysics.

A precise analysis of the stellar spectra yields a wealth of information. In 1859, Kirchhoff and Bunsen were only able to indicate which chemical elements were on the Sun. Almost a hundred years later Albrecht Unsöld analysed what percentage of an element is present on a star. To do this, he measured the intensity of certain absorption lines. On the basis of the line width and the line profiles, the physical state of the star’s atmosphere can be described, such as the high temperature of the surface, the pressure and the gravitational acceleration.

Based on the work of Cecilia Payne[-Gaposchkin] (1900-1979), who in 1925 had the surprising result that hydrogen and helium are the most abundant elements in stellar atmospheres, Unsöld started in the late 1920s to determine the abundances of hydrogen in the Sun. His next goal was to transfer the new method to the stars. Why did he not actually choose a sun-like star?
"The ratio of hydrogen to the other elements could not be judged with such certainty on the Sun, because at that time it was not felt certain that the excitation of hydrogen at the relatively low temperature of the Sun would still follow the formulae for thermal equilibrium. would follow. With the hot stars, on the other hand, it was quite clear that this was was correct. And so I came to see from a completely different angle that hydrogen was so common. that hydrogen was so common."

Thus, Unsöld chose τ Scorpii, a hot B0 V star whose spectra had been were recorded in 1939 by Otto Struve at McDonald Observatory, Texas, using the 200-cm-reflector with high dispersion.

The result of his first detailed analysis of a star apart from the Sun, were large abundances of hydrogen compared to helium and the "metals". Unsöld’s textbook Physics of Stellar Atmospheres from 1938 is still considered a standard work today. the standard work, the "bible of theoretical astrophysics".

Thanks to Unsöld the "Institute for Theoretical Astrophysics and Observatory" of Kiel University gained international recognition. 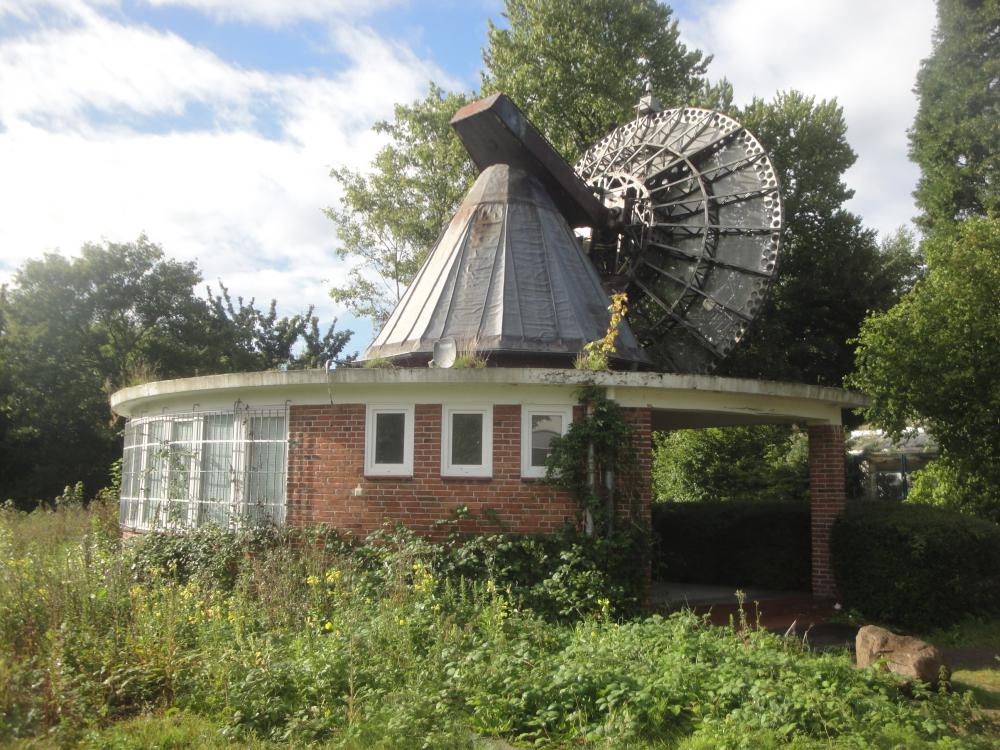 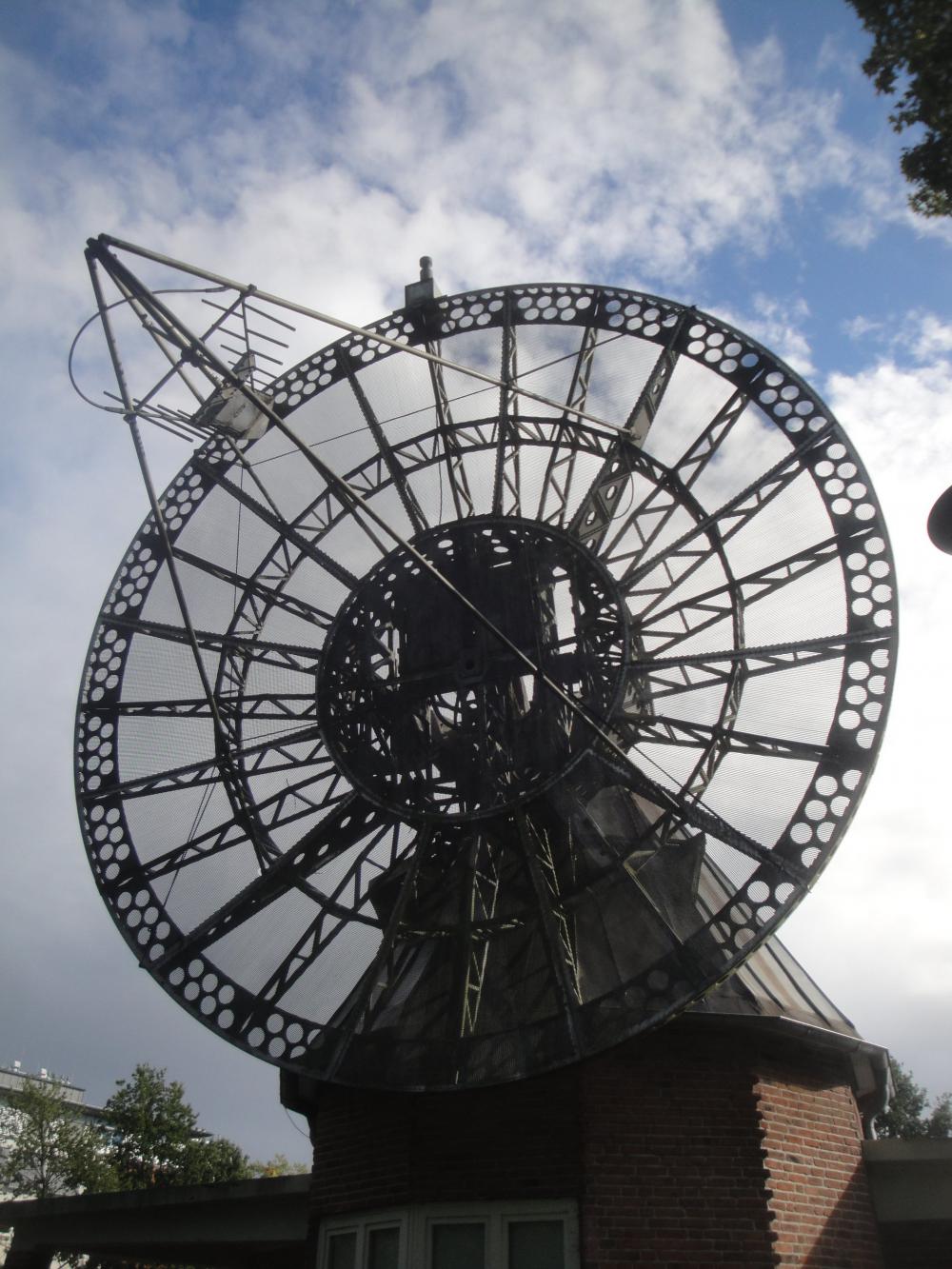 Albrecht Unsöld also recognised the importance of radio astronomy and made theoretical contributions, but also brought about the construction of a radio telescope in Kiel. The Kiel Radio Observatory existed from 1952 to 1976. 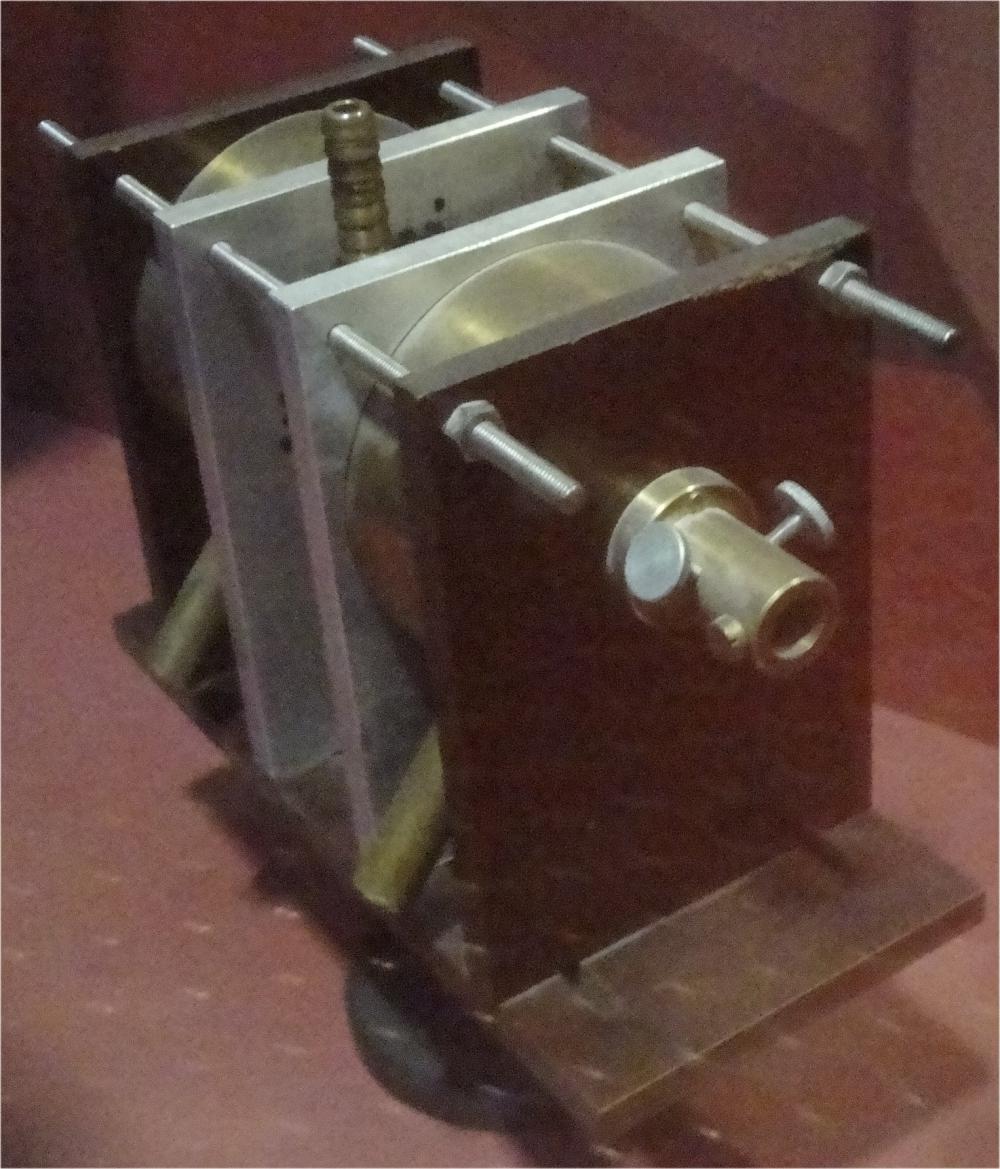 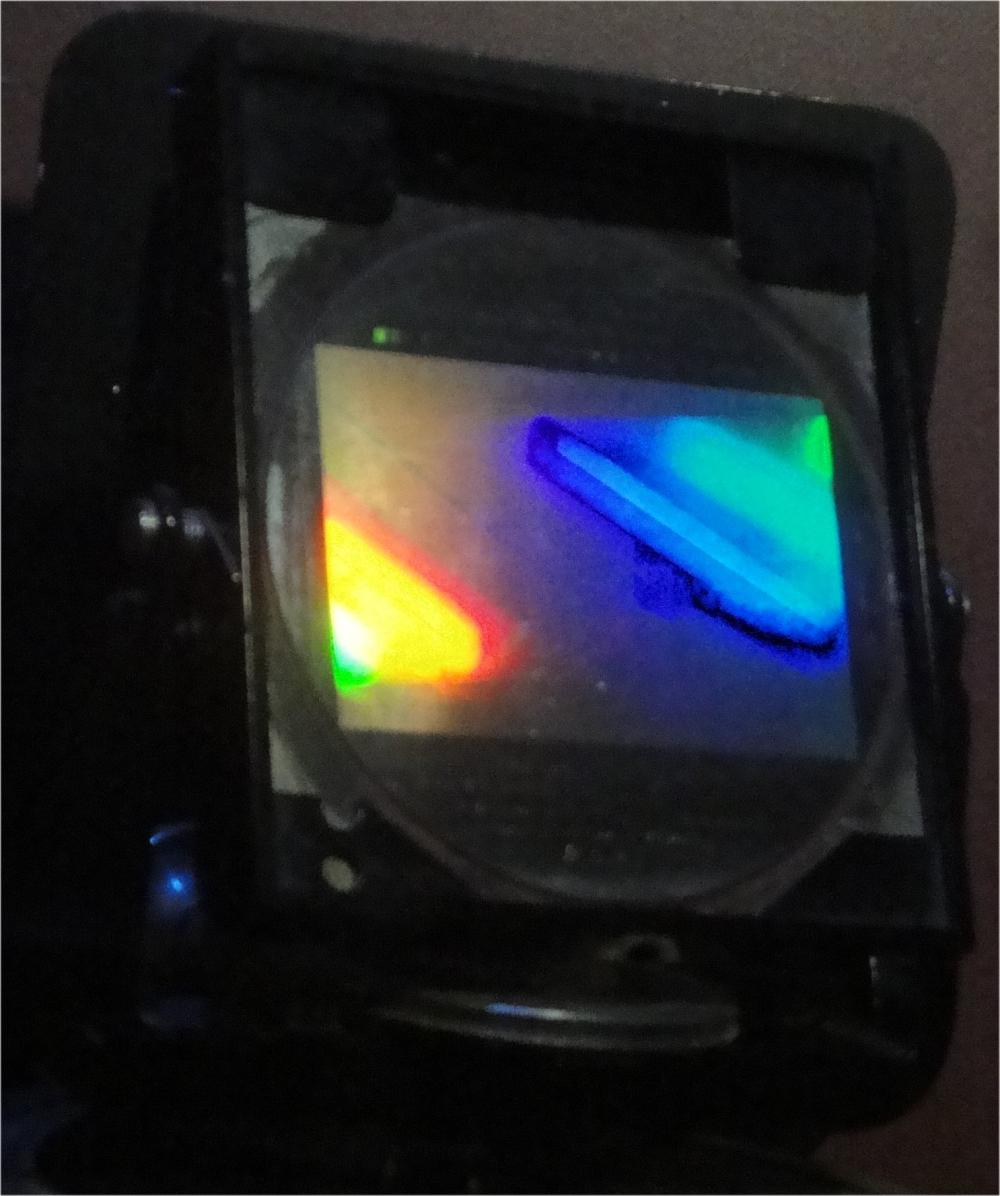 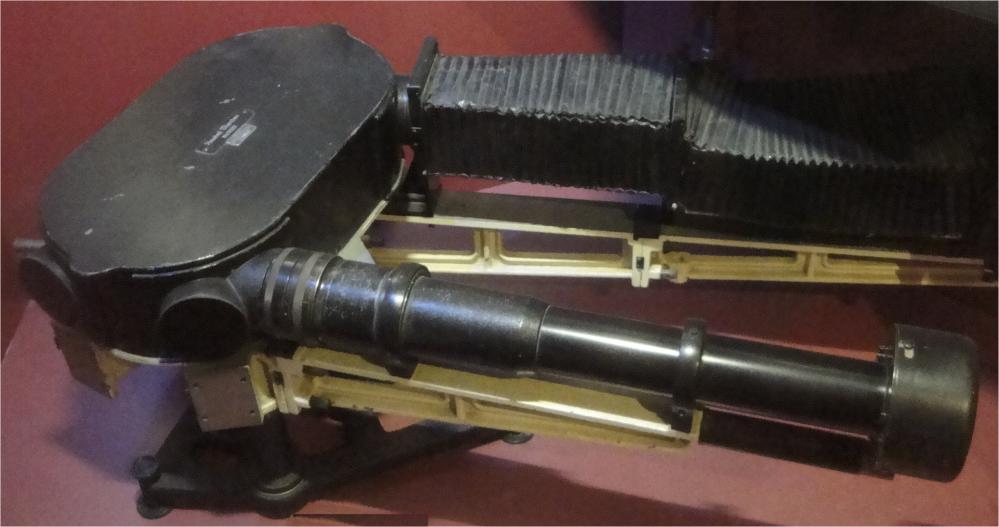 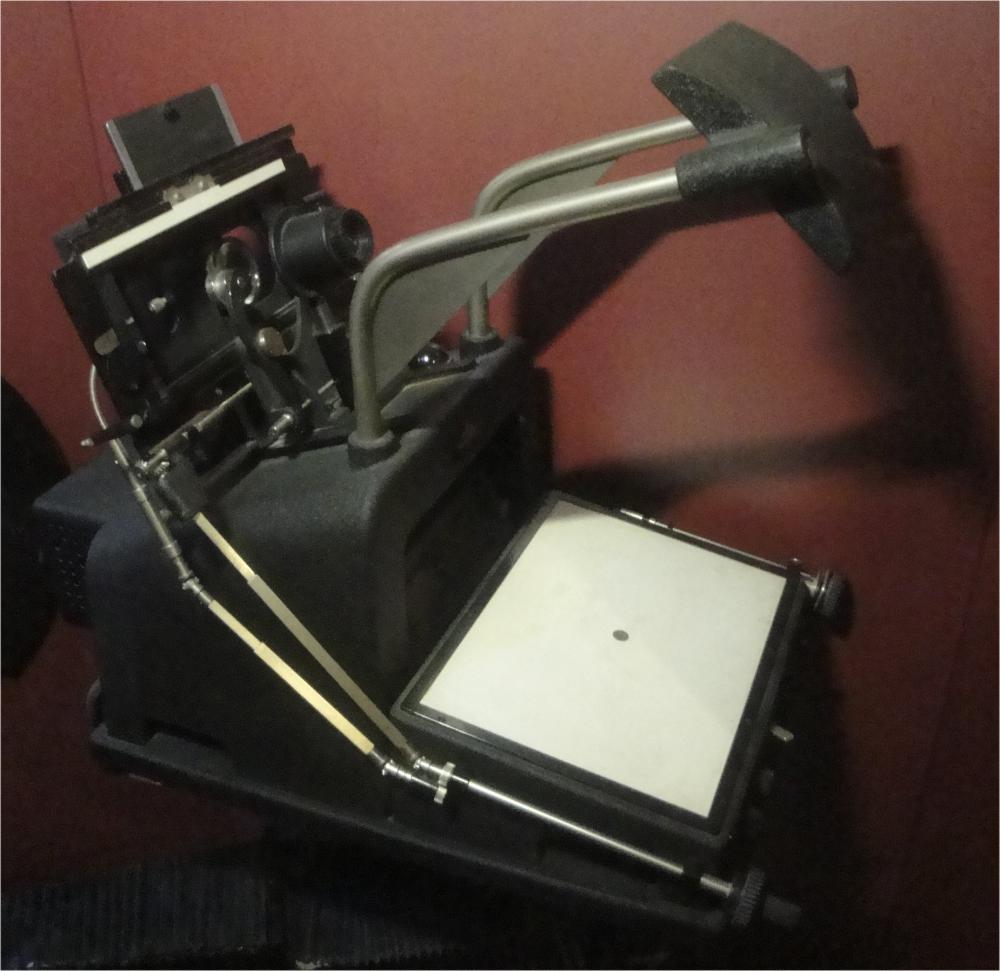 Heinrich Freiherr Rausch von Traubenberg (1880--1944), born in Estonia, died in Kiel, received his doctorate under Wilhelm Wien in Würzburg in 1905. After his habilitation in Göttingen in 1912, he was appointed full professor at the German University in Prague in 1922. His main focus was atomic and nuclear physics. From 1931 he held the chair in Kiel, but retired in 1937 and moved to Charlottenburg. There he even set up a private laboratory for nuclear physics with his wife and cooperated with Otto Hahn (1879-1968) at the Kaiser Wilhelm Institute in Berlin.

Walter Lochte-Holtgreven (1903--1987),44 born in Hamburg, died in Kiel, received his doctorate (X-ray fluorescence) from James Franck (1882--1964) in Göttingen in 1927. After stays abroad in Groningen and Manchester, he came to Kiel in 1934 as an assistant and habilitated with Rausch von Traubenberg in 1937. In 1943 he became head of the Institute for Experimental Physics, and after the war in 1945 full professor (until 1972). The focus of his research was in the field of plasma spectroscopy and plasma physics. With his spectroscopic experiments he wanted to he wanted to obtain the state parameters of high-temperature plasmas, such as those typical in stellar atmospheres. The measured physical properties of the plasmas form the starting point for model calculations of the then innovative field of laboratory astrophysics. In this context, a good cooperation arose with Albrecht Unsöld. 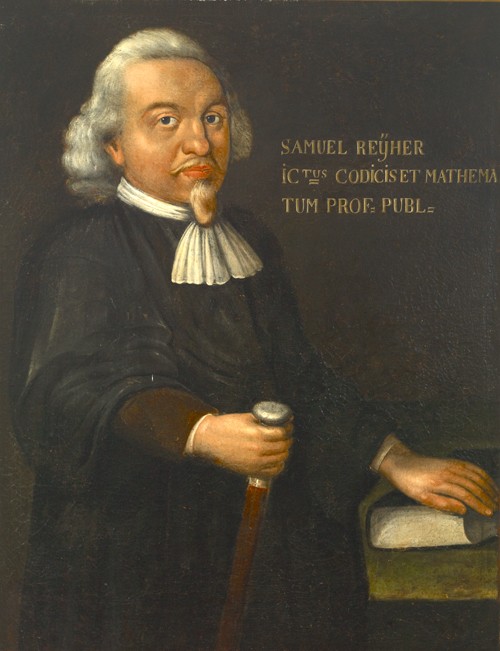 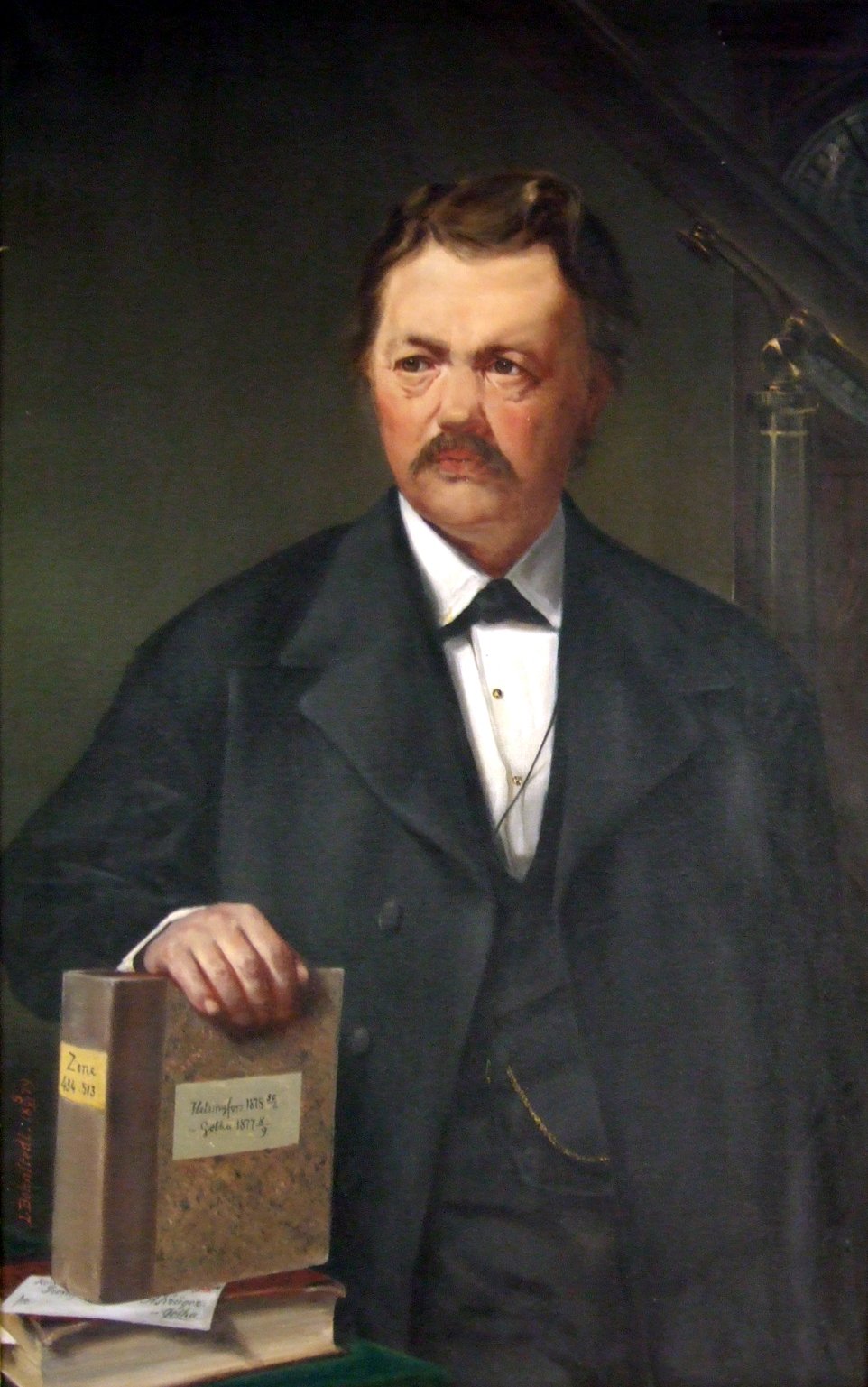 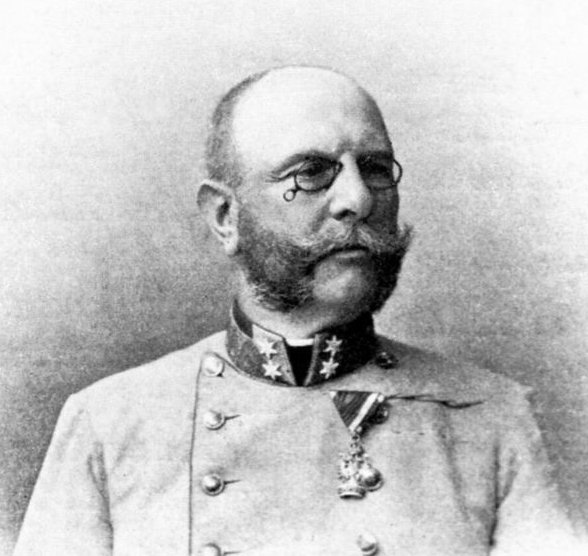 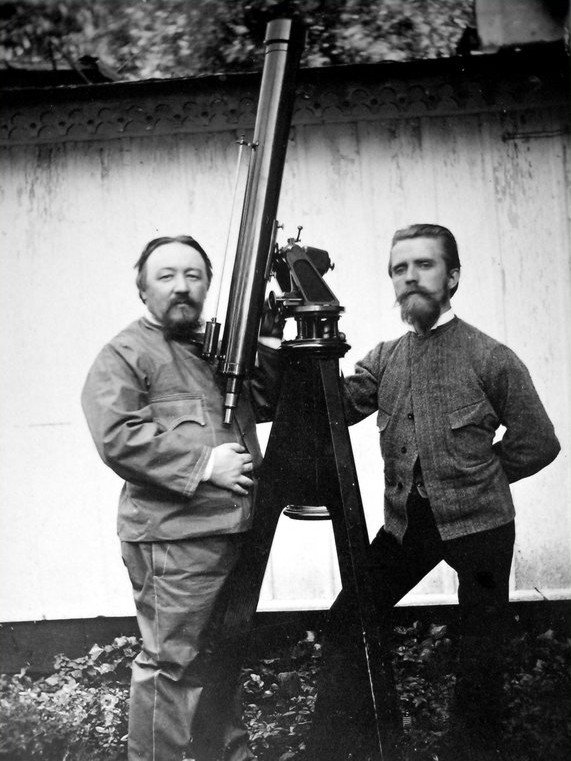 Carl Wilhelm Wirtz (1876--1939) collected observational data and recognized the extragalactic nature of the spiral nebulae and that the redshifts of the spiral nebulae increase with their distances. So far, one can call him a forerunner of Edwin Powell Hubble (1889--1953). But Wirtz was still convinced that the universe is static like  Willem de Sitter (1872--1934) thought and did not speak about expansion of the universe.


The former scientific instruments, the inventory of astronomical, geodetic and nautical instruments, was put together in detail by Felix Lühning (2007).

After its destruction in the Second World War, the observatory was privatised. Due to the founding of the European Southern Observatory (ESO), the need for observations in Kiel was no longer so urgent, also consider the increasing air pollution and weather in Kiel. A small observatory, which is now located on the roof of the Institute for Experimental and Applied Physics, serves the students for the astrophysics practical course. A reflecting telescope with an objective diameter of 25cm, a grating spectrograph and a CCD camera. 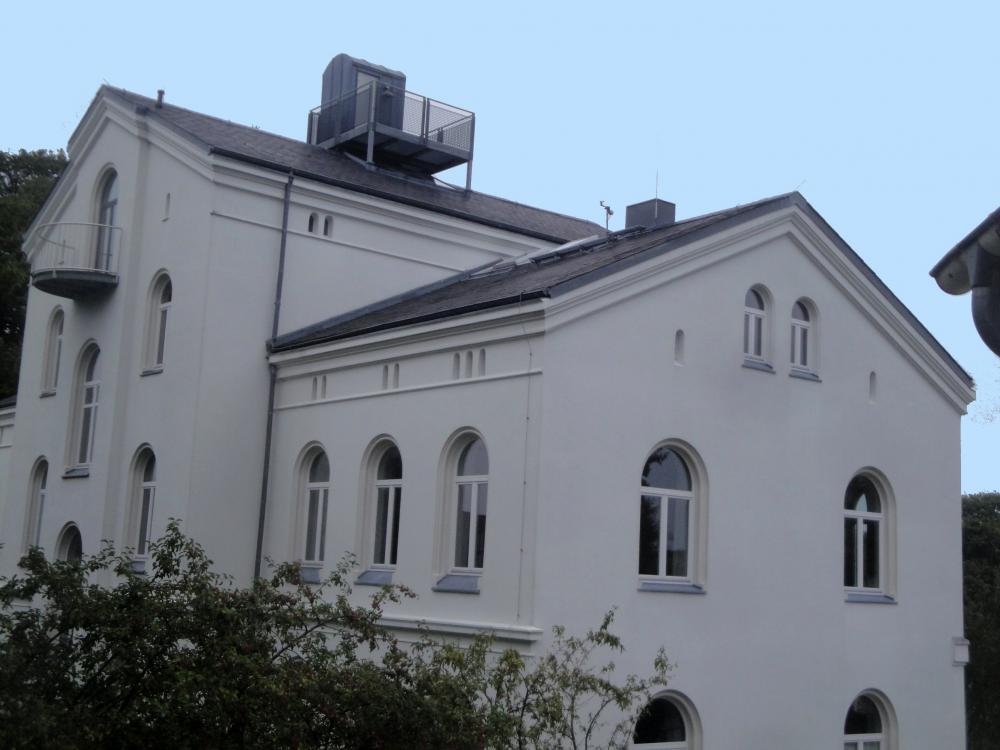 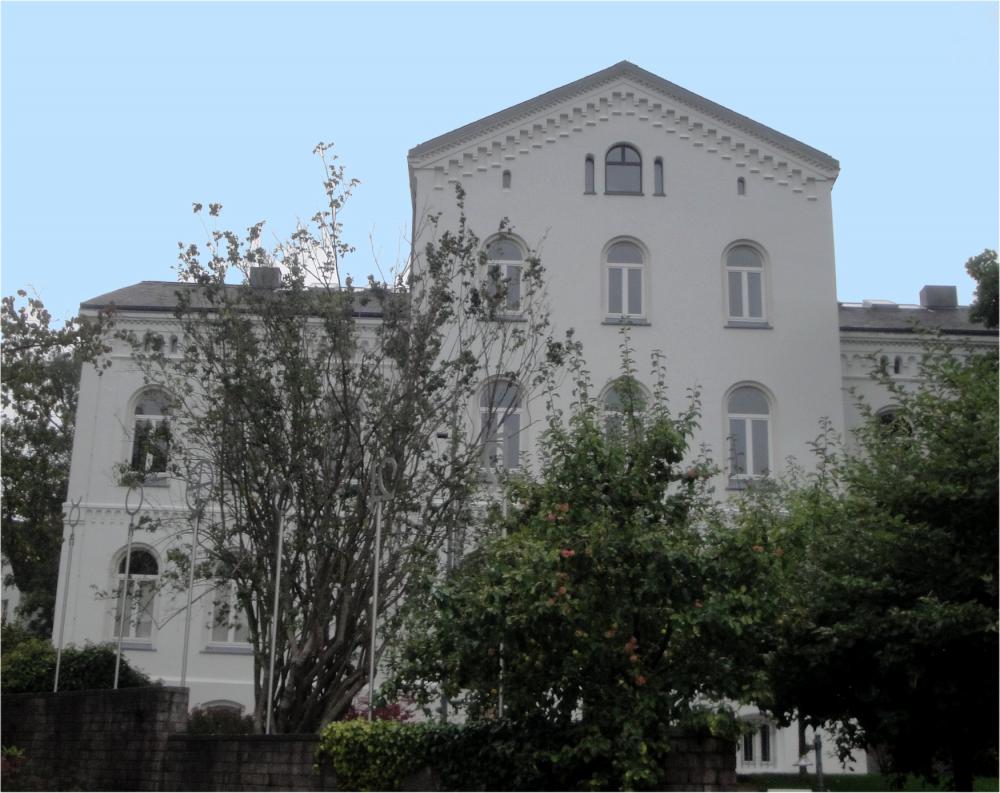 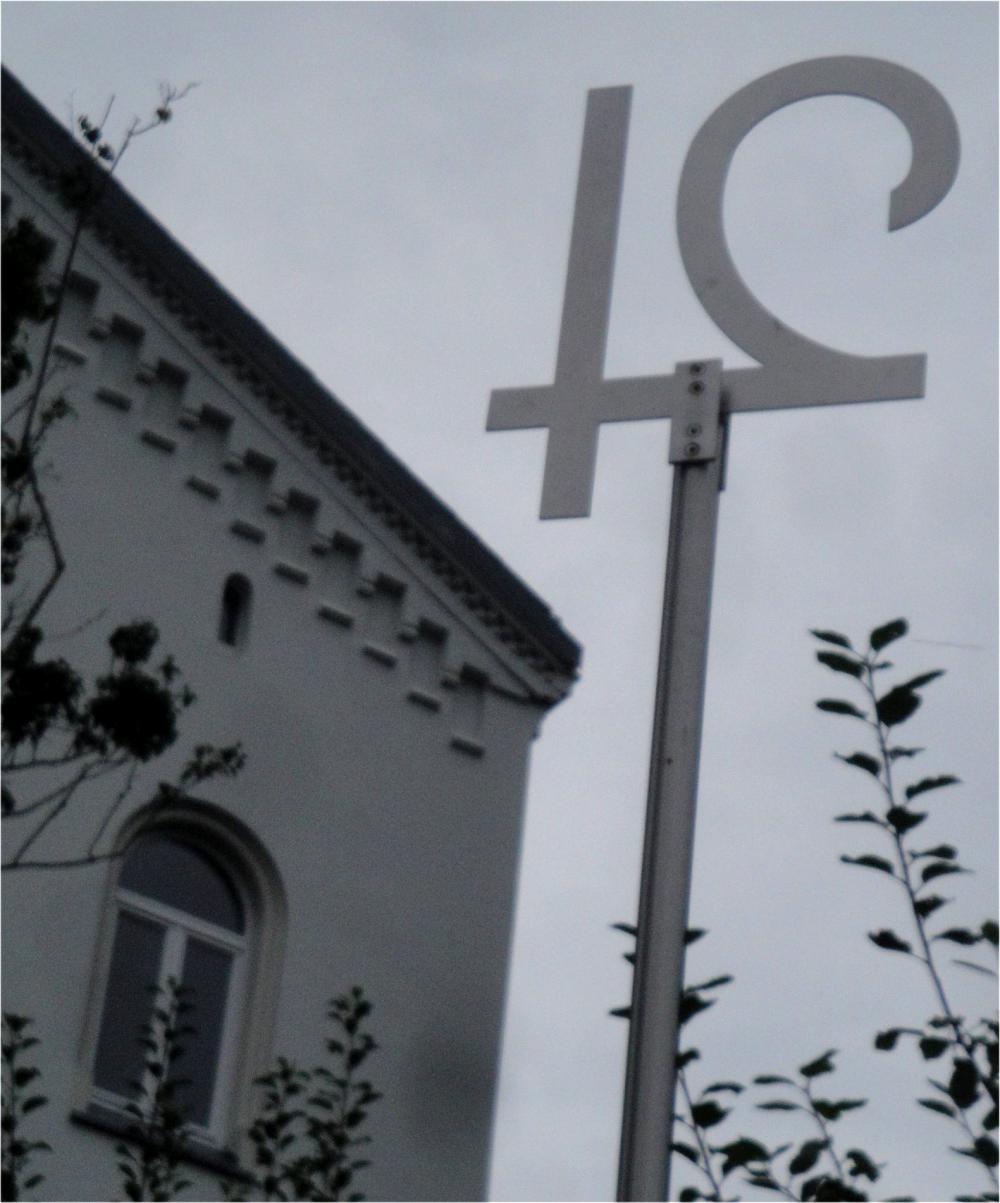 In WWII, the observatory was severely damaged and not rebuilt as an observatory, but privatized; however, the outlines are still recognizable today. The renovation of the Old Observatory in Kiel-Düsternbrook, Himmelsleiter, Sternwartenweg, was carried out in 1992/1993 by the architects Hochfeldt and Partner / Prof. Otterbein (http://www.erwin-karstens.de/sternwarte.html).

The instruments and the library were recovered in the new Astronomical Institute.

The Old Observatory in Kiel-Düsternbrook was moved to a new site after WWII. 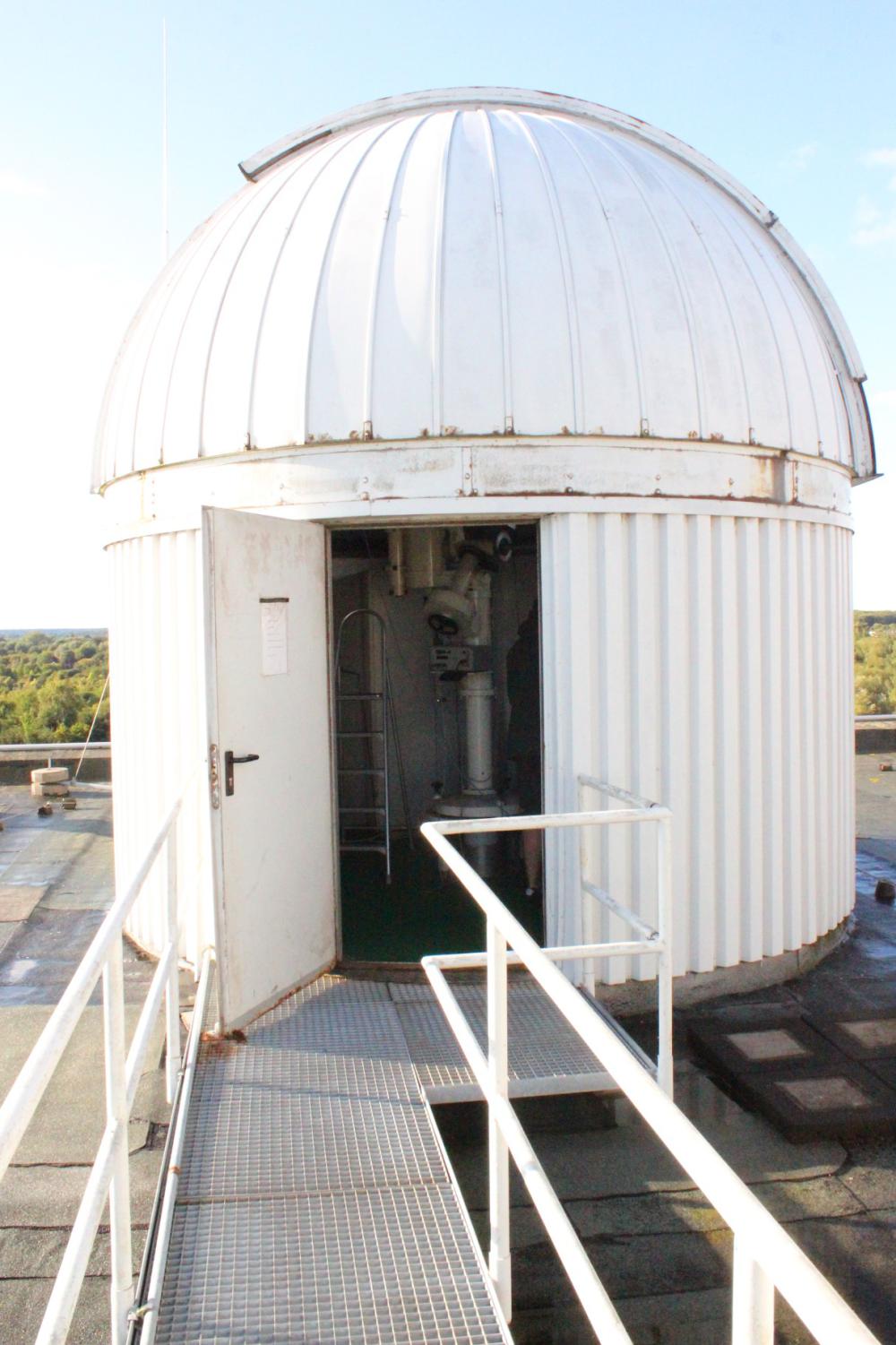 Fig. 10a. Small dome of the University Observatory Kiel 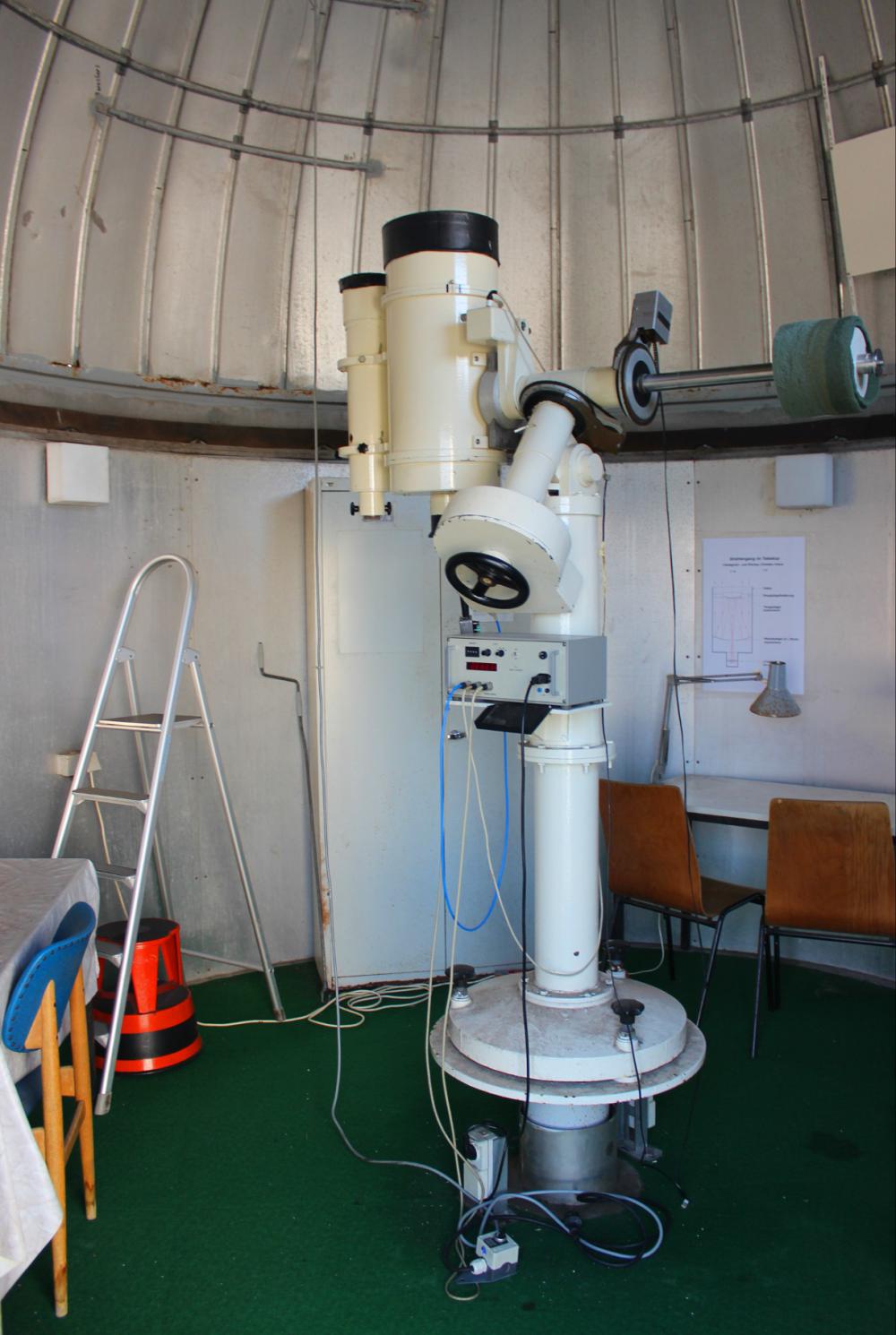 Fig. 10b. Telescope of the University Observatory Kiel