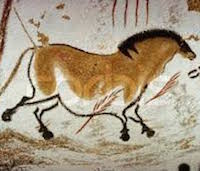 Since the early 20th century, and especially during the last few decades, interdisciplinary research has strengthened the evidence that during earlier prehistory (35,000–9,000 BP) people observed certain celestial phenomena and reflected about the spatiotemporal structure of the world they perceived themselves as dwelling within. What appear to be traces of very early systems of time-reckoning and visions of the cosmos can be found in depictions on both fixed and transportable objects (parietal/mobile art) within and outside of caves or related to other distinctive natural or man-made places. While interpretations of such evidence have often proved controversial, in broad terms there is little doubt that astronomy played an important and integral part in the early cognitive development of humankind.

The evidence suggests that there existed during earlier prehistory an archaic form of astronomy that included such components as simple natural calendars, more complex ‘palaeoalmanacs’, and the knowledge of certain asterisms. The motivations for watching the sky may have been both practical and philosophical: a suitable ‘cosmovision’ would have helped give meaning to life. In order to transform basic astronomical knowledge into suitable systems of time-reckoning and cosmographic models, people would not only have needed a first-rate imagination and the ability to conceive abstractions, but also a degree of technical ingenuity.

Table 1 presents a brief chronology of earlier prehistory from the Lower Palaeolithic to the Epipalaeolithic. The available archaeological evidence and the hitherto discussed palaeoastronomical evidence restrict the geographical area of interest to Africa, Australia and Eurasia.

The archaeological record from earlier prehistory in general can be divided into fixed and mobile artefacts. Rock-art—paintings, engravings, and sculptures—exists within deep caves as well as at particular places outdoors, such as river valleys and rock shelters. Thematic ‘maps’ have been identified on bones and in caves, demonstrating that people were aware of landscape features. Caves and rock shelters, as well as other landscape features, had both practical and symbolic significance. The construction of dwellings, the structure of open-air campsites, tools, and mobile artwork set up further cognitive categories. Among the graphical representations found in parietal and mobile artwork there exist both abstract symbols and naturalistic depictions. 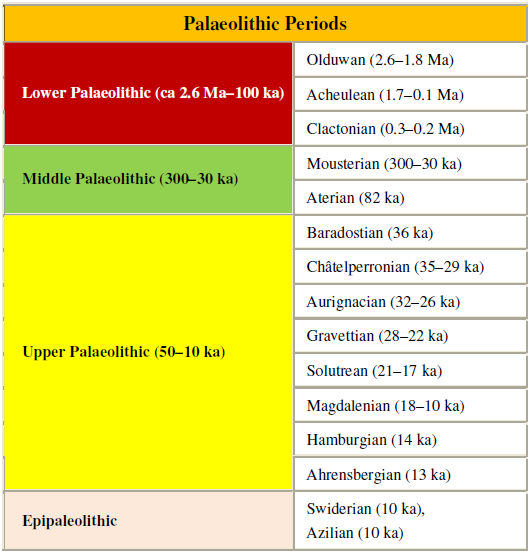 From at least the Aurignacian period (c. 32,000–26,000 BP), hunter-gatherer cultures depicted the periodic annual phenomena of flora and fauna, both in fixed contexts and on mobile objects. As hunters, they were surely well aware of the biological rhythms of animals, such as their diurnal and nocturnal activities, the mating season, the duration of their pregnancy, their time of birth and incubation, their change of fur, the formation and dropping of their antlers, their annual migration (particularly in the case of birds), and the production of spawn. And as gatherers they could not fail to be familiar with the periodic rhythms in the development of plants. The seasonal change between summer and winter camps is clear from the remains of the fauna and flora that were either consumed or used in other ways. Some local cave-sanctuaries also seem only to have been visited at certain times, since the creation and renewal of graphic art only occurred during ‘special’ time periods. In addition, there exists some evidence that the illumination of caves and rock shelters by sunlight on certain days of the year may have been significant, an example being the solstitial illumination of the innermost chamber of El Parpalló, a cave-sanctuary near to Gandía in Spain that was occupied in the Solutrean and Magdalenian periods.

Palaeoastronomical research has indicated the existence, within both parietal and mobile art, of astronomical/natural calendars using systems of images and signs to denote certain time periods. Observations of the moon appear to have been particularly important, with both its phase cycle and its changing position along the horizon recorded over periods up to several years. People not only reckoned time using the moon; there are also notations that evidently related to solar cycles and even luni-solar cycles. An example of the latter is the elaborate Thaïs Bone (France). Among mobile objects dating from the Aurignacian to the Azilian have been found several tally sticks and tally pebbles (Azilian) that illustrate different kinds of time-reckoning.

Earlier prehistoric parietal and mobile art contains many representations of animals (mammals, birds, reptiles and even insects), as well as occasional depictions of plants. Many of these representations appear to have correlated the biological rhythms of certain animals and/or human women (menstruation, pregnancy) with astronomical periods. The term ‘almanac’ is probably appropriate. An example comes from the Geißenklösterle cave in Germany, where an ivory plate dating to 35,000–32,000 BP contains one of the oldest known representations of a human figure. This appears to relate to the constellation Orion and a lunar and pregnancy calendar. In some of the more complex examples, especially those that span longer periods, a clearly structured system of counting—a so-called ‘arithmetical’ notation—has been used to indicate astronomically significant time units: an example of this is the Ishango Bone (Democratic Republic of the Congo).

There is evidence that during the Upper Palaeolithic certain asterisms, including Corona Borealis, the Pleiades and the Hyades, were not only recognized but were important for time reckoning or well-suited for the purpose of determining orientation. Perhaps the best publicised examples of possible representations of the Pleiades and Hyades are from the aurochs (no. 18) in the Hall of the Bulls at Lascaux cave in France, although the real significance of this site is the breadth and complexity of possible astronomical associations amongst what is undoubtedly a supreme assemblage of Upper Palaeolithic art.

The astronomical heritage of earlier prehistory is diverse and fragmentary and its identification, substantiation and evaluation raise a number of serious issues of credibility. Scientific rigour can only be achieved through the integration of methods from the humanities, natural sciences and experimental archaeology, but there is also a need for phenomenological methodology. The interpretation of iconography involves the concurrence of syntactic, semantic and pragmatic aspects, and the recognition of multiple levels of meaning.

To date, Palaeolithic astronomical heritage has not been promoted or protected in any consistent way. Some museums specifically point out the astronomical significance of mobile artefacts in their collections but there is not a single in-situ indication of the astronomical connotations of fixed items such as rock art; for some years it has been left to broader media coverage (in the form of printed matter, audio-visual material, electronic media and planetarium programs) to raise awareness of proto-astronomy (as well as proto-mathematics and other proto-sciences) during Palaeolithic times. Palaeolithic astronomical heritage is not explicitly protected, although fixed items are often implicitly included within existing measures to preserve historic buildings and monuments of broader significance.