Georg Constantin Bouris [Vouris] (1802-1860), trained by Joseph Johann von Littrow (1781-1840) of Vienna, promoted the erection of Athens’ Observatory as one of the oldest research institutes in Southern Europe. He became the first director from 1841 to 1855 and professor at the University of Athens, founded in 1837. For the observatory, the "temple of astronomy", the hill of the nymphs - close to the place where the first Athenian astronomer Meto  observed during Antiquity - was chosen, Hill of the Nymphs borders with Philopappou Hill and is opposite to the Acropolis and the Athenian Agora. The building was designed in neo-classical style in the shape of a Greek cross (oriented to the cardinal directions) with a central dome by the Danish architect Theophilus Edvard von Hansen (1813-1891) with the help of architect and town-planner of Athens Gustav Eduard Schaubert (1804-1860) of Breslau, in 1842/46 and financially supported by Baron Georgios Sinas (1783-1856).
Georg Bouris also acquired the instruments during several travels to Vienna from 1845 to 1852. First light was in 1847. This state institution depended in the 19th century on the private funds of Baron Simon Sinas (1810-1876) and later after 1876 by his widow Ifigenia Sinas. The family Sinas paid even the salary Schmidt. 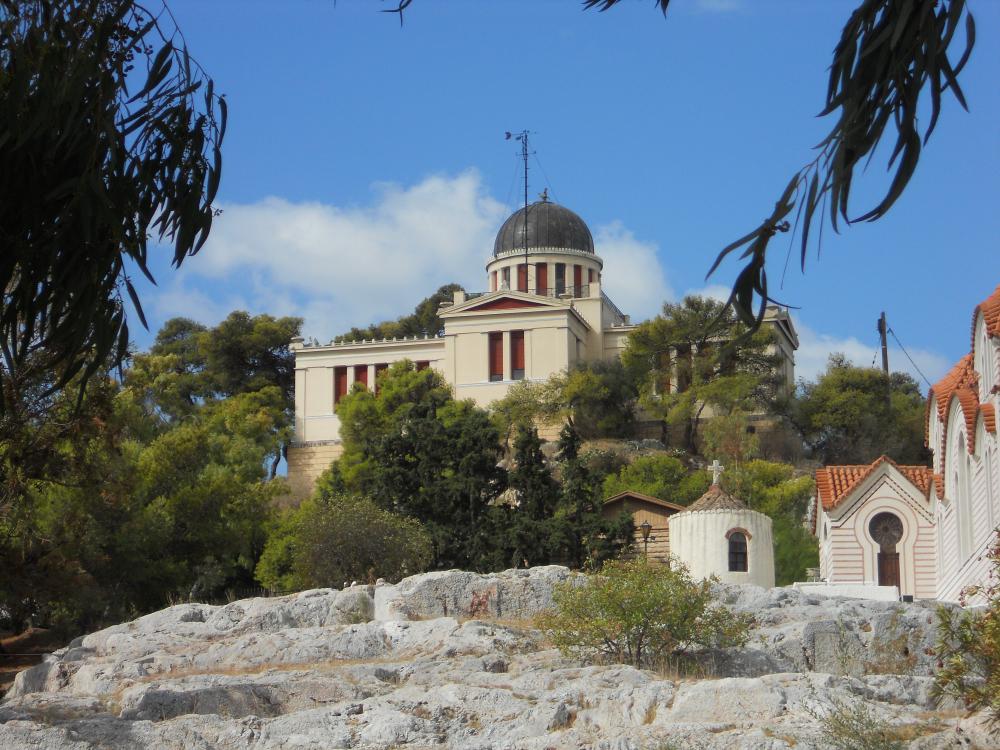 Dimitrios Kokkidis (1840-1896) had limited financial ressources because there was no longer support by the Sinas family. Kokkidis concentrated on meridian circle observations for time service, solar spots and meteorological measurements. 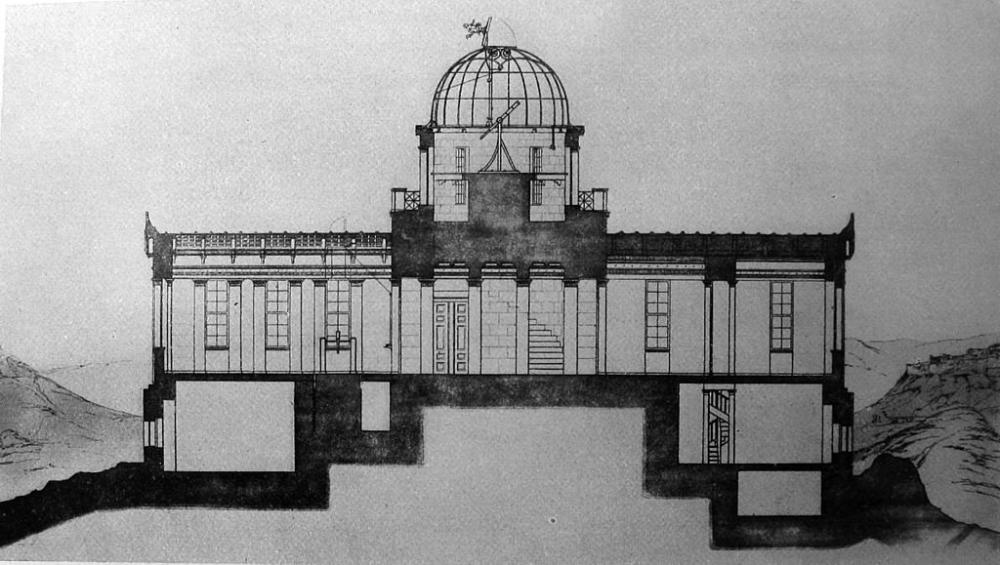 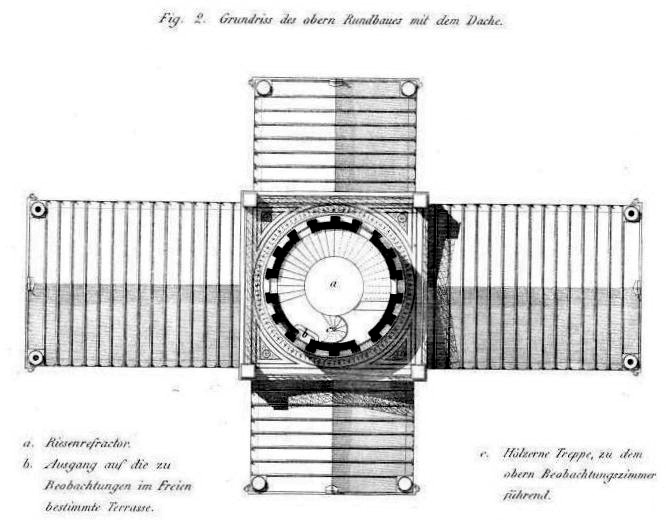 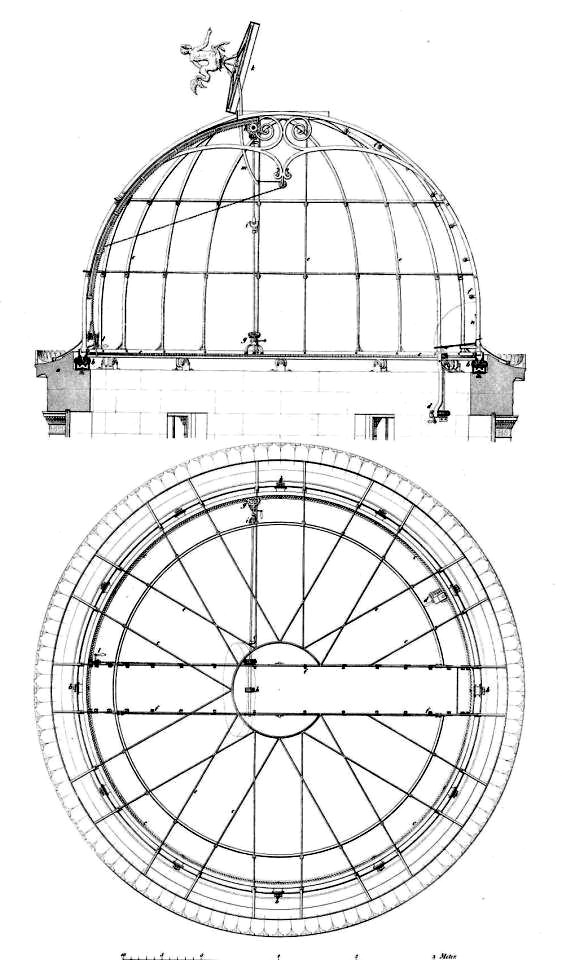 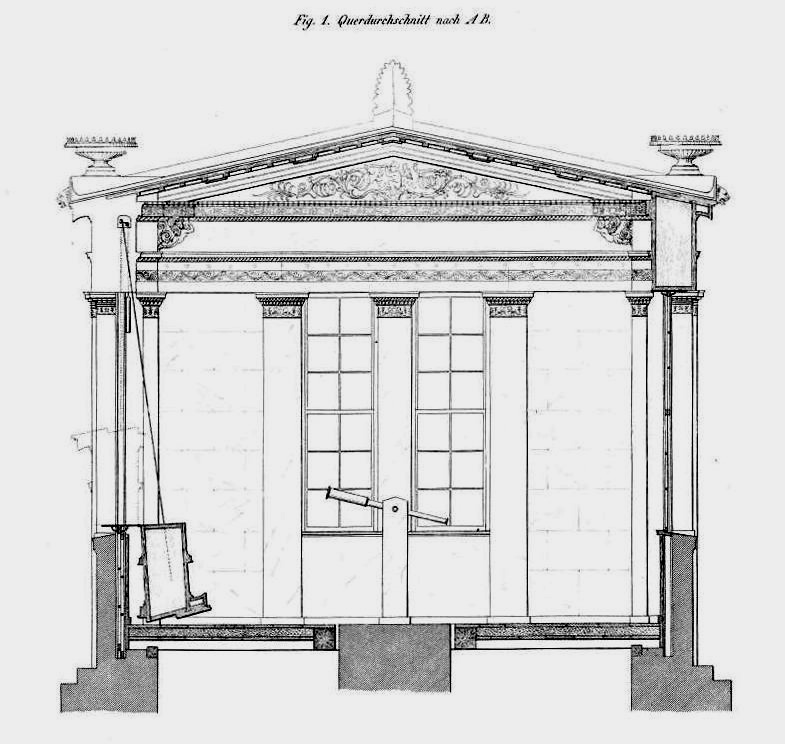 In 1890, the observatory was renamed National Observatory of Athens (NOA). With state support, the National Committee under the direction of Prince George (1896), and a number of private sponsors, Demetrios Aiginitis (1862-1934), educated in Paris, could order new instruments. The large 63cm refractor, Thomas Cooke, made for Robert Stirling Newall (1812-1889) in 1869, was donated in 1890 to the University Observatory of Cambridge and in 1957 to Athens, Observatory of Penteli.
He added about a hundred new meteorological stations, created a seismological service, founded the Annales de l’Observatoire National d’Athènes and the Academy of Athens (1926), in addition he introduced the World Time Zone system and the Gregorian Calendar in Greece.

Stavros Plakidis (1893-1991), having studied in Greenwich, Cambridge, Paris, Strasbourg, and Heidelberg, started observational astrophysics, especially variable stars in collaboration with Arthur Eddington. In 1936, due to the light pollution in Athens, he built the Astronomical Station Penteli. 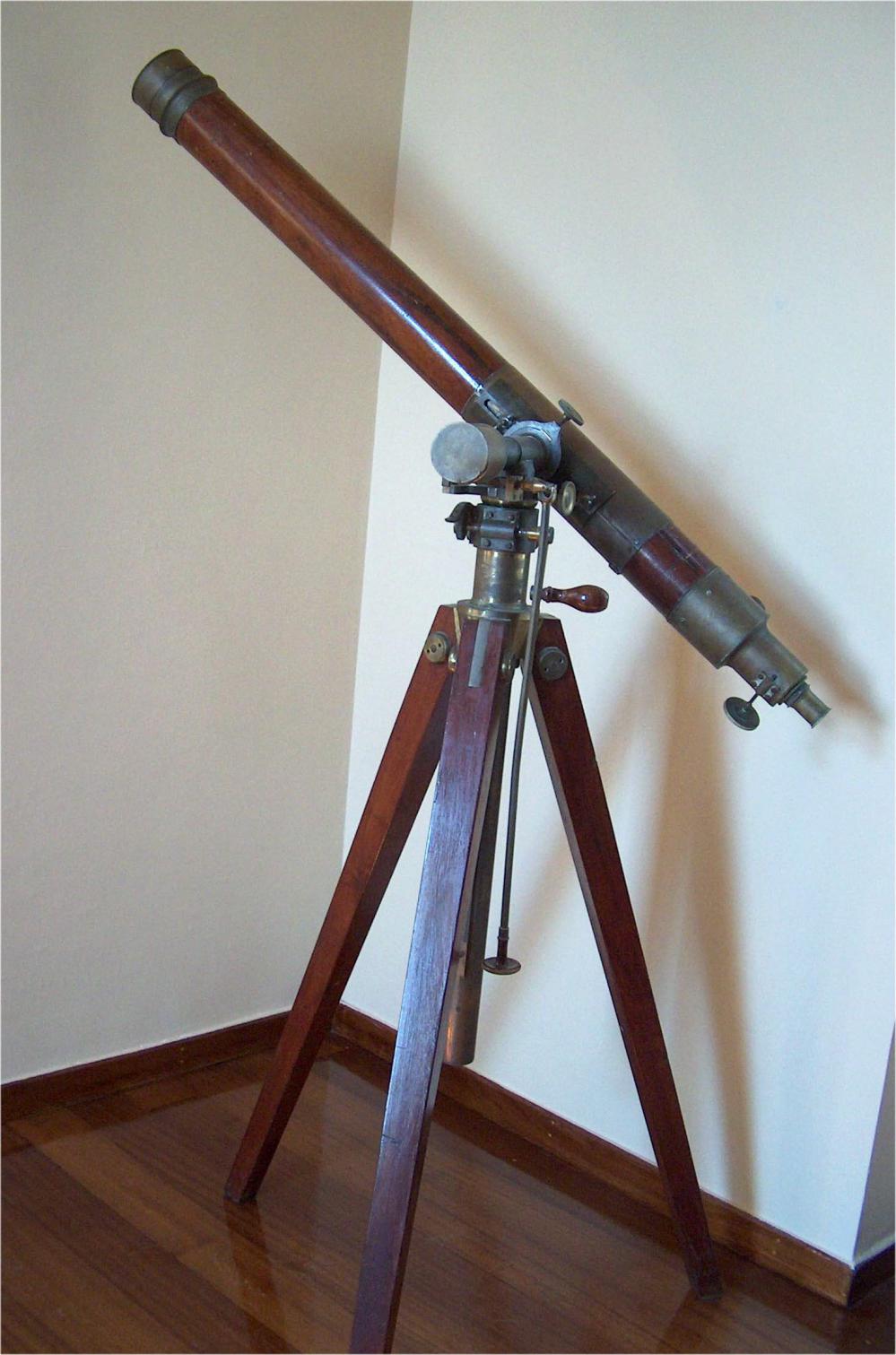 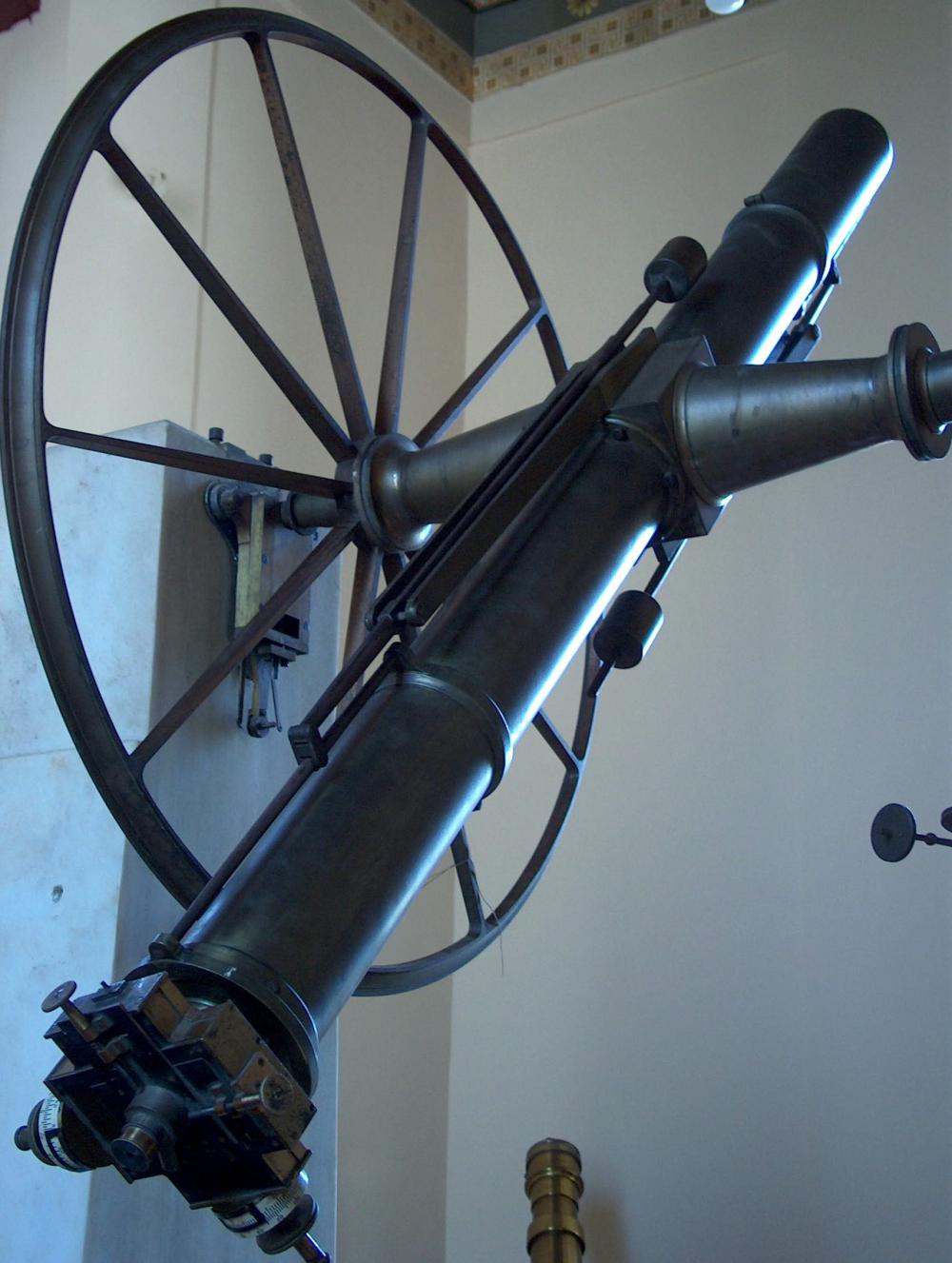 Instruments in the 19th century:

This beautiful building is well preserved and recently restored.

It is still in use for the Astronomical Institute.

The National Observatory of Athens operates apert from the Astronomical institute on Nymphs’ Hill three locations: 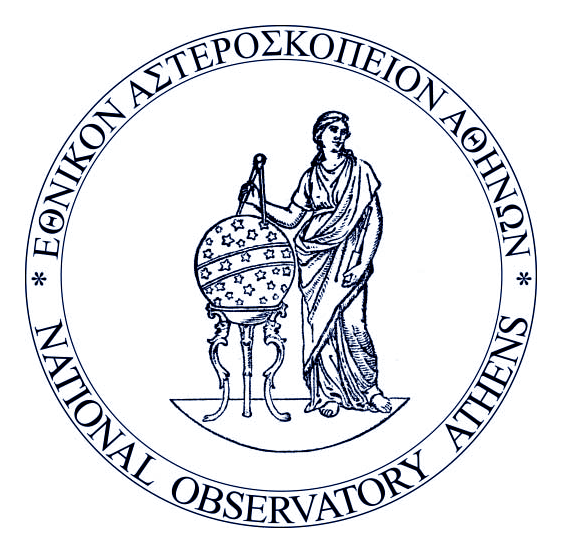