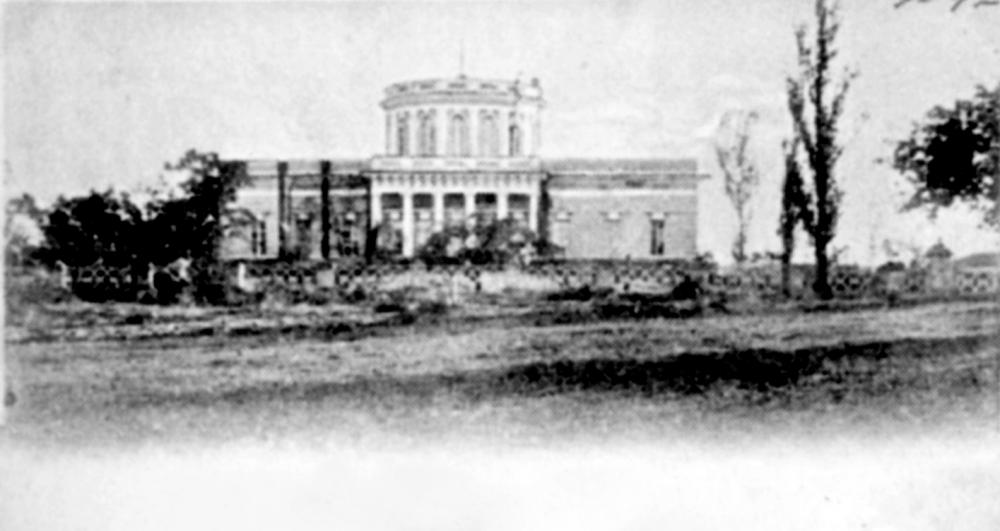 In 1816, Alexei Samuilowitsch Greig (1775--1845), amateur astronomer,  became admiral, commander of the Black Sea Navy and governor of Nikolayev and Sevastopol. He knew the importance of astronomy for time keeping and positional astronomy for navigation at sea. With the support of the Naval Minister Marquis de Traversay, the Russian Tsar Alexander I granted permission to build the observatory in 1821. 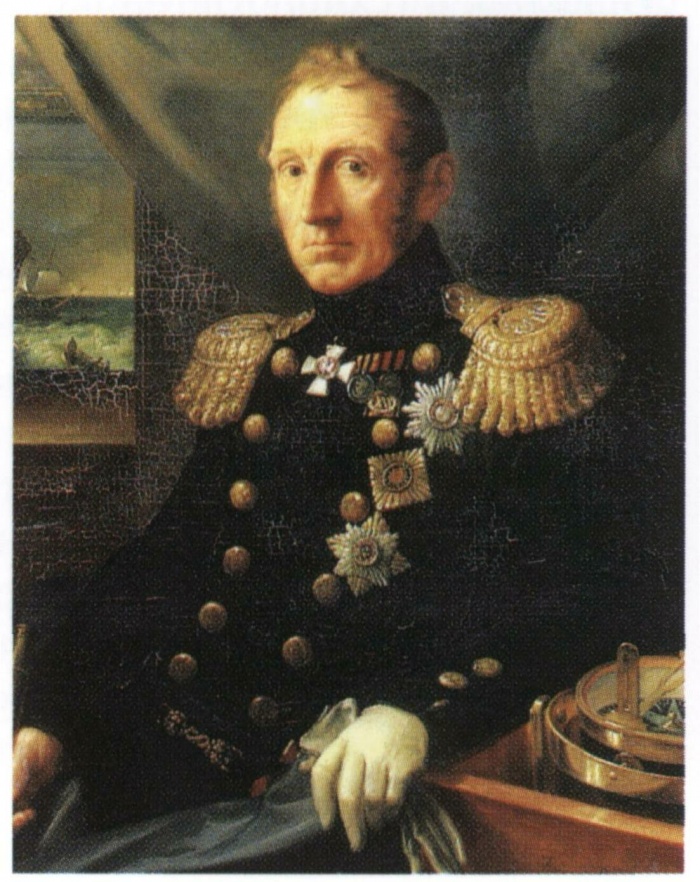 The Chief Architect of the Black Sea Admiralty F.I. Wunsch designed the Nikolaev Astronomical Observatory (NAO) in the style of Classicism (1821/29). The impressive main building is together with three pavilions (1875, 1913, 1955) in a 7 ha astronomy park. In the pavilions, the Repsold meridian circle (MCR), Repsold vertical circle (VCR), and the Carl Zeiss Jena zone  astrograph (ZA) can be found, well preserved until today.

Nikolaev Naval (and later Astronomical) Astronomical Observatory (NAO) is one of the oldest scientific institutions of South-Eastern Europe.
The NAO provided maps and charts to the Black Sea Navy (until 1911), trained captains and mariners in astronomical navigation, provided the time for the Navy, and certified the navigation instruments. 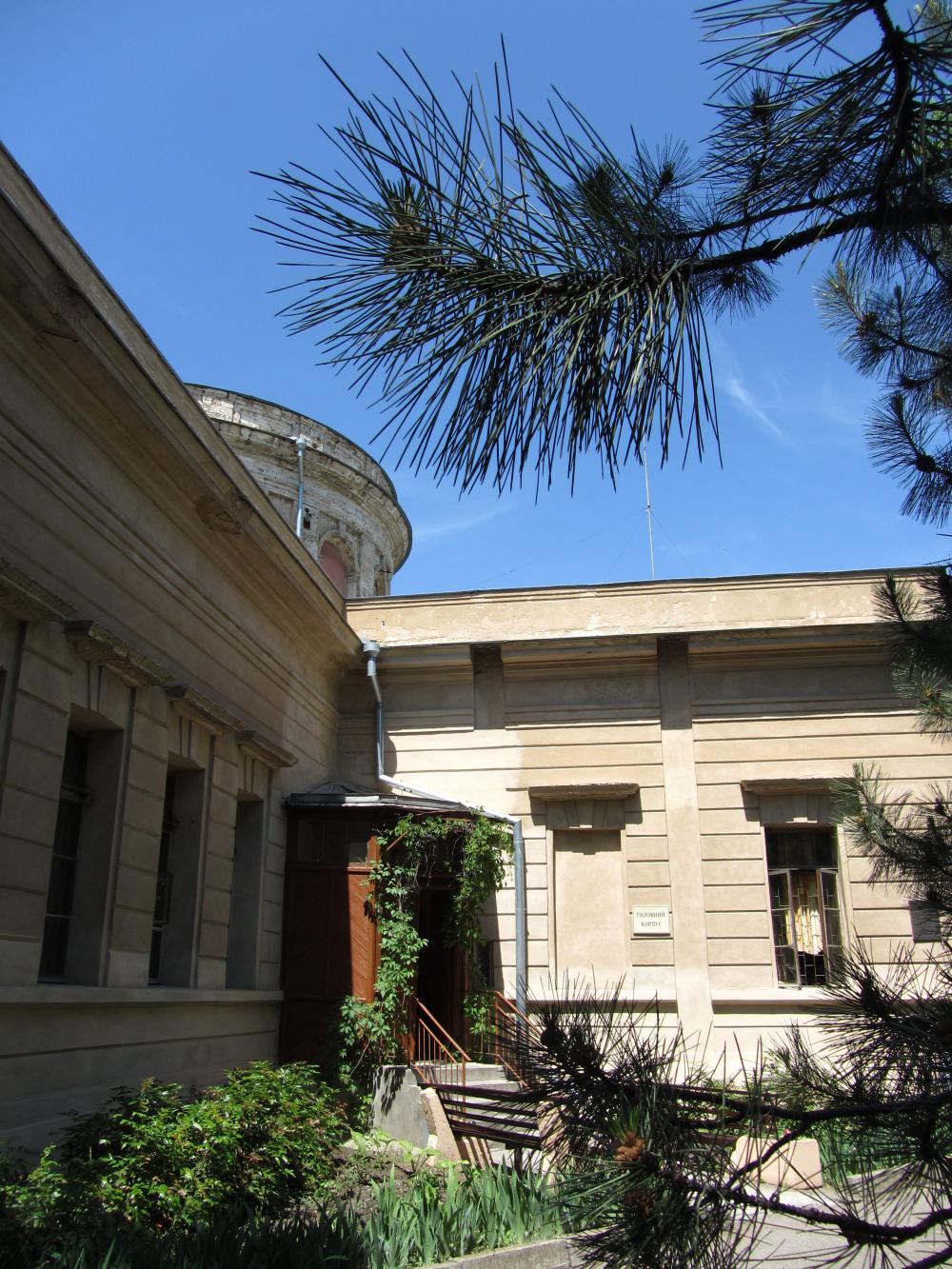 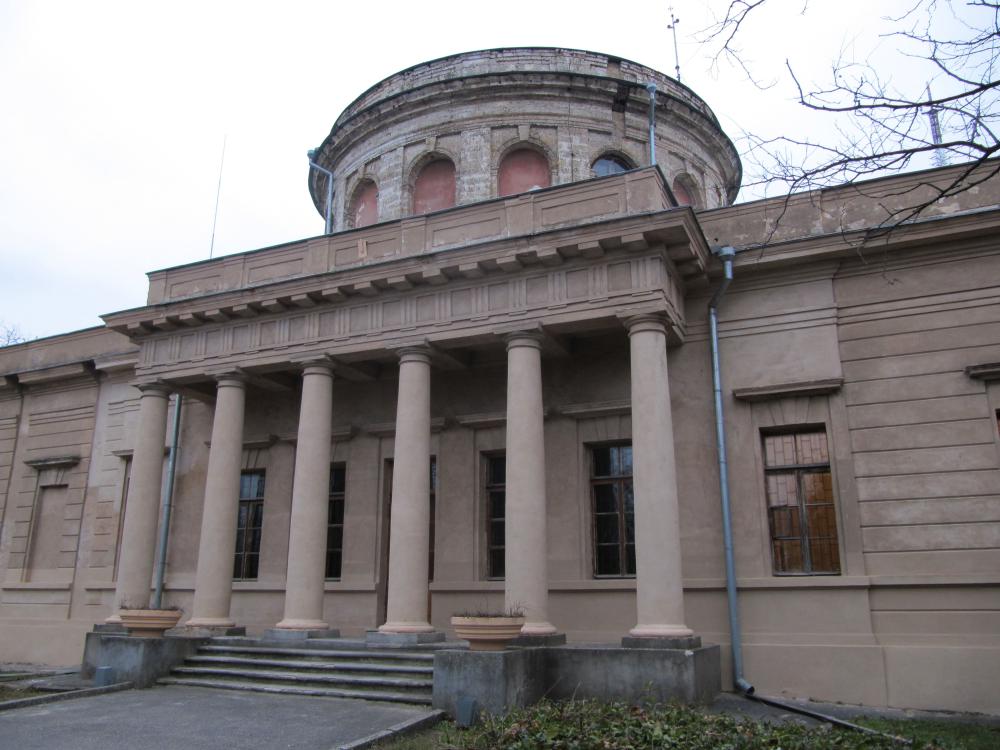 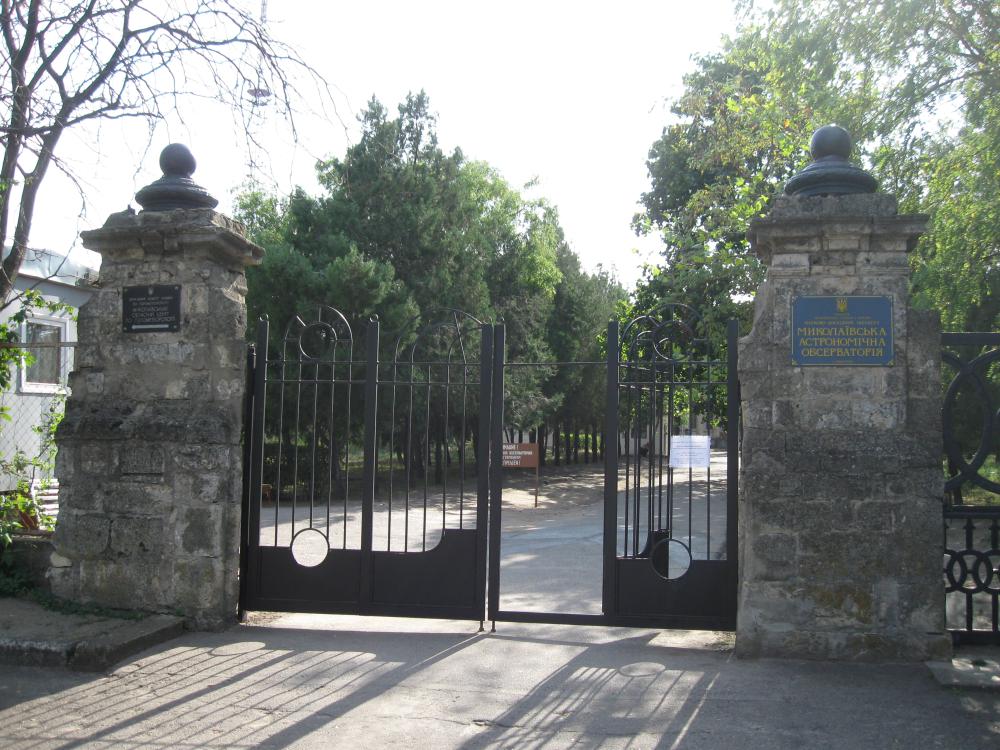 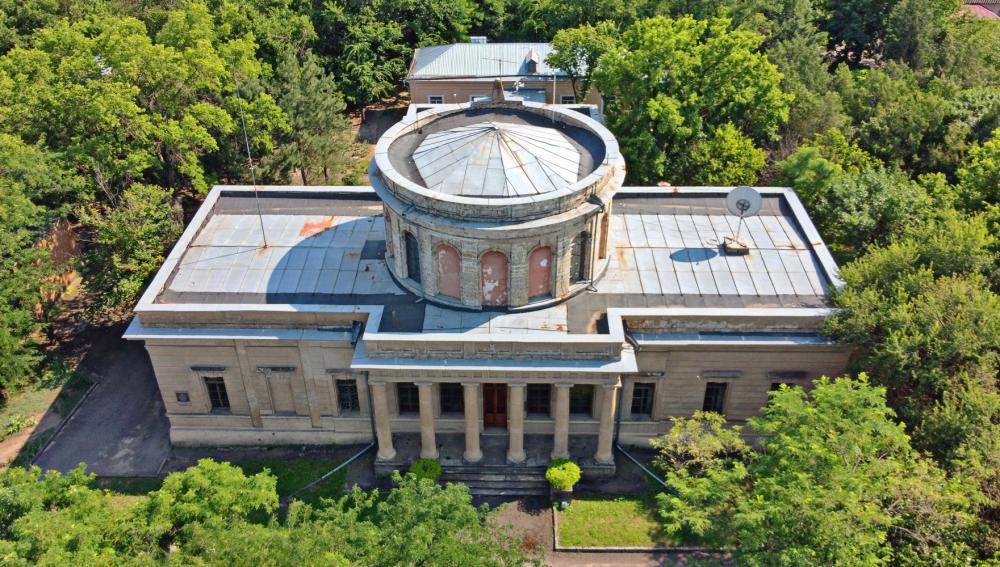 From 1912 until 1991, the Nikolaev Astronomical Observator was a Southern department of Pulkovo Observatory, St. Petersburg. More than 40 catalogues were compiled by the NAO astronomers.
In 1935, it became part of the network of scientific institutes of the Academy of Sciences. Since 1992, the NAO is an independent scientific organisation, since 2002, a research institute. 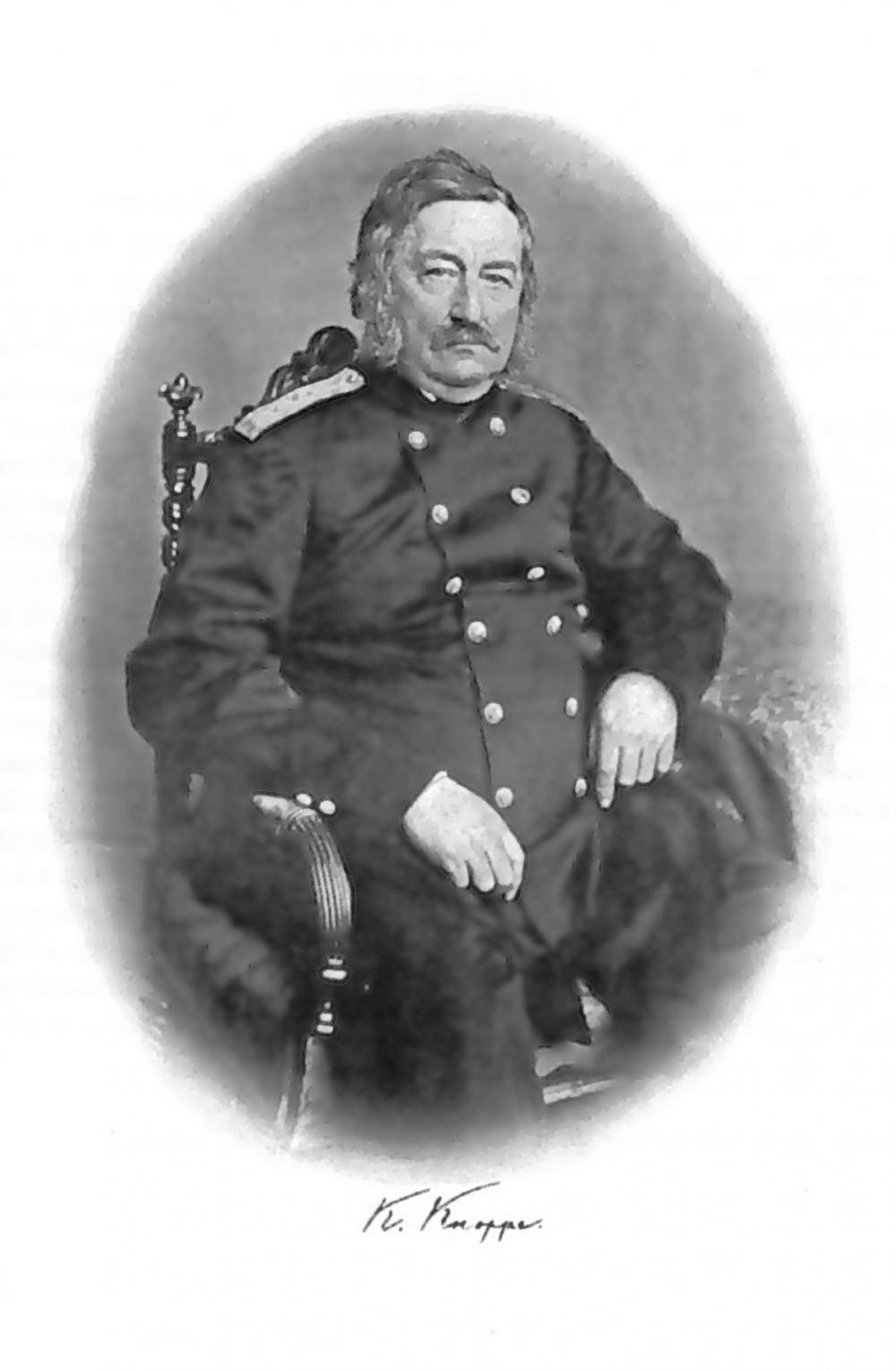 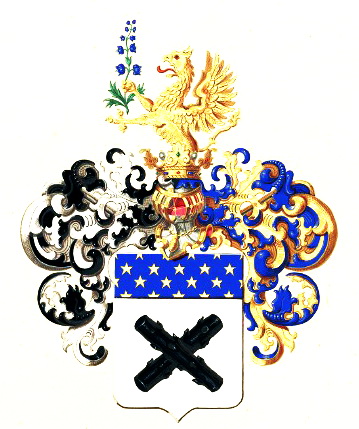 Fig. 3b. Coat of Arms of Karl Knorre (Wikipedia)

From 1821 to 1871, Karl Friedrich Knorre (1801--1883), son of Ernst Christoph Friedrich Knorre (1759--1810) -- an astronomy professor at Dorpat university, was appointed as the observatory’s first astronomer and director. In order to equip the Naval (and later Astronomical) Observatory in Nikolaev (NAO) with the most modern instruments, he traveled from 1825 to 1827 to the most prestigious observatories and watchmakers in Europe. He visited important astronomers such as Friedrich Georg Wilhelm Struve, Friedrich Wilhelm Bessel, Johann Franz Encke, Heinrich Christian Schumacher and François Arago, with whom he sometimes corresponded for life.

His main efforts were: Knorre provided charts, determined the accurate time with transit instruments and transmitted it to the chronometers, checked the navigation and geodetic instruments and provided certificates. Knorre also made a triangulation over the Black Sea costs with reference marks during 30 years (more than 350 points).
In his astronomical research, he was involved in the international cooperation in the search for Minor Planets (asteroids). He participated in the creation of the precise star charts of the Berlin Academy of Sciences based on a collaboration with Friedrich Wilhelm Bessel. On the fifth sheet of these Academic Star Charts, Karl Ludwig Hencke (1793--1866) discovered in 1845 the minor planet Astraea and Flora. Knorre also observed comets (Halley’s comet and the large comet in 1843) and was in good contact with Johann Franz Encke. In addition, he observed solar eclipses, occultation of stars by the Moon.
Knorre worked in the NAO for 51 years, in 1828, he became correspondent member of the Academy of Sciences in ST. Petersburg, in 1848 and 1863, member of the Royal Astronomical Society and of the Astronomische Gesellschaft (German Astronomical Society). In 1871, he retired as Vice-Admiral; he published 74 papers.

The next director was Iwan J. Kortazzi (1837--1903) from 1872 to 1903. Kortazzi determined the positions of more than 6,000 equatorial stars. He recorded the rotation time of Jupiter and studied the movement of the red spot. 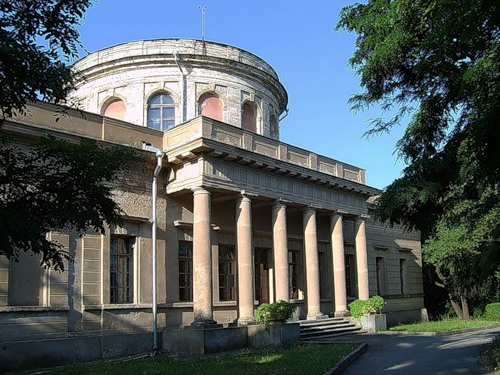 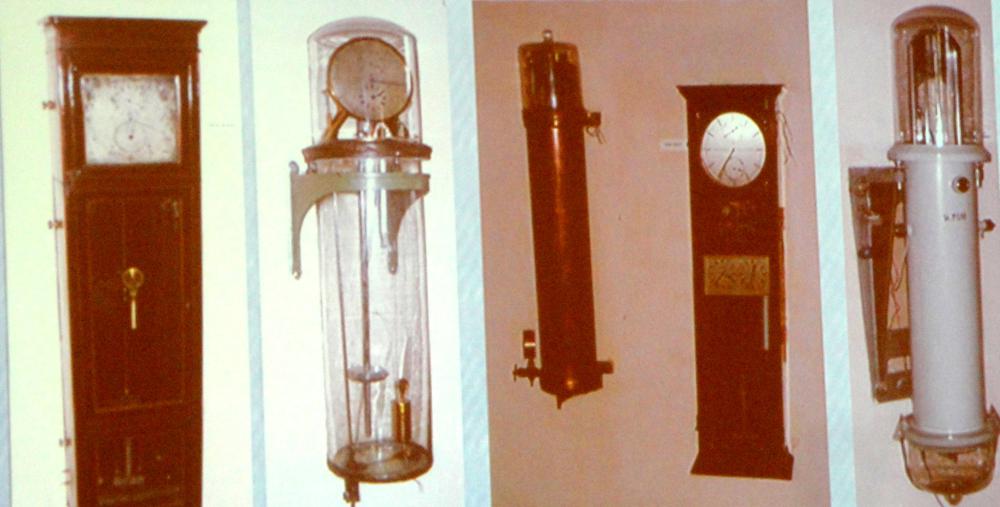 Collection of astronomical geodetic and navigational instruments in the museum of the NAO: 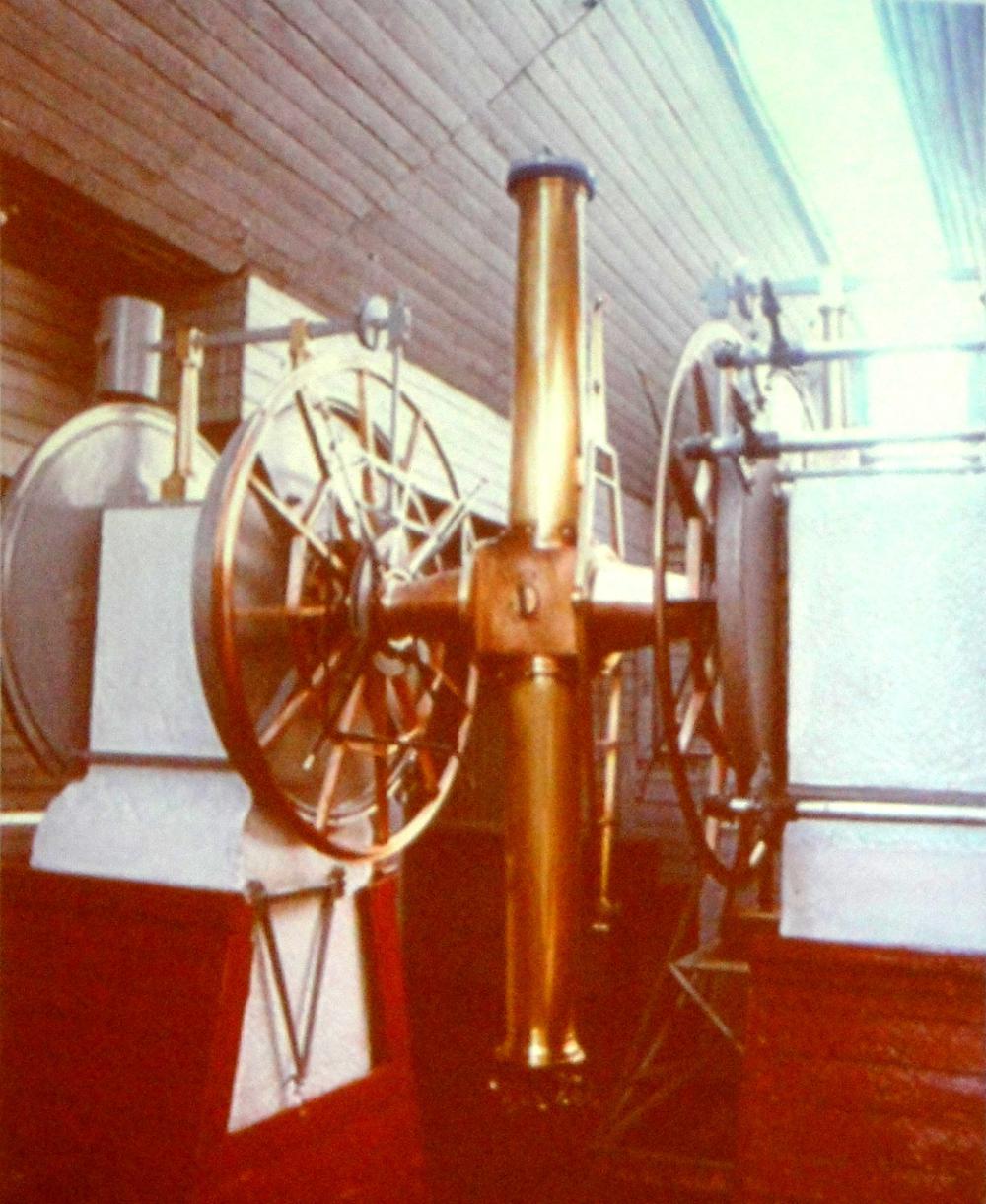 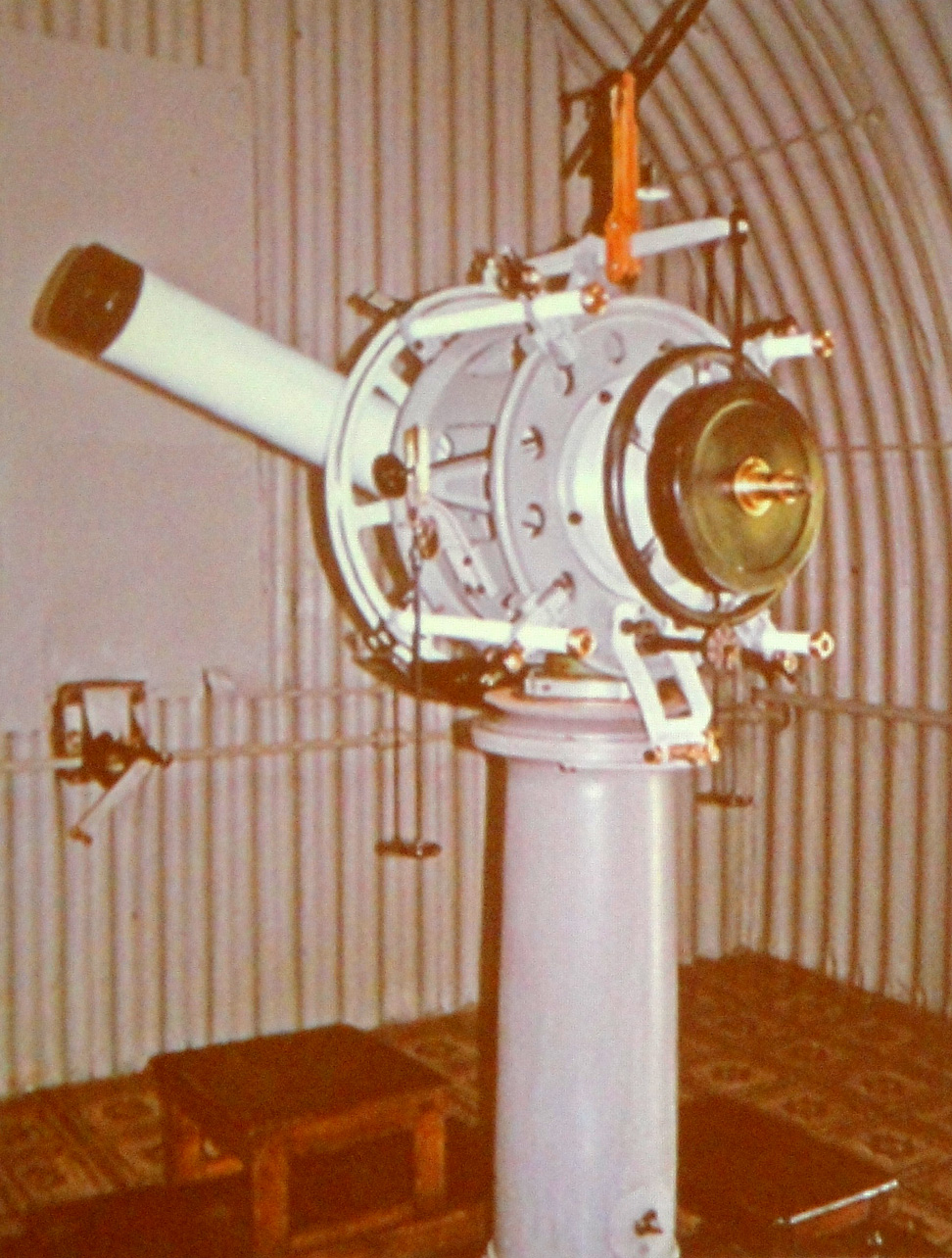 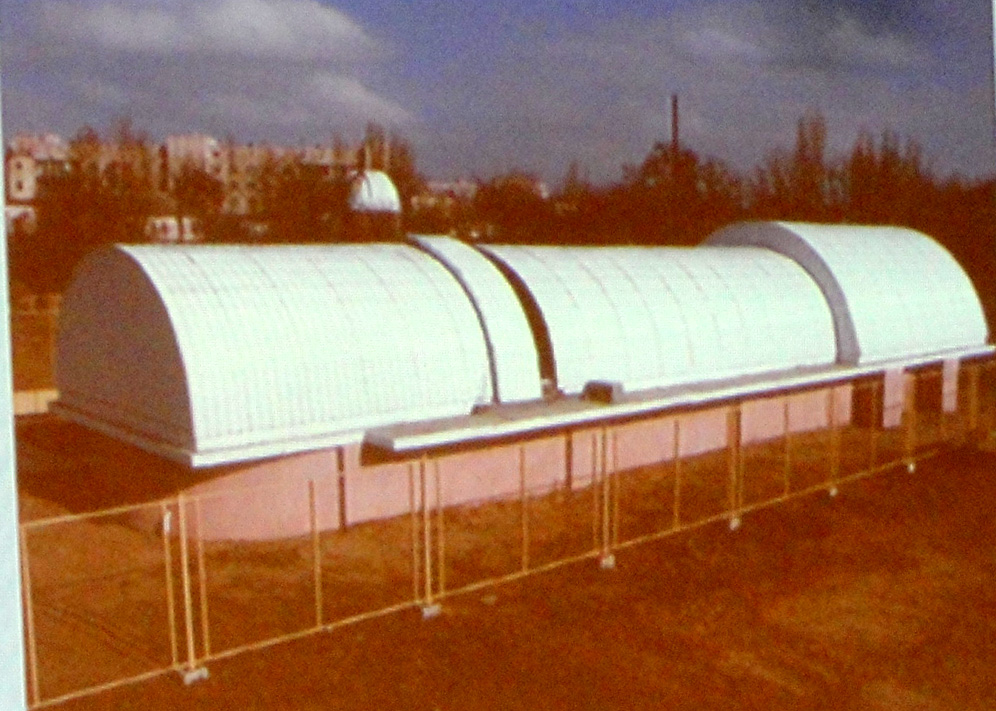 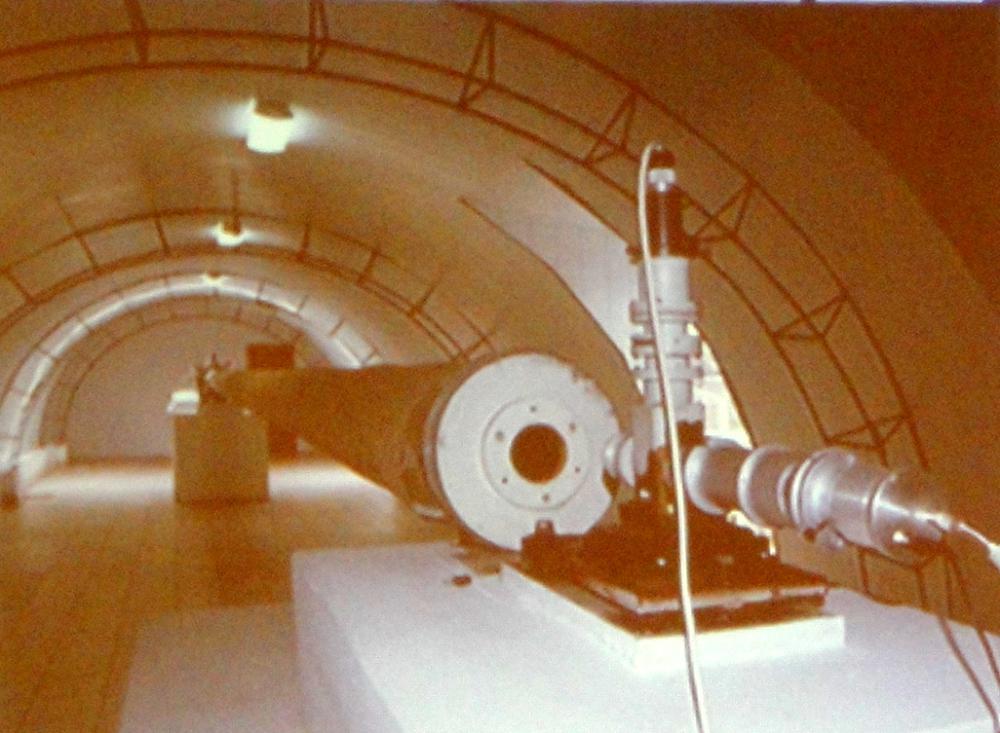 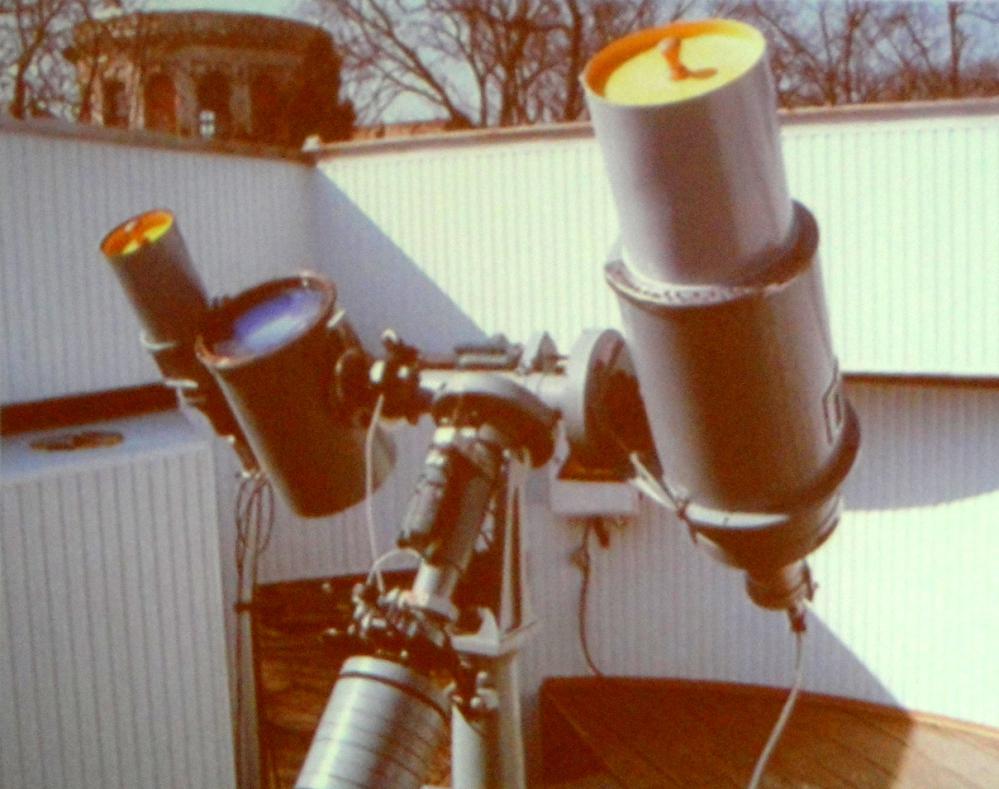 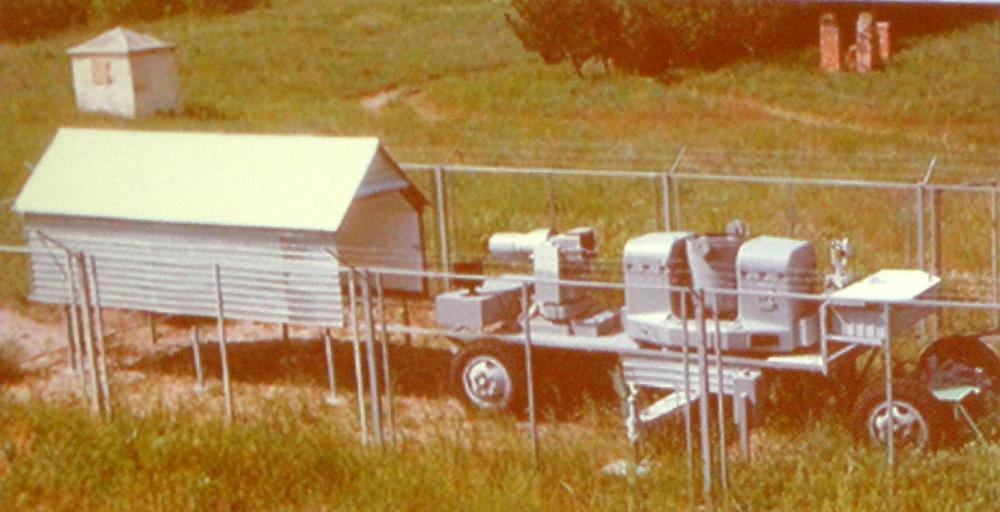 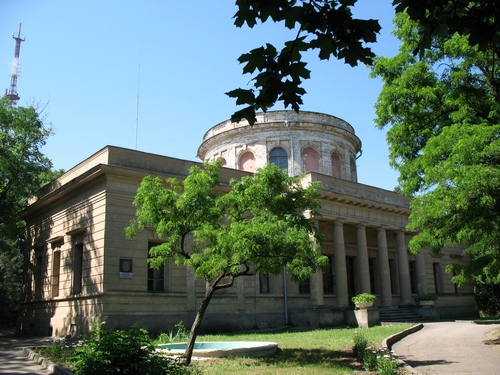 The Nikolaev Astronomical Observatory (NAO) is an historical and astronomical complex with the reserved area of a total of 7.1 hectares; the sciectific and cultural traditions are preserved over two centuries.

In 1992, the observatory became an independent research institute of Ukraine. Today it reports to the State Committee for Science, Innovation and Information.

By the Decree of the Council of Ministers of the Ukrainian RSR JV9 970 of 24 August, 1963, the property is included in the National Inventory of the Monuments of History and Culture as a monument of architecture with national status (State Registry #535). The Mykolaiv Astronomical Observatory was proposed as a World Heritage Site by Ukraine (Ukranian Tentative List of the UNESCO WH #5116, 12/03/2007).

The NAO has a collection of photographic plates, digital databases, astrometric catalogues, and rare books.

The impressive main building with the large round hall and the entrance with six columns is an outstanding architecture, not comparable to other observatories. These initial architectural forms and design ideas are well preserved.
The Nikolaev Naval and Astronomical Observatory has a high level of authenticity and integrity. Original architectural features and instruments (moveable and immoveable), and also tangible and intangible heritage like archive material and photographic plates have been preserved.
During the 19th and 20th centuries more than 40 absolute and different catalogues, made in the NAO, with their accuracy were included in well-known fundamental catalogues like BD, AGK, FK3-FK5. The joint contribution to FK5 of NAO and Pulkovo observatory catalogues was about 36%, an intangible heritage.

no threats, but now the war in the Ukraine!

The Astronomical Observatory is still also used as Marine observatory, but also for the dissemination of the astronomical knowledge to the general public.

The NAO is still used as astronomical observatory with the research topics: 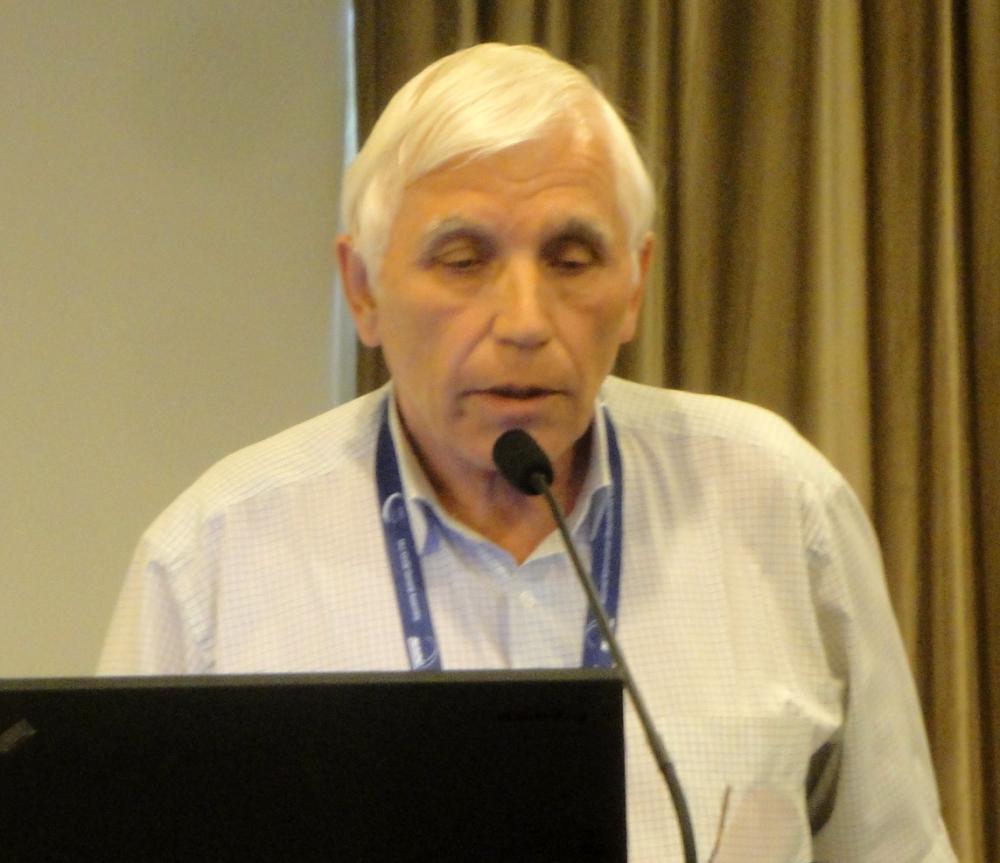