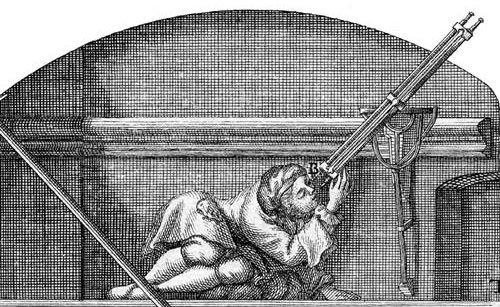 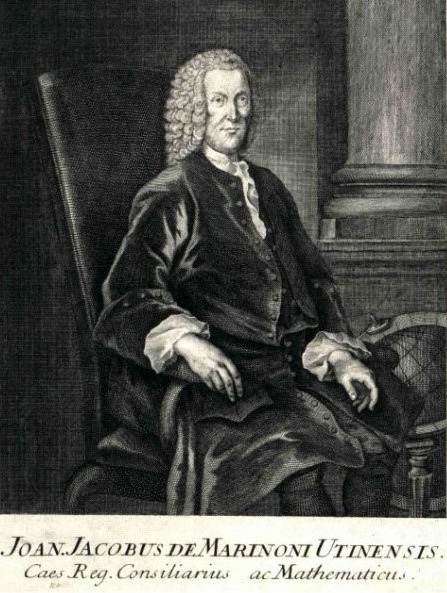 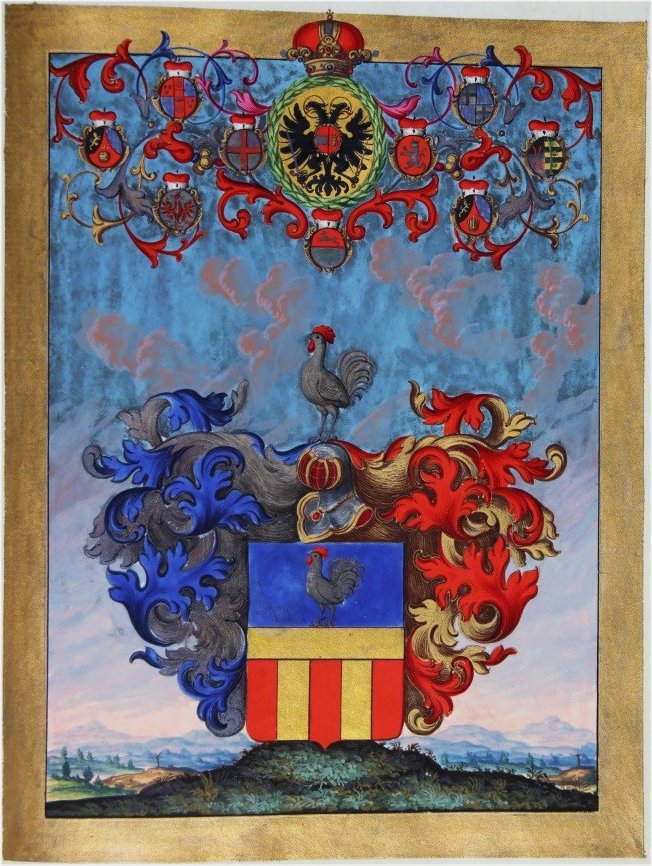 Giovanni Jacopo de [Johann Jakob] Marinoni (1676--1755) was born in Udine. In 1703, Emperor Leopold I gave him the title of court mathematician, which was confirmed by the following rulers Joseph I, Charles VI, and Maria Theresa until the end of his life.

The Imperial court mathematician erected in the 1720s in Vienna with Imperial support on the roof of his house on the Mölkerbastei (medieval bastion) a two-story tower, which he expanded to an observatory. This private observatory, which he describes in detail in his book, was actually the first observatory in Vienna.

Marinoni was knighted on April 9, 1733. Then, on April 22, 1733, Marinoni was appointed head of the Mathematical and Engineering Academy.

Founding of the first Polytechnical School in Central Europe 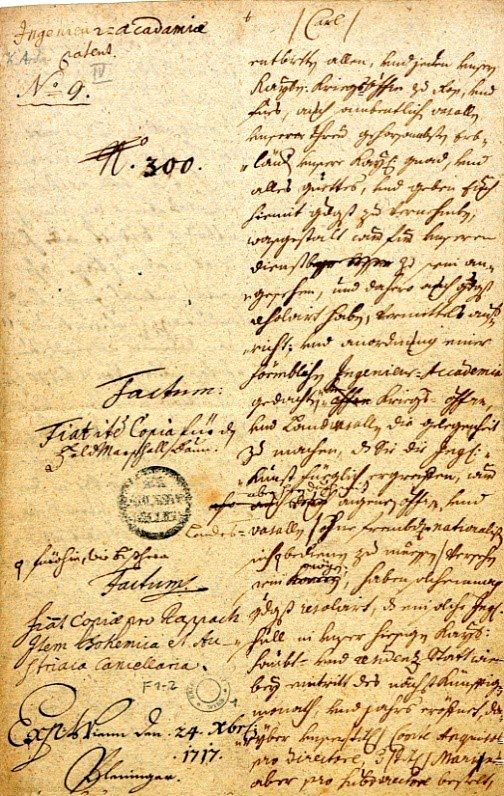 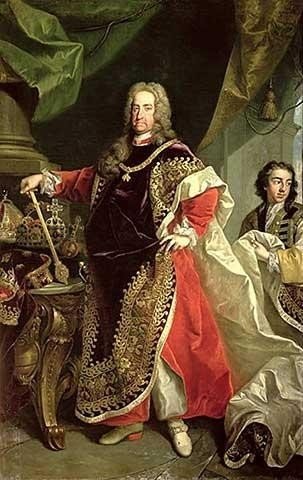 With an Imperial patent, dated December 24, 1717, Charles VI -- on recommendation Leander [Leandro] Anguissola (1653--1720) and Marinoni -- set up the first academy for military and civil engineers in the hereditary lands, later also known as the Mathematical and Engineering Academy, and appointed the proponents to be its directors (König 2017, p. 99 f).

Prince Eugene reports to Emperor Charles VI on May 17, 1718 that 45 students, including noble persons, philosophers and artists, were admitted and what progress they had made. Tuition was free, material expenses were low, but the salaries of the directors for part-time work were quite generous.

Marinoni as Cartographer and Court Mathematician 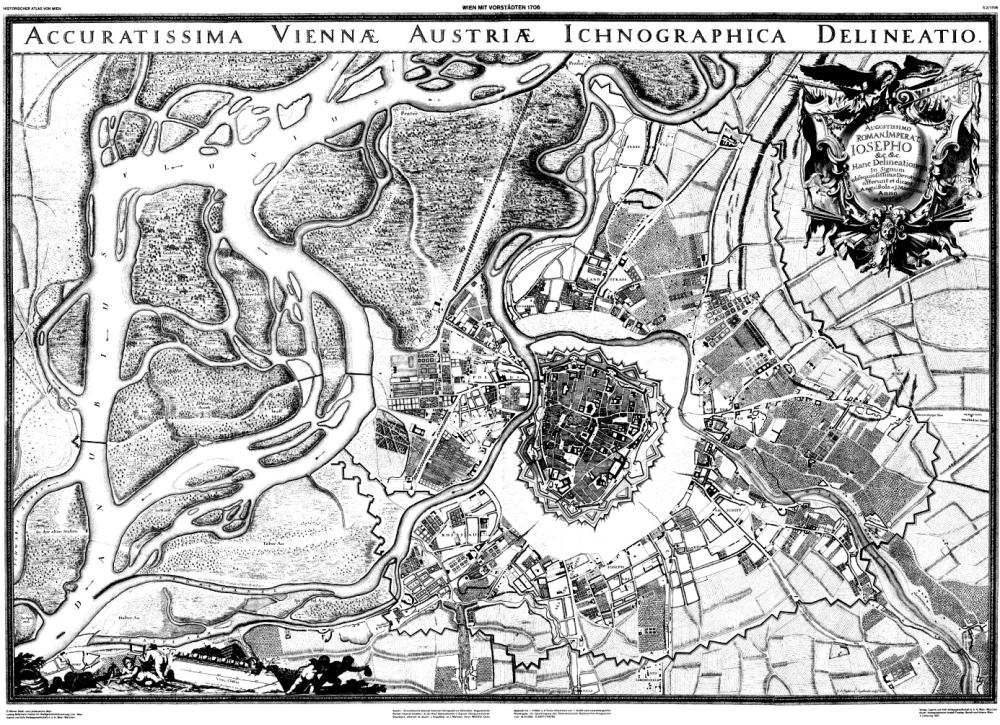 In 1704, Emperor Leopold I commissioned Anguissola and Marinoni to plan the line wall on the outer border of Vienna. In the same year, the famous Anguissola-Marinoni map of Vienna was created with the involvement of the court architect Lukas von Hildebrandt and the city engineer Arnold von Steinhausen (copper engraving 1706, reprint 1710), on which the fortifications are drawn. The inclusion of the suburbs in the truce and jurisdiction of the Imperial Capital and Residence City of Vienna by decree of July 15, 1689 resulted in the need for a city plan of the new, larger Vienna.

Marinoni is justifiably proud of the quality of its map renderings. The 300-year-old Milan cadastre (1719--1729, 16 large map sheets at a scale of 1:72,000) is the first cadastre to be drawn up based on the survey of an entire, contiguous country. In 1777, a copper-engraved map consisting of 9 sheets, reduced to a scale of 1:90,000, was created in Milan ("Carta Topografica dello Stato di Milano seconda la Misura Censuaria"). Marinoni is regarded as a model for the cadastral surveys of the 19th century.

Many of the maps and plans, which Marinoni created under the auspices of the Austrian Imperial family, have survived, and they not only represent a technical masterpiece, but are also priceless cultural assets of unsurpassed beauty. His two masterworks, describing his surveying activites, are "De re ichnographica" (Vienna 1751, Making maps and plans) and "De re ichnometrica" (Vienna 1775, The Surveying Technology). 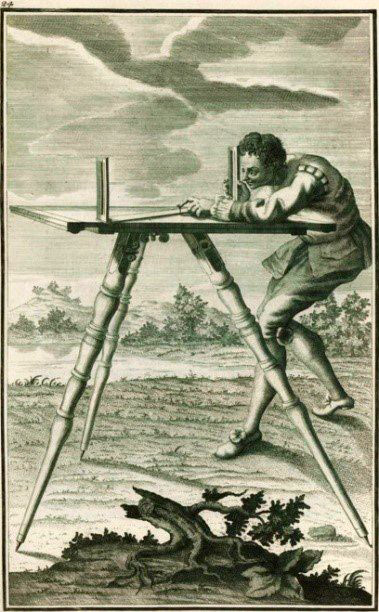 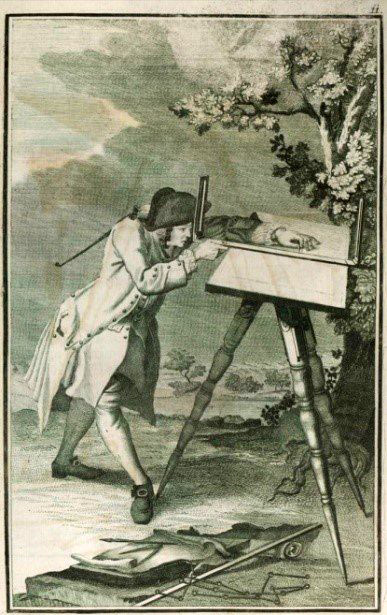 When surveying Vienna, Marinoni used the measuring table, invented by Johannes Prätorius [Johann Richter] (1537--1616), professor of the Nuremberg University in Altdorf. But Marinoni had improved it by fitting a larger table on the top and he used a more stable tripod. Since then, he has used this new measuring table regularly and made constant efforts to perfect it. Finally, in 1714, he constructed the final version with which he carried out the cadastral survey of Milan. His improvements to the measuring table, consisted in enlarging the diopter ruler and also attaching a mountain diopter to it for strongly inclined sights, and he also designed a circular and a linear displacement option for the table top in two mutually perpendicular directions in order to be able to precisely adjust the measuring table over the position. 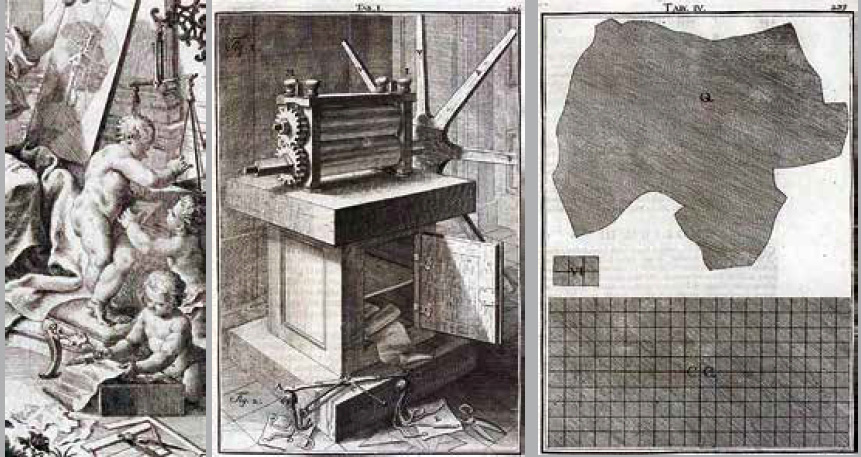 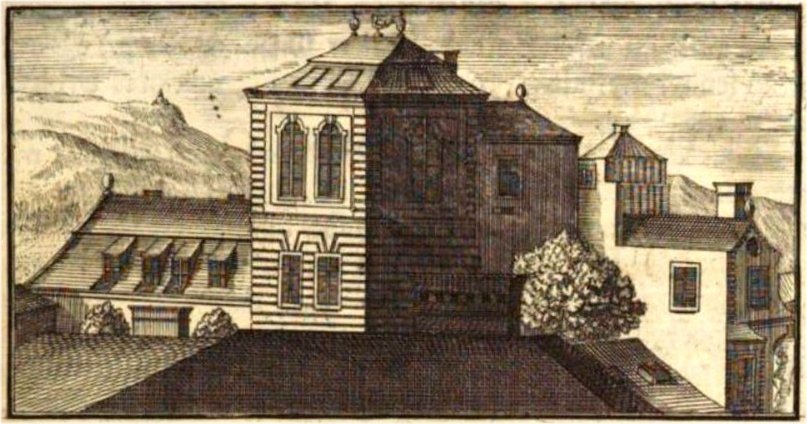 Fig. 5a. The house of the court mathematician Marinoni on the Mölkerbastei with the astronomical observation tower (Marinoni: De astronomica specula domestica, 1745, Liber I, p. 1, ETH-Bibliothek Zürich, Sign.: Rar 8917 q) 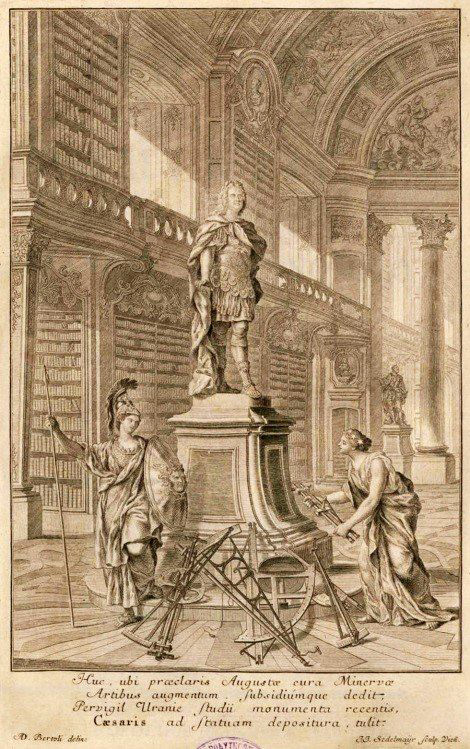 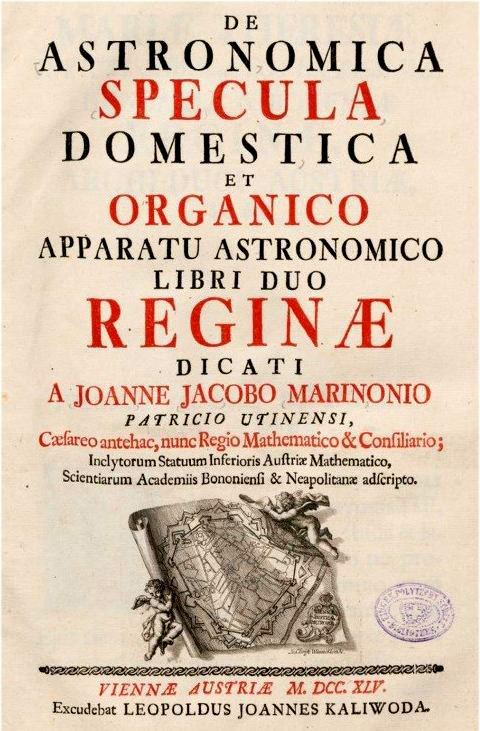 Marinoni had the first observatory in Vienna set up in his private home on the Mölkerbastei in the 1720s, for which he had the most modern observation instruments, purchased at the Emperor’s expense, as he wrote in 1745 in his book De astronomica specula domestica et organico apparatu astronomico libri duo Reginae dicati a Joanne Jacobo Marinonio patricio utinensi, etc. described. In the dedication of De astronomica specula to Maria Theresa, Marinoni first praises the generous support of her late father Charles VI. for its observatory.

Due to the heights of the Vienna Woods (Wiener Wald), the Marinonis Observatory only had lack of horizon view, with the result that rising and setting points of the celestial bodies were often not precisely ascertainable, and there was also fog from the Danube lowlands.
The house is also rotated 45° from the meridian. Marinoni therefore concentrated on positional and transit astronomy, observations of the corresponding altitudes in order to precisely determine the meridian, culmination observations and tracking the Jupiter satellites.
In the description of his observatory in "De astronomica specula domestica", sections of the building illustrate the high windows, the wooden roof beams, the narrow gallery with the iron handrail and the observation pendulum clock.
On the roof of the astronomical tower, there was a weather vane in the form of a rooster, which was also Marinoni’s heraldic animal, connected by a vertical shaft to a pointer that showed the wind direction on a compass rose on the ceiling of the main room of the observatory, which could be read without having to go outside. 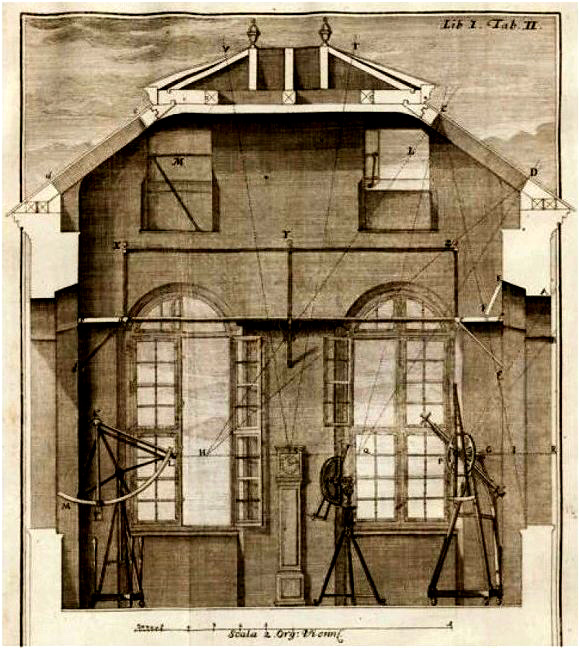 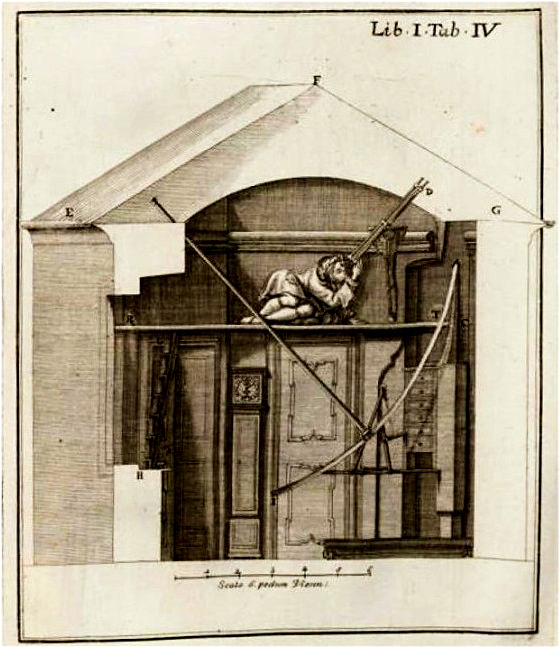 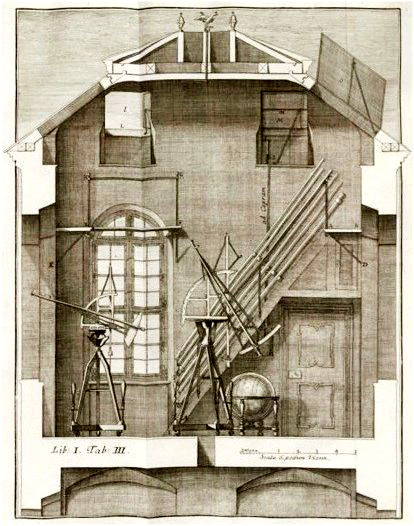 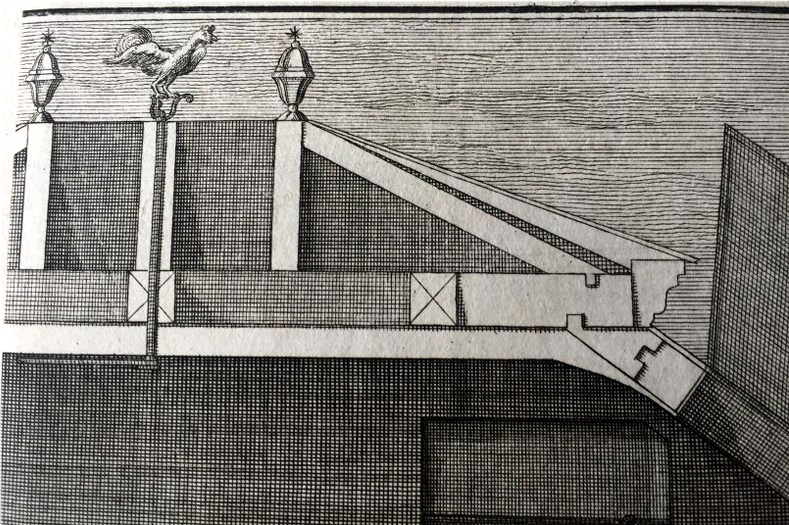 The telescope for transit observations of fixed stars is notable for its extraordinarily stable and meticulous design, which gives Marinoni good marks as an engineer. Marinoni also constructed entirely new quadrants for the southern and northern meridian. In addition to the built-in instruments, Marinoni also had portable devices for astronomical purposes, and geodetic instruments.

The exact clocks made in London, Paris and Vienna were also of great importance. In particular, the pendulum clock from Paris was a special "equatorial clock" which, in addition to the mean solar time, also displayed the true solar time by means of a own scale. This scale was controlled by a cam disk, which took into account the difference between mean and true solar time of up to approx. ±16 minutes (Equation of Time).

Altogether Marinoni describes 19 instruments: 2 heavy, iron meridian mural quadrants, 1 transit instrument, 3 pendulum clocks, 5 larger transportable quadrants, 4 smaller transportable goniometers, 6 telescopes, 1 celestial globe with a diameter of 24-inch = 63.2cm, made by Joan Blaeu (1596--1673).
The instruments were equipped with the best screw or thread micrometers. The richness and quality of the furnishings can be explained by the fact that the emperor paid quite a bit for the training of his engineers, officers and master builders. 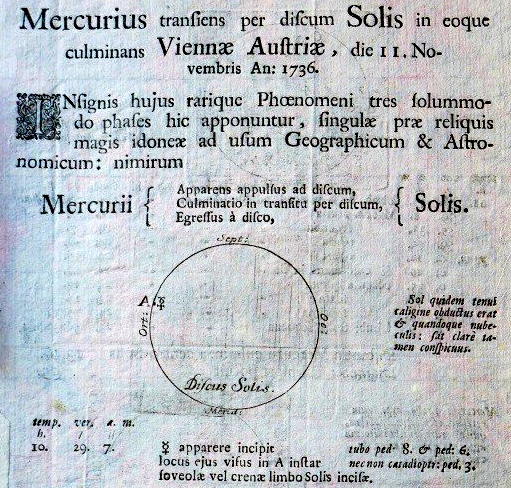 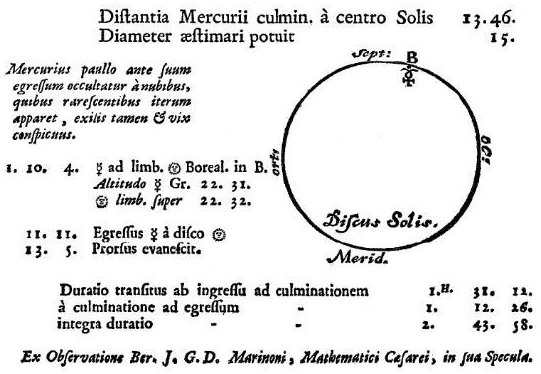 The description of his observatory made Marinoni famous throughout Europe and he corresponded with all the luminaries of his time. Marinoni observed the Mercury transit in Vienna on November 11, 1736. His observation report "Mercurius transiens per discum Solis" was published in 1738 in the monthly journal Mémoires pour l’histoire des sciences et des beaux-arts. 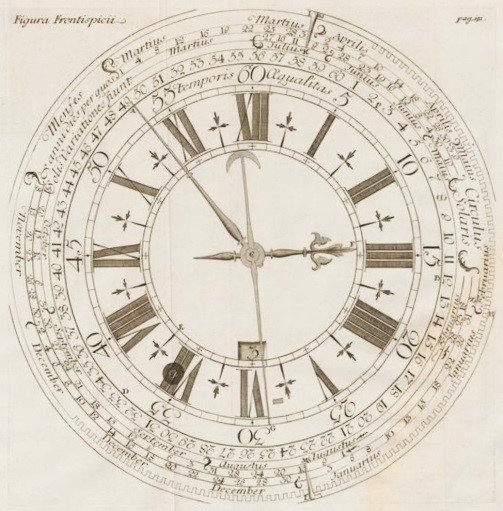 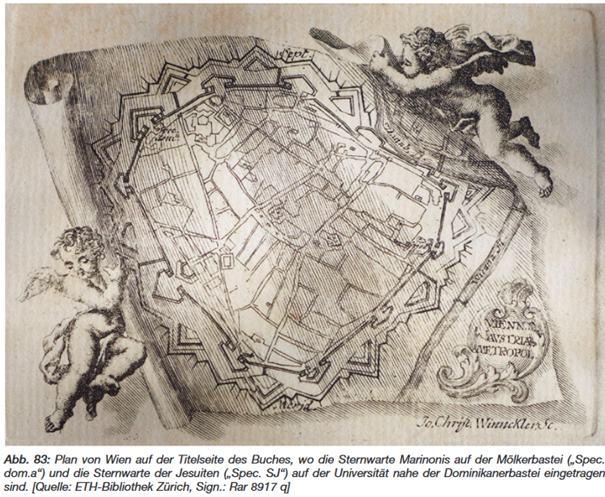 Fig. 9a. Map of Vienna, where the Marinonis observatory on the Mölkerbastei (Spec. dom. a) and the observatory of the Jesuit College (Spec. SJ) near the Dominican bastion are marked (Marinoni: De astronomica specula domestica, 1745, ETH-Bibliothek Zürich, Sign.: Rar 8917 q) 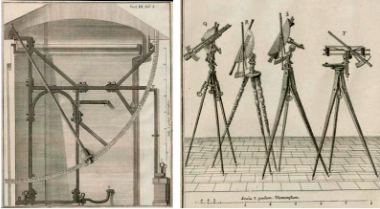 Giovanni Giacomo Marinoni’s merits are: He was appointed as court mathematician (1703), director of the Mathematical and Engineering Academy (1717), one of the first Polytechnical Schools in Europe, in addition, he was cartographer of Vienna (Anguissola-Marinoni map of Vienna, 1704) and of Milan (cadastral land register, 1719--1729), and published surveying books: "De re ichnographica" (Vienna 1751) and "De re ichnometrica" (Vienna 1775).
As astronomer, Marinoni published De astronomica specula domestica (1745) with a detailed description of his private observatory on Mölkerbastei, sponsered by the Imperial court, and of his collection of astronomical and geodetical instruments. He was active in positional and transit astronomy, observations of the Jupiter satellites, and the Transit of Mercury (1736), published as "Mercurius transiens per discum Solis" (1738).Marinoni had good contacts to famous astronomers all over Europe (Hiermanseder & König, 2020) and corresponded with e.g. Leonhard Euler (1707--1783), Gottfried Wilhelm (von) Leibniz (1646--1716), Pierre Louis Moreau de Maupertuis (1698--1759), Joseph-Nicolas Delisle (1688--1768), Christfried Kirch (1694--1740) oder Sámuel Mikovíny (1686/98--1750). Marinoni was external member of the Royal Prussian Society of Sciences (1746), and honorary member of the Russian Academy of Sciences in Saint Petersburg (1746). 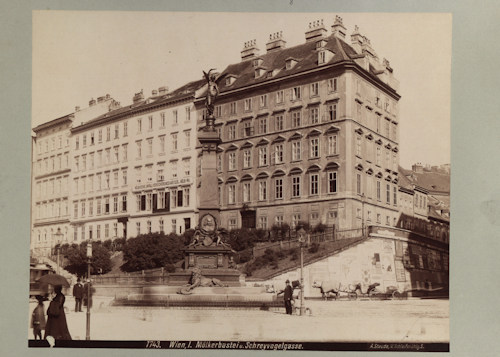 The Marinoni Observatory (Mölkerbastei 8) is no longer existing.
It is replaced by the Pasqualati house (1797), built on the ramp of the former town fortifications (Mölker bastion). The architect was Peter Mollner (1732--1801), who erected the Pasqualati house for Empress Maria Theresa’s personal physician, Joseph Benedikt, Baron Pasqualati von Osterberg (1733--1799); it was a residence of Ludwig van Beethoven between 1804 and 1814.

The Marinoni Observatory is no longer existing.

No astronomical relevance today, but Marinoni’s publications show his merits in astronomy and cartography. 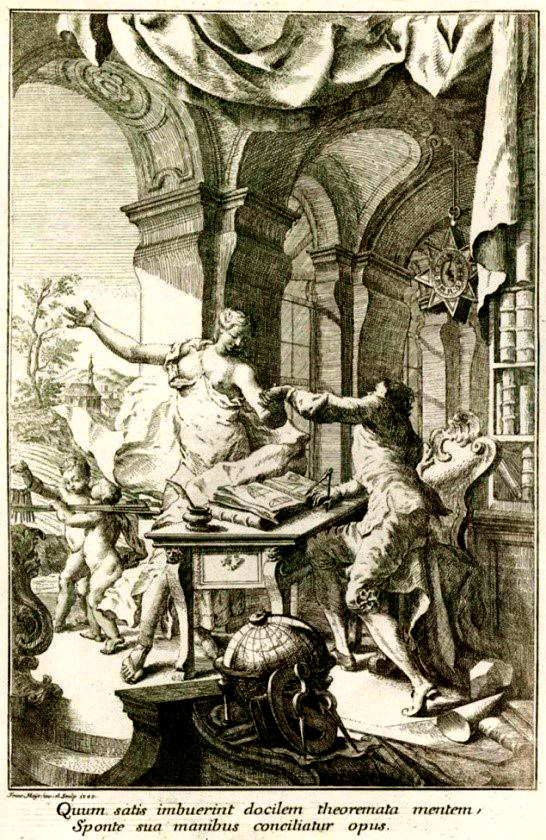 Fig. 11a. Frontispiece of Marinoni’s book "De re ichnographica" (1751), Marinoni, inspired by "Mathematica", led out into the landscape in order to take measurements (Quelle: ETH-Bibliothek Zürich, Sign.: Rar 771 q) 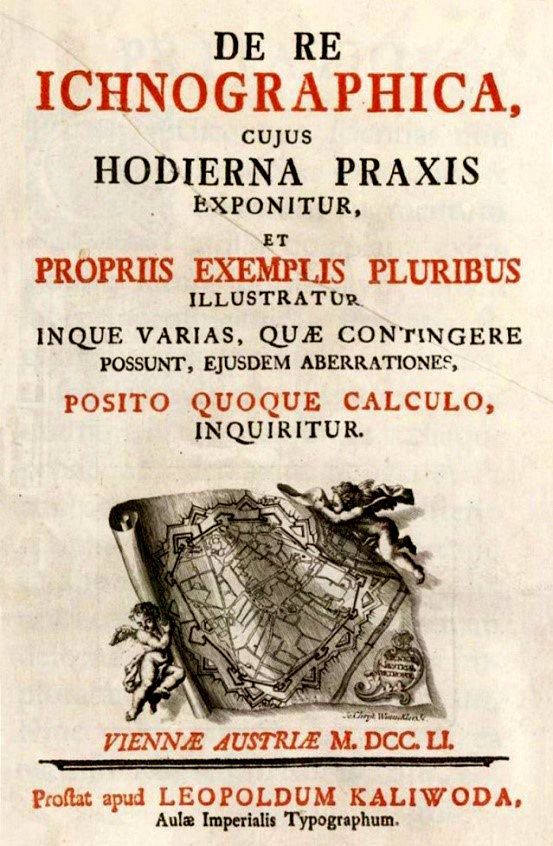 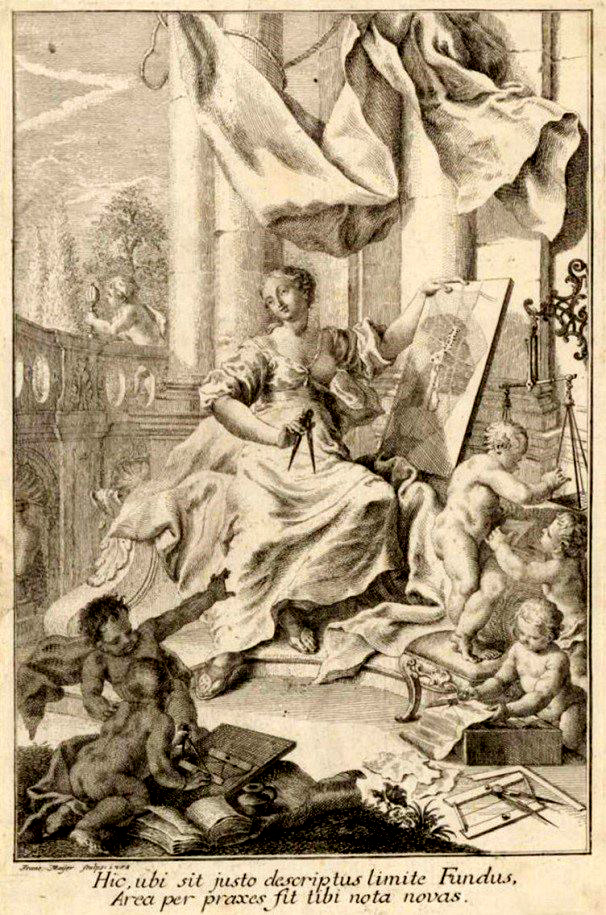 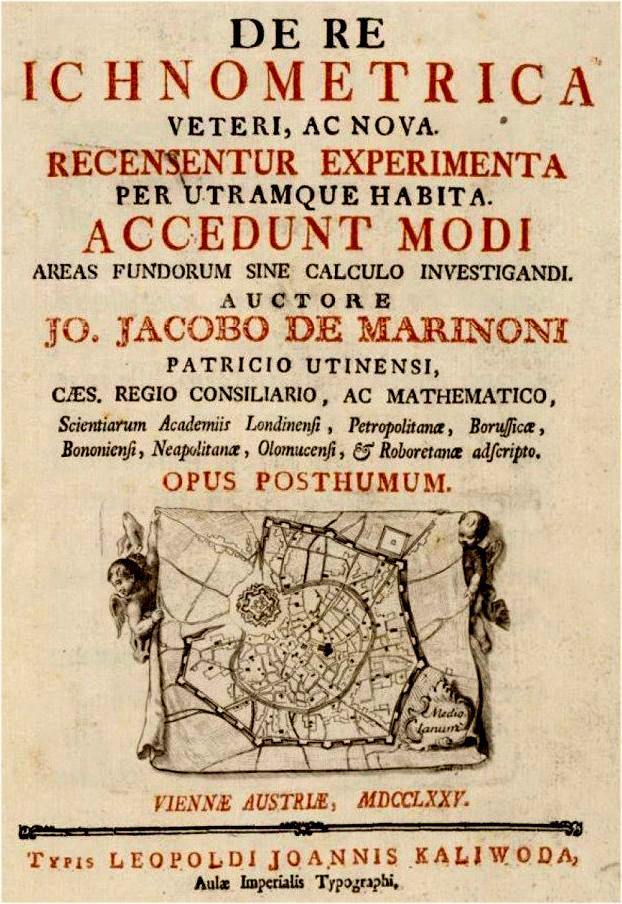