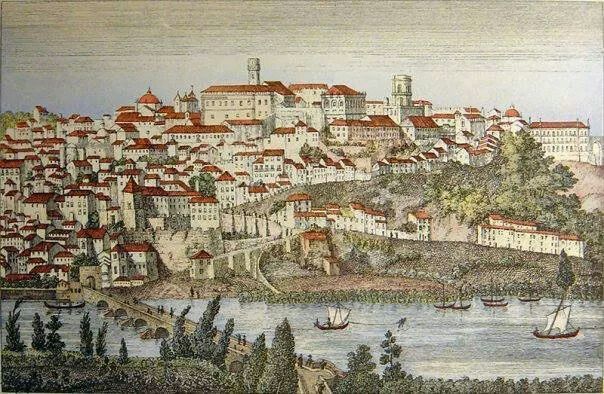 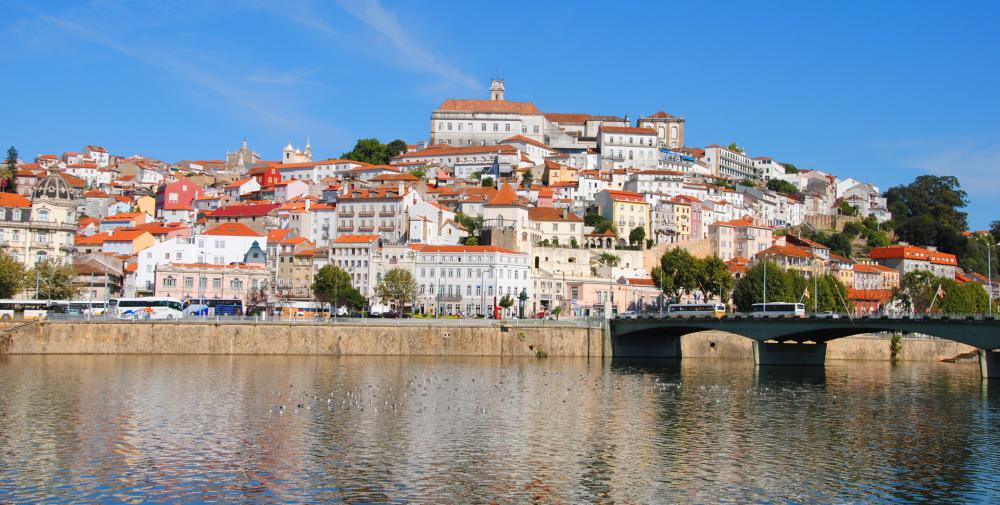 Fig. 1b. Coimbra Castle, where the observatory was erected in 1790 (Wikipedia, CC2, Leandro Neumann Ciuffo)

Sebastião José de Carvalho e Melo, 1st Marquis of Pombal and 1st Count of Oeiras (1699--1782), known as the Marquis of Pombal, expelled the Jesuits in 1759, created secular school system, and started the Coimbra University reform in 1772. Thus, he created the modern scientific education in Portugal (for the Faculty of Natural Philosophy a Physics Cabinet, Chemistry Laboratory, Natural Histroy Cabinet, and Botanic Garden was planned), in the Faculty of Mathematics an astronomical observatory was planned for the site of the Castle - with the following construction guidelines:

Instrumentation: the observatory should be immediatedly supplied with a collection of qualitiy instruments. 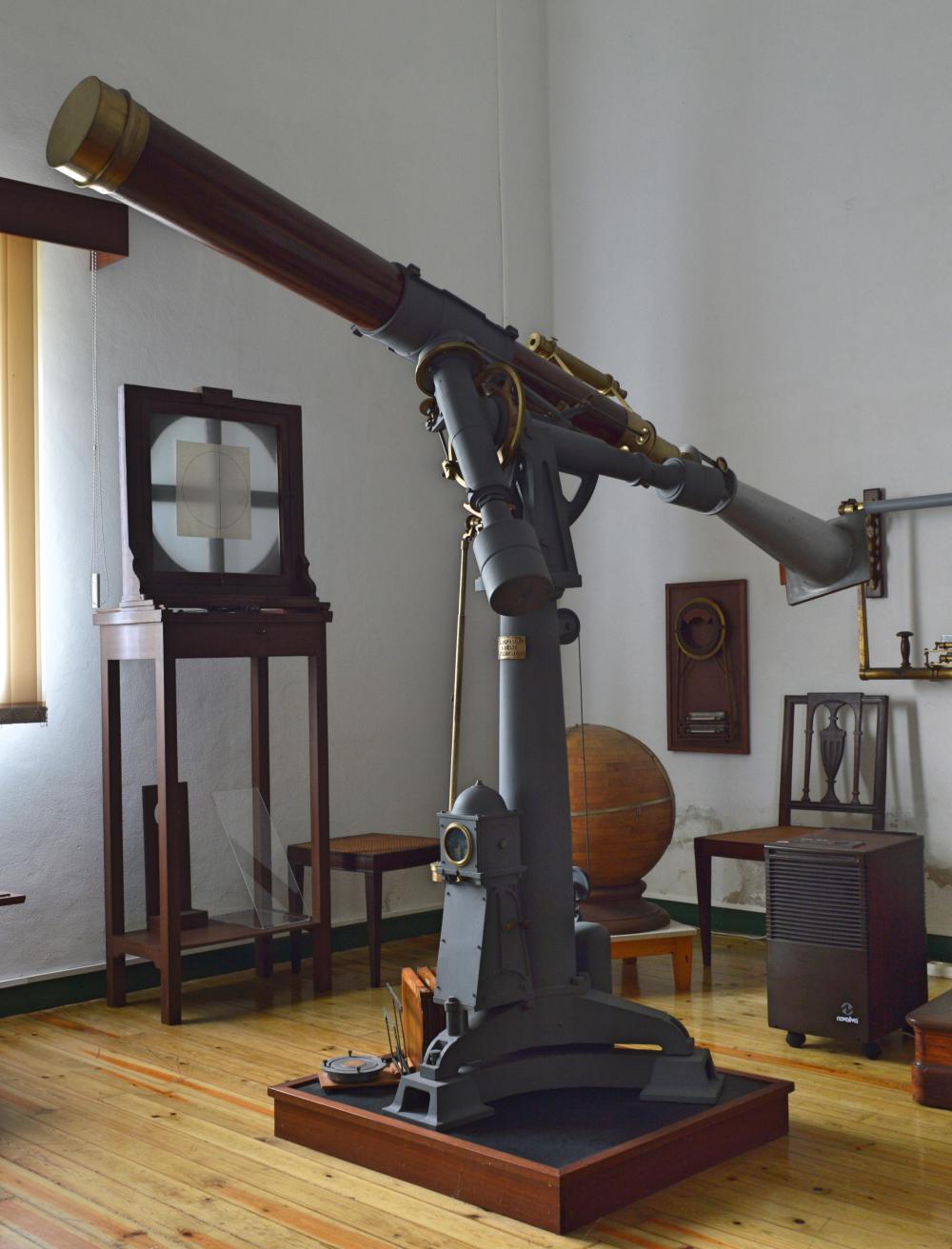 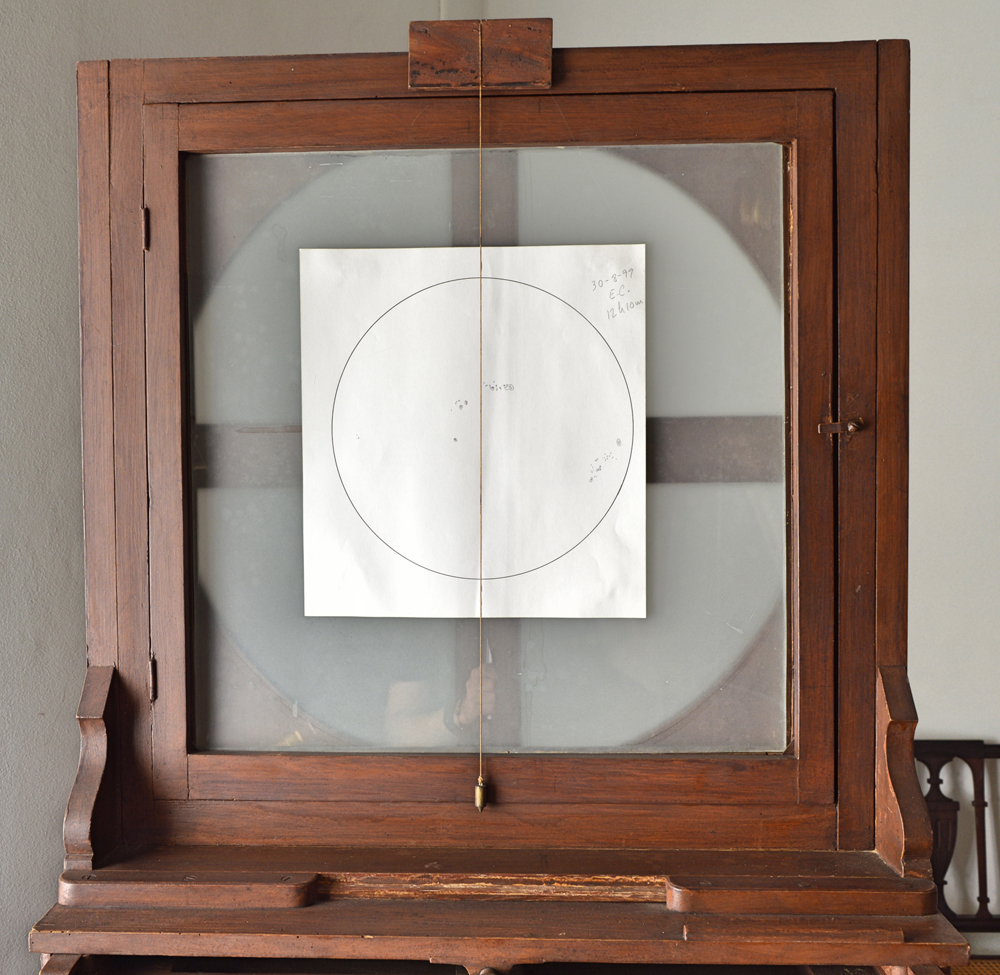 Instruments of the first Observatory 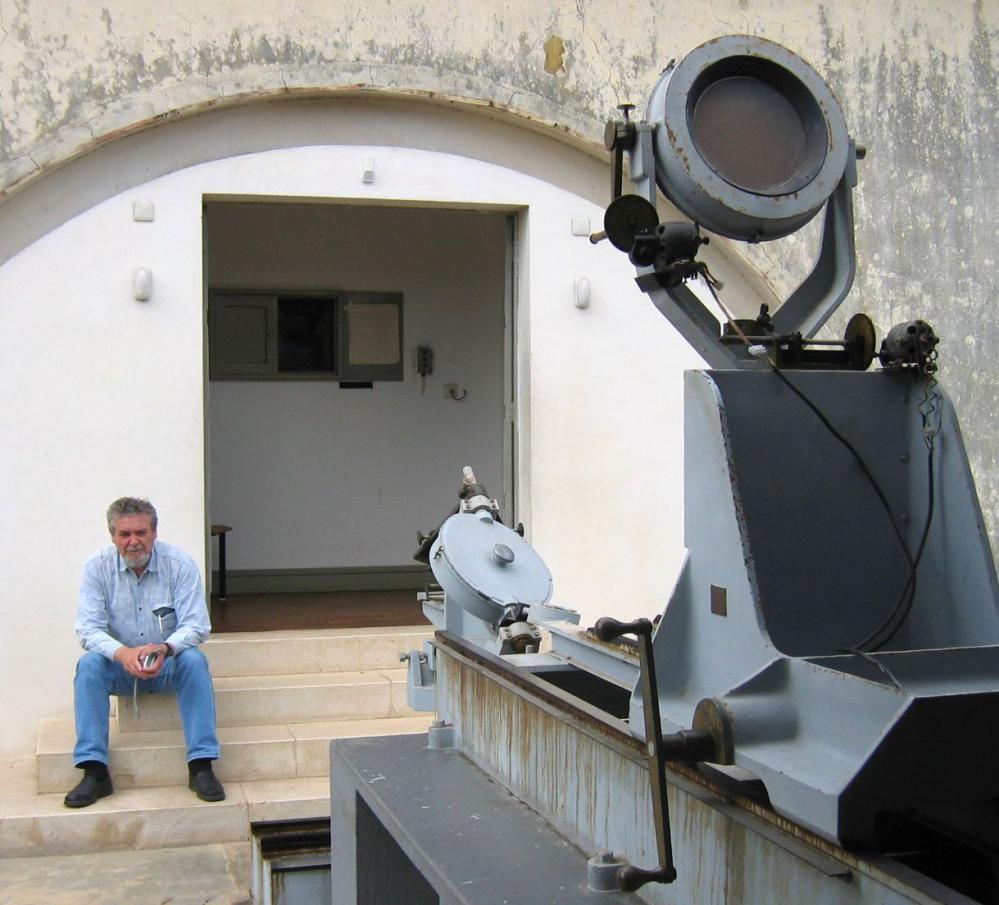 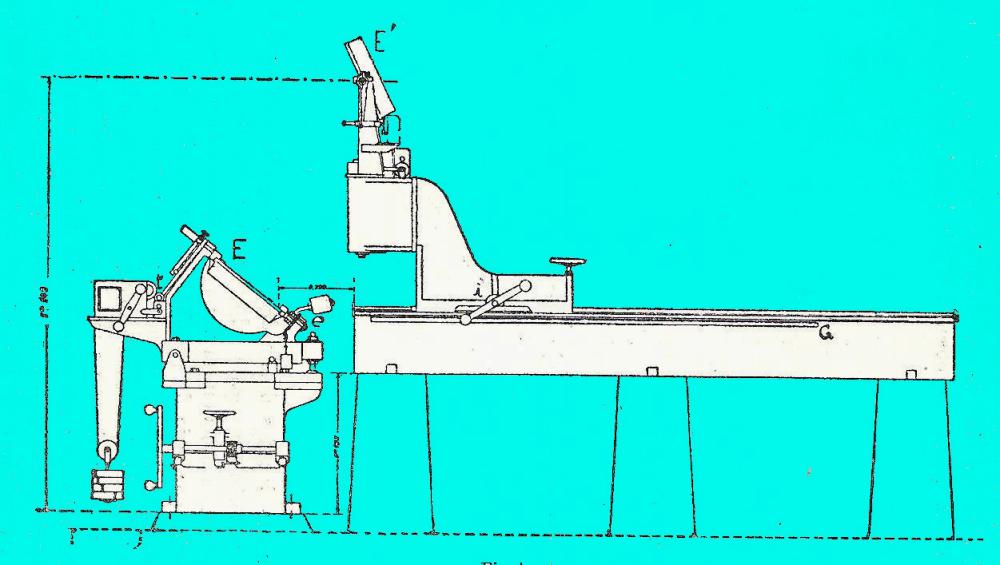 In addition to astronomy, in the 1860s, atmospheric and geomagnetic / geophysical phenomena were studied, a meteorological and magnetic observatories were started.

Jacinto António de Sousa (1818--1880) was called as Professor in the Philosophy Faculty at the University of Coimbra; after visiting the observatories of Madrid, Paris, Brussels, London, Greenwich and Kew, a Meteorological Observatory was built in 1864; the model was Kew Observatory.
Also the Magnetic Observatory of Coimbra (COI), founded in 1864, is one of the oldest observatories in operation in the world; the geomagnetic measurements started in 1866 in the earliest observatory located in the "Instituto Geofisico of University of Coimbra" (IGUC). In 1932, the magnetic observatory was transferred to the present site, Alto da Baleia, about 2.5 km from the city centre; observations started in 1951. The classical instruments (photographic recording variometers, Askania declinometer, QHM and BMZ) were replaced in 2007 with the modern ones (FGE variometers, DIM and GSM90F) (Ribeiro 2009).

The original observatory building (1790) is no longer existing; it was demolished in 1951.

Regarding the research topic, Coimbra Observatory is comparable with the famous solar observatories in the world, like cf. Paris-Meudon, Royal Greenwich Observatory, Kodaikanal Solar Observatory, India or Mt Wilson, USA.

The old observatory building existed until 1951, then the observatory was moved to Santa Clara.
Some historical scientific instruments are in the Museu da Ciência,  Universidade de Coimbra. 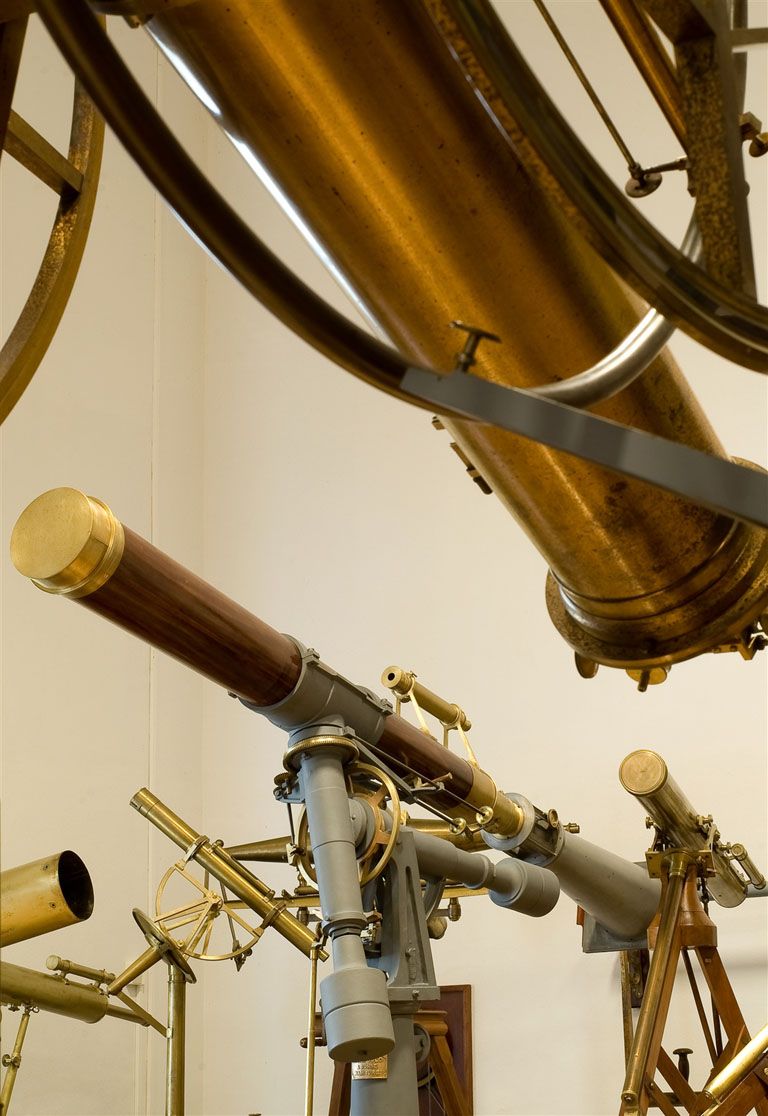 At the Geophysical and Astronomical Observatory of the University of Coimbra, both the modern scientific research, focused on the study of the solar system, and the promotion of science and the science outreach of the fields of knowledge which are related to it are in the same space.

An important activity is the conservation of glass plates negatives at the Geophysical and Astronomical Observatory of the University of Coimbra, see Mariana Brum (2022): 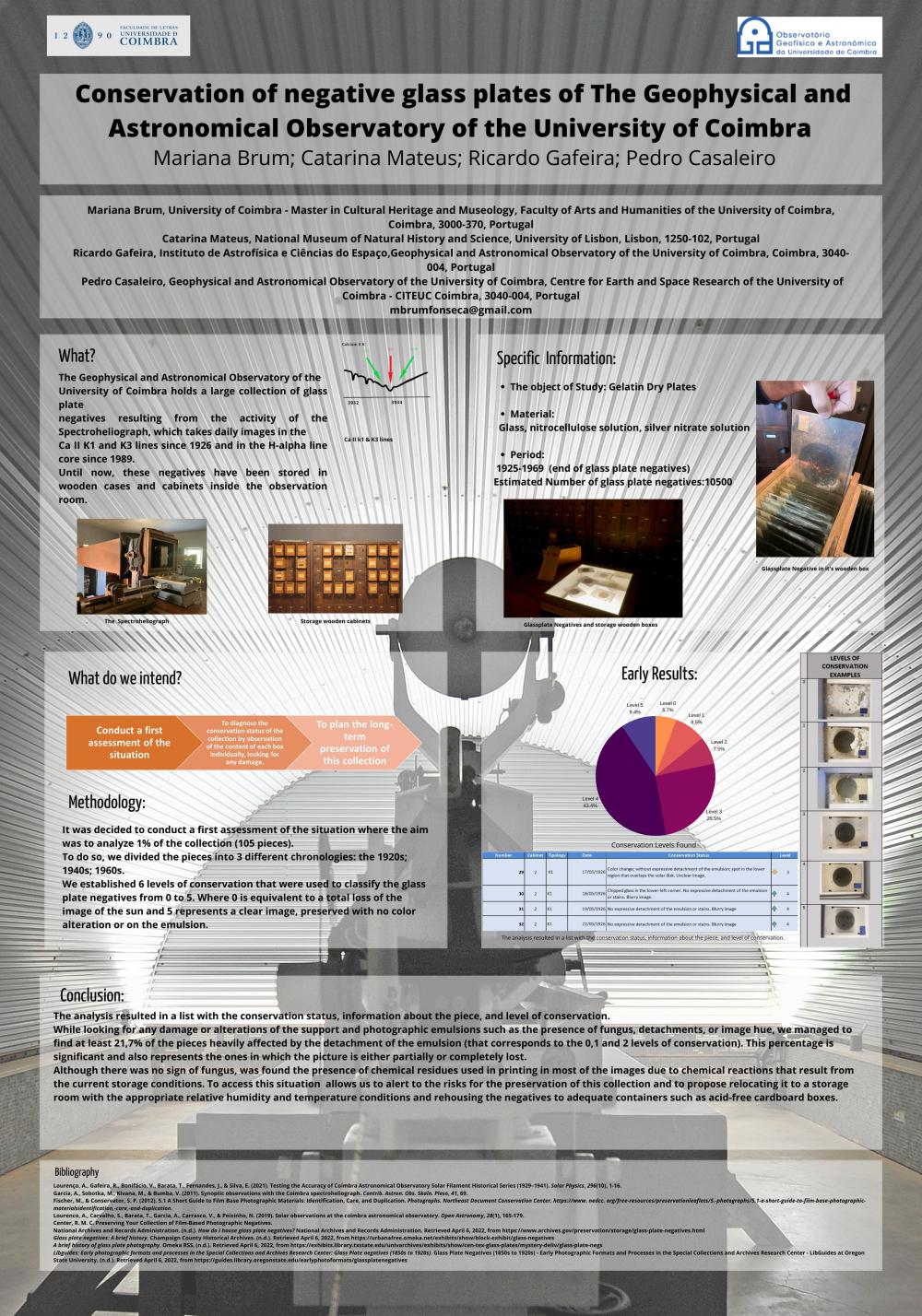